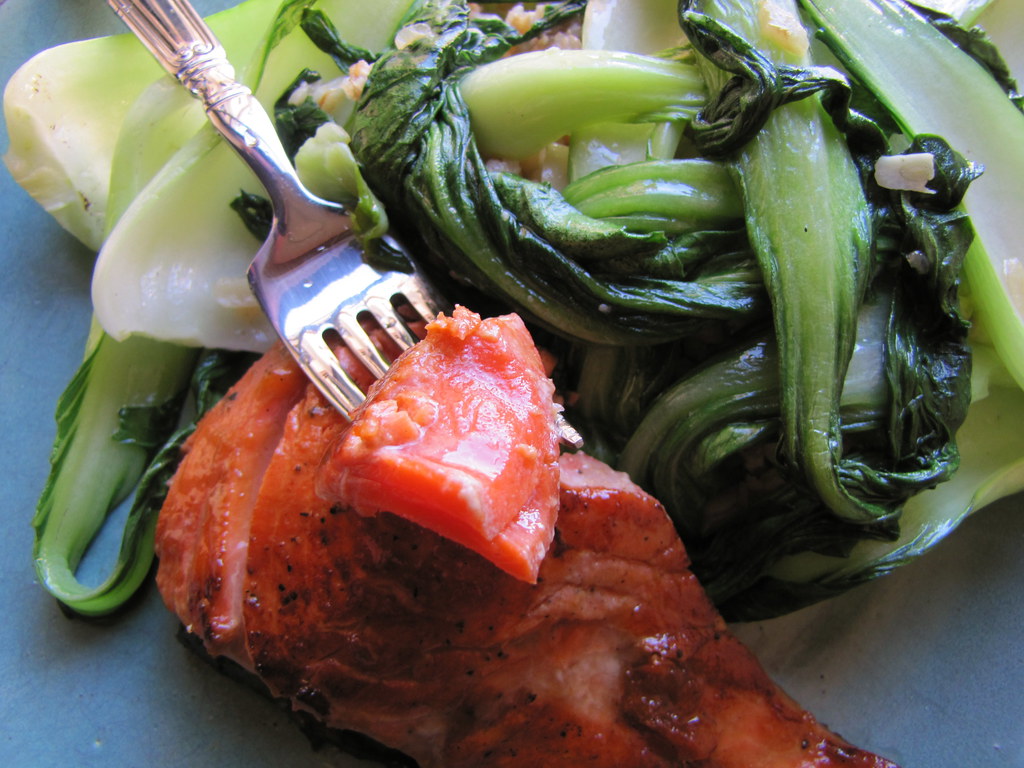 I can’t think of too many other proteins you can’t try this same dish out on — whether it be fish, a pork chop, or a hunk of firm tofu. It’s simple: a seared steak (of some sort) brushed with a little sauce while it finishes in the oven. But I’m lucky, because the protein I have most readily on hand happens to be wild-caught Alaskan sockeye salmon.


Ever since I gave into that salmon CSA, it’s been salmon du jour whenever company was around. And not just any salmon, but meaty, intense red and flavorful wild salmon, caught by some now-friends off the coast of the Washington state. I wrote about getting a stash of their catch on Lunch at Sixpoint, and have another fillet curing right now in the fridge. Often, I’ve made a dish that was more or less like this, but without the apricot sauce at the last step. I think this adds a little something extra, without taking away from the pure joy of the fish. 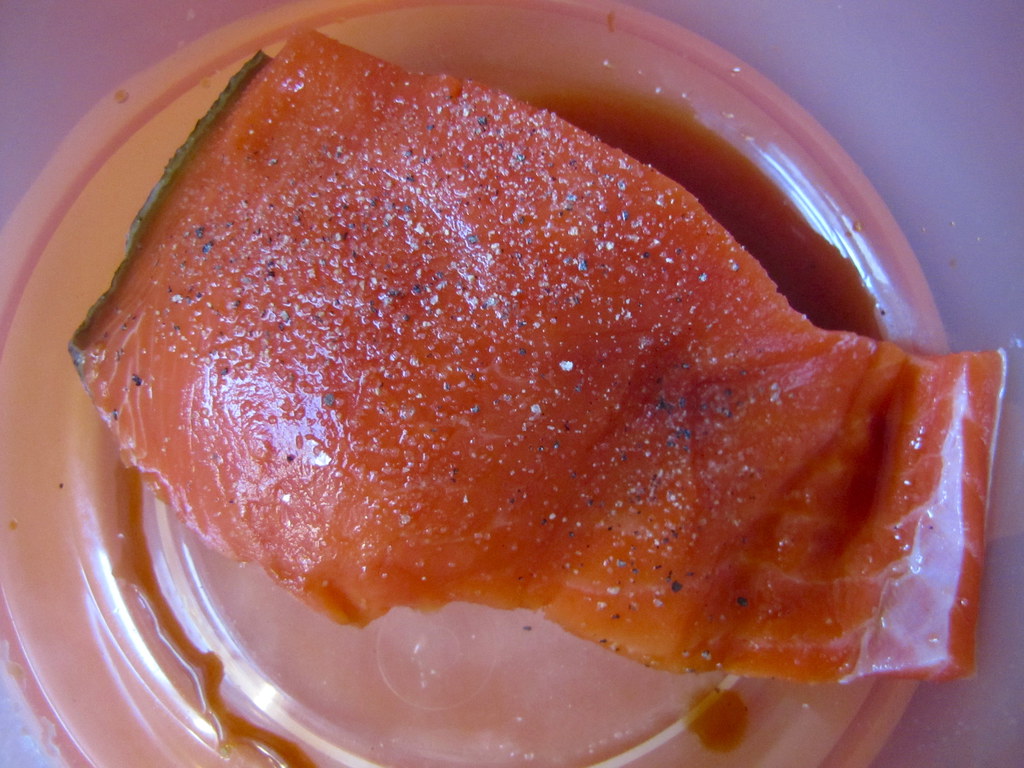 salmon gets a quick marinade in the fridge 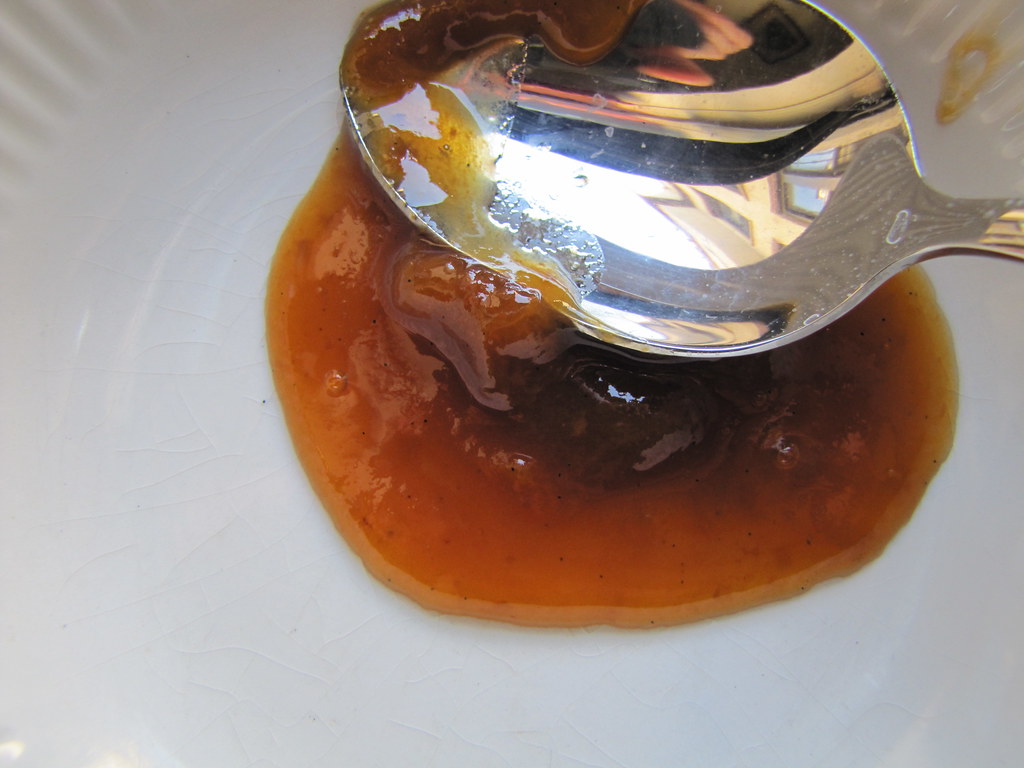 while an apricot jam-based glaze is mixed up

Or, whatever you’re cooking. Just mix a dollop of apricot preserves with a splash of soy sauce and oil, and adjust if you wish. Needs a little salt? Go ahead and add some. Like a salad dressing, if it tastes how you want it to later on with your food, you’re set. I like to marinate the fish in salt, pepper and a little soy sauce while prepping everything else, too, so keep this seasoning step in mind as you make the final one. 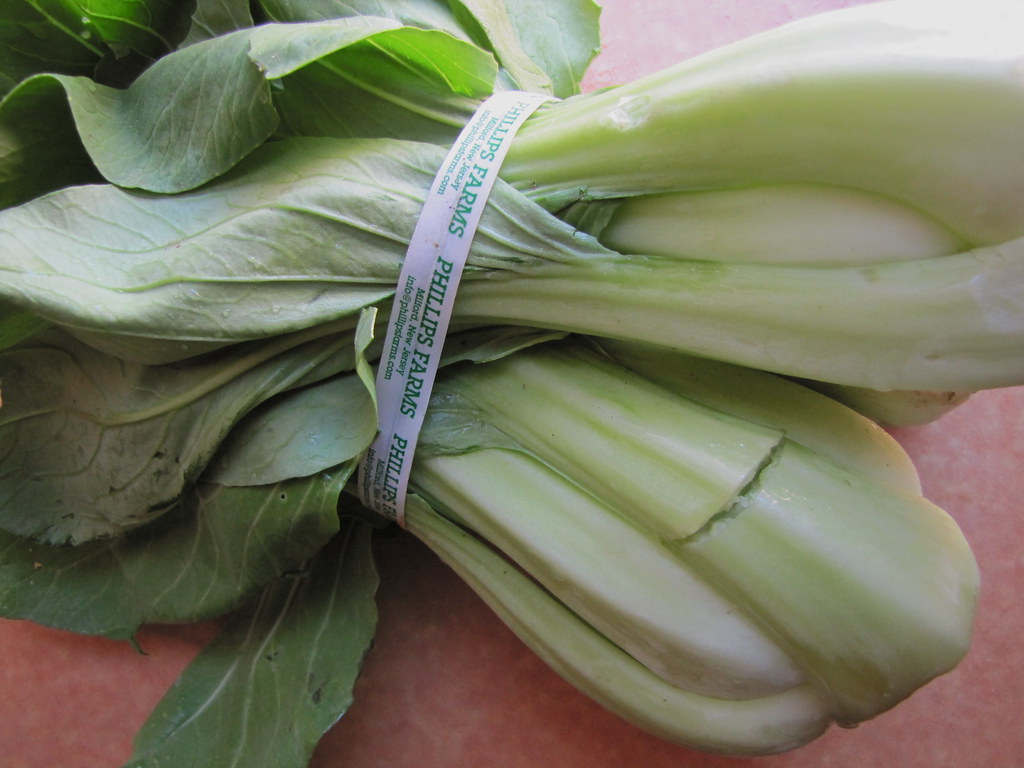 a bunch of bok choy from the Greenmarket 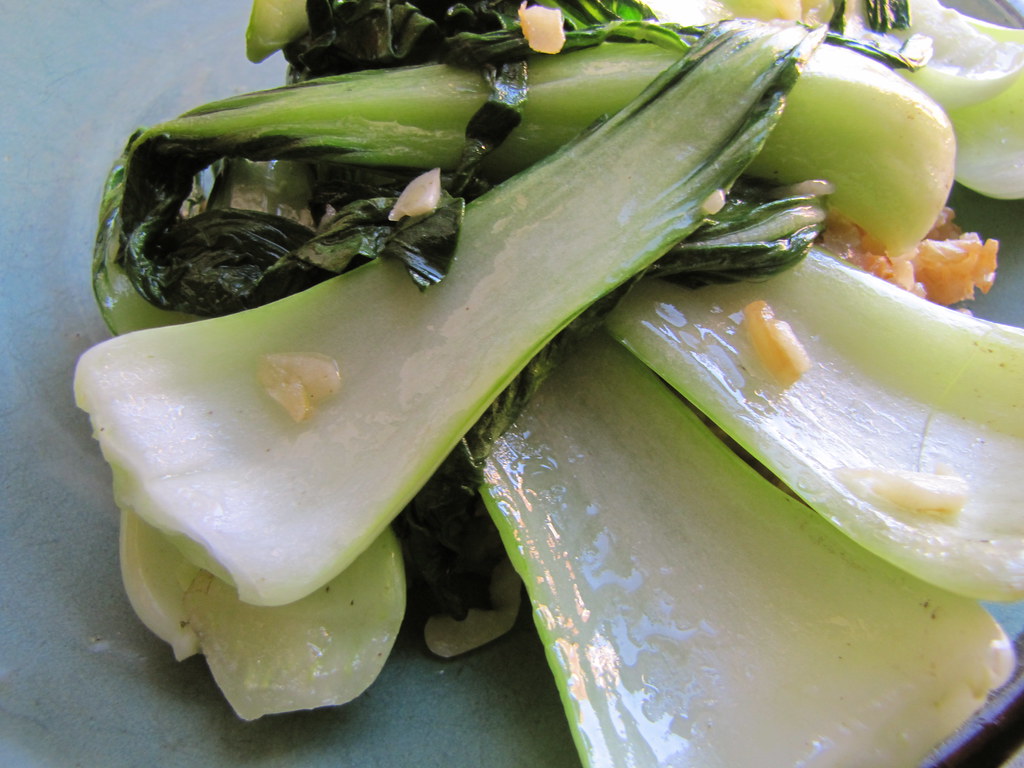 once stir-fried with garlic

To serve, this sort-of Asian dish seems to call for bok choy and rice. Bok choy is one of those veggies that I can eat a pile of, just sauteed with garlic, and another, and another… and never feel full. And that’s a compliment. The crunchy wateriness of the stalks and the salty, spongy greens keeps me entertained as I eat, and I come away feeling refreshed. A big mess of spinach wouldn’t have quite the same effect. While both are vigorously vitamin-rich, if you’re looking to free yourself from mono-textured tedium, I encourage you to try out this leafy green. And while you’re at it, don’t chop it up, but bite it with your teeth and slurp the rest like a noodle, like the Chinese do. I’ve seen way too many people fumble with a knife and fork eating bok choy at Chinese restaurants because it wasn’t cut up (same goes for Chinese broccoli, which has dense, cylindrical stalks that are delightful to bite). 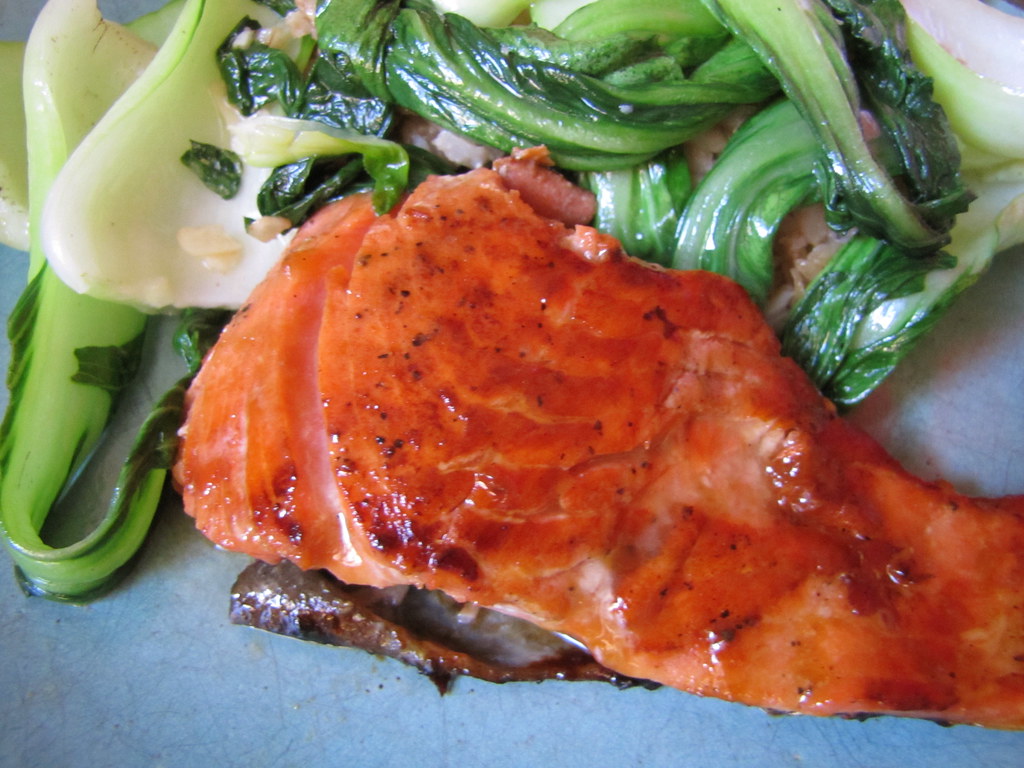 A bed of plain brown rice to balance out all the flavors on the plate, and this dish is a done deal. Just beware of inhaling your food with this one, as I unfortunately did.

Season the salmon with a pinch of salt and pepper, and about 2 teaspoons of soy sauce. Cover and refrigerate while you prepare the rest of the ingredients (about 15 minutes, or up to 2 hours).

Cook the rice. Preheat oven to 375 degrees. In a small bowl, combine the apricot preserves, remaining teaspoon of soy sauce and 1 teaspoon of oil and set aside.

Heat about 1 tablespoon of the oil in a wide, heavy-bottomed, oven-safe saucepan and add the garlic once it just begins to pop. Add the bok choy and stir-fry for about 2 minutes. Remove from pan and clean thoroughly. Add another tablespoon of oil and place salmon steaks down skin side-up. Let brown for 1-2 minutes. Flip, and brush the apricot sauce on the browned side. Transfer to the oven to cook through, about 5 minutes (depending on the size of the steaks). Serve alongside the bokchoy on the steamed rice.

Six brownie points: This dish will certainly wet your whistle if you’re looking to eat meat, as it’s rich and fatty, with lots of flavor. That’s just the nature of wild sockeye salmon, but along with it comes lots of protein and the highest concentration of omega-3 fatty acids as far as seafood goes, where this valuable nutrient is prevalent. The mild bok choy will help level out all the cholesterol, too, with its plentiful Vitamin C, Vitamin A and calcium. Especially when you prepare this with more bok choy than the fish, or anything else on the plate.

Six maple leaves: If you’re not from the Pacific Northwest, you can still get freshly-caught salmon. But this region is the only sustainably-maintained fishery for the species according to Seafood Watch. Most salmon is farmed today, which can lead to all sorts of health and food-safety red flags (in addition to not tasting as good). You’ll notice the steep pricetag for this salmon, because it isn’t. While the garlic and bok choy were local farmers’ market finds, the rest were purely (non-local) pantry items, like dried rice.