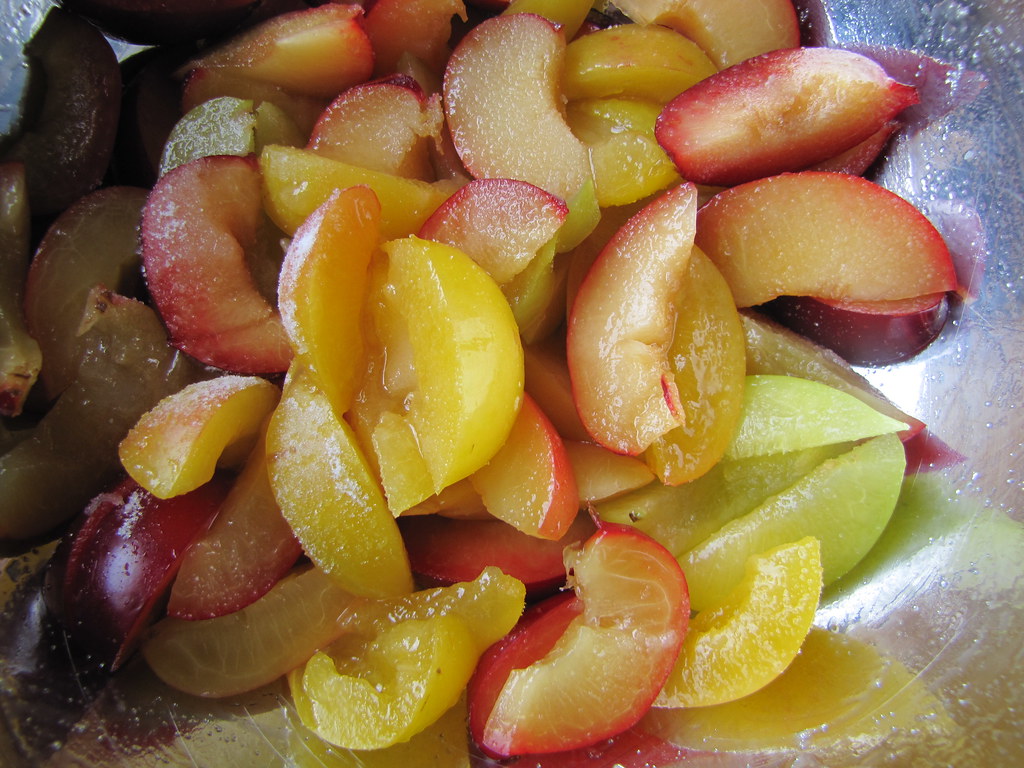 Two weeks ago, I invited food bloggers to a challenge: to cook (and blog about) a unique recipe from their home kitchen to our computer screens. The incentive? To win a ticket to Let Us Eat Local, the food-filled annual fundraiser party put on by Just Food. And, publication in the non-profit’s upcoming Veggie Tipsheets handbook, a how-to on everything you might come across at the market, or in your CSA share. Four brave bloggers took it on, and here’s what they made. Though we may not have room for them all in the handbook, I hope they’re online inspiration for years to come.


At ABCD’s of Cooking, Chitra made a crisp romaine salad dressed with homemade “Green Goddess” dressing — that is, with more veggies! Suspended in Greek yogurt, sour cream and mayonnaise with roasted fennel seed paste and more — check this one out whenever you’re sick of ideas for a dressing, for sure.

Sofia at Crunchy Granola Gal sauteed fresh nectarines in butter, and placed them atop red quinoa and green leaf lettuce for a salad with a decidedly dessert-like twist. That’s one colorful, easy weeknight meal!

Sarah at City Satiety wasn’t sated with just the fruits and veggies in the required list, and went ahead with searing scallops in sesame and panko to serve with her own plum salsa. That’s definitely something I wouldn’t find in a restaurant if I were trying very hard… Reason #umpteen?

Last but not least, Leslie at The Whole Plate combined savory and sweet in a tagine of plum, eggplant and chickpea. It’s an inspired take on the Moroccan one-pot dish that sounds as healthy as it is unique — and those are both off the charts.

All told, each of these bloggers really captured the essence of the contest: to make a unique dish with local, seasonal ingredients. I love how none of the fruits here were used in a dessert, but went into unconventional, yet satisfying whole meals. I’ll have to copy all of them very soon.

So let’s hear who the judges named winner. Our panel of local foodies and tastemakers once again included Gabrielle Langholtz and Rachel Wharton of Edible Manhattan and Edible Brooklyn magazines, Ben Sargent of the Underground Lobster Roll and Brooklyn Chowder Surfer, and Jacquie Berger of Just Food. Together, they chose…

Seared scallops in sesame panko with plum salsa, by Sarah at City Saiety! Did you? Let us know which recipe you would have picked, and why.

Sarah will be attending Let Us Eat Local tonight, and her recipe will be included in Just Food’s Veggie Tipsheets (although I think for this, maybe just the plum salsa part will be included). The book will be out soon and available to purchase through the nonprofit, so I’ll keep you posted on that. And just in: more prizes have been added to the silent auction that Just Food is holding both online and at the event, so if you want in on some of these great gifts but can’t shell out the $ to make it to the event, you can — and, your money will still get donated to the non-profit should you win. We’ve just added prizes from Brooklyn Slate, Eagle Street Rooftop Farms, and more, so check it out, and good luck!