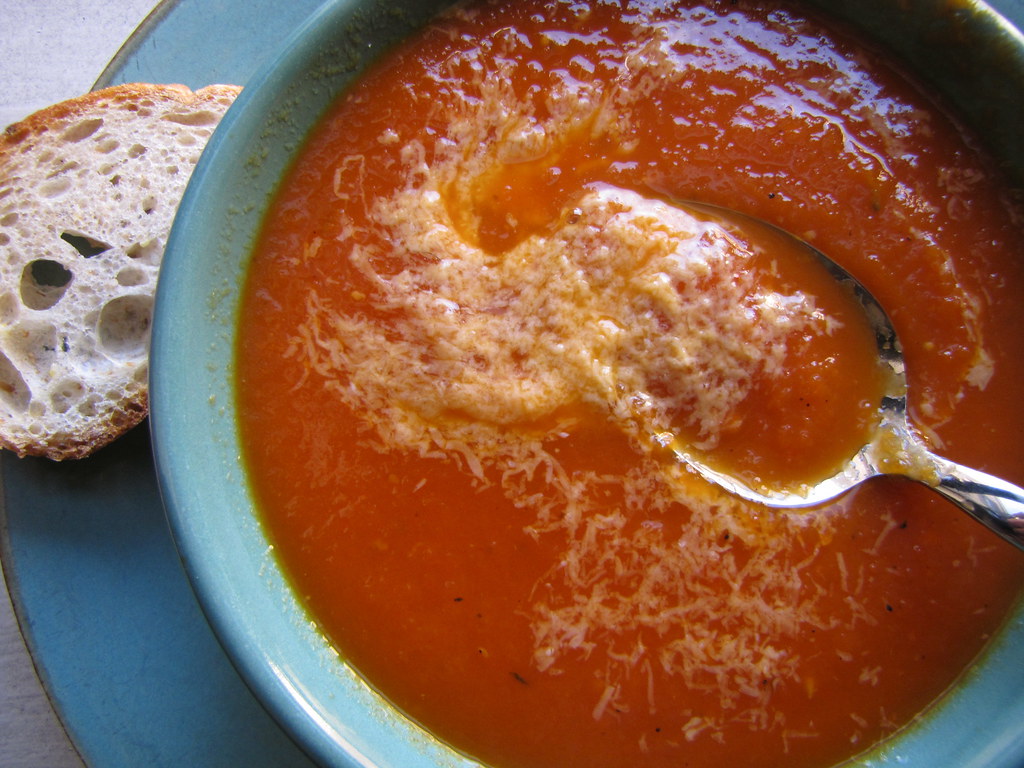 Most of my favorite soups have “peasant” origins. From the poorest “peas porridge” to simple black bean, reheated ribollita to wintermelon and stock, this humble fare reminds me that you don’t have to simmer a whole great number of specific things to come away with a really great soup. Especially if your ingredients are great on their own.


Take for example these red peppers, which I was intending to put up in jars. Instead, and in about the same amount of time that task would have taken, I pureed them into a hearty, smoky soup. A rind of parmesan and some veggie stock from the freezer is all the rest that went in. 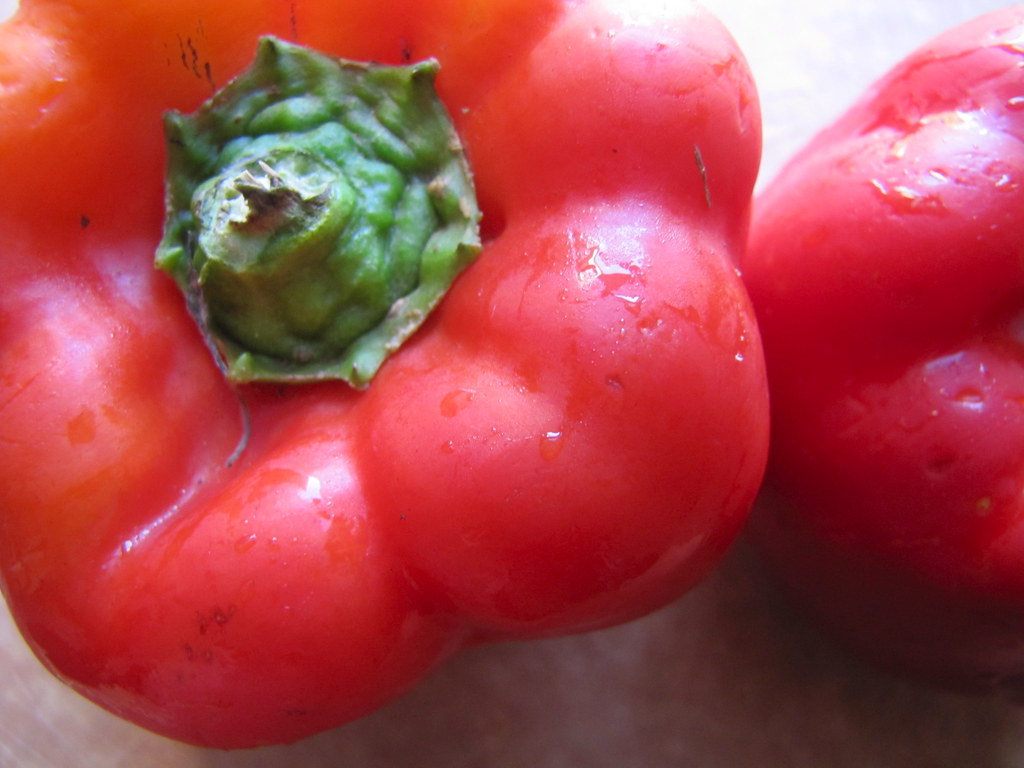 When roasted, skins blackened to a crisp, red peppers concentrate into powerful slivers of savoriness. Picking the reddest, most firm and enlarged red peppers at the Greenmarket one week, I was tempted to eat them raw. But it had gotten cold already, so a summer vegetable soup seemed like a good transitional dish. 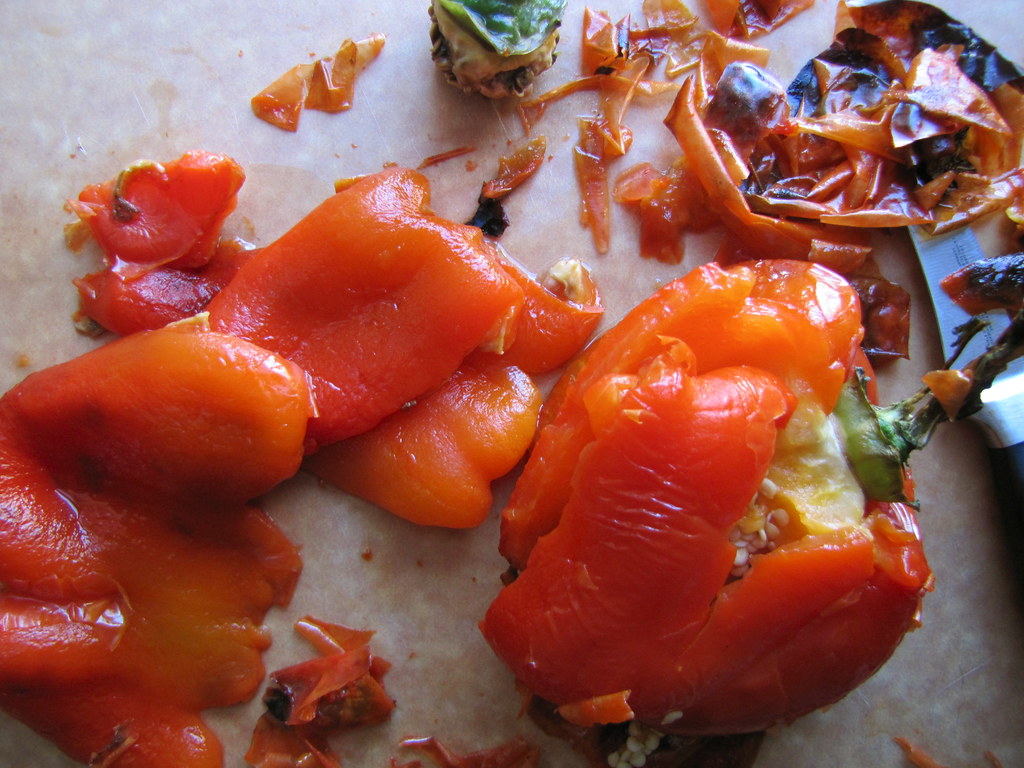 once roasted and partially peeled

There are a few ways you can roast your red peppers; sometimes, I’ll hold them with tongs over a high gas stove flame, turning them every few minutes to blacken the whole surface. But placing them underneath a broiler and stopping to flip them every few works, too. Once almost all of the skin is blistered, place a cover over the red peppers, or throw them in a plastic bag and twist it shut. The steam will help soften the skins even more, making them easier to peel. 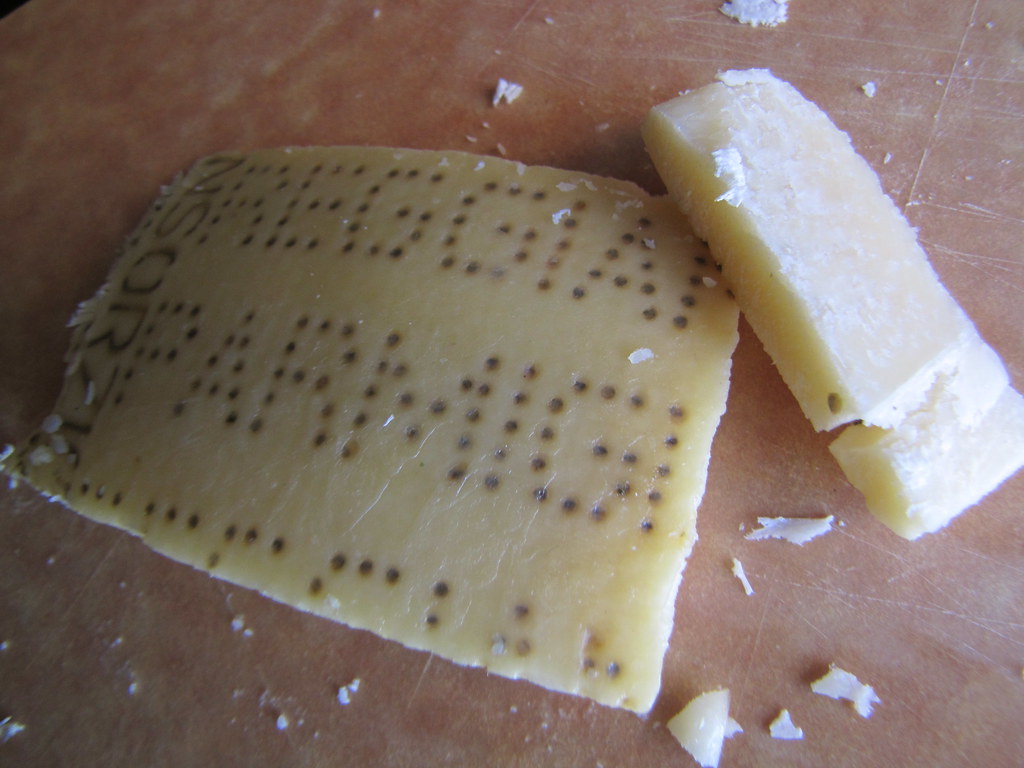 Then the fun part: plop them, skin and seeds removed, into a food processor or blender and whip them up into a slurry. In the meantime, you’ll want to have had a pot of vegetable (or chicken) stock simmering with a particular leftover thing: a rind of parmesan. It’s one sure way to add complexity without hardly any cost.

Finally, you could add a touch of milk, cream or maybe creme fraiche at the end, just like you might add to tomato soup. I just gave my bowl an extra shave of parmesan and grabbed a crust of bread, and settled for less being more.

Place the parmesan rind in a medium-large pot with the stock. Bring to a boil, reduce heat to a slow simmer and cover.

Remove stems from peppers and place on a roasting pan so that they are approximately of even height. Broil for 2-3 minutes, or until tops are blackened and crispy. Flip peppers and repeat until blistered and blackened throughout almost all of their skins. Transfer to an airtight plastic bag and seal shut; let sit for 5-10 minutes.

Remove peppers and once cool enough to handle, remove seeds, stems and any white parts. Slip off the skins, using a pairing knife for help as necessary (it’s okay if you miss a few parts). Transfer to a food processor and pulse several times until well blended. Transfer mixture to the simmering stock. Season with salt and pepper to taste. Let cook another 20-30 minutes. Remove parmesan rind and add any optional ingredients to serve.

Four brownie points: Peppers are antioxidant powerhouses, cleansing your body from toxins and free radicals. Red peppers have additional lycopene. While their benefits are bigger when eaten fresh, this soup has little else besides cooked vegetables (from the stock, and peppers) flavored with a little cheese. Nothing mysterious in this pot.

Eight maple leaves: It’s the last hurrah for peppers in the Northeast, so stock up on them to preserve — or make this soup and freeze it, as I ended up doing with leftovers — now. If you’re looking to make vegetable stock and freeze them for yearlong use, you’ll have all of winter to do so, as carrots, celery and root vegetables begin to flood the markets. Even though it’s hardly local, I’ll give points here for using the parmesan rind, something that would otherwise go uneaten. Tip: if you don’t have a wedge of parmesan from which to salvage a rind, I saw just rinds on sale at the Brooklyn Larder, really cheap.