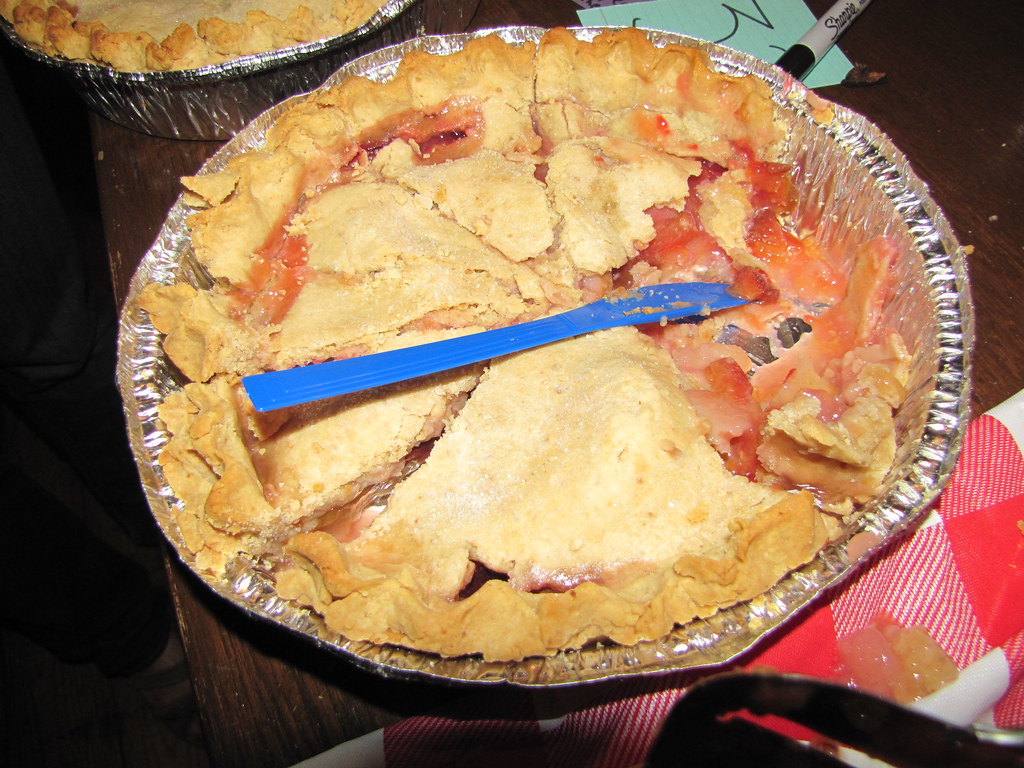 It’s a simple conceit: peanut butter and jelly, America’s favorite sandwich combination, in America’s favorite dessert, pie. You could approach this in many ways, and one other person at the pie contest that I baked this for actually did, layering a peanut butter mousse with concord grape mousse in a thin crust. But the way I went about it was more in keeping with pie tradition than pb&j: I made a fresh fruit filling, and instead of just butter in the crust, added peanut butter, too.


I’m not sure why more pie crusts aren’t made with nut butters now. True, it took a lot of effort to roll out — I used about equal parts of peanut butter to cold butter chunks — but in the end, the peanutty flavor really came through, and the crust resembled the taste of a peanut butter cookie.

To be sure of this, I used a serious peanut butter made with just roasted peanuts. This is usually labeled “natural” peanut butter, and if you look at the ingredients, they should just be peanuts, and maybe salt. I had a jar of one such peanut butter called “Cream-Nut,” which I’d picked up at the Brooklyn Farmacy once (apparently their bookkeeper is from Michigan, where this longtime peanut butter company is based). 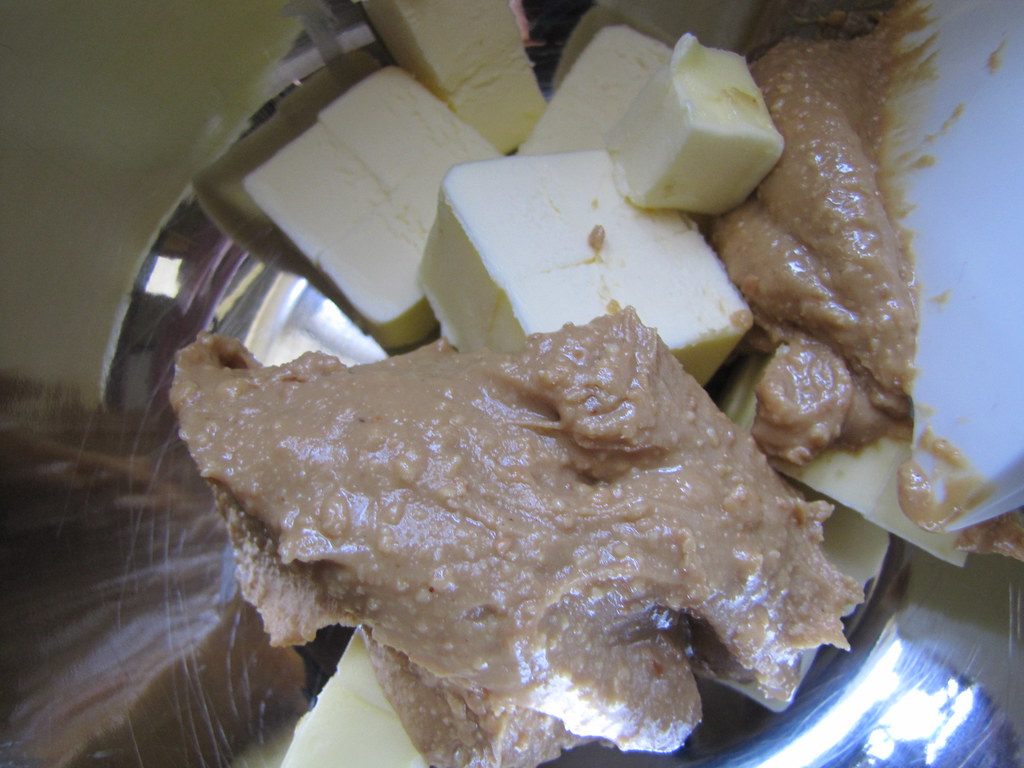 And to assure the best possible “jelly” inside the crust, I used whatever fruit looked ripest from my CSA batch. In went a couple of red plums, a black plum, a peach, and an apple. It was a bit of a random assortment, I guess, and if only I hadn’t turned the concord grapes into “real” jam the night before, those might’ve gone in there, too. But it was a bright and juicy fruit medley jam as was, and to create a thicker, jam-like sauce, I added cornstarch to the sliced fruit before baking. 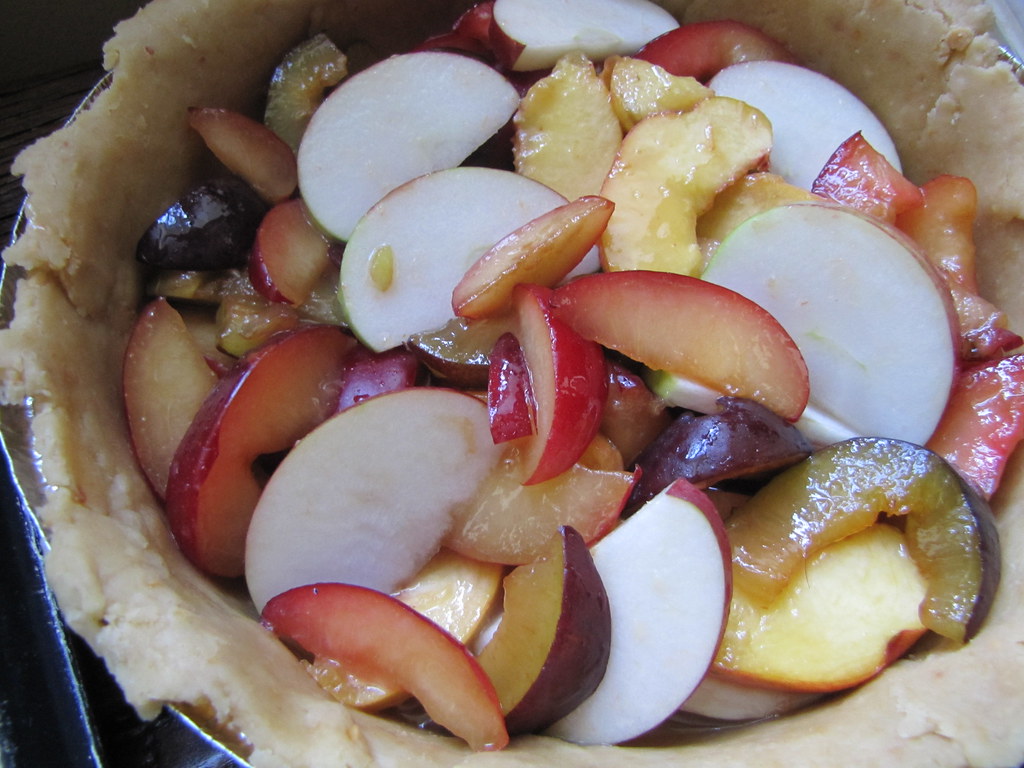 What was my competition at the contest? I wish I’d gotten to taste them all to find out. This bake-off was a fundraiser for Greenpoint Open Studios, an event happening this weekend in Greenpoint to foster its thriving arts community. I’m not an artist nor do I live in Greenpoint, but this is a friendly cause I can get behind. Plus, I can’t resist a chance to show off a strange pie.

Neither could others, it seems. From “Margarita Pie” to a kimchee and spinach savory pie, there was a real freakshow of pies proudly on display. Not surprising that this is an artist community, huh? 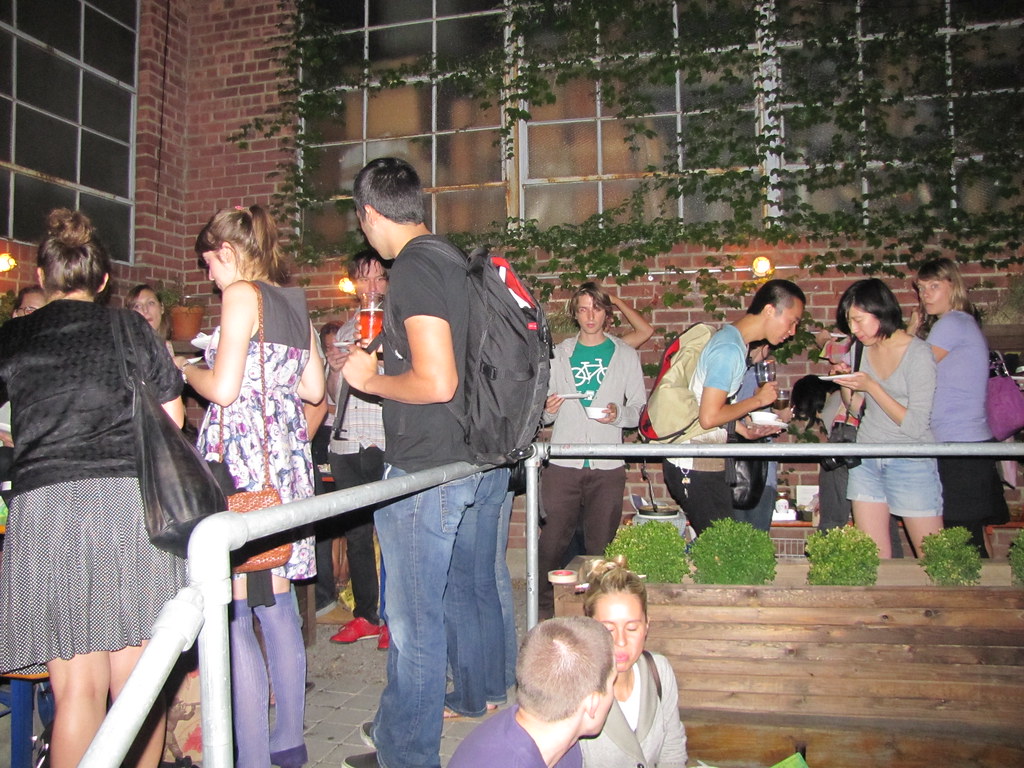 bakers and tasters gather in the backyard of The Diamond bar 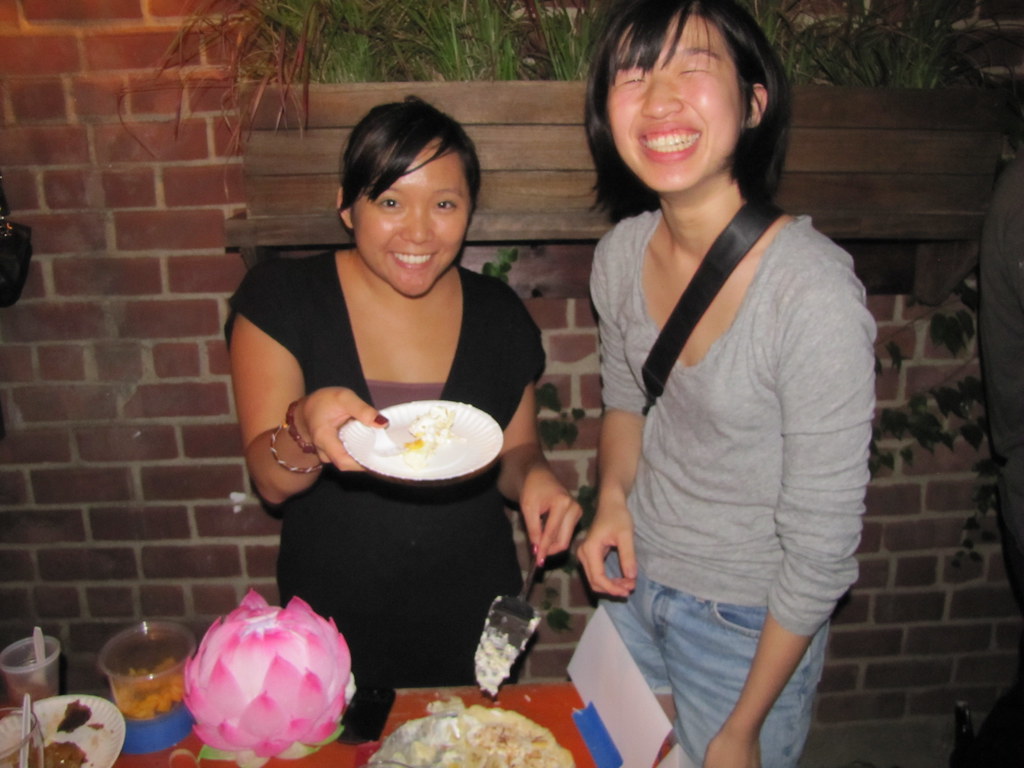 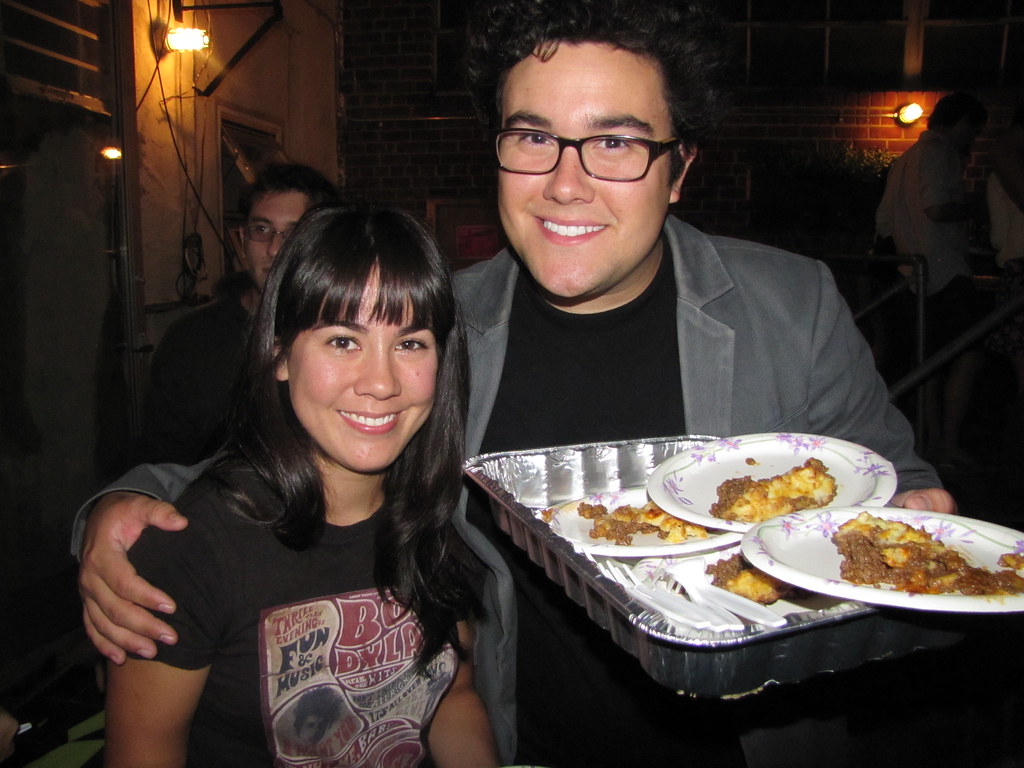 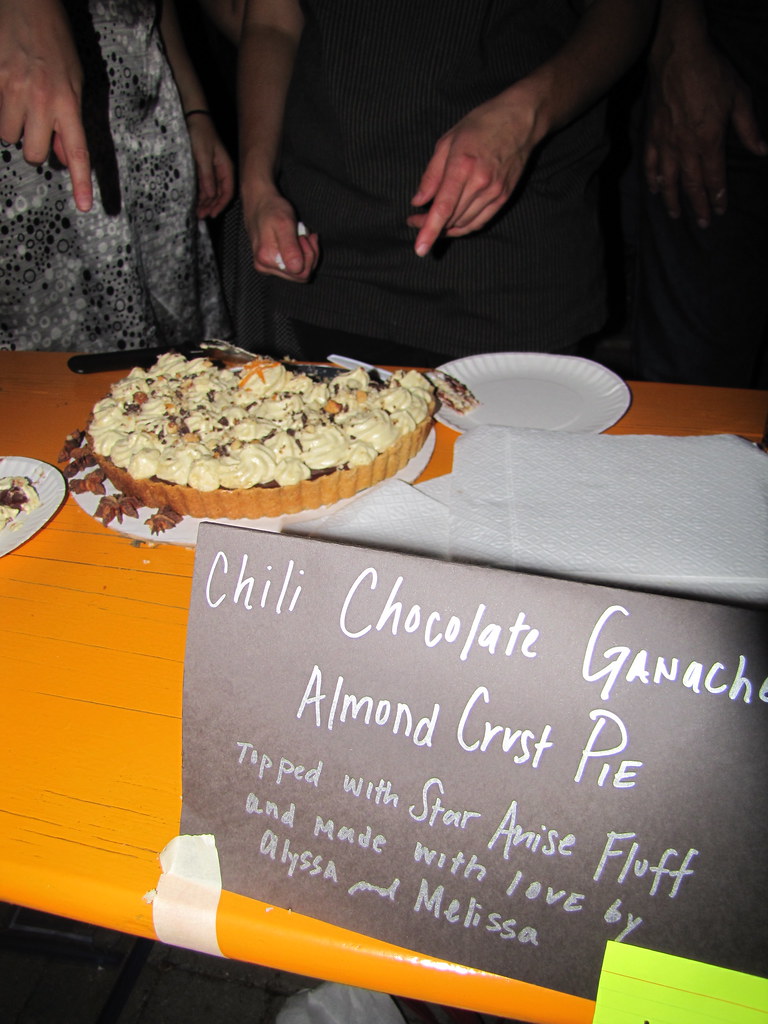 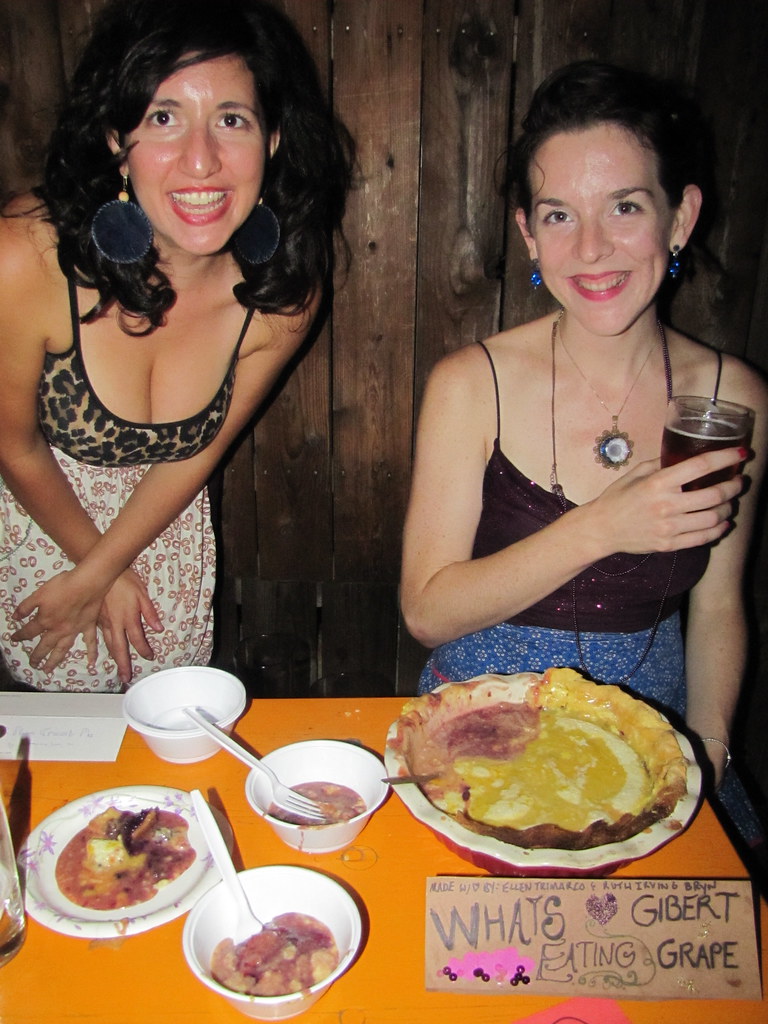 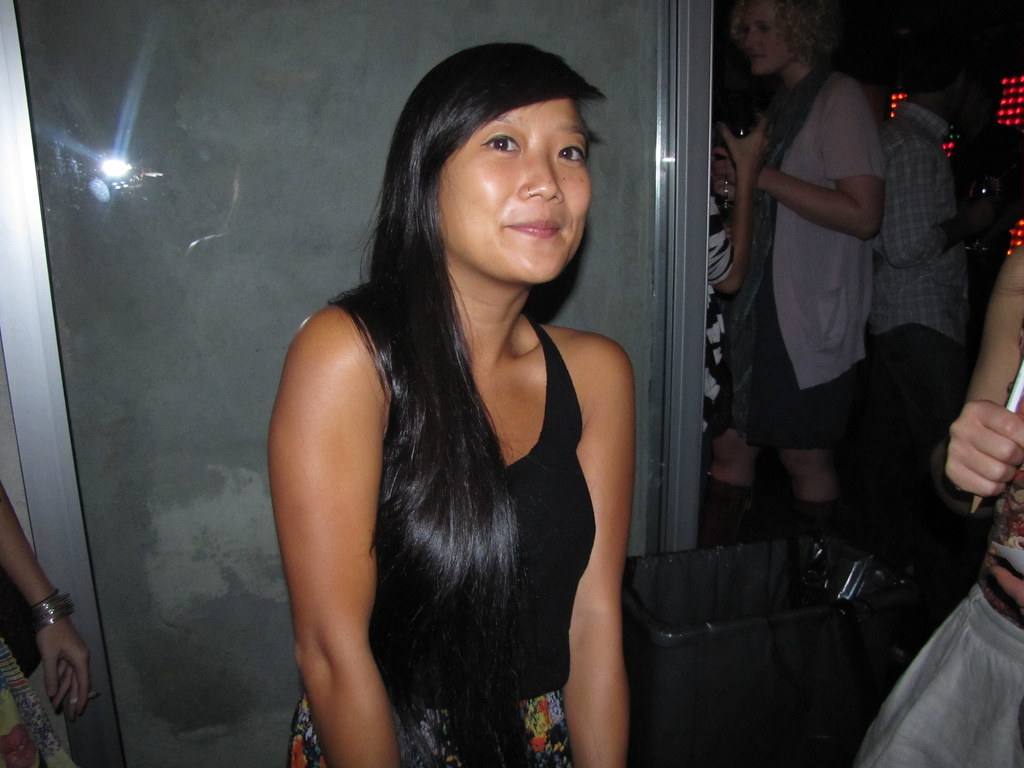 I decided to get dinner before the winner was announced, but I’m told that the pie with maple-glazed bacon and pralines won first place. And rightly so, if presentation and effort are worth anything — that pie’s baker plated each bite-sized portion beautifully, making sure that every piece had a glistening slab of bacon placed on top like a slanted roof. It was artful, one could say.

Make the crust: Combine the flour and salt. Using a pastry blender, your fingers or a food processor, cut the butter and peanut butter into the flour until the mixture resembles coarse crumbs. Add water one tablespoon at a time and stop when the dough is malleable enough to form a ball. (If using food processor, slowly add water one tablespoon at a time to the mixture while pulsing it just until a ball is formed). Break into two balls. Cover them with plastic wrap and chill at least 30 minutes. (Crust can be made several hours beforehand.)

In a large bowl, combine the fruit with the sugar and cornstarch and mix well. Roll one pastry ball out and transfer to the bottom of a 9-inch pie pan. Fill with the fruit. Roll out top crust on a sheet of waxed or parchment paper, and carefully transfer peel off on top of the pie. Crimp edges to seal the pie shut, and poke holes throughout the top with a fork to ventilate the filling. Sprinkle the top of the pie with sugar. Bake at 375 degrees for about 40 minutes, or until lightly browned on top.