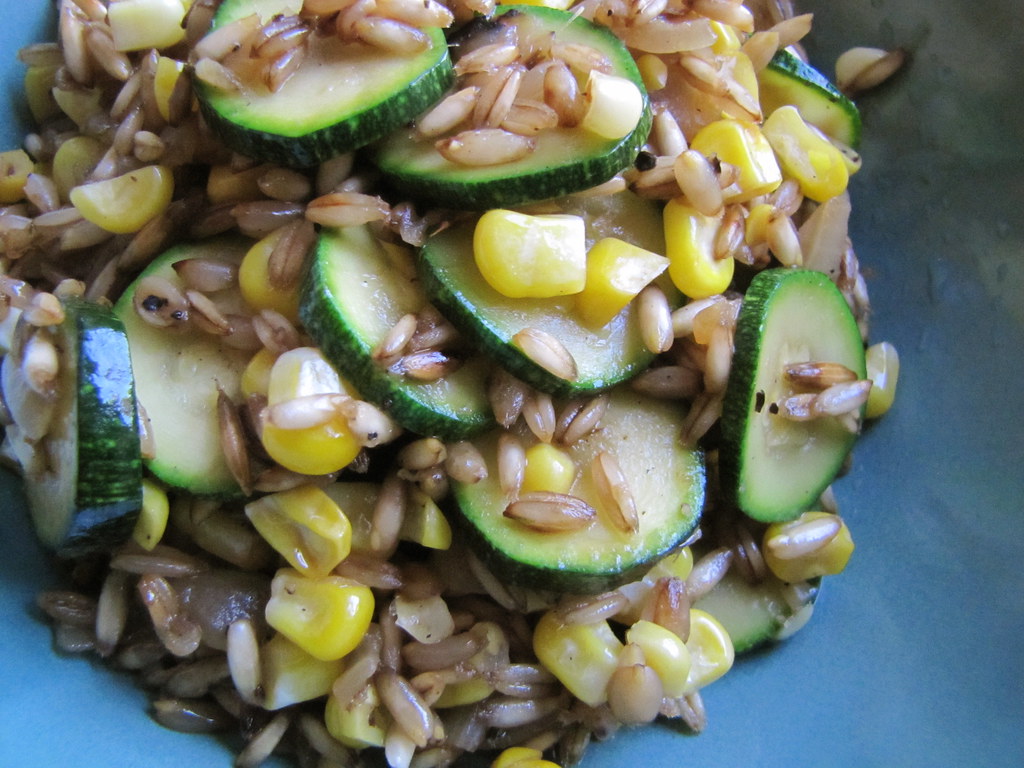 We’re in a fall transitional time, when savory spoonfuls of something warm might appeal, but bright summer produce is still abound. I was going to make some oatmeal for breakfast, but this happened instead. Luckily, by the time these oat groats had softened, it was lunchtime, too.


There’s a stigma attached with risotto that it takes a long time and much labor to make. That’s a fair assumption when making risotto with short-grain rice, such as arborio. (Although I’d argue it’s well worth the twenty minutes of occasional stirring, as I’ve made many versions of this, one of my favorite dishes, here.) But when choosing whole-grain oats to swap in for the classic rice, it’s an understatement. So what is the advantage of using oats, you might be wondering by now? They have a wonderfully nutty texture, have whole-grain vitamins, like fiber, and they help lower bad cholesterol, like most oats. Whole oats with the bran still intact are very low on the glycemic index, meaning it’ll digest slower and give you energy more steadily. 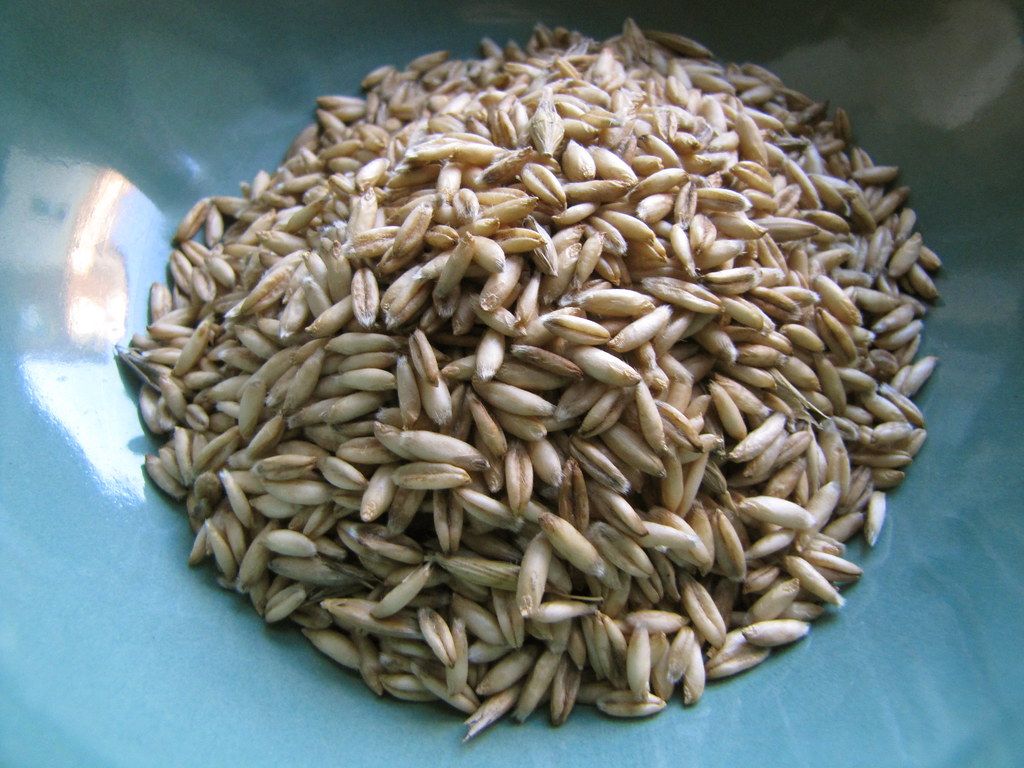 So consider the extra time you spend to cook them handsomely paid off. I came across these oat groats, or unhulled, whole oat grains, at Cayuga Organics’ stand at the Greenmarket. They didn’t have rolled oats, which I was looking for (for those oatmeal mornings), but the representative offered a bag of these instead. The grayish-brown, sharp, small pins were unlike any “oats” I had ever seen, but then, this was the pure, unadulterated version of the actual thing. “So it’s like steel-cut oats,” I began… except, they hadn’t been cut by steel. You can even sprout them if you wanted, the representative explained. They’re a living food. This was a selling point that went a little above my head, but I may have to try this out soon. I just discovered a little video that may help me out with this task, too. 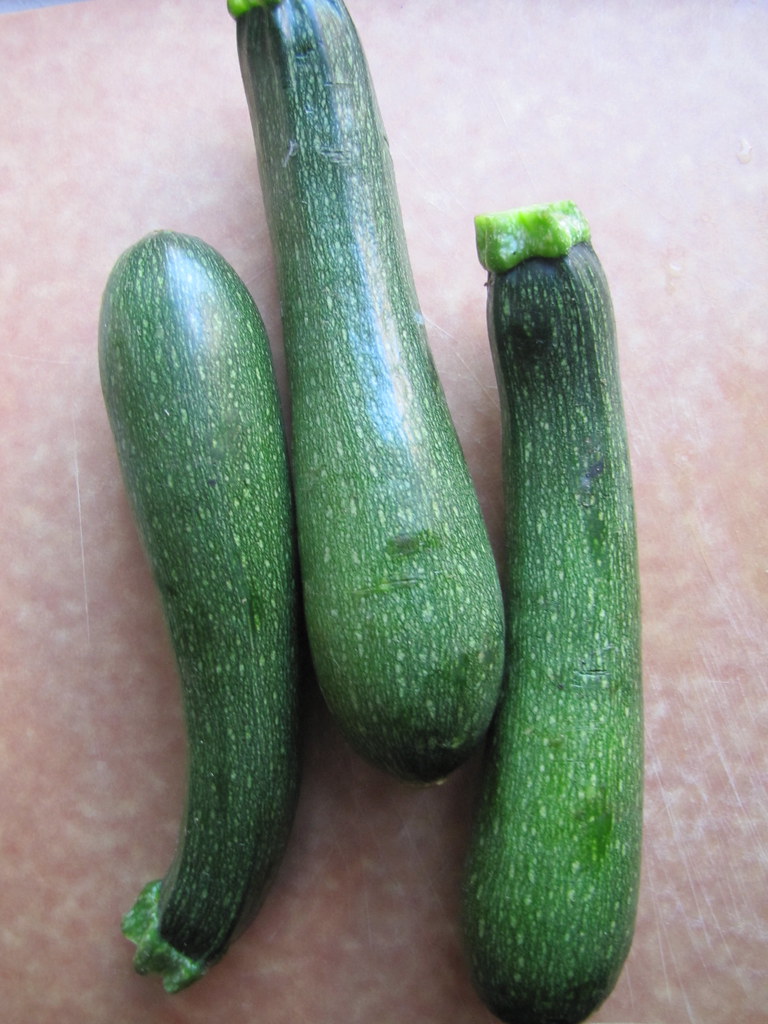 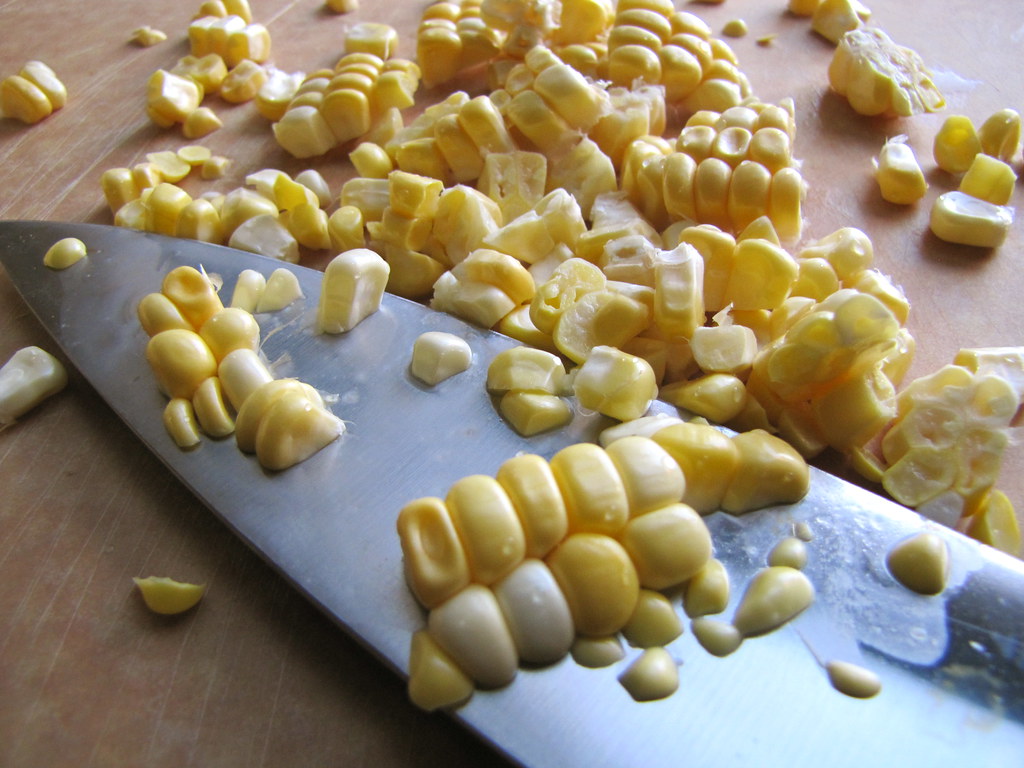 corn sliced off the cob

So I went home and stood over a pot of these oats and cooked them into porridge-like risotto. When the oat groats were added to the pan after sweating the onions, I gave them a few minutes to lightly toast. A really fun thing happened then — many of them began to crack open, audibly so. It sounded like popcorn, only these grains didn’t expand with a puff of white.

This dish had some good help with the produce still in season. I had a few ears of sweet corn on the cob left to use, I’m afraid the last for this early fall. Ripe, small and firm green zucchini were sliced to stir in toward the end along with it, too. Light but satisfying, it’s the kind of meal you’ll feel full from after one bowl. 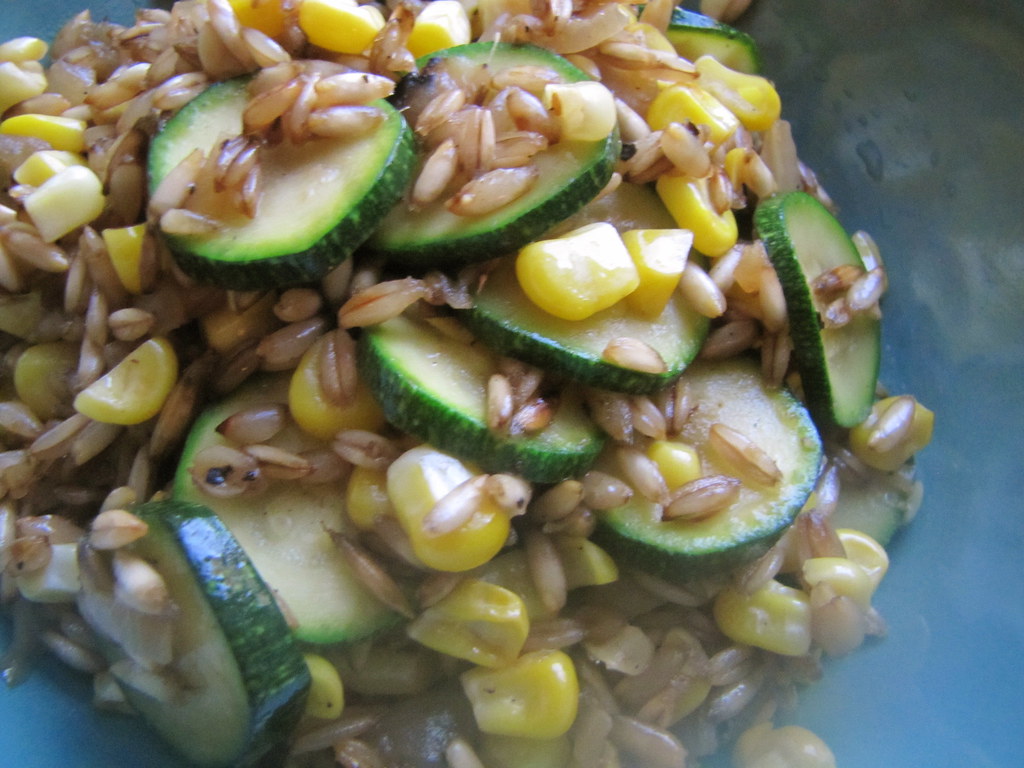 I’ve often told people that there were four hallmarks I try to keep in mind with each recipe on this blog: cost-efficiency, healthfulness, practicality and environmental friendliness. Sometimes, you can’t hit all nails on the head at once, and this one dropped the ball a bit on practicality since it takes so darn long to make. You have been warned!

Heat a heavy-bottomed saucepan or Dutch oven with the oil and cook the onions until softened over medium, about 8 minutes. Add the oat groats and stir to gently toast, about 1 minute.

Meanwhile, warm the stock in a separate saucepan and add a ladle of stock to the oats. Let it absorb almost completely and add another ladle. Continue adding stock, stirring occasionally, until oat groats are tender, about 40 minutes. Add plenty of salt and pepper to taste. Stir in the corn and zucchini and cook, stirring, for 2-3 more minutes. Drizzle with extra olive oil and add optional butter or cream if desired. Sprinkle in the grated cheese, stir, and serve.

Three brownie points: Most risottos are rich, oily and fattened with so much butter you don’t even want to know. This is taking a liberty with the tradition of the dish for its much less creamy texture, created in large part because oat groats aren’t nearly as starchy as short-grain rices are. It takes another liberty because I didn’t really try very hard to make up for this by adding much extra fats or cream. In any case, the oat groats are a great source of fiber, iron and selenium, and is known for reducing “bad” fats in your body, good for your heart. Fresh, gently cooked zucchini is a great veggie to get your potassium fix, Vitamin C and Vitamin A, and fresh corn adds a pop of texture, sweetness and B-vitamins, too.

Nine maple leaves: I can’t think of too many things that went into the dish that weren’t grown locally and sold at the Greenmarket: olive oil, salt and pepper. Otherwise, this seasonal and nutritious dish was sourced from friendly, familiar farms. I grabbed lots of carrots, onions and celery on this market run to make all the veggie stock with here, too — celery’s just now in season so it’s a good time to.