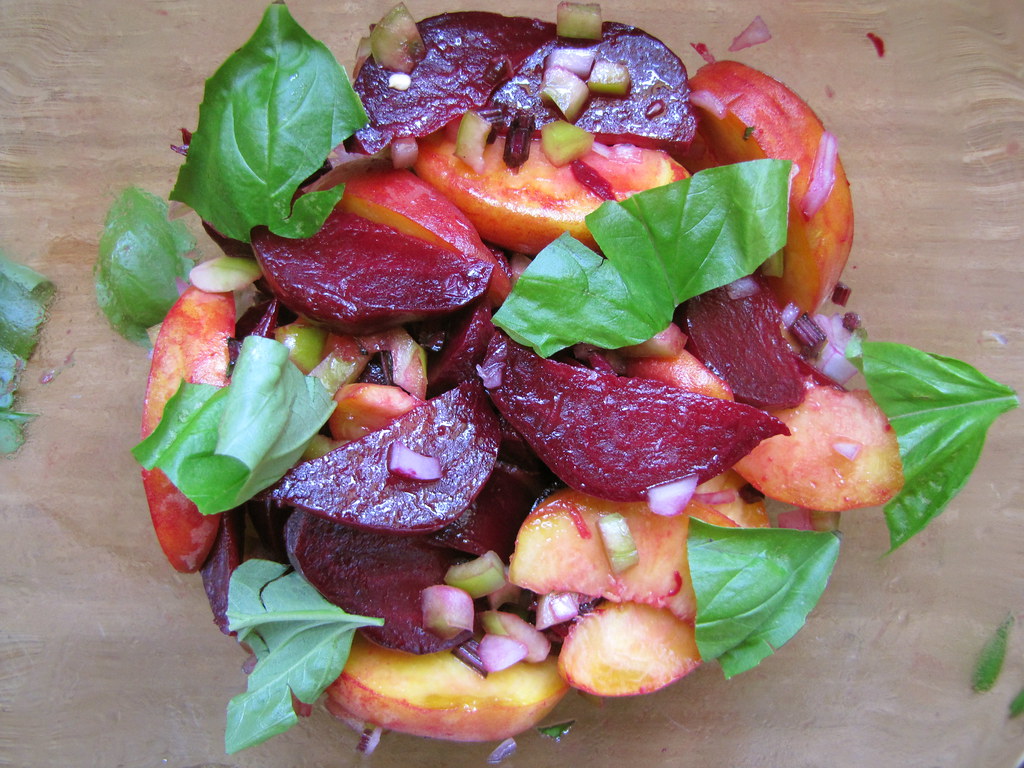 I don’t know anything that doesn’t taste good with a slice of a fresh, juicy and tree-ripened summer peach. It doesn’t need anything to accompany it, but it sure can give other ingredients a boost. For example, ricotta or goat cheese with a peach slice on crostini. A bowl of vanilla ice cream with peaches. Grilled peaches on shishkabob sticks, in salsa and gazpacho, on a pizza instead of tomato slices, peanut butter and peach sandwiches. I’m eating buckwheat pancakes with peaches on them right now. Life is peachy. So I decided to do as I’ve done before with citrus fruit wedges, and toss them along with some roasted beets.

Unlike other prized fruits of the summer, like cherries and strawberries, the window for peaches in season is comparably long. This year, thanks to the intense heat and dryness — which peaches like — Jersey peaches made their first appearance at the Greenmarket remarkably early, about a month ago. And I hope they continue to fill the stands for the rest of the summer, perfuming the crowded streets with their sweet, peachy smell. 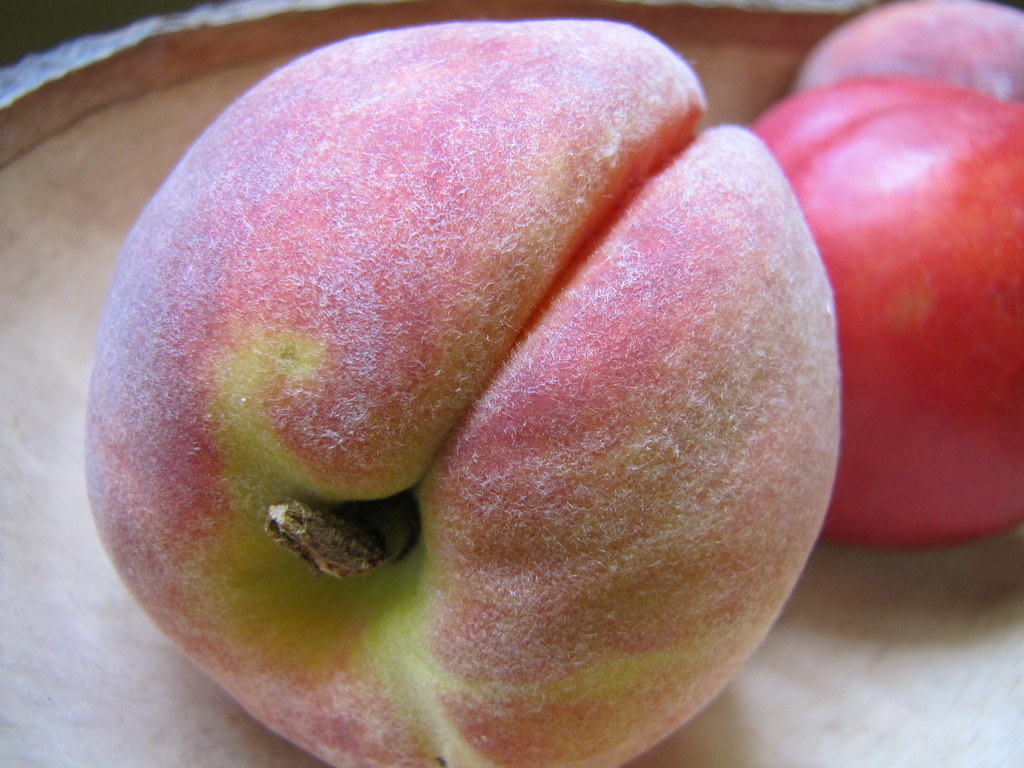 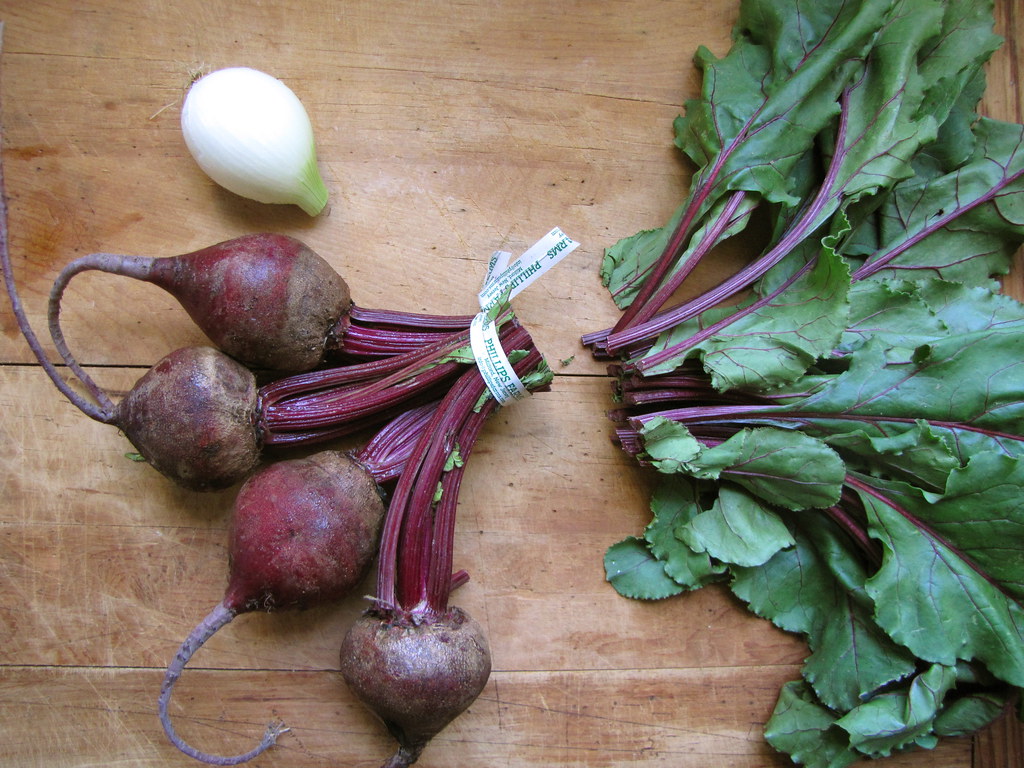 a bunch of beets loose their greens (for another use)

I also scored beets at the Greenmarket last week. Young, crisp and colorful, these had a full head of greens that were happily gobbled up after sauteeing with onion and olive oil. In the past few years, I’ve gone from beet disbeliever to a regular aficionado of the root. There was a period of maybe six months when I ate a roasted beet — as a snack, as a side — almost every day. Some foods are bad for you eaten in excess; conventional wisdom would say excessive anything is not something to be wary of. But I’d disagree about beets. Though they’re a deep, dark red that stains everything they meet, the flavor of the beet is pretty benign, and the texture, agreeably unremarkable, too. It didn’t feel like I was eating much of anything with each one, but the sensation was somehow satisfying. It felt sort of like taking a daily vitamin.

And it is. Like their intense color would suggest, beets are big on antioxidants, and have cancer and heart disease-fighting properties, as well as a host of vitamins and minerals. All told, I don’t see why eating beets should be a rarity, a “special” on a menu, or a once-in-a-blue-moon soup. They’re cheap; they store well; and they’re available all-year. Especially in summer, when they’re just-dug and new. 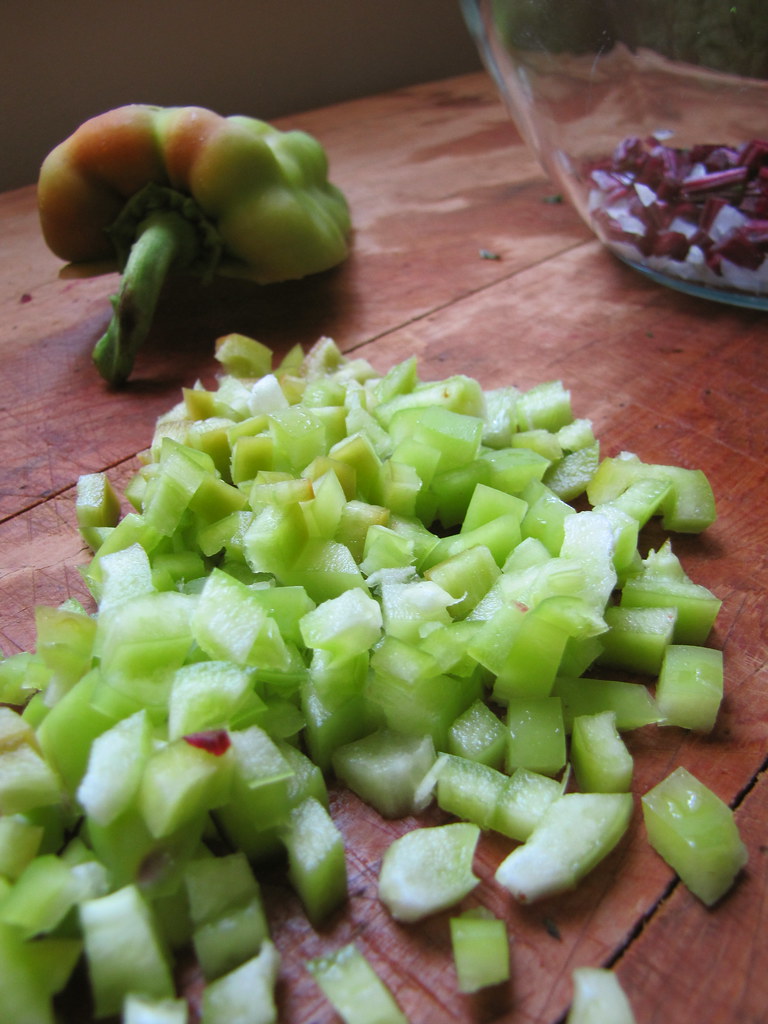 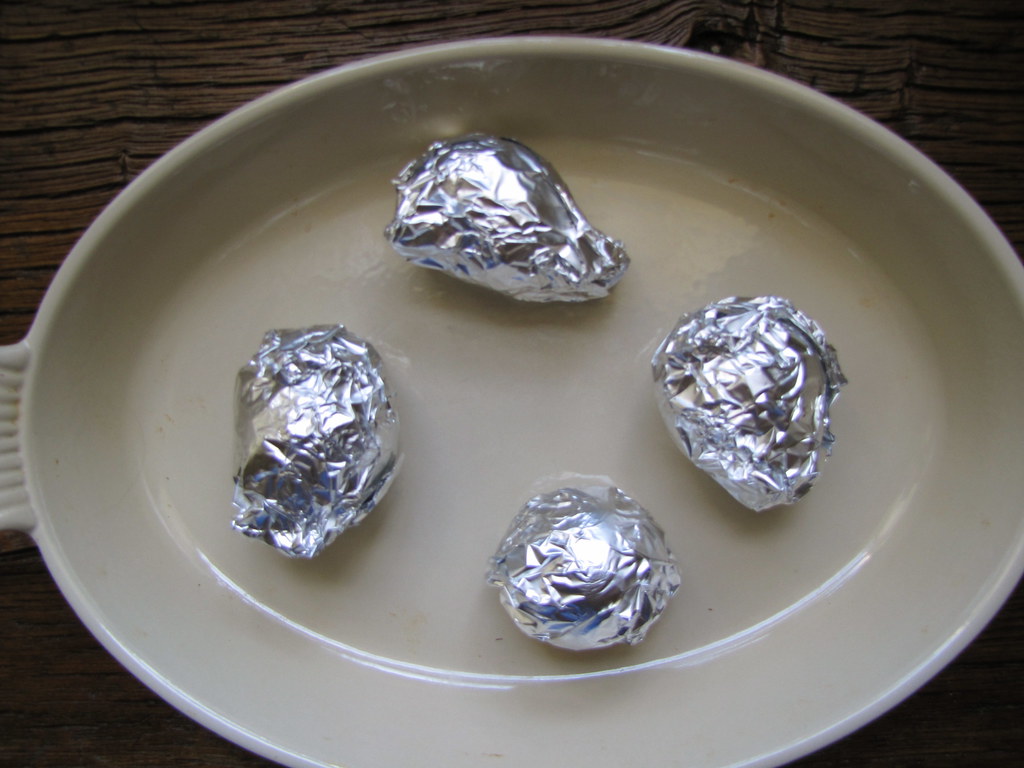 For this salad, you’ll want to roast and cool your beets first. I find wrapping them in foil and throwing them in an oven for a while the easiest, cleanest, hands-off way of to do that, and roasting intensifies their flavor, too. Here’s a more detailed how-to on that. And once they’re all cooked and de-skinned, try holding the beet in your hand as you carefully cut wedges. Because a cutting board and any surface it touches can easily get stained.

For a little crunch, I chopped a sweet pepper and onion finely, and did the same with the leftover, juicy beet green stems. This mixture was tossed with lemon juice, olive oil and salt until fresh, crisp and tasty enough to eat up alone. Since my peaches and beets were almost the same size and shape, I cut them into wedges of about the same size. If your peach clings to the stone, as mine did, just try cutting the wedge into the peach while holding it up, too, and seeing if you can’t yank just that wedge away from the stone at a time. 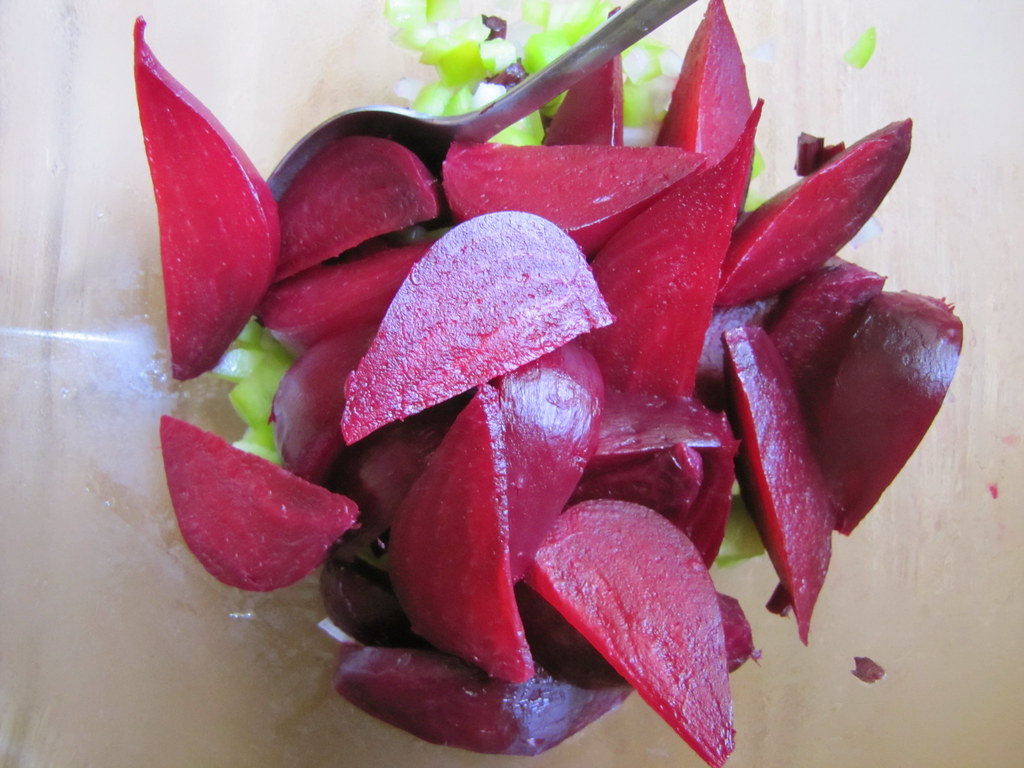 Maybe this salad is just a way of combining two of my favorite things, but it sure makes a striking bowl to bring to a barbecue. I brought this one to a birthday picnic in Central Park, and it was cut short when an unexpected thunderstorm showered on us. It didn’t stop for the whole day, and this bowl of salad — left out — got a good deal of water to wash it down. I grabbed my things and ran, waterlogged bowl of salad and all. When I got home, I took another look at the leftover beets and peaches sitting in a small pool of water, shrugged, and gobbled them up. Case in point, you don’t really need a dressing, or any seasoning to spice up two ingredients if you like them that much. But here’s a good way of gussying up a peach and beet salad, if you’re shy of either one.

Preheat oven to 375 degrees. Wash each beet and remove any long strands. Wrap individually in foil and place on an oven-safe tray. Roast approximately 30-40 minutes (depending on the size of your beets). Remove from oven, unwrap foil, and let cool completely. Once cool enough to handle, peel the skins off (they should slip off easily). Cut into quarter or eighth wedges.

In a large bowl, toss the onion, pepper and beet stems with the olive oil, lemon juice and salt and pepper to taste. Carefully cut peaches into wedges and discard the pits. Gently toss in the beet and peach wedges, and add the basil leaves for garnish just before serving.

Cost Calculator
(for 4-6 side servings)

Three brownie points: This is a fabulously healthy summer side. Somewhere in between sweet and savory, it has its share of natural sugars from the peaches as well as beets, but they come along with Vitamins A and C aplenty, as well as folate, fiber and potassium. The peppers, basil and lemon juice add color as well as extra doses of those, too. Hardly any fat is used, nor really needs to be used, for something like this, so I went easy on the olive oil, adding maybe two tablespoons total. The more you use, the richer, and it will help marry the flavors. Olive oil is a heart-healthy fat anyway, so it won’t hurt much.

Eight brownie points: I think everything int his came from local markets with the exception of the lemon, olive oil and salt and pepper. That’s not such a huge feat given it’s the middle of the summer, but anyway, here’s to using the summer’s bounty in every which way!