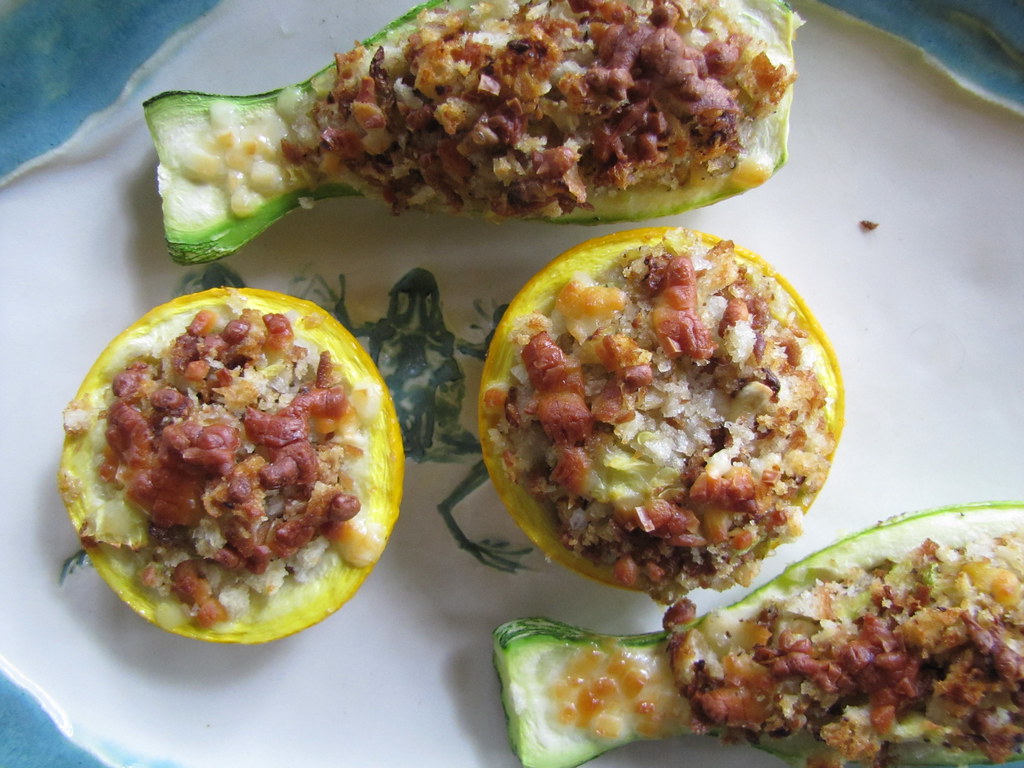 Stuffed with what, it really matters little. Do a crab dip type thing, spinach, bacon or pancetta, or this: lots of herbs with breadcrumbs, onion, and the scooped-out squash sauteed first. Sprinkle cheese on top before roasting, or not. Or stuff it with “surprise,” what happened to that fun tradition? The object is using the summer squash — particularly the rounder species, like these lovely eight-ball varieties just in season — in ways we haven’t before.


At least, that was my impetus for stuffing some fresh, colorful squashes. I was marooned in a cabin in the wilderness recently for about a week. It was completely intentional, of course — vacation. But I brought to eat only what I’d managed to forage from the Greenmarket the morning I left, and some other pantry goods. Lots and lots of squashes were there, such vibrant and eye-catching, so I grabbed green and yellow globe-shaped (or “eight-ball”) squash along with speckled green pear-shaped ones, too. It’s so much fun to gear up when you’re going away for a while. 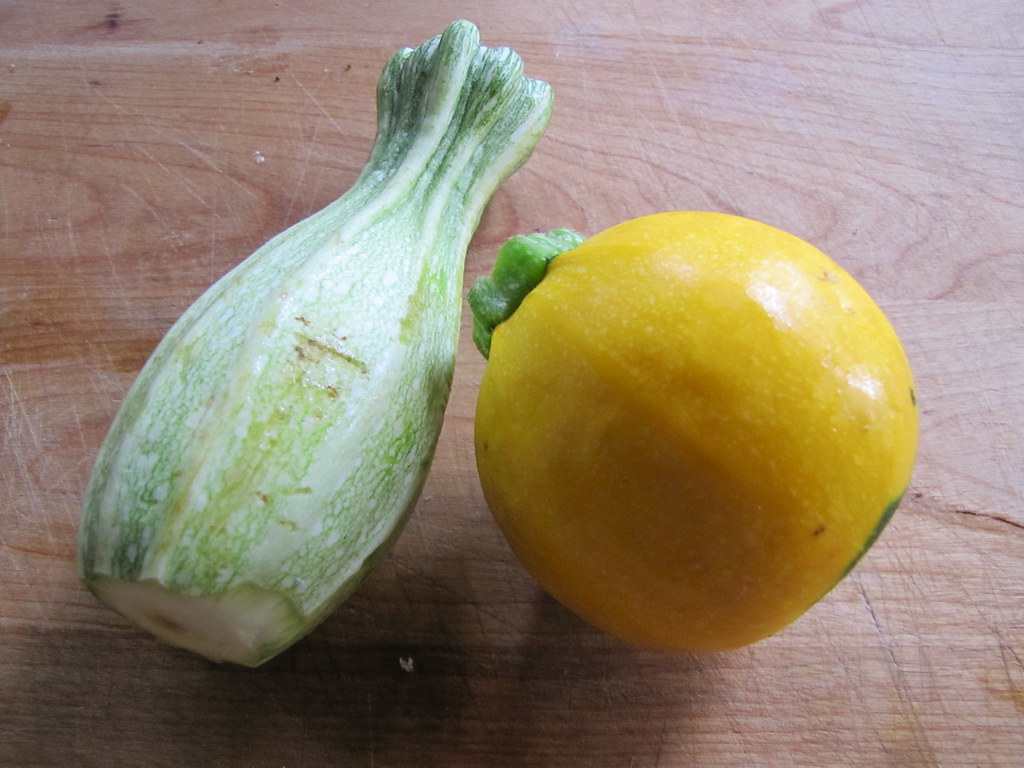 The first night, I chopped up some of these squashes into wedges, and browned them briskly with olive oil, sea salt, and a small clove of garlic. The next morning, I did more or less the same, and served them inside an omelet. Don’t get me wrong, the seared, carmelized edge of a summer squash is pretty hard to beat, but roasting them held some fun potentialities, too.

So I halved some of these squashes and zucchini, and scooped out the seeds and most of the flesh to about half an inch around its skin. Chopped up, this went into a skillet where they were quickly sauteed along with some onion and garlic. Fresh breadcrumbs (from a stale baguette) and simple seasonings later, it was a bonafide “stuffing” for something. 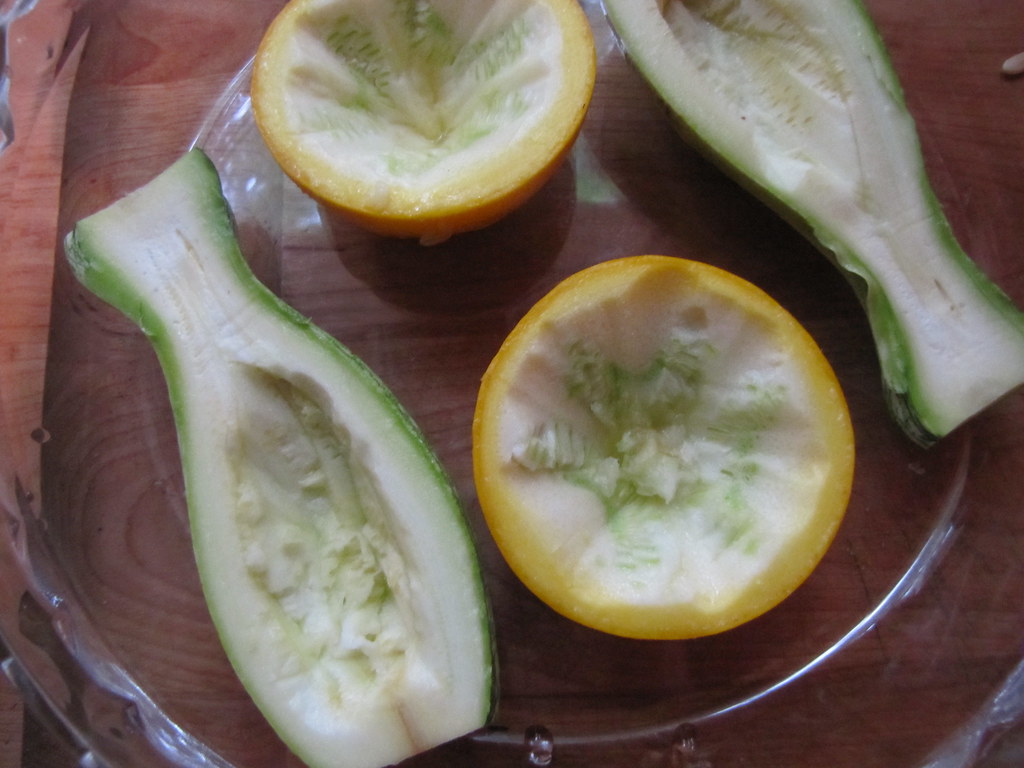 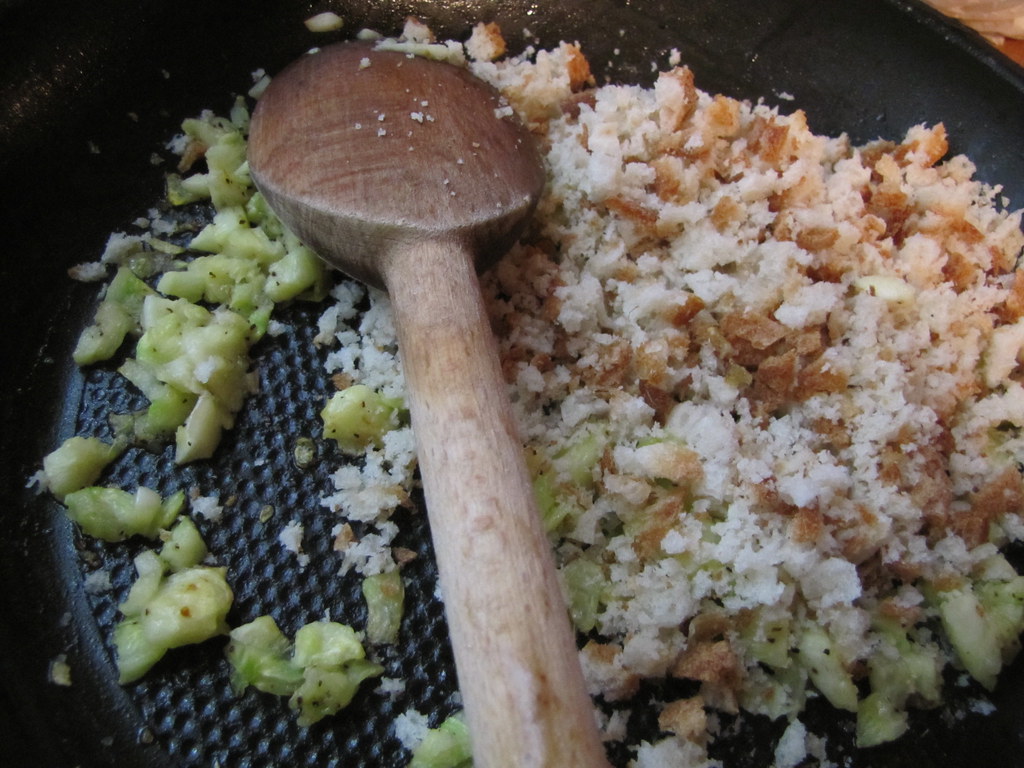 squash seeds and flesh are scraped out of the centers, and sauteed with onion, herbs and breadcrumbs

So if you’re also looking for something new to do with all the beautiful zucchini and summer squash around, this is just a fun idea that can lead to endless variation. Chopped olives or capers, tossed into the mix? Why not? Meat, like minced or ground pork, instead of breadcrumbs and veggies altogether? Meatball in a squash, sounds good to me. Sundried tomatoes, goat cheese, roasted red peppers, nuts, parsley and butter… it’s all good. But in theory, it’s a good way to use up scraps of whatever’s leftover and around, like bread. Have fun with it, and here’s the recipe for what I had around, and used. 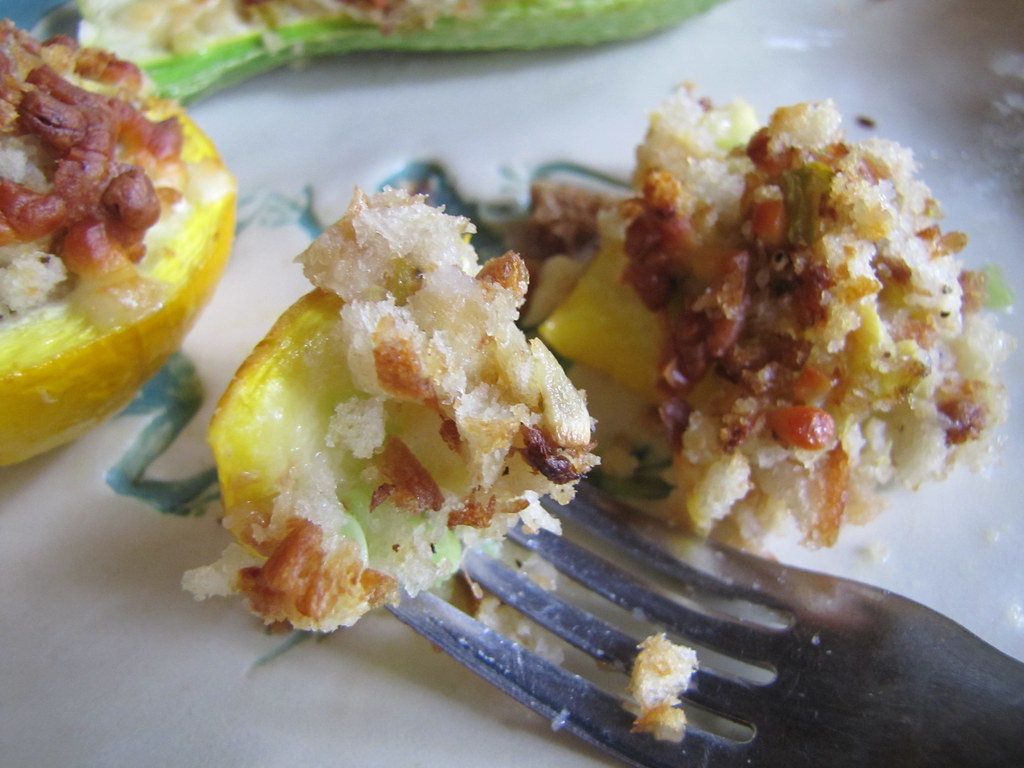 2 summer squashes (preferably ones with rounder shapes so as to stuff more easily)
1 garlic clove, minced
1 small-medium onion, chopped
about 1/2 cup fresh breadcrumbs
herbs such as parsley, thyme or sage, chopped
about 1/4 cup grated Swiss or Gruyere cheese (optional, and substitute any cheese — I used Manchego because it was handy)
salt and pepper
2 tablespoons olive oil

Preheat oven to 375 degrees. Slice squashes in half. Using a spoon, scoop out the seed pockets and the flesh so that the remaining flesh is about 1/2 to 1 inch thick from the skin. Dice the scooped-out seed and squash mixture.

Coat the inside and outside of the scooped-out squash halves with salt, pepper and olive oil. Stuff a handful of the stuffing mixture into the concaves of each squash, pressing it in with your hands. Sprinkle the optional grated cheese over each of the mounds of stuffing. Place spread apart on a baking sheet and bake about 20-25 minutes or until golden brown on top. Let cool a few minutes before serving.

Cost Calculator
(for about 4 appetizer-sized servings)

Four brownie points: Just because it’s savory, baked and golden doesn’t mean that it has to be so bad for you. Yes, this application for cooking summer squash (and zucchini) is probably heavier than many common ways of preparing it may be. But you could elevate it to a whole meal this way. With the squashes already providing lots of potassium, fiber and vitamins you’ve covered a decent amount of bases, nutrition-wise, already.

Seven maple leaves: This recipe was a solution to a locavore diet, very much in the moment and craving more summer produce than just zucchinis and squashes. Add anything else from your region in season to it.