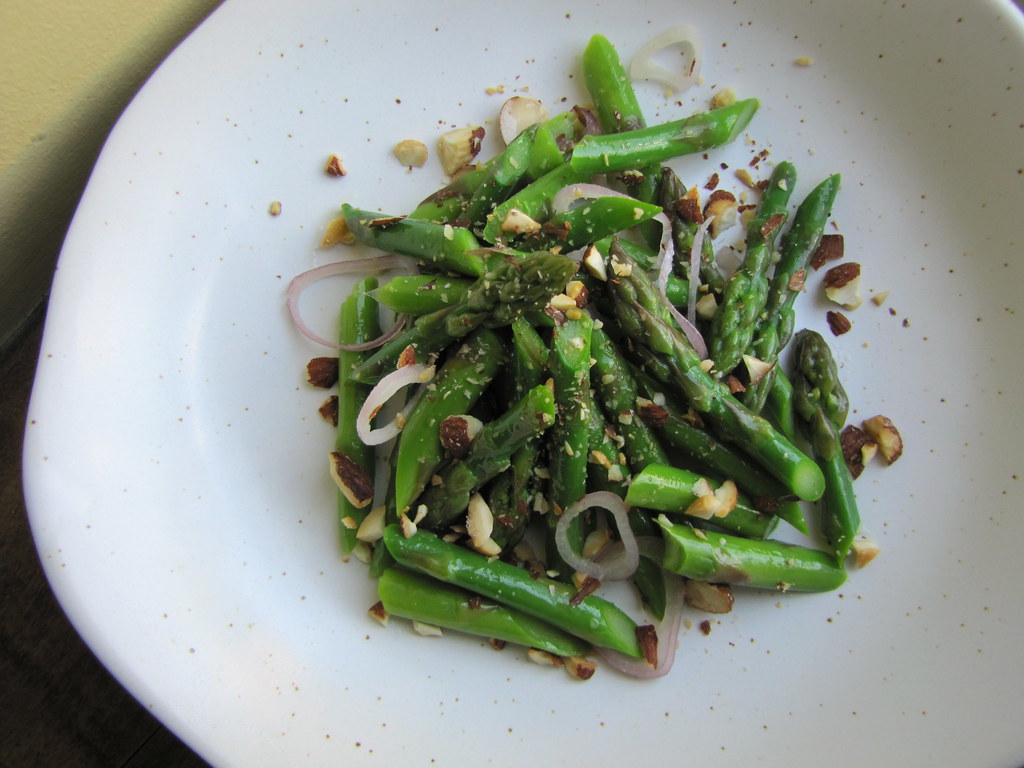 There are a few famous bedfellows for asparagus, when cooking it simply as a side. One is Hollandaise sauce. Shaved parmesan and a poached egg a la Milanese tradition has very much taken root in restaurants here. A faction of moms only dress asparagus with grated, hard-boiled eggs, according to some friends. And not that everything hasn’t been wrapped with bacon, but a bundle of stalks secured with a strip has become quite notorious, too. Now, there are few things I think couldn’t be ten times better with a runny egg placed on top of it, ready to poke (sometimes, transforming something insubstantial into recipe–writing worthy), but what else might do this spring veggie well?


It’s a question that never fails to entertain me in the kitchen. And I’ll bet it does many, despite the list of contrivances I offered above. To be honest, when asparagus is young and crisp, just in season and fresh from the ground it was snipped from shortly before cooking it, you barely need anything with it at all. Some salt and high heat to give it some caramelization, perhaps. But I recently discovered this happy combination involving crushed, roasted almonds and thin rings of shallot, and I don’t think I’ll be falling back on other habits anytime soon. And, without the assistance of cheese, eggs or meat, which is in all three of the aforementioned, this way of serving asparagus is totally vegan-friendly and lean. 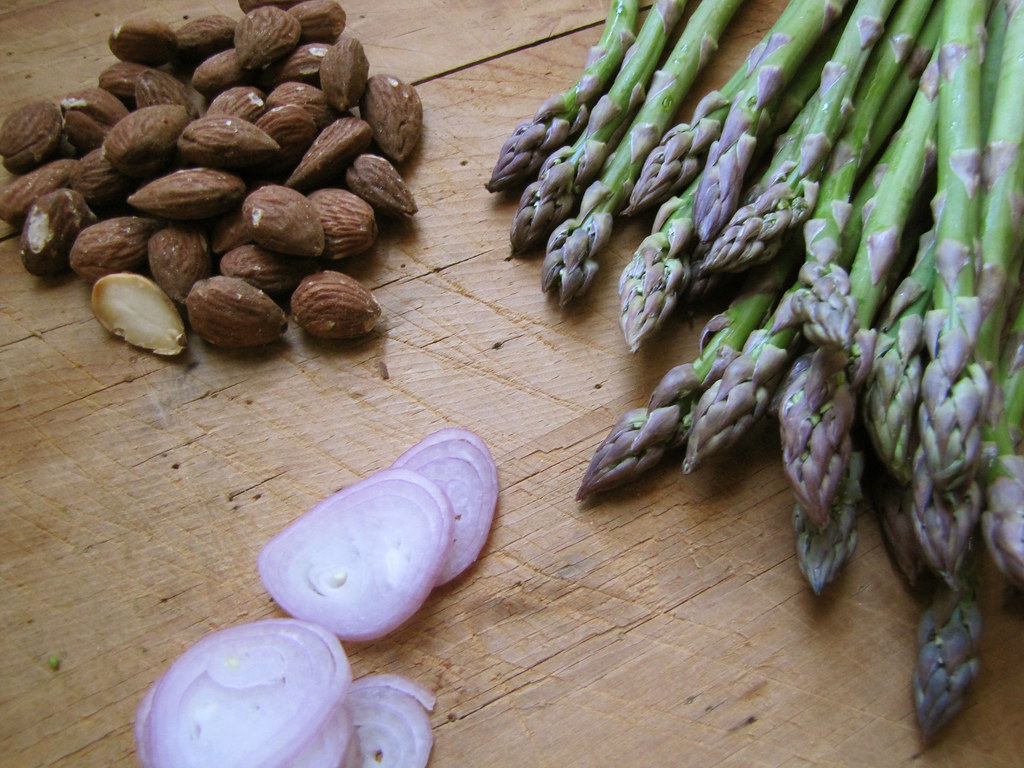 It starts with barely-cooked asparagus, the freshest you can get. See tight, purplish crowns on top instead of sagged and deep-greenish? That’s the way you want them to be. If they have lots of bruising and discoloration at the points you’ll want to move on from them, for sure. No matter how thick or thin the stalks are, as long as they’re super-fresh, they’ll taste pretty good. Bad asparagus is just counteractive to this plan — which is merely decorating some really fine specimen. 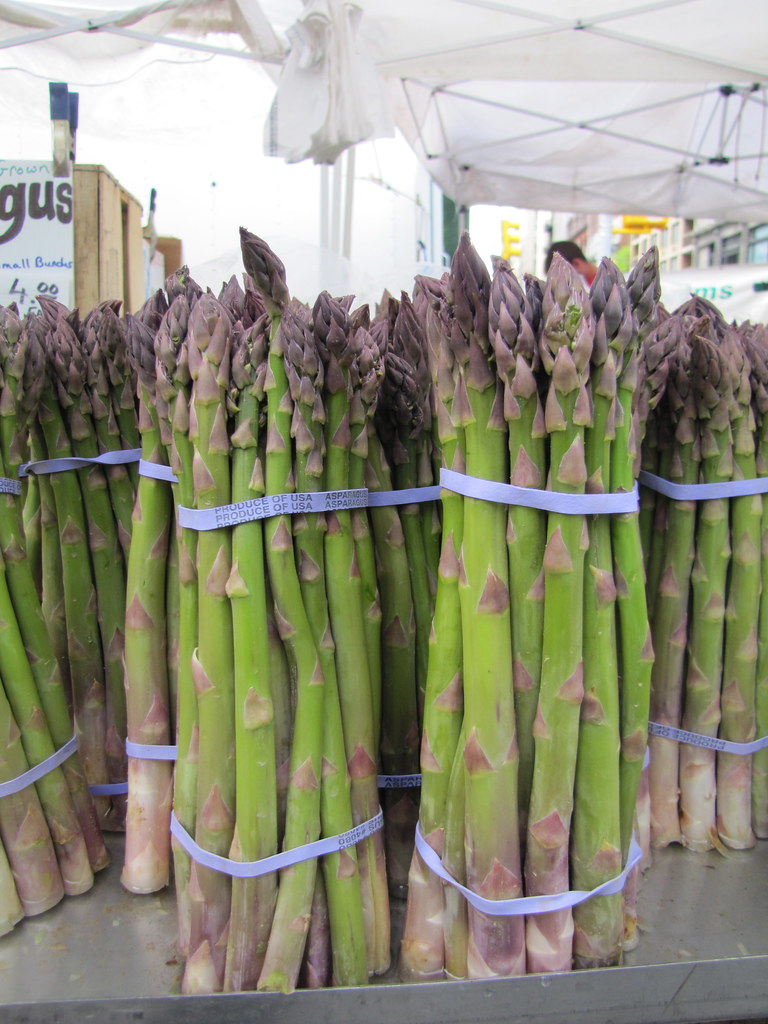 fresh bunches at the Greenmarket 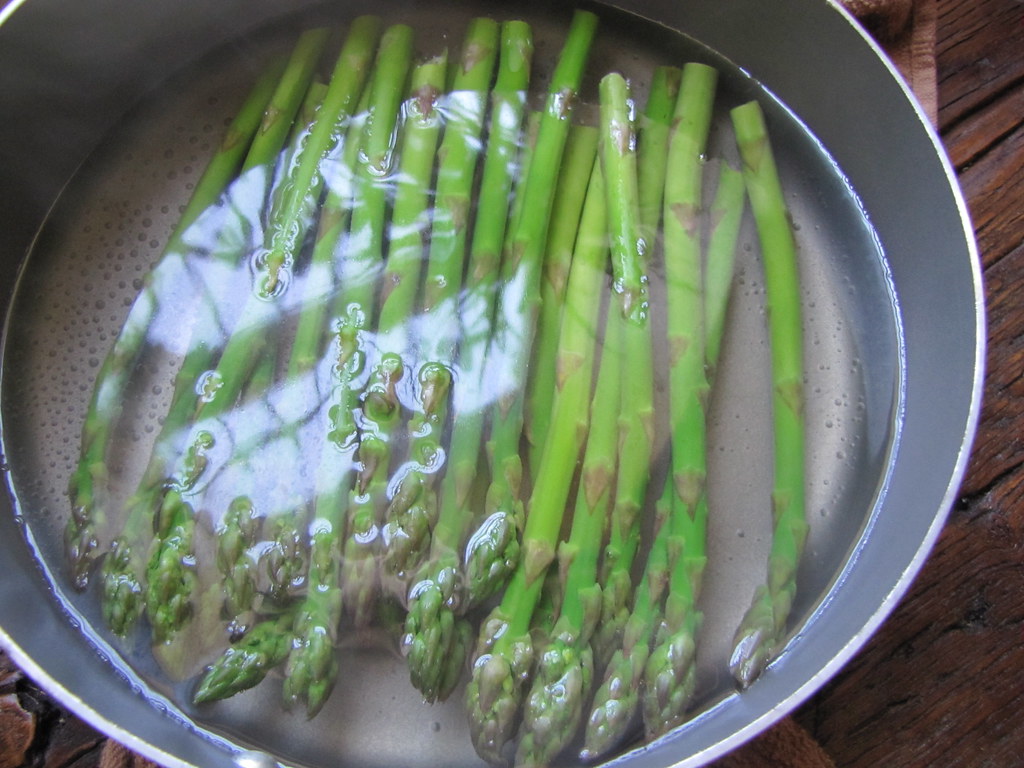 going for a quick dip in boiling-hot water


Next, I boiled them for a ten-Mississippi count and transferred them to an ice water bath, also known as blanching them. The number of Mississippis you’ll want to count off actually depends on the width of your asparagus, so if they’re fatter than a pencil, then it’ll be a few more. Be sure to have your ice bath ready to place the asparagus in once the time’s up, and a pair of tongs greatly helps, too. Just run cold water from the faucet directly into your asparagus bath if you screw up, and pour some boiling water into it, like I did.

Patted down and dry, the stalks are then cut on a bias into bite-size logs, and tossed with fresh lemon juice, olive oil and salt. And, sure, add the shallots now, sliced straight across. When it’s tasted, seasoned just right and on a plate, hit it with the crushed almonds. Toss once more, and serve. 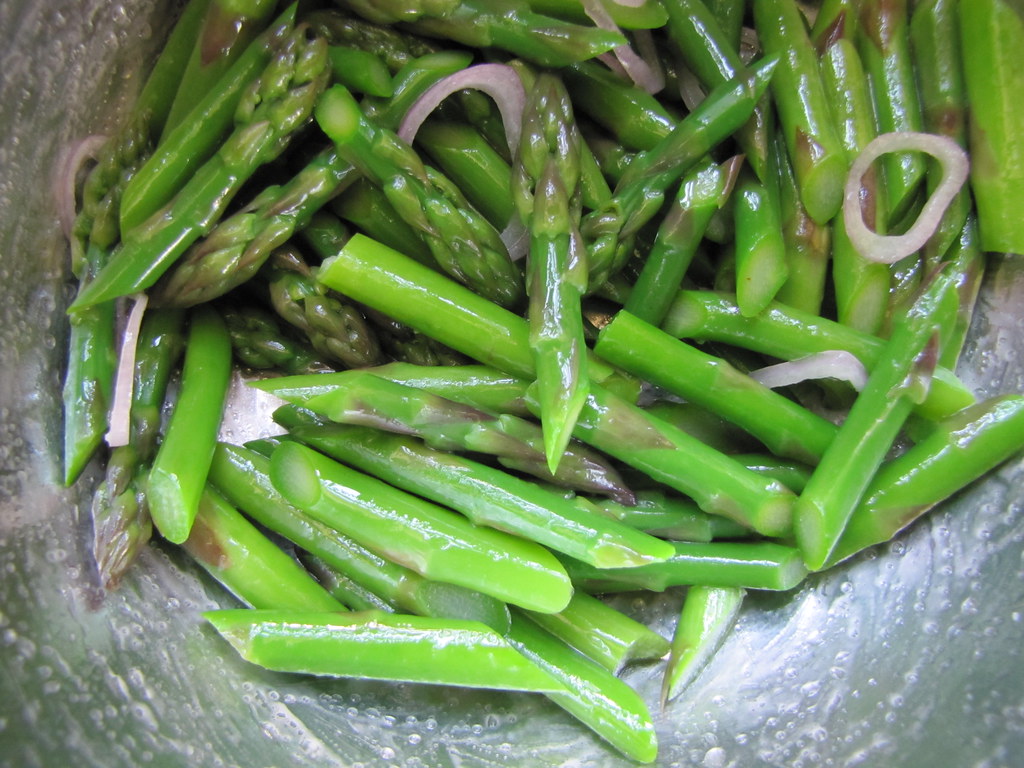 all dressed and ready 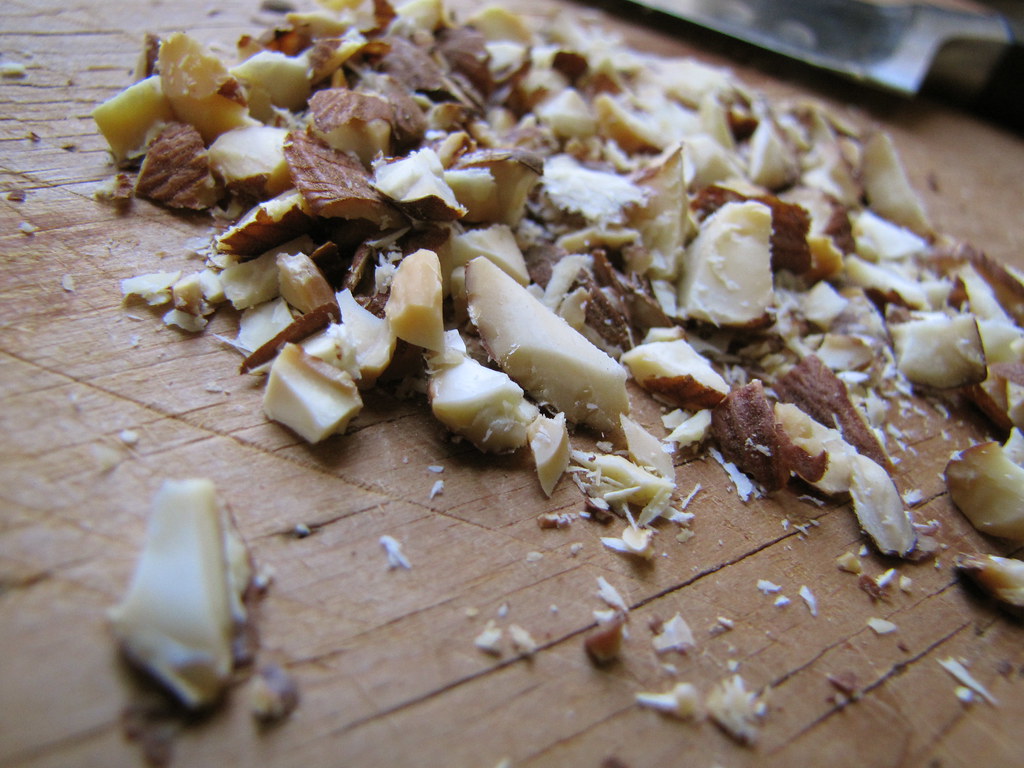 Crunchy and satisfying, roasted almonds blend seamlessly here for added texture, without an overpowering flavor. I just love ’em. Asparagus is so mild-tasting — it’s kind of like biting into a watery stem — especially cooked this way, that you’ll still get to experience their delicate grassiness, beneath their lemony coating. Embrace that while it lasts, asparagus season’s not forever. And hope you find many more ways to bolster it, too. 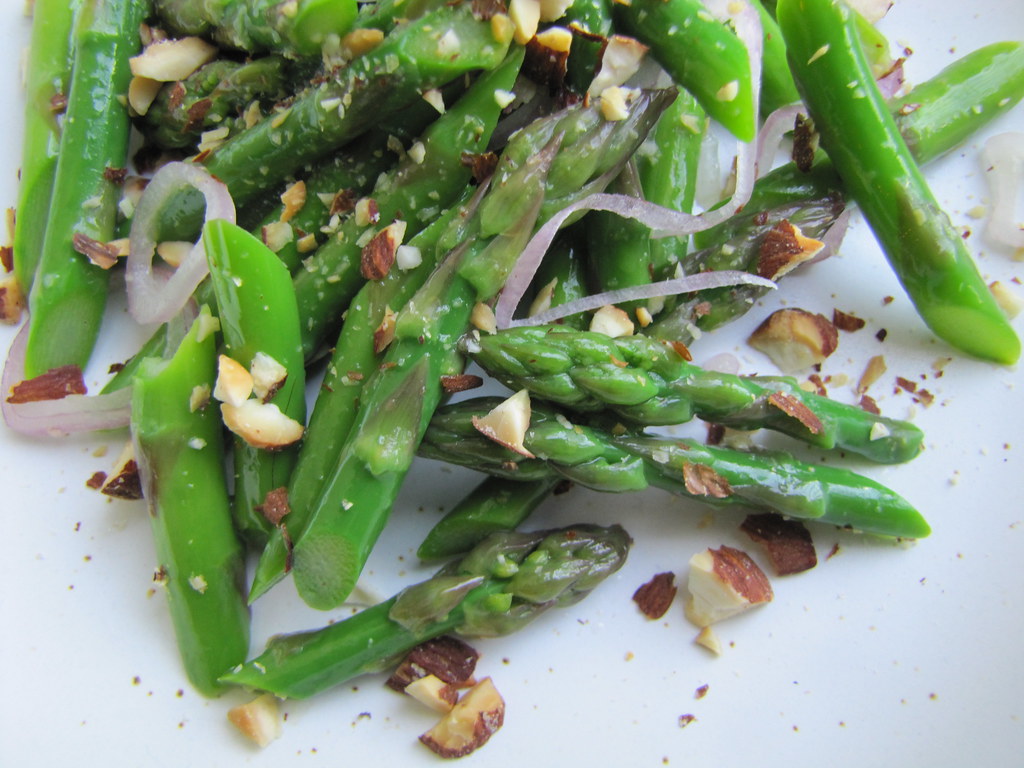 Bring a large, wide pan of water to a boil. Meanwhile, prepare a bowl filled with ice cubes and water to transfer the asparagus to. Boil the asparagus for 30 seconds to 1 minute, depending on how thick the stalks are. Transfer immediately to the ice water bath. Let cool about 2-3 minutes. Pat dry and chop stalks to roughy 1-inch pieces, cutting on a bias if desired.

Toss the asparagus and shallots in a medium bowl with the lemon juice, a couple tablespoons or more of olive oil, and a few pinches of salt and pepper. Taste for seasoning. Add the crushed almonds, toss once more and serve.

Two brownie points. Feel happy the rest of the day after polishing this off. Not only is it comprised mostly of asparagus, a super food with antioxidants, beta-carotene, potassium and folate. And it’s exceptionally low in calories. Almonds are some of the lowest-fat nuts, so it’s a much less caloric (though probably no less fulfilling) addition here than pine nuts, or pecans. Still, they’ve got protein in them as well.

Eight maple trees: This is turning out to be one of the “best” recipes according to scorecard here in a while. Most of this dish’s ingredients were locally grown, the asparagus, that is, and shallot. The rest of them, the lemon, almonds, salt and pepper, were most likely not. But provenance aside, the almonds are also a terrific, more energy-efficient and humane alternative to industrial agriculture animal meat.