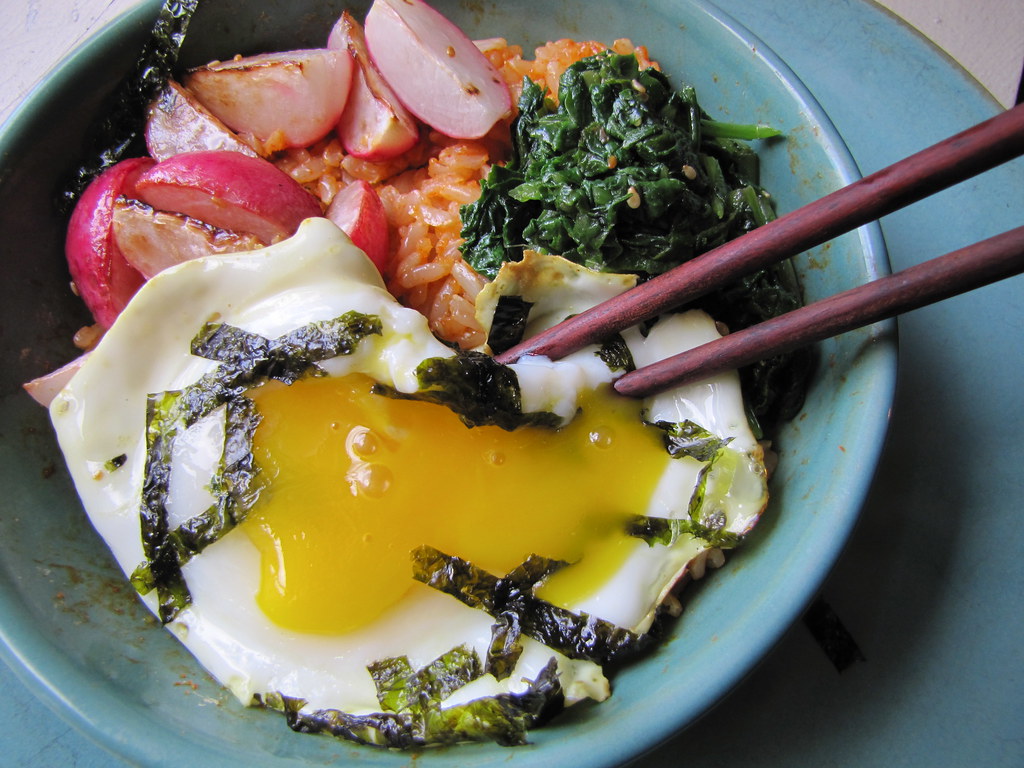 If that isn’t the most fun food name to pronounce, I don’t know what is. Bibimbap is lots of fun to make, too. It simply means, “mixed rice” in Korean and it’s an everyday, meal-in-one-bowl. Any vegetables you have on hand will do; you can marinate some sliced meat and sautee it to add, too. Then you just assemble everything on the rice, add a dollop of spicy gochujang and an egg to pop. You can mix in a little more than that, add fancier steps like grilling, or hot stone bowls that still cook. But that’s the basic swing of things — it’s the bibim bop, can you dig?


I can. Even though I only had some radishes for this round. To be sure, bibimbap is less of an exact dish than a serving suggestion, with its open-ended ingredient list. So I took the liberty of using just one, really — radishes — in addition to the customary fried egg. But guess what? When you get a bunch of them with their greens still intact, you’ve actually bought two veggies for the price of one. Radish greens may not be the best, or least bitter and tough leafy greens of them all. But they’re still wickedly nutritious, and I don’t mind the slight, hairy scruff on the surface of these leaves once sauteed. Go ahead and discard the hoariest ones of the bunch, any bruised or yellowed bits, too. One bunch of radishes should give you just the right amount to cook down in a quick sautee for something like this. 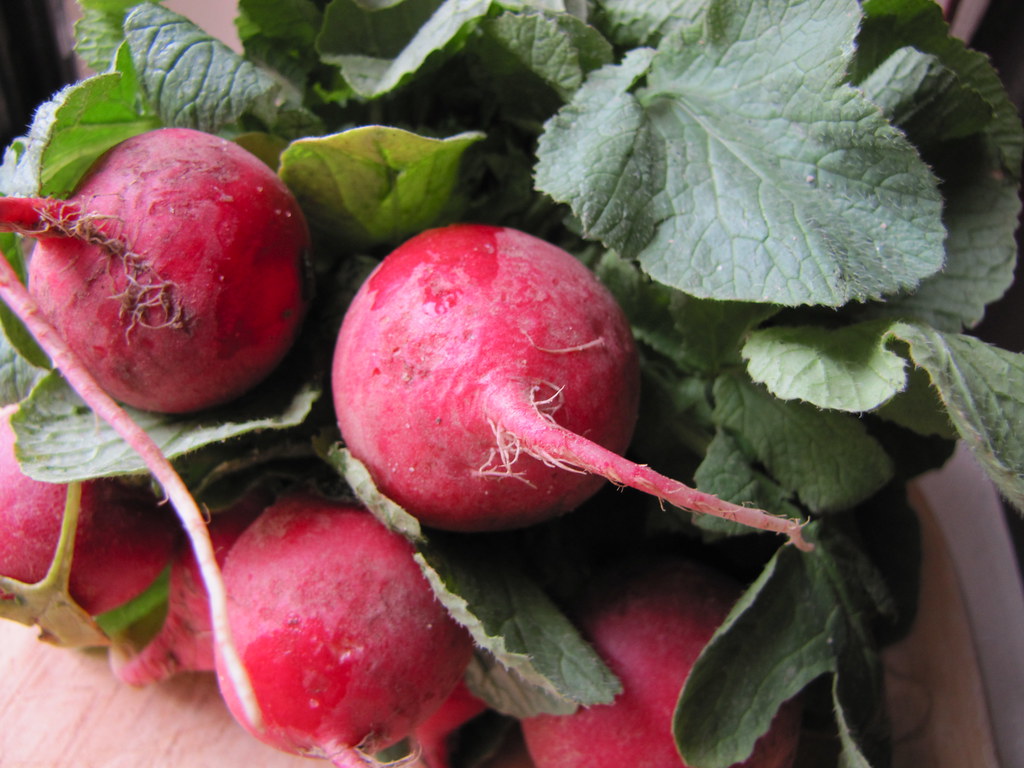 a bunch of radishes

As for the radishes themselves, any way you like ’em is fair game. Raw and sliced, or lightly sauteed, they’re a crisp, fresh-tasting addition. Radishes, what an underrated and versatile root. 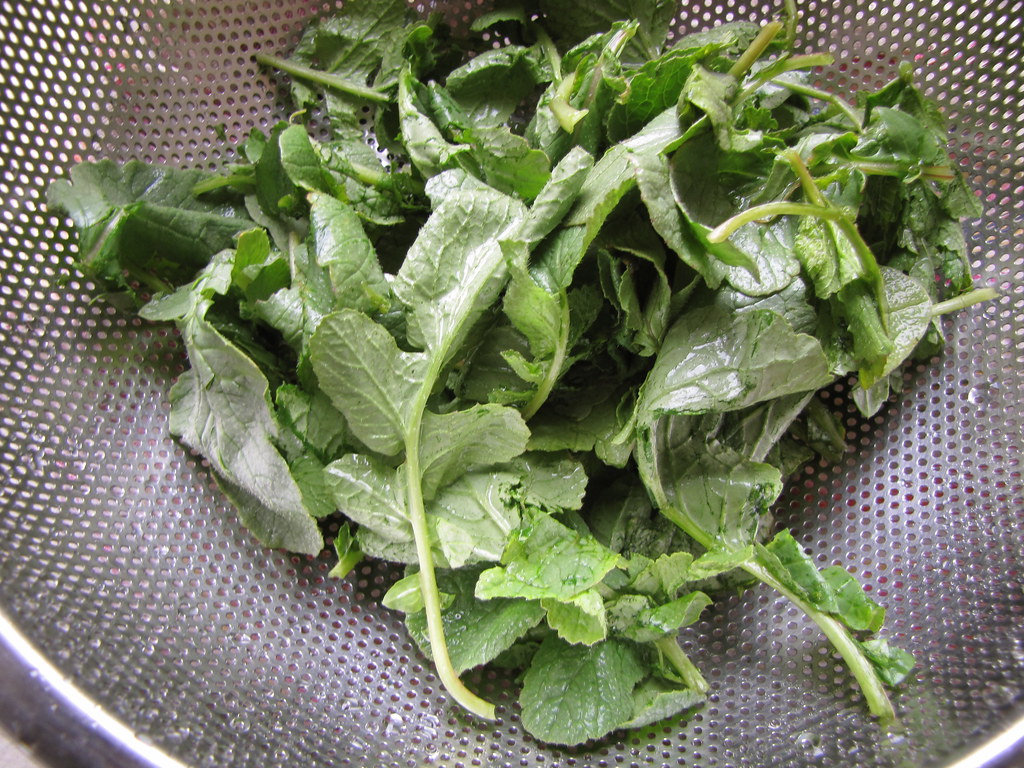 broken down to its tops 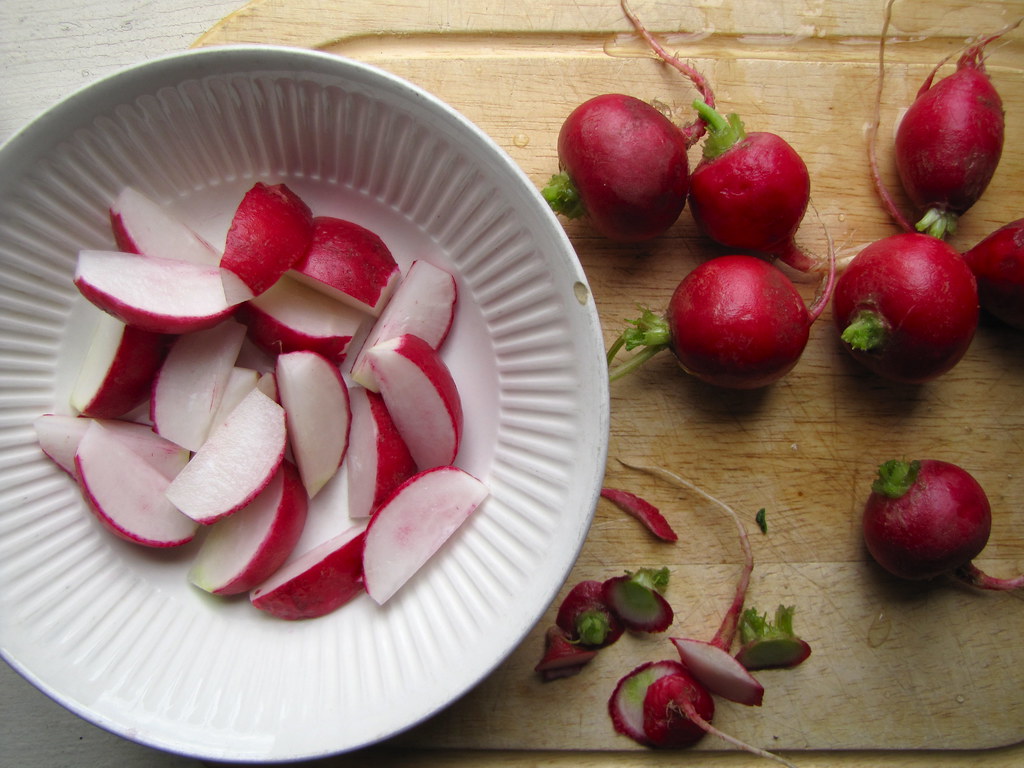 These were the common sparkler radishes that I’d gotten at Grand Army Plaza Greenmarket last Saturday. With a mild peppery flavor and watery white flesh with a thin and perfectly edible red skin, it’s no wonder they’re the go-to variety, despite there being so many different radish types. I love the way the reddish-magenta dye streaks a little when slicing through them, and their rotund little shape. Instead of slicing them into flat discs, I prefer to cut wedges, just to see them a bit differently. And for this dish, I gave those clean, white pieces a bit of golden crust from a pan. Better to julienne them if you wish to serve them fresh. 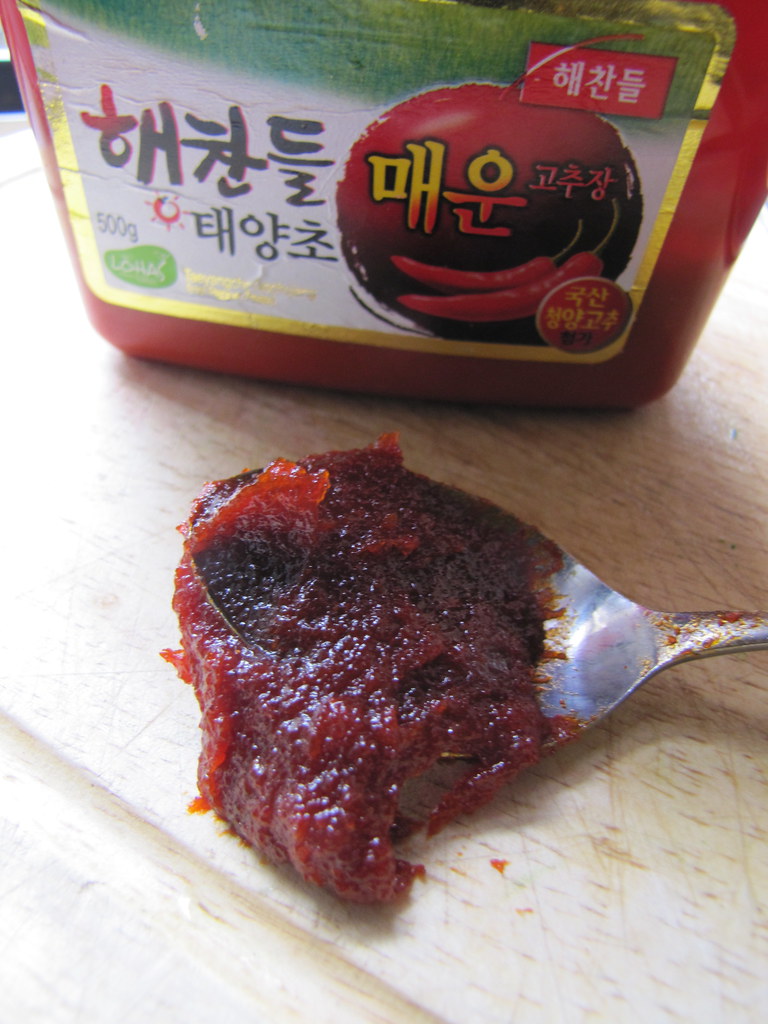 To get started on assembling this, cook the rice or reheat some that was leftover. A short-grain variety with a little stickiness would be the typical Korean rice to use, but you don’t have to if you prefer other types, like brown rice, which I do. The only thing that really makes this bowl bibimbap, instead of just “anything with rice,” is the certain Korean chile paste that gets mixed in with it, gochujuang. Made from dried Korean chiles and fermented beans, among many other things, it has a dark, smoky, and sweet complexity of flavors that is really unlike anything else. Spicy, it definitely is, too. It’s an ultra thick paste and it’ll stain everything in its path brick red. A little spoonful is all you’ll need per bowl, but size it to your own taste. Arrange the vegetables and meats you’ve cooked or cut up on top of the rice, and give yourself a scoop of this stuff to mix in.

The last addition to the bowl is adding a sunny side-up fried egg on top. I’ve been enjoying the huge, ridiculously orange-yolked ones from Flying Pigs Farm lately. The fresher the eggs, the easier they seem to fry — the whites don’t spill all over the entire pan. 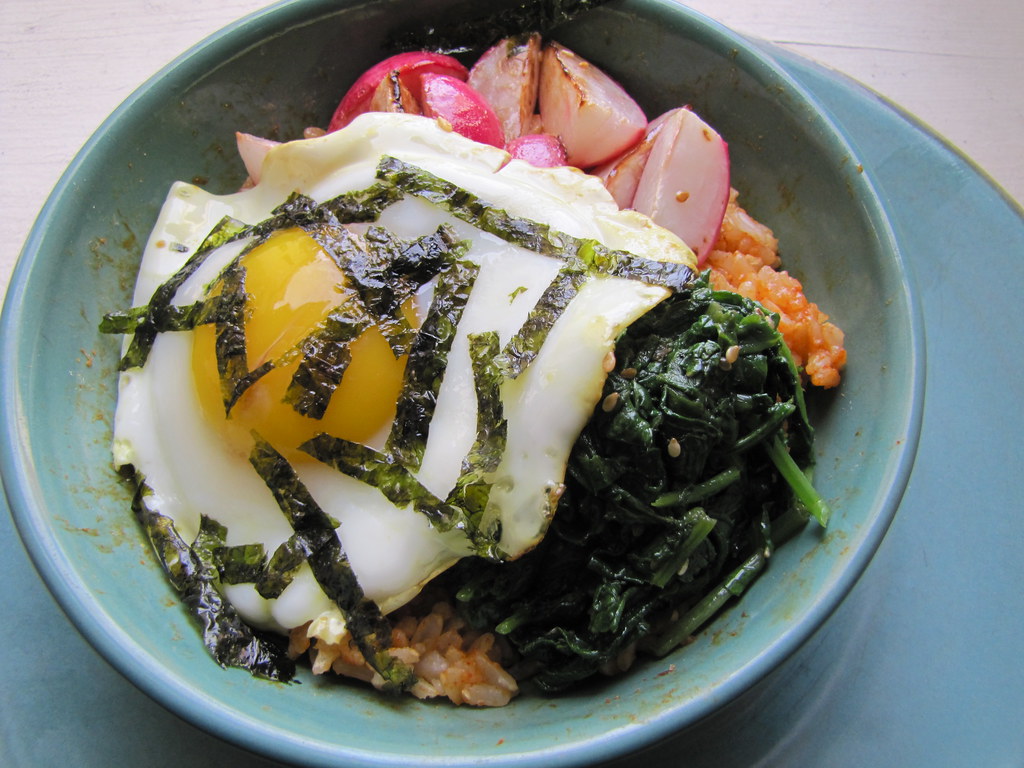 the whole bowl, with a garnish of nori seaweed and sesame seeds (optional)

If you’re accustomed to having this dish in restaurants in a hot bowl that creates a beautiful crisped edge to the rice as you eat, you won’t get the same effect at home unless you have the proper equipment. I’m sure it’s neither too expensive nor hard to find, a stone bowl that can be preheated to 400+ degrees. Anyone with any suggestions on those, please fire away. But as a tiny-cupboard kitchen person, I’m hesitant to invest. For investigation’s sake, I tried to achieve something like this by preheating a regular, earthenware bowl in my home. But I only cranked up the oven to 350F, for fear it would break. Though it was hot, and the ingredients sizzled against its sides, the bowl still did not make the rice crispy, as hoped. Ah well, it still tasted really good, all the same.

Heat a heavy-bottomed or cast-iron pan. Add about 1 tablespoon vegetable oil and once hot, place down radishes on their cut sides. Don’t turn until after a minute, or once the bottom edges have slightly browned in parts. Turn and lightly brown on the other sides. Remove from pan. Add the radish greens and cook, stirring, occasionally, for 2-3 minutes. Remove from pan. Add additional vegetable oil and fry the egg sunny-side up.

Arrange rice in a serving bowl with the radishes and radish greens in small piles on top. Place the dollop of gochujang in the center. Once the egg is cooked, transfer to the bowl. Garnish with optional sesame seeds and nori slices, and serve immediately.

Three brownie points: It’s always a good sign when a dish is really colorful. Not only is this one really efficient meal to make, a good way to use up leftover rice and anything else on its way out, but it’s an efficient way to get all your food groups in one pop. At its most minimal preparation, which this one would surely be amongst, there is protein from the egg, and detoxifying and immune-boosting vitamins from the leafy radish greens. The radish roots contribute potassium, Vitamin C, and a health dose of nutrients for very few calories, too. Why only eat such small slices of them at a time?

Seven maple leaves: It’s a good way to cook whatever you might have locally in season. Because it requires so little — or can require so little — meat, it’s a good way to use sustainable, responsibly raised animal proteins and not break your bank. Here, the radishes were some of the first bright red bunches of the spring, brought in from New Jersey to Grand Army Plaza Greenmarket last weekend. The egg was from upstate farm Flying Pigs, known primarily for their incredible pork. Can’t go wrong either way.