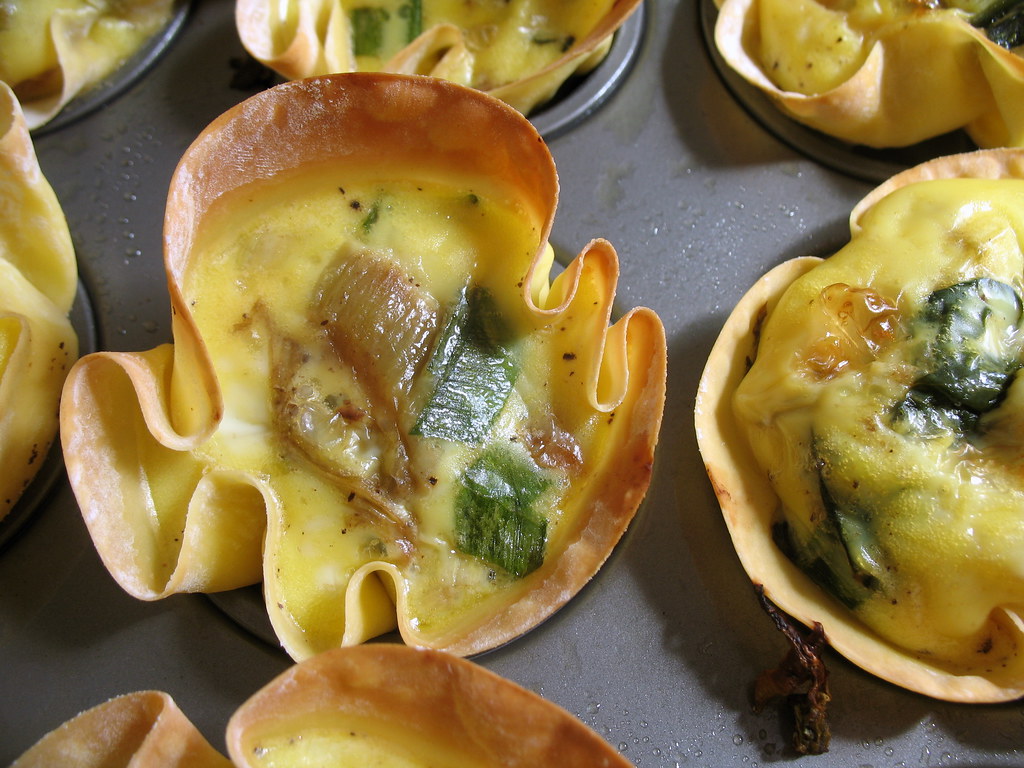 This was once stated by an old roommate of mine. Genetically handed down or not, we all sometimes have mental blocks with kitchen skills. I found that I don’t have the patience to fillet a fish property, opting to throw in the towel and just cook it whole after a recent fishing trip. “I can’t cook rice” is another commonly voiced one. But with something as open-ended as cooking eggs, this boycott is really too bad. It eliminates a lot of great foods to make with them, but most of all, crosses out one heck of a cheap, quick and easy to prepare protein from the time and money-crunched home cook’s repertoire. And that’s not cool by me.


How could this common food, which typically weighs under three ounces, baffle this intelligent, otherwise kitchen-capable young woman and her mother? I wondered back then. Eggs can be cooked in a multitude of ways, and the only thing essential to this is heat. Then why are there so many how-to’s and minute details when it comes to doing just that? Because there is an incredible range regarding just how sophisticated you want to get about it. Julia Child dedicated a recipe to hard-boiling them in The Way to Cook which involves several steps, ice and lots of time; Jacques Pepin has advocated a rather tricky method of puncturing the soft point of the egg before boiling on his PBS show; and today’s food science-savvy chefs prefer knowing the exact temperature of their yolks, using an immersion circulator to let them bob around in. There’s a lot of ways to get geeky about egg-cooking, but for the casual cook or beginner, this can be intimidating. 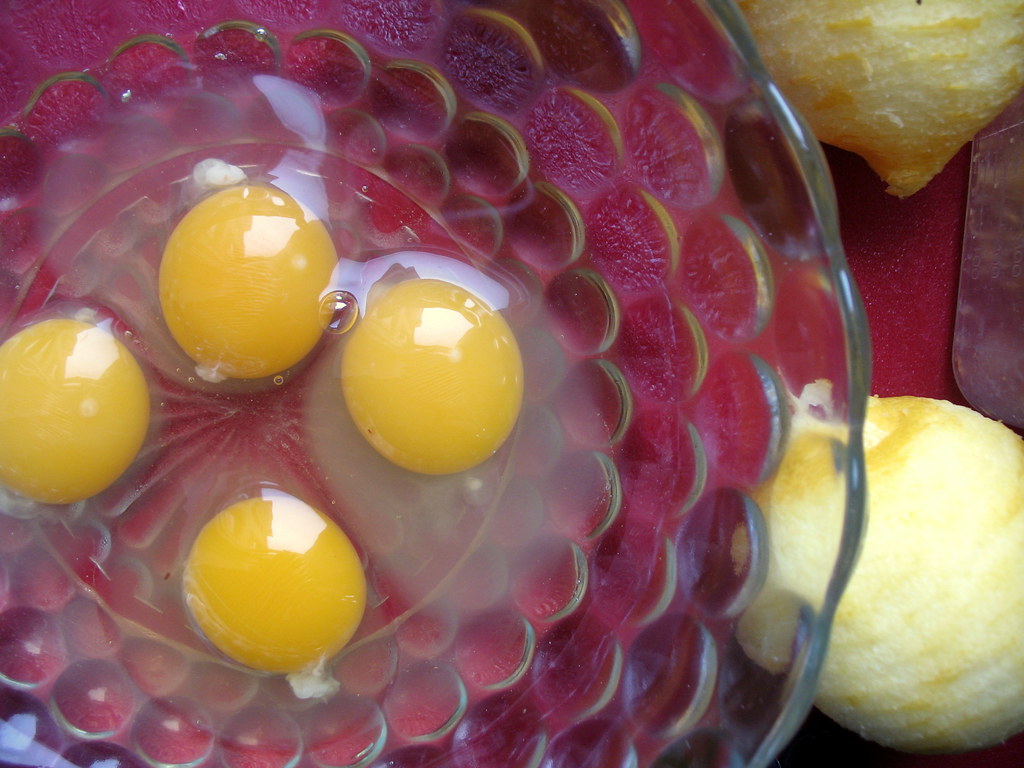 eggs before beating into lemon bars

Then, there’s a strange relationship our culture seems to have with the poultry ovum. Due to a farmy tradition that does not apply to most people anymore, we think of eggs as breakfast food, and tend to only crave them on their own in the morning. (This doesn’t apply to blending eggs into cake batter, or fresh pasta.) I’m not convinced an omelette can’t make a satisfying meal past four o’clock p.m. myself, it’s not like it turns into a pumpkin. Secondly, there’s been a lot of fussing and flip-flopping about the health benefits of eggs over the past few decades. One minute, “experts” say they’re high in cholesterol; the next, that they’re rich with omega-3’s. Avoid yolks and eat egg whites; get cage-free eggs with much fattier yolks instead. And then, salmonella scare! For fear of not fully cooking eggs, I know many people who avoided it altogether. All this confusion has led to various micr0-phenomena and products such as “Egg Beaters” and the Dunkin’ Donuts’ egg white breakfast wraps at one end of the spectrum, and on the other, perhaps, a resurgence in brunch. By now, hopefully we all know that eggs (and both parts of them) are perfectly natural players a well-balanced diet, and Egg Beaters are just creepy. 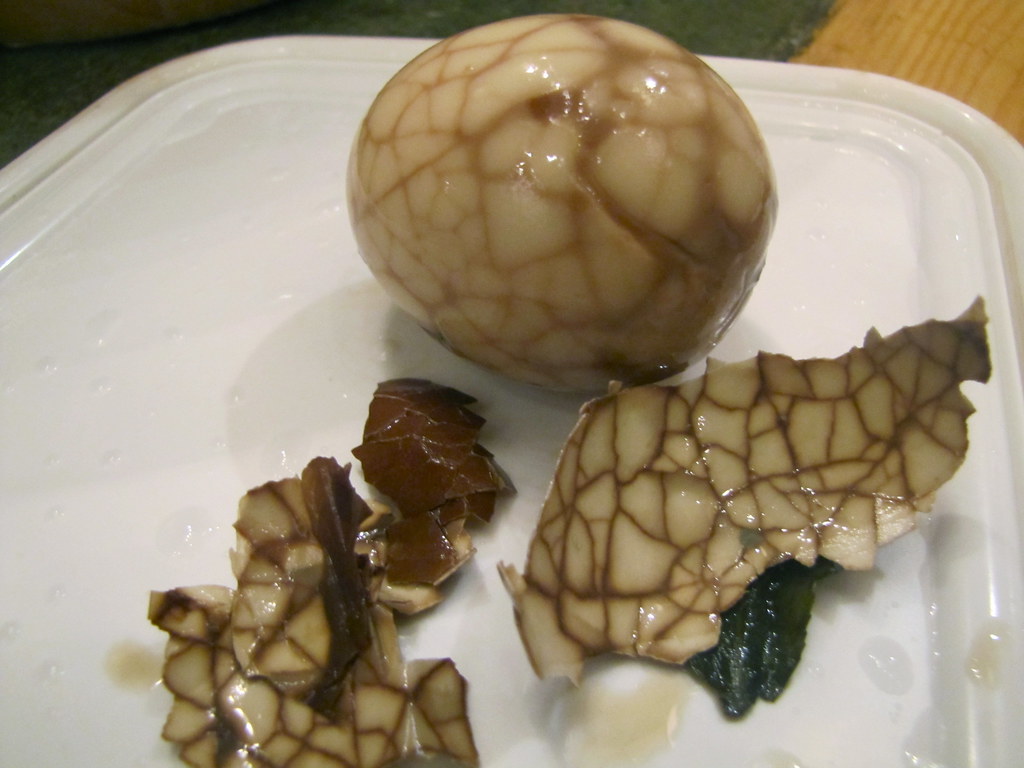 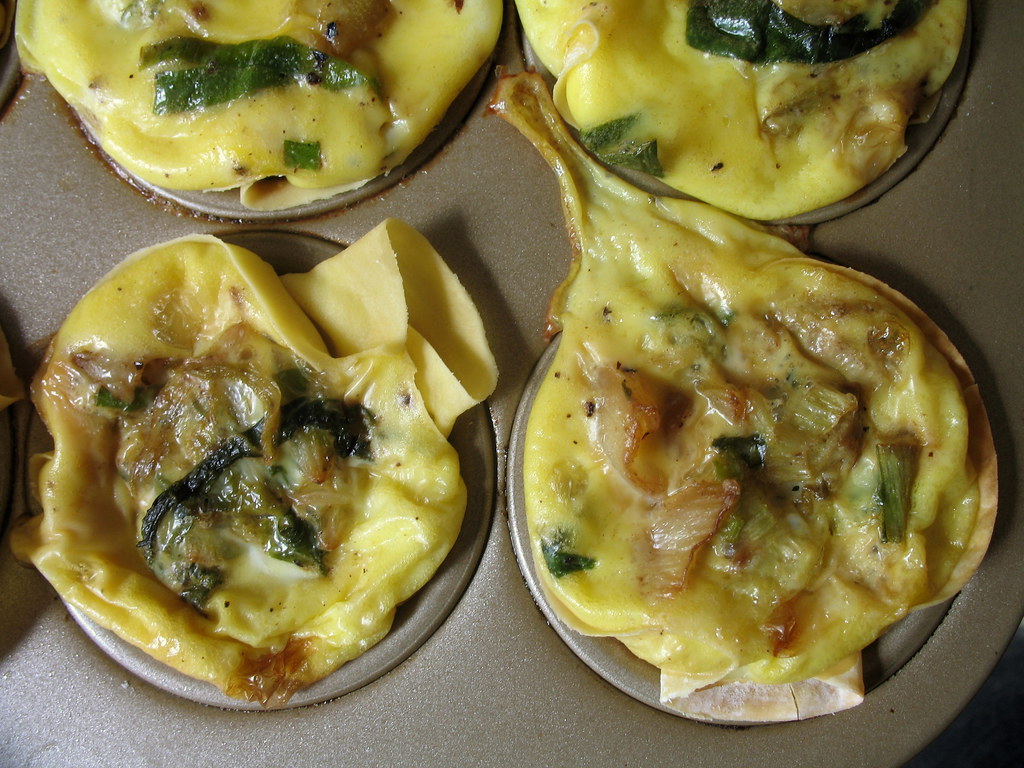 another batch of an old favorite, wonton wrapper mini quiches

It’s understandable why my old roommate had some reservations over the simple snack — or breakfast, lunch or dinner food. It’s about time we peel back the non-mystery behind eggs, and embrace how easy and inventive its cooked creations can be. Au naturel, eggs have very little taste. They seem to scream for you to do something creative with them. Anything added to a scrambled egg mixture seems to sing. I’m a fan of frittatas, scrambled steamed eggs with fillings, and quiche, like the crispy mini quiches baked in wonton wrappers, which I’ve made several times since the original post and most recently for a Hapa Kitchen dinner hors d’oeuvres, with roasted red pepper and chevre. At that dinner, we also cooked Chinese “tea leaf eggs” (cha ye dan) to slice in a nicoise-inspired salad. Tea leaf eggs are hard-boiled, then cracked all across the shell’s surface, and left to simmer in a bath of Chinese five-spice, soy sauce and black tea for hours. The resulting egg has a distinctive crackled pattern stained into the white, as well as flavor from the broth. 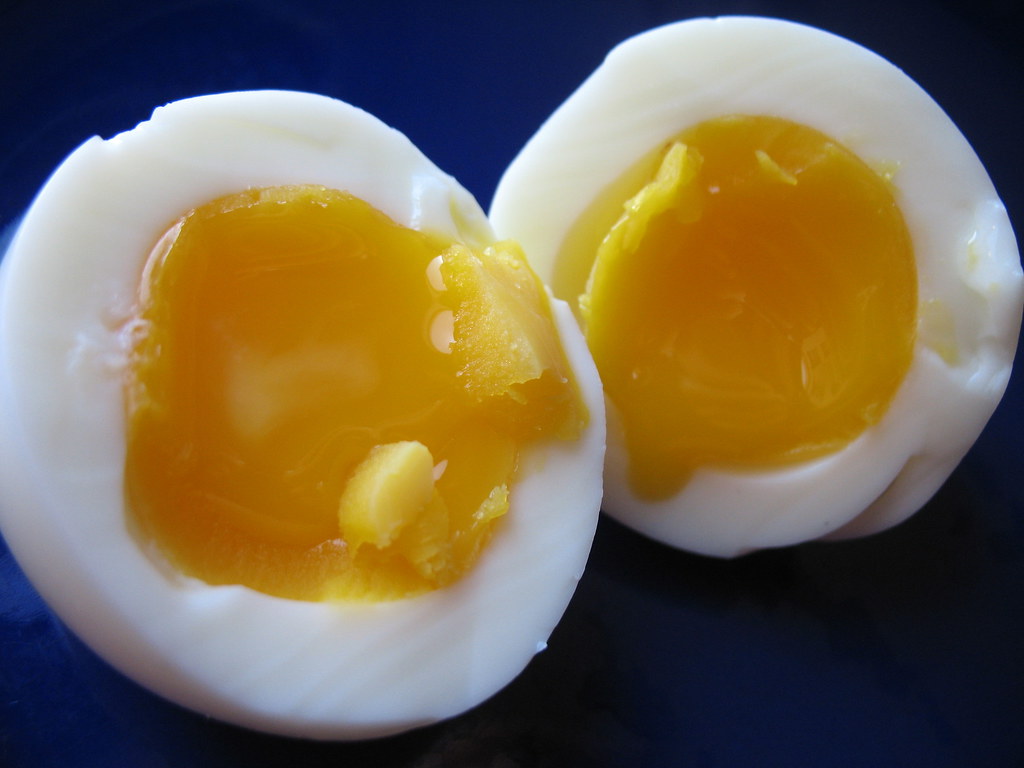 a wee mistake when “hard-boiling” eggs for an egg salad

I can offer suggestions, recipes and rants like this one, but knowing “how” to cook an egg only comes with practice and observation. It’s a trial and error system, and it’s incredibly variable, depending on what you’re doing with them and how well-cooked you like them. There are too many uses for eggs to count, too — from binding to fluffing agents in baking or meatball-making, main-dish protein to invisible aspect of dessert, they’re an indispensable part of any cuisine’s canon. They frequently offer a restaurant diner some measure of choice when it comes to ordering breakfast: you can have them “any way.” When cooking at home you can have even more creative liberty with them. And once you have a few “ways” down pat, you’ll be set for quick and easy meals anytime with protein.

They’re not cholesterol-free, as the nutritionist movement has made us well aware of. They’re not something you necessarily want to eat four of each day. But they’re filling, and for an animal-based protein, did I mention cheap? Even cage-free eggs (which are truly superior to the industry standard, in both taste and animal-friendliness) cost significantly less than a portion of meat. Vegans, I know you’re left out here. But in case you convert to ovo-eating sometime in the future, don’t be turned away if first attempts at cooking go awry.

Give a man a fish, feed him for a day. I’m about teaching a busy, thrifty, urban roommate to cook an egg instead. She really likes them anyway.