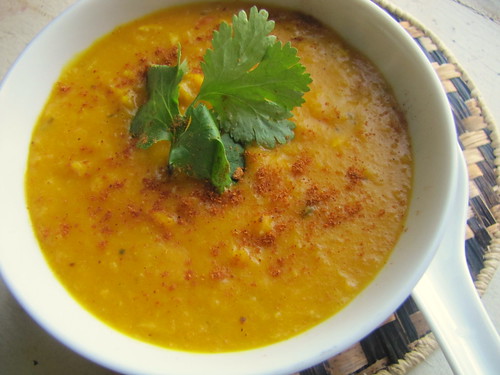 Another soup, is it? Yes, indeed. Sometimes you just gotta do — and cook — what feels right. And spending this past gusty weekend sniffing and sneezing beneath scarves and wearing sweats around the apartment just spelled “soup’s on” to me. Not only is hot soup therapeutic to eat, but I wouldn’t be the first one to say that breathing in the fragrant steam of something gently simmering in the kitchen for an entire afternoon is a good way to get out from under the weather, too (nor would this be the first time I’ve said this). Even if it’s just a simple vegetable stock, which I made a great batch of, and used some of for this wholly vegetarian soup. It’s my new chicken soup, for the soul, body and tastebuds, and especially with its hint of spice.

Alright, so maybe I didn’t spend my entire last weekend puttering around in sweats; the many fine folks who came out to The Gutter on Sunday for the first-ever Food Obstructions would have seen differently. But I had a great time, and co-hosts Karol, David and Jon at the Gutter all agreed that it was a success. A recap of the cook-off will be coming up, along with an announcement about the next Food Obstructions. But in case you weren’t there, here’s a random spoiler: the third-place award went to a Thai curry butternut squash soup. 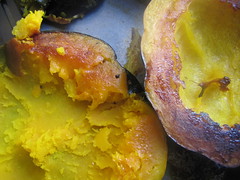 I wasn’t surprised when he placed; his soup was great, and I had recently made a similar curry-spiked squash soup for friends, which went over very well by them. So it looks like squash in a spicy, coconutty curry soup is an idea that’s earned the approval of the masses. If you haven’t tried something like this yet, I’d say chances are good that you’ll enjoy it, too — in sickness or in health.

The great thing about this soup is that you can flavor it with whatever type of curry blend you prefer. There’s a whole world to choose from, spice-wise, when you use the word, “curry.” The contestant at the Food Obstructions, Spencer, chose to spike his soup with a Thai red curry blend and made sure to give it plenty of heat. I’d gone for a milder touch of Indian spices for my first batch of this soup, a few weeks back. This time around, I gave the soup a Sri Lankan spin with a rich, roasted spice blend, courtesy of Skiz Fernando. 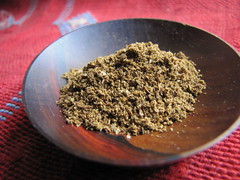 Going back to the curry conundrum for a moment, the word actually denotes curry leaves, just one ingredient in any number of flavorful South and Southeast Asian dishes that we (for some poorly interpreted reason) call “curries.” Curry leaves aren’t present in every curry, nor is it always present in the curries that are most popular in the West. So it’s rather non-sequitor that the word has come to represent such a broad range of foods throughout the East in the West. (This I learned from the ever-wise and outspoken cooking instructor Geetika Khanna.) But since the word is unanimously used, that’s moot point; I just wanted to bring it up as more reason to start embracing and discerning between different types of curries, like this Sri Lankan blend.

The soup I made this (sick, sneezy) weekend was surprisingly different from the last batch. Visibly, the ground Sri Lankan spice mixture I used is very different indeed. It has a darker brown all-over cast, thanks to its being well roasted; and a very earthy flavor that’s not so spicy. Sri Lankan curry often employs a little toasted rice, for that earthy, grainy flavor and texture (check out this recipe for a good round-up of the rest), and the mixture I had was no exception. I’d met the cookbook author, food blogger, all-around passionate foodie Skiz Fernando at the Curry Takedown a few months back (yes, no kidding). His delicious Sri Lankan chicken curry didn’t win any awards that day, but you couldn’t find a frown on this guy throughout the eighty-degree afternoon as he served up his steaming curry. Nor after the awards, as he chatted about his online spice store and various other projects. I received a bottle of his finest — the roasted Sri Lankan curry blend — in the mail a few weeks later. Throughout the hot summer couldn’t see it fit to sprinkle into all those cool curry salads I was in the habit of eating, because its texture is a little coarse. But then, I can see this being a perfect dry-rub or marinade for meats, and of course, it worked brilliantly in this butternut squash soup. Not too spicy, but complex in flavor. Just a little pinch did the trick.

Skiz says that his eighty-two year old aunt is his biggest curry critic, but it was actually her maid who had taught him to make really good curry powder. So when Skiz appeared on the Sri Lankan episode of No Reservations, it was this lady who’d made the crab curry for Anthony Bourdain. Of course, Skiz has strong ties to his mother’s cooking, too, just like anyone else would. But now, his mother admits that Skiz’s own cooking is much better than hers. So check this stuff out, proud moms out there. Or anyone, really, who’d like to try a taste of authentic Sri Lankan curry. 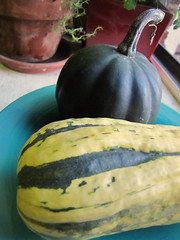 Just as it’s perfectly fine to swap different types of curries in this soup, so it is with the squash. I can’t remember what type of squash went into the first batch, actually — I think it was a variety from Garden of Eve farm. As long as it’s ripe, with a firm, dense texture and often the color orange or yellow, I like to treat most squashes pretty much the same. That is, either slice it in half, scoop out the seeds, and place it cut side-down on an oiled baking sheet to roast until tender; or chop into cubes and scatter on a roasting pan coated in oil for a quick cook (turning once) until crispy. Method A is what you’ll want to do for soup.

Instead of butter or cream, the delicious flavor of coconut milk lends a really bright, nutty note to this soup. As well as a squeeze of lemon juice stirred in close to serving time. For an eye-catching spin, I served a couple bowls of this recently with a pool of just coconut milk (warmed in a separate pot) in the center of each bowl. Orange and white contrast might not be the most beautiful, but it’s the flavor here that really stands out.

Preheat oven to 400 degrees. Slice the squash in half and scoop out the seeds and pulp with a spoon. Save for another use or discard. Spread about 1 tablespoon vegetable oil on the bottom of a roasting tray and place the squash halves cut side-down on the tray. Roast for about 30 minutes, or until the flesh feels soft when poked and it has shrunken away from the skins a bit. Flip over and let cool. Once cool enough to handle, scoop out all the flesh and reserve in a bowl.

Meanwhile, heat a heavy-bottomed pot with another tablespoon or so of vegetable oil and sweat the onions over medium-low heat. Season with salt and pepper and cook until translucent, about 8 minutes, stirring occasionally. Add the curry powder, optional cayenne, chopped tomato and garlic and cook, stirring occasionally, another 4-5 minutes. Add the roasted squash, coconut milk and vegetable stock. Stir to combine thoroughly and bring just to a boil. Reduce heat to a simmer and cook, covered, for about 20 minutes or so. Using a hand blender, puree the soup to a smooth consistency (this can also be done by transferring the soup in batches to a food processor or blender). Taste for seasoning. Add additional stock or coconut milk if it’s too thick to your liking. Once the soup is to preferred taste and consistency, stir in the lemon juice to taste and serve.

Cost Calculator
(for about 8 servings)

Five brownie points: Mashed squash is the bulk of this bowl of soup, so you can rest assured after eating one that you’ll have had your share of beta-carotene, Vitamin A, Vitamin C and so many more vital, orangey nutrients. Butternut and other winter squashes are naturally sweet gourds, so there’s a fair amount of sugars. The coconut milk here adds saturated nut fats instead of rich cholesterol in cream and butter, which is what you’ll find in many creamy vegetable soups, squash no exception. Rather than think of it as one evil over the other, there’s benefits to both — and coconut has some unique ones like the antiviral lauric acid.

Six brownie points: Once again, it’s mostly squash, and these are just in season from the local farms. You’ll find many more choices of squash varieties at the Greenmarket or specialty farm stands than the grocery store, in my experience, and that’s a fun seasonal activity alone. The imported coconut milk and California lemon in this recipe are not quite on par with seasonality nor locality; at least the tomato was the last one from my CSA.