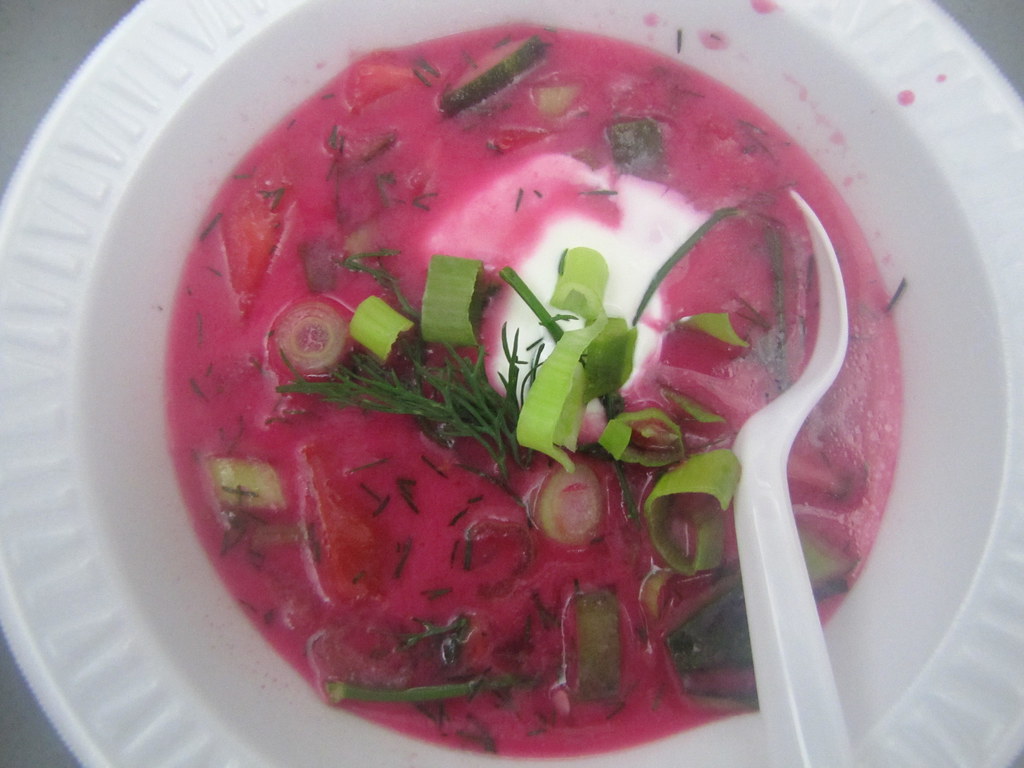 Okay, it’s not summer anymore, and Indian summer has not yet arrived. Instead, this is about the time of year people start taking flu shots, and sweaters and scarfs out from hibernation boxes and changing their sheets to flannel. I do all these things minus the flu shots. But I do have a good way to boost the immune — fresh veggies and bloody, bloody, antioxidant-rich beets. To keep that blood pumping.


“Flu borscht” just didn’t sound like a very good name, though. Summer borscht is actually what the recipe’s creator, Jui Shih, named this soup herself. It’s fresh and light like a summery breeze from chunky chopped tomatoes, cucumbers and dill; it has the zing of red wine vinegar, lemon juice, plain yogurt and sour cream; and a crisp finish of scallions and chives. And it’s served chilled, or room temperature. It’s sort of like gazpacho, but with beets.

Jui created this soup as part of a four-course meal that was cooked at the Greenpoint Reformed Church soup kitchen last Wednesday. It was the grand finale-feast of the project that Noah Berland and myself devised called the Souper Douper Sandwich Cook-Off: the cook-off, in which any home cook shared their best sandwich and soup combinations with attendees, and friendly competition amongst themselves for prizes, took place in August. The second act was this meal, which the winner planned and executed the menu of. With the guidance of Ann Kansfield, director of the Greenpoint Interfaith Food Team, we served about 80 hungry members of the local community in Brooklyn, and about a dozen soup kitchen volunteer staff members. So hats off to Jui, for her thoughtful menu and hours of work on this. Thanks also everyone who competed at the cook-off and those who bought a ticket to eat there, because it was through their participation that we funded the ingredients for this soup kitchen dinner. Most of all, thanks to the great team of volnteers who cranked this one out. Together, and over two nights, Jui, Noah, Emily Hanhan, Mike O’Neill, Lori Budnick and I cooked and served the meal, and I personally had a blast. Here’s a quick look at some of the preparation:

That was the main course, in the video — stuffed cabbage. Inside was a mixture of ground chicken, rice, diced red pepper and onions, and once rolled up in blanched cabbage leaves, it was drenched in a savory tomato sauce and baked. This was quite a different meal altogether than the one that Jui had won the Souperdouper Sandwich Cook-Off with. Scrapping the sandwich concept entirely, she decided to focus on the cuisine of the community — Polish. Greenpoint, Brooklyn is predominantly Polish, and many of the people who come to eat at this church’s soup kitchen are, too. So she wanted to serve them some familiar fare, but with her own twists. Along with the cabbage rolls, she came up with some incredibly tasty potato and turnip latkes, served with homemade applesauce and sour cream, this summery take on beet borscht (recipe below), and a dessert of crepes with fresh fruit compote and homemade vanilla ice cream. Okay, so maybe the sweets weren’t that Polish. But they were certainly a highlight. 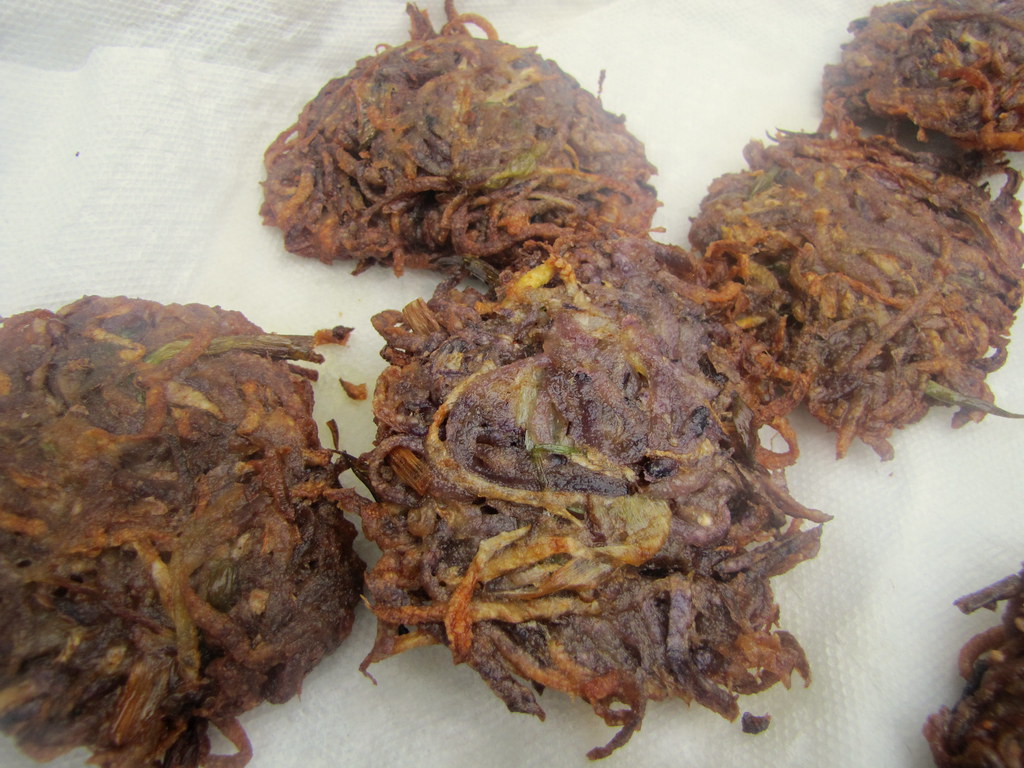 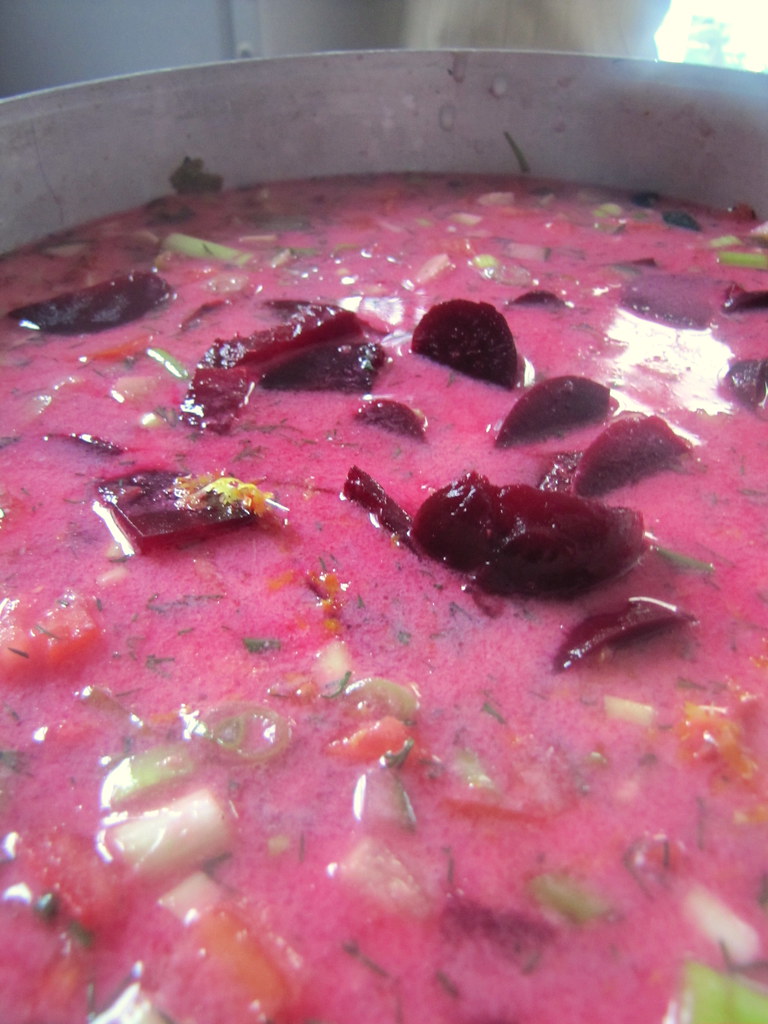 a big pot of the summer borscht 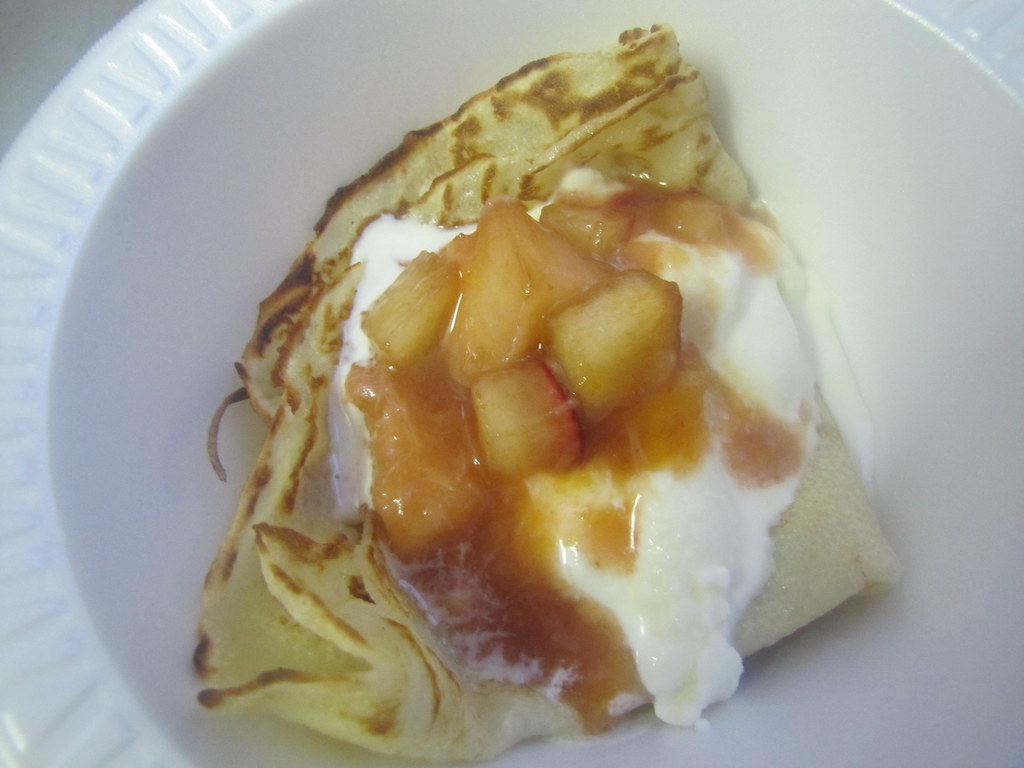 Some of the vegetables that we were able to use for this dinner included those from Garden of Eve Farm, whose CSA pick-up location in Greenpoint happens to be this same church. The Greenpoint Interfaith Food Team regularly gets to cook with these leftovers, as well as receives donations of food from nearby businesses, and other local farms. Jui had originally wanted to shred up sweet potatoes for the latkes, for instance, but when CSA pick-up day left behind a few pounds of purple fingerlings, as well as some turnips, it was purple potato latkes with shredded turnips instead. Fried in a shallow bath of cooking oil, these were just irresistible. Of course, healthiness is a factor for all the meals that are served at the soup kitchen, but deliciousness of this one was really a special treat. 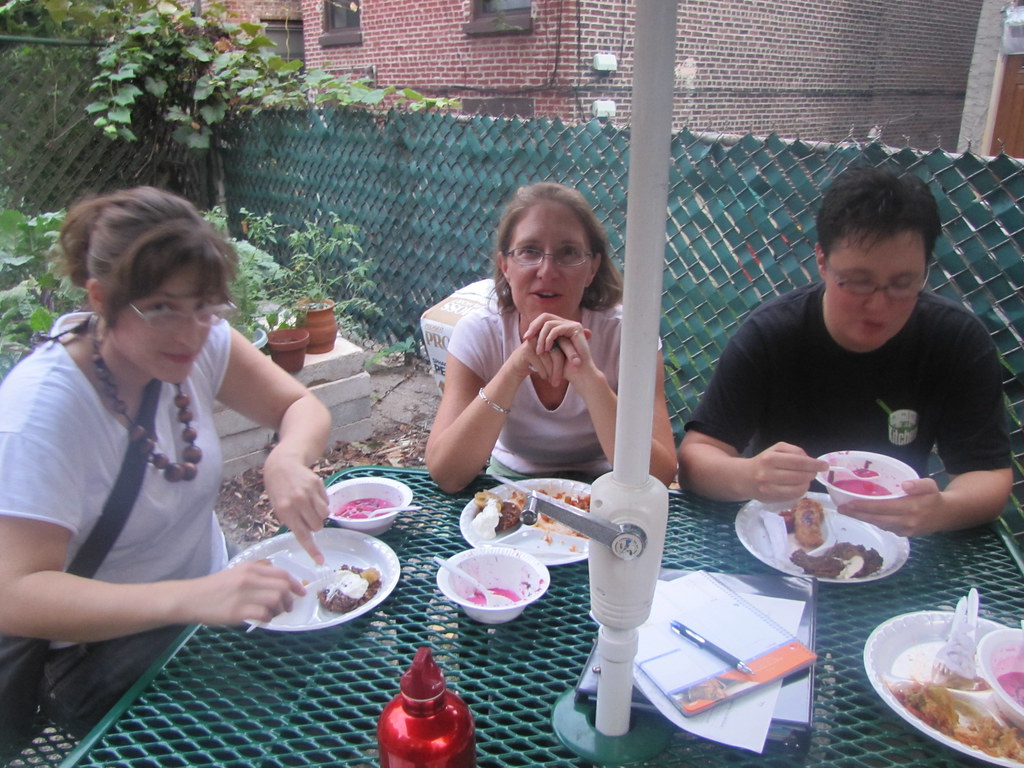 If you’re wondering why there aren’t photos of the needy people whom we served that night, it’s intentional, and out of respect for their privacy. Albeit I’ve only done this just once, it’s been a very gratifying experience volunteering in a soup kitchen, and completely different from any large-group food event I’ve cooked for before. The most exciting part of this night was, because the staff and eaters had all been pleased with the outcome (the staff actually got to have a meeting that night, instead of working around the clock!), we may turn this guest-chef concept at this church’s soup kitchen into a more frequent series. Bimonthly, perhaps, with different menu-planners at each one using their creativity to feed the people who could really use it the most. We’re still in the brainstorming phases and open to thoughts, so if you’d like to participate, please speak up! And if you think you have what it takes to top Jui’s chef-excellence, I dare you! Professional chefs, out there, that includes you, too…

Reserve any juices from the beets, tomatoes and cucumbers while chopping and combine them in a large pot or bowl with the broth and yogurt. Add the vinegar, dill, a pinch of salt and pepper, and taste. Sugar can be added to cut the acidity as well, to taste. Add optional lemon juice and anything else to taste. Top each bowl with optional garnishes of chopped scallions or chives, extra dill, and/or a scoop of sour cream.