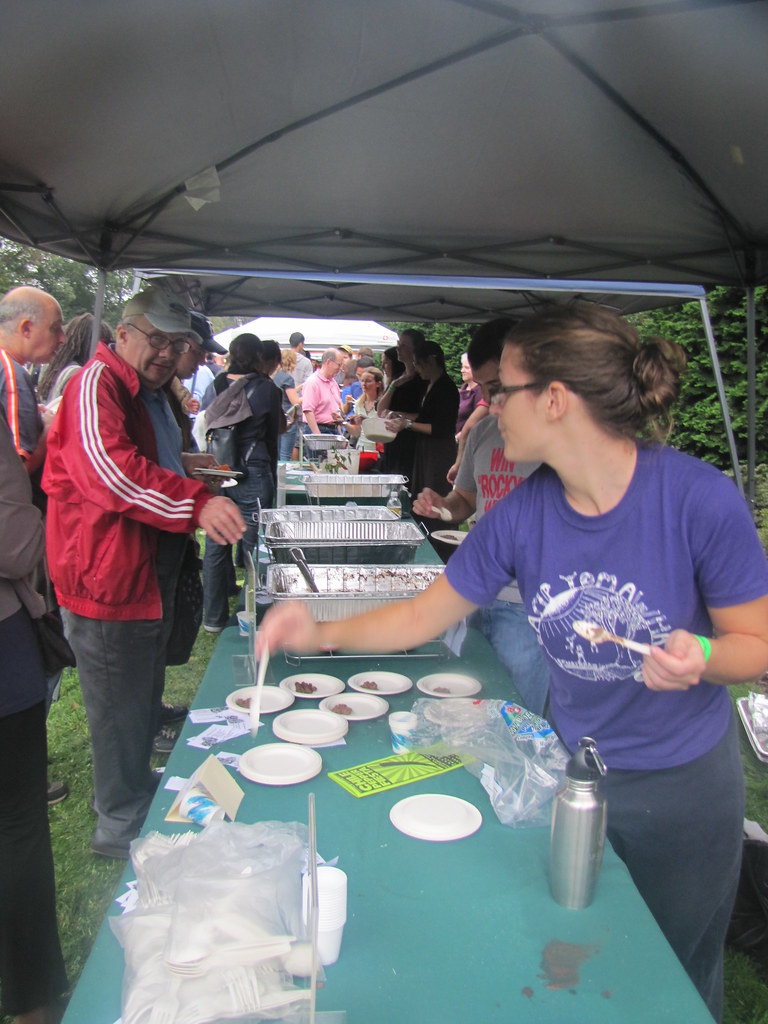 You can’t exactly sit through a restaurant meal and claim to have the best culinary know-how of a group by pooh-poohing this, or extolling that. Well, maybe you can to an extent, and many people do — and I have, too. But it’s much more convincing, in my opinion, if you walk into a social setting with your own homemade dish, and compare it against those of all the others in the room, who did the same. And that’s what I’m speaking to in this Reason, perhaps long overdue: the competitive aspect of eating in.


It’s not a compulsory part about cooking, but if you’re proud and searching for appreciation of your food, you’ll find many opportunities to get it at amateur cook-offs. This is where the talk turns into actual, edible tokens. Can a person truly be a foodie if they can’t cook at all? I see some problems with this. On the other hand, I’ve learned from going to countless cook-offs that a person can be completely normal, or not food-obsessed in every aspect of their daily life — he or she might be a teacher, a banker, a set designer, and might rarely have the chance to exercise it — but be a total, blow-the-competition-out-of-the-water champion when it comes to making chili. (Or fill-in-the-blank homemade food.) Seeing this sleeper culinary expertise in action is one of my favorite things about cook-offs. Or anything. 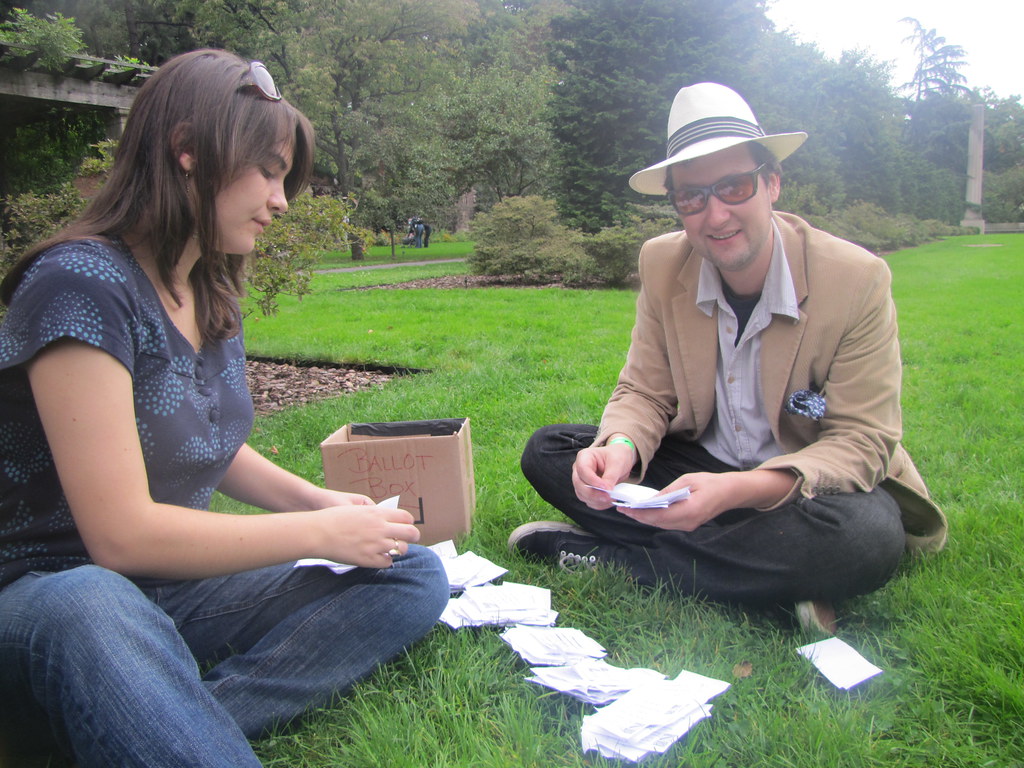 Yes, Brooklyn loves the sport of competitive cooking. And it should not be surprising to anyone who may have read more than five posts on this blog, but so do I. I recently sat across from a fellow volunteer at a community farm, who began talking excitedly about all these cool cook-offs in Brooklyn she’d read about, and it turned out that she could trace each mention of them to my writing (in Edible Brooklyn and here). She sounded a little bit skeptical after making that discovery, but I don’t think there’s any question about the popularity of competitive cooking in this city — especially judging from the swarms of people who attended the back-to-back Takedowns this weekend (first, at the Brooklyn Botanic Garden‘s Chile Pepper Fiesta, and the next day, at the Lamb Takedown). It’s a big ticket, these small-time cook-offs. And it draws in more and more home chefs hoping to impress. 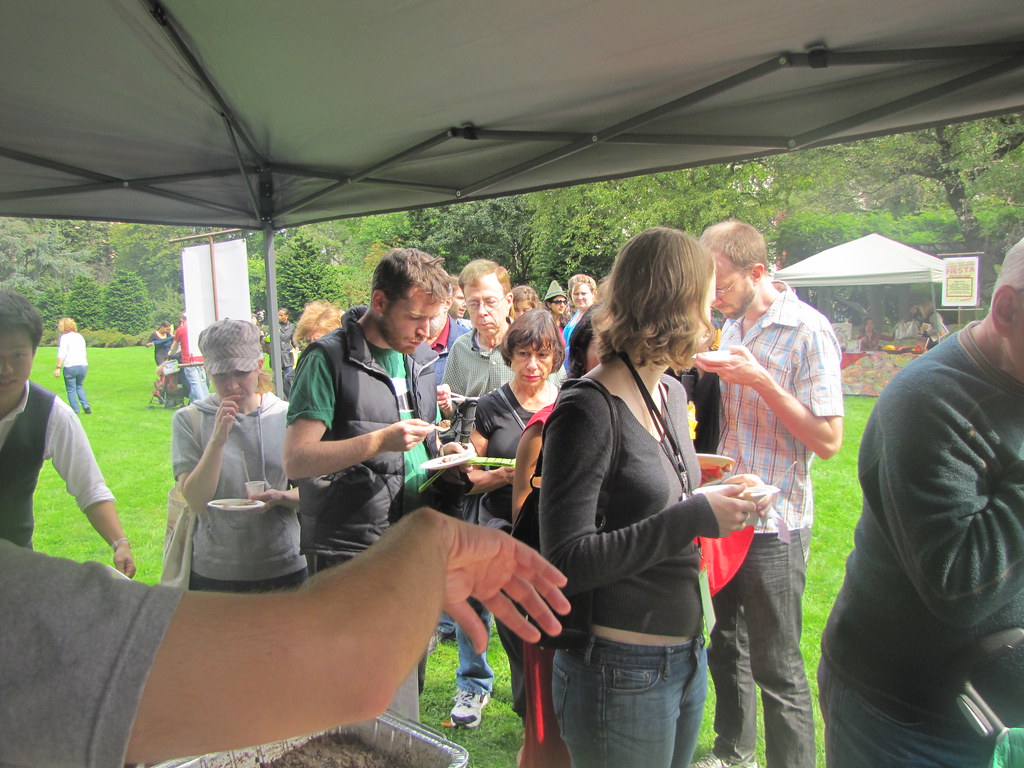 On Saturday, I stood beside a new contendor like this as we served our concoctions at the Chile Pepper Fiesta Chocolate & Chile Takedown. A former chef who now had an office job, he had decided to play up the chocolate and chile-based food theme (and only requirement of this contest — that our dishes have both elements) by entering handmade raviolis stuffed with braised short ribs and topped with a thick, mole sauce. How he came up with that concept is just another completely unique phenomenon on display at the event. Among the six home cooks who also competed, everyone had their own ideas about how best to represent chocolate and chiles. Some opted for sweets kicked up with spice — there was a chocolate and chile bread pudding, a dense, chocolate ice cream with ginger cookies to serve, and another chile pepper-flavored ice cream was topped with sweet chile marmalade and served on pancakes. Others went for mostly savory dishes with a surprising sweet element — like my neighbor Olin’s ravioli, Dan’s chocolately, meaty, spicy stew, and my deep-fried, cornmeal-crusted, sweet pepper “poppers” stuffed with dark chocolate and cream cheese. 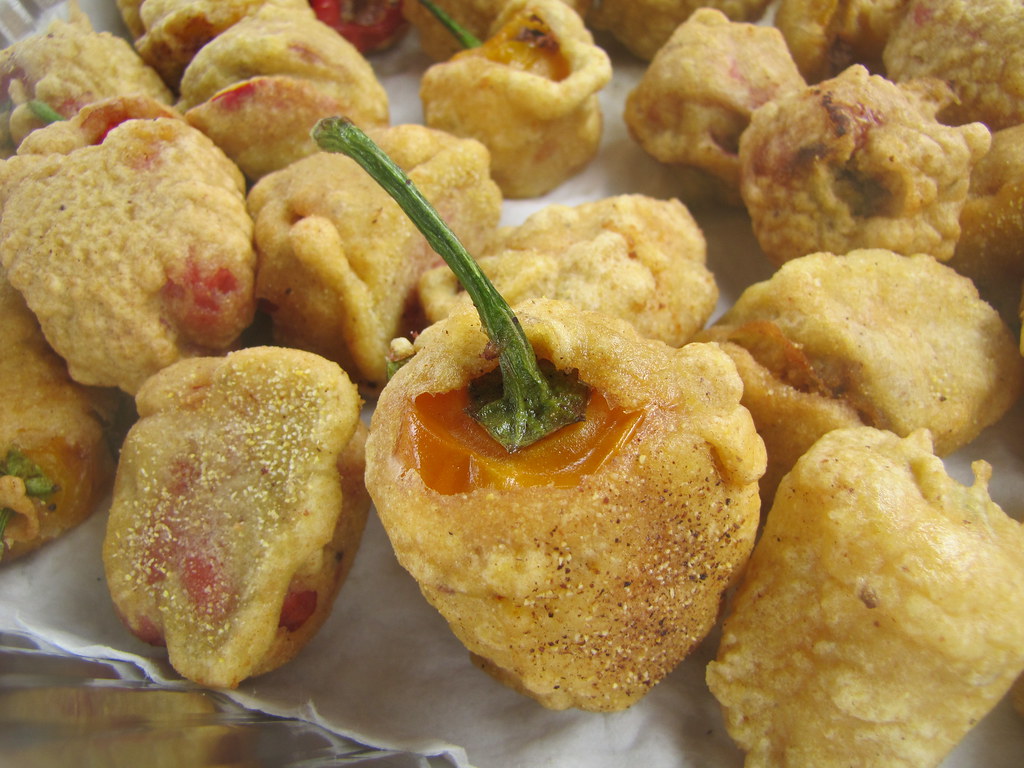 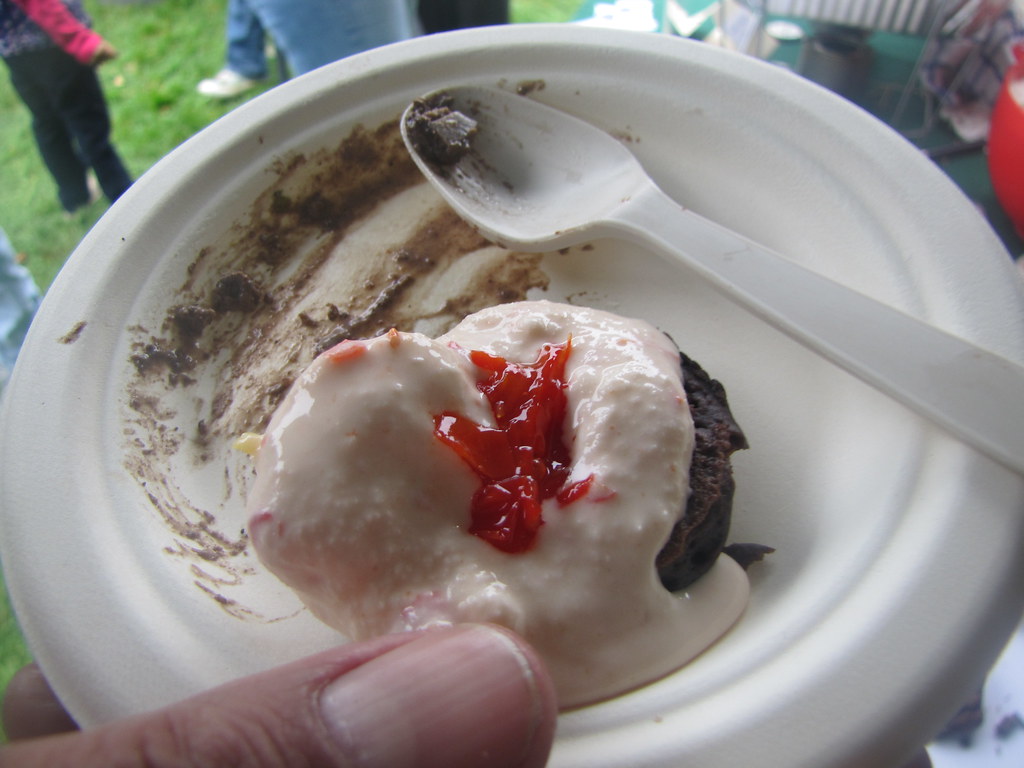 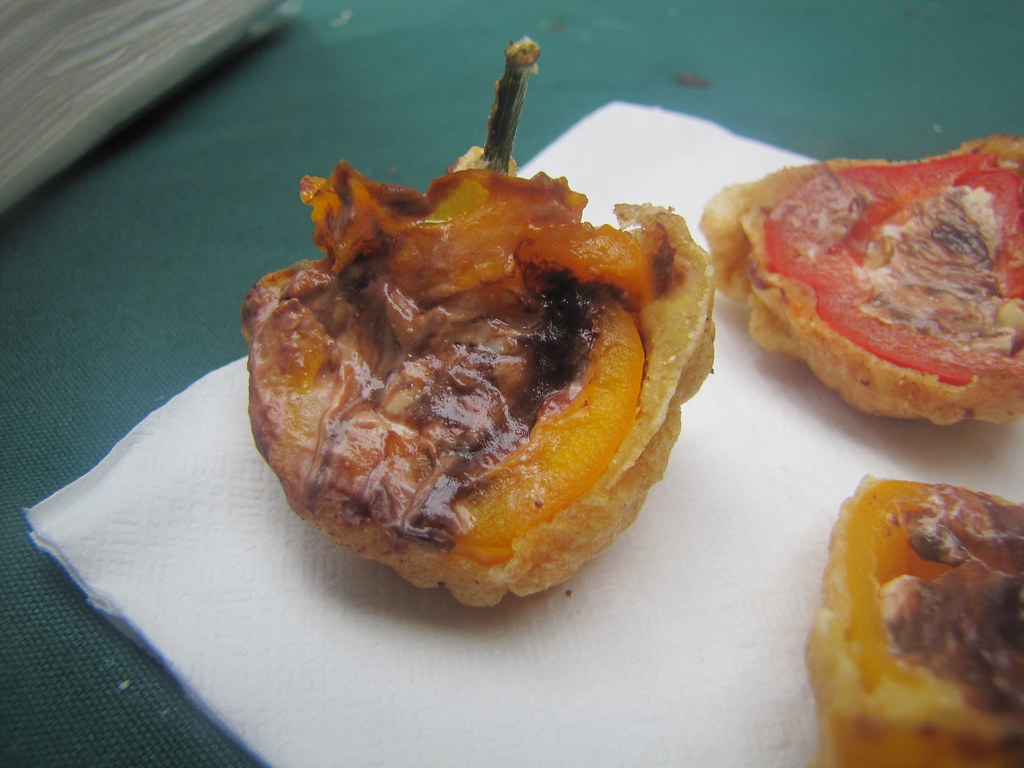 Nobody went for the obvious, which I would guess to be a classic mole dish, or else chocolate-covered hot peppers. Nobody made the same thing. Everyone had a good time, and there was a huge line in front of this table at the festival, making it one of the most popular events. Once three hundred people had cast their ballots for their favorite chocolate and chile dish, the winners of the day were Katie Feola and Anne Garrett, for their sweet and spicy bread pudding (which I failed to snag a photo of!). Actually, bread pudding doesn’t sound like such a bad dish to base an entire cook-off around. Anyone hear me out?

In any case, Katie and Anne can rest assured that they not only talk the talk, but can walk the walk when it comes to making really good food. It’s a wholly difference experience than dining out — lining up to eat at a cook-off; and it’s different to cook for, too. You’ve got to transport your dish du jour from the comfort of your kitchen, step outside your element, and deal with minor logistic challenges that the restaurant chef who serves straight from the kitchen to its diner in the next room doesn’t have. But when the payoff of your efforts is winning first place based on three hundred strangers who sampled your fare, the competitive streak of the home cook will be sated. And that’s something pretty unique from eating out.