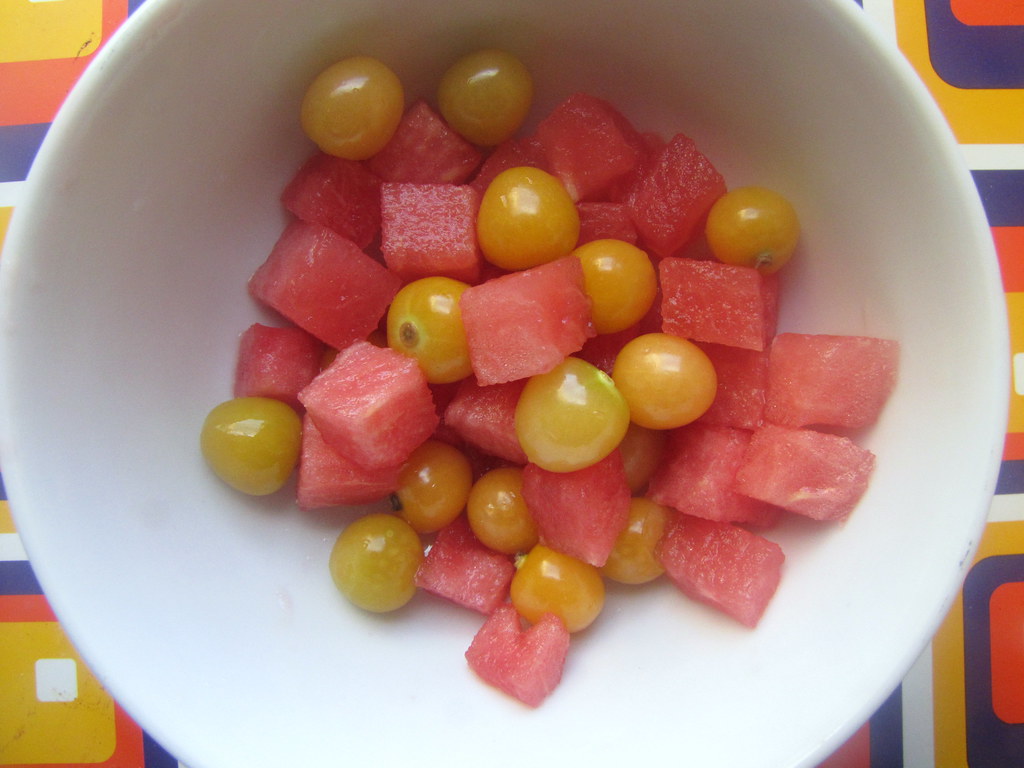 They don’t grow in the ground, like potatoes, and they’re not stone fruit, like cherries, so why the deceptive name? They also share more semblance in taste to citrus rather than cherry or grape tomatoes, whose appearance they’re strikingly similar to, at least once their tomatillo-like husks are stripped. Which might leave one to throw their hands up and exclaim, what is this fruit/vegetable/freaky plant? At least it doesn’t have a stray animal in its name, gooseberry.


Called ground cherries, these bite-sized juicy bursts are such a novelty to me that I am still in awe. (So if my fascination bores you, ground cherry-poppin’ pros, I apologize.) I first tried one from the vine at Eagle Street Rooftop Farm sometime this summer. I’ve been spotting them at other specialty produce farms’ stands and hearing its name pop up increasingly since. For instance, this small pack was bought from the Lone Acre farm, an organic, one-man-operation in Riverhead, Long Island that sells in NYC on Sundays at the Park Slope Farmers’ Market. They may vary in shape, size and name (“husk cherry” is also common, and another one, or possibly a similar variety, is “cape gooseberry”), but one thing’s for sure, they’re perfectly delightful in every way. 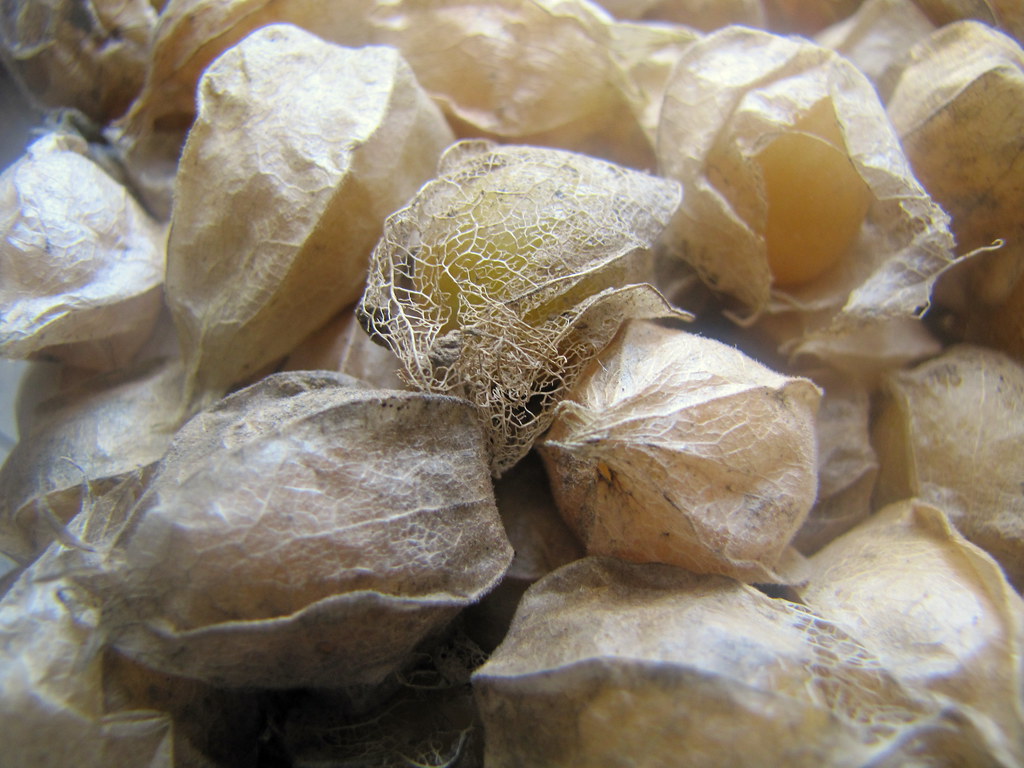 It begins with removing the berry, cherry, tomato, whatever you want to call it — fruit — out of a dull protective sack that can become as faint as dragonfly wings, or ancient lace, after drying in the sun for too long. Check out the one in the center of this photo above. The husk naturally splits at the base into a star-like formation, and if you hold the peeled pieces back, you’ll have what looks like a huge, bulbous stigma of a papery-petaled flower. 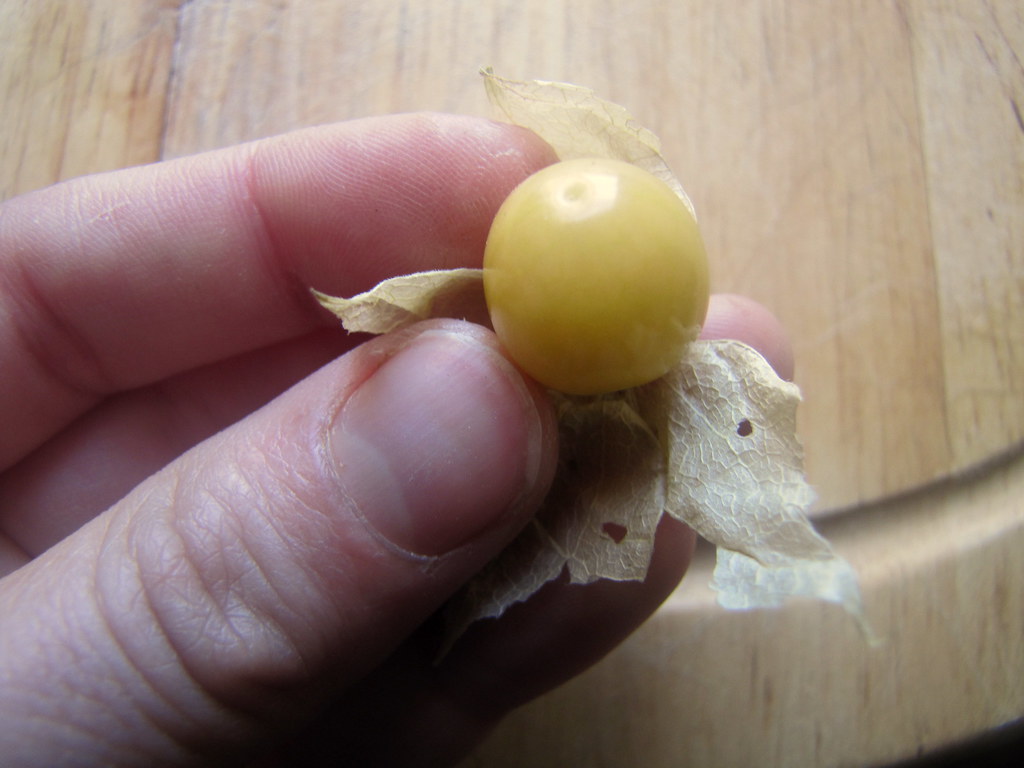 the husk is peeled back 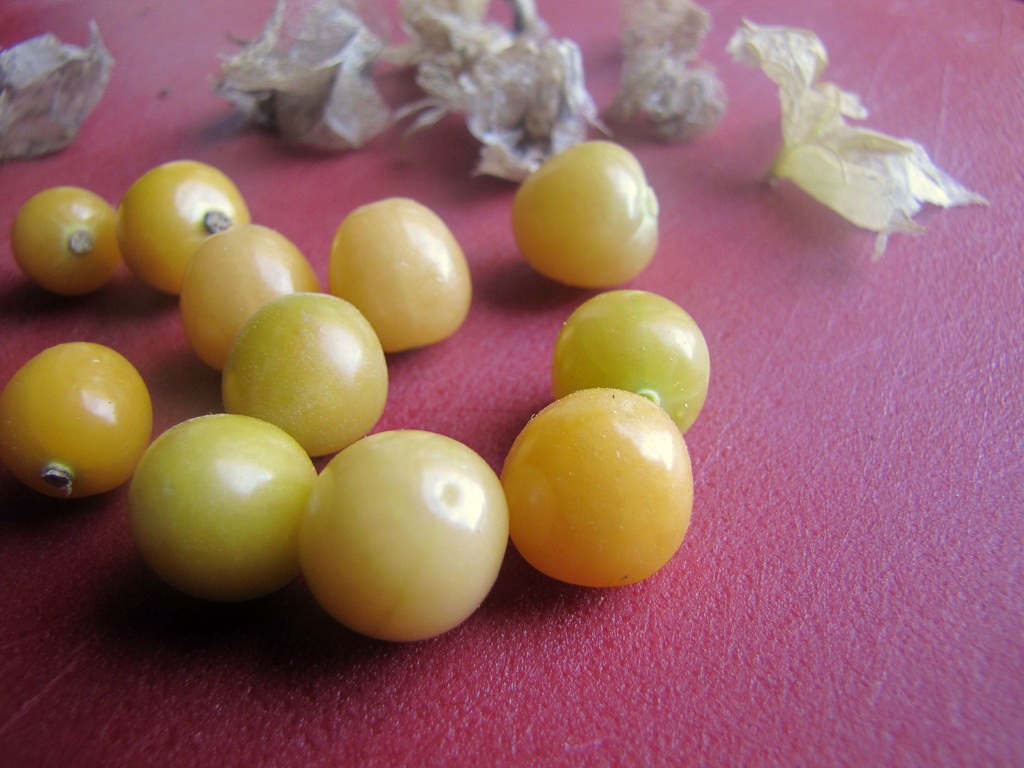 Once you “pop the cherry” (sorry, couldn’t resist that one), from the stem they’re ready to eat any whichway. Beyond the shiny, yellow-orange skin is mostly seeds, viscous bobules of ’em. You can chew, but probably won’t need to engage the molars for these. Fresh, some say ground cherries taste like pineapple, but I think mine tend toward lemon-lime. They’re mild in acidity, however, and sweeter than tomatoes but not quite on par with berries in natural sugars. Actually, they’re a little like ripe melon, which is why I tried cutting up chunks of a watermelon to eat with some of these. 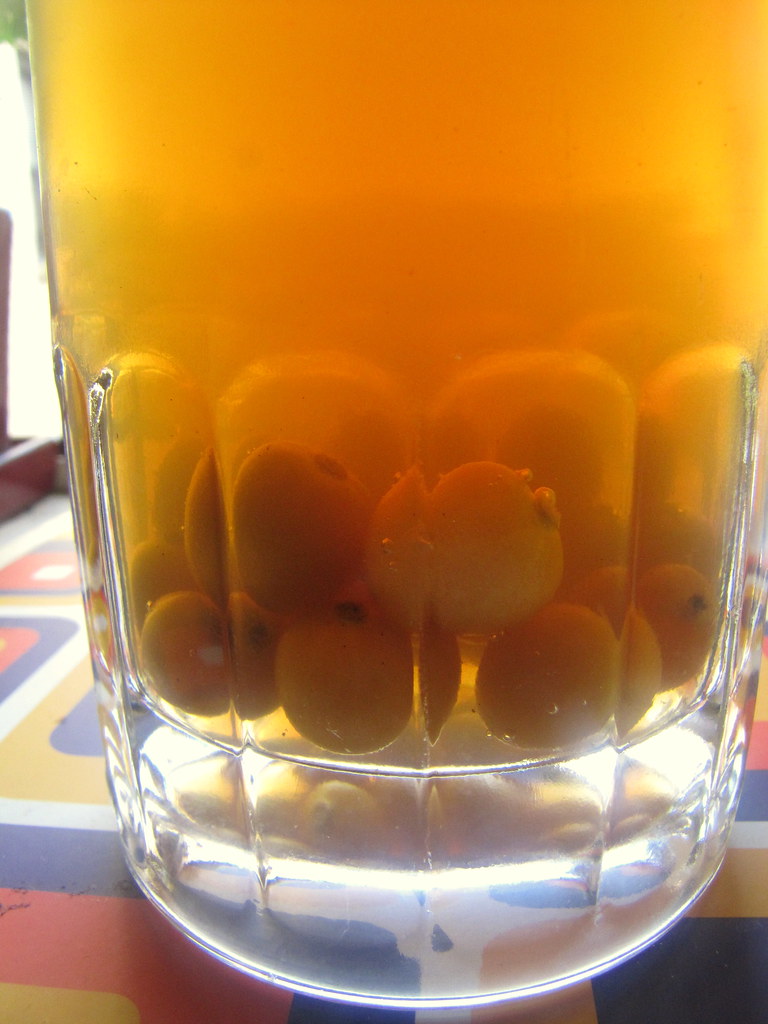 Other experimentations included submerging them in a “bubble tea.” Instead of tapioca pearls bouncing at the bottom, I thought the ground cherries to be fitting in size for this Taiwanese sweetened tea drink, and the burst of lemony sweetness a refreshing twist. It was interesting, with regard to the original, but I was somewhat nonplussed in the end. Then again, I don’t have any of those big, wide straws and couldn’t find a good substitute.

I also dressed them with heirloom grape tomatoes, and some sprigs of herb fennel, also acquired from Lone Acre farm. If you eat this combo while keeping your eyes closed, you can really tell which bite is which between the two fruits. Ground cherries could cook up to a great jam, jelly or compote, especially if they’re going mushy and you don’t mind the peeling — but that task would be twofold if you want to lose the skins as well as the husks.

Ultimately, I decided, ground cherries pretty good eaten just straight. A great to-go treat, since they come individually wrapped naturally, I brought the remainder of the carton with me on a road trip, and popped them all the way. Watermelon has no such convenience factor.

Combine the fruit and toss with the lemon juice. Top with chiffonnades of the optional herbs to garnish.

Four brownie points: As a summery dessert with virtually no fat or anything that isn’t a plant is a healthy one in any combination. Between the watermelon and ground cherries in this one there’s Vitamin C, Vitamin A, lycopene (if you have pink watermelon), and a modest calorie count for its satisfying sweetness.

Eight brownie points: Nothing much to see here, literally. This is hardly a recipe, as you’ve gathered, but for what it’s worth it’s a local and seasonal one, with ingredients from two farms/farmers I really admire, my CSA’s Sang Lee Farms and the Lone Acre.