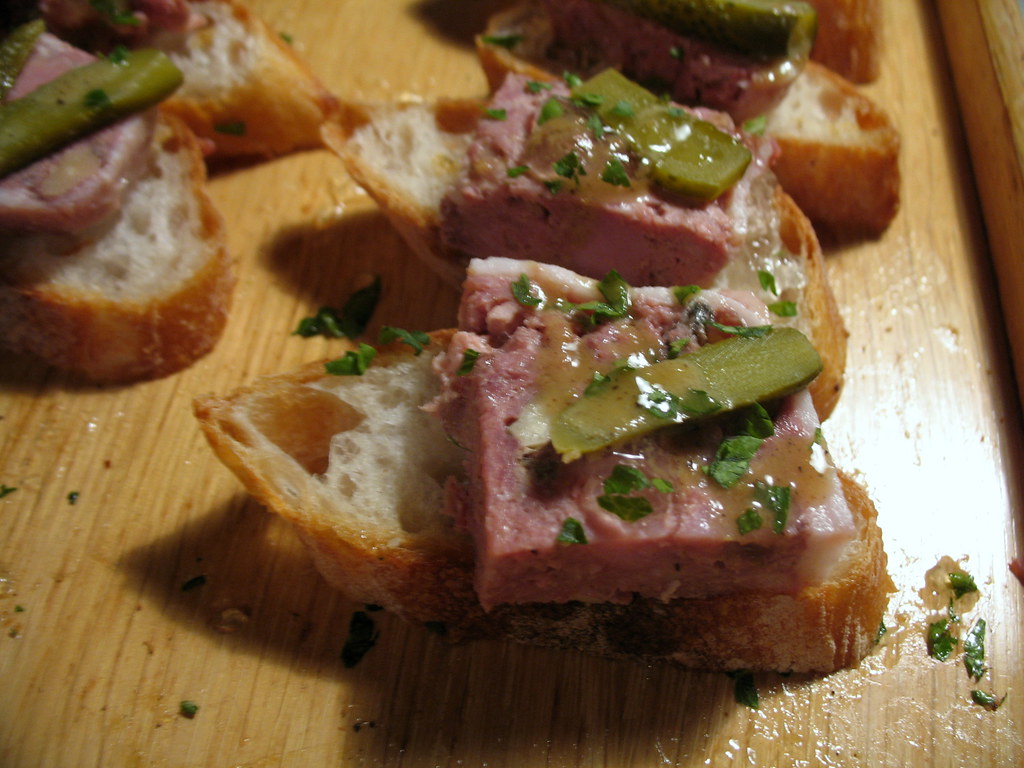 So, there’s a swine flu, you say? Sure. I saw it all at Loki Lounge yesterday, in the form of sixteen tasty samples, and a throng of hungry carnivores. The Park Slope Pork-Off, it was called! And many familiar faces cooked up their best for this one-off event, a fundraiser for the charity Kamay at Puso.

Meaning “Hand and Heart,” Kamay at Puso is a nonprofit that benefits victims of toxic waste in Mapdapdap, Philippines. And as trite as it sounds, the amateur chefs in the competition really cooked with their heart (and hands). I’ve said it before and I’ll say it again, but there’s something about swine that ignites sheer cookery bliss in so many lately. Hostess Laurel Fantauzzo figured that since lechon was all the rage with foodies (as well as pork in general), she’d chosen the meat as the broad theme ingredient for contestants to come up with their creations based on (all planned out, that is, before news broke of the other swine flu). 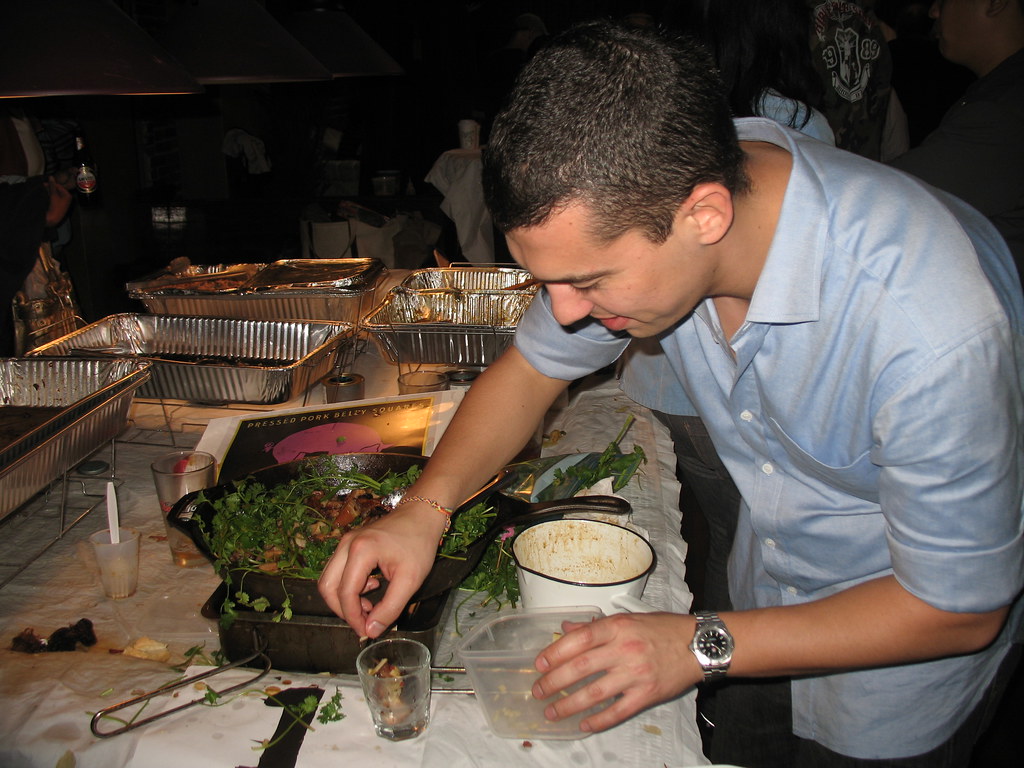 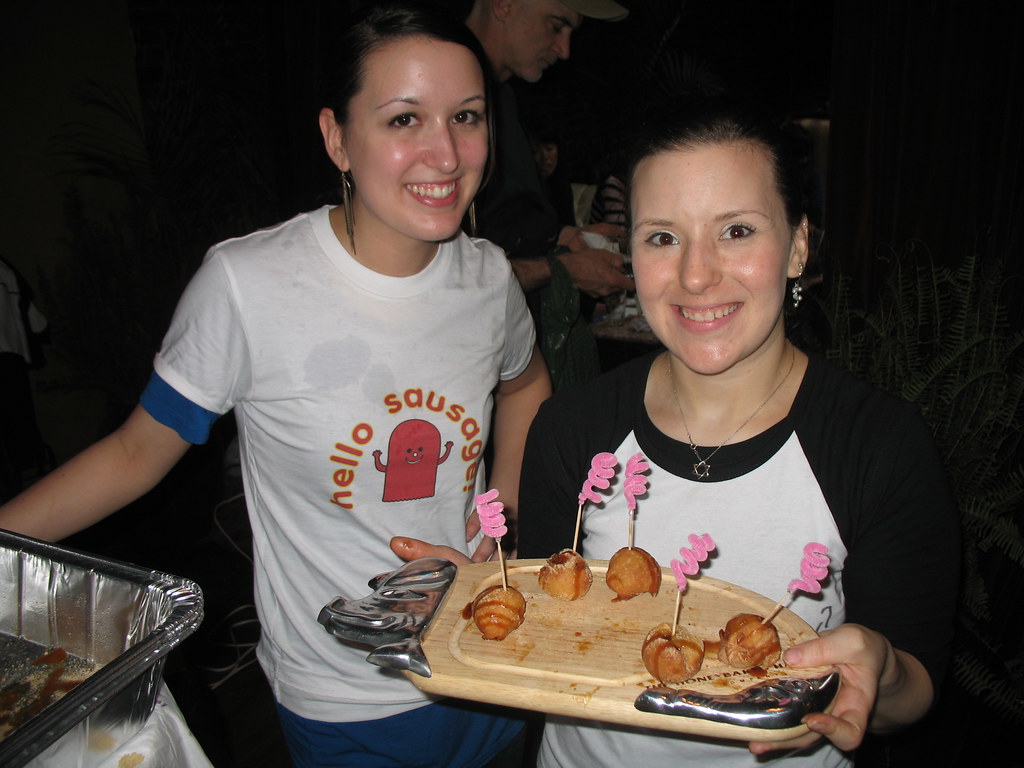 Stephanie and Frann with their delectable sausage-stuffed brioche donuts 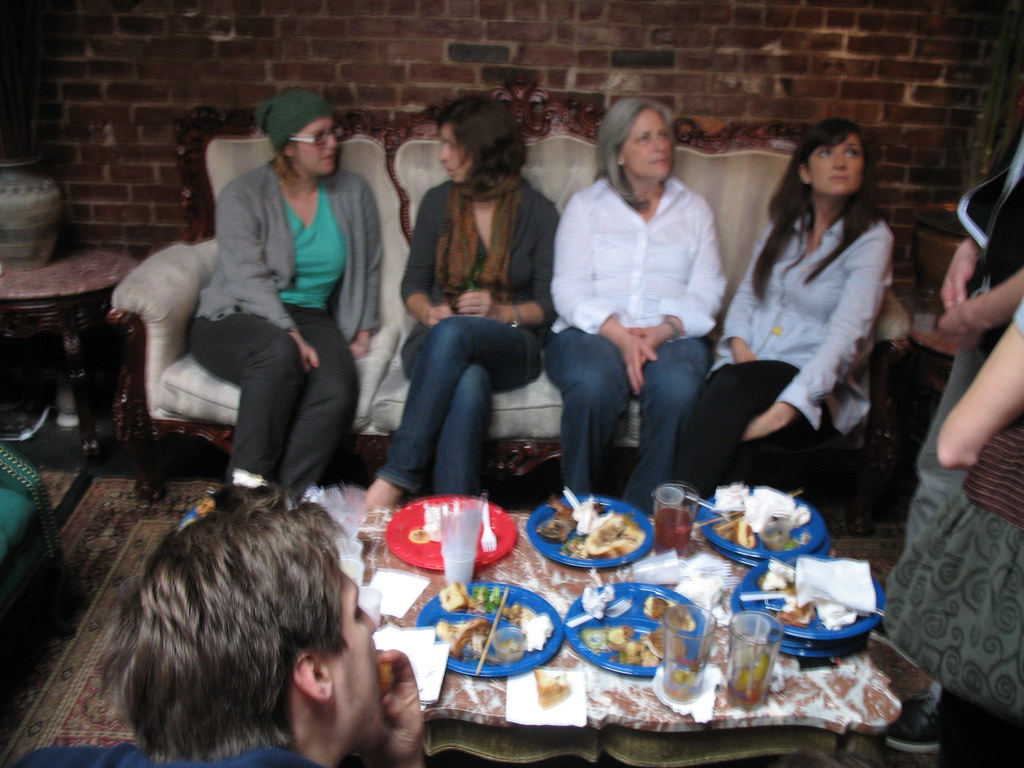 well-fed guests take a break in the back room


Not surprisingly, there was a wide array of flavors and applications splayed about the roomy bar —  on the covered pool table, in the dartboard playing area, and throughout the lounge. As at the recent Bacon Takedown, many contestants opted to make desserts. (I know — a Pork-Off? Time to sate the sweet tooth!) But alas, lightning was not to strike twice for the pork dessert-making contingent. Two contestants churned out ice cream this time — one as a topping for bacon pecan tarts, along with huckleberry sauce — but neither one placed, as at the Bacon Takedown. In this audience-judged event, savory hit the spot. 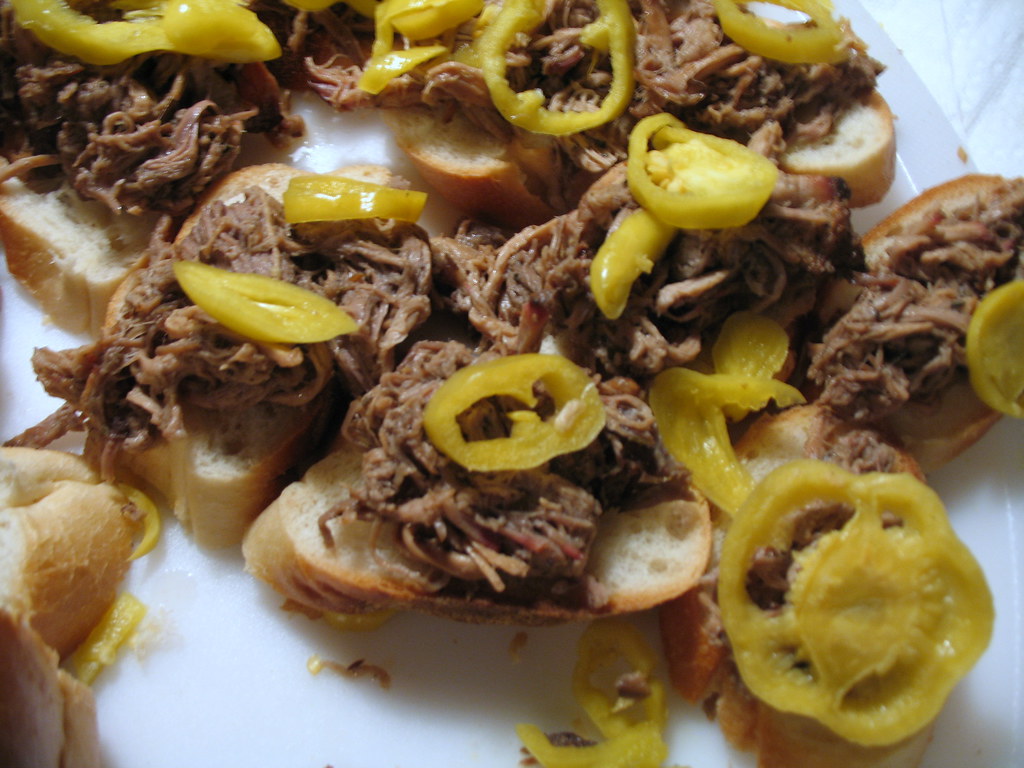 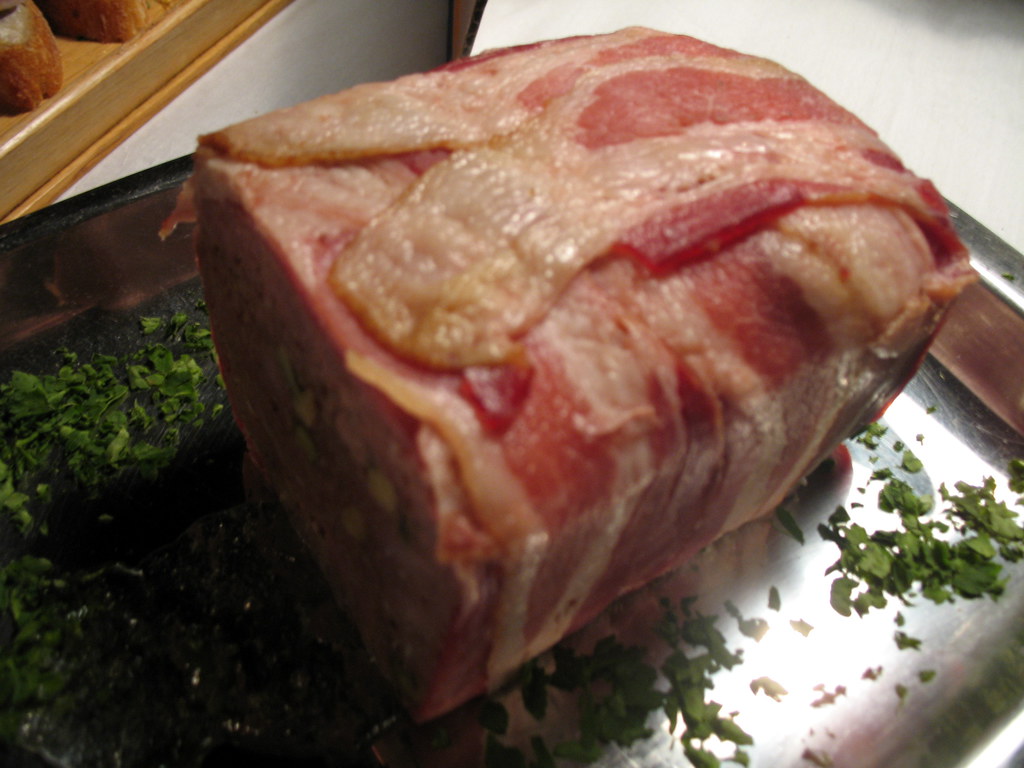 In third place, a team led by Sonny Sarker impressed all with their comforting, down-home pulled pork toasts topped with homemade jalapeno pickles. (Similar in concept to Melissa‘s mole pulled pork topped with sausages and homemade pickles.) In a dramatic tie, frequent cook-off rivals Theo Peck and Nick Suarez placed second. Instead of pulling pork apart, Theo pressed the meat into a rich block of pate, studded with walnuts, and wrapped with ribbons of bacon. He placed each slab on French bread and topped it with a dollop of sweet sauterne jelly which ultimately won my vote for top honors. I was almost swayed, however, by Nick’s hearty braise of ham hocks and falling-apart shoulder with collards and other veggies. (He claimed to be taking a risk by including vegetables in his Pork-Off entry.) 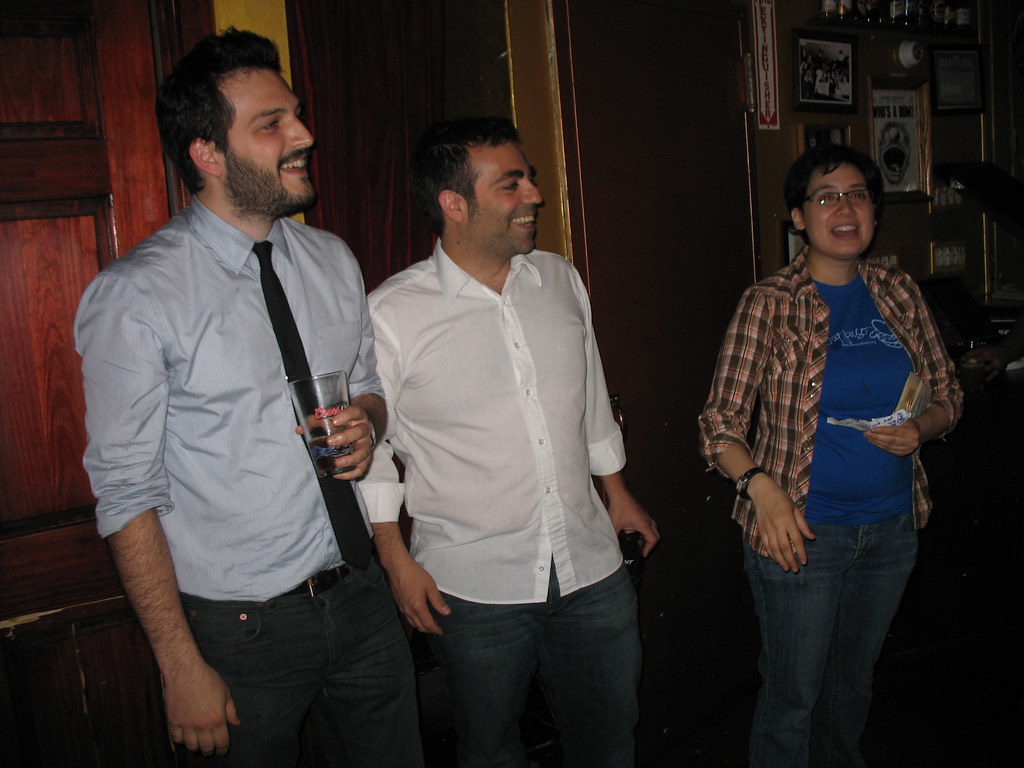 My vote also nearly went to the team with the perfectly puffed, caramel-drizzled brioche donut holes that were stuffed with savory pork sausage — a completely unexpected and delicious combination. Another highlight that featured master pastry skills were contestant Amelia’s sausage-studded pizza squares, a recipe of her mom’s. Best presentation kudos would go to Oliver’s satay pork loin skewers with Thai coconut sauce, placed atop a bed of noodles on a crisp home-fried rice cracker; also, to Jonathan’s cast-iron saute of home-cured pork belly with fresh cilantro. 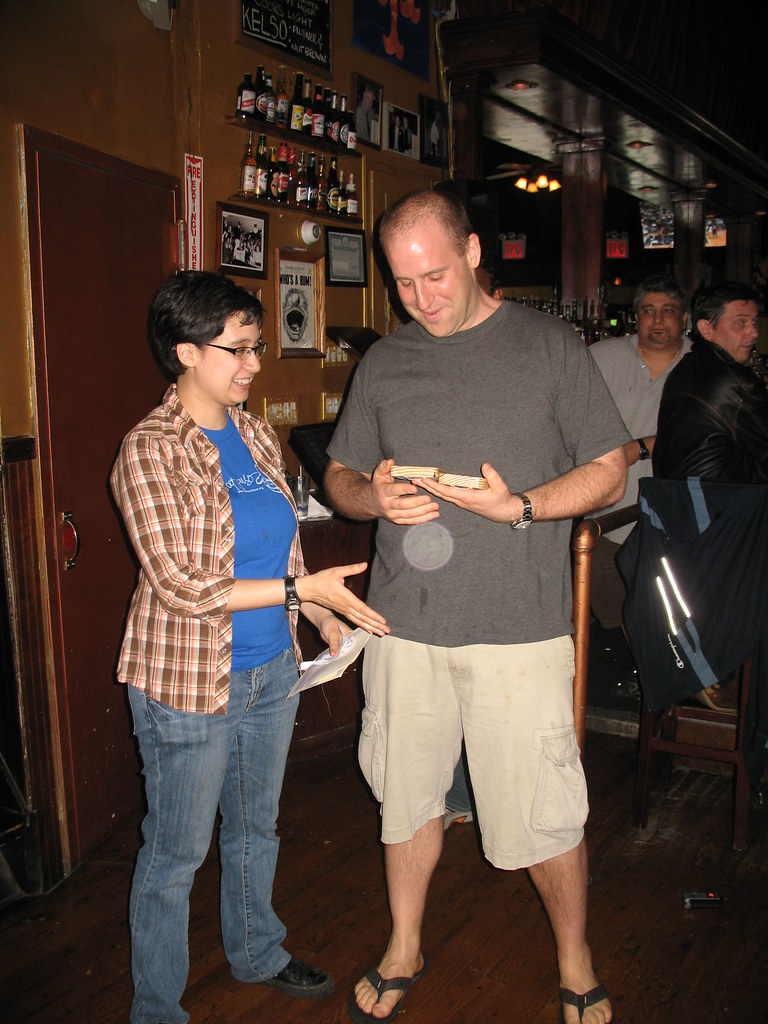 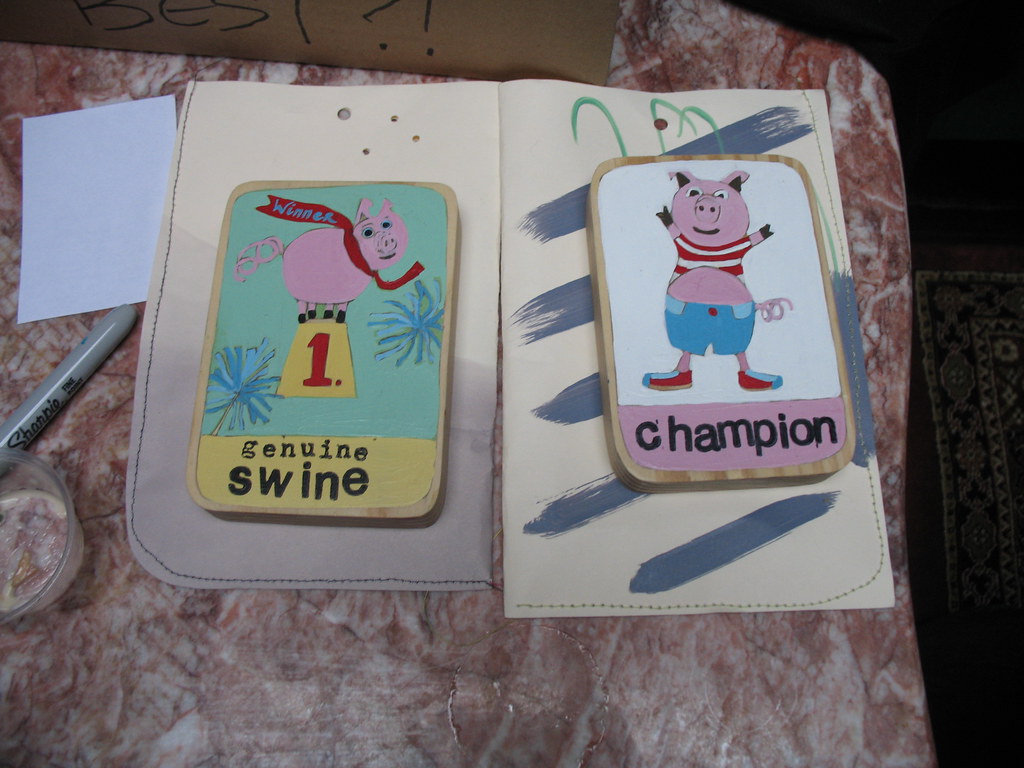 But none of the above would make it to first place. Instead, that honor was awarded to first-time cook-off contestant Jesse Forster, for his “Divine Swine” barbecued pork belly. Something divine must have been in the air, too, because moments after accepting his award, pumping fists, posing for cameras, and gleefully thanking his fellow contestants and the hostess, Laurel made an announcement: “The winner has just decided to donate his prize to the charity.” So Kamay at Puso received not only all the donations from the $10 entrance at the door (which was sold out, after some 175 people paid their way), but the $100 prize that would have gone to Jesse. Many congratulations to Laurel and all the contestants for helping raise so much for those in need — and having a helluva fun, tasty time at it.

And believe it or not, I didn’t get to taste the winning dish! I’d gotten there just too late. Fortunately, I was able to bug Jesse (a truly kind-hearted seeming guy) for his secret recipe. So here it is, the #1 pork recipe of Park Slope.

To make the sauce, prepare a base of equal parts unseasoned canned tomato sauce, cider vinegar and honey. Mix well and add salt to taste. Add an ungodly amount of freshly crushed garlic (no garlic powder allowed). When you think you’ve added enough, add some more. Finish with a few teaspoons of Goya canned chipotles and a little more garlic.

Find the fattiest piece of pork belly that you can get your hands on, preferably skin-on. Score the skin in a crisscross pattern and massage the belly liberally with sauce, using your hands to really get the love in there. Marinate 12-24 hours in a deep baking dish in the fridge, re-applying and turning once if time allows.

Place the belly skin/fat side up and roast at 200 degrees until tender (2-4 hours, depending on the size). Re-marinate using a brush and transfer to a charcoal grill over indirect heat for another 2-5 hours until the belly starts to fall apart when picked up. Marinate, turn, and flip frequently to avoid charring (the honey in the sauce burns easily).

Transfer to a serving plate, douse with a little more sauce, open a cold one  and enjoy!