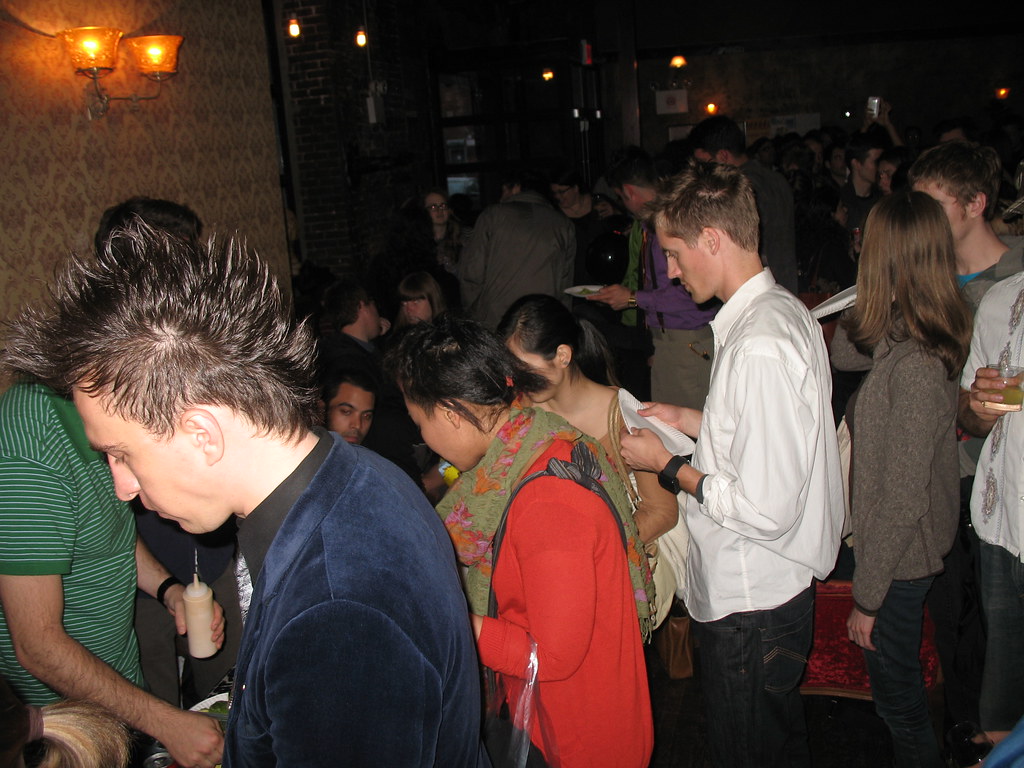 Yesterday I certainly got my greens judging the 2009 Guactacular Invitational, though they were none the unsaturated fatty type. I can’t say how much I ate of the goopy goodness, but in attendance, more than 300 made it to the Bell House in Gowanus for the first-ever cook-off event.

That, and I probably had more than my share of Tecate and Modelo Especial, a $2 special of the Cinco de Mayo-dated fete. I’m still feeling the repercussions. (And trust me, looking forward to the relative healthfulness of the Tofu Takedown this Sunday.) In any case, the event was hosted by the fine folks at Nachos NY, the site dedicated to the ebonic assertion of disownership and foodstuff otherwise known as tortilla chips. Commander-in-Chiefs Lee Frank and Rachel Anderson tapped New York City restaurants and home chefs alike to summon their ablest Aztec artistry. The result: ten contestants or teams of cooks, several gallons of free guac, and a line that wound around the once-spacious venue. 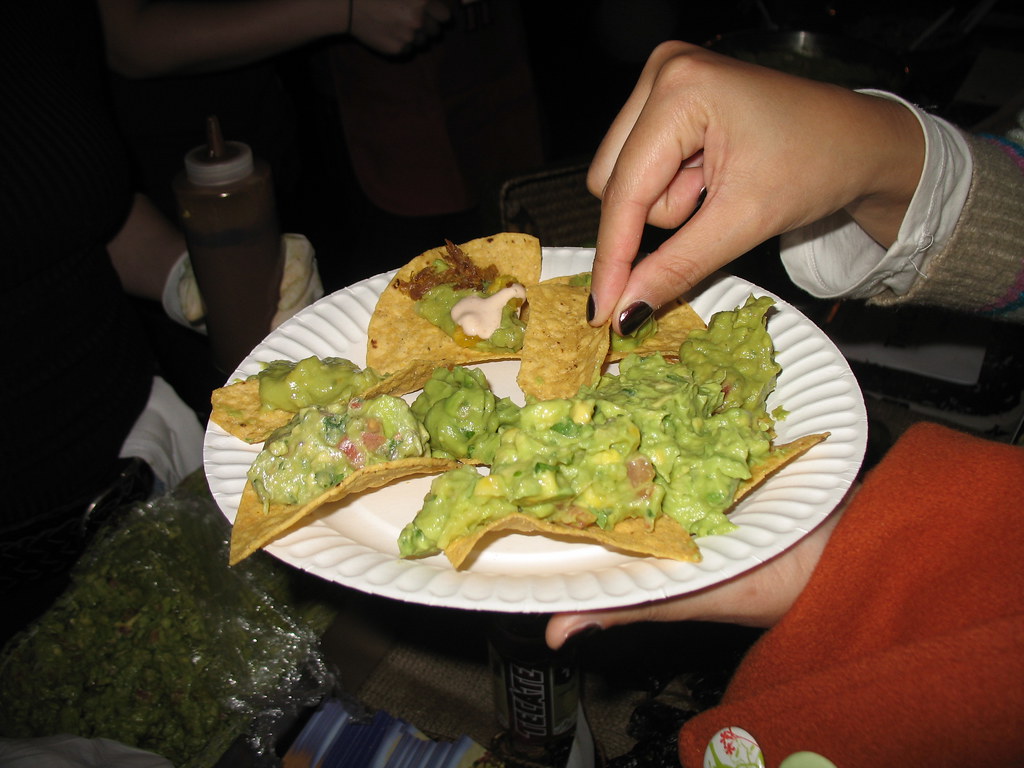 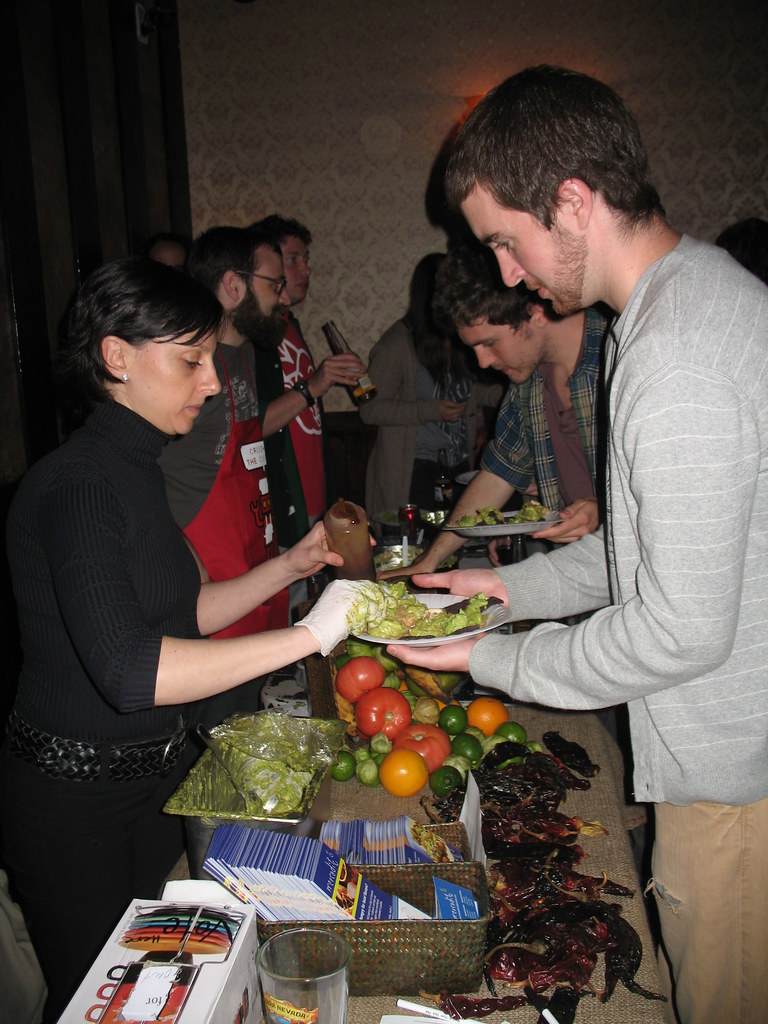 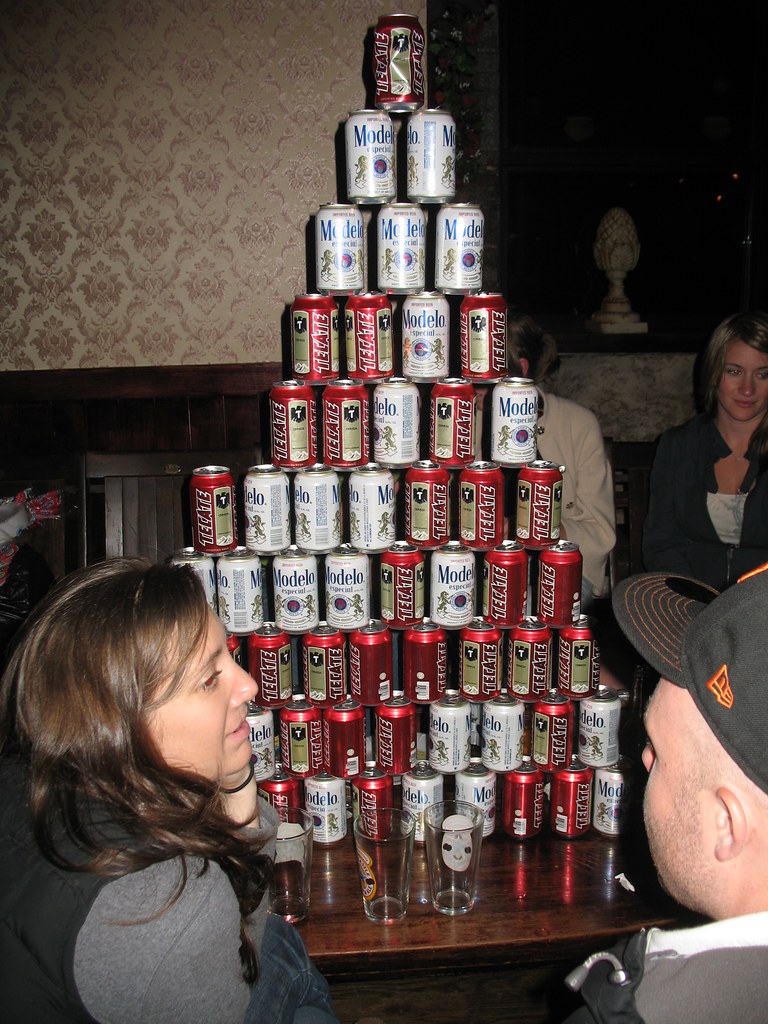 I had plenty of fun sneaking past that line with my judging privileges, along with fellow judge Matt Timms, to taste my way through the Nickelodeon slime-like substances. All in all, this was a tasty and unique event — who doesn’t love guac? I remember the days when I couldn’t care much for it, as a pre-teen, but that all changed within an hour’s worth of feasting at a Fourth of July in the early nineties. Oh, innocence lost!

Major kudos to each of the contestants for sating that tastebud. “Average folk” contestant DJ O’Connor revealed that he went through more than thirty avocados for the festivities, which he doused with mango juice as his je ne sais quois factor. All in all, the guacs in competition seemed to learn far more in favor of sweet rather than salty with special add-ins. The team from Pinche Taqueria studded theirs with fresh pineapple and sweet corn; Mercadito restaurant topped theirs with a chocolately mole sauce; Karol Lu opted for the unusual addition of pomegranate seeds in hers. Then there was Nick Suarez. Never failing to disappointment on the presentation factor, Nick topped each dollop of guac with shredded roast pork, diced pineapple and a chipotle crema with painstaking care for every one of the hungry line-waiters. Incidentally, Nick admitted he’d included the shredded pork that was leftover from his second-place winning Pork-Off dish on Sunday. 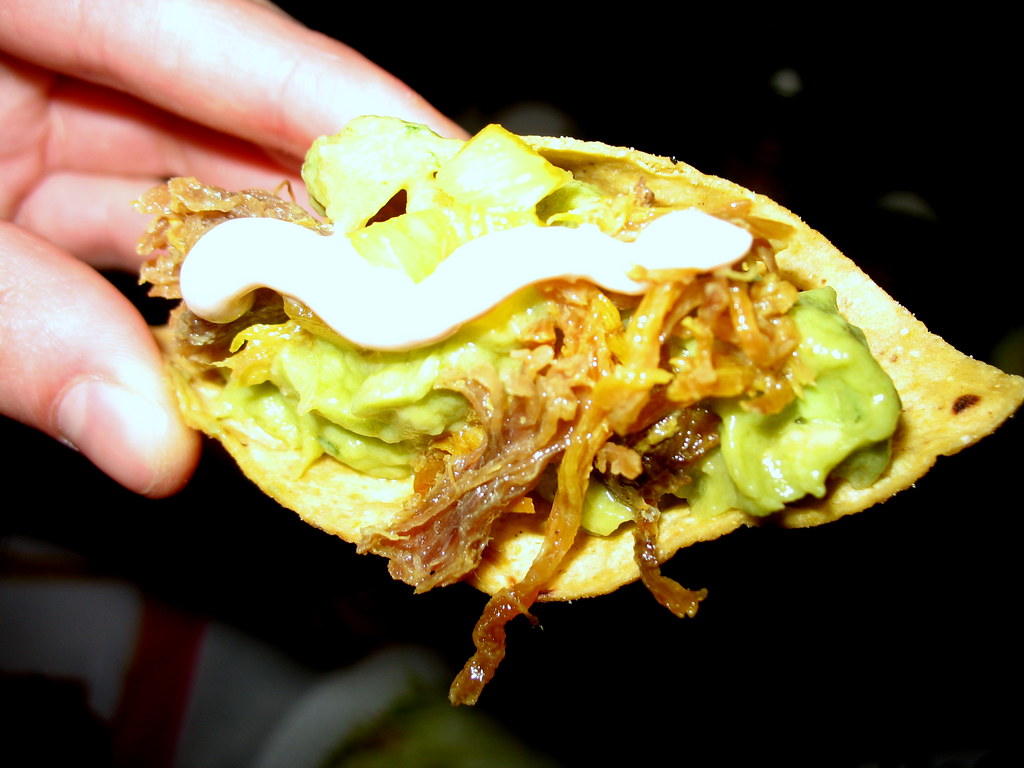 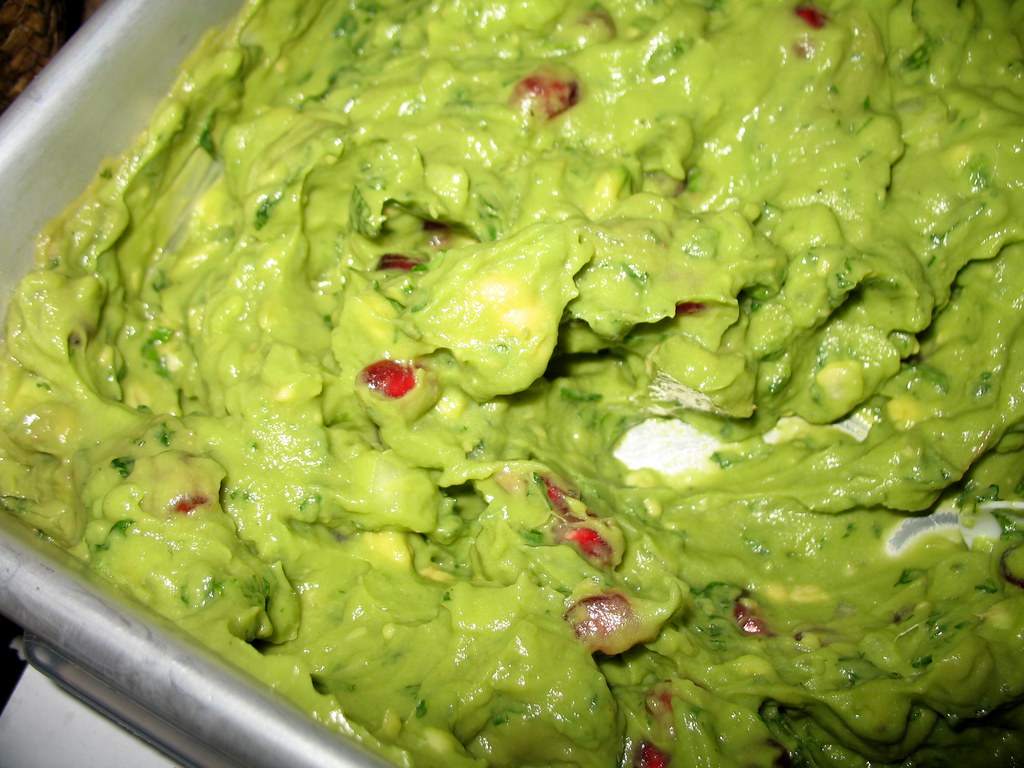 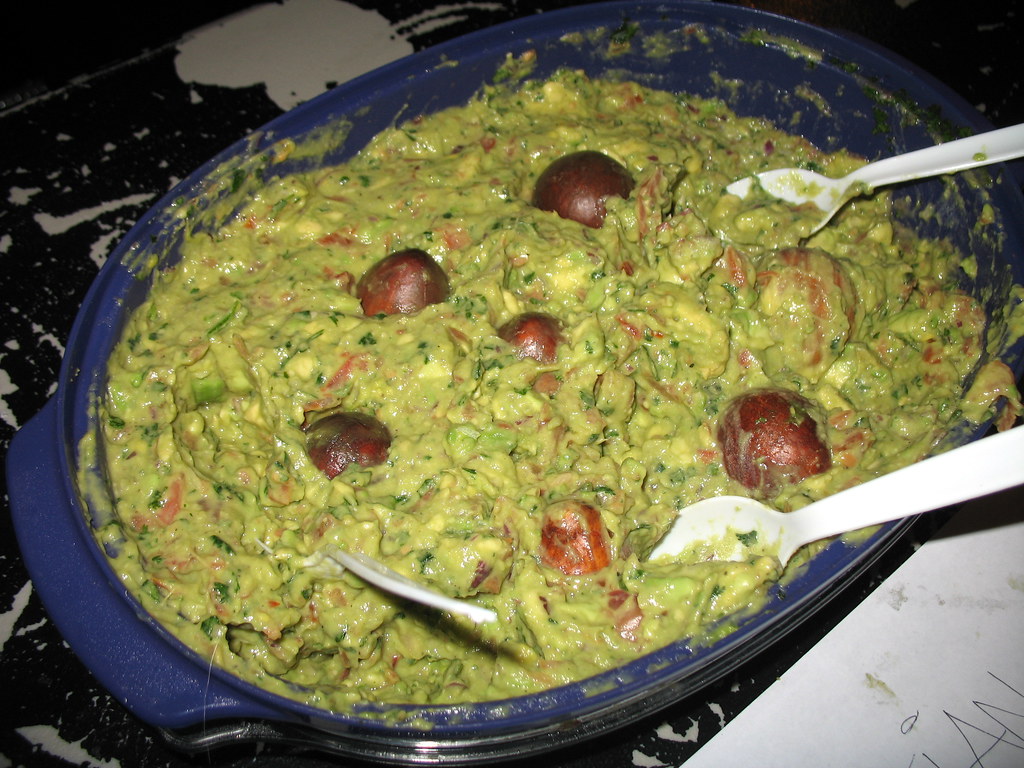 I only wished that Nick’s guacamole itself was as well-balanced as the two I ultimately chose as my favorites. I strongly believe in even the simplest of cook-off entries having a one-of-a-kind draw dreamed up by its chef alone. Which is why I chose Karol’s as my top guac: not only was her guac smooth and creamy and well-balanced in terms of acidity, salt and spice, but those pomegranate seeds were really something special, I thought. Informed that I’d need to pick a favorite in the restaurant competitor category, I chose the guacamole made by La Barra restaurant in the Soho, once again for its silky-smoothness and expert balance of flavors.

But I was not alone in judging; as mentioned, Matt Timms added his two cents to the judging pool, along with Rachel Anderson from Nachos NY (A fourth absentee judge offered his insight but the fifth judge, one of my favorite bloggers ever, Lisa Fain, was nowhere to be found during the judging process! Hope you survived the slime!) When our votes were put together, the 1st place award in the restaurant category went to #5, Pinche Taqueria, for their fresh pineapply and corn-studded guac. Many congratulations to them. And by a two-to-one vote (the sole vote going to Nick Suarez), first place in the home cook category went to guac #8, Karol Lu’s. 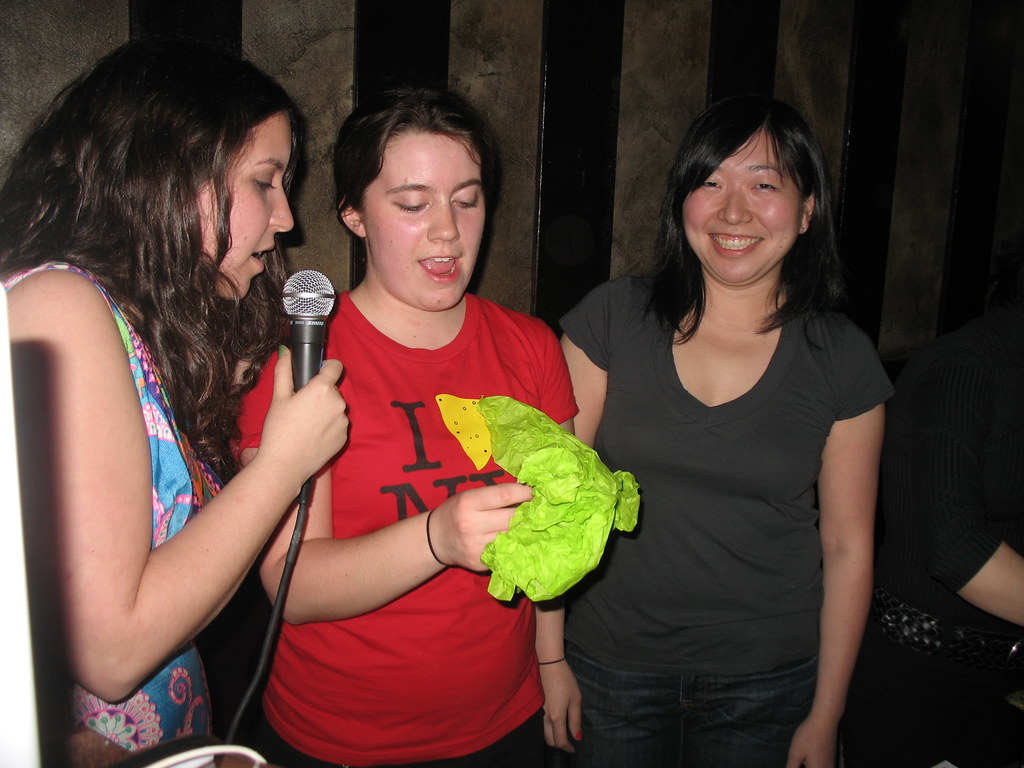 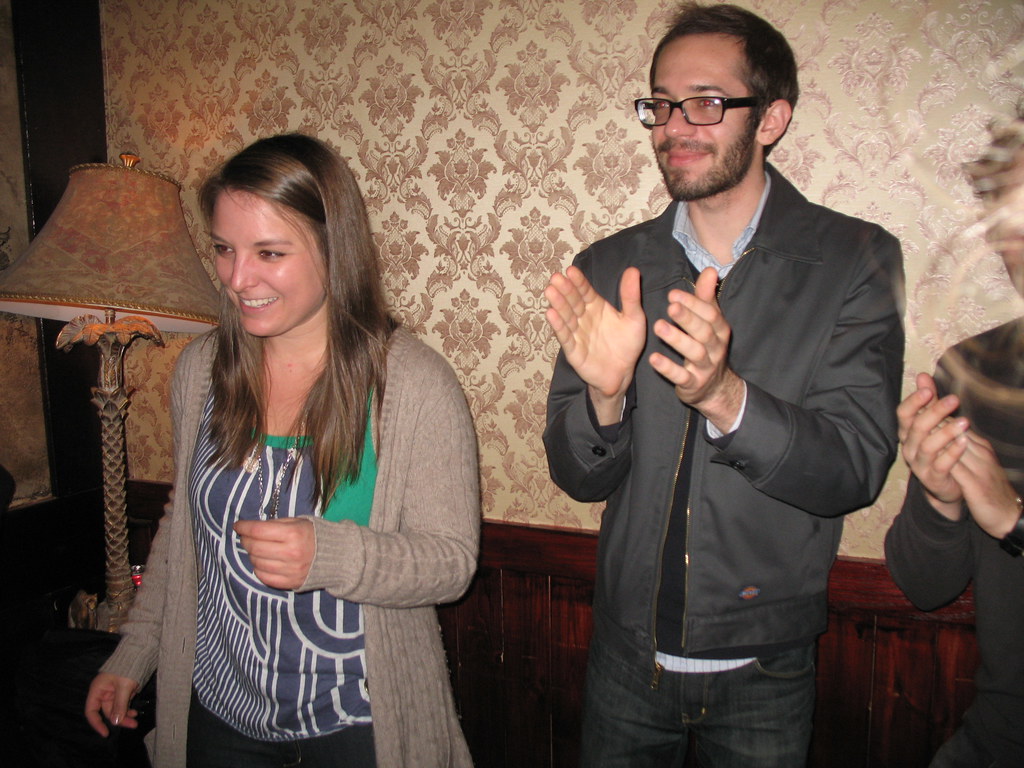 
Mind you, this has nothing to do with the fact that Karol happens to be my close friend! I’d swear it on my mother’s life but it’s close to Mother’s Day. It did, however, make it very easy for me to obtain her winning recipe, for which she won a pair of avocado-shaped earthenware salt and pepper shakers (hey, it was a free event, after all).

But before we get to that, there was one more award to be dished out that night — the people’s choice award. Even as the crowds continued to consume the avocado goodness, more than two hundred or so had cast their own votes. That victory was claimed by an as-of-yet overlooked entry by Morgan Jarret, a “no-nonsense,” good, old-fashioned guacamole, the kind you’d want to eat for hours at your next Fourth of July party — or whenever. 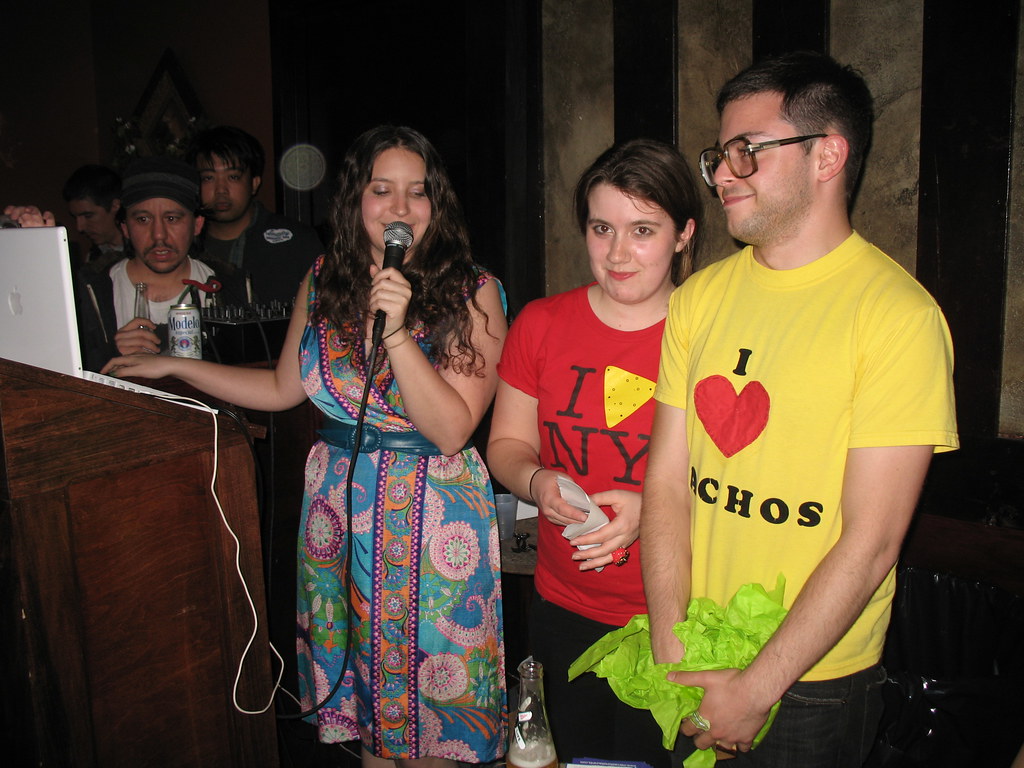 Morgan received another set of avovado salt and pepper shakers for the effort, not that either winner needed to be reminded to use them with their skills. I’m told a trivia night closed the night in the main stage area of the bar, which I was far too dazed and confused by all the crowds to keep focused on. I don’t believe it had anything to do with guacamole, food, or anything else that was going on in the other room. But as long as we’re on the topic, does anyone know what the avocado was named after? I’ll give you a hint — it’s got something to do with its shape.