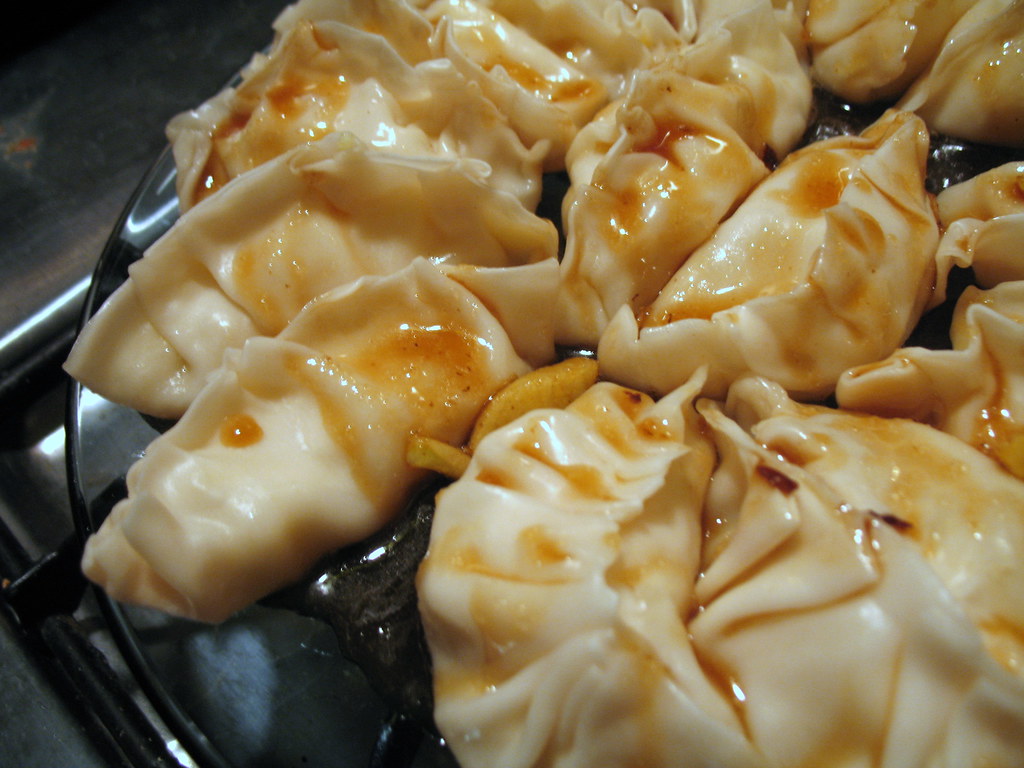 Happy Chinese New Year! Thanks to all the “students” who came to the Brooklyn Kitchen last night for me and Winnie’s dumpling class. I hope you mark a dumpling party on your calendars soon. That was some tight work all around with the homemade dough — this is tricky stuff to roll out and fold when making dumplings for the first time! Be sure to check out the Brooklyn Kitchen blog and Winnie’s blog soon for her braised oxtail filling; a basic pork and chive filling can be found here. And for a less traditional, completely un-Chinese dumpling recipe, keep reading… It’s been far too long since I’ve made dumplings, so before the class, I wanted to brush up on my pinching technique. I took the opportunity of a joint birthday party between three friends on Friday to make a few batches of a certain dessert dumpling. 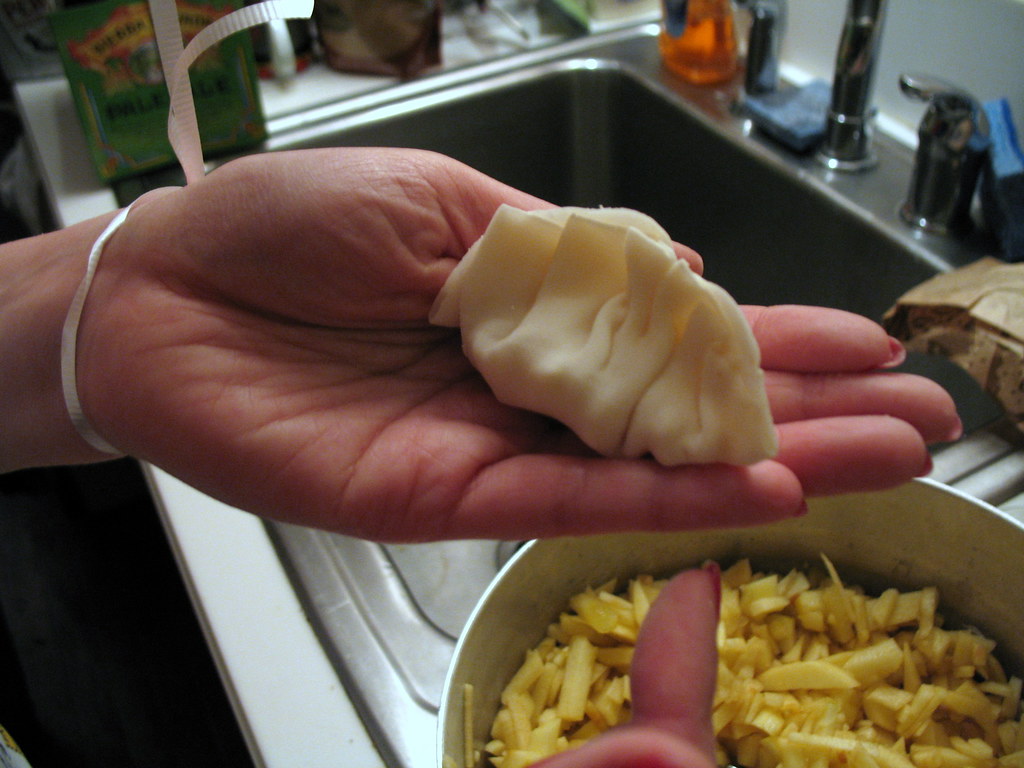 Now, I was not the inventor of the apple dumpling executed Chinese potsticker-style. Five or six years ago, in my brother’s old, old apartment in Inwood, he and his roommates threw a dumpling party. It was an epic night of sticky fingers. It was awesome. I haven’t forgotten it, nor have I forgotten the most interesting twist (food-wise, that is): informed that it was a make-your-own dumpling affair, one girl showed up with a bag of apples, a canister of cinnamon sugar and a jar of caramel sauce. We looked at her, totally confused. Did she get the right address?… Unfazed, she joined the kitchen full of other (meat and veggie) dumpling makers, and chopped her apples into very small pieces. I can’t remember if she added sugar to them, but this was stuffed into the plain old flour dumpling wrappers that were provided, folded just as the others were, and then browned and steamed in the same pans, just like the rest. Once they were out of the pan, she topped the apple dumplings with a dollop of caramel sauce and a sprinkle of cinnamon sugar. And they was fabulous.

I can no longer remember who might remember who this person was, the genius of the sweet Chinese potsticker, but I have her to thank for the version I came up with at Karol, Saha and DJ’s birthday party. Bringing just a few apples and a pack of premade dumpling wrappers, I stole some brown sugar from the pantry, grabbed a stick of butter from the fridge, and asked around for booze. The first bottle that was pushed toward me was rum. And that’s how these buttery, brown sugary, crispy-on-the-bottom, sticky-on-the-top, and warm and gooey as an apple pie-in-the-middle dumplings were born. 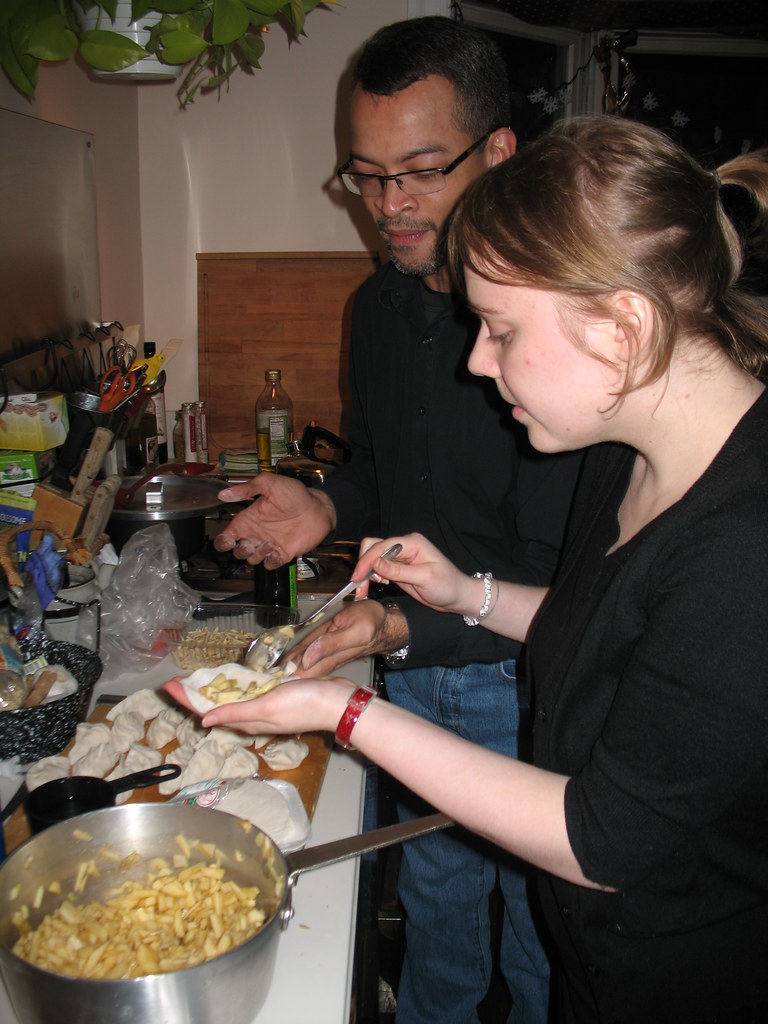 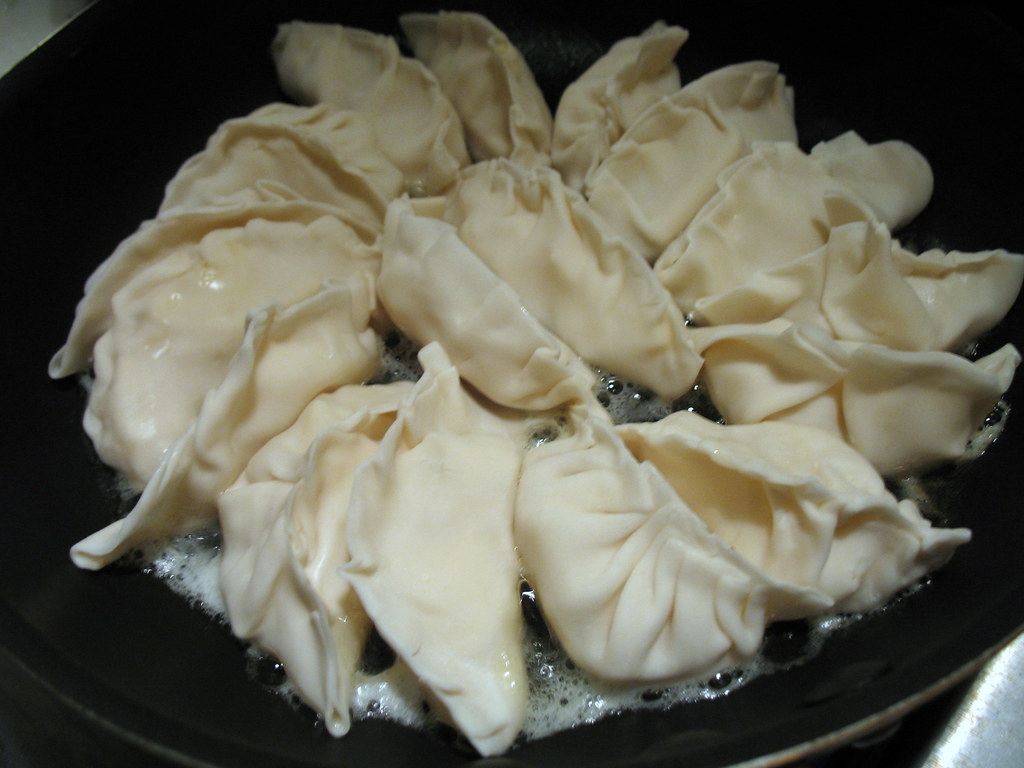 dumplings get sizzling in butter 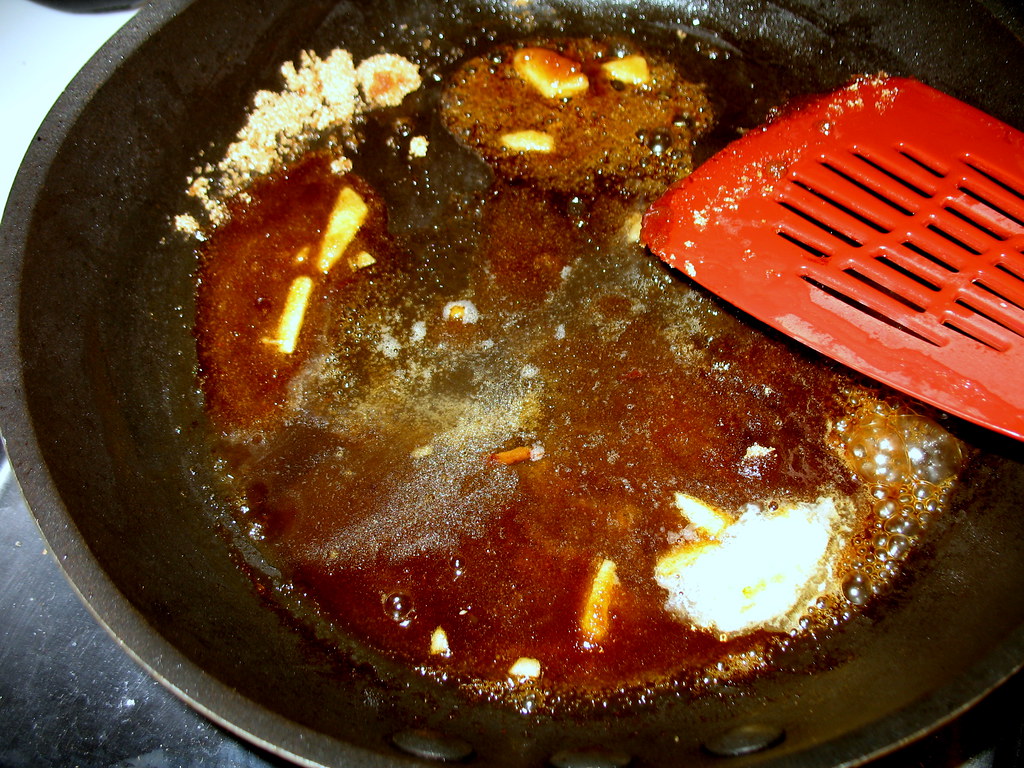 
In true dumpling party fashion, I merely showed one or two guests how to fold the wrapper closed, then left that station. The method was passed on by teachees turned teachers, and I went ahead cooking the dumplings in a pan, with butter this time, instead of oil. Once the were browned and turned onto a plate, I swirled some butter, brown sugar and a splash of rum in the same pan and stirred until a thick sauce was produced. This was drizzled on top of the plate of dumplings. The guests seemed to enjoy making dumplings, I hope, and everyone who got a taste seemed to like the result. I’ve been asked for the “recipe” by one of the birthday kids himself, so here you go, Saha. And have a happy, dumpling-filled New Year to all.

Combine the apples, 1/3 cup brown sugar, optional squeeze of lemon and optional cinnamon in a large bowl and stir. Place a spoonful of apple mixture in the center of a wrapper. Trace a line of water around the edge of the wrapper and crimp the edges shut (see this recipe for more on folding/pinching). You should end up with a crescent-shaped dumpling that stands upright, with the seal along the top.

Heat a tablespoon butter over medium-high in a large, nonstick pan. Working in three batches, arrange one-third dumplings around the edge of the pan in a tight circle; fill remaining space in the middle with more tightly packed dumplings. Cook for about 2-3 minutes, or until bottoms are lightly browned. Pour about 1 cup of water into the pan and cover immediately. Cook another 5-7 minutes or until water is cooked off and skins are translucent and cooked through (remove lid to cook off water quicker if you’ve added too much). Turn dumplings onto a serving platter.

Reduce heat to low, and add about a tablespoon each of the butter, sugar and rum. Stir quickly to dissolve sugar and just bring to a boil. Drizzle sauce on top of the plate of finished dumplings and serve. Repeat twice for two more batches.

Six brownie points: Unlike apple pie, apple crisp, apple turnovers, apple strudel, and most any cooked apple dessert in the world, this one has no rich pastry or crumbs to accompany it. Because the dumpling skins alone are completely fat-free (and flavorless), they’re cooked in butter here, and doused with a little more in the rum sauce. But in comparison, it’s a less fatty way to produce something that tastes (in the words of one eater), “like little apple pies.”

Three maple leaves: Once again, not looking good; the apples were purchased at the last moment, as I passed through Chinatown on my way to the party. There I picked up wrappers and other ingredients for Sunday’s “real” dumpling feast. No idea where these apples were shipped from, but it’s too bad, since apples are in season locally. Next time, the Greenmarket…