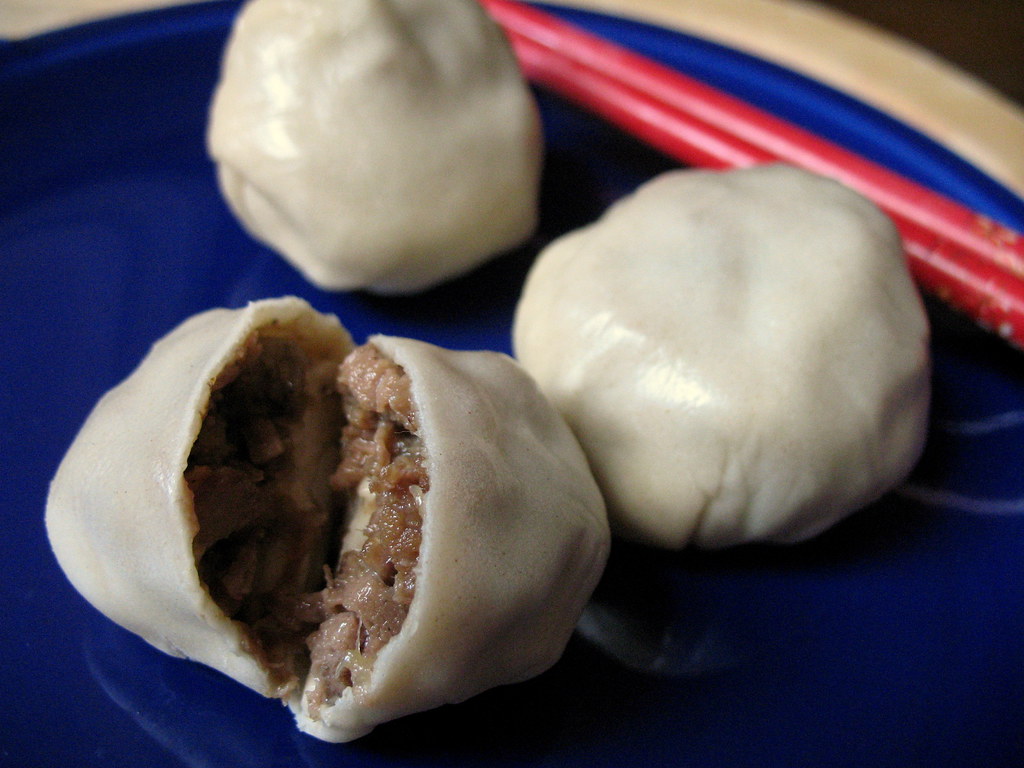 Little dumpling, who made thee? I know who did, originally. This dumpling was featured on the menu of the notorious 20-course, $1,500 a plate dinners propelled by two of the world’s greatest working chefs, Thomas Keller of The French Laundry and Per Se and Grant Achatz of Alinea. Their dinners, billed as mentor-protégé collaborations, unfolded in New York, Chicago and Napa, at the duo’s respective restaurants. But this dumpling, shown above, was just made by little old me. And the rest of the courses from these dinners will also be made — has been made — by the rest of the team in the supper club A Razor, A Shiny Knife.


It’s been a wild journey cooking with A Razor, A Shiny Knife. Through dozens of supper club dinners in New York, I’ve helped prepare (and eaten) the most impressive, and often insane, culinary creations I’ve ever seen done in a home kitchen, spearheaded by Michael Cirino and executed with a rotating flock of amateur as well as professional chefs. But none are nearly as grand as our current infatuation: a series of dinners fashioned meticulously after Keller and Achatz’s 20-course affairs. Now, after completing three of these dinners in New York City and three more in Chicago last weekend, the series will come to close in San Francisco this weekend. I didn’t go to Chicago, but I’ll be there in San Francisco, and so will these dumplings, too.

A few weeks ago, a bunch of us gathered at Michael’s apartment to nail down our tactics for the upcoming two-city tour. Since the New York dinners in December, some courses had been changed, swapped out, or had altered slightly at the real chefs’ latest enactments. We pored over photos from bloggers and photographers who’d attended those dinners. “What’s that white stuff at the bottom?” we pointed and asked. “Who knows how to make raspberry glass?” — referring to the immaculate, tissue-thin sheets of shattered magenta crystalline candy. My favorite line of all came from a string of emails that the group sent about in reaction to a new batch of found photos. One showed a dessert course with a foot-tall, sculptural ribbon of chocolate: “That looks real pretty and I’m sure way easy to make… and monkeys might fly out of my butt.”

After holding practice dinners recently in Brooklyn, we found that we could, actually, make the raspberry glass. And amazingly, everything else. I’m certainly not responsible for barely any of it, but it has been incredible watching what my fellow amateurs and renegade chefs have managed to pull off.

By far the easiest course to execute has been deemed the beef course (scroll down to see a photo), one of Thomas Keller’s. Called “Calotte de Boeuf Grillee,” it consists of rare steak with sour cherry sauce and horseradish pudding. Brilliant. Simple. Except for… what was that little white ball on the side? We learned that it was a “brisket and cabbage dumpling.” So when recipes were split up amongst the team to write, I volunteered to take charge of this one. (After all, I love making dumplings.)

Off the bat I figured the dumpling skin would be made from basic flour-and-water dough, while the filling would be a somewhat simple braised brisket and cabbage mixture, chopped up finely and moistened with the reduced stock. It would taste more or less like a pot roast, but come in a bite-sized package of steamed, Asian noodle skin. As for the shape, it seemed like the object of this dumpling was to be as spheric as humanly possible, and for the dumpling wrapper seal to be as seamless and inconspicuous as the (culinary) gods in heaven (aka Napa Valley) could muster. This is an impossible feat, naturally: wrapping dough around a mound of brisket filling and closing it without a visible seal. So after putting on my thinking cap for a long, restless night, I came up with the following maneuvers. 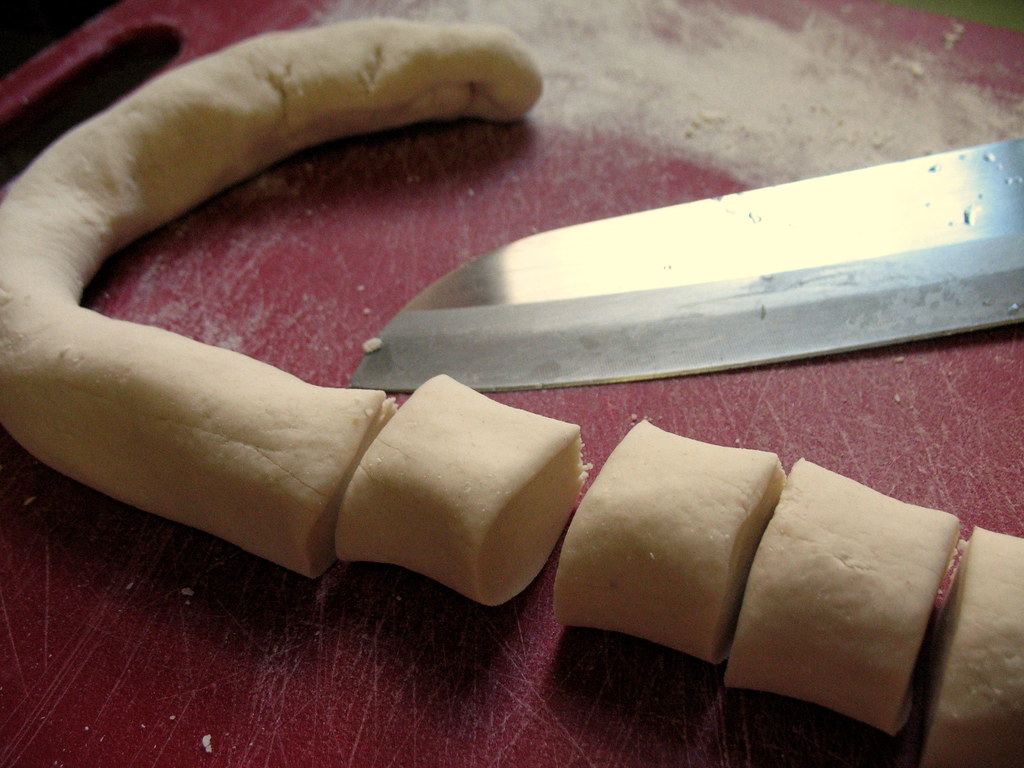 First: knead a basic Asian dumpling dough. Roll into a snake and cut to 1-inch pieces 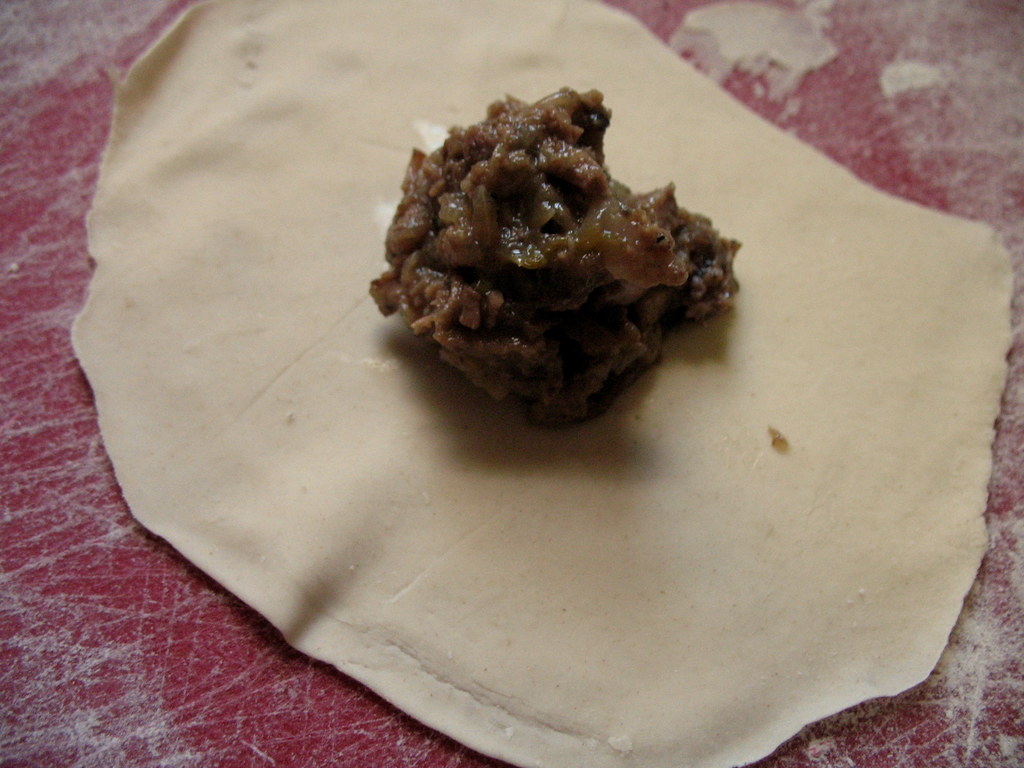 Roll into roughly 4-inch rounds. Place down a spoonful of brisket and cabbage mixture that you already braised, cooled, finely chopped and forgot to photograph 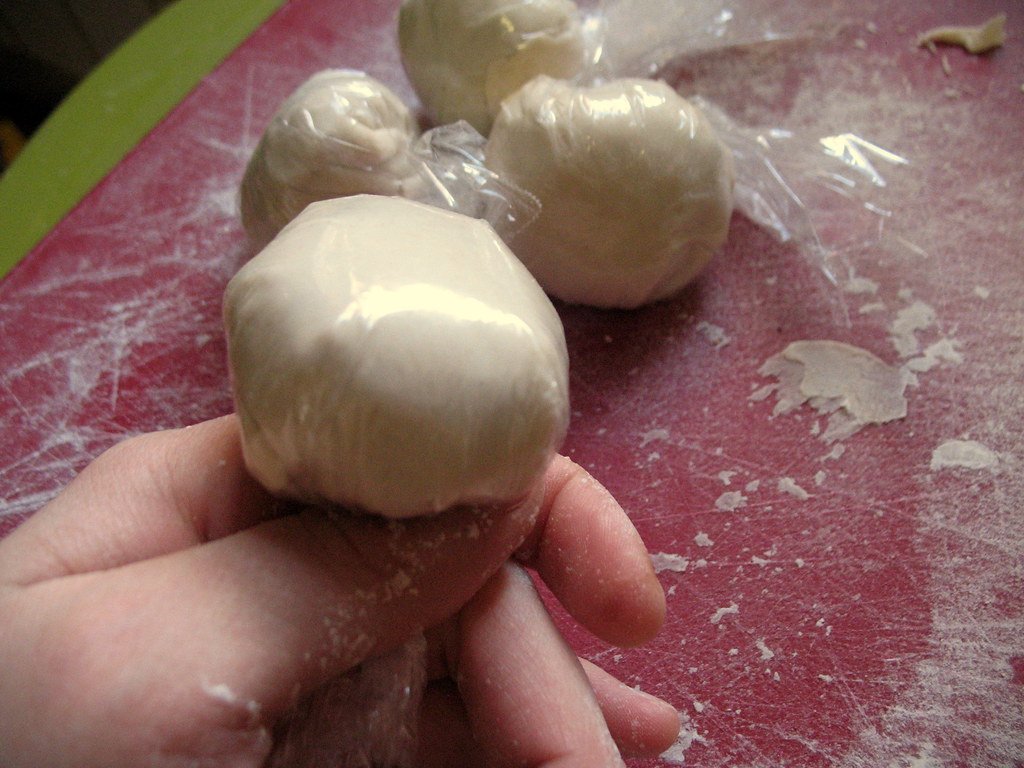 Make sure your dough is pretty sticky, not too well-floured, then close dumpling securely but with a minimal amount of overlap on the bottom. Cover with plastic wrap and shape into a nice ball. 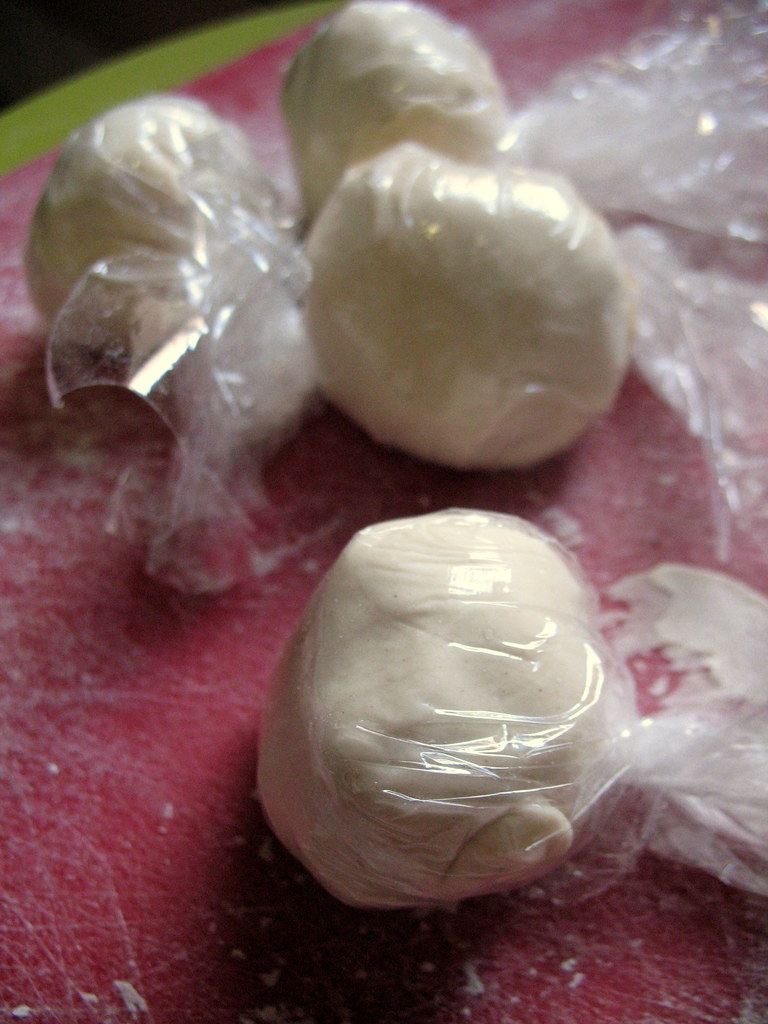 Twist the plastic wrap at the sealed end of the dumpling. Now chill for at least an hour to set the shape some more. 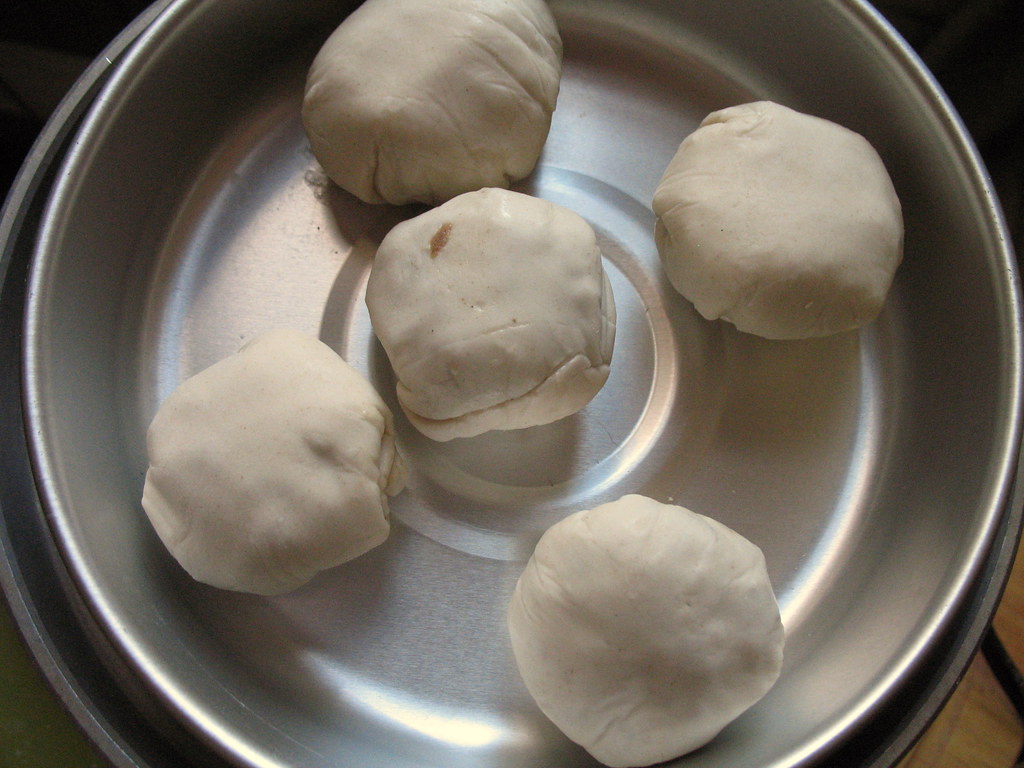 Steam for 8 minutes, just to cook the dough.


I know what you’re thinking: all this for a mouthful of food. The dumplings shown may have come out a little bigger than the final versions. We also sprinkled freshly chopped chives into the dough just before kneading it for an attractive, green-speckled surface, like the ones in the photos, for another round of them at a practice dinner. After making these two batches, I have to say that these dumplings are really delicious. Juicy, savory — just a tantalizing mouthful of goodness. And I appreciate the clever take on typical Asian dumpling fillings of meat and cabbage (albeit raw before steaming). Also, I took them to work for lunch, and I must say they travel and reheat terrifically.

I don’t expect anyone to attempt to make most of the courses from these dinners at home. This is ambitious, ridiculously difficult food to make, as Chef Achatz said himself. But it just so happens that this one element of this one course amongst the twenty is something I can really sink my teeth into. Without worrying too much about the spheric shape, these dumplings are just as practical and easy to make at home as any — and come to think of it, a good way to use up some leftover stew. We’ll see, maybe even more of these courses can be translated into home cooking-friendly form after San Francisco.

Before I take off, here’s a quick glimpse at some of them, from a previous dinner in New York: 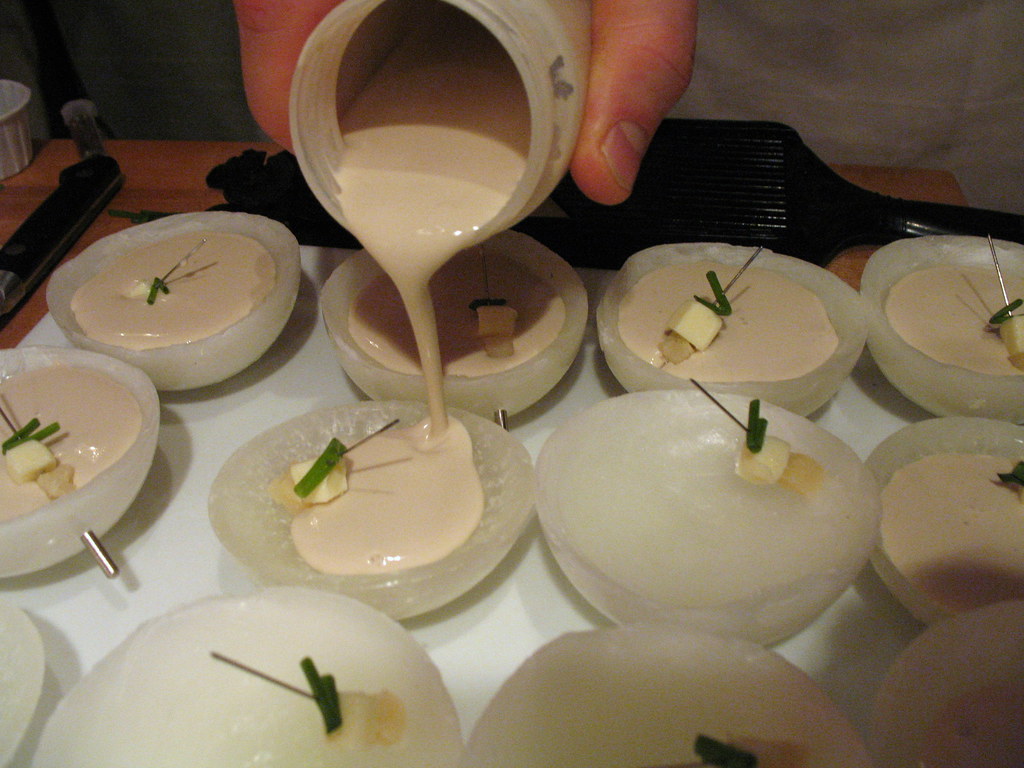 Hot Potato/Cold Potato: here are handmade wax bowls holding cold potato and white truffle cream soup. On the pin stuck in each one is a cube of butter, a cube of parmesan, a spindle of chive, and next to that (not pictured) went a hot, buttery little ball of potato and a slice of black truffle. The diner would pull the pin out, so that all the stuff fell into the soup. But eat it quick, so you’ll get to taste the hot potato with the cold potato soup at once. 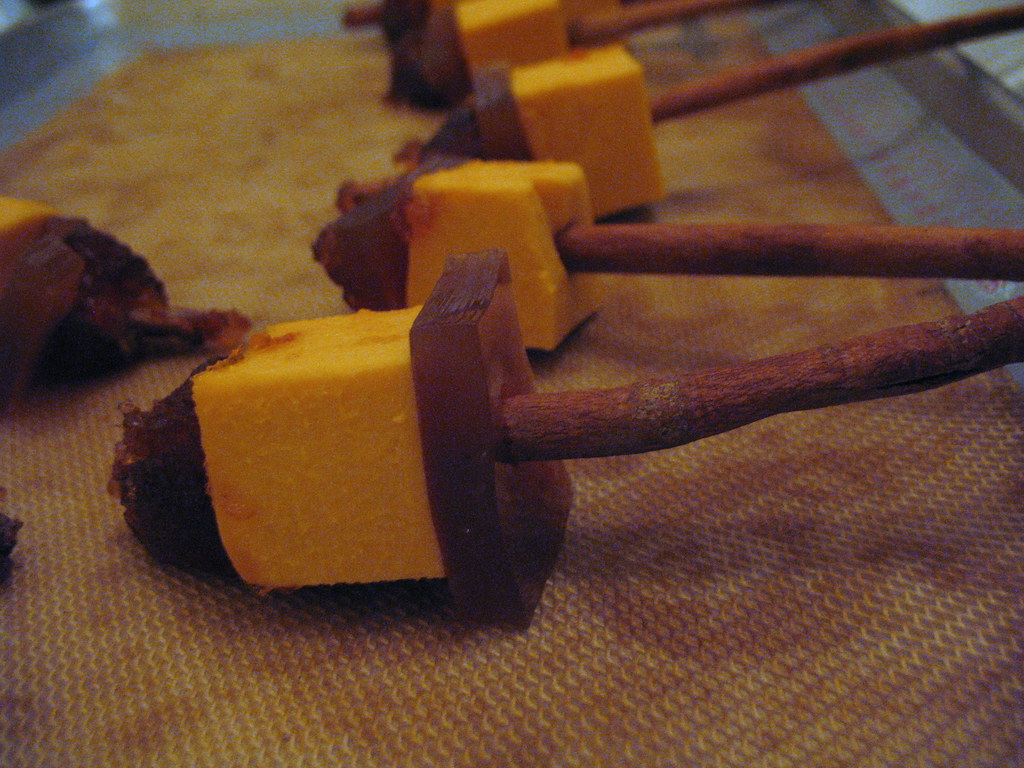 Blocks of sweet potato custard, Bourbon jelly and quince paste on long cinnamon sticks. The blocks are deep-fried and the tail end of the cinnamon lit on fire just before it reaches the diner, so that while eating it, one gets the aroma of a burned-down gingerbread house. 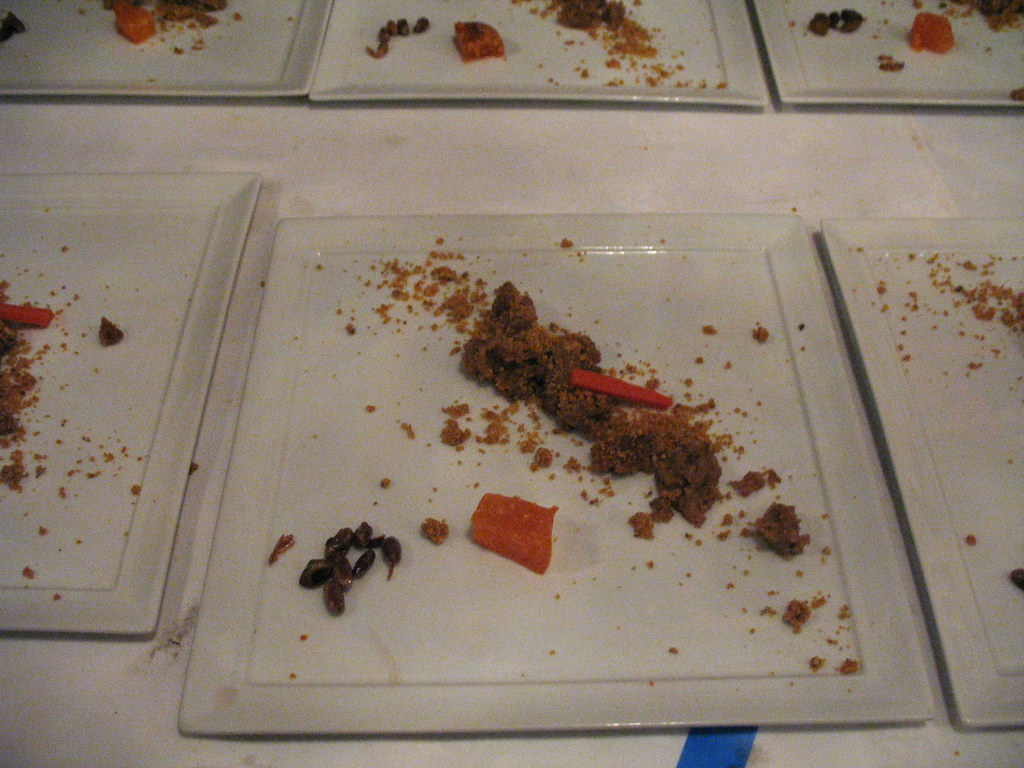 This is about one-eighth of the elements that actually go on the plate for Grant Achatz’s deconstructed carrot cake. 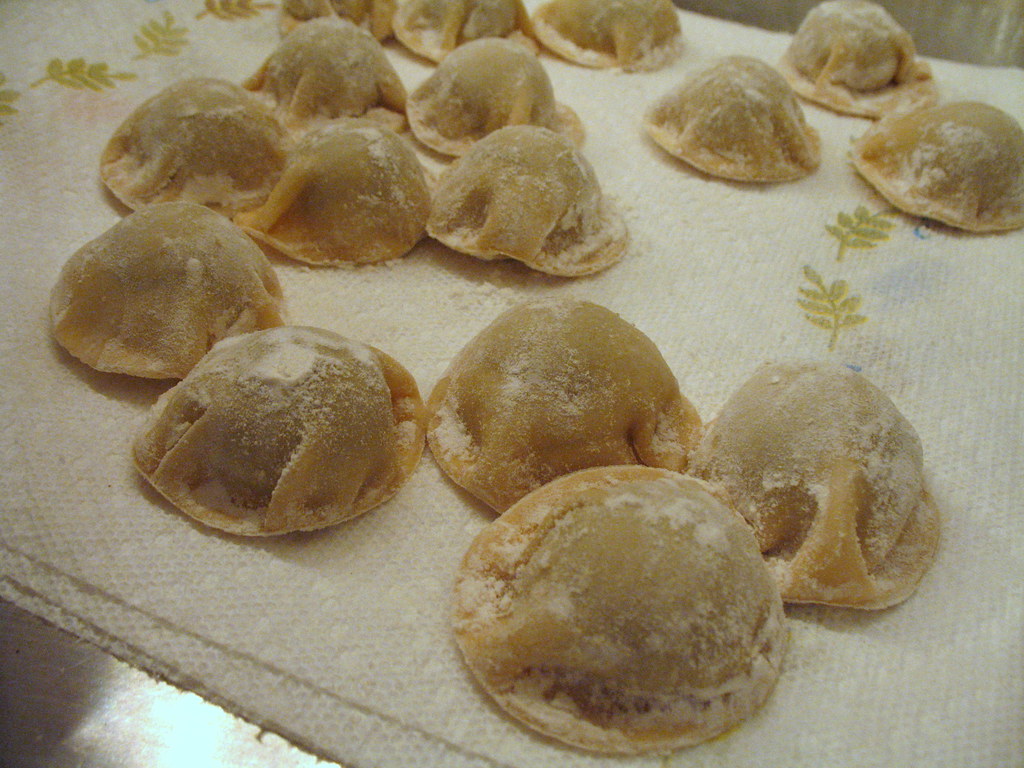 These raviolis are filled with gelled black truffle stock that melts when cooked and “explodes” in one’s mouth when eaten (called “Black Truffle Explosion”).

Season the beef with salt and pepper. Brown cubes on all sides in a large, heavy-bottomed pot with some vegetable oil, working in batches if necessary. Remove. Brown the carrot, onion and celery in oil for 4-6 minutes, then return the brisket, add bouquet garni and cover with stock. Bring to a boil, reduce to a low simmer and cover. Braise for 2 hours, adding the cabbage 30 minutes before done.

Remove cabbage and meat from the pot and set aside. Drain braising liquid and discard any solids. Return the liquid to the pot and bring to a low boil to reduce. Meanwhile, chop the meat against the grain into fine pieces. Shake or squeeze excess liquid from cabbage and chop finely. Combine with the meat in a large bowl. Keep reducing the braising liquid to about one-third, then add the beef and cabbage mixture. Continue to reduce, adding salt and pepper to taste, until mixture is just moist but not at all soupy. Let cool.

Make the dough: place flour in a large bowl, gradually add in water until the dough just comes together, mixing with your hands. Turn onto lightly floured surface and knead about 5 minutes or until smooth. Roll dough into a log no thicker than 1 inch. Cut or tear log into 1-inch chunks. Roll each chunk with a rolling pin into 4-5 inch circles. Place about 1 tablespoon of the beef filling in the center. Close the edges around it and pinch the bottom to seal shut, but don’t create a big lump in any one area. Shape back into a round, ball shape and cover with plastic wrap, twisting the plastic around and around at the bottom, sealed part of the dumpling. Chill like this for 30 minutes.

Remove plastic wrap. Place dumplings seal side-down in a steamer rack or rice steamer and steam for about 8 minutes.

Six brownie points:Brisket is a relatively lean cut of beef, so when you combine it with cabbage, a thin sheet of wheat noodle, and a flavorful, yet lean, reduced stock, it’s surprisingly un-fatty. Of course, the more fat, the more flavor, so when cooking with this club we don’t trim beef fat — more often than not, rendered fat is added to meat while it’s being cooked. Choose your own adventure!

Three maple leaves: Cabbage is in season and for my practice round, it was picked up at the Greenmarket. Instead of brisket that time, I actually used some leftover beef something or other that was in my freezer for some long-ago reason. Even if much of the food at ARASK dinners make little sense to you, it still always makes sense to cook seasonally and purchase from local purveyors. That’s what the famed chefs have done in their dinners, for the most part, and that’s what we’re doing while traveling, too.