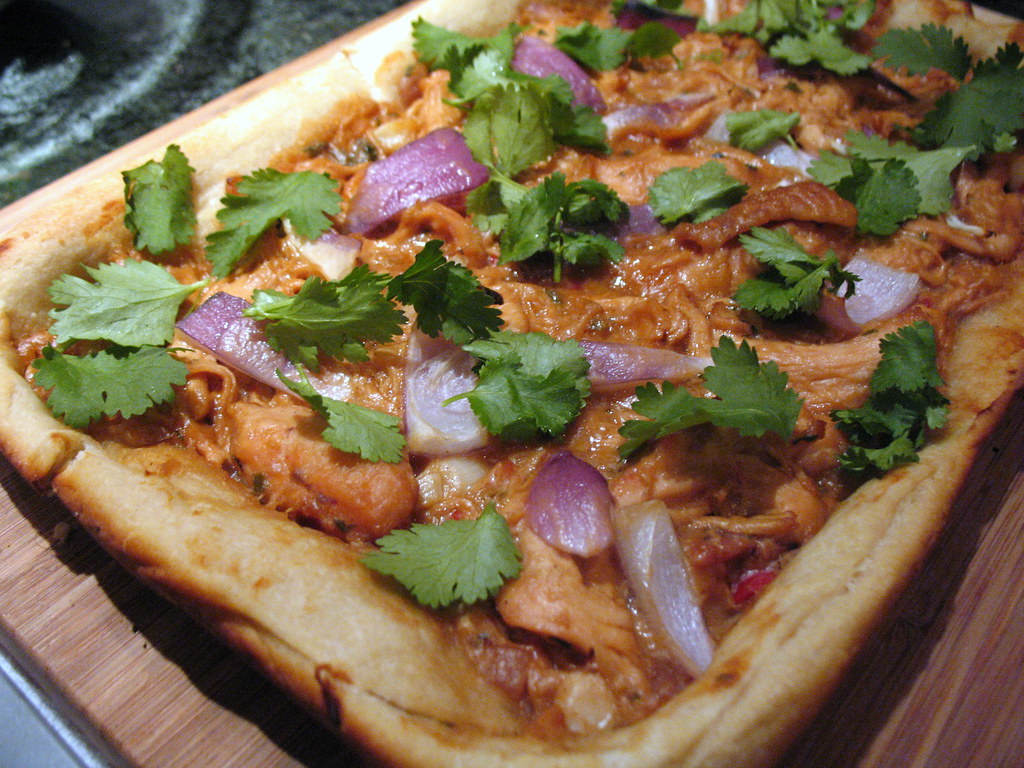 Our new president is a well-traveled, well-cultured man. Just take a look at the lede to this New York Times story to scratch the tip of the iceberg:

“The president’s elderly stepgrandmother brought him an oxtail fly whisk, a mark of power at home in Kenya. Cousins journeyed from the South Carolina town where the first lady’s great-great-grandfather was born into slavery, while the rabbi in the family came from the synagogue where he had been commemorating Martin Luther King’s Birthday. The president and first lady’s siblings were there, too, of course: his Indonesian-American half-sister, who brought her Chinese-Canadian husband, and her brother, a black man with a white wife.”

This is an incredibly exciting time for Americans who might have been looked down upon in another time for being “foreigners.” It’s also a revelatory time for Americans of multicultural backgrounds, and as the producers of a new documentary in the making called “Gen O” see it, a time to celebrate multiracial pride.

As mentioned, I spent my last weekend doing just that — embracing my mixed-race heritage while in DC for the inauguration. I had some great conversations with fellow halfies: half-black and half-whites, half-Asians like myself, half-Middle Easterns and half-Hispanics. There is a lot of common ground in being half-something, no matter what the two sides (or multiple races/ethnicities) of each person might be. As Akiko put it, she finds she has more in common with half-Asians than she does with 100% Japanese people. Go hapas!

But my favorite part of this experience was expressing our pride through the language of food. Out of some stroke of brilliance, Akiko decided to make a menu based on all the countries and cities that Obama has either lived or has relatives who live, such as Kenya. With each dish representing two of these cultural references, we came up with the following pairs: Harlem/Hawaii for the Spam sushi rolls; Kenya/Kansas for the beef with ugali and collards; Boston/Bali for the “Bali Cream Pie”; Jakarta/Chicago for the two Indonesian-inspired deep-dish pizzas. We could have gone on. What about Washington, DC?

Coulda, woulda, shoulda. But there were few regrets around the table, from the diners as well as the team of cooks we assembled, about the night’s meal. I think we might even have to repeat it sometime, for some other cross cultural-themed occasion. At the very least, I’ll probably be making the gado-gado pizza again! This was a dish that my friend Mayur took command of. Gado-gado is a common dish in Jakarta and throughout Indonesia. Obama moved to Jakarta with his mother and stepfather when he was six, and lived there for four years before returning to Hawaii to live with his grandparents. As we all well know, Chicago has served as Obama’s home for the past several years. Chicago-style pizza is actually one of his favorite foods. Who would have known that Indonesian flavors and a puffy, oily pizza crust would pair together so nicely? Thanks for the inspiration, Mr. President! 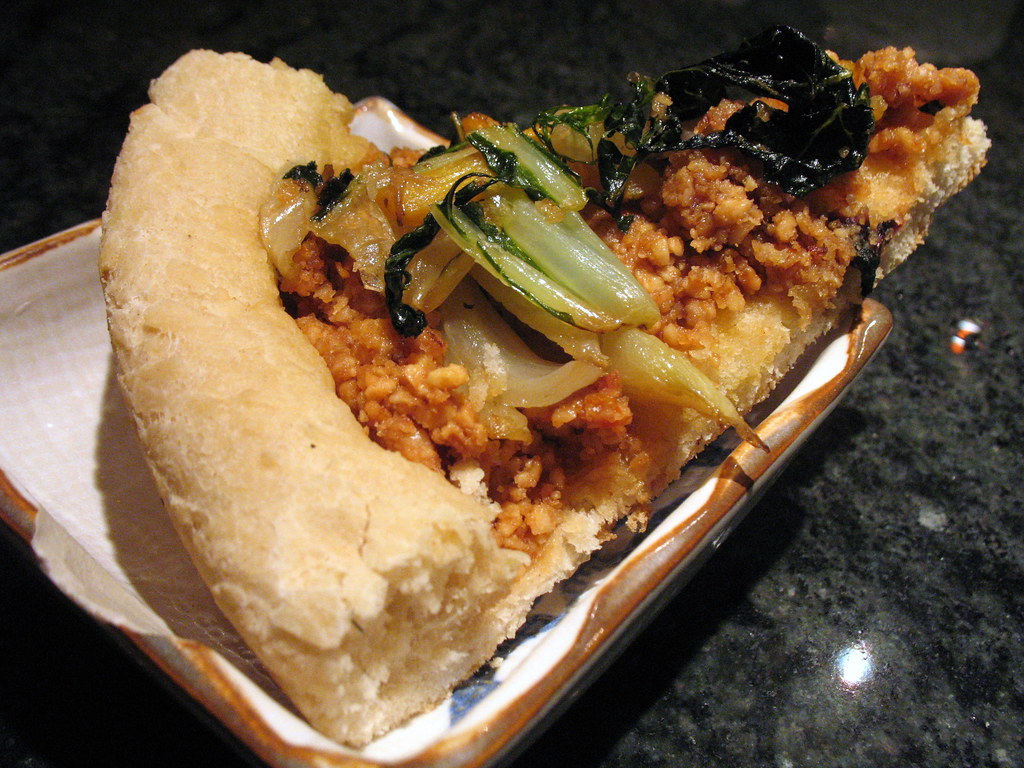 a slice of deep-dish gado-gado pizza 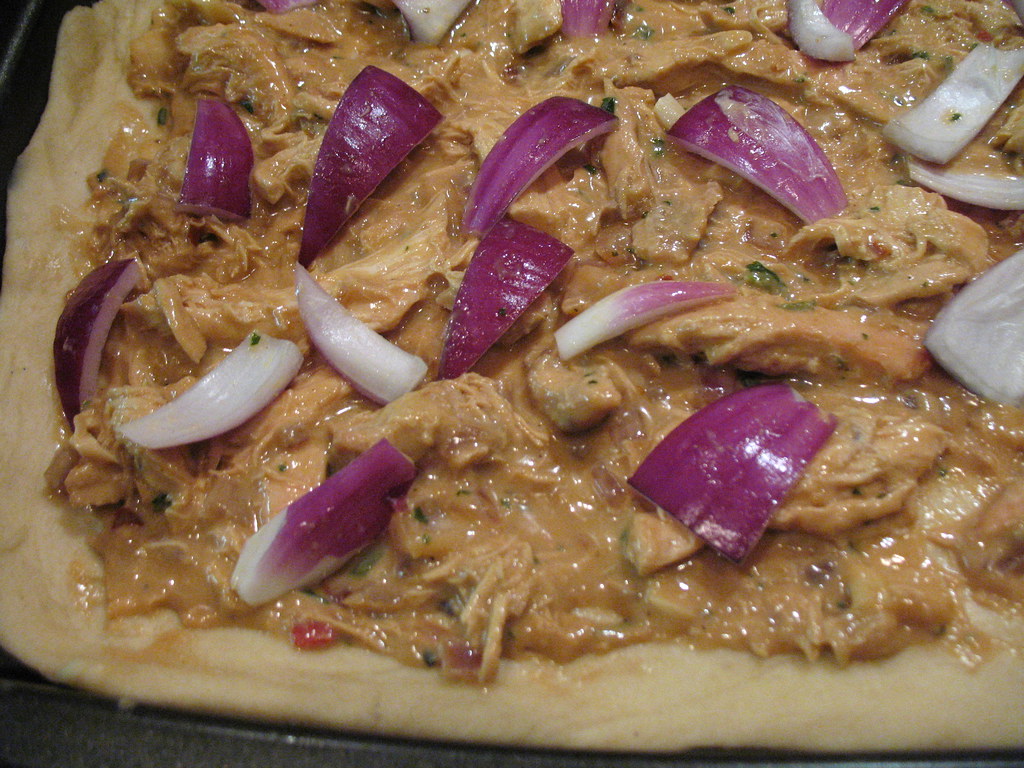 the chicken satay pizza, before baking

The other Indonesia/Chicago pizza of the night was a chicken satay version; this was really an afterthought of mine, winged from ingredients around the kitchen. Since we’d made a Thai curry soup with curry ravioli “explosions” (fashioned after a dish served at Alinea that this group of chefs has become very familiar with lately, called “Black Truffle Explosion” — more on that tomorrow), there were a lot of leftover Thai ingredients. Coconut milk, limes, cilantro and spices. Although a more Indonesian-tasting version of satay would have been more Obama-appropriate, I went with a Thai-style chicken satay for this deep-dish pizza. Here’s a glimpse at some of the other offerings of the night: 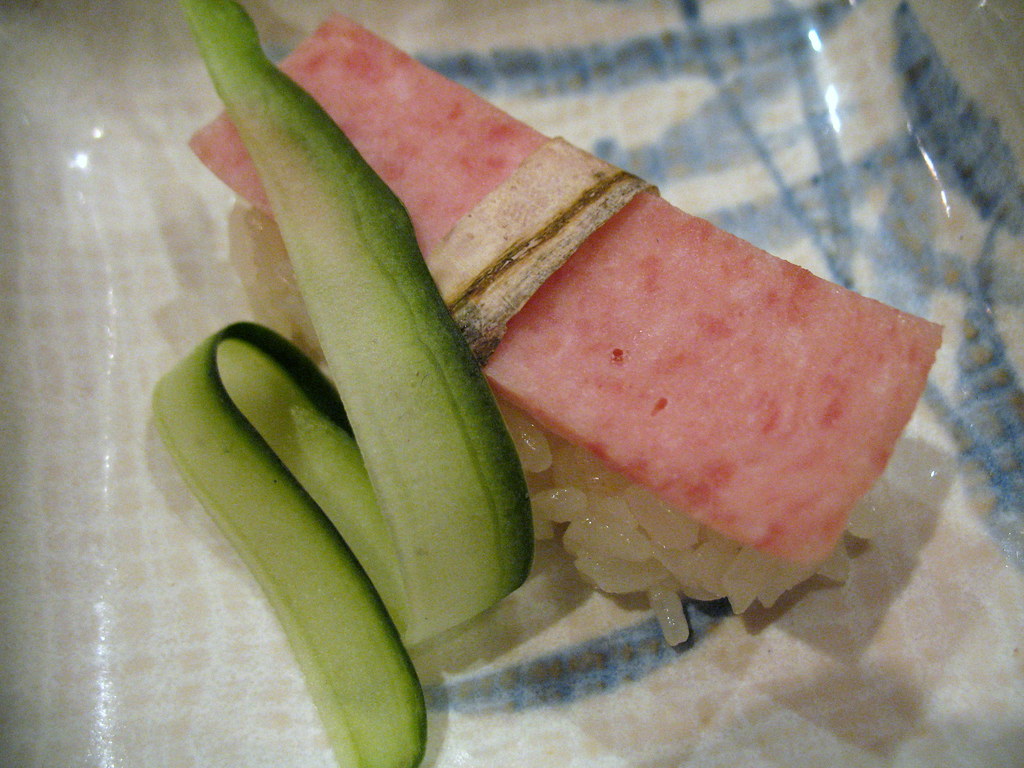 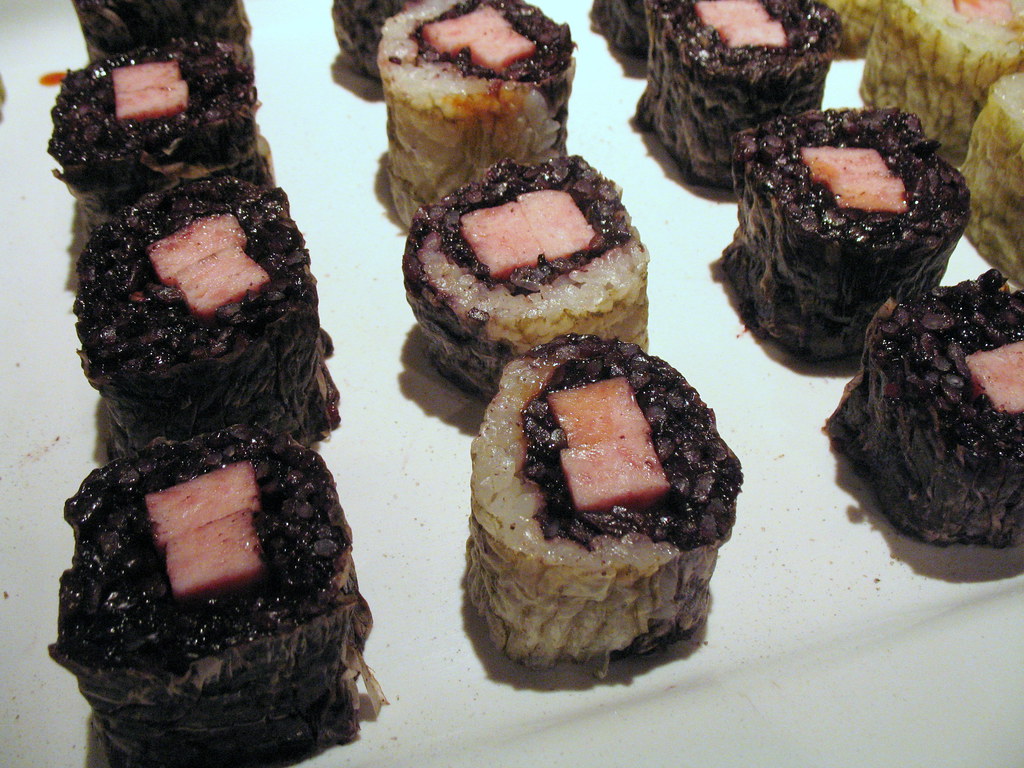 and as two-tone (get it?) rolls with black Thai rice and white sushi rice (the nori was also beautifully swirled green and white sheets) 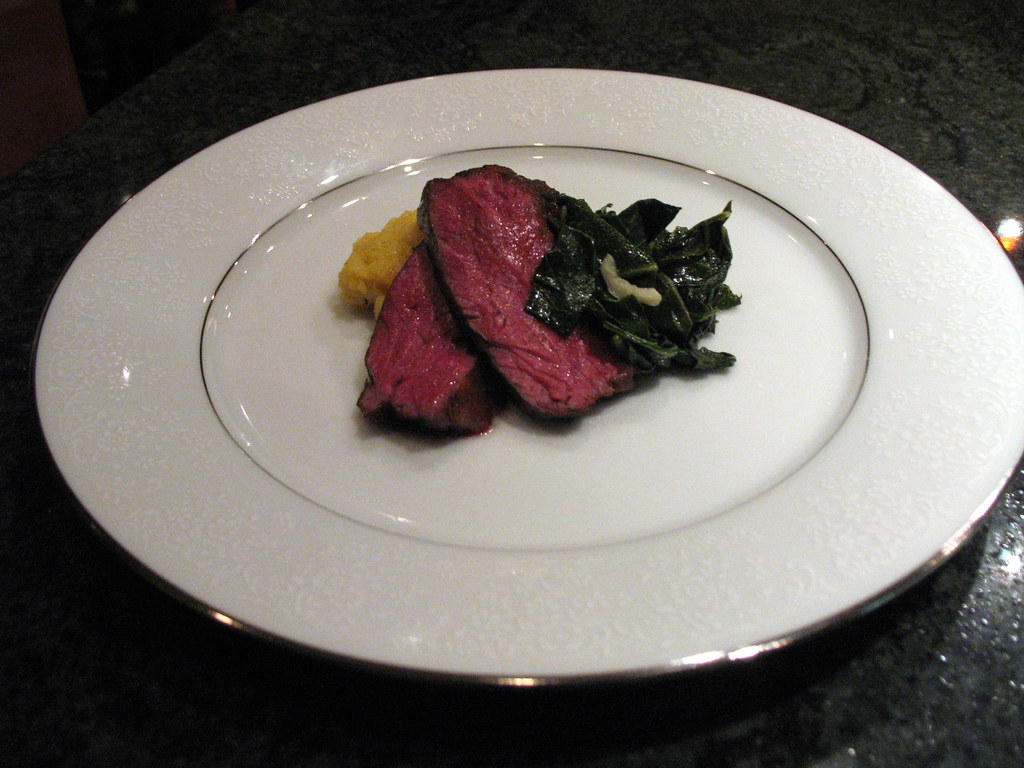 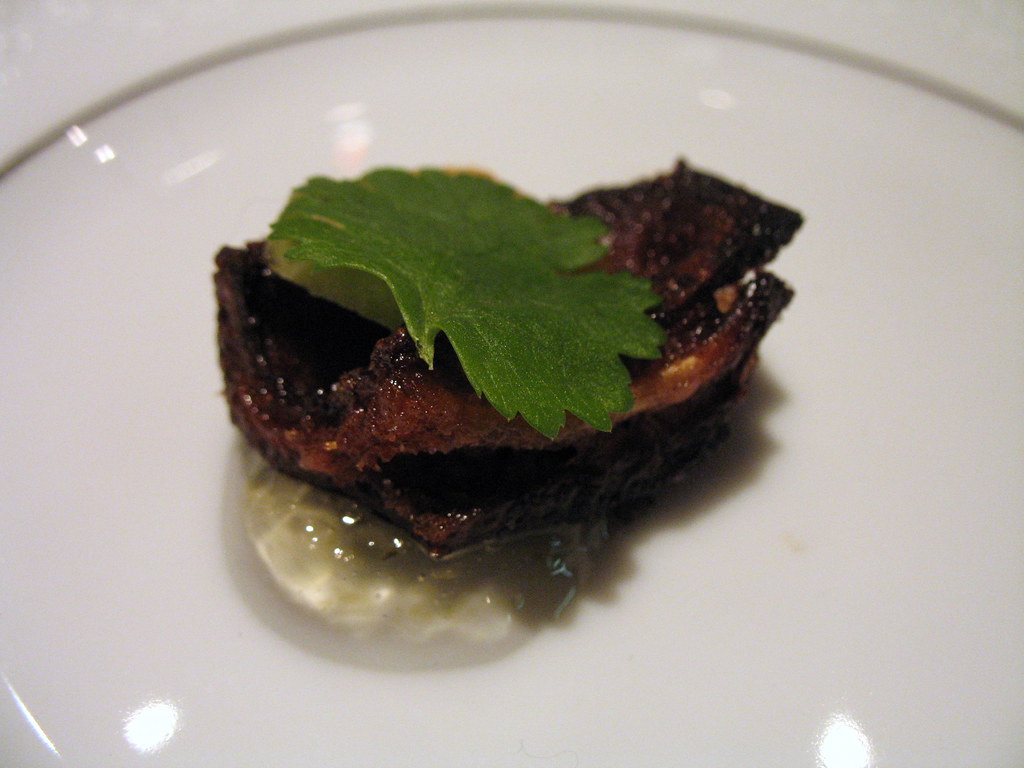 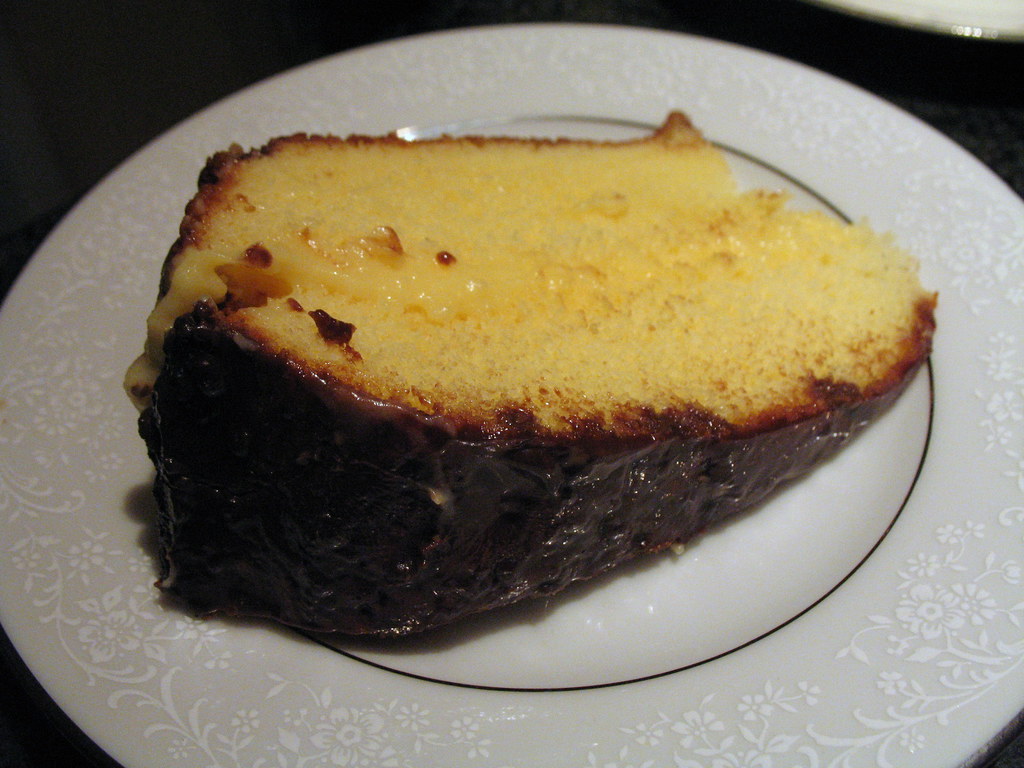 
Admittedly, I was so entrenched in cooking and serving that I only heard snippets of conversation during the dinner service. But once the plates were cleared, I got to join the group at the table and share some insights from my experience. It was a warm, eye-opening occasion, and I can’t wait to see how the documentary turns out. This is not exactly a new discovery for me, nor is it the most modest, but I’d like to conclude that mixing diverse cultures not only produces some of the most interesting, unique people in the world, but also the most exciting, tastiest food. 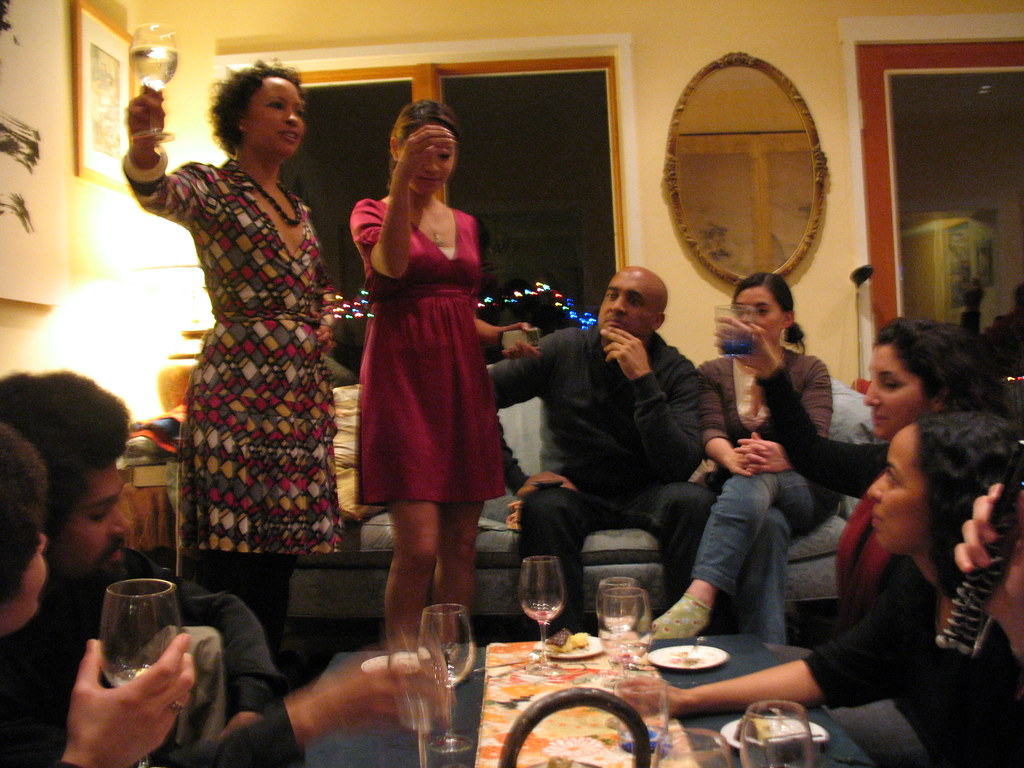 the multiracial gang makes a toast

Note on method: since there was pre-cooked chicken around the kitchen (left over from making some stock), I tore the meat into chunky pieces and marinated it like that, instead of raw. After it marinated for about three hours, I shook off the pieces and grilled them on a hot pan for a mere minute or so to a side. I brought the reserved marinating sauce to a boil, stirred in the peanut butter, and used this for the sauce to spread on top of the pizza, followed by the chicken. This worked out fine in the end, and I’m sure that the same method could be done starting with raw chicken cut into small pieces, though you’d need to brown them a little longer than one minute.

In a small bowl, combine the yeast with the water and set aside for 5 minutes. Combine the flour and salt in a large bowl. Add the yeast and water mixture, and stir to combine. Add the olive oil just until the dough comes together into a ball. Knead well for 8-10 minutes. Form dough into a ball and place in an oiled bowl. Cover bowl with a towel and place in a warm spot for 2 hours. After two hours, punch down dough and form into two balls. Stretch each ball of dough into the shape and size of two equal-sized pans that are at least 1 inch deep. Top with recipes below.

Pulse peanuts, chilies, garlic and shallots in a food processor until the size of coarse crumbs. Heat a saute pan with 1 tablespoon of the oil and saute the mixture for 3-5 minutes, adding the salt and sugar. Add the lemon juice, toss, and turn mixture into a bowl. Stir in the peanut butter.

Heat the other tablespoon of oil in the same pan over high heat. Sautee the vegetables, adding salt to taste, for 1-2 minutes. Remove from heat. Spread peanut sauce on the bottom of the pizza dough and top with the sauteed vegetables. Bake in a 400-degree oven for approximately 20 minutes or until the edges of the crust are lightly browned.

Combine the soy sauce, coconut mil, chopped red onion, garlic, chilies, lime juice, fish sauce and sugar in a bowl and stir. Add the chicken, cover with plastic wrap, and refrigerate to marinate 2-3 hours (or up to overnight).

Heat a large sautee pan over medium-high. Remove chicken pieces from the marinade using tongs, and shake off excess liquid. Brown chicken for about 1 minute, turning with tongs once. Set aside in a separate bowl. Reduce heat to medium, and pour the rest of the marinade into the pan. Bring to a boil, stirring. Remove from heat and return to a bowl. Stir in the peanut butter. Taste for seasoning, adding additional soy sauce or sugar as desired. Spread sauce on top of the pizza dough. Add the chicken pieces evenly on top, along with the chopped red onion pieces. Bake at 400 degrees for about 20 minutes, or until crust is lightly browned. Remove from heat, and add cilantro for garnish.

Cost Calculator
(for 2 pizzas, or about 8-10 servings)

Six brownie points: Collectively speaking for the two pizzas, this is a very vibrant meal with plenty of nutrients as well as protein in both versions. We’d created the gado-gado one specifically to cater to the two or three vegetarians attending the dinner. Yet both have peanut and coconut, high saturated fat-bearing ingredients, and although coconut oil in particular is a tempestuous subject among nutritionists, Indonesian and Southeast Asian cultures have been consuming both fats for centuries and have remained relatively heart-healthy (definitely in comparison to the American diet).

Four maple leaves: Not so great. Let’s first consider the fact that Akiko and I drove, rather than took public transportation, to Washington, D.C. I suppose we could have fit three more people in our car, or two more, noting the amount of food and equipment we brought with us. Anyway, the food served at this event was pretty scattered in terms of sustainability: the carrots and radishes were bought from the Greenmarket that Saturday, the chicken was free-range and organic (I believe?); then there were all those Indonesian spices and ingredients like coconut milk and limes, definitely not local.