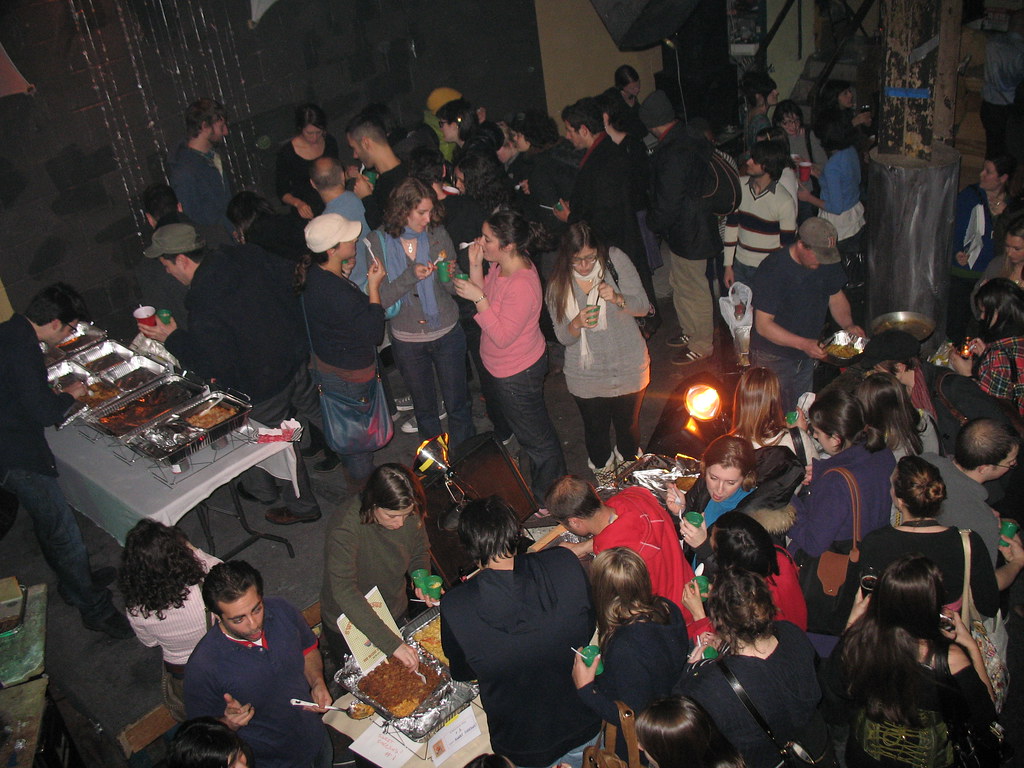 Okay, forgive my very poor journalism for a moment, and let me just relate to you the dilemma I’m faced with right now. I went to a first-ever macaroni and cheese cook-off hosted by Midge Pingleton cutely named the s’MACdown last night. It was held at Glasslands Gallery in Williamsburg, Brooklyn, a music venue that I believe has never hosted a cook-off before in its existence. I fought my way through the herds of hipsters to get a taste of every one of those 20 macaronis and cheeses. I voted for my favorite. Then I had to leave, to check out my friend’s music show. Out of all the people I knew and trusted to tell me who won the s’MACdown, NOBODY SEEMS TO KNOW. Help me out here — will the winner please speak? 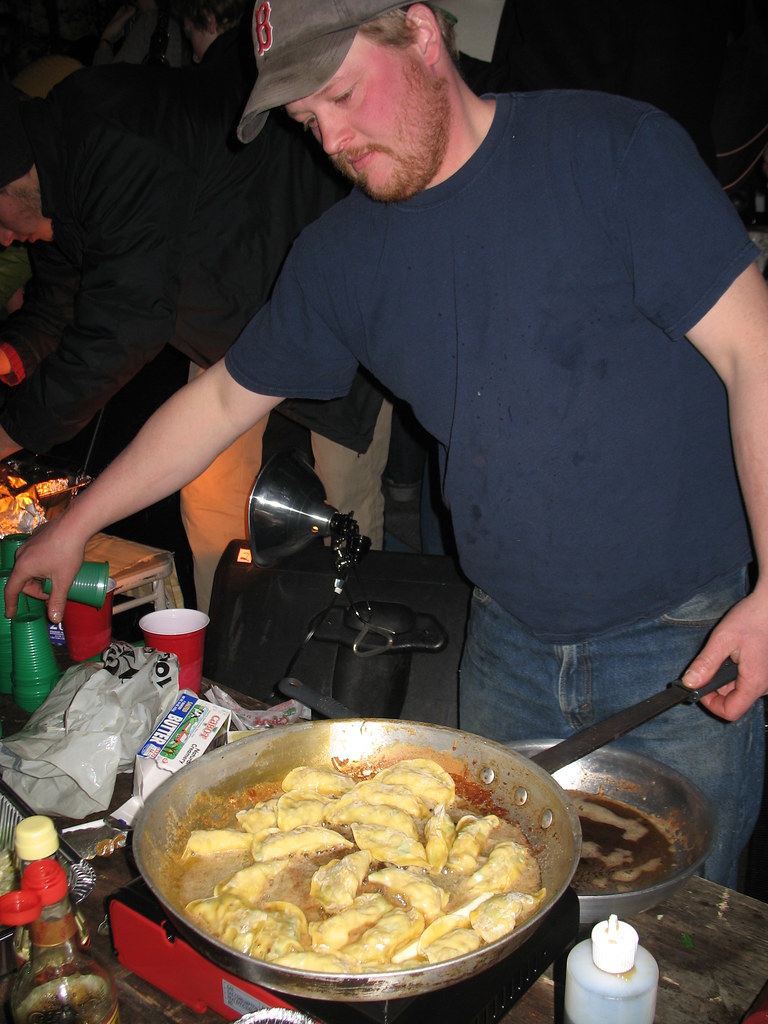 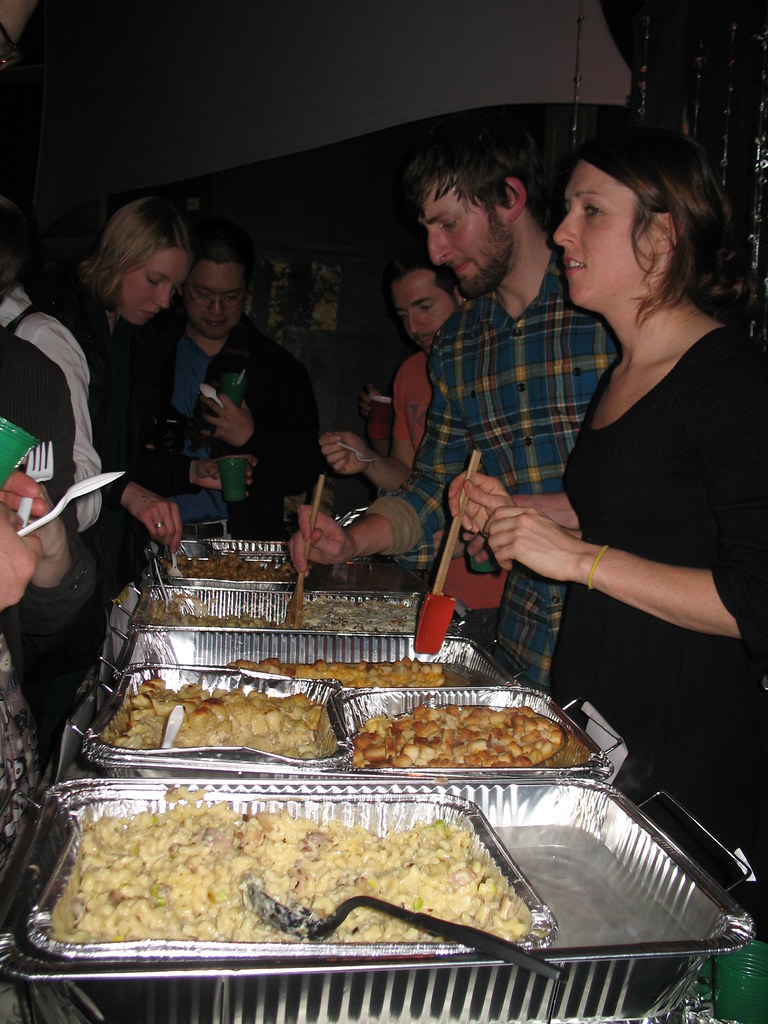 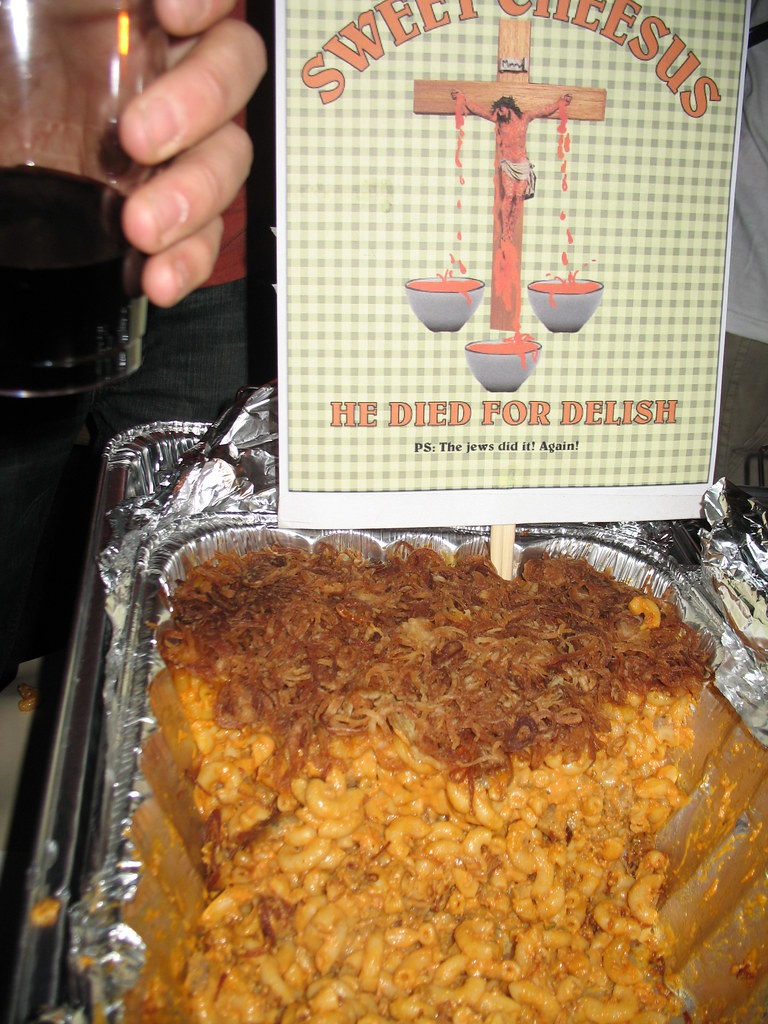 or did someone’s “Sweet Cheesus,” purportedly made with homemade sausages, win?


So my friends hit the drink pretty hard once all the mac and cheese was eaten up. The event began at 7pm, and by 8pm, pretty much every last greasy elbow was scraped up. My poor friends who entered the contest didn’t get to eat any of the other entries because they were too busy furiously scooping out samples to the masses during that time. But at the end of the night, at least Karol and Keith were able to relate to me that they had won fourth and third places, respectively. Unreliable sources? You betcha. Especially since they were, uh, a little too *busy* at the bar to remember names or details of who took the first two prizes. 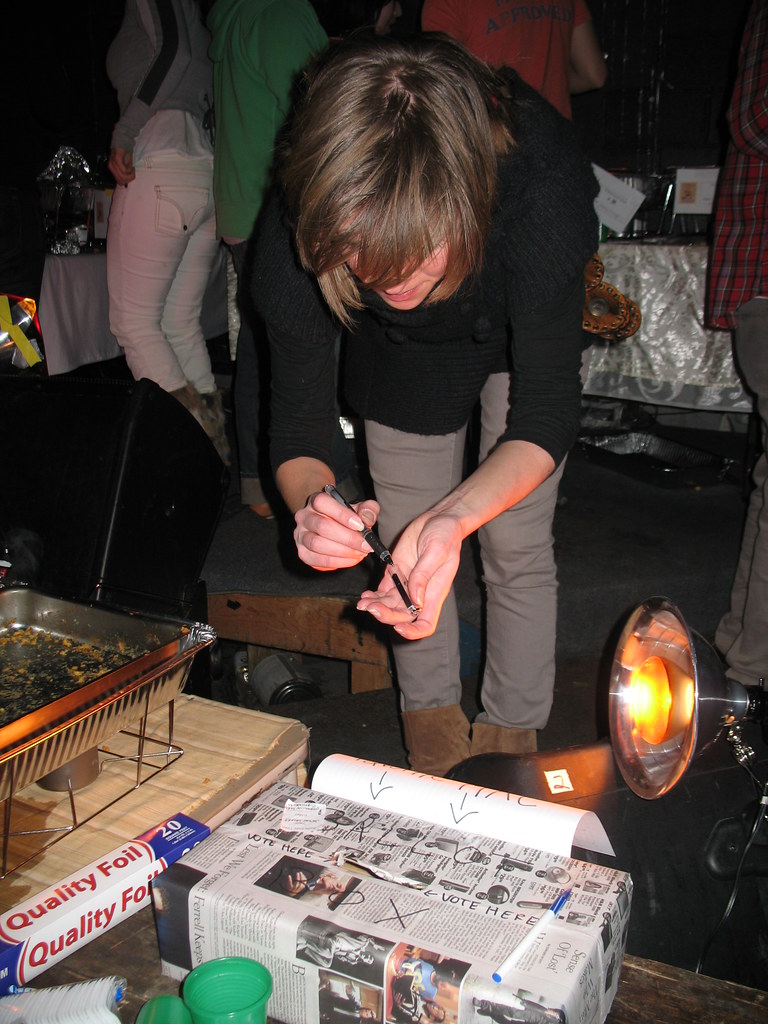 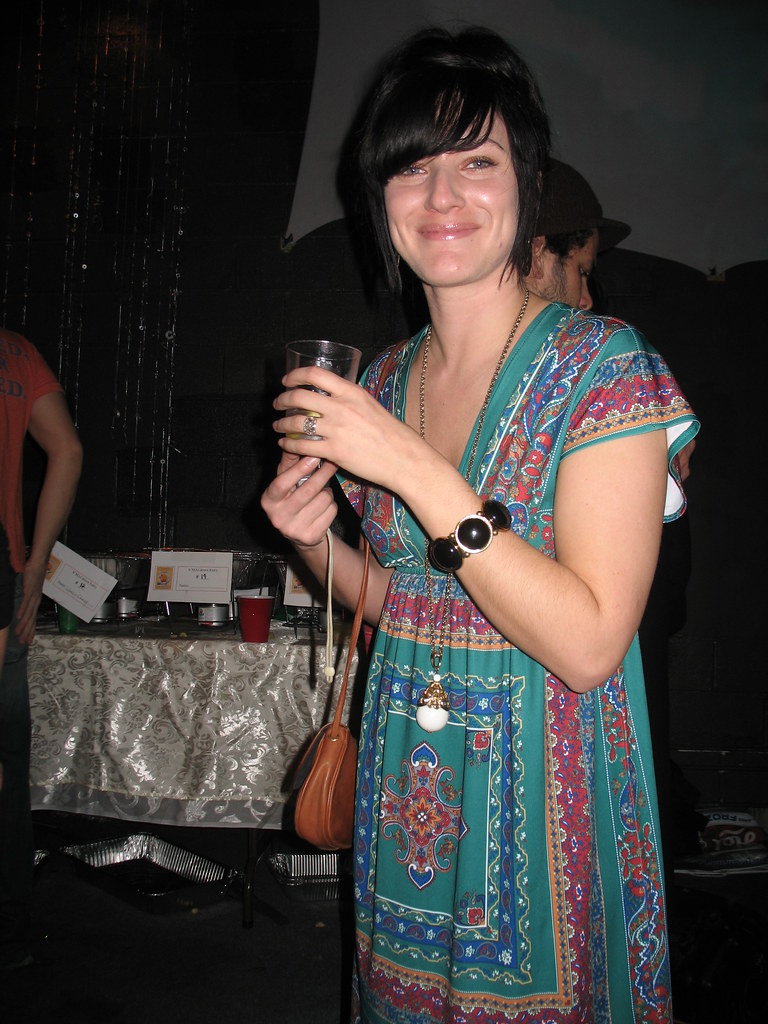 The evening’s hostess, Midge Pingleton (aka Melissa of many other cook–offs) is definitely no stranger to this blog. This was her first time hosting a cook-off, rather than competing in one. Since I’d just arrived from DC early that Wednesday morning, I didn’t have enough stamina to prepare a dish to enter in the contest myself, so I just came to this one as an eater. In another role reversal, my friend and fellow food blogger Keith from The Feedbag and Williamsburg is Dead actually entered the cook-off, making his first homemade macaroni and cheese (“that wasn’t from a box”) called “Feedbag’s Delight.” This man has snapped more photos of me eating and/or competing in cook-offs than anyone should ever have to on the job, so it was fun trading spots. 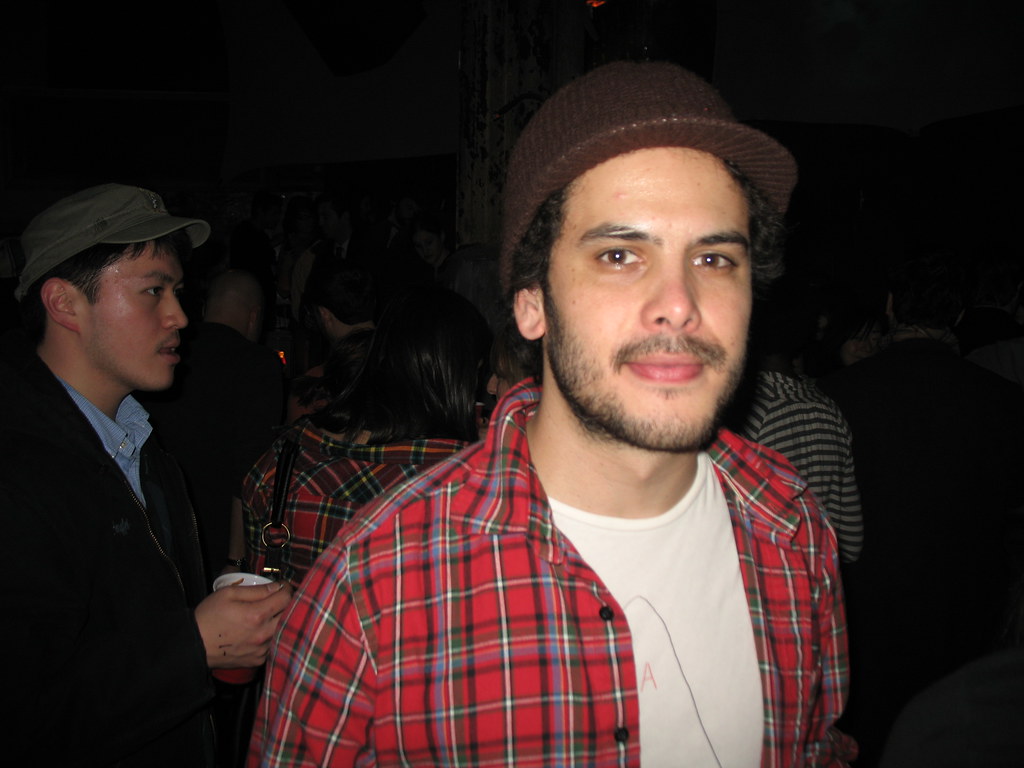 third-place winner Keith Wagstaff gets his game face on

And until I hear from Melissa or someone who can confirm the night’s winners, I’m posting Keith’s third-place winning recipe to share. It’s a good one, I must add. It’s made with local butcher Marlow & Daughters bacon, leeks, Irish cheddar, Gruyere and parmesan. Can’t go wrong! 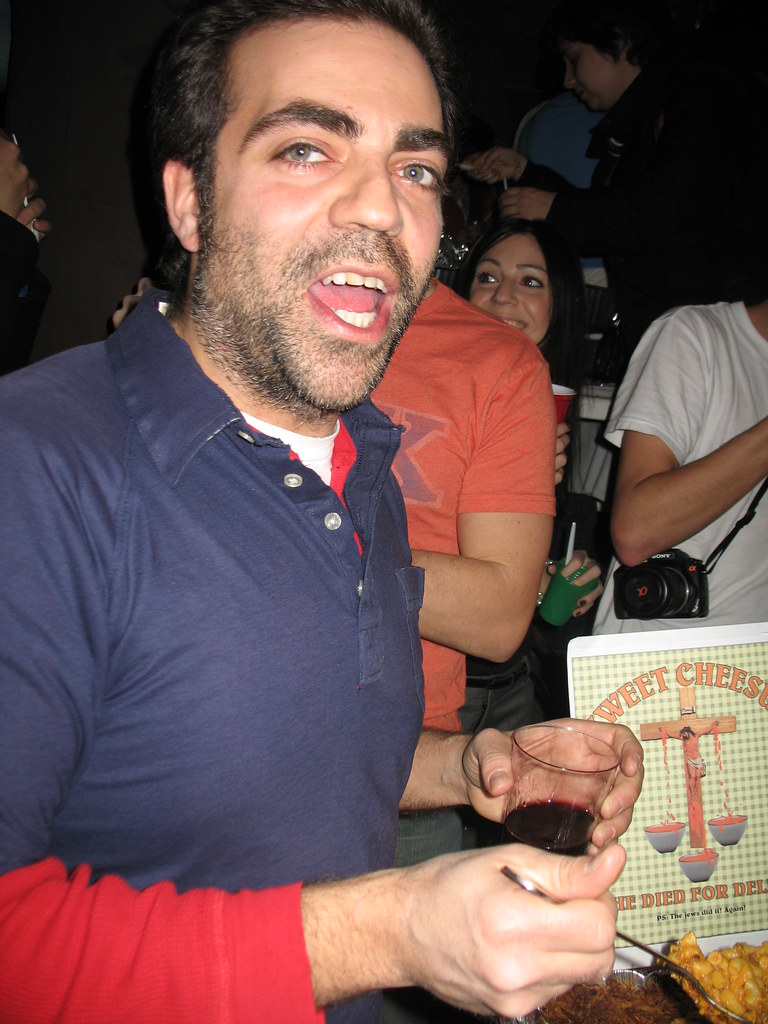 the winner has spoken!

And the first-place winner, thanks to reader comments, is Theo Peck of the “Sweet Cheesus” homemade sausage-studded mac and cheese! Theo also took first place a couple months ago at the Casserole Party, which I judged! Man, does this guy know how to use a casserole dish. I’m still dreaming of his colorful cauliflower casserole. And yet it was completely different from Theo’s meaty, cheesy and slightly spicy winning mac and cheese. Watch out, cook-off contenders!

Second place indeed went to Mike Betit of Tamarack Hollow Farms, for his daring mac and cheese dumplings. When I asked him why he decided to make Asian-style dumplings (the mac and cheese inside it was spiked with fresh ginger, scallions and garlic!) he said that it seemed easier than his original plan, to deep-fry balls of mac and cheese tempura-style. When asked why there was a distinct flavor of maple syrup, along with his own smoky bacon, he shrugged: “I’m from Vermont.” Buttery, cooked fresh on the spot, these dumplings might sound pretty randomly influenced, but myself and many voters that night agreed that everything came together and just worked. Bravo.

Cut bacon into 1/4″ pieces and cook in frying pan. Remove when finished and cook the thinly sliced leeks and minced shallots in bacon grease. Remove and save for later.