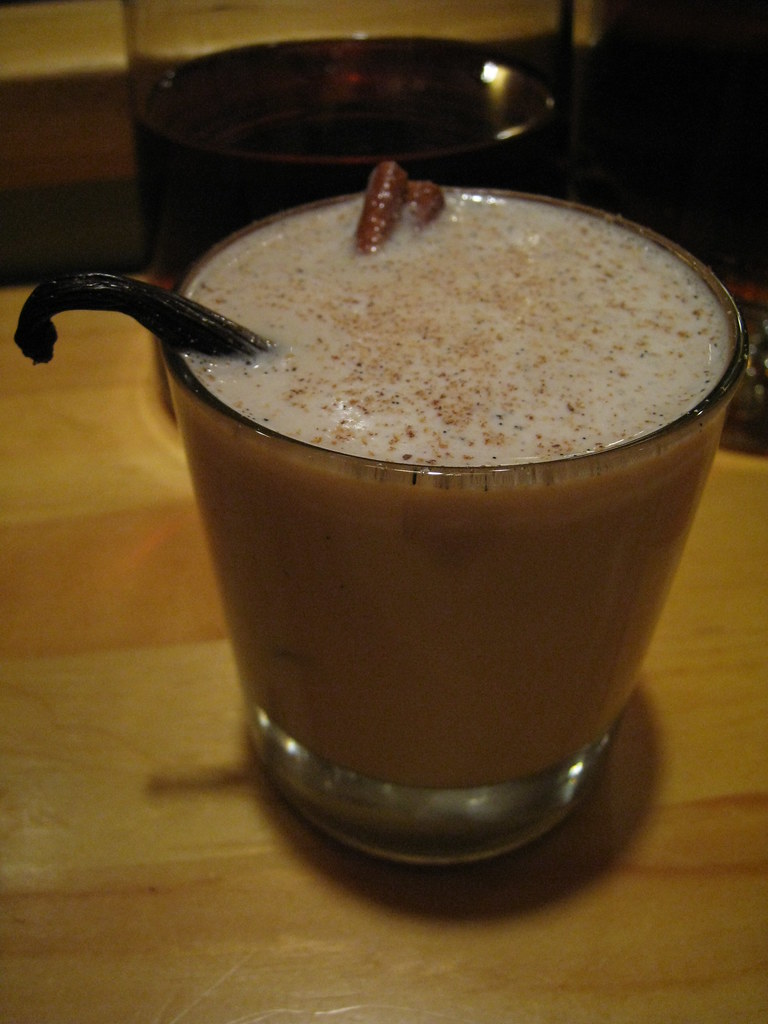 “Honey, I want to see where they make the lite cream cheese” is one of my favorite lines in that irresistibly silly Christopher Guest mockumentary, Best in Show. A wife says it to her husband after he suggests visiting “the place where they make the cream cheese” in Philadelphia. This is the way I feel about Christmas’ favorite drink. Mind you, I have nothing against the classic eggnog, in its rich, frothy, decadence. In fact, it wouldn’t be too far off from combining my recipes for Bourbon ice cream and chai ice cream, and letting it melt to a cool, creamy slush. Custardy cocktails! For goodness’ sake, who can live without them? BUT… all the same. I wouldn’t mind seeing where they make the lite nogs, too.


To be even more typical-girl effete, I will lament the fact that this season has already given me a few extra pounds. Are you nodding? It happens to most of us, I presume. But instead of increasing this damage with onslaughts of super-rich holiday food (and drink), I’m going to try to reroute this train — now. While still creating something tasty.

I decided I needed some help in concocting this sister to the classic drink, so I enlisted some friends. Food expert Mark and pedigreed cocktail whiz Nick stepped up to the challenge/let me raid their liquor collection and bartending tools. My first hypothesis: forget the eggs. Supplement the heavy cream with some milk steeped in vanilla bean and cinnamon sticks. Emulate the froth with a touch of sparkling water, and shake the whole thing up to just before it explodes. Grate some nutmeg on top. Have a party in a glass. 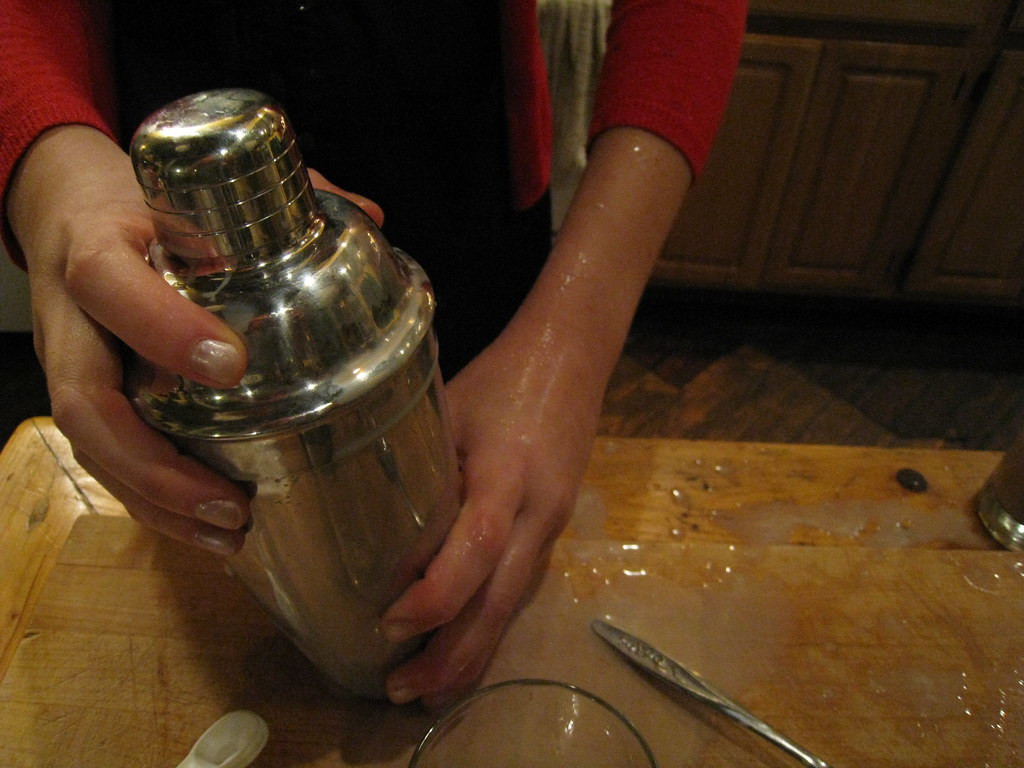 This was one of several ill-fated stabs at making Lite Nog. But after a night of experimenting with different thickening methods, combinations of Bourbon, rum and rye, and relentless spilling, we finally nailed the perfect formula. It was thick and flavorful, with a frothy head that recalled the soft peaks of beaten egg whites traditionally topping the drink. Yet it had no eggs nor heavy cream. I’m a little hesitant about telling this sensible audience the recipe. Because it involved a little chemical called xanthan gum.

I kind of wanted this to fail. All along, I could hear little voices saying, “Molecular science and mixology don’t mix!” Cocktail purists will pooh-pooh this to no end, I’m sure, and I’m bracing for the backlash (please be nice!). I watched the top dog cocktail expert David Wondrich make a batch of Tom & Jerrys (a winter cocktail very similar to eggnog) and serve it in a traditional metal punch bowl last year. He would not be very pleased. Neither would Alton Brown, who shared his eggnog recipe on NPR here, as well as the follies that most people make when giving homemade eggnog a go. 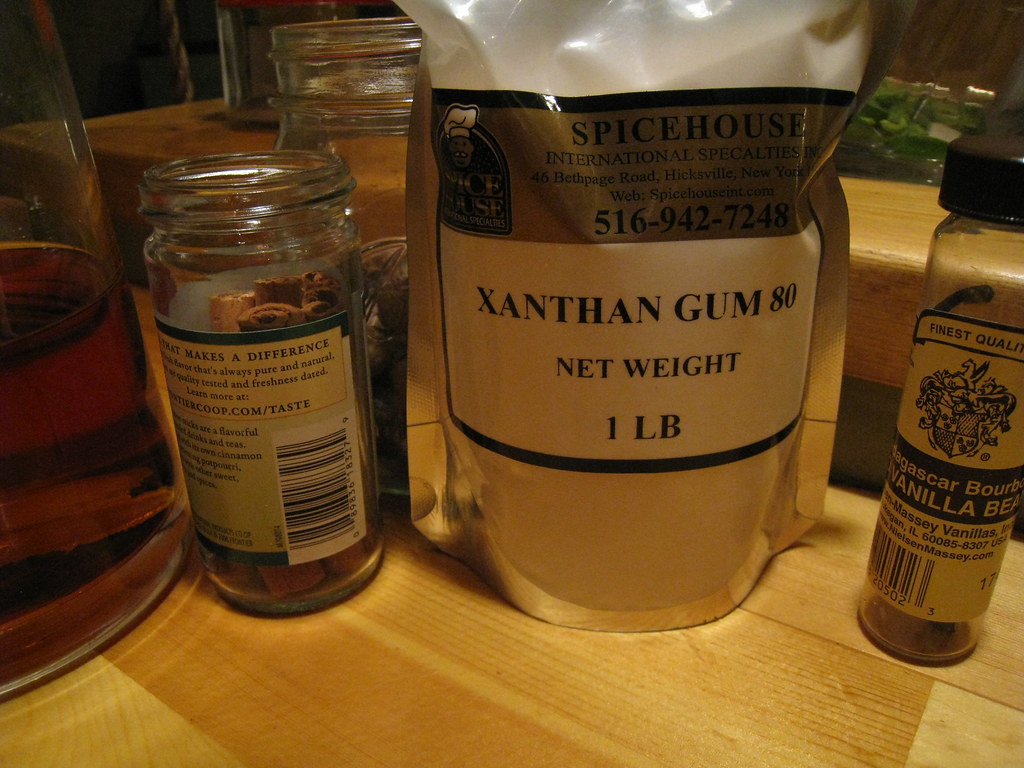 the chemical additive that could: xantham gum 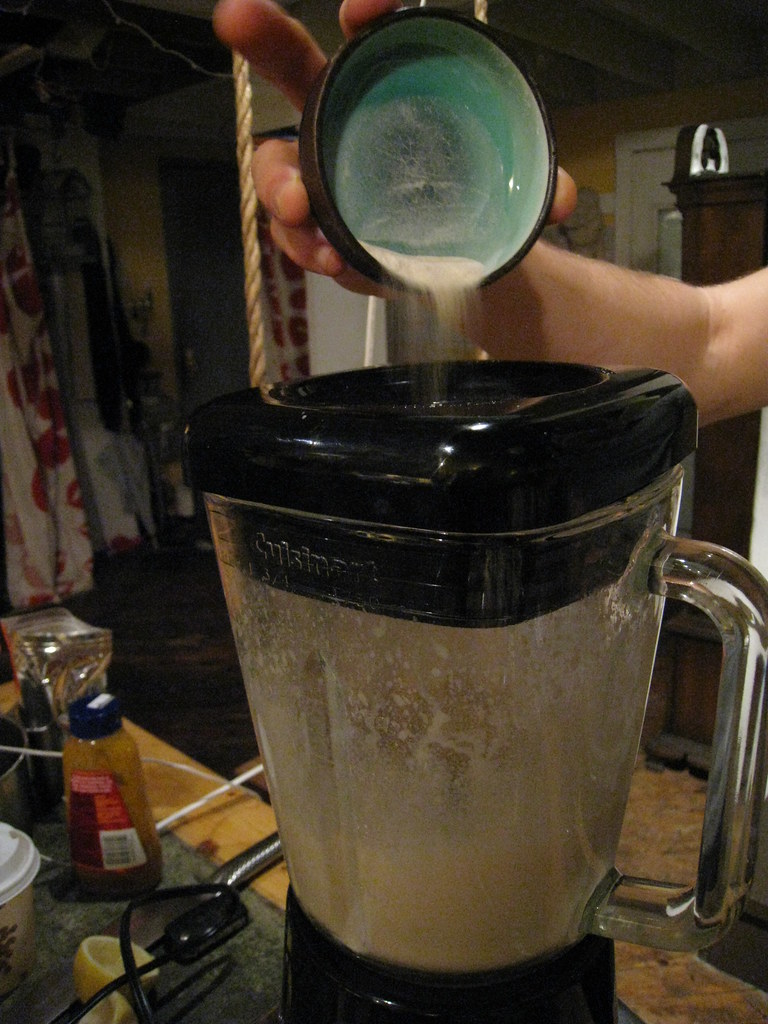 shearing the substance into the sweetened milk

Granted, adding a bit of egg white froth on top of the drink would not have been terribly fattening, and hence cause to go to such chemically-enhanced extremes. But I sense that since eggnog, after all, is a popular party drink, many folks at home wouldn’t want to bother with separating and whisking eggs in the midst of their merry-making. So I wanted to keep eggs out of the picture, and make a chilled, sweetened eggnog-like base that could be kept in the fridge and mixed with rum or whiskey at one’s own discretion. If you decide to get a pouch of xanthan gum, then this recipe is really very simple. But if you don’t want to bother with chemicals, you can always just chill the flavored milk and add it to your booze un-thick. It’s tasty stuff, if noticeably “lite.” 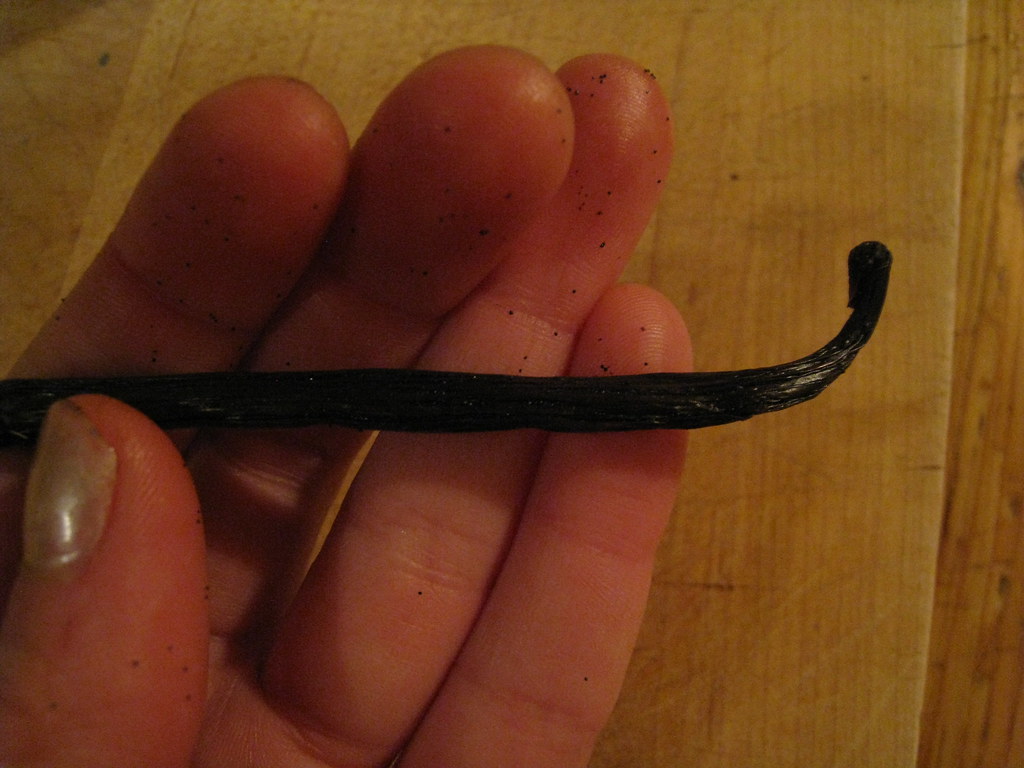 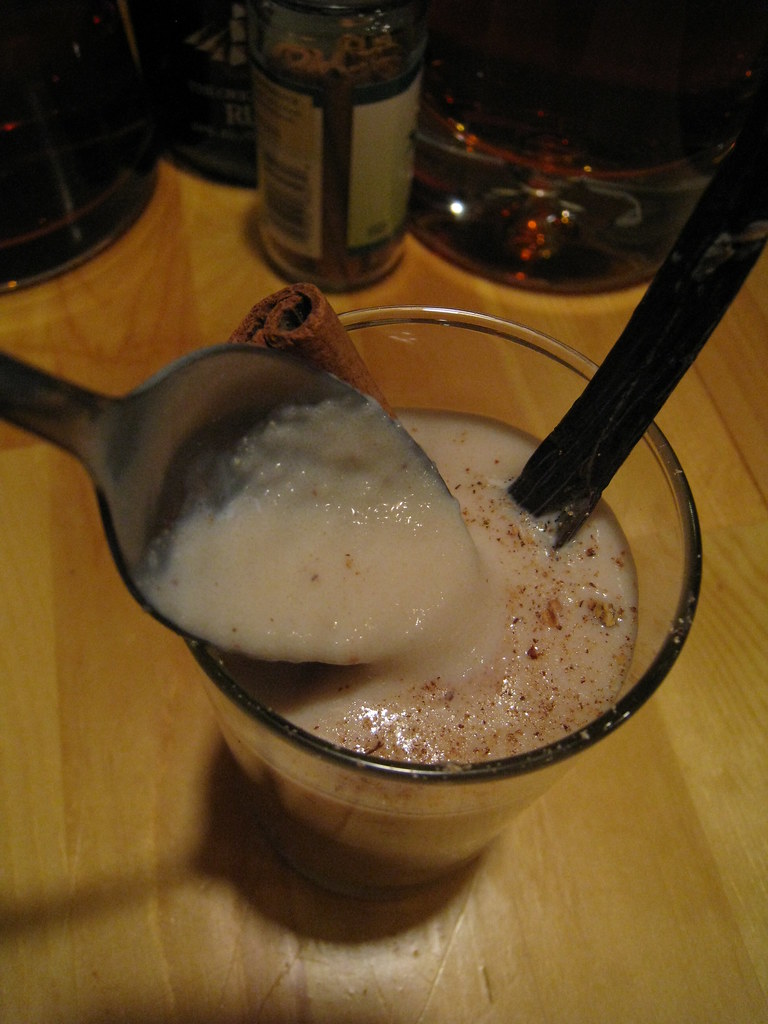 way too thick: a botched batch

What we came up with in the the recipe below is the third, and my favorite, version with xanthan gum. The other ones were consumed, but I wouldn’t recommend it. At first, we sheared the thickening agent into the drink once it had been fully mixed. When we decided the drink wasn’t thick enough (barely the consistency of half-and-half), we went ahead and added more xanthan gum, resulting in a chunky, slimy, goopy mess that was not the least bit appetizing. For the next attempt, we poured the semi-cooled milk that I’d steeped with a split vanilla bean and cinnamon stick and sweetened into the blender alone. This was blended with 1% xantham gum. It produced a smooth, creamy and delicious flavored milk with a foamy head almost like a cappuccino’s. But unlike a cappuccino, it could remain like this cold. Once mixed with just Bourbon (which we all agreed was the best match for the eggnog spices of all three boozes), the ultimate Lite Nog was born.

My toast of this post goes: may your presupposed notions about chemical additives and molecular gastronomy broaden while your waistlines remain narrow. Cheers!

Pour milk into a saucepan. Split the vanilla bean lengthwise and scrape the “beans” into the milk. Add the pod to the milk along with the cinnamon stick and sugar and bring just to a boil, stirring to dissolve the sugar. Reduce heat to very low and steep for 25 minutes. Let cool completely, and chill.

Remove the vanilla bean pod and cinnamon stick and pour milk into a blender. While stirring on a medium to high setting, gradually add the xantham gum. Keep blending for five to ten seconds until the mixture is thickened and smooth. Divide Bourbon evenly among glasses and top with the milk mixture. Stir gently, and top with a sprinkle of nutmeg. Add a cinnamon stick for garnish if desired.

Four brownie points: The recipe’s raison d’etre. You get much less cholesterol in this recipe than you would with a classic eggnog, but you’ll still get calcium and confidence in the same glass. This drink is still very sweet, however, which makes it high in calories. Hey, one problem to solve at a time!

Five maple leaves: This one is tricky. The choice is all yours in how environmentally-friendly the elements of this drink are. Organic milk, from a local farm, or conventional milk, from hormone-treated cows. (I completely acknowledge the irony in seeking out all-natural, non-chemically enhanced ingredients for this drink when I’m adding a white powder called xanthan gum to it myself.) Bourbon is typically produced in Kentucky, so that requires a long truck haul (unless you live there), and probably none too efficient of one, at that. It’s worth trying out local craft whiskeys to see if one can become your favorite.