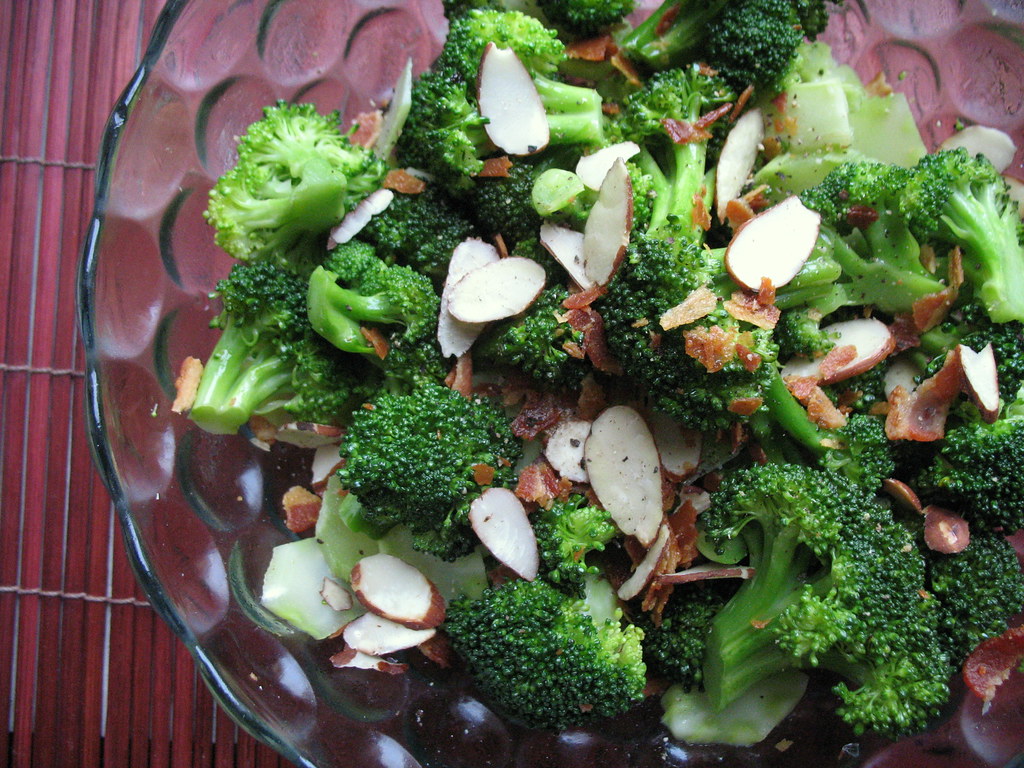 I’m sure I’m not the only one who has this tendency: to fall in love with a certain vegetable for about a week’s worth of nonstop eating at a time, then move onto the next affair. A few weeks ago this happened with beets. Afterward, it was sweet potatoes, roasted simply, with no salt and their skins intact. Now it’s broccoli. Not sure why. We’re old flames, though, a well-established on/off pair throughout the decades. We understand each other much more than with more novel, exciting veggies. (I had a bad date with celeriac once.) You know what I mean. It’s comfortable.


But unlike my recent exes (beets, sweet potatoes), broccoli is not terribly tasty on its own. I’ll eat it, steamed simply or better yet, sauteed with garlic and a splash of savory broth — but I’m sure it wouldn’t mind a little more help than that. This salad is a simple way of filling in some missing color while keeping additional ingredients to a very minimum. It’s delightful served warm, room temperature or cold, and its true measure greatly depends on the quality of those additions. For instance, I’d wanted to grab a lemon from the store to squeeze about for the final toss, but forgot to. Instead, I found myself appreciating the taste of some schmancy olive oil in my cupboard all the more. This, along with a few specks of sea salt and some freshly ground black pepper would already make steamed broccoli a worthy candidate for long-term commitment in my book. But to dress it up further with some smoky flavor (bacon!) and extra texture (sliced almonds), it’s a rekindled fling made in heaven. 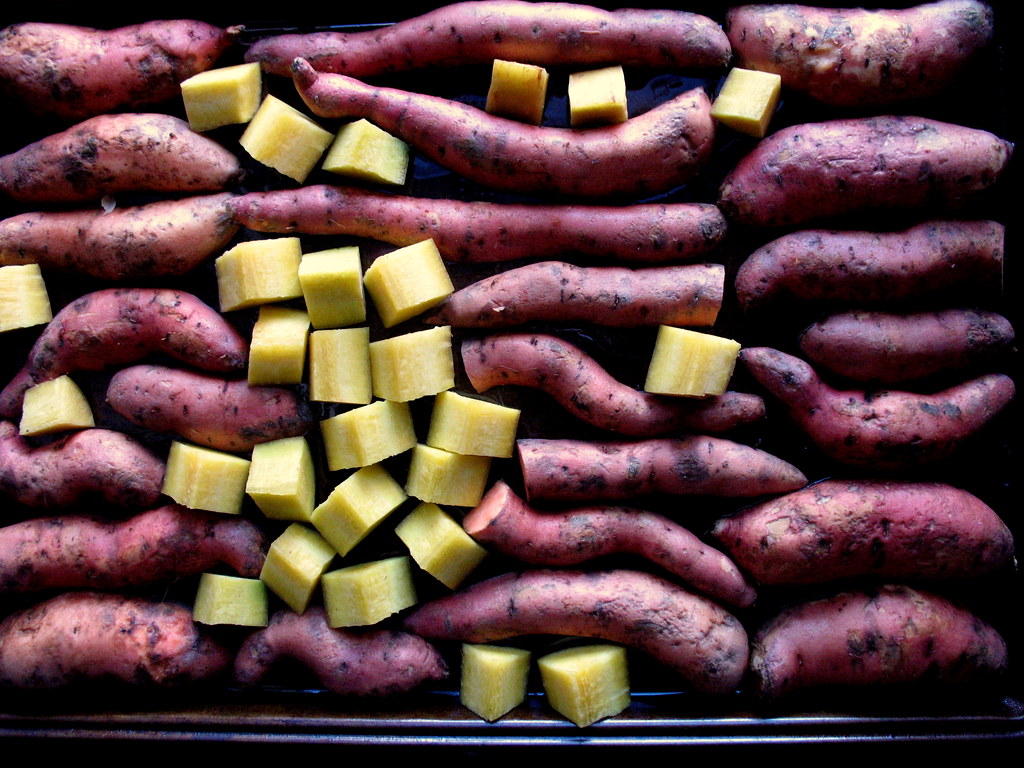 from my roasted sweet potato (and carrot) sweetheart week

I enjoy broccoli stems, stripped of its tough skin and sliced thinly on a bias, but if you don’t, there’s no need to include them, too. (I also thought the slices nicely paralleled the look of the sliced almonds.) If you’re a vegetarian, or otherwise bacon-averse, you might want to swap in crumbled blue cheese or shaved parmesan in its place; a pescatarian, perhaps sardines. A vegan, how about roasted red peppers or capers? I’m drumming up all the salty, tasty things I like here, but I’m sure you’re perfectly capable of doing that yourself. 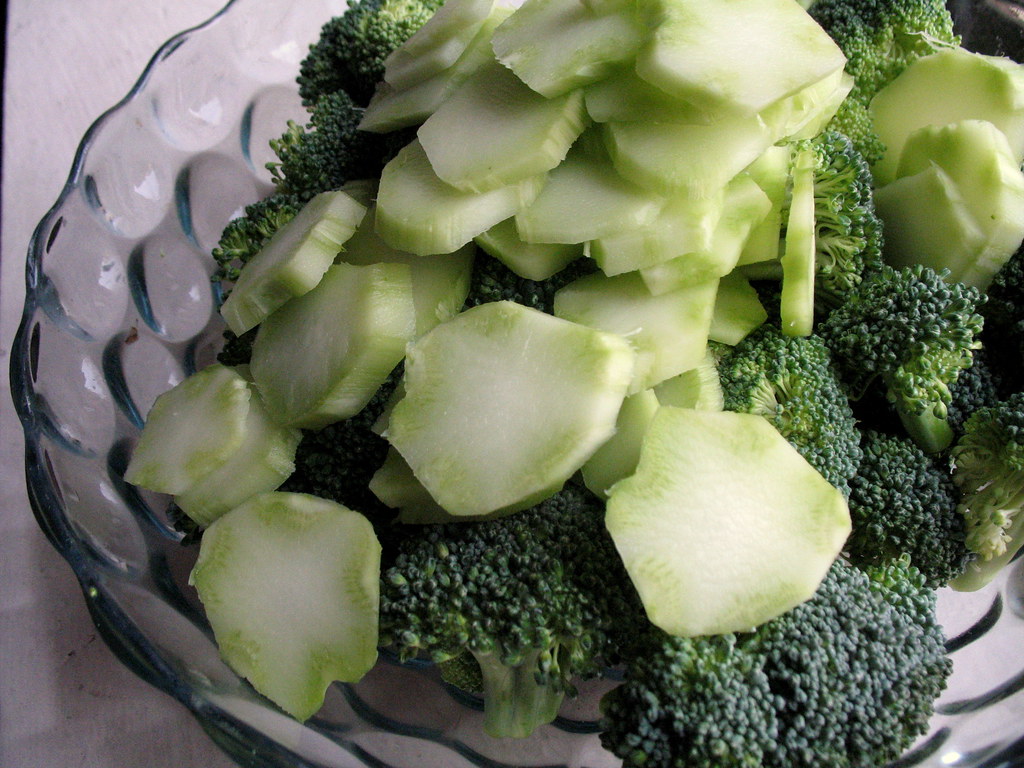 lightly steamed broccoli stems — so benign, what’s not to like?

Seasonality plays a crucial role in these produce passions. But unlike a CSA-spurned one, where I might have a bushel of [fill in the blank] to cook with for several days straight, it’s mostly by choice. (And this is one of the reasons why I haven’t joined a CSA yet — though it’s mostly because I live in a single-person household sort of far from potential membership-sharing friends, and too much food is too much food, no matter the sustainability it helps serve small farms.) As it happens, broccoli is on its last legs of the fall harvest, so this recipe is a bittersweet farewell for the season.

Maybe it’s time to give celeriac another chance?

Place broccoli in a steamer rack (or, as a substitute for one, a bowl that will fit inside a large, lidded pot with about a half-inch of water at the bottom of it). Steam for about 10 minutes or to desired tenderness. Let cool at least five minutes. Toss with the rest of the ingredients and serve immediately (to preserve the crispness of the bacon and almonds.)

Four brownie points: As if you haven’t been told since you were a toddler, broccoli is really good for you! Let me count the ways… first of all, it’s low in calories, a good start since we’re spoiling that with olive oil, nuts and bacon. Then, it has Vitamin K, Vitamin C (one cup = as much as an orange), iron, folate, fiber, B-vitamins, potassium, magnesium and zinc. (Perhaps I should have counted the nutrients it doesn’t have.) Best part, it also has calcium. Does a body good. Oh, and finely sliced almonds are a good way to get as much nutty crunch for your fat and caloric intake. Whoever created that impossibly thin-slicing industrial mechanism was either a genius at scrimping or a concerned fat-phobe for replacing whole almonds with such miniscule fractions — sounds like my kind of guy.

Six maple leaves: The star of this recipe, and about ninety percent of its mass, is broccoli. So getting it fresh from the Greenmarket is the way to go — it’s not trendy thus expensive, it’s never sold out by the end of the afternoon. It keeps in the fridge relatively long, longer than most densely vitamin-packed greens. The supporting players in the recipe are a little more troublesome: my bag of almonds were trucked here from I-can’t-be-certain-where, and the bacon was a non-organic, sad-little-piggy pack in my freezer that needed to be used up.