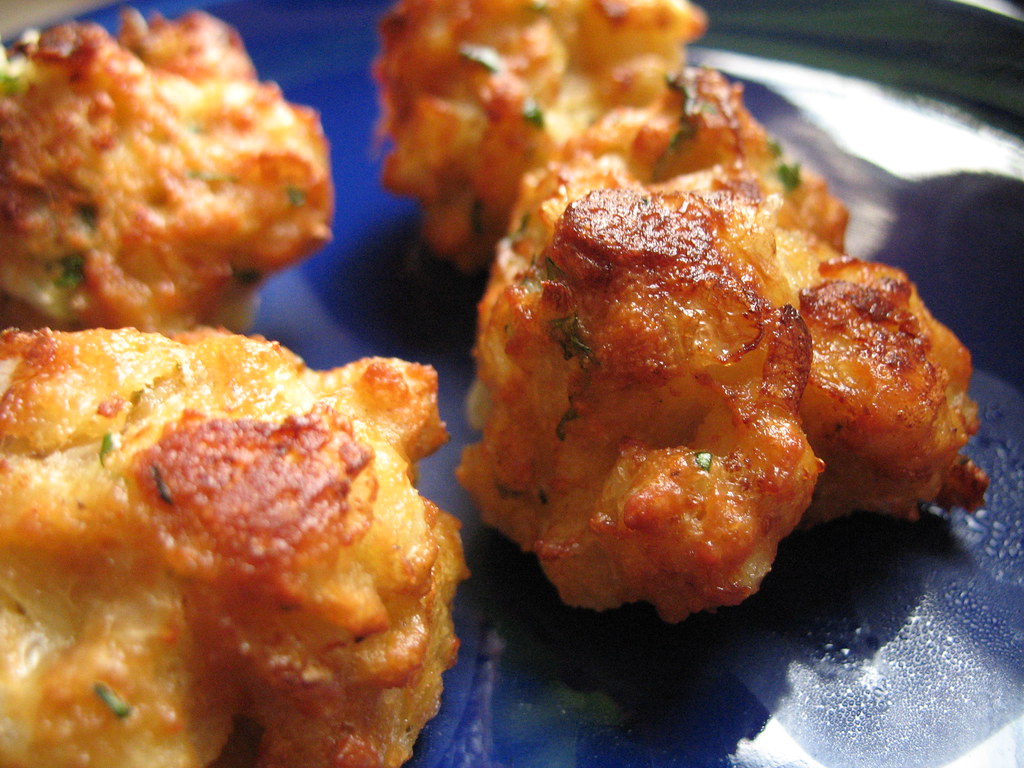 Cauliflower: it’s great pickled, it makes a delicious cream soup, and a prize-winning casserole. It’s tasty when stir-fried with Indian spices, near-invisible tossed into risottos, and it mixes amicably in salads, raw or lightly steamed. Is there anything you can’t do with this versatile veggie? Okay, so maybe we’re not on board with an ice cream flavor. But it’s no wonder that cauliflower has worn many hats, one notable one resulting in its nickname of “fauxtato.” Hence, I was tempted to name this recipe “Fauxtater Tots.”


Wintry and white (unless you opt for the bright purple, green or “cheddar” varieties), cauliflower are in season from July through November, making them a perfect fall food. In another interesting supposition of the English language, the edible head is often called the curds. So we’ve got dairy, flowers and potatoes as established metaphors for this member of the cabbage family. I’ll add to the gamut by likening a head of cauliflower to a crest of fresh snow. 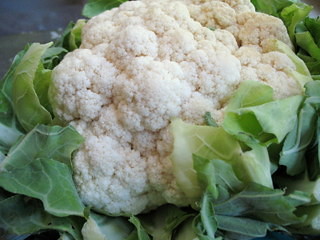 When I brought these cauliflower croquettes to a party as a cocktail snack, a friend popped one in his mouth and proclaimed: “It’s like a tater tot!” Perhaps it was the small, crisp-cooked bits of cauliflower throughout the morsels that resembled those little hunks of potato in the conventional frozen-and-fried versions of the tater tots I’ve had plenty of in my time. I agreed, and almost wished I’d brought some ketchup along. I probably killed the low-carb virtue of the cauliflower-as-potato-replacement by adding a good portion of breadcrumbs to the croquettes. It’s not exactly a health food, this recipe, with eggs to bind the balls together and a deep-fried preparation. But cauliflower certainly brings plenty of nutrients to the table, which might not readily be assumed due to its bland color. 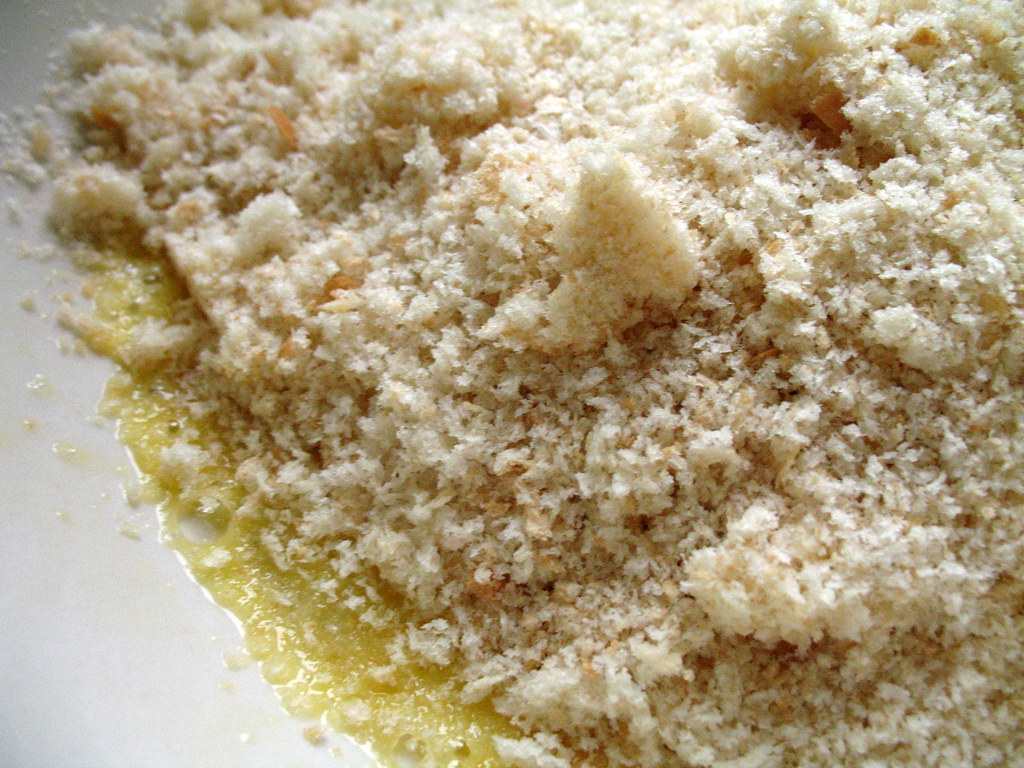 egg and breadcrumbs combine for a crispy base

I found that I didn’t really need to submerge these cauliflower balls completely in hot oil to produce the deep-fried effect. First, I didn’t have enough vegetable oil to go around for this. After frying them halfway submerged in hot oil, I flipped them once to fry another couple minutes on their opposite sides. This seemed to do the trick just fine. 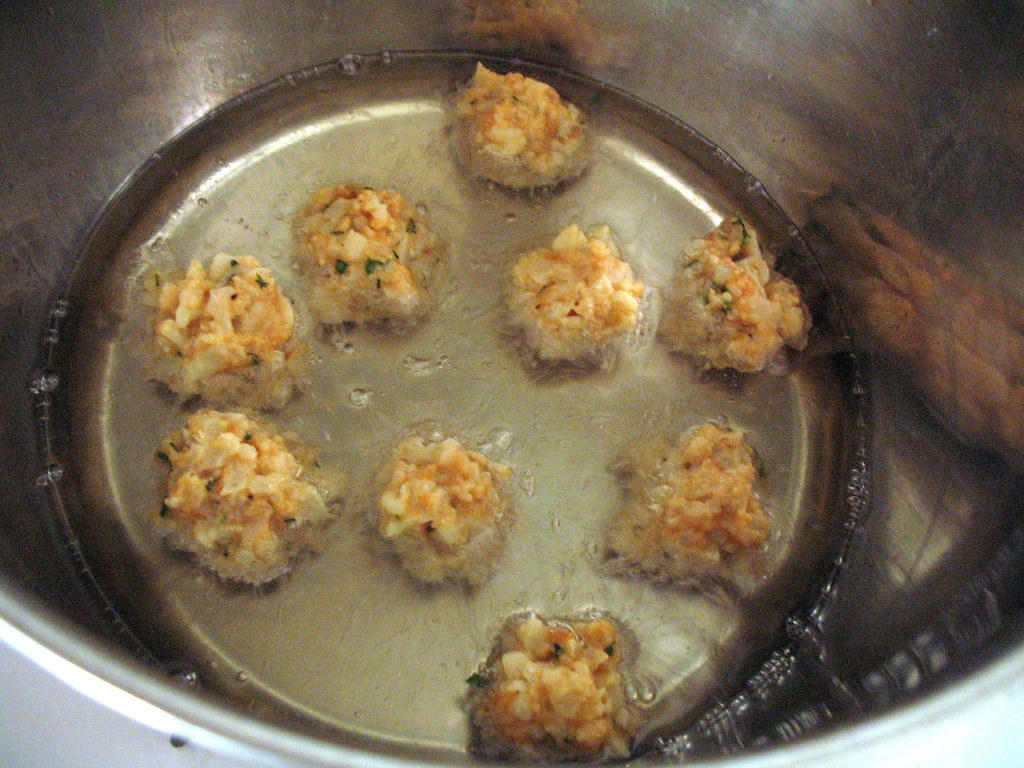 A simple snack to bring to those upcoming holiday parties, or a comforting breakfast side. Either way, they’re delightful, and I’ll probably make them again sometime soon, as many different seasoning combinations (curry?) and dipping sauces seem apt for the playing field. Try any of your own.

In a large bowl, beat the eggs and milk and add the salt, peppers and chives. Fold in the breadcrumbs and let soak for 5-10 minutes. Fold in the cauliflower and stir to combine evenly. Form into about two-inch balls. Prepare a drying rack lined with paper towels.

Heat the oil in a saucepan so that the level of oil reaches at least half the height of your croquettes. Once it begins to sizzle, carefully add the croquettes, spaced at least one inch from another (you’ll probably need to work in batches). Cook for about 2-3 minutes on one side (check underneath at 2 minutes to see if the bottom side is golden brown), then flip individually using tongs or a spoon. Cook on opposite side until golden brown. Remove croquettes with a slotted spoon and let cool on paper towels. Sprinkle with additional salt if desired, and serve with optional lime aioli (recipe below).

Whisk together the mashed garlic, egg yolk and lime juice in a bowl. While whisking rapidly, very slowly pour in a drop of the oil. Continue adding oil very gradually while whisking rapidly until the mixture is emulsified and thickened. Taste and add salt as desired.

Cost Calculator
(for about 12 croquettes)

Seven brownie points: Served with the lime aioli, this is a greasy, crispy snack worthy of comparisons with tater tots. It’s relatively low on cholesterol and carbohydrates, though, making it stand apart from other savory hors d’oeuvres. Plus, the cauliflower provides fiber, folate and Vitamin C, no matter which color it may be, and studies have suggested it may reduce the growth of tumors and prostate cancer.

Seven maple leaves: Using up days-old bread — admittedly, the main motivation for this entire dish — is always a fun way to experiment in the kitchen rather than let food go to waste. The cauliflower, egg, milk and come to think of it, chives, were purchased from local sources. The only negative is the lime and olive oil for the aioli dipping sauce — that is, if you haven’t been convinced that ketchup’s the best answer instead.