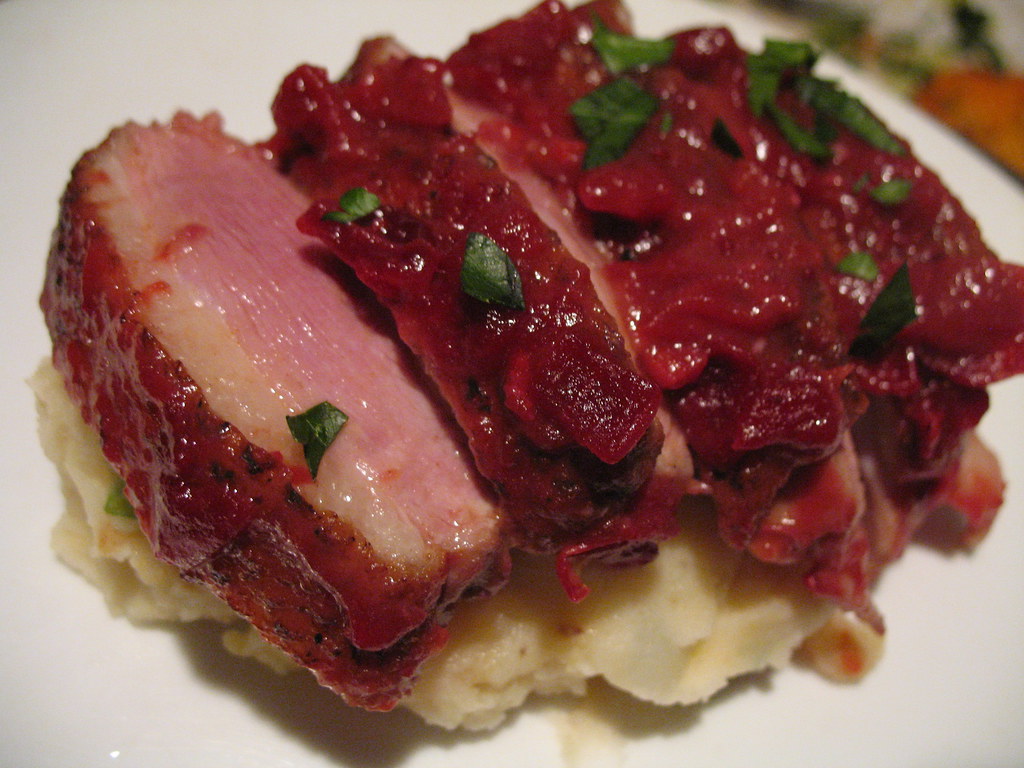 The culinary concept of “Asian fusion” is one that both excites and troubles me. It’s sparsely defined (there is no Wikipedia entry for it), and it sometimes can mean a melding of different Asian cuisines, or a hybrid of East-West tastes. Understood in the latter sense, I find that I really do enjoy so many of these types of dishes. I’m not saying that I have a better perspective of it than anyone else, but since Asian fusion is also a good way to describe my genetic make-up (and my once fake DJ name to co-workers), it occurs to me that a great deal of the foods I grew up to love might also be described as such. Fried rice with cubed leftover ham steak? Absolutely. Anything with sesame oil, especially cold salads? Have fork, will eat! The problem comes when fusion dishes are commonly mistaken for the actual cuisine(s) of inspiration. Like with “Chinese Chicken Salad,” a popular favorite (and one which I don’t happen to like — canned oranges?). Often, it seems all too careless and facile to slip soy sauce into something and call it “Asian” this or that.

The way I prefer fusion food — of any cultures, for that matter — is a little more knowing than that. I like dishes that are so obviously not faithful to any cuisine, but rather tongue-in-cheek nods to them. Or whimsical hyperboles from the chef’s worldly imagination.


And that’s the genre I’ll place this delicious duck breast in. Weird, but delicious. It’s slicked with a Thai red curry-spiced cranberry sauce, and served on a bed of coconut milk-infused mashed potatoes (instead of Thai rice). Duck breasts, prepared juicy and rare, are a darling of gourmet restaurants that I’ll guess haven’t been as much embraced by home kitchens. I hadn’t cooked it before this, and most of my cook-at-home-happy friends haven’t, either. So I was thrilled for the opportunity to demonstrate this with a whole duckling from D’Artagnan. Nor I could I resist conjuring Dickens-ish comparisons to a fattened Christmas goose. This is a holiday meal — impressive, luxurious, and crimson as a holly berry. 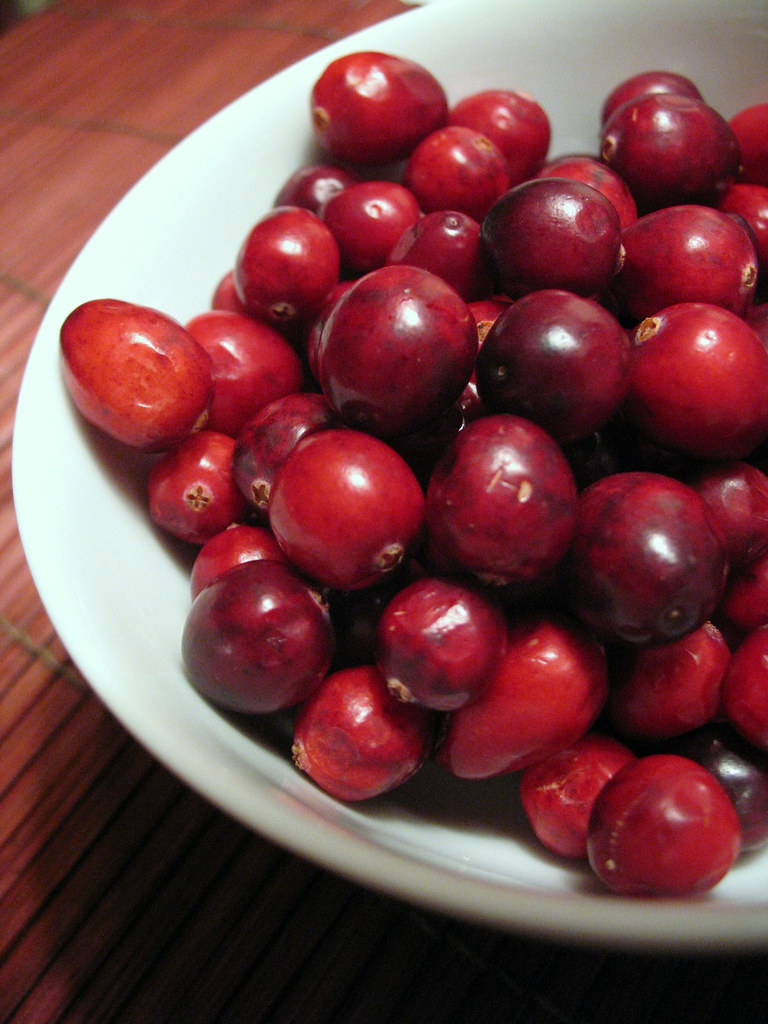 Sweet and sour: two of the four key flavors in Thai cuisine, and two which can be largely killed with the same pebble-sized stone, the cranberry. Or so I thought when I initially set forth on making the dish. Admittedly more sour than sweet, these bright morsels of winter seasonal spirit practically melt when introduced to heat, resulting in a pulpy, marginally sweet red syrup. Unlike citrus, a common player in Thai curries, their sourness has a more earthy, berry-like bite — try tearing into one raw and tell me you’re not reminded of a red Sour Patch Kid. In any case, I had to kick up the sweetness in this glaze with a good dose of sugar in the raw. 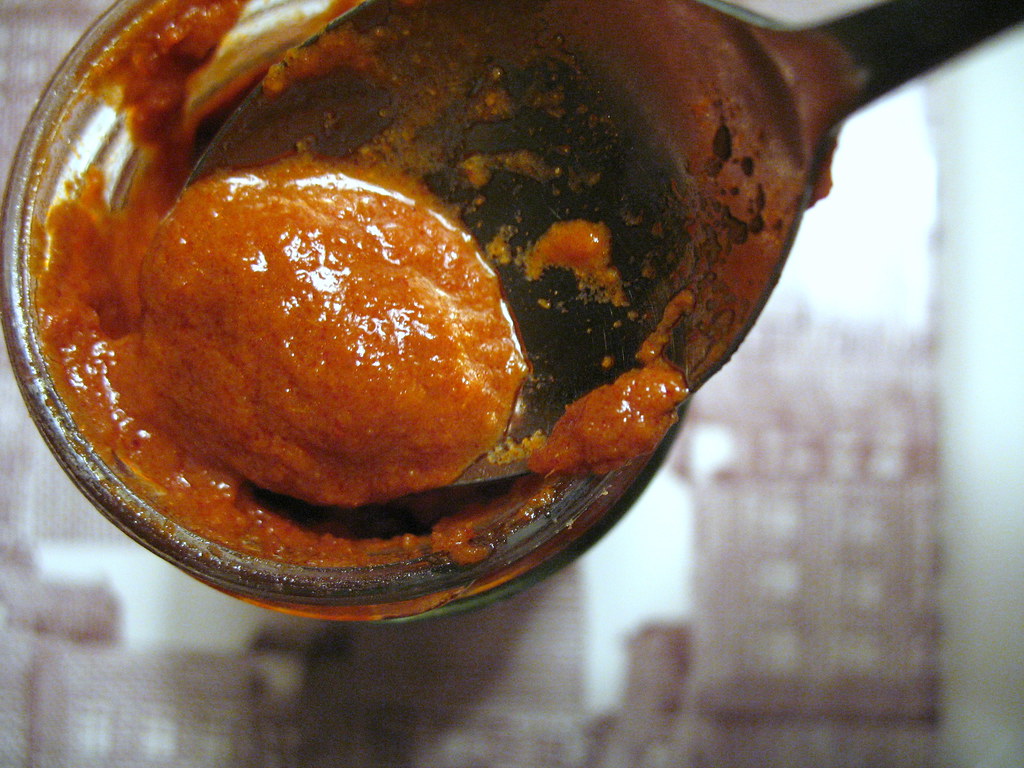 a spoonful of red curry paste eases the job

For the other two flavors commonly found in Thai curries — salty and spicy — there’s the pungent fish sauce and ground red chiles. But that’s only just the beginning of building a virtuous Thai curry. So rather than over-exert yourself this season with collecting all the spices, I might recommend a bottle of red Thai curry paste. A few teaspoons of a cheap brand of one I found at a non-Asian supermarket was satisfactory for this task. I might try out other types once this jar is through.

With those bloody-rare looks, one might wonder how to cook a duck breast. Treat it more or less like a chicken breast? Or sear it like a steak? I’ll side more with the latter, that is, as long as you enjoy rare game meats. I gave my duck breasts a good sear in oil on its skin, then slathered the sauce over them while they continued cooking in the oven. Since I was working with a whole duckling, too, there was some delicate legwork separating the breasts from the carcass. Basically, you’ll want to have a good, sharp knife to flick away at the connective tissue between the ribcage and the breast meat. Feel the bird for all sorts of natural joints and connectives, and keep in mind that the final breast should be shaped more or less like a chicken’s. 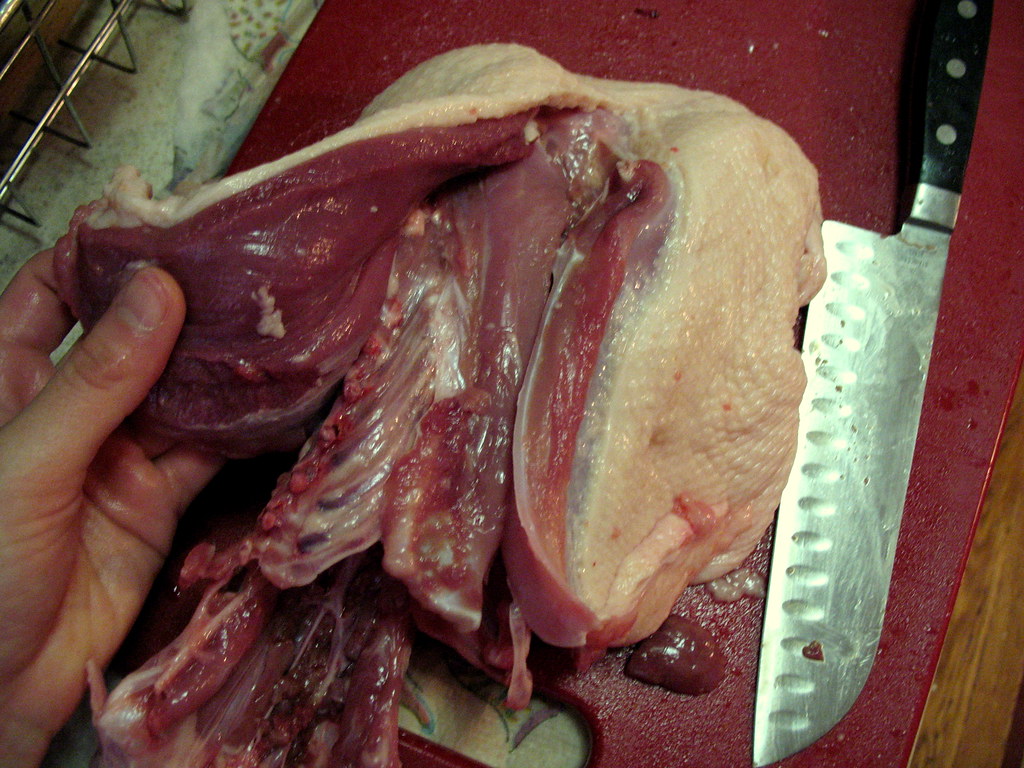 separating the duck breast from the bone

Finally, I prepared some mashed potatoes just like Mom and Dad used to make it — only with coconut milk instead of regular milk and butter. Coconut milk is naturally creamy and rich, so I didn’t see the need to boost the fat with any butter. For texture and a reinforcement of that coconutty flavor, I added some toasted coconut shreds to the mixture. Toss it in or leave it out as you will. 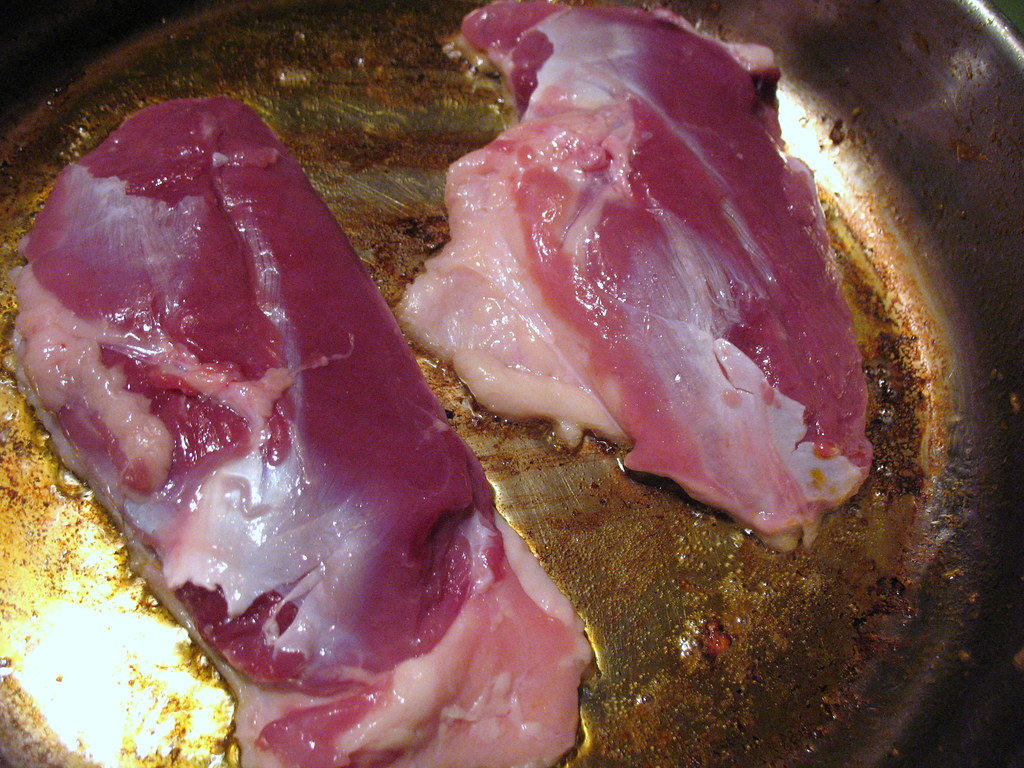 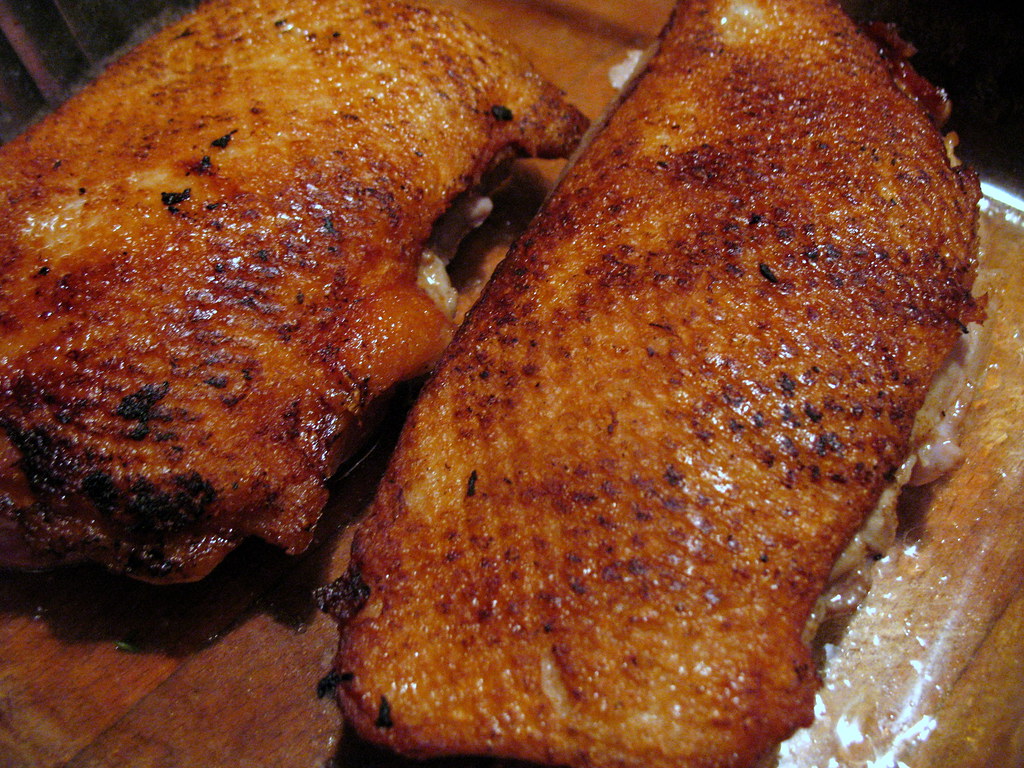 the browned breasts, pre-saucing and roasting

These were the breasts of a whole D’Artagnan Pekin duck, the most common breed of ducks for meat and egg production in the country. They account for some 95% of duck meat, and are regarded as milder in flavor than other breeds such as the Muscovy or Magret. If the name “Pekin” rings a bell, yes, these ducks were bred from Chinese Mallards before making their way to Long Island. No idea why the “G” was dropped from “Peking,” as in the most famous Beijing duck delicacy.

So it seems our Asian fusion story has met with various twists in this dish: a duck originally from China but bred in the West is raised on a small farm in Indiana, and served Thai fusion-style by a girl who can’t seem to get A Christmas Carol out of her head to a room full of Brooklynite friends at a fake Thanksgiving feast. I’m not sure where that leads us exactly, but, uh, happy holidays.

And don’t forget: Order anything from D’Artagnan and receive a 10% discount for the rest of the year (until 12/31/08), just for reading this blog! The small farm and sustainability-oriented fine meat purveyor has kindly extended this offer so you can replicate these dishes or invent your own, all through the holidays. Enter the promo code NEOINY2008 at checkout. Thanks, D’Artagnan!

In a saucepan, sweat the onions in one tablespoon of the oil until softened, 6-8 minutes. Add the garlic, ginger and cranberries and cook, stirring, until berries have mostly broken down, about 4 minutes. Add the curry paste, sugar, fish sauce and salt and continue cooking another 2-3 minutes. Taste for seasoning, adjusting as desired. Remove sauce from heat and set aside.

Meanwhile, boil potatoes in a large pot until tender. Drain water. Mash potatoes and stir in the coconut milk and optional shredded coconut. Season with salt to taste.

Preheat oven to 350 degrees. Heat oil over high in a skillet. Once oil is hot, place duck breasts skin side-down in the pan and reduce heat slightly. Cook for about 5 minutes, or until skin is golden brown. Transfer duck breasts to a roasting pan skin side-up. Spread the cranberry sauce on top of the breasts and underneath. Bake for about 10 minutes. Let cool from oven a few minutes before slicing the breast and arranging on top of a serving plate with the mashed potatoes. Spoon any remaining sauce over the top if desired.


Eight brownie points: Anyone want some extra duck fat? I’m serious, here. Granted, if you purchase duck breasts separately, rather than a whole duckling like I did, you won’t have to dig through blubber at all. Lucky you. Duck fat is actually a prized gem to chefs. I guess I’m just not there yet, and have little desire to cook with it as of now. The bottom line here, is that duck is a very fatty meat. Yes, they have down to keep them warm, but the true warmth for these creatures lies beneath its skin: cholesterol padding. True, cranberries help counter that cholesterol with its impressive amount of antioxidants including lycopene, and have been known to reduce “bad cholesterol.” Then we get to the coconut milk, not the friendliest in terms of saturated fats (actually, one of the worst culprits out there), and is one of the plant-based fats known to raise cholesterol rather than balance out the “bad fats.” However, research is still in the works to determine to what extents coconut increases or counters cholesterol, as it’s a staple to Thai and other relatively heart-healthy cuisines.


Six brownie points: As with all of D’Artagnan’s meats, I’m assured that the Pekin duck lived a healthy life under farmers who care about the land and their livestock. Cranberries and potatoes are seasonal produce widely available in farmers’ markets this time of year. The other ingredients — spices, coconut milk, etc. — play smaller roles in the dish, and there are surprisingly few of them for a dish so seemingly elaborate.