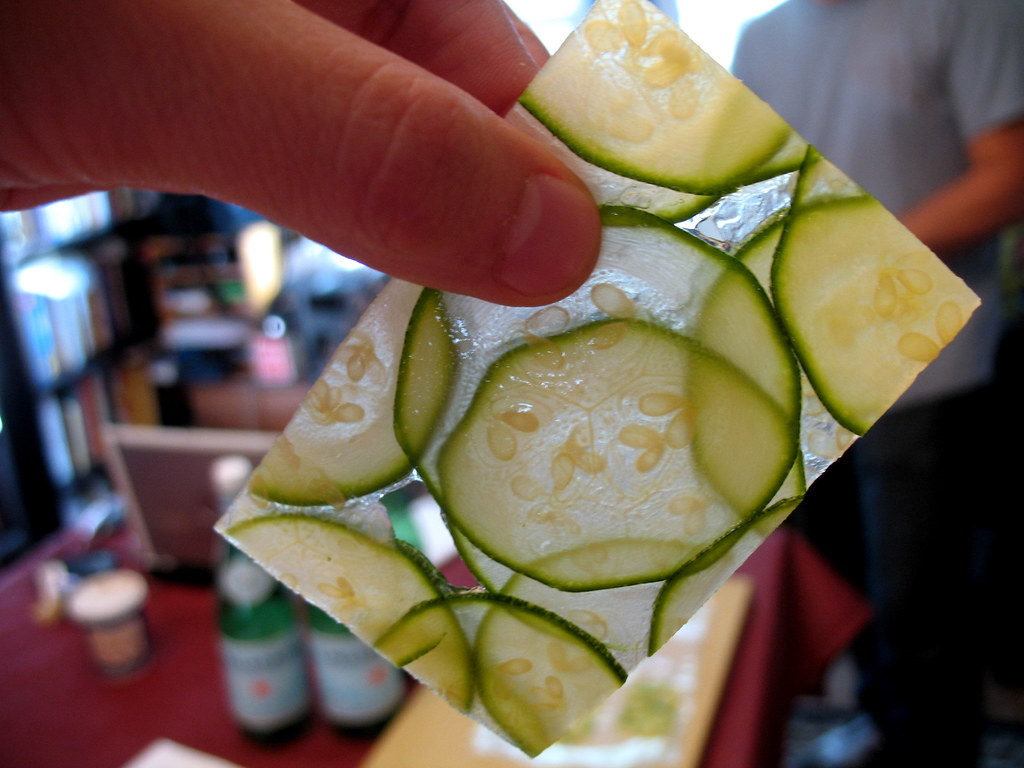 Isn’t that term just scary? Doesn’t it make all you wholesome, organic, farm-to-table types just squirm? Indeed, “food science” used to be a derogatory way of describing the process by which overly processed foods are hatched in labs. Michael Pollan may have made a mockery of the industrial food industry’s overuse of it in The Omnivore’s Dilemma, but like it or not, molecular gastronomy is everywhere right now. After being embraced by chefs like Wylie Dufresne, among many others, these studies have even trickled down to curious home cooks. One good example, and good way to roll up one’s sleeves in the craft, are the workshops led by the husband-and-wife written website Ideas in Food.

Last Thursday I indoctrinated myself to this fabulous world of fantastical cooking by attending a six-hour food science class in the home of Alex Talbot and Aki Kamozawa of Ideas in Food. Along with me for the ride were cooking pals Mark, Michael, Daniel and Andrew. Our particular class was centered around the hydrocolloids pectin and methocellulose. These gelling agents provide various ways of binding foods together, making them pliable, or otherwise changing their textures. The one we began with might sound familiar, pectin. Often used to jam and jelly mashed-up fruits, pectin is a naturally derived substance that we added to chocolate to create Alex and Aki’s recipe for “Sliced Chocolate.” We also stuck together a stack of melons with it, bound sliced zucchini into a thin sheet of attached snowflake-like circles, and made “lentils” out of droplets of hoisin sauce. Pectin: nature’s “Fruit Glue,” as Alex and Aki coin a technique of theirs. 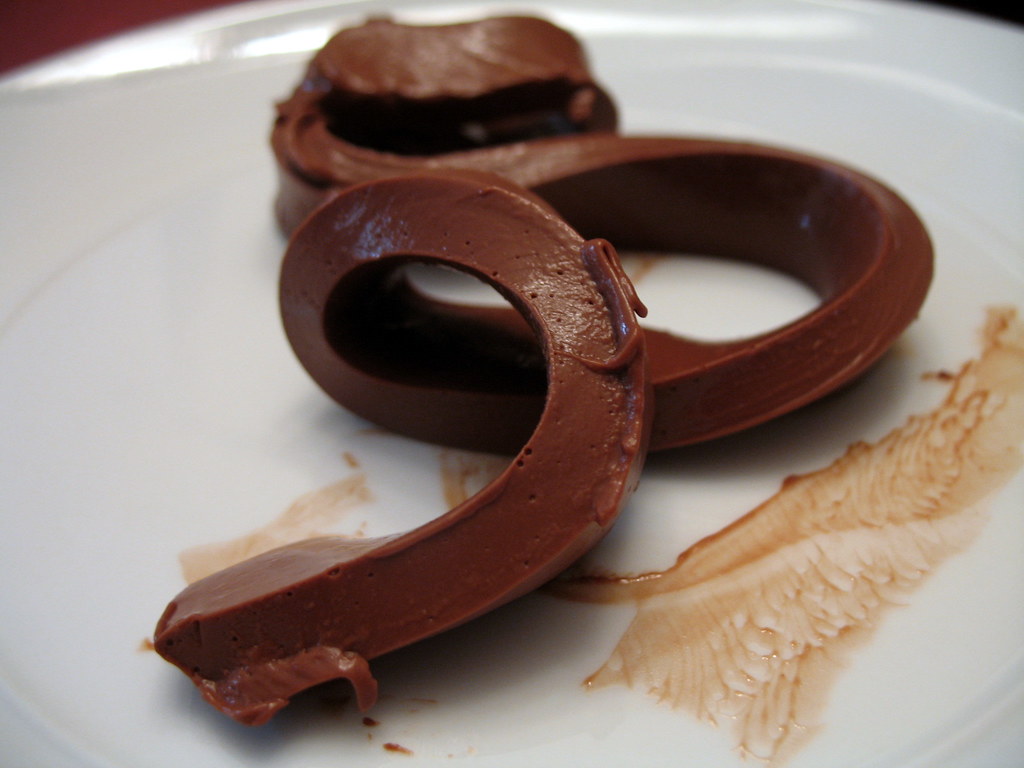 a pliable ribbon of soft chocolate 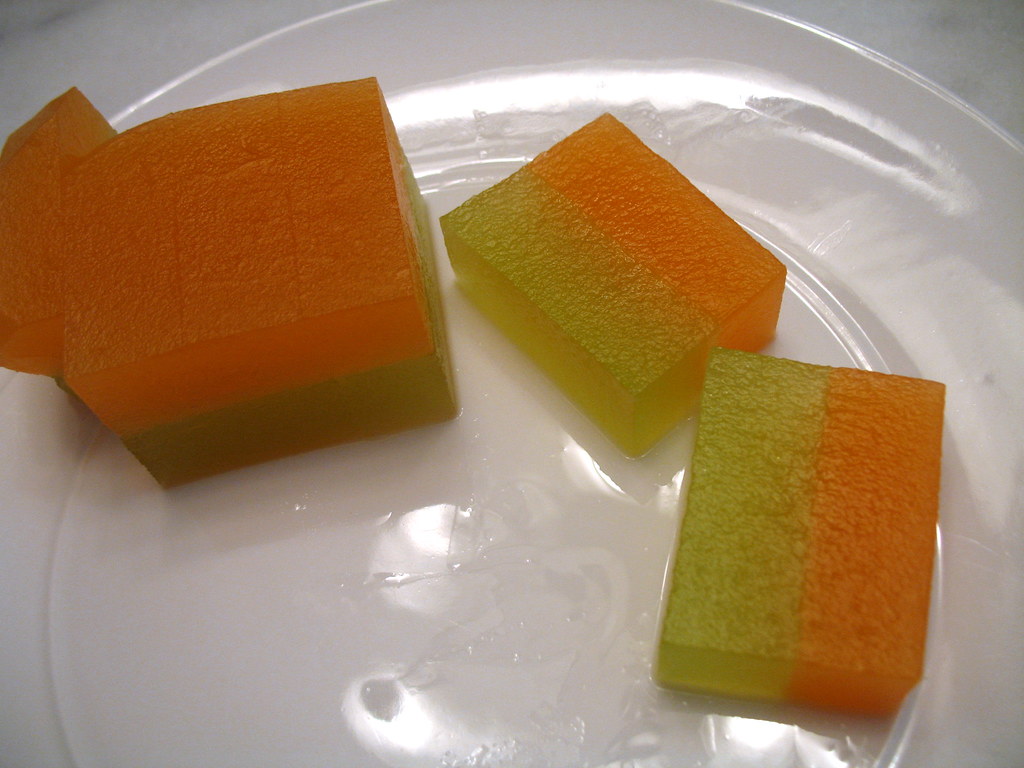 honeydew and cantaloupe, “glued” with pectin 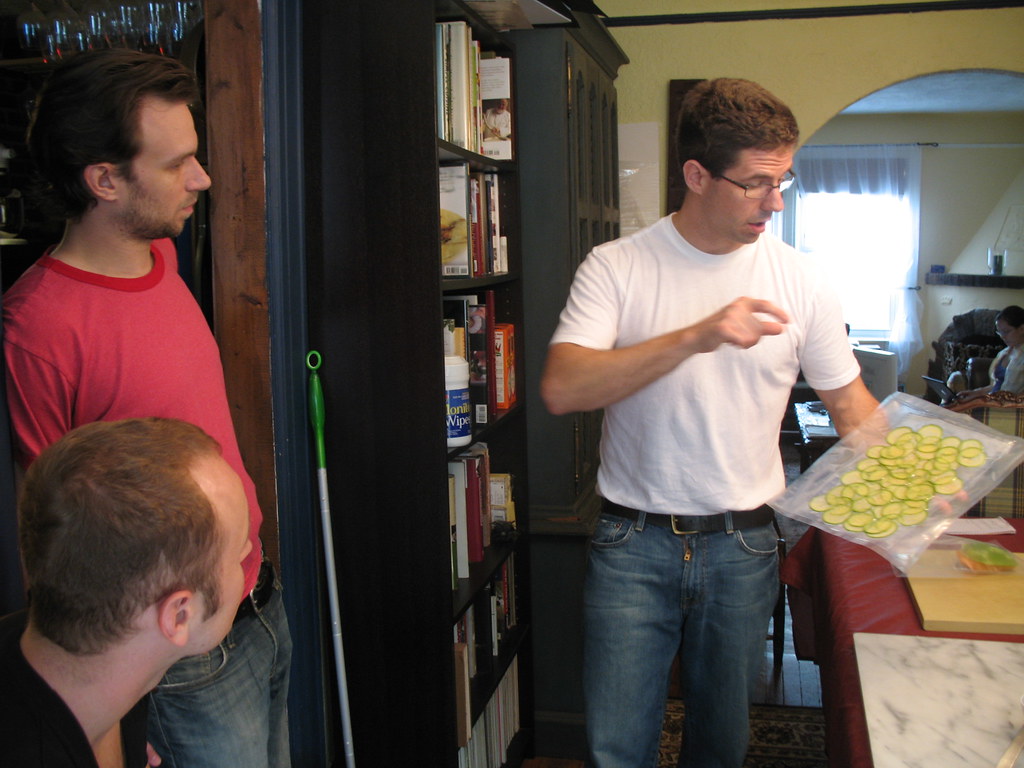 the zucchini slices are pre-compressed and vacuum-sealed 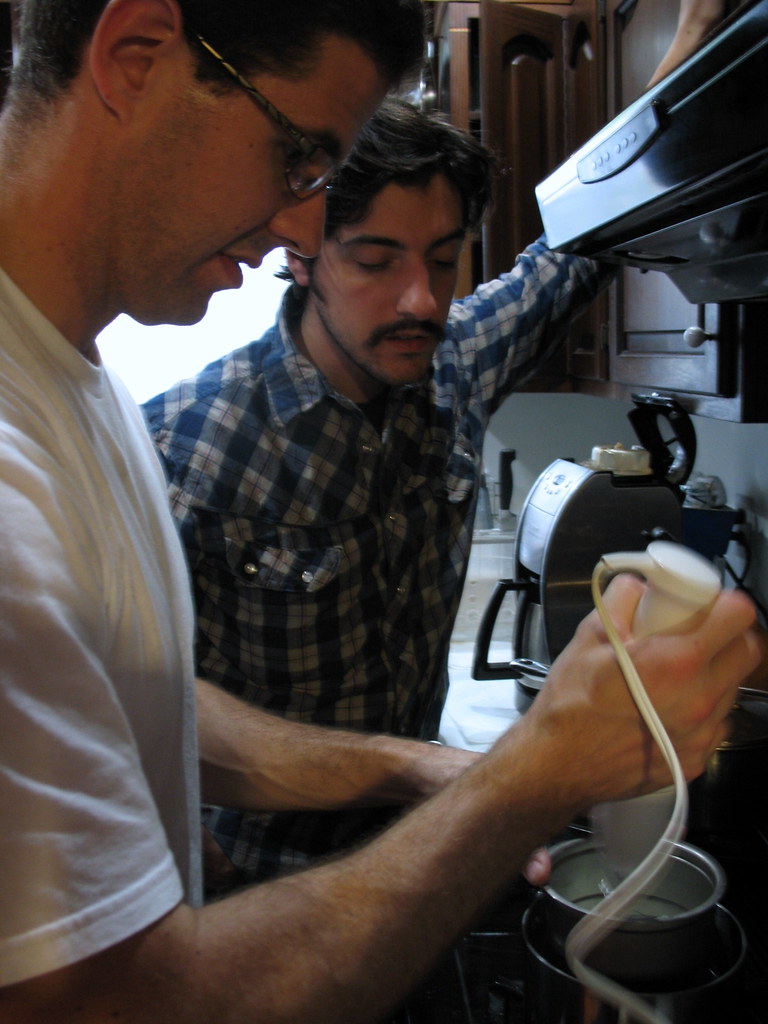 But it’s not as simple as I may have made all this sound. Alex and Aki spent many grueling months and in some cases even years figuring out just how to achieve the effects they wanted to out of the ingredients. In other cases, a surprise turn-out became the creation of something else. I was in awe listening to stories of their various trials, errors and triumphs. Both chefs originally, Alex and Aki first began experimenting with food on their own, and started a blog about it. They started holding small cooking courses, and added food science to the curriculum. Once the food science classes started filling up and the other ones dwindled in attendees, they went straight food science, and now give by-arrangement individual or group workshops. (Alex mostly did the teaching for ours, since Aki is currently carrying their first child.)

As testament to its being a constant learning process, toward the end of the class Alex presented thin sheets of dried black squid and squid ink paper. He tried deep-frying them up as thick, hefty chips that turned out sort of the texture of Munchos, only much too rigid and dense to be very satisfying. Michael suggested running the dried pieces through a food processor first, and once fried, the bits were delightful little cracklins’ of squid — a great garnish. 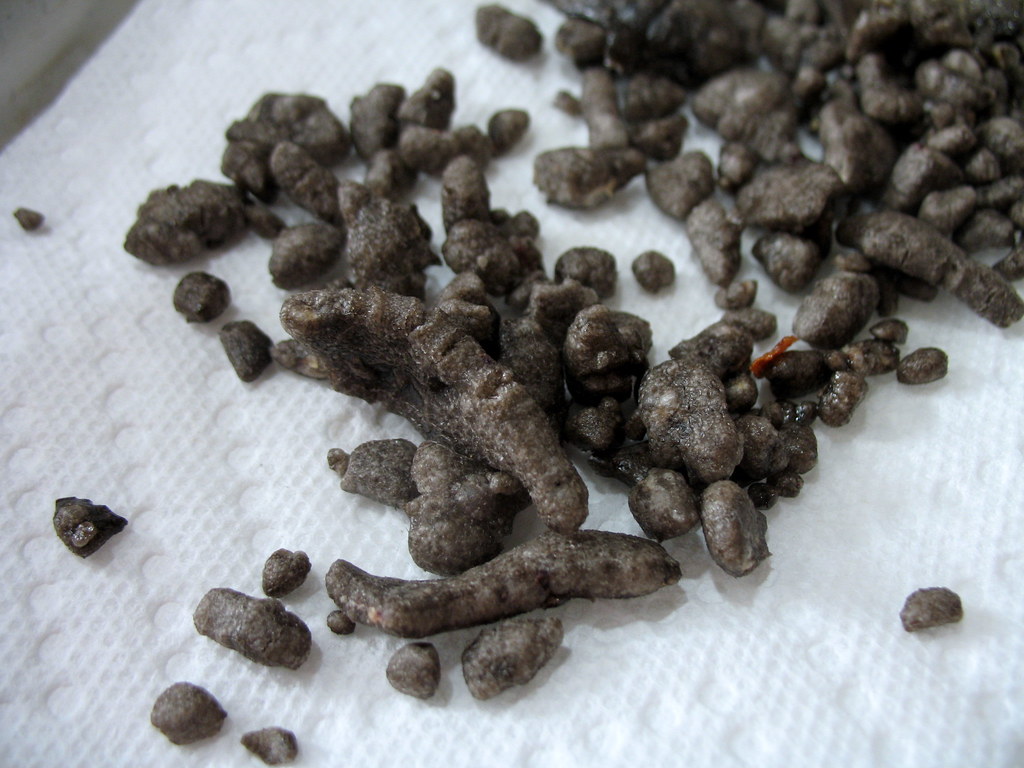 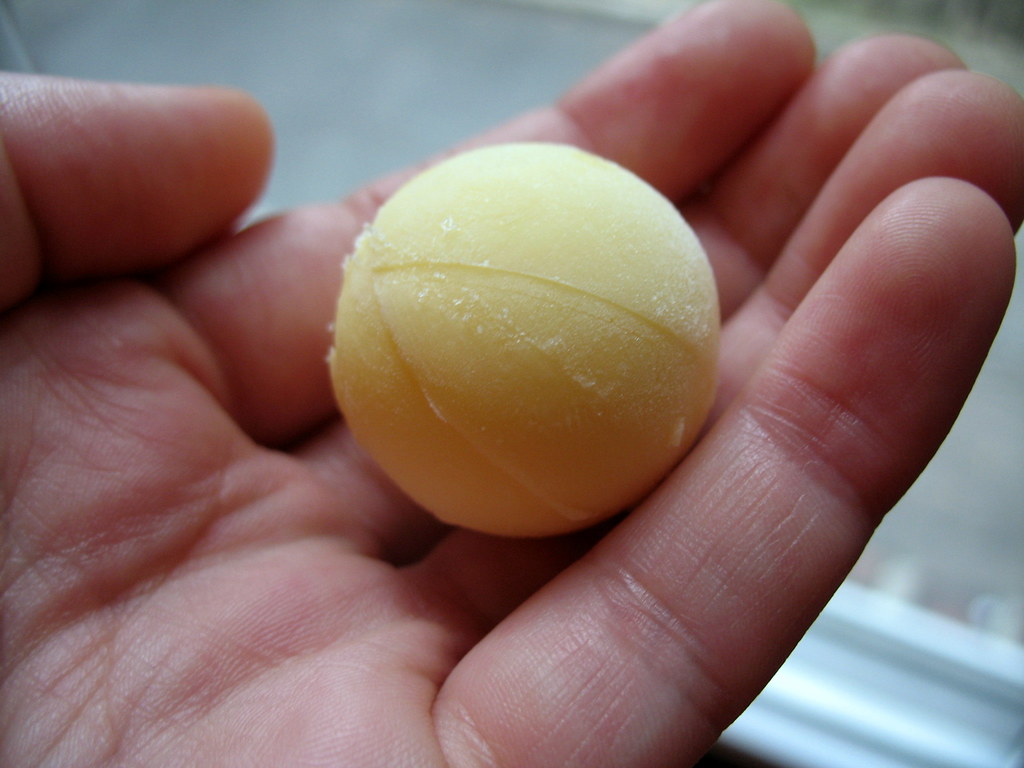 With all the close attention to exact measurements and chemical reactions, food science might sound like a rigid field of discourse, and it is. (The group of us now have a running joke where if we do anything slightly off-base in the kitchen, “Alex would not be happy.”) This was a definite crash course for me, and the guys had all taken one other class with Ideas in Food before. I’m not sure how much of everything I was taught I was able to grasp, but the pie victory sure was sweet compensation.

So I decided to boil down my observations (oh sorry, does that sound archaic? How about sous-vide?) into four somewhat random arguments for food science. I hope everyone can relate to them at home.

Cooking is all about ratios.

Your genius intuition did not just create that gorgeous Mailliard crust on that steak; it was the exact ratio of heat to sugars. When Alex said this edict at the beginning of the class, followed by “it’s not creativity,” I felt myself gasp a little. Then I realized exactly what he was saying: once you understand ratios correctly, then you can be creative by manipulating them.

It might not sound as earth-shattering to some, but re-thinking cooking as something not creative, whatsoever, was enlightening in a lot of ways. If you’re interested in flavor combinations and how they work, then thinking strictly in terms of percentages and ratios, even just for a change of pace, can do you a lot of favors. It’s not so mysterious.

Ingredients can have surprising chemical properties.

When you’re dealing with maneuvers you don’t normally perform on vegetables, fruits and meats, you begin to know them and their chemical make-ups much more intimately. Low-methoxyl pectins require the presence of calcium, which is naturally present in some fruits and vegetables. High-methoxyl pectins require a specific level of acidity. And so on. It’s great to know these things about your foods not only for future cooking purposes, but for your nutritional knowledge.

Sometimes, you have to break what already works in order to create something truly unique and remarkable.

This is coming straight from the horse’s mouth. As thoughtfully described in this post on Ideas in Food, breaking something and fixing it in new ways is a catalyst for creativity. This is how Alex and Aki came to so many of their recipes. While counter-intuitive, the method seems to work. I can relate to the thrill of doing something that I think has never been done before. By anyone. But there’s always that point, Alex warns, when you have to step back and take a look at the bigger picture, come down off that rainbow and maybe, sometimes, discover that it’s all for naught. He says that Aki is usually the one who first goes, “Hey dude, come back! Stop!”

… as long as it’s with something as light-hearted as dinner, not your date. It’s true, deceit holds illicit pleasure in many fields too, but what’s so fun about using it in the kitchen is the delight it gives unsuspecting eaters, so long as your dish still tastes good. It’s the ‘who’d have thunk’ factor — a tagliatelle not made from fresh pasta, but fresh mozzarella and ricotta? Wow, they’ll say. And it’s even the same color. How funny would that be to serve it with fresh mozzarella-shaped wedges of actual fresh pasta, too? The cook sniggers, too, in devilish delight.

There’s a thin line where it can go too far, however, and the jokes get old. Deceit can be fun for a while, but it’s bound to reach an ugly point, just like with personal relationships. Nobody likes a constant liar, you weasel, you manipulative, calculating little — oh whoops, sorry. I forgot who I was talking to for a moment there. 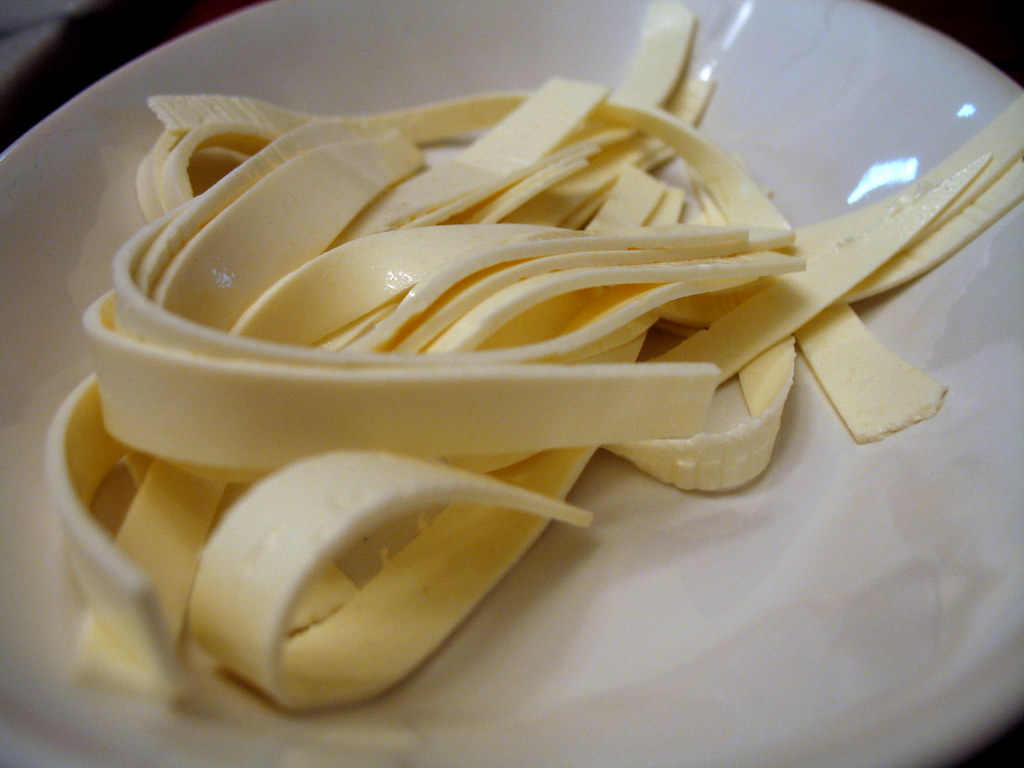 Teaser! Soon to be posted: What Everyone Can Learn from a Little Pig Butchering