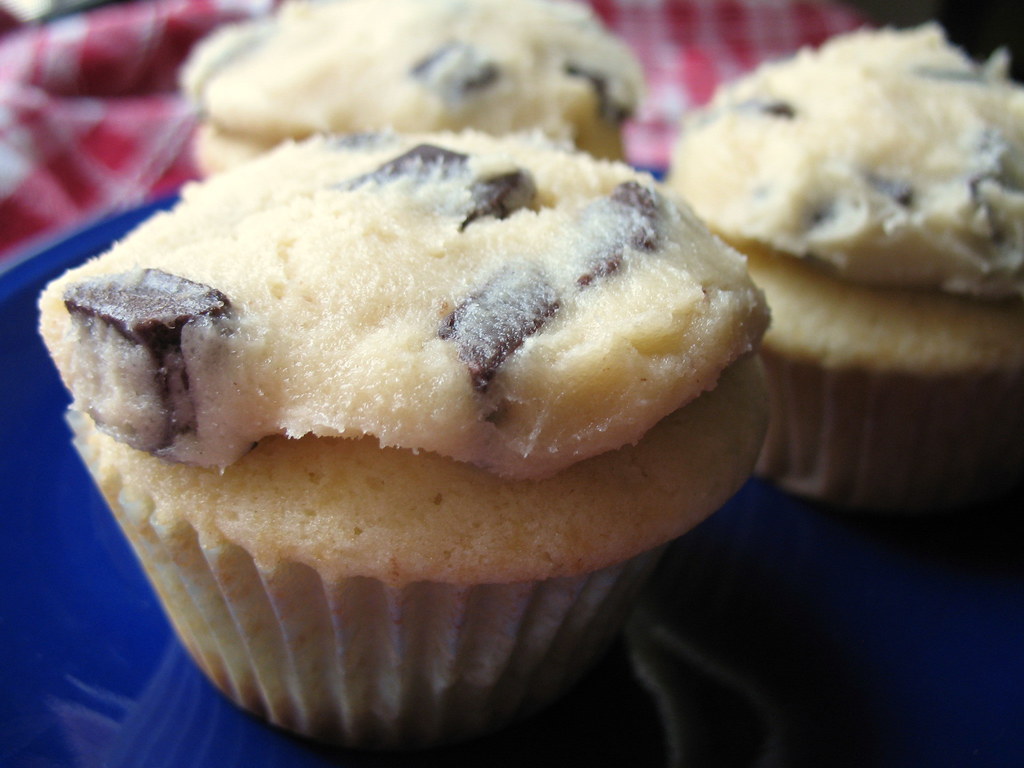 It has, however, been tested in the Brooklyn kitchen of Not Eating Out in New York, and ingested at a gathering of cupcake enthusiasts in Manhattan, held by the blog Cupcakes Take the Cake. It was deemed delicious by all, and no subsequent injuries were suffered that I am aware of.

Despite the slight risk of Salmonella and other food-bourne illnesses, cookie dough has probably been eaten by every American since the raw dough craze took off in the early 1990’s — in ice creams, refrigerated tubes, and straight from the mixing bowl. Here it’s transplanted on a vanilla cupcake as a frosting substitute. When I brought these to a cupcake social hosted by Rachel and Nichelle of Cupcakes Take the Cake last week (just something I scraped together on a whim, which I’ll describe further below), I had no idea the reception they would receive. Rachel’s eyes nearly popped out of their sockets when I told her what was on them — no, it’s not chocolate chip cookie dough-flavored frosting, it’s really the raw dough. This is more or less the same reaction that occurred with everyone else at the party once they found out. 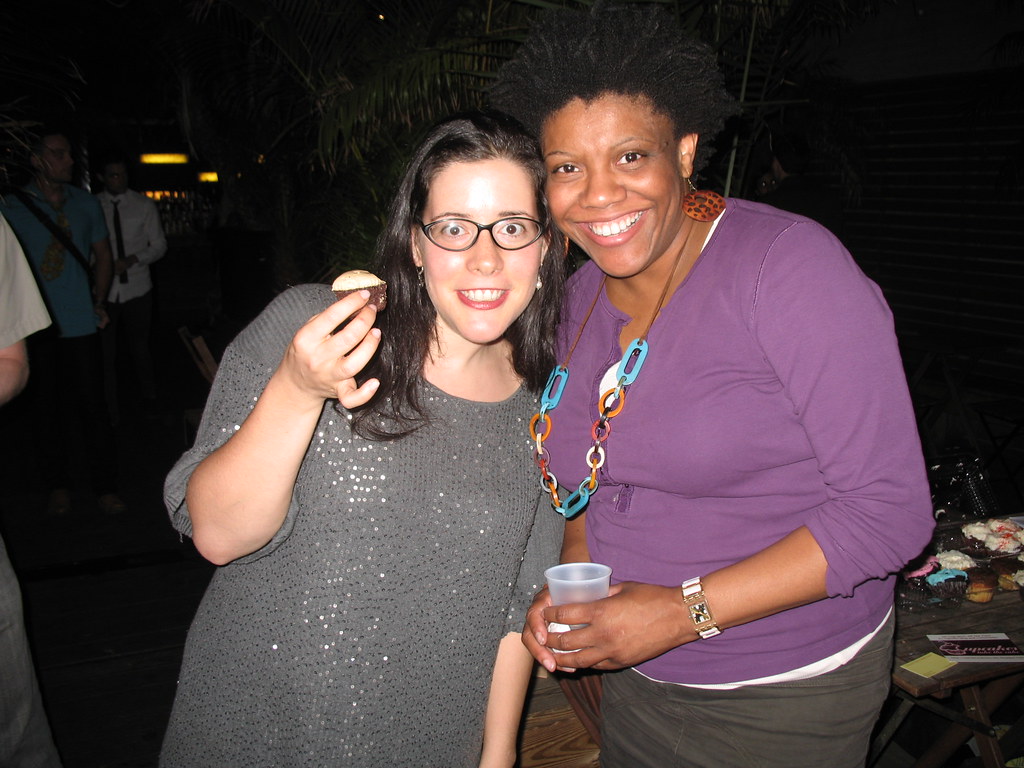 Rachel and Nichelle, two-thirds of the bloggers behind Cupcakes Take the Cake 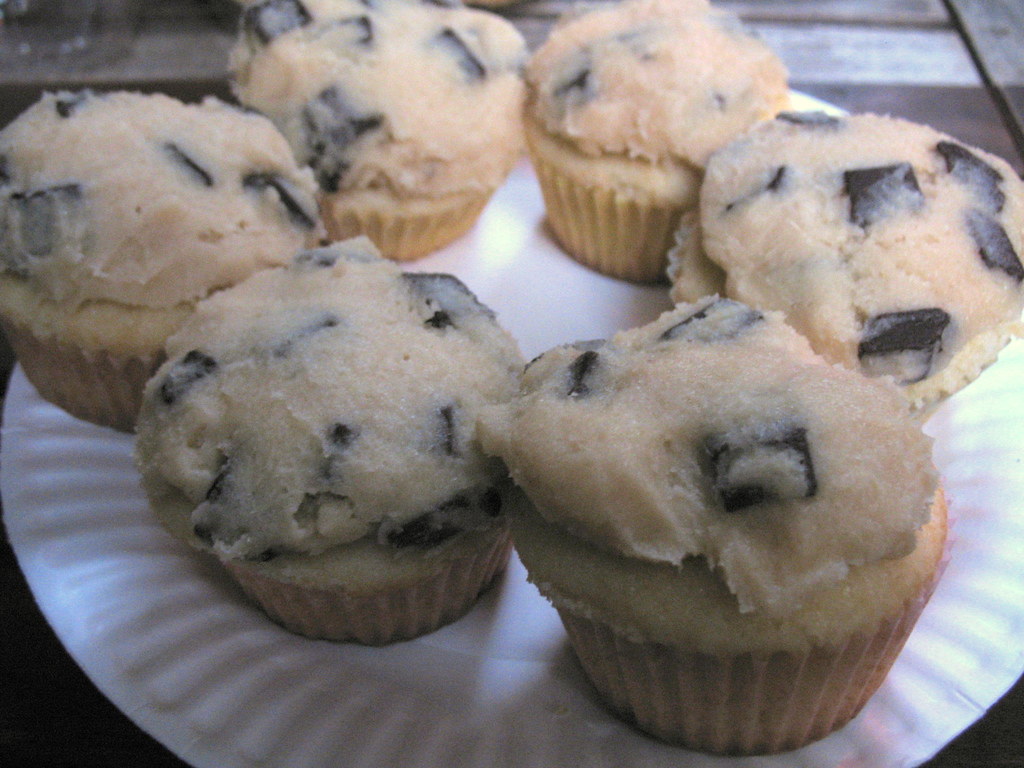 Now, if I have done something with cupcakes that these smart ladies have never seen before, let alone were impressed with, then I could die and go to cupcake heaven happily. But I couldn’t believe how quickly these were all scarfed up! One happy eater even came up to me and said he would bow down if there were room in the place, or something like that. Another commented on how much she liked the fact that the dark chocolate chips I used were such big, boxy chunks. So before I go apply for a US patent, please, go ahead and try making them for your friends next. I’d love to hear how it goes. (Just kidding about the patent.) 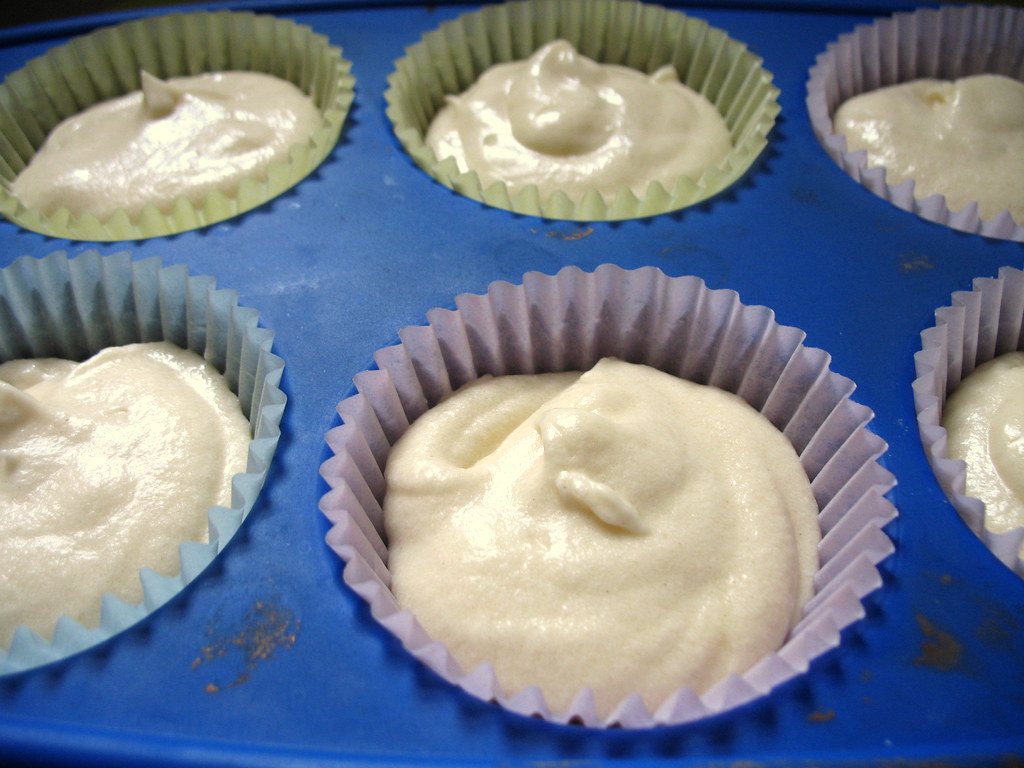 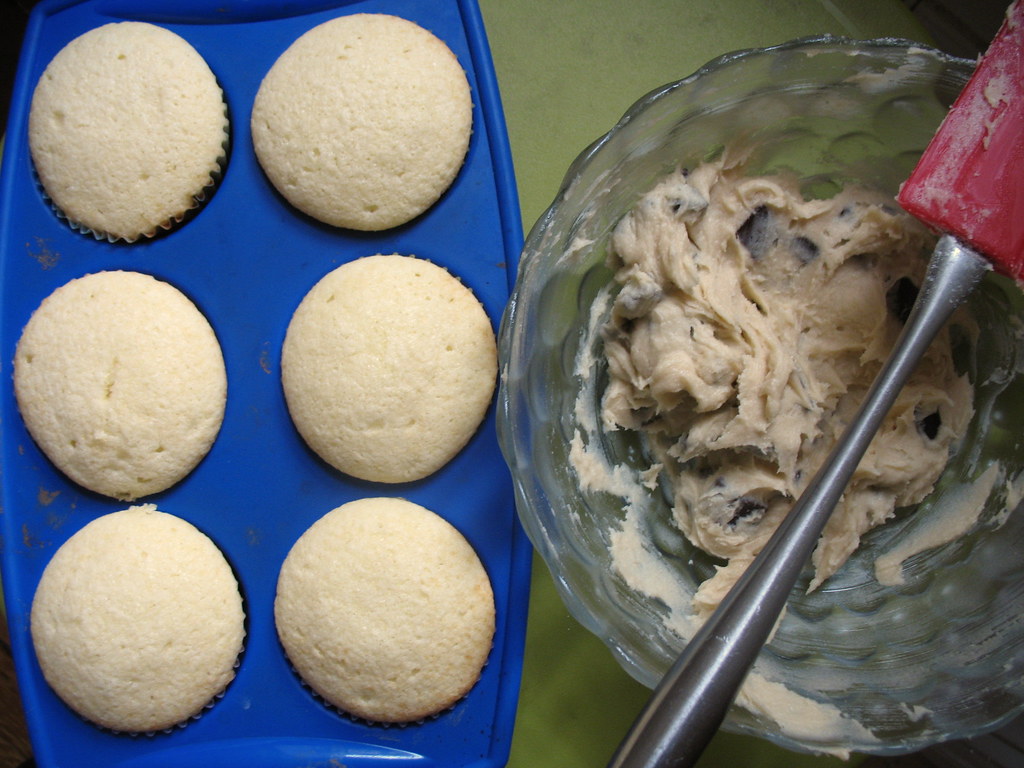 I was talking with someone today who remarked on what he thought to be an uncanny correlation between cupcakes/baking and sex writing, particularly female-written. I can’t remember how we came to this observation, but we soon realized that we both sort of were thinking of Rachel, who is also an accomplished erotica writer. My opinion in this debate would place cupcakes more or less along the lines of chocolate, woman’s natural replacement for sex. (Or at least, that’s what the marketers of Dove chocolate would like us to think.) I don’t really have much else to say to this, but it occurred to me that I got the inspiration for these cupcakes one night a couple days before making them. I was in a sort of bum mood, so I broke out the DVD from the red Netflix envelope that had been sitting on my table for the past week, The Diving Bell and the Butterfly, and popped it in. The moment I got myself situated all nice and snug in front of the screen, I popped back up, as if the couch had springs. Cookies. I wanted to bake myself a tray of chocolate chip cookies. I turned the TV around to face the kitchen as I banged around opening cabinet doors, spilling flour and sugar from their sacks, and whipped up a small helping of six cookies, half-listening to the film in French (and not understanding a word). I had to take down the proportions wildly — the recipe on the back of my package of chocolate chips yielded something like 36. Parsing it down to a mere third, I ended up using one-third of a beaten egg. Nevertheless these questionable calculations, the cookies didn’t turn out too bad. Actually, they were the best I’d had in a while, I thought, as I polished off the last of them before the subtitled movie. Then I fell asleep on the couch. Probably drooling chocolate onto it.

Anyway, that’s my little salvation story from chocolate, or cookies, or their subsequent cupcakes, or all three. Or just baking for the sheer need of something sweet and luscious in my night.


for the cookie dough:
1/2 cup all-purpose flour
1/4 cup unsalted butter, softened
1/4 cup packed brown sugar
1 tablespoon sugar
1/3 of a beaten egg (save the rest for next morning)
1/4 teaspoon vanilla
pinch of salt
1/2 cup or so semi-sweet chocolate chips or chunks

Preheat oven to 375 degrees. In a mixing bowl, beat together the butter, sugar and vanilla for the cupcakes only. Add egg and beat until fully blended and creamy. Combine the flour, baking soda and salt in a separate bowl. Gradually add flour mixture to butter mixture, alternately adding the milk gradually. Divide equally among six cupcake liners in a muffin tray. Bake about 20-25 minutes, or until a toothpick inserted into the center of a cupcake comes out clean. Let cool completely.

Meanwhile, make the cookie dough: Beat together the butter, sugars and vanilla. Add the egg and beat until creamy. Gradually add the flour and salt, and once fully blended and smooth, add the chocolate chips. Cover and chill in the refrigerator at least 15 minutes. Divide dough into 6 equally-sized balls and press with your palms into discs resembling chocolate chip cookies. Press on top of the cooled cupcakes.

Nine brownie points: Doesn’t it feel oh-so-good to be so bad once in a while? I can’t think of anything redeeming about these cupcakes healthwise, really, unless I wanted to jump in on the antioxidant power of dark chocolate campaign. Health warnings aside, this recipe might actually be a little better for you than a typical vanilla cupcake topped with a typical-sized scoop of typical buttercream frosting — there’s just a little less butter and sugar in the dough. But that’s really not the point, now, is it?

Two maples leaves: I’m drawing a blank here. Sure, my refrigerator is generally stocked with hormone-free, organic or cage-free butter, milk and eggs. Aside from those and other pantry staples, I did nothing to scope out more locally-produced or perhaps fairly traded chocolate, though, so the package I got is some generic Baker’s brand. Another (less desperate?) time, I suppose.