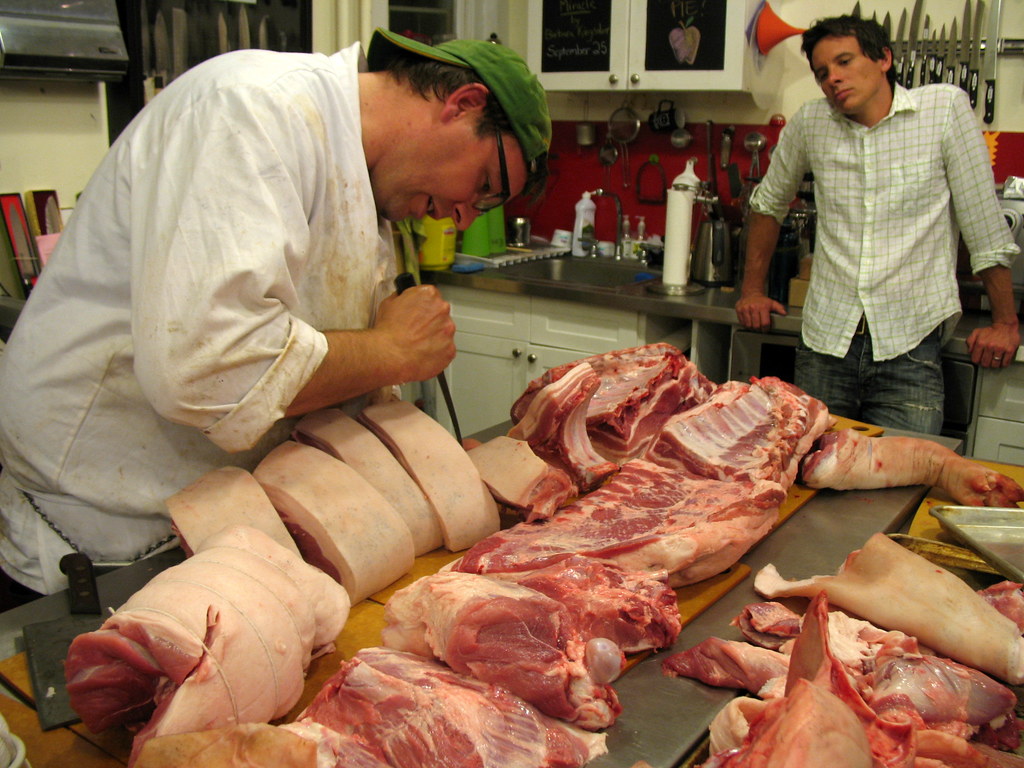 Okay, so maybe that’s a pretty big pig. Last week, I shared with you four lessons I learned in the geeky, futuristic world of high-tech food science. Perhaps I should have preceded it with this post, on a much more primitive practice: butchering. Still, it requires no less skill, experience and serious passion to hack up a hog than it does to turn sauces into silly string. I’m grateful to have learned these lessons at a sold-out pig butchering class at the Brooklyn Kitchen, under the expert guidance of Tom Mylan.

First of all, I apologize to those who don’t eat meat and may be offended by these photos. For the rest of you who will gladly tear into a chop, sliver of pork belly, or carnitas taco, I allow you no excuses. If you’re going to eat meat, consider the gore as well as the beauty of a freshly slaughtered animal. This one is a Berkshire pig, pasture-raised in upstate New York and according to Tom, a little on the small side. This observation is telling of its vast difference between most pork produced in the States — it hasn’t been cloned and engineered to weigh exactly the same as the other pigs in the farm (or rather, factory), and has unique DNA. But we’ll get into this further a little later on. 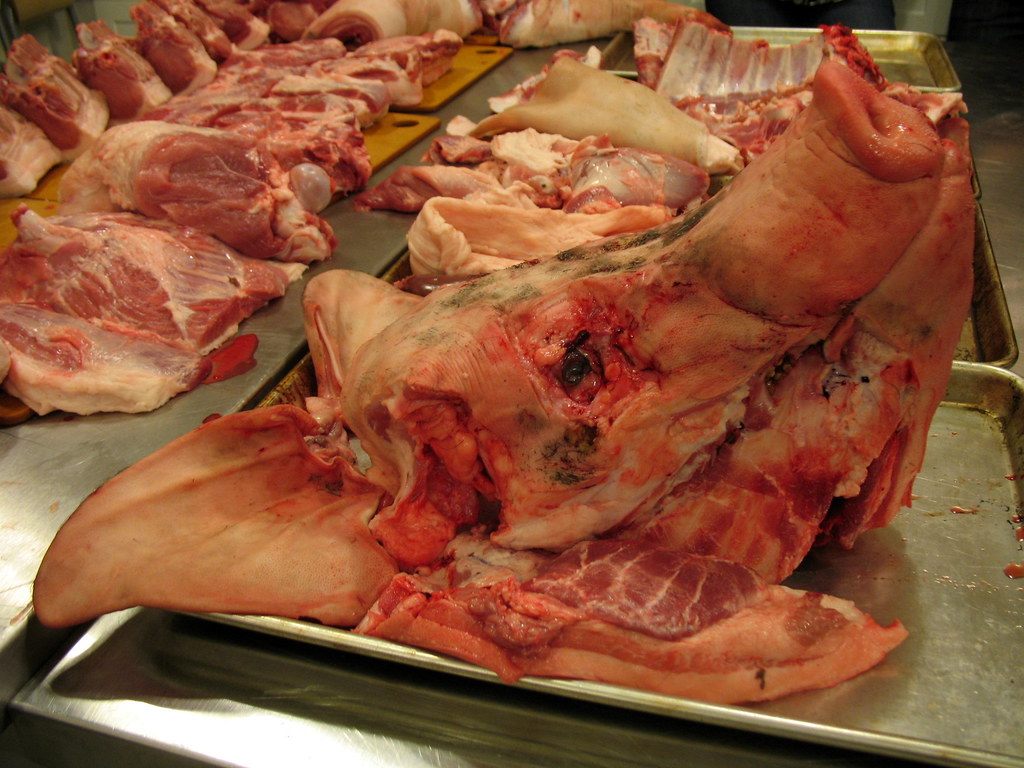 Something of a Brooklyn foodie fixture, Tom is the resident butcher for sister restaurants Diner, Marlow & Sons and Bonita, and is soon opening a butcher shop nearby. (You might also remember Tom as co-creator of the Unfancy Food Show, a fellow judge at the latest Chili Takedown, and from his blog Grocery Guy.) Unlike most restaurants, Diner, Marlow and Bonita transformed their protein procedure a couple years back by ordering only whole animals from local producers. The more organic, from-the-farm approach would benefit all parties, but also require a hard-working butcher. This is where Tom came into the picture. The latest addition to this nexus for meats, his new butcher shop is where you might purchase the leg of the same lamb whose chops are being served in one of the restaurants. 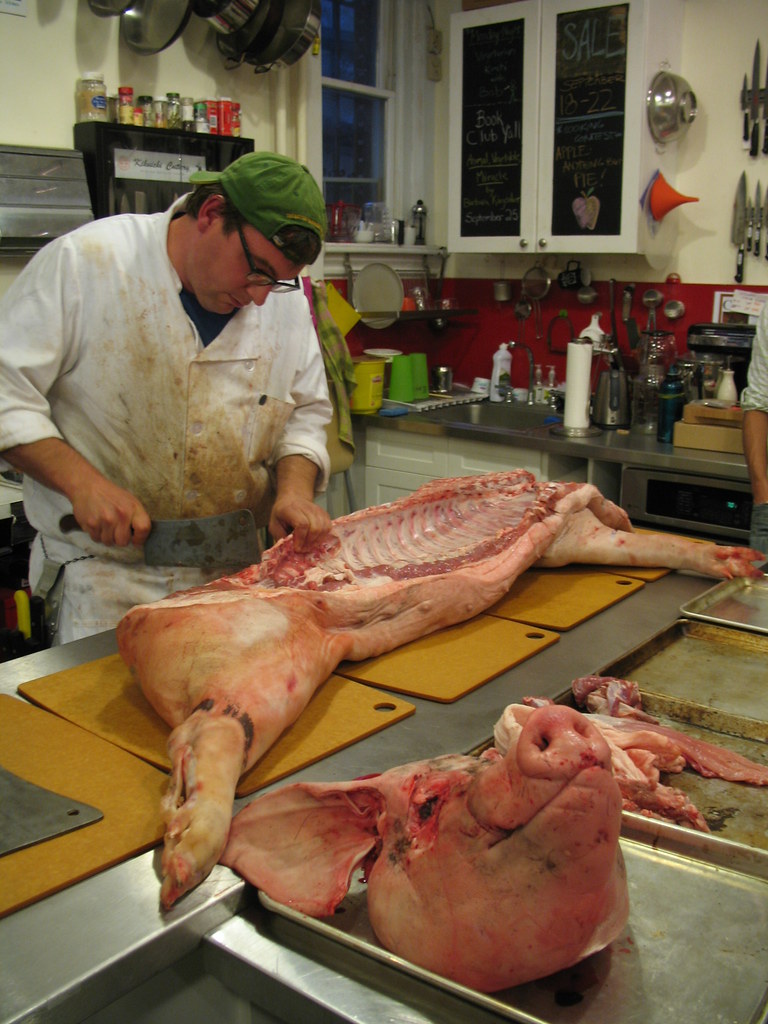 For this introduction to the basics of butchering, we began class last Tuesday by talking a bit about the heritage pig breed. Adding to the primitive nature of the class, Tom had forgotten to bring his electric saw. So throughout the evening, he broke down the carcass into familiar cuts using bare muscle, getting “all Medieval” on that enormous side. We got an explanation on each of the parts along the way. For every chunk chopped off, there was always numerous uses for it; for instance, a strip of “leaf lard” could be rendered and used to make incredible pastries. (Pork pot pies, anyone?) After the side and trotters were all pared and neatly stacked, we ended with the head. Though many cultures have methods of cooking animal heads and their various entrails, Tom thinks they taste pretty horrible altogether. (I know of one person, however, who is quite zealous about making it taste and look amazing. Check out what Winnie did with the head at a previous class.) 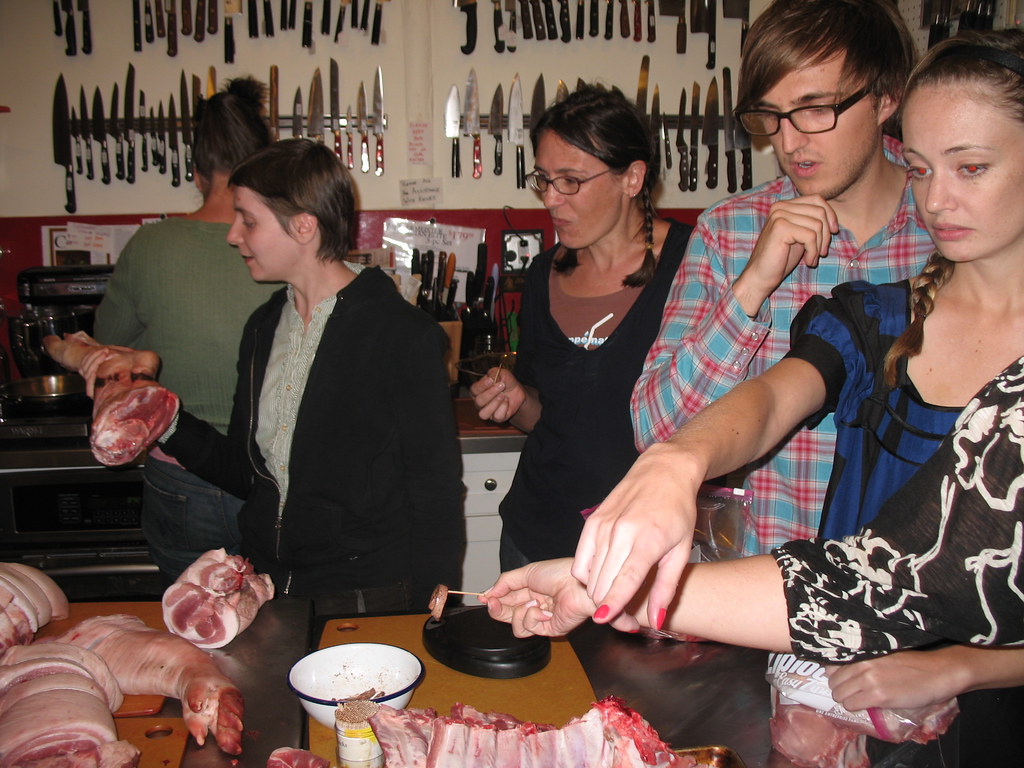 the class picks their take-home cuts 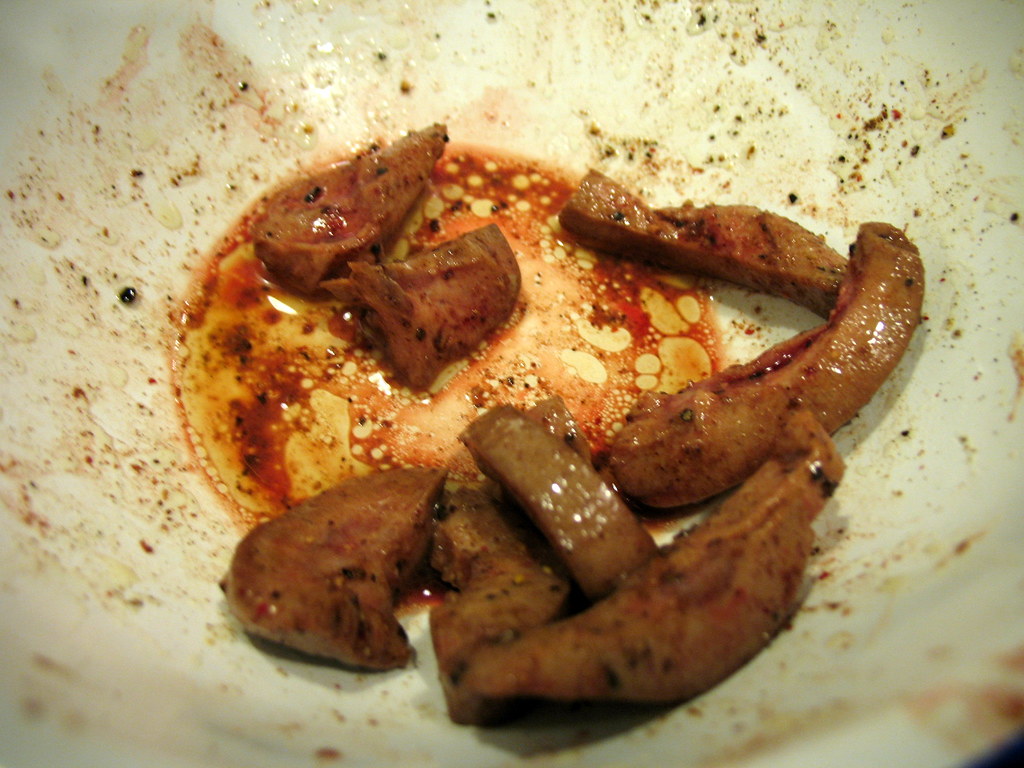 savory kidneys were sauteed as an after-class snack

Once the ears were trimmed off (to turn it into a dog snack for Woody, the Brooklyn Kitchen’s black lab), and the cheeks removed (which, like beef cheeks, are great for braising), the pig had been fully butchered. Myself and the eight or so classmates stood before a countertop crowded with various cuts. We each got to take home about eight pounds worth, taking turns to choose our preferred parts. This probably ranks the most valuable aspect of the class — scoring that much high-quality meat. It was a little tricky bringing the stuff back home with me on my bike, but my huge hunks of loin and shoulder are safely brining now in my fridge. I’ll be using them to make a hearty chili for the Chili Takedown at the Brooklyn Botanical Garden’s annual Chile Pepper Fiesta on Saturday… whee!

Digressions aside, there is so much to learn about the fine art of butchering that it wasn’t really my intention to come into class with the hopes of learning how to better wield a cleaver. I came to acquaint myself with an age-old tradition, in the hopes that the art of butchery became better re-acquainted with the rest of the average population. I can imagine that the opening of Tom’s butcher shop will do much to promote this, as well as the continuation of these classes, of course. So, without further ado, here are some of the highlights that I learned.

A good butcher is hard to find.

Most butchers, should you be lucky enough to have one in your neighborhood, simply don’t know what to do with a whole carcass. Most meat is cut by huge bandsaws and distributed in individual pieces to the butcher shops (or supermarkets, or restaurants) that they’re going to. But a few generations ago, this wasn’t the case — taking apart an animal was just something most people knew how to do.

To get started in his field, Tom took a month-long boot camp in butchering in the home of Josh and Jessica Applestone of Fleischer’s Meats, who supply some of the meat for the restaurants. “It was about four months too short,” Tom admits, but after being thrown into the enormous workload that the restaurants required, hacking away at whole animals, he says he reached this gestalt where, suddenly, everything makes sense, and you figure out the way animals grow muscles. Nowadays, Tom says he can’t look at a living thing without thinking about how to take it apart. 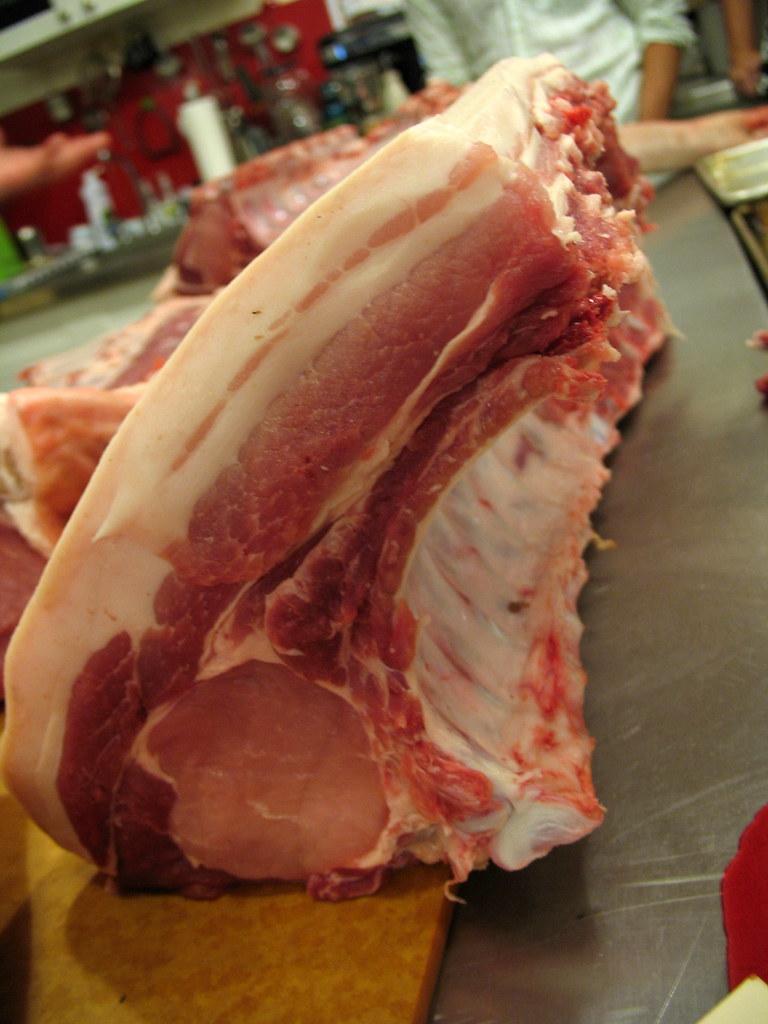 There is no one, true way to section up an animal.

There are a lot of discrepancies between even the British and American categorization of cuts. For instance, the British name a longer section of the side “pork belly” while the American standard is smaller. These are essentially two cuisines following the same rulebook when it comes to cuts, so just imagine all the cultures outside the Western world — totally different preferences, totally different customs.

This was especially intriguing to me, and I suddenly felt very unenlightened to the worldwide ways of meat butchering. I guess the beginning of that knowledge is simply knowing that this shape above is not the end-all-be-all of pork chops. “There are as many ways to cut up pigs as there are countries that have pigs,” Tom said.

I know, that last word sounds a little juvenile-ishly extreme, even for a somewhat subversive blog written by someone who wouldn’t eat in restaurants for two years. But, if the GOP is going to continue tossing around such archaic profanity where it doesn’t belong, then to PURGATORY with it, and let’s just call the “other white meat” evil.

Let me explain what I mean by that: Back around the time when this very campaign was taking off, hailing pork as a low-fat protein, this claim was enabled by genetic engineering that sucked out much of the pork’s natural flavor but moreover, streamlined its production in such a way that would scare even the most fervent bacon lover. Called “white pig,” the product churned out by the industrialized meat-packing majority is made from genetically identical pigs selected for quick growth and low fat, and who have never spent a day outdoors. Many of you probably know much about this already, and if you’ve read Michael Pollan’s The Omnivore’s Dilemma, you may recall such disturbing details as pigs stacked head-to-toe in cages their entire lives, often getting distressed and biting one another’s tails off and causing infections.

On the other hand, pasture-raised pigs from conscientious farmers, such as the one Tom was butchering in class, are incomparable in flavor. The darker the meat, according to Tom, the better. As he trimmed away some of the fat from the loin, we noted that the fat had a yellowish hue. “That’s from the beta carotene, from the grass,” Tom explained. He also conceded during class that if he had to butcher normal, industrialized meats for a living instead, he would quit.

Okay, I couldn’t resist sharing this very minor revelation along with the slightly more relevant ones. But after we finished the butchering demonstration, we began talking about the next steps — cooking the cuts. There were plenty of hunks of loin all trussed up for roasting, coated with a hefty layer of fat. What to do with the leftover skin? someone in the class asked. The tough exterior of the animal, which could be carefully shorn off, was deliciously fatty and flavorful, and perfect for wrapping a roast of rabbit with. Rabbit meat, Tom explained, is very lean and therefore tricky to roast because it dries out easily. So one thing chefs do to solve this problem is dressing it in a pig skin suit. It adds flavor and keeps the rabbit meat moist, but more importantly, “I just like the idea of cooking a rabbit in a pig suit,” Tom said.