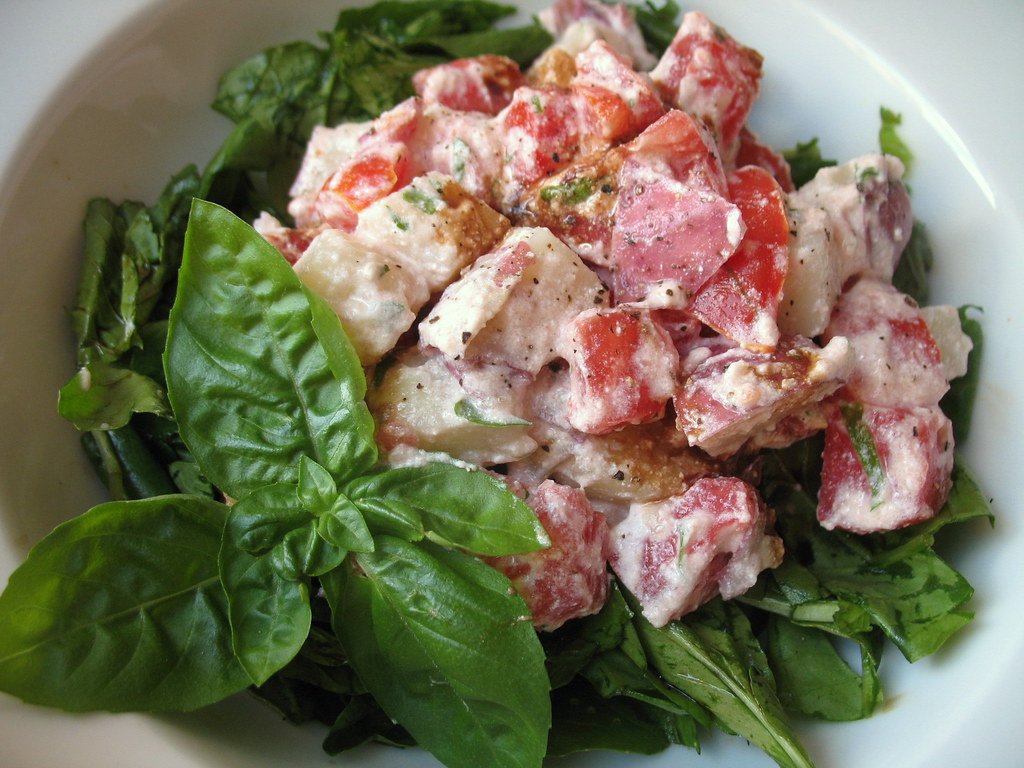 Here thee, it’s another alternative to mayonnaise in one of your favorite summertime side dishes. What have I got against mayonnaise, you might be wondering? Not a whole lot. I like the old may-o. It’s one of the mother sauces of French cuisine, so nobody can argue that it deserves respect. But this potato and fresh tomato salad has none of it. Yet it’s perplexingly rich and refreshing at the same time. Savory and sweet. Summery and wintery. Potatoey and tomatoey.

That pretty much sums it up. It was by no means a difficult day in the kitchen when, after unloading a sack of Greenmarket purchases, I chose some ingredients to toss together in a bowl. My favorite find of the day had been a huge bag of extra-ripe and partially smushed tomatoes, which I paid only five dollars for. Of course, not all of the dozen or so were that bad. Some were good to great, so those I used those to chop up fresh in this salad. The rest of them I gave a rough chop and simmered into fresh tomato sauce, which I might need to freeze before I can finish it all. 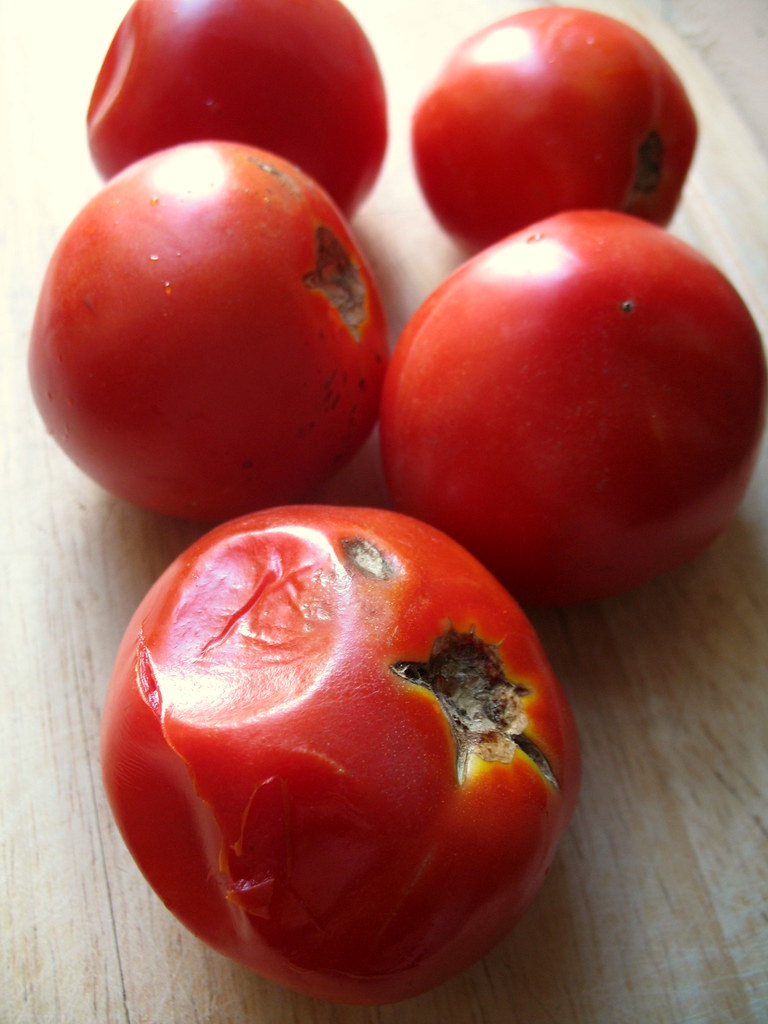 discount tomatoes from the Greenmarket, partially smushed, and perfect for sauces 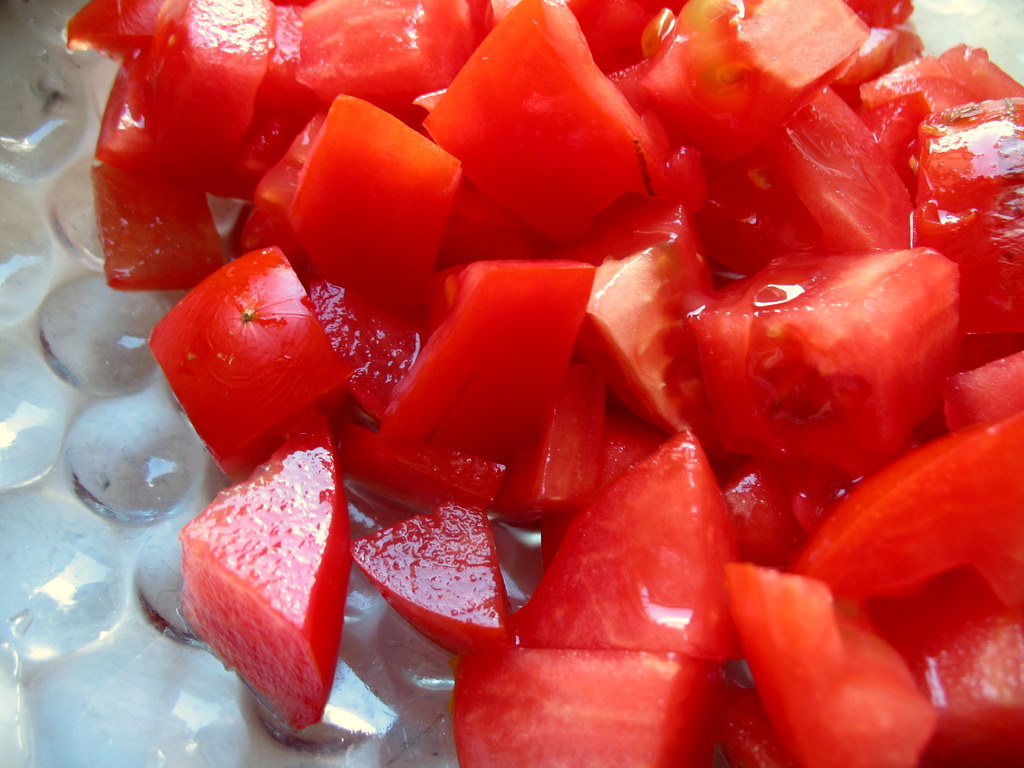 the better ones of the bunch

I’d just wanted to make potato salad and keep it in the fridge a few days. I’ve seen lots of varieties of it in my days but never had one with fresh tomatoes in it. But with my surplus of tomatoes it seemed like one of those ideas that makes you say, why not? And when I remembered a half-canister of ricotta in my fridge, the mantra received an encore. 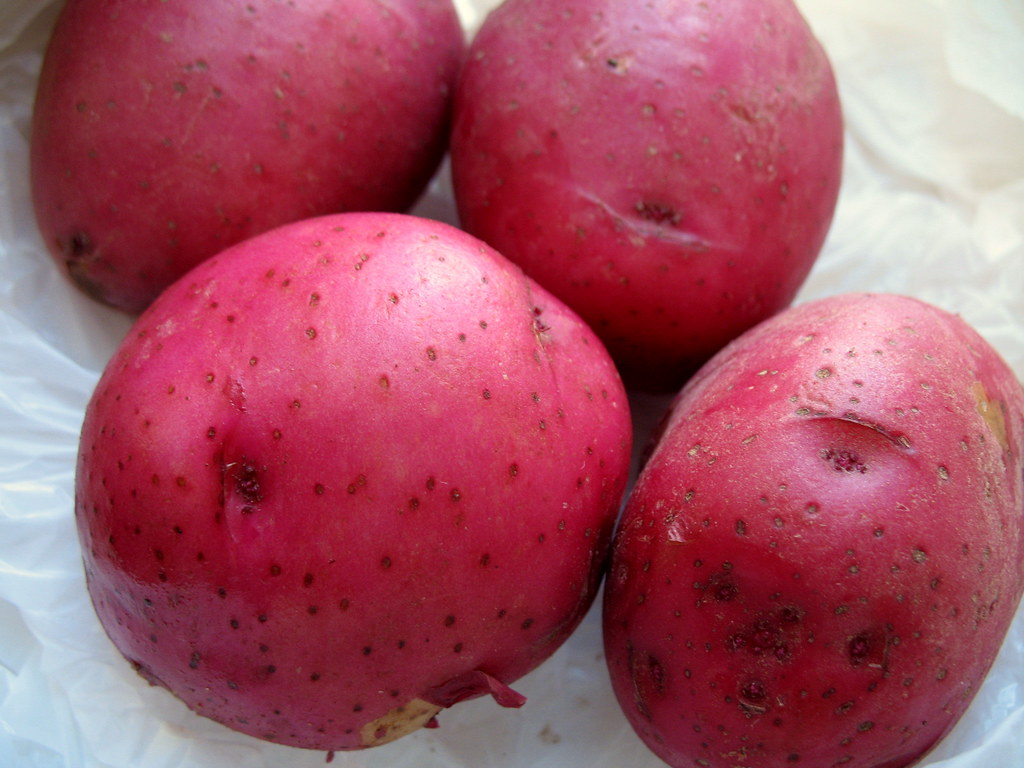 the farmers’ stand selling these red potatoes had a sign that read: “just dug”

Torn fresh basil and a bit of chopped parsley goes a long way in turning this dish from so-so to subtly spectacular. A drizzle of Balsamic vinegar is nice, too.

I served this on a bed of fresh arugula at first, but with the leftovers I ate it straight out of the bowl, and preferred it that way. Arugula is pretty overpowering stuff. (Or maybe my bunch just wasn’t so “baby.”) Unlike mayonnaise, ricotta is something you might actually want to eat alone, so I’m not sure about bludgeoning it with too many greens. As for seasoning, a touch of salt and pepper is all that this really needs. That is, as long as you have good, flavorful tomatoes, and don’t want to make them feel bad. 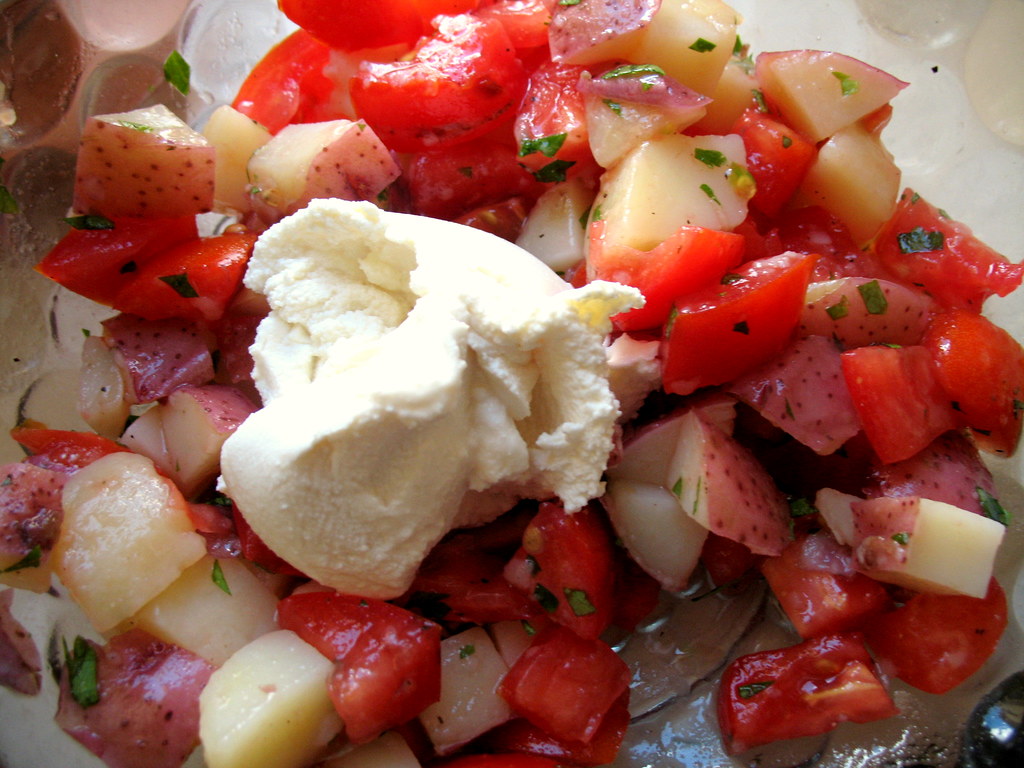 Boil the potatoes until a fork goes through easily. Drain and run under cold water. Let cool completely. Dice to 1/2″ – 1″ cubes. Combine in a medium bowl with the diced tomatoes, parsley, basil, ricotta, a pinch of salt and pepper, and gently mix. Serve with a drizzle of Balsamic vinegar and optional olive oil.

Five brownie points: So I just compared the nutrition facts on my container of part-skim ricotta with a jar of light mayonnaise and was pretty disappointed with the findings. For some reason ricotta just tastes, sounds and seems lighter than the egg yolk and vegetable oil emulsion that mayonnaise is. A 1/4 cup of the ricotta has 20mg of cholesterol and 5 grams of fat, while a tablespoon of the mayonnaise has “<5mg” of cholesterol and 3.5 grams of fat. A tablespoon is less than a 1/4 cup, but I’m a little surprised about the cholesterol — I guess Hellmann’s is really onto something with their “light” varieties. The main plus about using ricotta instead of it, though, is that it boasts calcium for that fat. Tomatoes and potatoes both offer trace amounts of calcium, as well as potassium and Vitamin C. Keeping the skins on the red potatoes provides a little more fiber, and of course, tomatoes are great sources of lycopene.


Six maple leaves: Tomatoes are finally in season, locally, and I feel a little extra “green” for gobbling up the farmer’s less desirable ones. While they’re available year-round, this is actually the time of the year when potatoes are harvested, too, so if you want them “just dug,” as I was sold on, now’s the time to get them. The ricotta was a generic supermarket purchase I’m still working on, so no points for that. My herbs are doing very well right now on the windowsill, which are as local for me as it gets.