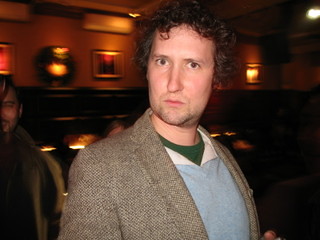 This Sunday marks the fourth installment of the sporadic but spectacular home cooking challenge known as the Chili Takedown. Here’s what the event’s honorable chairman had to say about chili, everyone’s favorite late-summer light meal.

I’m Matt Timms! I first used chili as a tool to make friends in NYC. I hosted chili parties, and now, everybody loves me! It’s true!

2. What was the best chili you ever tried, ever?

My mom’s chili when I was a kid. No doy.

3. What was the best chili you tried at a Chili Takedown? (It can be mine.)

The general rule at the Chili Takedown is that There Are No Losers. Even the losers are made to feel special! Sadly, it is I, Matt Timms who is the realest loser. I am always too busy to ever eat a bite of chili all night.

4. What are your next plans for chili?

I’m writing a brilliant and debauched chili cookbook. It is filthy!

5. Why do you think people compete so fiercely when it comes to chili, and not, say, clam chowder, or split pea soup or gazpacho?

Good question! Why do so many people think their dumb opinion is so important? Everyone thinks they know what real chili is. But if there’s one thing people take away from a Chili Takedown, it’s this: people can be very wrong about chili, and that’s okay. Chili is so awesome and versatile! Apple pie is always apple pie, and there’s only one way to make split pea soup in my opinion. And there is something vaguely creepy about someone who says they are “obsessed” with gazacho. But a chili obsession makes a lot of sense, really.

The only thing that defines chili is beef and peppers. Beyond that, the world is totally your oyster! Oh, and since a vegetarian chili won last year’s Chili Takedown, I guess you don’t even need beef. I’ve used instant coffee, a candy bar, tequila, even canned peaches in my chilis. My feeling is, we’re making chili in New York City — according to some Texans, we’ve probably already screwed it up, so let’s just run with it.

7. Are you a spicy kind of guy, or more sorta mellow?

8. Why do you think that chili seems to be more popular with folks who like to cook at home than restaurant menus? Or is that just a NYC thing?

Isn’t it a bummer how most NYC restaurants kind of screw up chili? Mostly, if you see chili on the menu, don’t get it. The best thing about chili for me is, I make a bunch, and it only gets better throughout the week, when the flavors wed in your fridge!

9. Why did you decide to team up with The Shameless Carnivore Scott Gold for this Sunday’s Takedown? Are you trying to discourage all the terrific vegetarian chili chefs in town?

Scott Gold’s book needs to be boughten and readen by everybody! Plus, as a person, he rules! So it was the obvious choice for the Takedown to team up with dudes who rule. As for all those veggie chili chefs out there, they are riding the snake if they think they can win a Takedown with a veg recipe. And yet it’s happened before! The Takedown truly is the only chili contest of its kind. I’ve witnessed a lot of chili sacrilege at my events, but have never been bummed! Intrigued?

10. Have you ever made chili for a date?

I’ve pushed many a bowl through my face with some great girls. Still, I’m not like one of those weirdoes at the ICS*. On a night out with me, chili would just be one of the elements that I’d provide, of a multi-faceted evening for the senses…

Now intrigued? Check out the official Chili Takedown website for contest entry rules, photos and other stuff. Hope to see you Sunday!

More questions with Matt:
You Are What You Eat, Matt Timms

And questions with Scott:
Here’s Lookin’ At You Cook: Scott Gold