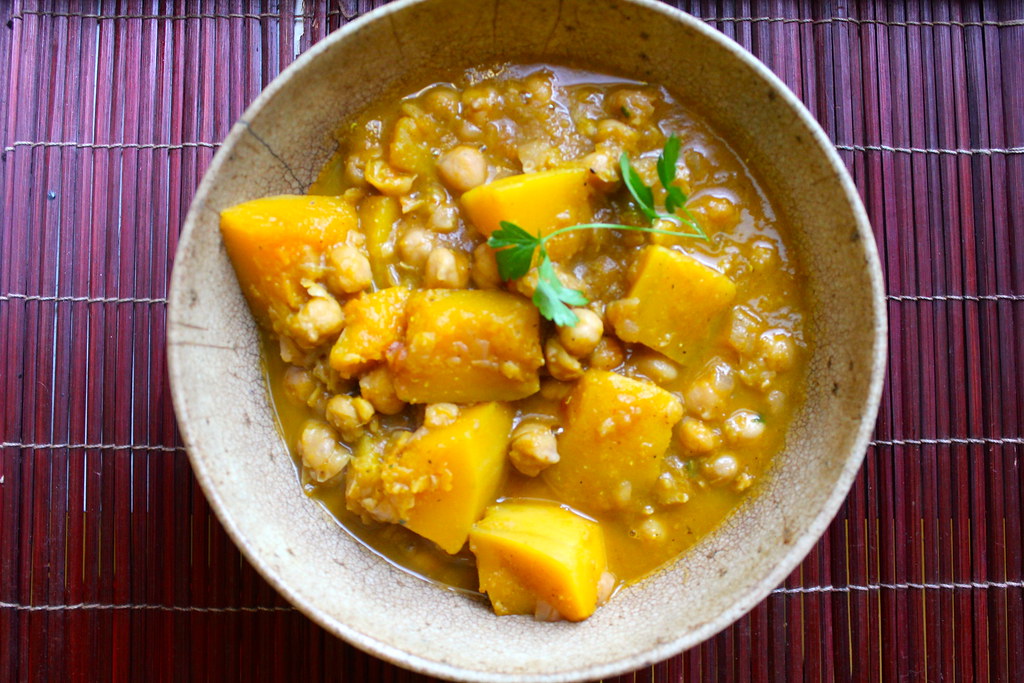 For me, fall is the right time for entertaining. I spent a languid weekend preparing for two back-to-back dinner parties, post-Halloween hullaballoo (I was Kate Middleton for that, did you think you saw her walking down the street in Brooklyn?). It was the perfect antidote to a candy-strewn holiday, and one of the dishes I served for my friends was this vegetarian option, which I’ve been eating for lunches since. Like most long-simmered stews and soups, it just gets better every day.

But there’s an end to everything, and I’ve found the bottom of this pot. So long, my Moroccan-inspired friend. We had good times.

My chickpea squash stew may be finished to the last drop, but its warm, cinnamon tinge and gust of cayenne are lingering still in the memory. I wrote this dish out in my dinner party menu without knowing how I was going to make it, as the words “Chickpea Squash Tagine” just sounded so lovely to me. This was served as a main course option in a dinner where there was also a choice of another hearty stew, Boeuf Bourguignon, and a seafood entree of pan-roasted sockeye salmon (a specialty of my freezer no longer, as it were). On the table was a platter each of roasted root vegetables and sauteed greens, which were passed along its length for sharing. 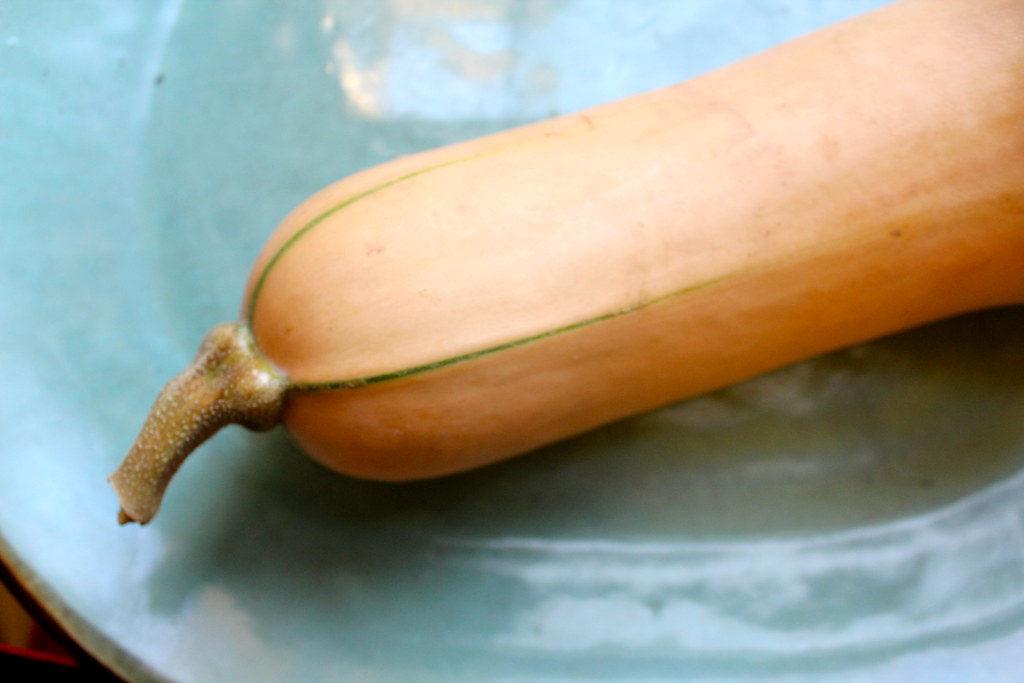 Something about the essence of winter squash, with its vibrant yellow-orange hue, made sense with Moroccan cuisine. And we have plenty of winter squashes just now in season locally. So funny that when I actually did sit down to research recipes similar to what I’d imagined for this–in cookbooks like Claudia Roden’s Arabesque or just on Google–I did not turn up with any matches. Well what do you know? I would just have to invent it.

Taking cues from a Moroccan cooking class I took in the country a few years back, I started by sauteeing some onions with dried ginger powder, turmeric, cinnamon and cayenne. I took the (usually less favorable) intensive route of blanching fresh tomatoes and peeling them before chopping them to add to these aromatics after a good sweat. This is the basis for many Moroccan dishes, I’d learned, like the long-simmered tagines, or thick stews. I hit the sweet spot of the season by having both tomatoes and winter squashes at my local farmers’ market that weekend, too. 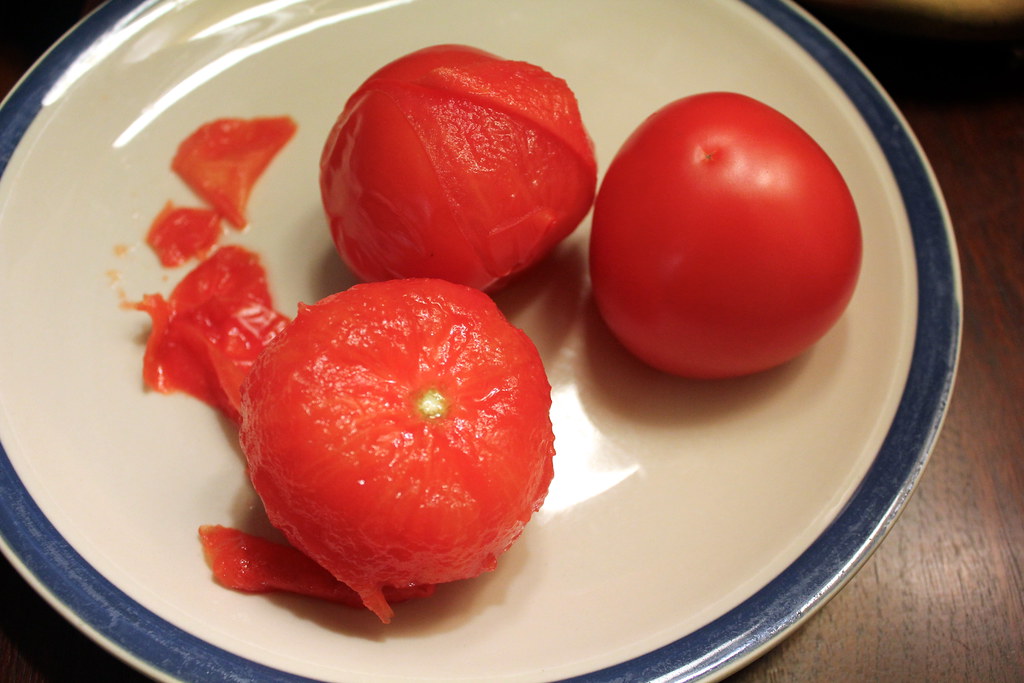 
I don’t have a tagine that’s nearly big enough to cook the epic portion of vegetarian tagine that I made last weekend, so this was all done on the stovetop in a regular pot, or Dutch oven. (Incidentally, the Netherlands do have a number of Moroccan immigrants who are Moroccan-Dutch, like my stew, apparently.) Even though I’ve halved the recipe below, I don’t think it’s necessary to cook it in a proper tagine if you do have one in any case. Just like using butternut squash and chickpeas, not necessarily traditional Moroccan ingredients but similar enough in kind, you can bring out the essence of a cuisine with what you have available. Especially with some good spices and a hefty length of cooking time. At least, that’s my take on it, says this former Kate Middleton lookalike.

Heat the oil in a large, heavy-bottomed pot with a lid such as a Dutch oven. Add the onions and a pinch of salt and cook over low heat, stirring occasionally, until softened and translucent, 6-8 minutes.

Meanwhile, bring a small pot of water to a boil and add the tomatoes. Cook for 30 seconds to blanch, and remove from heat immediately. Let cool for a few minutes. Peel the skins off the tomatoes and chop them coarsely.

Add all the ground spices to the onions and stir well to incorporate. Add the tomatoes and garlic to the onions and cook, stirring occasionally, for 5-6 minutes, or until the mixture becomes more dry and paste-like. Add the drained chickpeas and stir to coat thoroughly. Add the water and bring just to a boil. Add the squash chunks and stir. Reduce heat to a simmer and cover. Cook covered, checking occasionally to stir, for 45 minutes to 1 hour. Taste for seasoning, adding salt and pepper as desired. Lastly, stir in the lemon juice. Serve with couscous and fresh herbs like cilantro optionally.

Three brownie points: A fantastic fuel for the cold season. Winter squash will provide lots of vitamins and minerals like Vitamin C, potassium, B-vitamins, fiber and tons of Vitamin A. Roast the seeds as a snack and you’ll get even more of those, including omega-3 fatty acids. (A bowl of toasted squash seeds makes a nice addition to an appetizer spread.) And from chickpeas, you’ll get filling carbs and heart-healthy protein; you might want to skip the couscous altogether and fill up on this alone.

Seven maple leaves: Easy-peasy on your wallet, kitchen, and the environment. This entirely plant-based meal takes a lighter load of carbon emissions to produce than meaty winter staples, and squashes are easy to find locally produced throughout much of the year. In the summer, you might even want to try this out with summer squash instead of the winter squash used here, added toward the end of its cooking time as they take almost no time to soften.