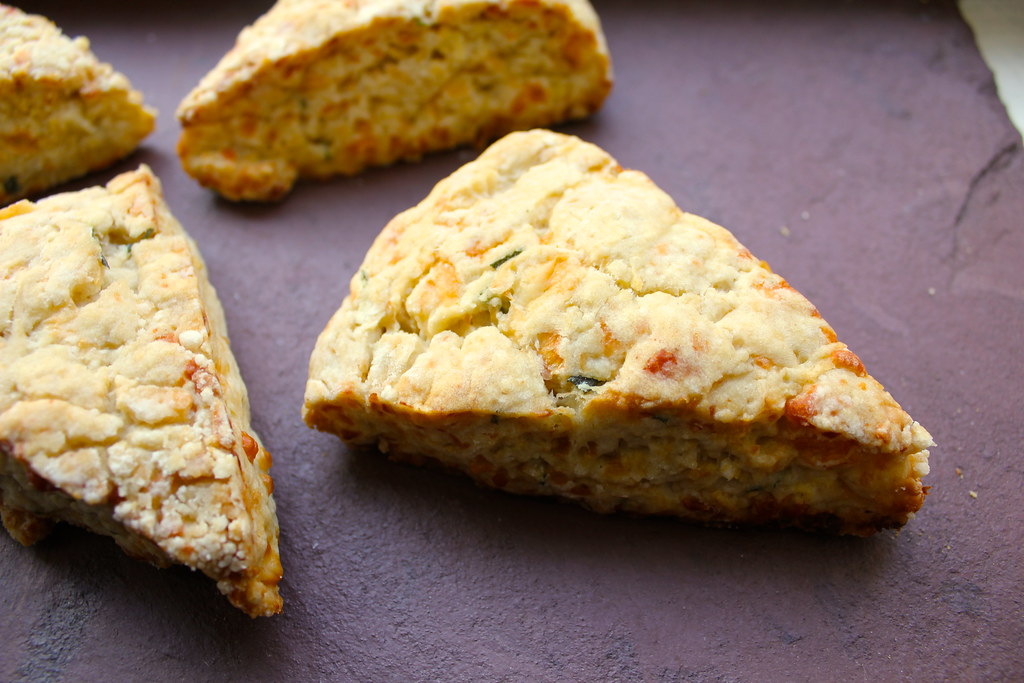 I frequently tell people that I don’t like baking. It’s not that I blurt it out, randomly, but when people learn that I like to cook they often casually ask about baking recipes, or what I like to bake. This is what I like to bake, when it has to be: savory stuff. Buttery baked goods that are bursting with unique flavors, not just sweet. From goat cheese oatmeal cookies to bacon chocolate cupcakes, I think a good baked good needs some balance and complexity. Fortunately, I don’t think I’m alone.

The reign of salty sweets is in full-swing, and I’d be hard-pressed to find a cookie or creme anglais that didn’t have some ratio of both from a chef or bakery owner these days. Salty caramel, sea salt chocolate, and salty pretzel-studded desserts are here–and have been around to some degree all along, but now it’s just more popular than ever to say that your caramel is “salty.” So if a good dose of salt is compulsory in your pie pastry recipes, then try it in scones, even with a sweet base of apple. 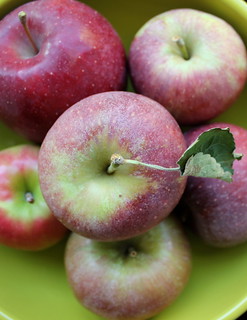 I went apple-picking, at last! Picking dozens of varieties of apples during the last weekend for U-Pick at Wilklow Orchards was a perfect way to spend a fall Saturday. But now I’m left with dozens of apples, and have to get inventive in order to use them all up. 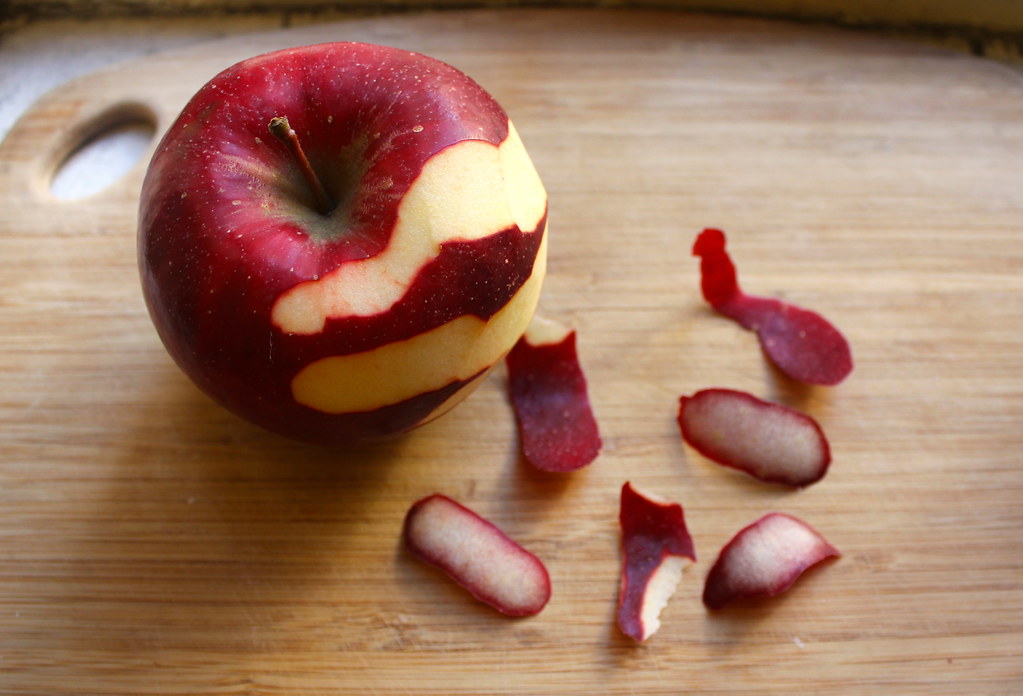 Scones are a great beginner-baker’s project because its basic pastry can be re-interpreted in so many ways: as biscuits, or a crust for a chicken pot pie. At least, that’s the way I make scones–like a buttery biscuit, with any number of additions. Just get some cold butter chunks crumbled with flour and have a go at the many different directions. Leavening, like baking powder, will yield a fluffier result, while leaving this out will give you more or less pie pastry crust. If you’re making this recipe sans shredded apple (or carrot), just use milk or some other liquid to moisten the dough enough that it just comes together to form a ball. You can add raisins or better yet, gratings of orange or lemon peel and a sprinkle of sugar on the surface before baking to make a sweeter variation. 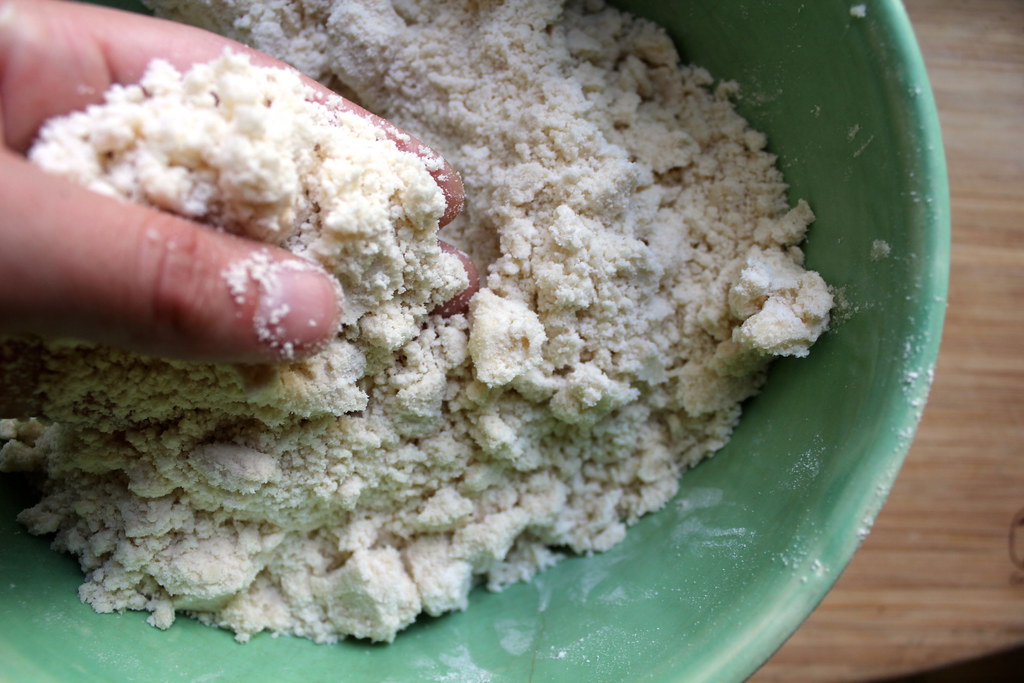 I used a large Rome apple for these scones, a variety that’s aptly named the “baker’s buddy” (listen to more apple geekery with author Rowan Jacobsen of Apples of Uncommon Character on Eat Your Words). These are less juicy, and hold up well when baked. I shredded the apple rather than chopping it into chunks, so that it would meld unnoticeably into the scone. The sweet flavor provides a little intrigue to the dough, and what juices they do lend provided just enough to allow the dough to come together. If your apple is slightly less juicy and your dough won’t form a ball, just add a little touch of milk or water until it does. 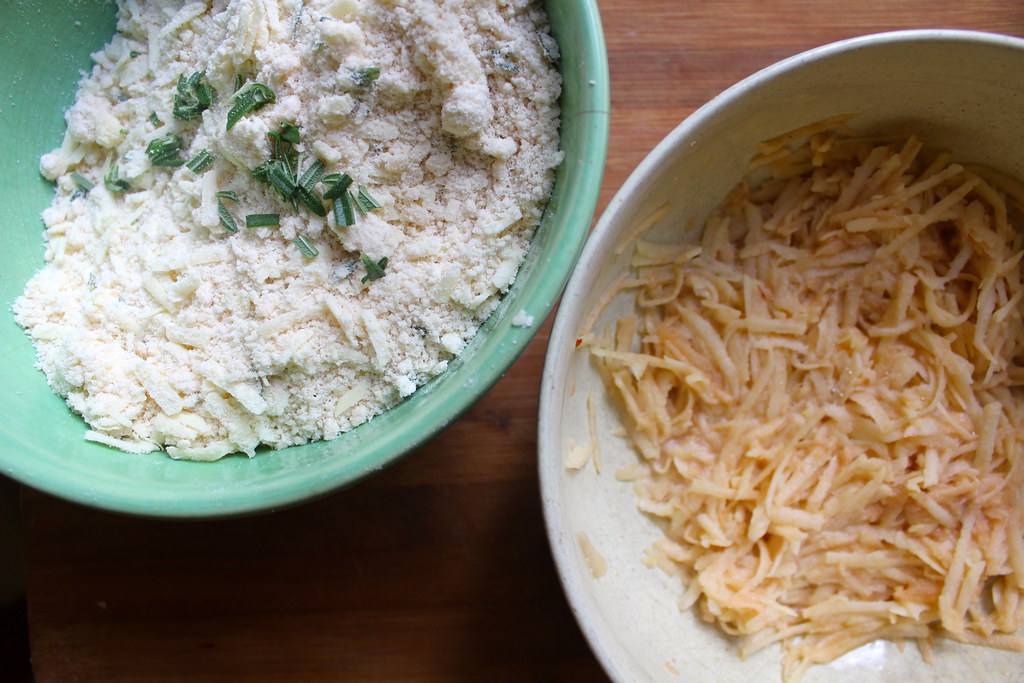 Since we were shredding things, I went with some shredded, sharp white cheddar to mix in as well. Apples and cheddar–a nice fall combo, why not? Finally, some freshly snipped rosemary from an overgrown houseplant was tossed into the dough for an herbal touch. To avoid over-mixing your dough, which will make it become tough, keep the shredded apple and beaten egg separate from the flour, butter, cheese and seasonings until the very end, when you’re ready to combine them. I picked up another trick about good pastry-making from a guest last year on Eat Your Words: Allison Kave of First Prize Pies, who encouraged letting dough rest in the fridge for a good half-hour at least before shaping or rolling out. This time will allow the moisture from the liquids to seep into the flour throughout. 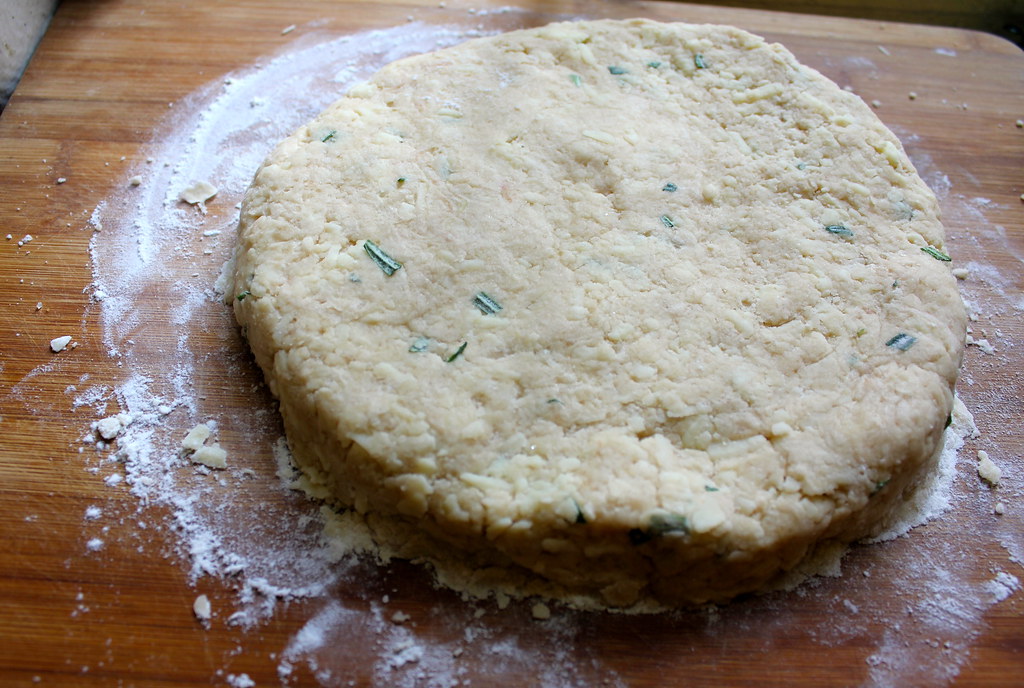 The best part about baking–especially baking something new–is that you don’t know how it’ll taste until it’s done. You can’t taste the batter or dough, really. You’ll just have to wait and see. This is often frustrating for the very same reasons, and can lead to disastrous results at times. But this time, all was good. And the flavor of these scones was a delightful surprise. The cheddar gets crusty and golden at the surface, and the shredded apples cook down so that they do sort of disappear inside those scones. The rosemary is fragrant. All told, it’s a fine slice of fall for breakfast, dessert, or a snack. Try it with your apples sometime soon.

Cut the butter into small cubes. Cut into the flour using a pastry cutter or your fingers, breaking down the pieces of butter just until no pieces is larger than the size of a pea. The mixture should resemble coarse crumbles. Stir in the grated cheddar, baking powder, salt, sugar and rosemary.

In a separate bowl, combine the shredded apples and the beaten egg. Gently fold this with the flour mixture in a very large bowl, just until the dough comes together. If it appears too dry, add a splash of the tablespoon of milk or water. Do not overmix. Once the dough comes together, form it into a ball and cover with plastic wrap. Chill for at least 30 minutes (or up to 1 day).

Preheat oven to 375 degrees. Press out the dough onto a lightly floured surface. Form it into a round disc, about 1 inch tall. Cut into 8 wedges like a pizza pie. Arrange on a baking sheet at least 1 inch apart from one another. Bake for 25-30 minutes, or until tops are golden-brown. Let cool for a few minutes before serving.

Seven brownie points: Far from a healthy breakfast. Baked goods using refined wheat flours and plenty of butter will fill you up, fast, but also kill your energy soon after. Eat in moderation, as a special treat (or trick?).

Seven maple leaves: At least it’s locally sourced, for the most part! Apples, butter, egg and especially the rosemary were foraged from nearby sources. Apples are readily available from local sources this time of year, too, so pile up on your favorite varieties and skip the shipped-in grocery store apples this fall.