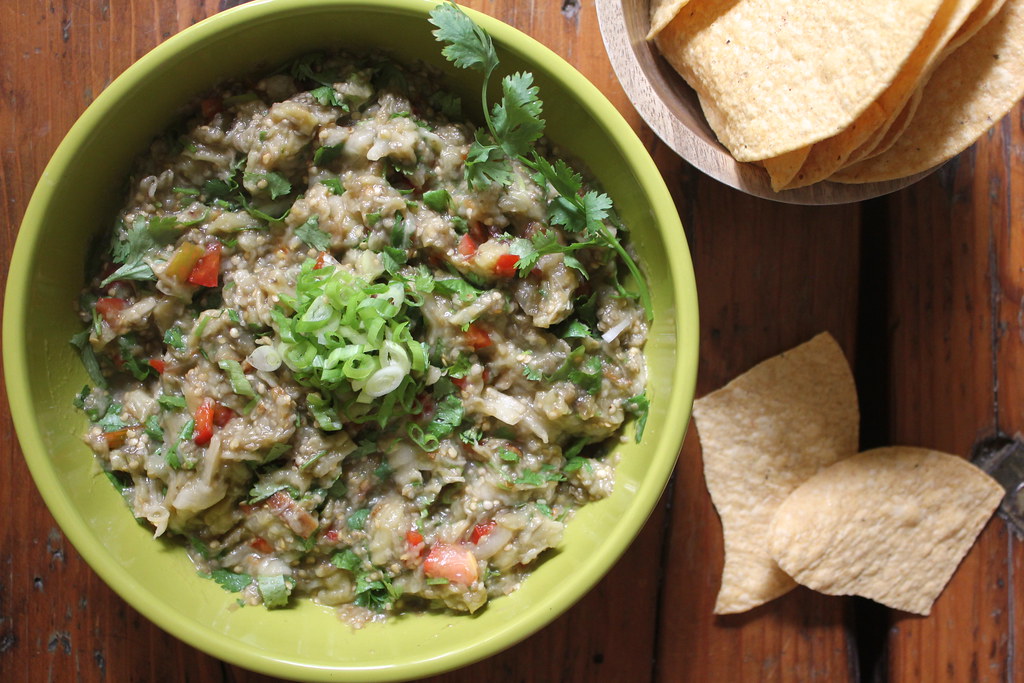 What do you get when you mix two classic condiments: a creamy roasted eggplant dip and a tangy, fresh tomato-based salsa? A colorful cross. And why not? I always liked the brightness of adding fresh citrus juice to roasted or grilled eggplant. It sort of livens the greyish thing up. I also get frustrated, sometimes, spilling the juice of a fresh tomato salsa while trying to scoop it up with a tortilla chip. Or getting one piece of onion on a soggy chip after much effort.

But every late-summer party needs something snackable like this, and every late summer brings plenty of tomatoes and eggplant. Those silky-skinned nightshades, related botanically, seem so different and require such different ways of preparation to bring out their best. 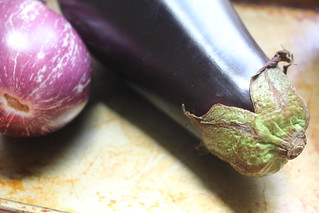 Tomatoes are simple–you chop them up fresh and let them marinate in a little seasoning. So we’ll skip ahead to the more arduous eggplant tasks. I used to think I was allergic to eggplant before I realized that once they’re cooked fully, I had no reaction. It was just a matter of totally softening them, until no longer opaque. You can do this by roasting eggplant, although it may take some time. To be able to peel the eggplants afterward easily, I kept them in large halves sliced vertically. These are salted well and also scored deeply, to help extract some of their juices before going into the oven. 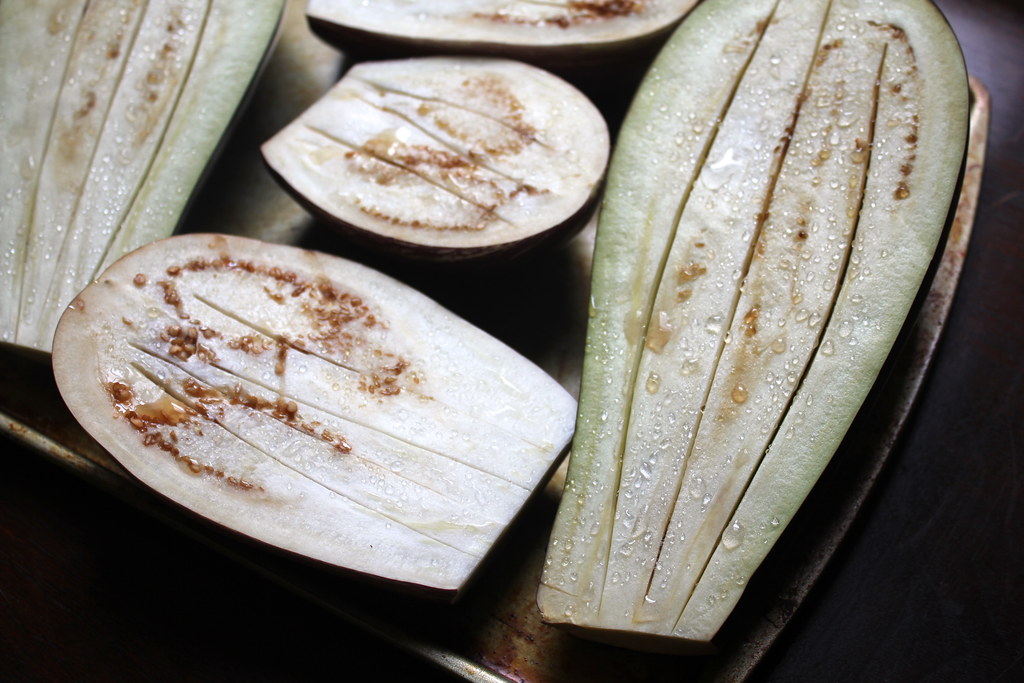 eggplants are scored and salted to extract juices

After sitting like this for a good 20 minutes, the eggplants were squeezed, rinsed, patted dry, and coated with some olive oil before going cut side-down on a baking sheet to roast at a high heat. Then you have to wait again as they cool enough so that you can handle them. 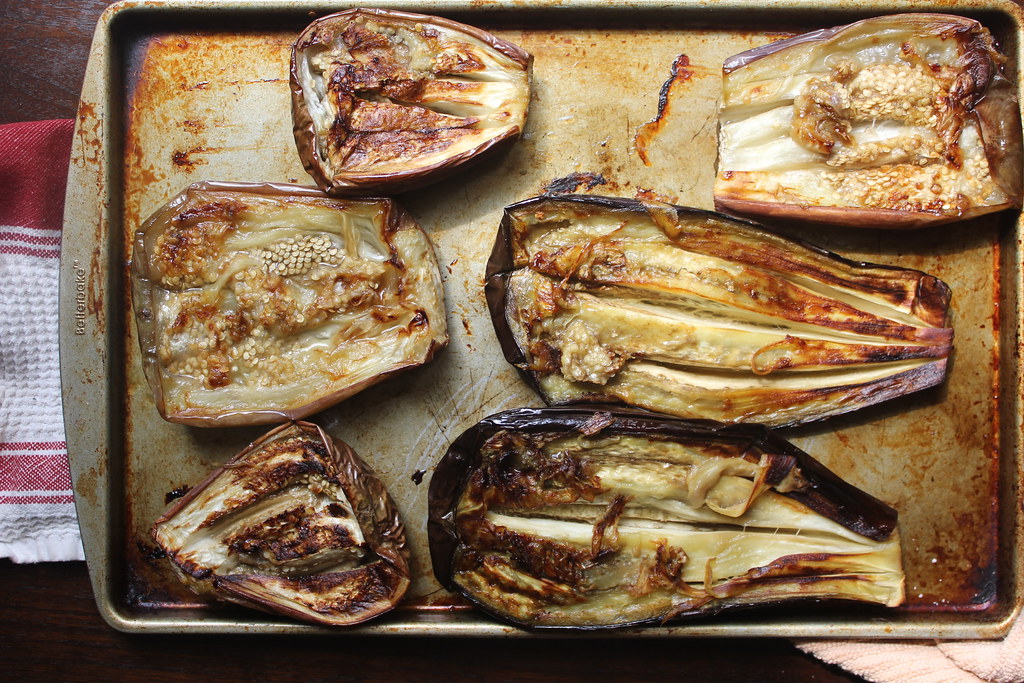 after roasting face-down at 400 degrees

It does take a bit of effort and time–even after peeling the skins from the cooked flesh I let them drain in a colander to remove any extra greyish juices–but roasted eggplant is so versatile the efforts are certainly rewarding. You can complete the long process all the while preparing other things for your party. 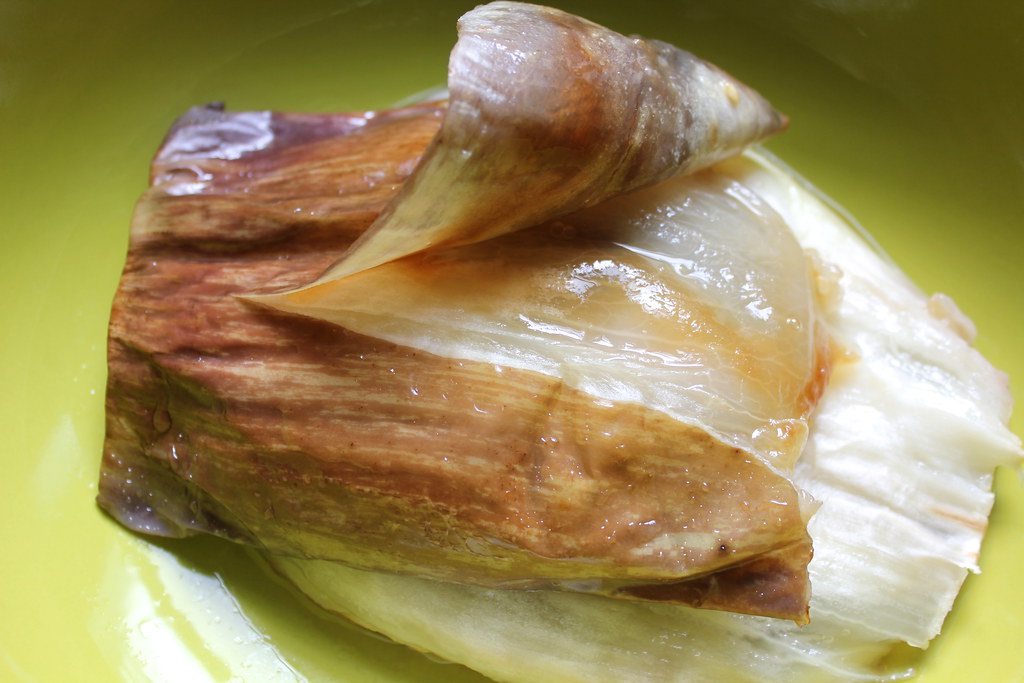 peeling the skins from the roasted flesh

I’d actually wanted to do two separate things with the tomatoes and eggplants that I’d bought at the farmers market, but in the end just put one and two together, with a good squeeze of lime. Lots of fresh chopped cilantro and some scallions went in for garnish, too. It really tastes like a salsa, this dip of sorts, only with an earthy, greyish eggplant body. After the great big bowl I brought to a party was almost eaten up, one guest decided to bring home the last cupful so he could make sandwiches with it another day. Vegetarians, vegans, and would-be eggplant haters alike crowded around it, addictively scooping, as you should at any party’s chip-and-dip station. Give it a whirl at yours this Labor Day weekend, and don’t be shy about adding extra goodies to the mix, like fresh corn and peppers, perhaps.

Trim the stems and slice the eggplants in half lengthwise. Deeply score the flesh of the eggplant’s cut side with a paring knife 2-3 times lengthwise, being careful not to break the skin. Generously salt the cut sides of the eggplant and let sit at room temperature for 20-30 minutes.

Preheat oven to 400 degrees. Squeeze the eggplants to remove the juices that rise to the top and rinse with water. Squeeze well again, and pat dry with paper towels. Coat the eggplants with 2 tablespoons of the olive oil. Place cut side-down on a baking sheet and roast for 15-20 minutes, or until the eggplants feel completely soft to the touch. Remove from heat and flip the eggplants over to allow them to cool faster. Once cool enough to handle, carefully peel the skin from the flesh. Place the pieces of flesh in a colander and let sit 15-20 minutes to catch any extra brown juices.

Coarsely chop the roasted eggplant flesh and combine in a bowl with the chopped tomato, peppers, scallion and cilantro. Add salt, pepper, and the lime juice to taste. Stir in the remaining 2 tablespoons of olive oil, or more if desired. Serve immediately or chill and store for up to 2 days before serving.

Four brownie points: You don’t have to grab a pack of premade, preservative-addled babaganush to enjoy an eggplant dip. With the basic roasting and peeling techniques here, you can make that classic dip with tahini, or a spread similar to this. Fresh tomatoes and lots of citrus juice will provide Vitamin C, and eggplants are known to have fiber, potassium, and cancer-preventing antioxidants, as well as having few calories.

Eight maple leaves: The citrus juice and olive oil were just about the only things that weren’t found locally, in season, this time of year. It’s a good time for eating.