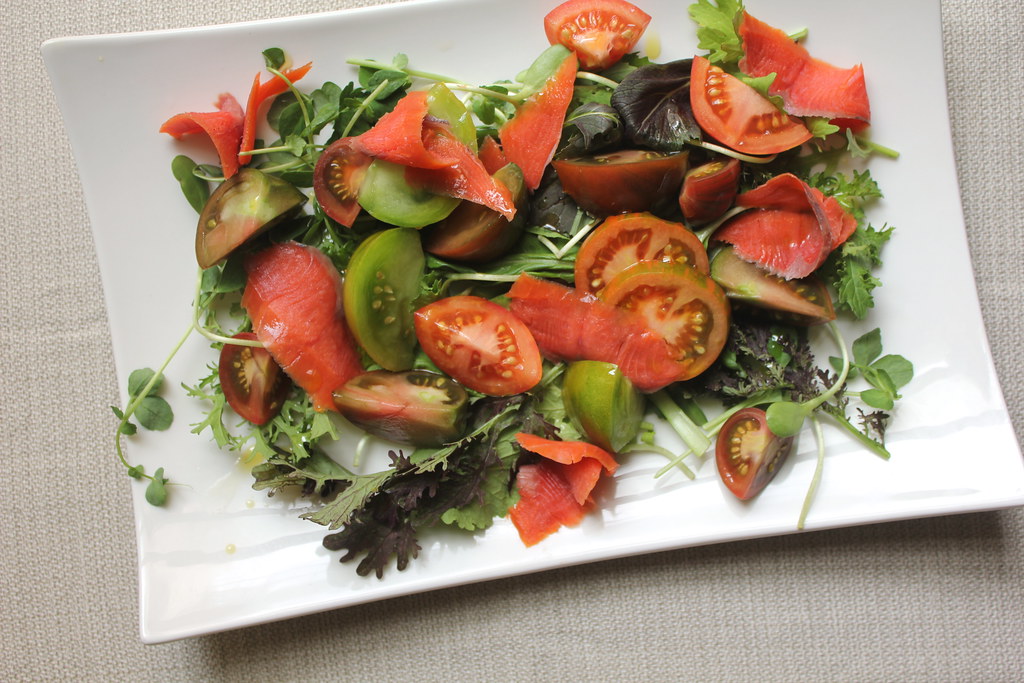 Do you ever edit yourself, after something’s been said and done? After you’ve cleaned off a meal that you enjoyed to its fullest, then start believing that it wasn’t all that it could be? I have this compulsive habit sometimes, and right now I’m really wishing that I’d scattered crisp red onion across this dish, like slivers of orchid petals. And maybe pinched speckles of Maldon sea salt and black pepper on top of those tomatoes and lettuces, and–eh… it was still good. Let your imagination make it even better after trying it, too.

It’s the right time of year to enjoy tomatoes, this late summer. Full and sweet, they’re falling off their branches in rainbow colors, often on the same fruit. Heirloom tomatoes are a remarkable trend that has expanded in scope over the last couple decades thanks to crafty farmers who’ve been saving and adopting their seeds (I remember just five years ago serving a canape with multi-colored tomatoes at an event, and the guests thinking that they weren’t ripe). There is no must-have for multi-colored tomatoes here, of course, as any ripe, fleshy and flavorful summer tomato will be great for serving fresh. But heirloom tomatoes often indicate that it’s all that plus some color, which is nice to see on a salad plate. 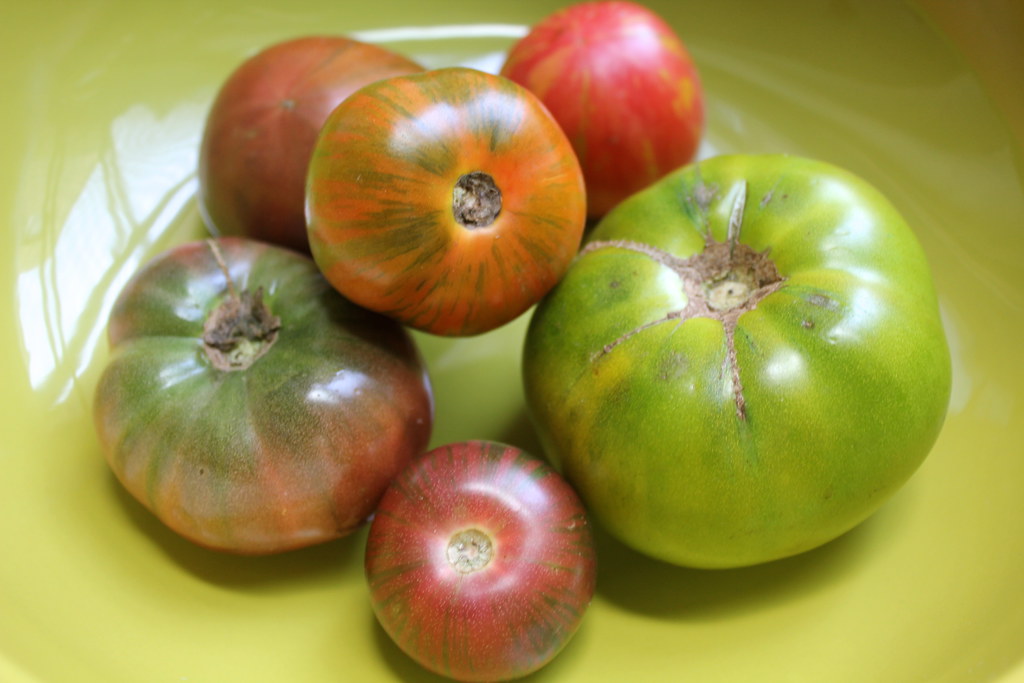 I picked up these baubles from Evolutionary Organics at the Greenmarket, along with the spicy microgreens. There were too many varieties to remember, but I loved reading a bit about each tomato on the hand-written cards on the market bins (and on the trays of seedlings, which were available earlier this summer when I picked up one of the “Green Zebra” plants for my fire escape). The plant is not doing too great, for unknown reasons. It happens. 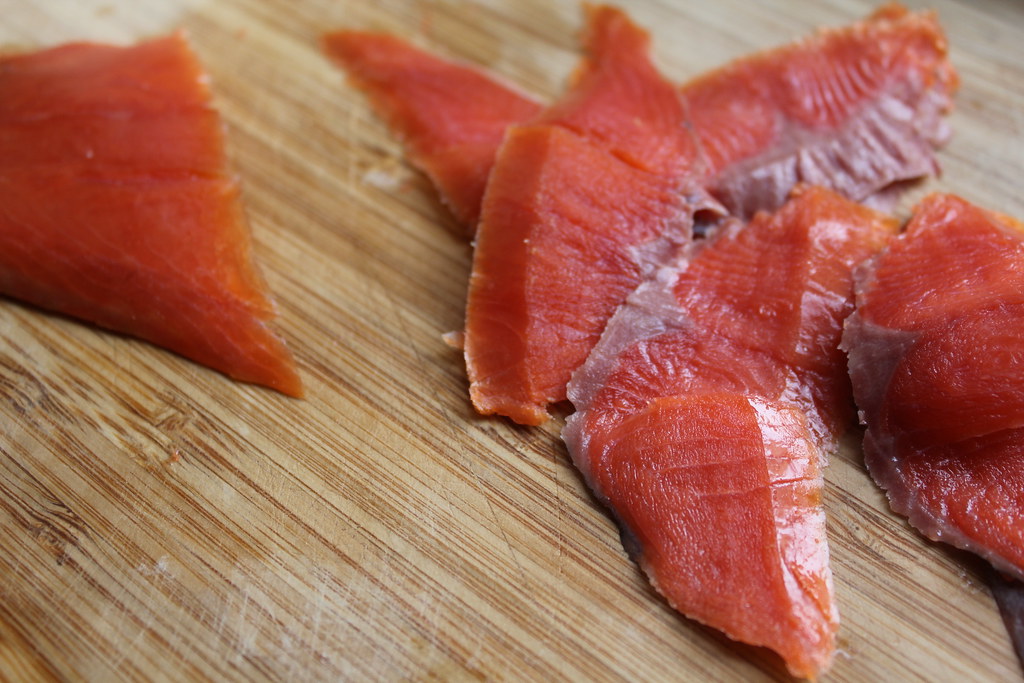 How red was my salmon. It’s not really my salmon, because even though I paid for it and picked it up from a certain salmon CSA in the city, I know the people who caught the fish off the waters of Alaska, smoked it, and flash-froze it. So it’s their salmon. I just happened to get in on it. (For that matter, these aren’t my tomatoes or microgreens but Evolutionary Organics farmer Kira Kenney’s.) For the last few summers, Christopher Nichols of Red Hook Winery and his wife Emily have been at this habit during salmon fishing season, catching and bringing back fillets for us city-folk at drop-off locations. They catch wild Alaskan sockeye (or “red”) salmon up there. A couple years ago they smoked some, and I just found one of the unopened packages of it at the bottom of my freezer while in anticipation of another batch of their salmon in September. Seriously, what was I waiting for? I’m planning to make a creamy salmon dip with dill using the rest of this thawed fillet soon. Any other suggestions are welcome.

I’m not sure why salmon and fresh tomatoes aren’t seen served together more often, but a bed of spicy, peppery baby greens made it so appealing that it was a holy trinity for me. I think that the sweetness and slight acidity of the tomatoes coats the pungent, oily fish well and vice-versa. So much so that, when eaten in combo, you don’t really need to shake any salt onto the vegetables. It depends on how much salmon you use, perhaps. The crisp leafy greens were well appreciated in this mix to add contrast, especially when glossed with good olive oil, so don’t skimp on this portion like I did initially. Again, you don’t have to use heirloom tomatoes or “red” salmon or even precious microgreens to make a salad in this vein using ingredients that are locally available to you. But if you’re in New York like me, this is my one-two-three recipe to divinity.

Sprinkle the tomato wedges with the salt and pepper. Toss the lettuces gently with about half the olive oil and a squeeze of fresh lemon juice. Arrange the tomatoes and lettuce on serving plates. Twirl the salmon slices into small bunches and arrange on top. Drizzle with the remaining olive oil, another squeeze of fresh lemon, and serve immediately.

Four brownie points: This is a light starter course, not an entire meal itself (although if you want to place its ingredients between two slices of toast, it could make a good sandwich). There’s a lot of sodium in smoked salmon, as with any cured fish or meat, but along with it comes omega-3 fatty acids found in the fish, to help balance bad cholesterol. That along with a few drizzles of heart-healthy olive oil, and it’s a pretty lean salad course. The sharp, bitter greens will help detoxify your system, too.

Seven brownie points: The tomatoes and greens were freshly picked from a local farm, but the salmon came from across the country in the Pacific Northwest. If you’re going to eat salmon however, this fishery boasts excellent marine stewardship, earning a “best choice” rating from Seafood Watch.