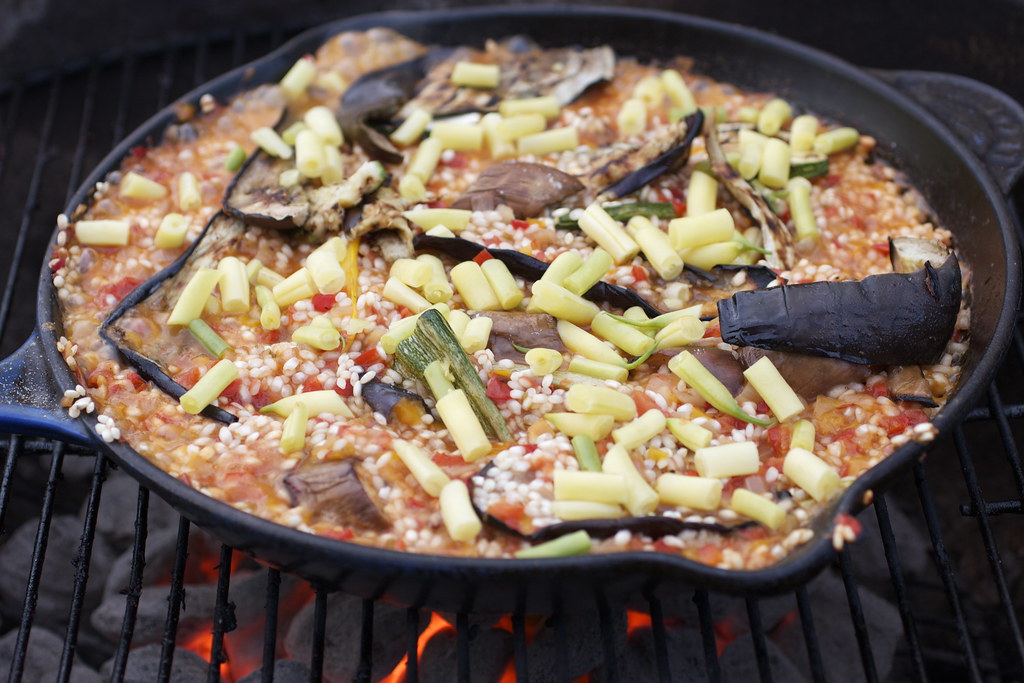 Last summer, ten friends and I kissed the summer goodbye with a beach weekend and a clambake. I wrote afterward that there was no greater communal food activity than this, if you’re by the shore with many people. I take that back just a little. Because for all the seaweed we let sizzle on molten-hot rocks, and crustaceans that reddened atop those before cracking open, there is another awesome group food that should not be overlooked in the summer: paella.


It’s not as difficult as it seems. Nah, I don’t have a paella pan, but a large cast-iron pan placed atop hot coals evenly spread on a barbecue does the trick of creating crusty rice on the bottom nicely–the soccorat. The taxing part may be cooking the sofrito, a chopped medley of peppers, onion and tomato until a thick sludge. This was done a few days before the paella was put together. Highly recommended if you want to cook the paella at your party. 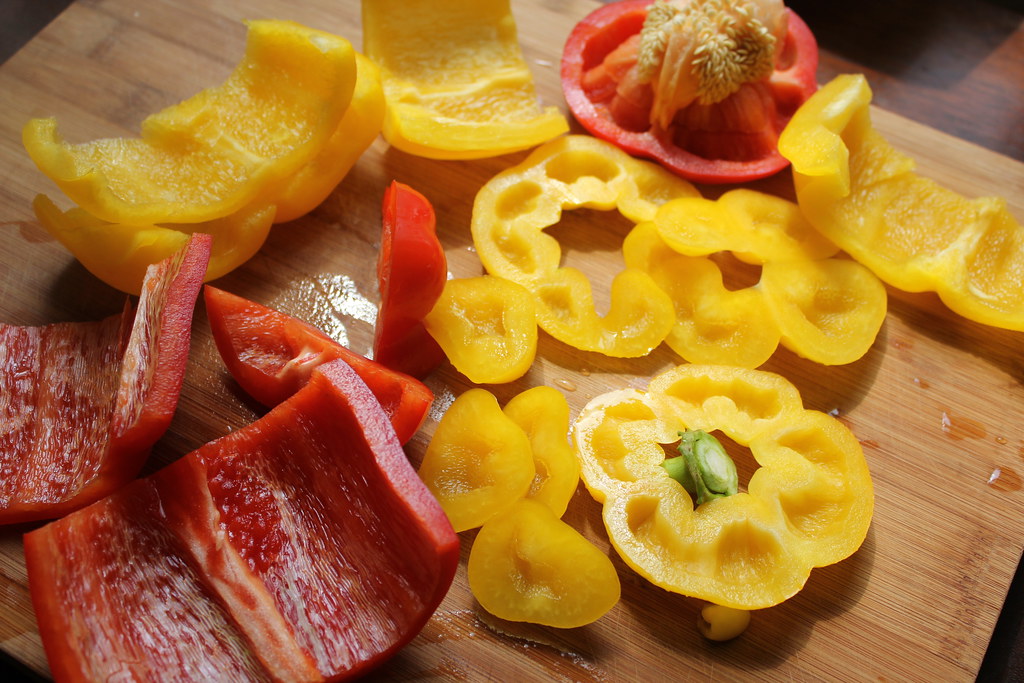 You don’t see paella on too many restaurant menus in the States because it just isn’t a very single-portion friendly kind of meal. It’s the kind of dish that enjoys being made en masse, in a wide, open pan to dunk several types of seafood into. Then, you don’t see it cooked at home very often either, because this means having a big crowd–and leftover seafood is never as appetizing reheated the next day. You’ll also want saffron, that expensive, hard-to-find yet quintessential spice that dyes the rice yellow when crushed and sprinkled atop. You’ll want to make seafood stock with all the shrimp shells and fish heads that you’re using for the dish as well, to cook the rice with.

But you don’t need all this after all if you’re going to make a vegetarian iteration of paella. It even saves well for repurposing in other dishes the next day, as we found out. Last weekend, we had twelve friends on our weekend getaway, so we made one seafood paella–with clams, shrimp and oysters foraged on the beach (more on that). And one vegetarian paella for those at the beach who were either allergic or vegetarian. Using the same sofrito, short-grain rice, and spices like saffron, these two pans were put out in less than an hour. 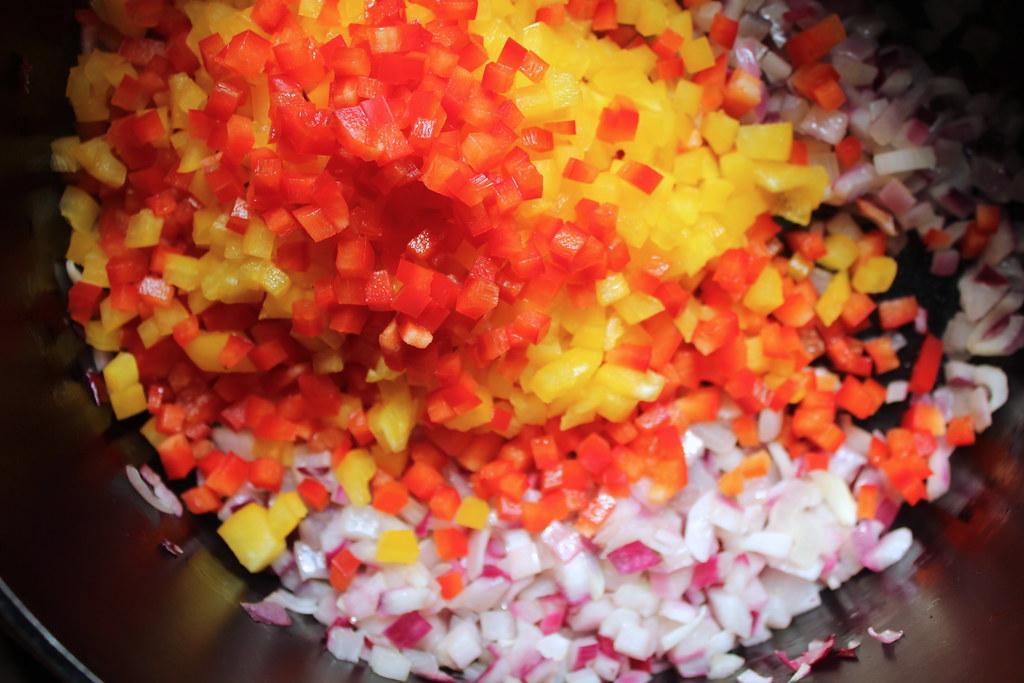 Gluten-free folk at this party were well-served by paella, too, since the filling rice is just that. And tasty. I’d gotten the classic Spanish Bomba rice for the occasion at a specialty grocery, which came in an attractive cloth bag. But I’ve seen recipes for paella that called for any type of short-grain white rice, even Arborio, so long as it isn’t too sticky like sushi or sweet rice. The day before I left to hit the beach for the weekend, I chatted with a co-worker about my paella plan, and learned during the conversation that he actually hailed from Barcelona. He approved of my description of simmering the sofrito for four hours ahead of time, and he gave a warning about getting too much soccorat because I was using a cast-iron pan. He worried that it would burn. We also talked about sangria, which I was planning to serve in pitchers to go with the paella. I asked him if I really had to add Fanta or some other sweet soda, like I’d seen done when I was in Barcelona ten years ago. No, he answered, suggesting some homemade lemonade in addition to fruit and red wine. But that’s just the Spanish way, he admitted. 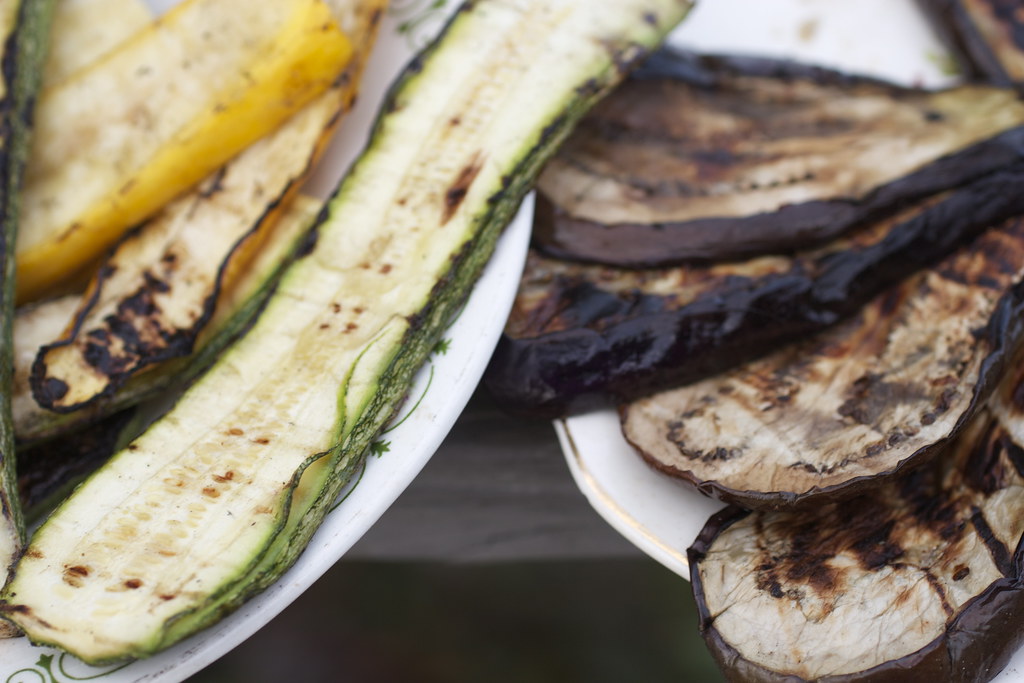 He wasn’t my only mentor in paella-making, however. For the past several years, my friend June of GrowNYC’s Greenmarket program hosts an annual summer paella party in her backyard. I went to this year’s party just a few weeks ago, and although I enjoyed it to the last grain on my plate, I knew I wasn’t quite finished with paella for the season. June has made a vegetarian paella before, which gave me courage to try it out as well. I’m sure hers would have been more elaborate and practiced, involving all manner of vegetables in season, or wisely frozen from the spring, like shelled peas. But mine had grilled eggplant and summer squash, which was torn up before throwing into the bubbling pan of rice. Some chopped, fresh yellow string beans were sprinkled atop (to make up for the frozen peas which I’d forgotten to bring). Parsley showered the finished dish, and it tasted distinctively of the white wine that I’d poured into the rice just as it was finished toasting with the sofrito. 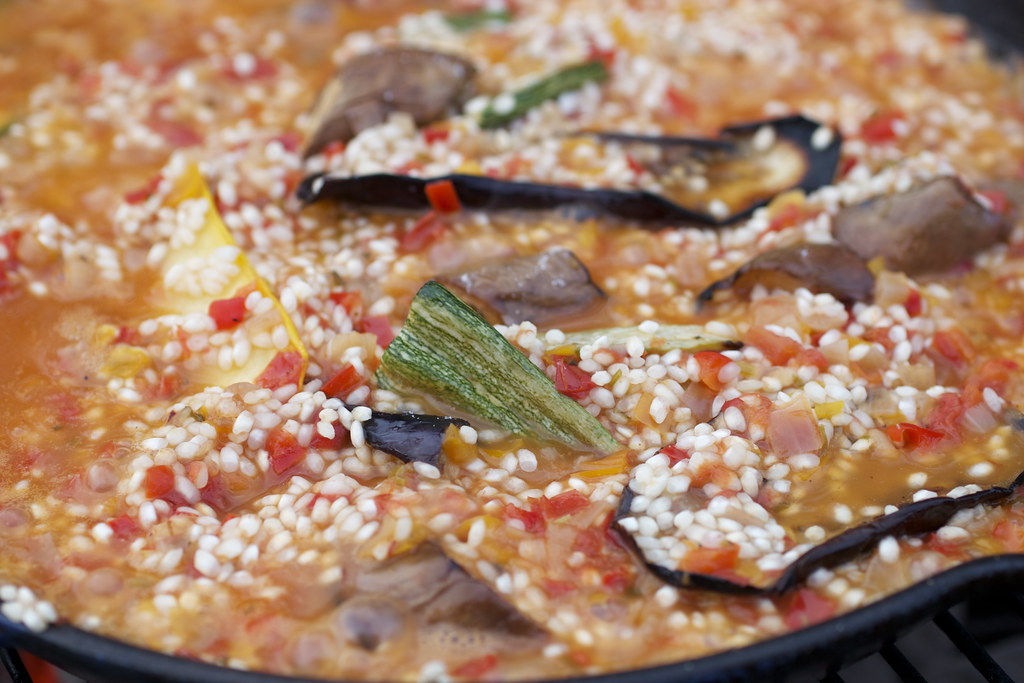 The best part about the vegetarian paella, though, were the leftovers that we ate over the rest of the weekend. The next morning, panicked about having too much leftover veggie paella (we threw a bonfire on the beach and when someone started playing blues licks on a guitar I’d begun singing about having the “leftover paella blues”), I browned only a few of the potatoes I’d meant to make hash browns with, then folded in the paella to make a sort of paella-hash hybrid as part of breakfast. This with a runny fried egg on top was my soul-soothing breakfast alone. 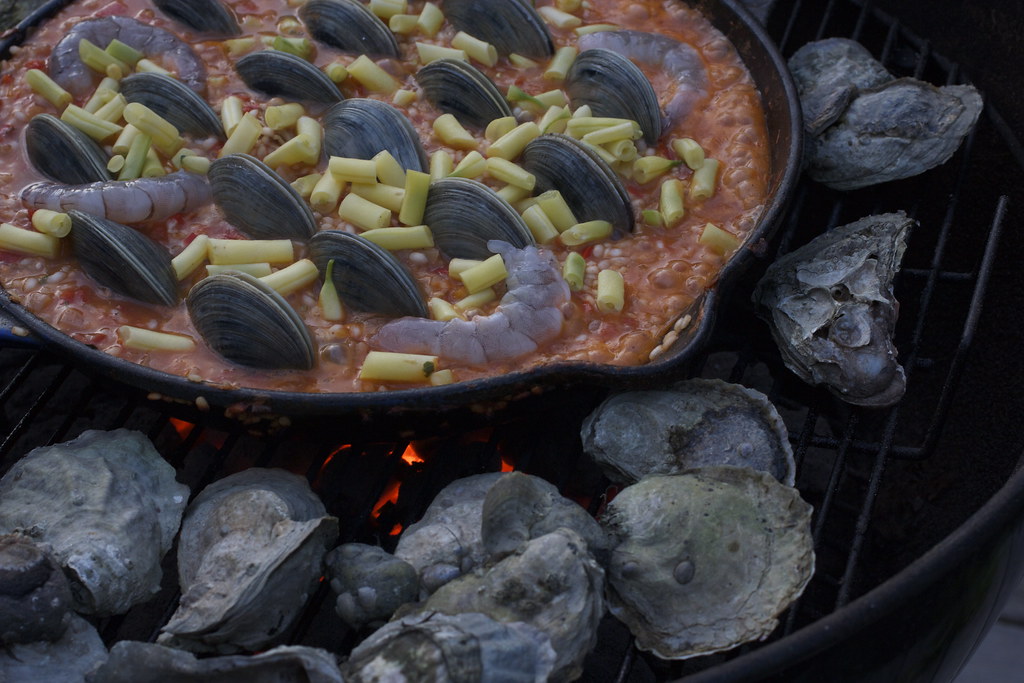 Last but not least, each meal that we cooked last weekend came with a certain indulgent appetizer: oysters. I don’t know why I’ve never seen them before, but the stretch of beach we were staying on at the Connecticut shore had a bay that was teeming with the bivalves. Literally. Once we discovered them haphazardly on a long walk along the beach, Laena and I couldn’t stop going back to grab bagfuls more. We couldn’t find an oyster shucker at the cottage we were staying at, so we just placed them on the grill ’til they opened up, warm and juicy. We even dragged more friends to forage them several times, roughing up our feet as we picked (oysters are sharp!). Somehow, in the midst of all this ecstatic eating, cooking and collecting, we completely neglected to do another clambake. Beach weekends are way too short.

Special thanks to Chitra for lending her camera to me last weekend to snap pics with, as I’d forgotten mine.

Note: For even, rapid cooking, it’s best to place the pan directly atop a hibachi grill when the coals are at medium-strength heat (not blazing hot, but not dying down either). You can use the time when the coals are very hot to grill your eggplant and zucchini.

for the sofrito:
Heat the olive oil over a medium-high flame in a large pan and add the onions and peppers along with a generous pinch of salt. Stir occasionally until mixture is sizzling, about 2-3 minutes, and reduce heat to low. Cook on low heat, stirring occasionally, for 8-10 minutes. Add the tomatoes and garlic and continue cooking, stirring occasionally, for at least 1 hour, or until the mixture resembles a thick paste. Can be made and stored in the refrigerator up to 5 days ahead.

to make the paella:
Ensure that the grill’s coals are spread evenly so that when the pan is placed on top of the rack, heat is below its entire surface.

Place the pan on the grill and add the sofrito. Stir until hot and bubbling, about 1 minute. Add the rice and stir to incorporate evenly, another minute. Add the wine and let boil, stirring occasionally. Add the salt, pimenton or smoked paprika, and the saffron and stir. Add the stock and stir to incorporate. Let the rice cook uncovered at a steady boil for 15 minutes, stirring occasionally (if rice seems to be sticking to the pan, stir more frequently). Add more stock if the pan is becoming dry. Taste for seasoning, adding salt as desired. When the rice is almost cooked but still a bit firm, scatter the zucchini and eggplant pieces atop the rice and cook another 5 minutes, without stirring. Scatter the peas or green bean pieces atop and cook another 2-3 minutes. Remove from heat and set aside to cool for 5-10 minutes, allowing the rice to fully absorb the liquid. Scatter the fresh parsley on top, and serve immediately.

Five brownie points: This vegetable-studded rice dish is low on fats, but has plenty of flavor thanks to a robust, slow-cooked sofrito and smoky, grilled fresh vegetables. You can add many types of veggies that are in season instead of (or in addition to) the zucchini, eggplant and string beans to vary its nutritional profile more. Lots of fresh parsley helps add detoxifying leafy-green nutrition, so don’t skimp on it. Even though it’s essentially a rice dish, you can load up on the vegetables for an even ratio of starches to veggies.

Six maple leaves: This is a great way to use up odds and ends of vegetables that people so commonly have laying around in the summer—slightly squishy tomatoes, pieces of peppers, and leftover grilled vegetables to stir into the rice. The rice and spices may be imported, but everything else can be found at a summer farmers market.