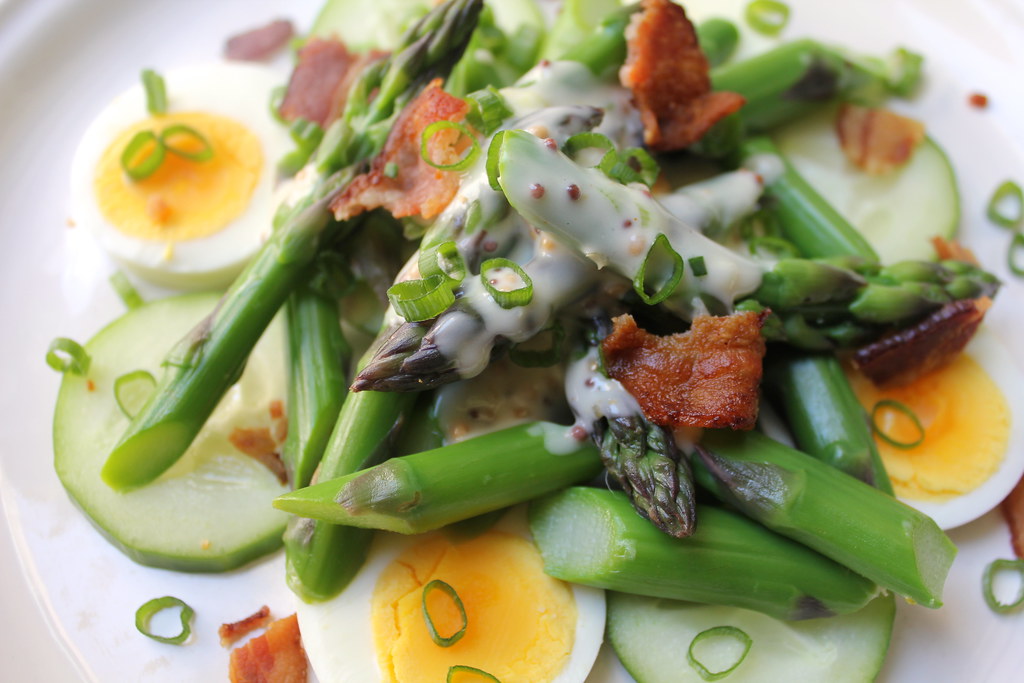 I’ve been seeing a lot of folks drinking green smoothies these days. By folks, I mean women, for the most part, and those living in NYC, by geographical default, and, in particular, again by sheer observational default, those coming from and going to their offices for a morning or midday pick-me-up-instead-of-coffee. So I feel a sort of social pressure being of this class to partake in green smoothies (or juicies), too. But I prefer to eat, not drink, my greens. And I can think of one healthy green vegetable that would never be squeezed raw into a beverage.

Asparagus. We all love it these days, but drink it? No, ma’am. Asparagus is one plant that I much prefer with a snap of texture and natural sweetness that’s brought out by cooking gently. Besides, it looks so fresh and cheerful, especially the first stalks of the year. 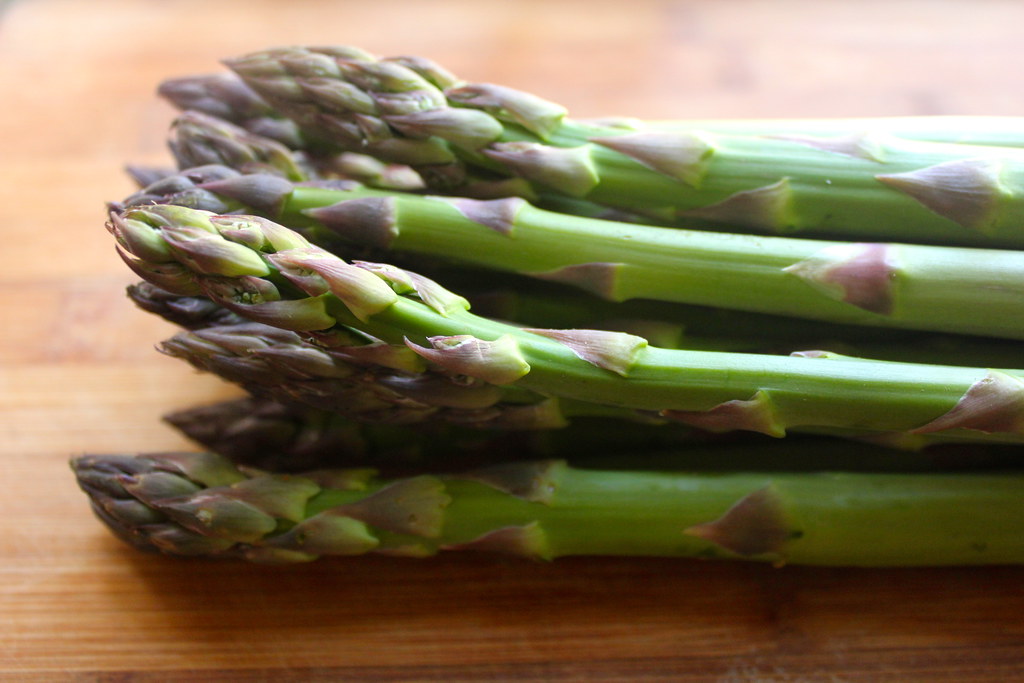 The season for asparagus has just begun, and for the first stalks from Kernan Farms in NJ, brought to the Grand Army Plaza Greeenmarket last weekend, I wanted to preserve their crisp newness by lightly blanching them for a salad. Roasting and grilling can wait for another weekend. Another surprising find from the Greenmarket was a new, seedless cucumber, whose bright, kelly-green surface was nothing like the thick, lizardy skin of waxed specimen from the commercial market. 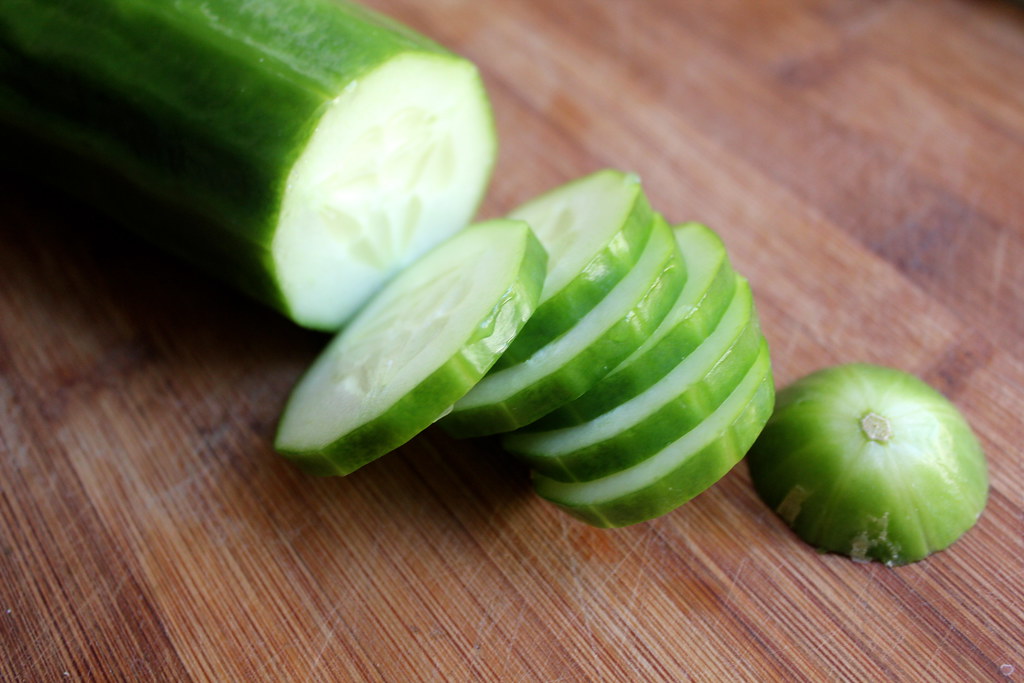 Asparagus and cucumber might go nicely together with a refreshing vinaigrette, but I wanted a salad that could work as a complete breakfast. So I gave them a savory, filling boost with some hard-boiled egg and bits of bacon. Instead of a warm hollandaise to drench the stalks with, in French fashion, I whisked a tangy yet creamy dressing speckled with whole-grain mustard seeds. 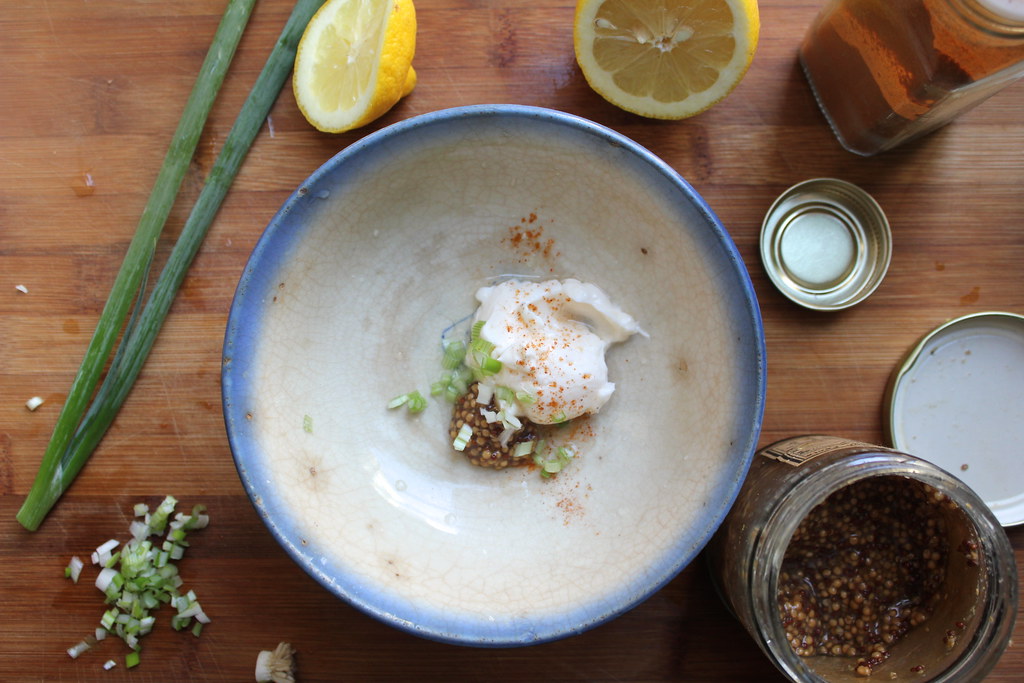 Blanching asparagus takes no more than thirty seconds, or less if your stalks are very thin. Just a dip in boiling water to bring out the greenness of the stalks, before dunking into an ice bath. In just these few seconds, the vegetable transforms, losing its fibrous texture and deepening in color. You can smell a faint weird, funky sort of bitterness in the hot water as you pour it down the drain. The resulting asparagus is deeper in color and still snaps a bit if you break them; its interior is no longer chalky-white but a juicy, pale-greenish, sort of like that seedless cucumber, sliced. 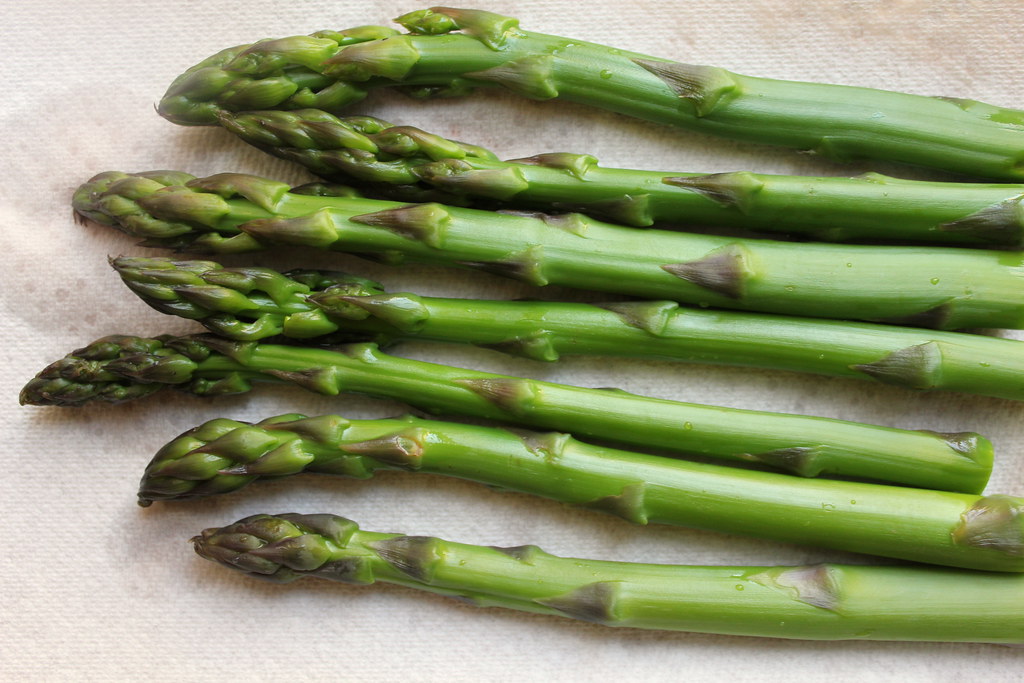 Coated with a little dressing, the asparagus complements with an earthy taste of spring. It’s definitely a more in-your-face way to experience their natural flavor, compared to charring them on a grill. But compared to crunching on raw, fibrous stalks, or — god forbid — sipping of cup of green asparagus juice, it’s an easier way to ease into asparagus season. Get them while they’re really good.

Bring a pot of salted water to a boil. Prepare a bowl of ice water on the side. Dip the asparagus in the boiling water and cook for 20-30 seconds; remove with tongs and transfer immediately to the ice bath to cool. Once cooled completely, drain and pat dry. Place the bacon in a skillet and cook over medium-low heat, covered partially to prevent splattering, for about 2 minutes, or until very crisp on the bottom. Flip carefully with tongs and cook opposite side for another 2-3 minutes, or until crispy. Transfer to a paper towel to cool.

Whisk the mayonnaise, lemon juice, mustard, olive oil and the chopped white and light green parts of the scallion. Season with salt, pepper and the optional cayenne pepper to taste.

Cut the blanched asparagus to 1-inch logs on a bias. Toss with about 1 tablespoon of the dressing. Arrange the cucumber and hard-boiled egg slices on serving plates. Pile the asparagus on top of each, and drizzle with the remaining dressing. Garnish with the sliced green parts of the scallions and crumbled strip of bacon and serve immediately.

Cost Calculator
(for about 2 servings)

Five brownie points: This dish swaps out the heavy carbs that often come with breakfast and brunch courses for more veggies. But they’re given some pretty rich trimmings with the bits of bacon, egg and thick dressing. In any case, asparagus are a great source of plant-based fiber and protein, along with typical green vegetable vitamins like Vitamin K, A and C. Keeping the skin on the cucumber (easy to do when they’re a thin-skinned variety that hasn’t been waxed) retains their vitamins, too. You’ll get some cholesterol from that egg and bacon, but think of them as side attractions, for flavor and richness, rather than the main stars of the dish.

Seven maple leaves: Using what’s in season or available year-round locally from the farmers market and the fridge (like the condiments in the dressing), this is a true spring recipe. Not much in the way of summer fruits and tomatoes have arrived yet, so the limited choices can be fun to experiment with and combine.