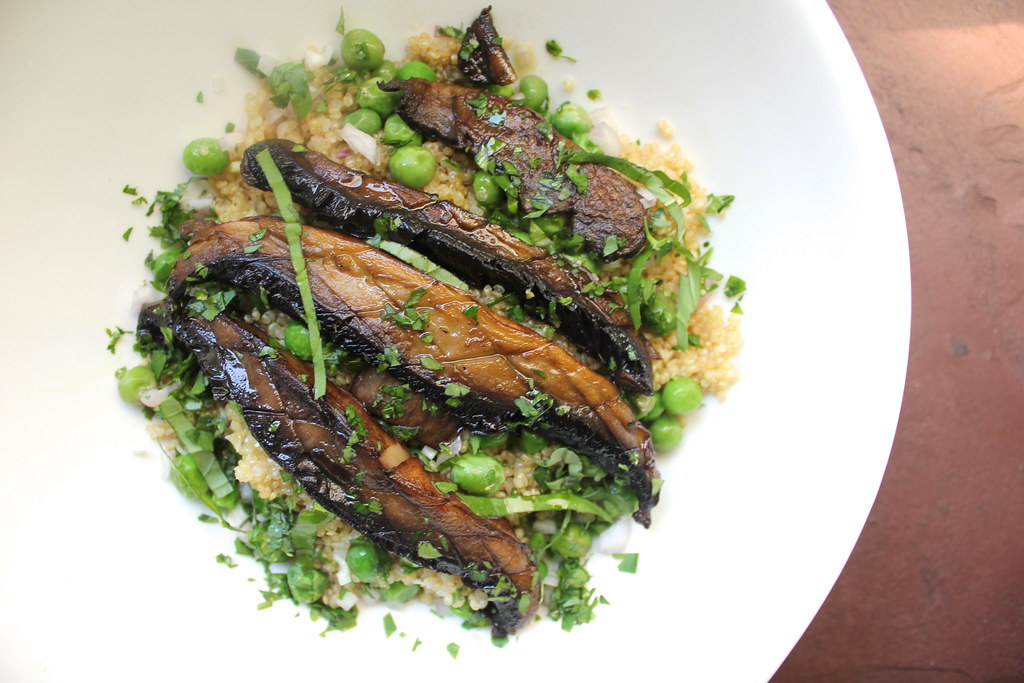 Doesn’t the sound of mushroom risotto just pull you by the tastebuds? Creamy rice, earthy morsels of mushrooms, and often sweet peas buried in between. This luscious dish appears on so many restaurant menus as a standard option, perhaps due to its vegetarian-friendly disposition, and I’m tempted to make it on chillier nights when I feel like eating somewhat “light.” But it requires patience, attention, and some good stock to cook well, three things I don’t always have on weeknights.


Risotto doesn’t require, but is commonly drowned in butter or some other rich dairy products by chefs to avoid blandness. I’ve got a few different solutions for that, which has resulted in an entirely different, deconstructed dish from its inspiration.

1. Choose A Different Whole Grain: Something you don’t eat often, so the novelty factor will add excitement. I went with quinoa, which is actually a seed, but cooks quickly to a nutty-tasting fluff. This was the most time-efficient option I could think of — save for couscous, which is not a grain but tiny semolina pasta. Quinoa is also exceptionally nutritious. If you’re up for a longer spell at the stove, here’s my recipe for “risotto” with spelt. 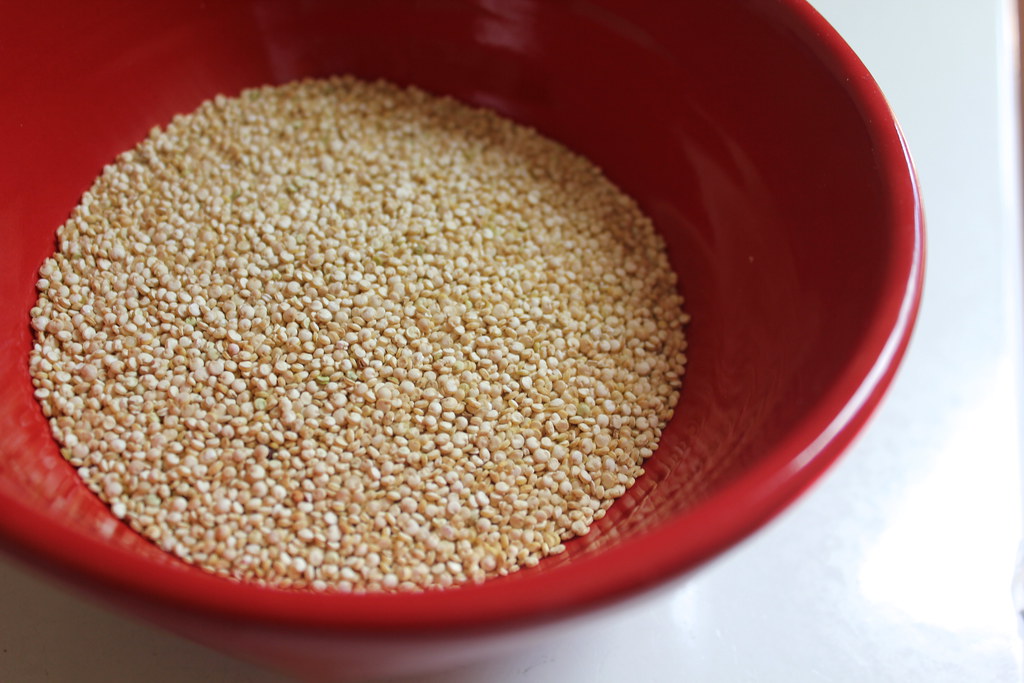 2. Build Flavor by Searing: No sad, soggy bits of mushrooms this time around; I went for fat strips of portobello, which were lightly scored before searing on a pan. The scoring part just adds more edges to the surface that will become crisper. Giving mushrooms a good sear in any case brings out their rich flavor and adds textural contrast. 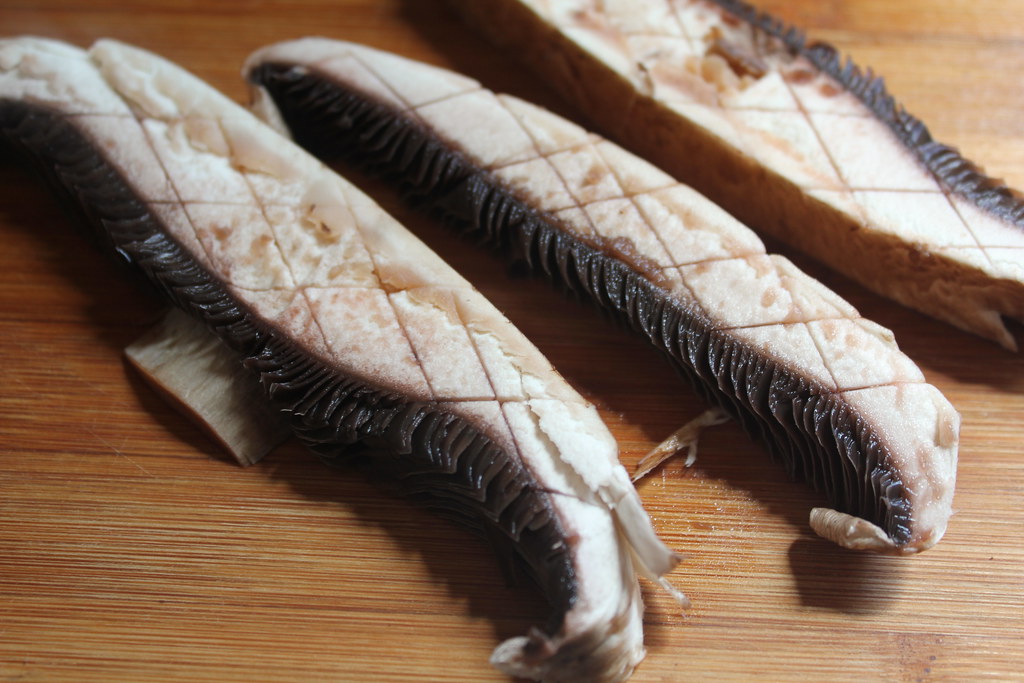 3. Try Crisp Shallots Instead of Softened Onions: Sweating chopped onions in butter or olive oil over low heat until translucent is one major time-suck in making risotto. It’s like a ritual that, once you get past this stage, the illusion of eating soon has been dashed. I’ve been there many times, resigned to my fate of standing over the stove for some time. But I’ve grown an appreciation for crisp, fresh tidbits that take no time to cook like shallots, which are milder and sweeter than large onions and a little of them goes a long way. This ingredient veers the final dish a little toward a quinoa salad or pilaf, as its flavor is not really integrated in the grains.

4. Heap on the Fresh Herbs Instead of Butter: Why stop at a sprinkle of parsley when you’ve gone and purchased a whole bunch, or have a plant bearing leaves ready to pluck? Pile on the green, flavor-enhancing goodness then, and mix it up with more types, like oregano, thyme, mint, sage, chives, or basil, like I’ve added here. (My spring herb pots are sitting pretty now; we’ll see how they hold up through the summer.) 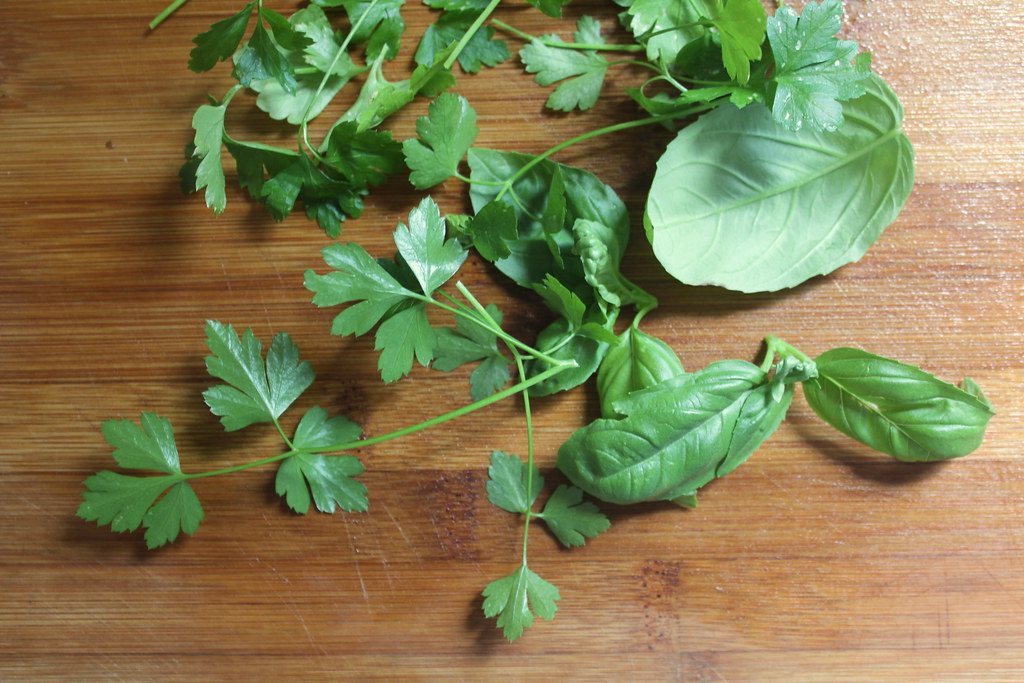 5. Add A Squeeze of Lemon: Okay, this might be officially a salad rather than anything close to a risotto, but a dash of fresh lemon juice really spruces up most anything. Especially meaty, browned mushrooms, which have no acidity of their own. Just another way to avoid barraging your dish with butter and build dimension. I just wish lemons weren’t so dang expensive on the East Coast.

In the end, we’ve come a long way from creamy-textured, pallid-colored risotto (and I do say that description in an endearing way). Instead, we have a warm quinoa dish with big chunks of mushroom and colorful contrasts, which took about ten minutes to make. We’ve also accomplished adding more protein (thanks to the quinoa, and plenty of peas) while making it not only vegetarian but vegan-friendly. This one certainly makes up for the Cinco de Mayo parties I attended over the weekend (did I mention parsley is very detoxifying, too?). Hope it’s a great fix for your time constraints and healthful aspirations in the kitchen, too.

Bring the water and ¼ teaspoon salt to a boil in a small saucepan. Add the quinoa and stir. Reduce heat to a low simmer and cover. Cook 6-8 minutes, or until the water has been absorbed. Stir and set aside.

Gently score a cross-hatch pattern onto one side of each mushroom slice. Heat the 2 Tb oil in a heavy-bottomed skillet over high heat until very hot. Place the mushrooms scored side-down in the oil and let cook for about 1 minute. Sprinkle with salt and pepper. Peek underneath, and once the bottom sides of the mushrooms are golden-brown, flip to brown the opposite side, another 1-2 minutes. Remove from heat and set aside.

Meanwhile, bring another small pot of water to a boil and drop in the peas. Cook 2-3 minutes, or until peas are just floating and deeply green. Drain.

Toss the quinoa with about half the chopped shallots, peas and fresh herbs. Season with salt and pepper to taste and stir in about half the lemon juice. Assemble the mushroom slices and remaining peas on top, and garnish with the remaining herbs, shallots, lemon juice, and optional drizzle of olive oil.

Two brownie points: Full of fiber, folate, iron and protein, quinoa is a great grain – er, seed – to get familiar with. It’s such an easy substitute for rice and other grains that take longer to cook. You’ll also get protein from the peas, and plenty of vitamins and minerals from the copious amount of fresh herbs. This is a spring power meal, with no cholesterol and low fats.

Six maple leaves: Pantry staples, frozen foods, and homegrown herbs help out when there’s fewer fresh produce in season. That should change pretty soon in New York City, but for now, some gnarly roots and mushrooms are still kicking around.