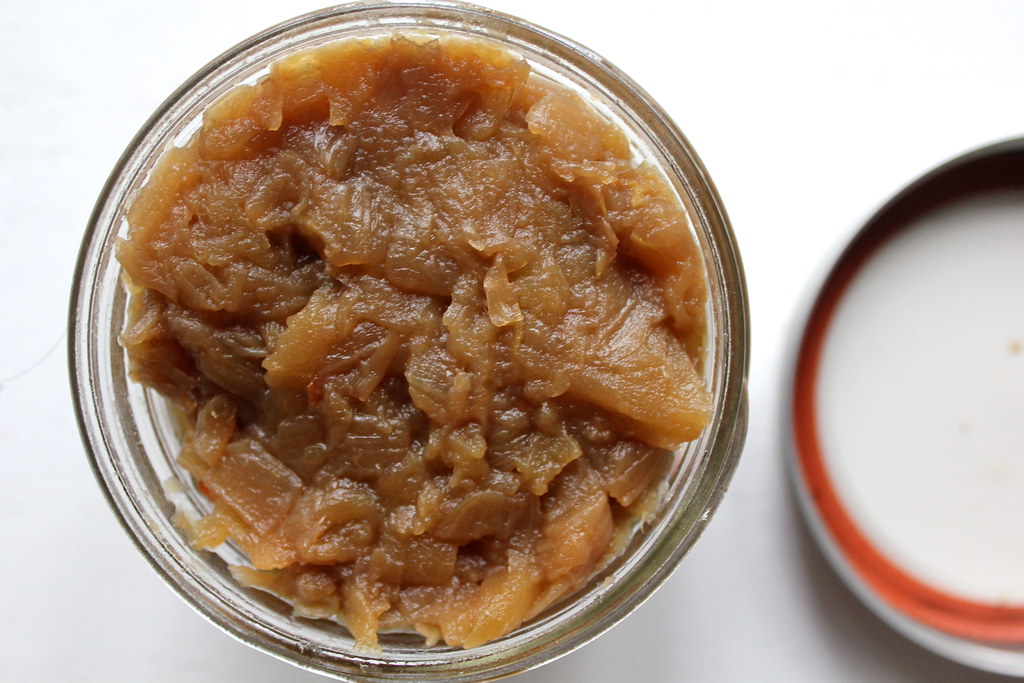 I wasn’t sure what to call this condiment — it is a jarred, preserved sauce (so it could be called simply “preserves”). But it doesn’t have to be; it could also be used immediately, like any old sauce. It’s sweetened with sugar so it could be a jam, but it has enough savory complexity to qualify (I think) for a chutney. It also has a strong dose of vinegar so it might as well be an agrodolce — the tangy, condensed, Italian preparation of such vegetables as onion and squash. Sweet, sour, thick, jammy, I’m gonna go with “relish.” The connotations behind “relish” are specific in some parts of the country — in Chicago this is a chunky sauce of minced cucumber bound with a sweet-and-sour slurry. But I like the word. You can relish this sauce, using the term now as a verb, which you can’t do with “chutney.” The verb versions of “jam” (to smash?) and “preserve” (to save) are not as delightful, now are they?


I am not as well-versed in Italian to know whether or not “agrodolce” can be used as a verb, but I’m pretty sure it can’t. This word is a conjunction of sweet and sour. Yes, you can “sweet and sour” something if you’re going to use it as a verb, but that’s darn awkward to say. Forget it.

But enough about all the ways you could name this spread/sauce/thing, what of all the ways you can use it? I can think of one that jumps to mind: slicked onto a still-hot out of the oven crostini, perfumed heavily with olive oil, and topped with a folded slice of prosciutto. Or, as a sweet dollop for a grilled chop of lamb, with roasted root vegetables scattered about the plate. Maybe just the nooks and crannies of a toasted English muffin, swimming with melted butter already, would be a good place for this slightly savory, scantily spicy, and vegetal sweet jam. Maybe you could top cookies studded with aniseseed with it, to bring out the fennel, or maybe you could spread it inside a ham sandwich with cheese. You decide. 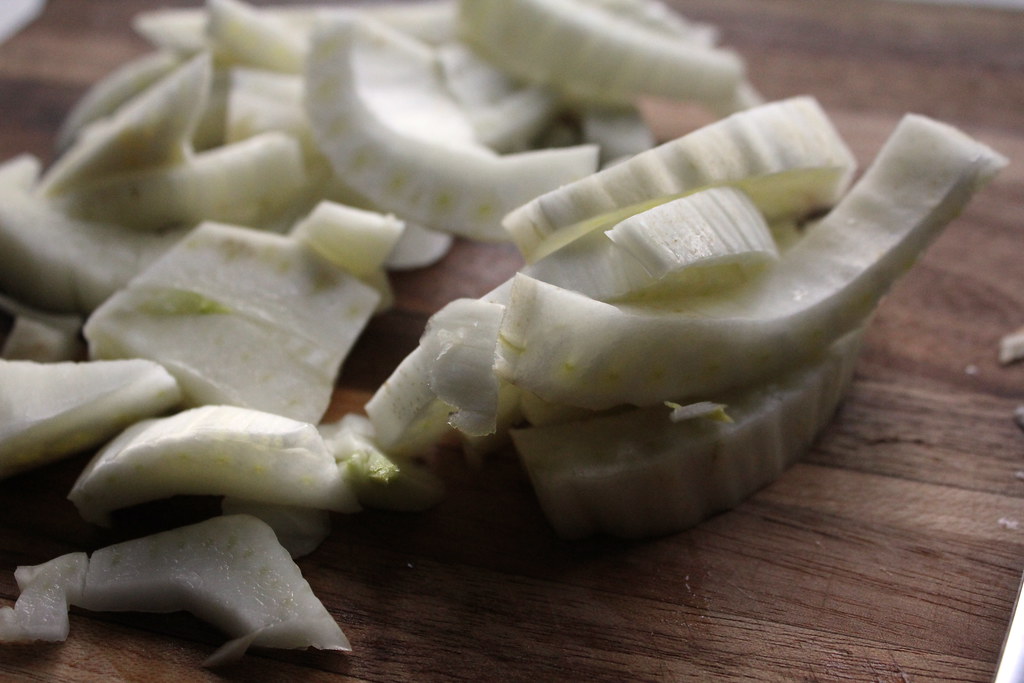 
Sweet and tangy jam-like sauces are not only a great, intense flavor complement for wintery foods, but they’re also a classic substitute for the ripe flavors of fresh, summer produce. The addition of vinegar is necessary to keep it in a jar without going bad, but it also adds a brightness that’s not otherwise found in the case of fennel, apple and onion. I sprinkled just a pinch of red chili flakes into the concoction as it bubbled, for only a suggestion of heat, and because they looked pretty besides. Sugar was added to help create a thick, caramel consistency, although all three ingredients (fennel, apple and onion) don’t need too much help to bring out their natural sugars, so long as you cook them low and slow. 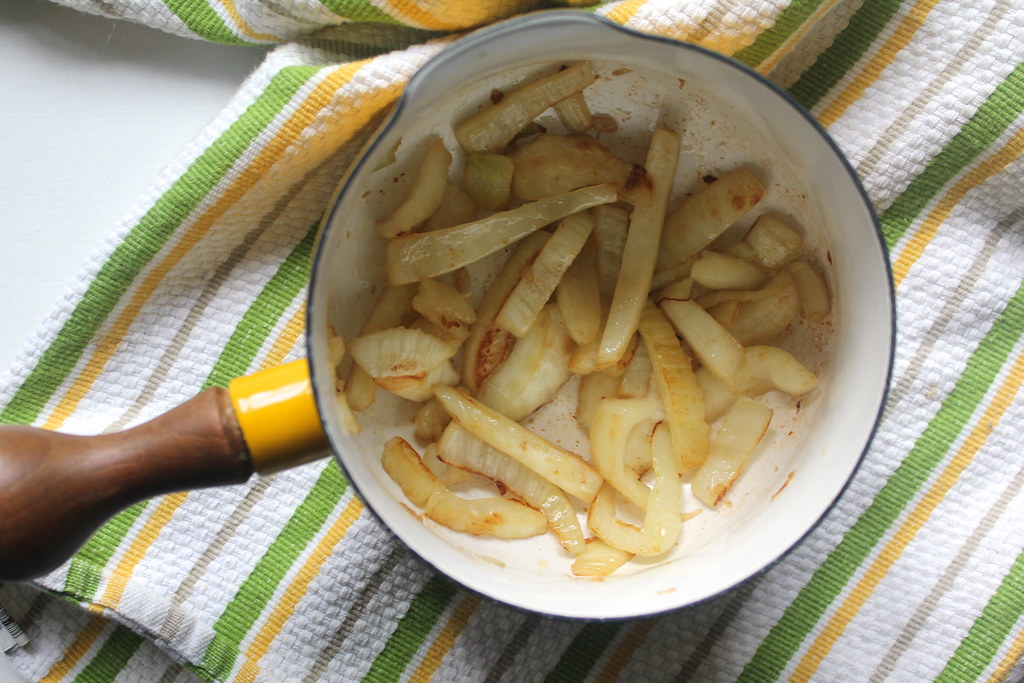 fennel is caramelized first since it takes longest to cook

And a long, slow simmer these ingredients did get. It’s kind of like making apple butter (hey, there’s another possible word to use!), in that you have to keep it at a steady, low simmer, and stir occasionally. A little caramelizing when you don’t stir for a while is fine — good, actually — but you don’t want to stray long enough for it to burn. It’s a long project. I chopped the fennel especially chunky and irregular, because I knew there would be a long time ahead of occasional stirring and bubbling, and I wanted there to still be some visible pieces. The apples, diced irregularly, hold up for a good while and you might even begin to worry that you should have chopped them more finely after a couple of hours. But all the sudden, at a certain point, they just begin to dissolve. That’s the state that I wanted to turn off the heat on my pot at with this relish. 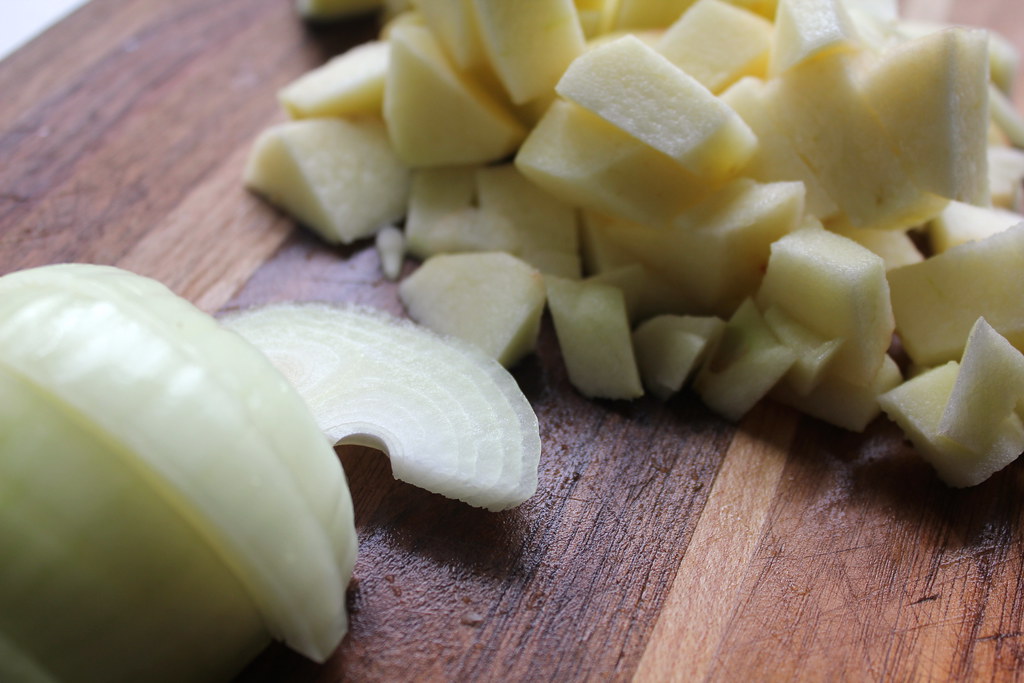 chopped apple and onion are added

After the vinegar was added and final adjustments for taste were made, this sauce was poured piping-hot into a sanitized mason jar and sealed shut. The lid sucked in, sealing the jar, and didn’t pop back up until I unscrewed it, days later, to take this photo. So much for preserving for very long.

Heat the oil over medium-low heat in a saucepan. Add the fennel, along with the salt. Cook over low heat, stirring occasionally, 10-15 minutes, or until fennel is slightly softened and golden-brown. Add the onion and apple and increase heat to medium-high. Stir in the sugar and the optional chili flakes.

Continue cooking, stirring frequently, as the ingredients release their juices and soften, about 10 minutes. Add 2 cups of the water and bring just to a boil. Reduce heat to a low simmer and cook uncovered, stirring occasionally, about 1 hour. If mixture becomes crusty and sticks to the bottom of the pan, add a small splash of the additional cup of water at a time to loosen the bottom. Stir and let mixture bubble to evaporate most of the liquid content so that it resembles the consistency of a thick jam. Once this stage has been reached, stir in the vinegar and let boil, stirring, for another 1-2 minutes. Remove from heat. Transfer immediately to a sanitized 1-pint mason jar and screw on the lid if you’d like to store it. Otherwise, sauce can be used immediately.