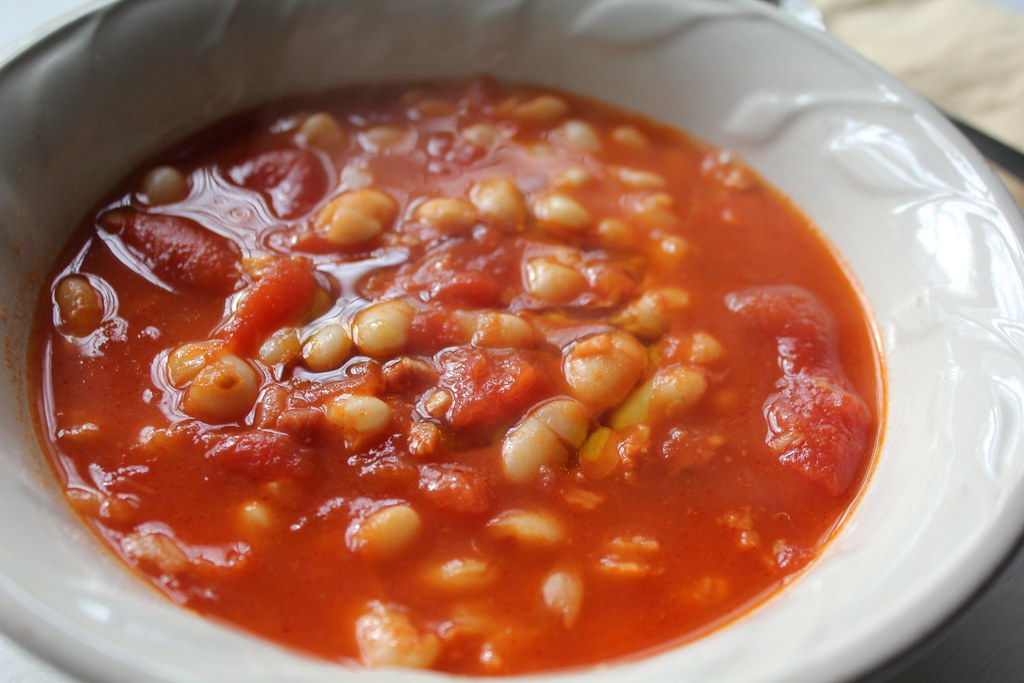 It’s more filling than a mere tomato sauce, but just as easy to make. I like to make versatile dishes in the winter; things that can keep well in the fridge, and keep on playing new roles well, too, albeit of a similar character. It’s not the Meryl Streep of foods, I guess: this bean and pancetta-studded tomato sauce wouldn’t exactly make a drastic turn in, say, Vietnamese cuisine. But it does wear many hats quite deliciously keeping within a European repertoire, making appearances with pasta, with crusty bread, or alone, drizzled with good olive or specks of parmesan and parsley.


That’s just the kind of shape-shifting dish I need for winter, when ingredients are more limited and, often, take longer to cook. This one worked right off the bat as a soupy, saucy sort of stew, since the beans had enough carbs themselves to keep me filled up after one hearty (and slurp-worthy) portion. Then, it served as a coating for pasta, sort of like pasta e fagioli (“with beans”), only I added some stray bits of kale sauteed with extra garlic before tossing it all together. It could also play the role of soup, a minimalist minestrone perhaps, perfect for dunking crispy slabs of stale bread in (or letting those soak into the soup, as a tomato bread soup with beans floating about). I’m entertaining the idea of mashing up the thick and very bean-speckled leftovers into a spread or dip for such bread slices, too. Least of all, these can be reheated as is as a tomatoey, duck-free cassoulet in the oven. 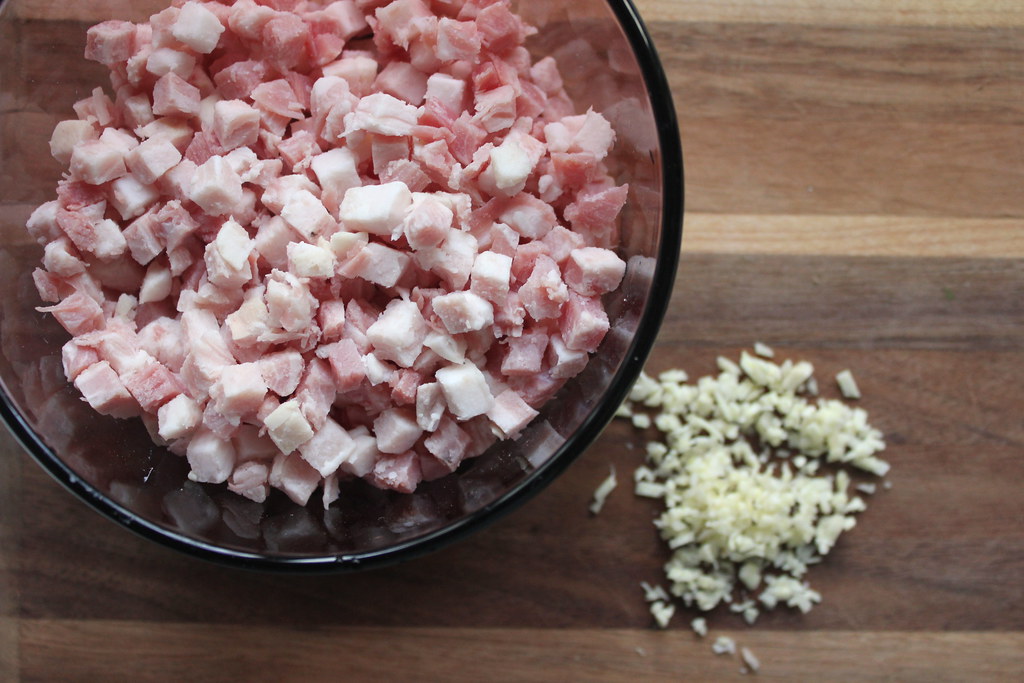 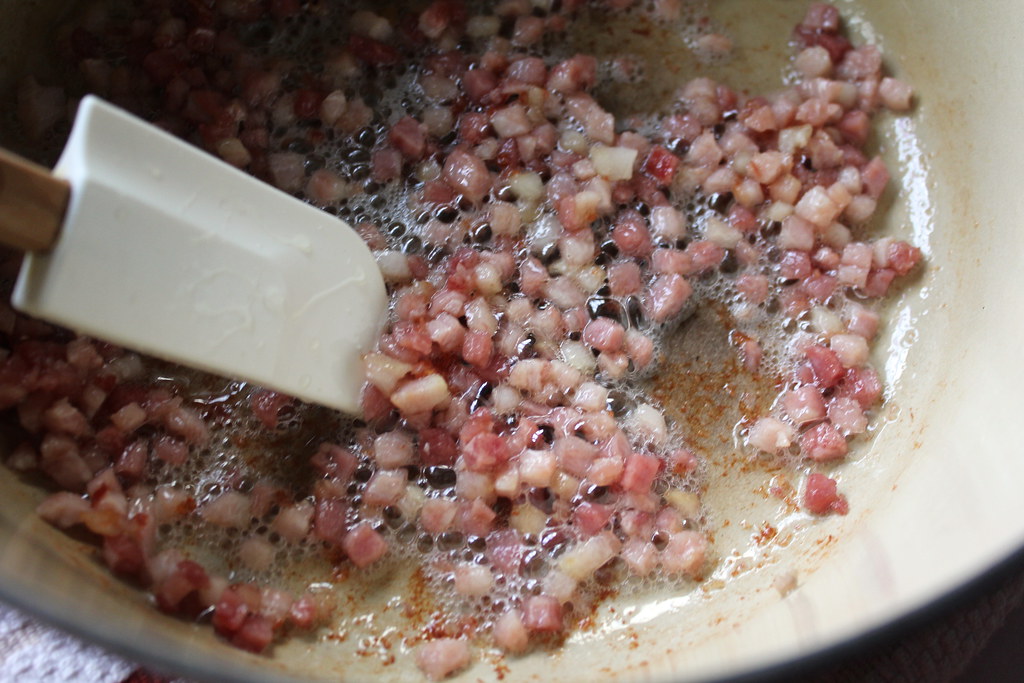 It only takes a few ingredients — namely, those in the recipe’s title. For best results, start off with dried white beans, such as cannellini, which are relatively small and quick to cook. Keep in mind that if you opt for larger bean varieties, such as Great Northern or Gigante, you’ll be waiting around much longer for them to cook. 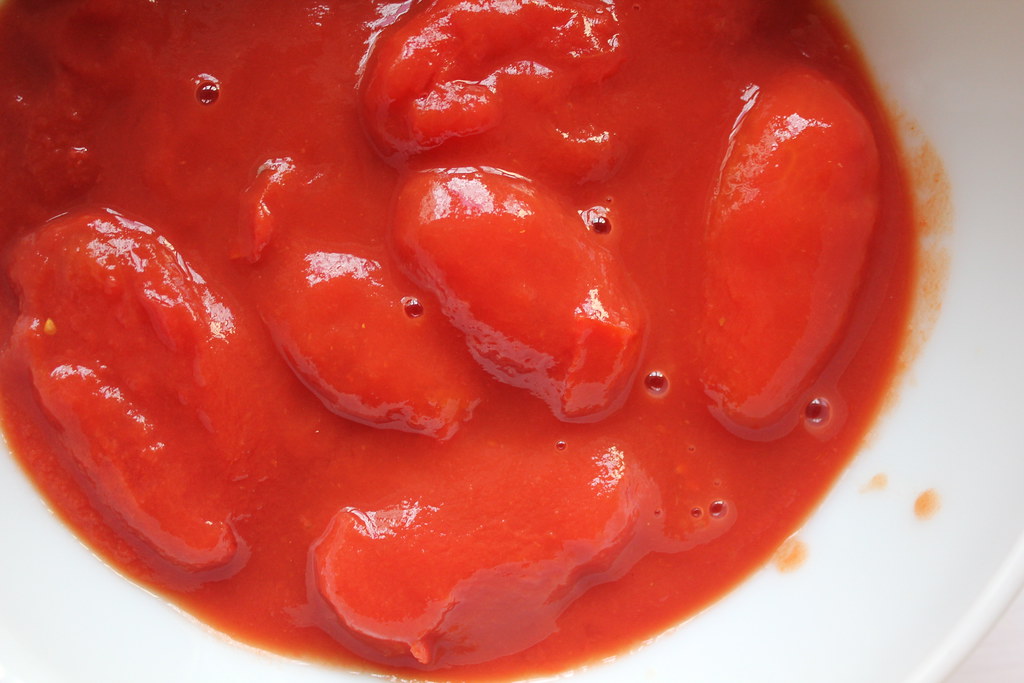 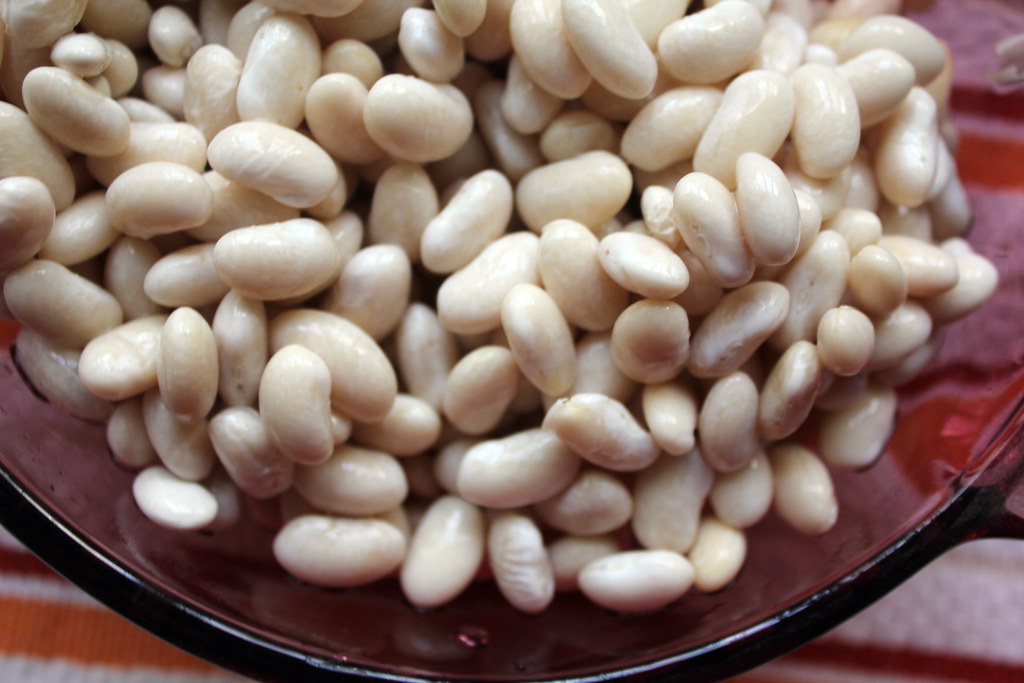 Then make your tomato selection wisely. This is going to have a great effect on the overall taste of the dish, and while I won’t preach to you what “the best” options for canned tomatoes in the store would be, I encourage you to try out what’s available and decide on a favorite yourself. I did an odd thing and didn’t bother to mash up or chop the whole tomatoes from the can before adding it to the pot. I just broke them up a little with a spatula as I stirred, and later savored the irregular chunks of tomato in the final dish.

Finally, the fun part: those bits of smoky porky stuff, in this case, pancetta. What’s a more classic pairing for beans than that? If you can’t find pancetta (an Italian cured pork belly similar to bacon), just get some good, slab bacon to dice up instead. Go light on the amount for just a touch of smoky flavor or heavy if you want lots of pork in your beans. Here’s a trick, though: to decrease the amount of grease in the pot, stir a paper towel around in the pan with the pancetta once it’s lightly browned. Repeat if desired. That’ll soak up excess rendered fat.

Served as is, I don’t know whether this is a soup, stew or braised beans. I just know that I ate it, and enjoyed its many encores, too.

Heat the olive oil in a medium-large pot or Dutch oven over a medium-high flame. Add the pancetta and cook, stirring occasionally, until slightly browned and crispy (reduce heat if starting to burn or stick), about 5-6 minutes. Optionally, stir around a paper towel in the pan to absorb excess grease, and discard. Add the garlic and stir another 30 seconds or so. Add the white wine and bring to a boil, stirring to scrape up any browned bits at the bottom of the pan.

Drain the soaked beans and add the beans, tomatoes and all their juice, and the water. Bring just to a boil, then reduce heat to a low simmer. Cover and cook at least 1 ½ hours, preferably two, until beans are very tender. Season with salt and pepper to taste. Serve with a drizzle of extra olive oil over each bowl.

Seven brownie points: Wholesome, hearty beans help fill you up while providing fiber and protein – they’re good for your heart and much more. But here they’re combined tasty, fatty, pork belly bits for that smoky depth of flavor that’s so beloved with beans. Canned tomatoes have lots of sodium, although vitamins that are good for your immune, especially in winter. Add some greens like spinach to boost its nutritional value, and go easy on the bacon (or omit it altogether) for a leaner, greener version.

Five brownie points: Here, the meat plays backdrop to the plant-based protein, for flavor rather than substance. That’s a welcome role reversal for your health and the land. The imported canned tomatoes don’t help this score too much, but at least might remind you to can your own next summer harvest season.