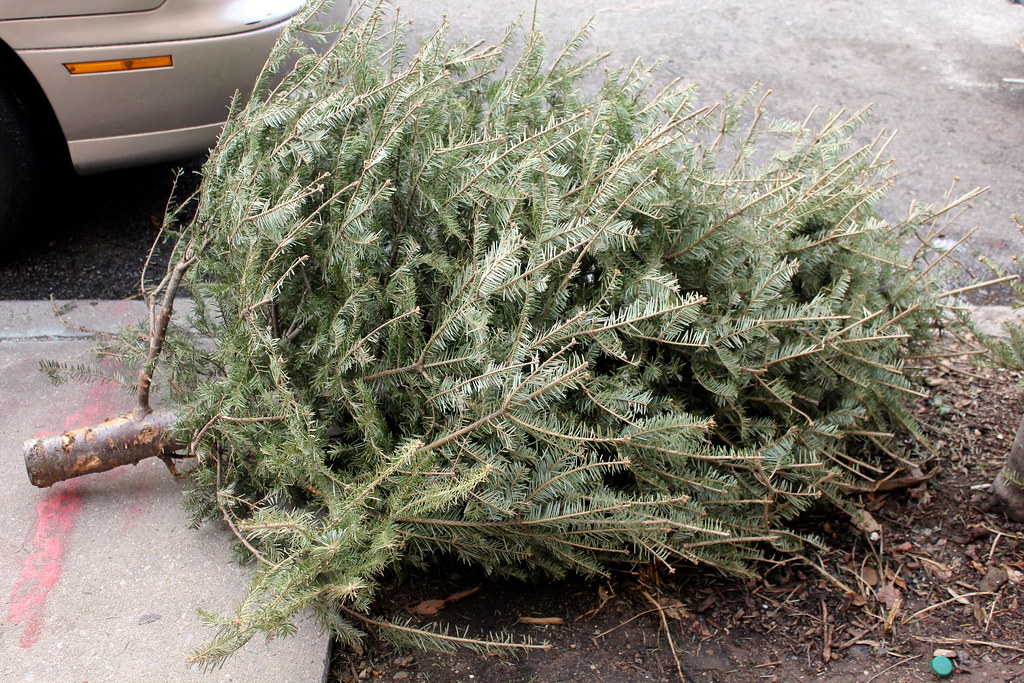 Here lies the crisped remains of the tree that spread so much cheer throughout my home; decked the hall with boughs of Balsam fir; stood a symbol of goodwill and love and green leaves so unchanging. O tanenbaum, rest in peace ye merry fellow. (AKA, good riddance, ye fire hazard.)

We rarely talk about spent Christmas trees. Sure, there’s a hullaballoo when Christmas trees are for sale (and — gasp! — so early this year! We haven’t even gotten our turkey!) We contemplate how and where it was grown when and if we decide to buy one from a tree farm or garden shop. But once the holiday has passed, the good tidings been tided, we rarely think about, talk about, or worry about that dried-up Christmas tree-thing. But unfortunately we have to see it. For the past two weeks, I have seen the same freaking spent Christmas trees lying on my block, blocking my path along the sidewalk. Some of them are so small they could be a tabletop house plant; others are far bigger than me and impede on parking spaces. Some of them still have their darn Christmas tree lights wound around their branches (after all, if you’re going to purchase another Christmas tree, what’s the harm in purchasing some more cheap lights?). Some have sat there through snow, rain, and dog pee, and it seems like they should have been taken away by now. That’s okay though, they’ll disappear soon, and I can forget about whatever happened to them, why, how, and where they were discarded after laying at my feet unceremoniously for a few weeks. It’s over; so get over it (until next year).

Actually, I knew someone once who cared and thought very much about the fate of spent Christmas trees. Her name was Caitlin, and she was the younger sister of my childhood best friend. One year, Caitlin was crying hysterically when they dragged her beloved Christmas tree out to the curb. She had grown attached to the furry, frilled thing, and had given him the name, “Alfie.” So to appease her, her family created a script, wherein “Alfie” would be going on vacation for the rest of the year, until they could find him again at the same Christmas tree farm and bring him into their home. Each year after that, the Christmas tree (“Alfie”) would happily spend his holiday season in their dining room much like a member of the family who lives afar. (Alfie even sent greeting cards to the household during the year.) Caitlin and her family went along with this myth for many years, because it was fun. And who can really blame her? When you’re told that elves are the ones who made your toys and that the Tooth Fairy takes away your teeth, but you never (damningly) see the actual man in the red suit on Christmas Eve, nor his red-nosed navigator — you do, however, see the Christmas tree. You primp and preen it, adorning it with ornaments to admire it, for several weeks. What’s not to believe in that? What’s not to believe that it should also be treated as something special — magical, even?

I have no qualms nor rude awakenings about the eventual fate of spent Christmas trees; they’re chipped up for all sorts of garden purposes, like mulch, depending on the municipality. It’s much better than the fate of spent flowers that often end up in the landfill. But I have to say that the whole Christmas tree-worship-then-discard is weird. Perhaps it wouldn’t be so weird if it were merely a once-in-a-lifetime sort of thing: let’s say you decided to make a sculpture out of spare tires one time. Okay, cool. You found some in a junkyard, but actually buffered it with bought tires. The sculpture becomes a success, and soon you’re using new, bought tires instead of found ones to make many more. It becomes an enterprise, and pretty soon, everyone else is doing it, too — buying tires for a reason that it intrinsically wasn’t meant to serve, except for the newfound reason of beautification to one’s dwelling. Maybe some are now produced with the intention of using for this latter purpose only.

We could go on and on about this, but in essence, the enterprise of “Christmas trees” is fictionalized nature; caricatured nature that’s in one day, and out the next. It serves a seasonal role, then is spent. Then, we need to replenish it with newly grown species just serving this sole purpose the next season. It’s a little weird, yes, but we can predict it by now. Streamline its production. But let’s not forget that trees are trees, and Christmas is Christmas. These two take a yearly waltz together, then are torn right apart. And what’s so natural about that kind of relationship, really?

Children’s reactions are a great indicator of weirdly-unnatural conventions, and I would hope that for future generations, we could teach folks like Caitlin more bluntly about trees and their natural (and not-so-natural) usages. We could face the strangeness of plopping our trees on the curb each year, a few weeks after Christmas, as well as talk about their origins at a Christmas tree farm when buying it beforehand. We could see the tree in its forest and chop it down ourselves if we so wished to, and acknowledge that it was done to serve these conventionalized reasons of decoration. I think we all understand this positively when it comes to placing a bunch of picked wildflowers in a vase. But when it’s a major ordeal — involving industries of tree farmers and the city’s green waste collectors — it gets so often regarded as “normal,” functioning, adult, societal activity. And that’s gotta be faced for what it is: farce.