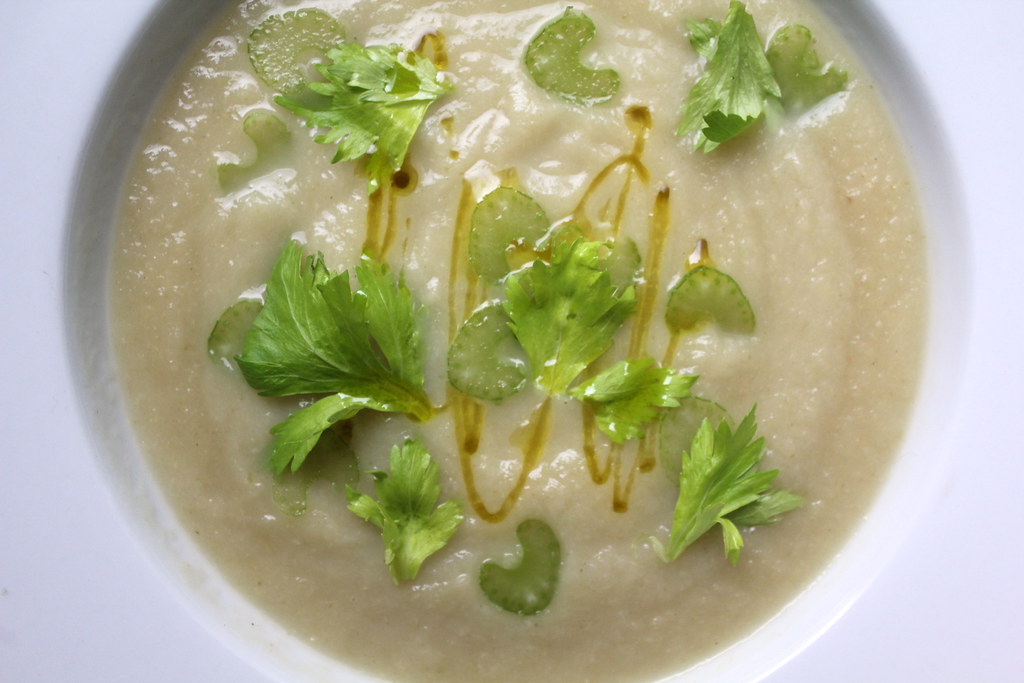 Not just celery root (or celeriac), not just celery (stalks), but all-parts-of-celery soup — from soup to nuts, as they say. Okay, there’s actually no nuts in this soup. (Why do they say this?)

The celery plant has two very different identities, you see. From the warm, spring months all the way into crisp fall, its tall, proud stalks and feathery leaves are predominantly all that we see of it, commanding our attention like a plume-helmeted palace guard. In the frosty winter months, its gnarly root is unearthed, dirt clinging un-scrubbably to its tough exterior. Looking, more or less, like the mole who pops up from his burrow but really wants to stay down, away from the blinding light. We’ve headed into mole season. The roots have been yanked. The stalks have long been snipped. The plant has reached the end of its cycle, and it’s time to celebrate it with a soup. 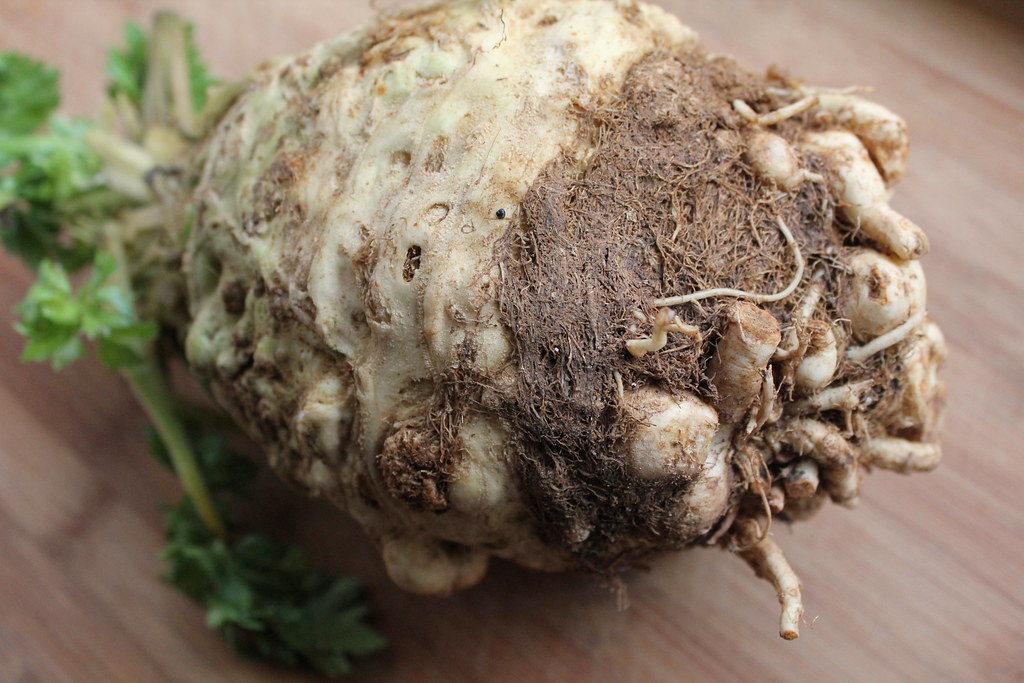 Do you have different extensions of your own personality that only surface seasonally, too? Maybe you feel like hibernating throughout the winter, but come alive, dancing and lush, when it’s warm outside. I wanted to capture the dual personalities of the celery plant (and maybe, me) with this celery soup. Freshly dug and oh so ugly, celery roots are prime picks at the local farmers markets in NYC now. While out of season locally, the fresh, spring-green stalks and leaves are readily available (grown in other locales), and are a must-have in many winter soups and stews that we tend to make these days, too. 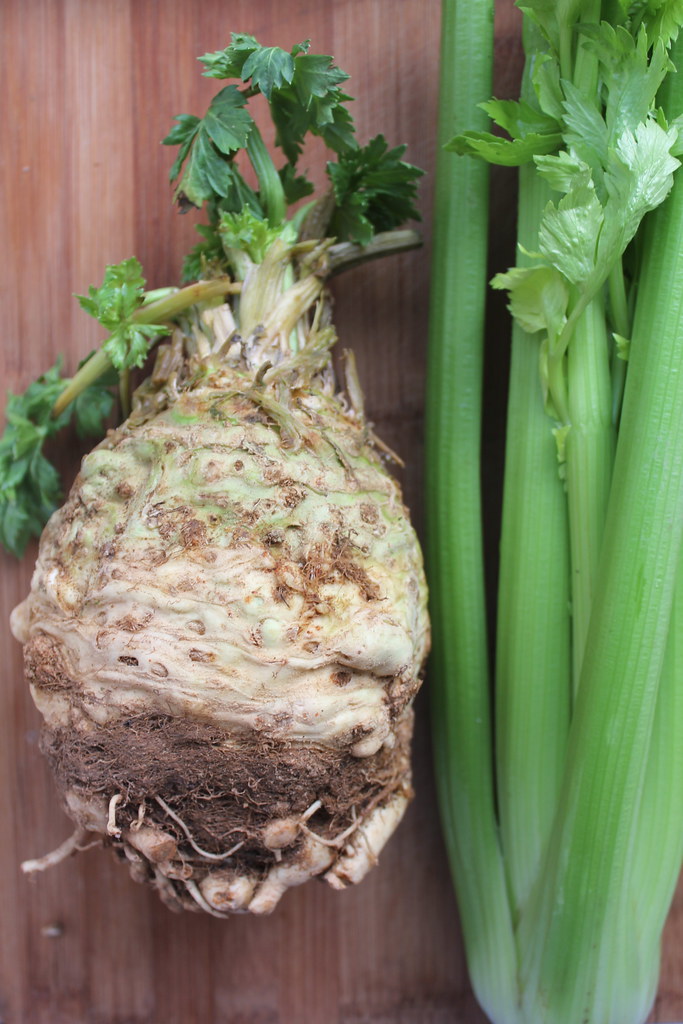 You can make a lovely, bisque-like soup using only celery root. I’m not sure this would work out with celery stalks alone, though. The celery root, while sharing a similar fragrance with its stalks and leaves, are much more fibrous and dense, and blend to a creamy-looking puree. The stalks are much more watery, but I thought they’d add a nice, springlike flavor blended into this otherwise wintery soup. Cooked in liquid, both the chunks of chopped root and stalks will become translucent, although this takes much longer for the celery root. Wait for it to happen, though, and by then, the stalks will have nearly disappeared. 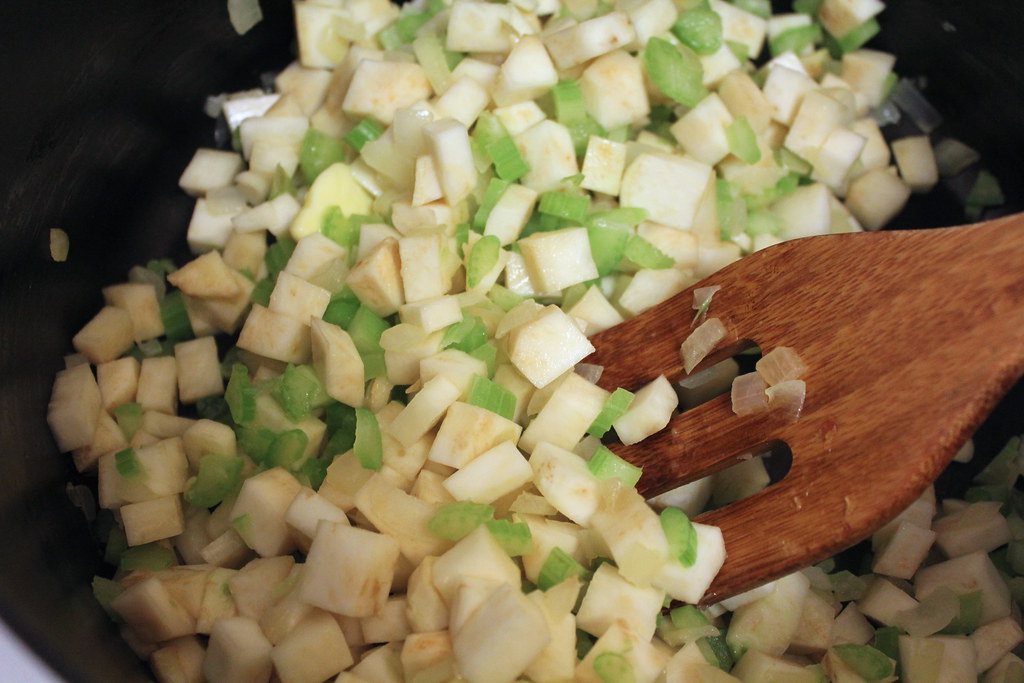 Now, it’s simply time to blend, pulse, puree, or pass through a fine-mesh as an extra step, to create the buttery-smooth texture that’s so appealing these cold winter days. For added textural contrast, I finely sliced through some of the stalks and snipped some fresh leaves for garnish atop each bowl. You get to experience the best of both sides of this vegetable, at once. Wouldn’t we all be better if we could channel that in ourselves everyday?

Celery and Its Root Soup
(makes about 4-6 servings, or 1 quart)

Trim the base and the stem from the celery root. Cut away its tough skin with a knife, making sure there’s no tough skin left. Chop to a fine dice (about 1/2″ maximum).

Heat the stock or water in a separate pot and bring just to a boil. Pour into the pot with the vegetables. Bring to a boil, then reduce heat to a gentle simmer. Cover and cook at a low simmer for at least 1 hour, or until all the celery root cubes are translucent and appear the texture and color of watermelon rind. Transfer to a blender or food processor (or use an immersion or stick blender) to blend several minutes until completely smooth. Optionally, afterward you may pass the mixture through a fine-mesh sieve. Return the soup to a pot. Season with salt and white pepper to taste, and stir in the optional tablespoon of butter.

Ladle soup to individual serving bowls. Top each with the sliced celery stalks and leaves, and a drizzle of the olive oil, and serve immediately.

Three brownie points: Excellent choice, sir! You’ve just made a hearty, comforting, and creamy-textured soup using vegetable fibers (and an optional tablespoon of butter if you want to go there). It’s smart and satisfying. Celery — and its root — are really known for providing tons of flavor, creating the savory dimension for so many stews and soups. But the root is a great source of potassium, fiber, phosphorus and even calcium, while the stalks (especially when you include its leaves) provide Vitamin K and Vitamin A.

Six maple leaves: I’m being tough on this dish even though it is (or can be) entirely plant-based and vegan, because it does require the use of both celery root and its currently out-of-season stalks. There are times of the year in the Northeast when both parts are available locally-grown, late spring and fall-early winter. But now isn’t quite the time, so I opted for California-shipped celery stalks for this dish.