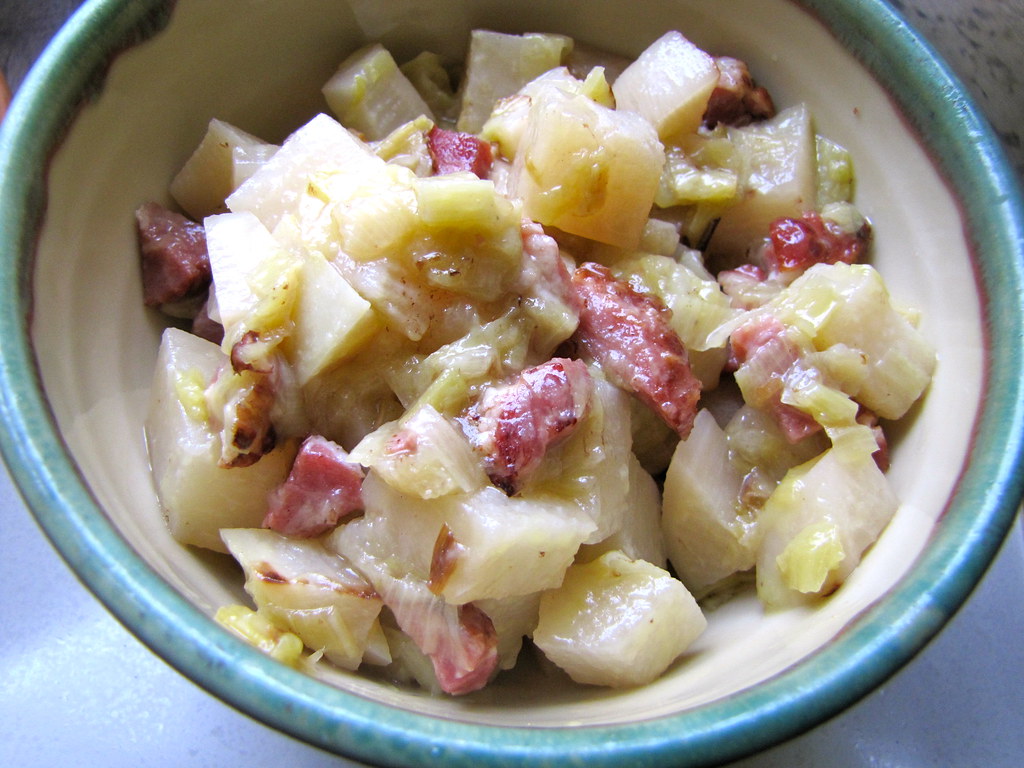 Probably one of the last foods I hear talked about what when talking about Thanksgiving are turnips. It’s probably one of the last foods you’ll hear about, period. But it’s something I see in so much variety this time of year at the farmers market, and looking into the turnip’s many virtues, this is not so surprising. They’re an exceptionally useful and easy crop, adaptable to many climates and types of soil, and able to be left in the ground until next harvest. As such, its many varieties have been a staple cold-weather food for cultures around the world. So if you’d like to be nostalgic at your holiday table, you could add this humble source of hardy nutrition.


I cooked a great pot of chopped turnip root in a manner that you’d see more commonly done for its dense, bitter greens. Seasoned with crisped bacon trimmings and a leek for sweetness, the turnips softened and turned translucent while absorbing their surrounding flavors. The resulting bite practically melts in your mouth. 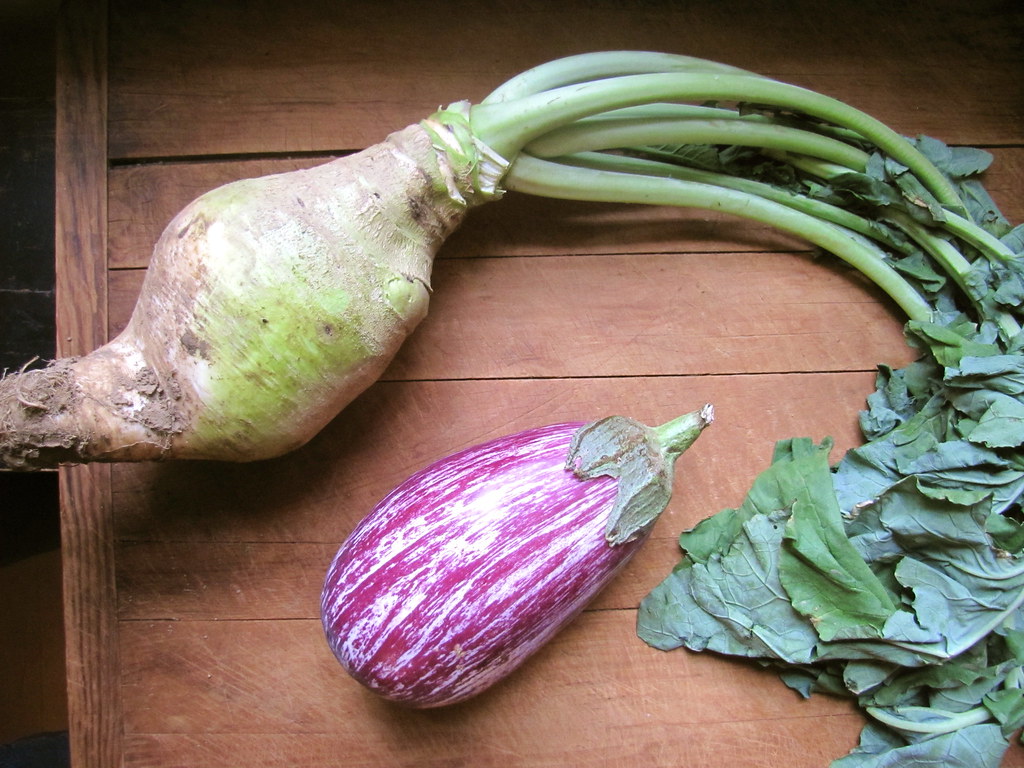 the massive turnip dwarfs an eggplant


The reason for making a massive quantity stemmed from the fact that I’d found a mammoth turnip variety on a recent trip to the Greenmarket (I just had to have it). These roots can range from the cute, little radish-sized hakurei turnips to something that dwarfed an eggplant, as evidenced in this photo. It seemed only fitting to stew them somehow, in a big ‘ol pot. 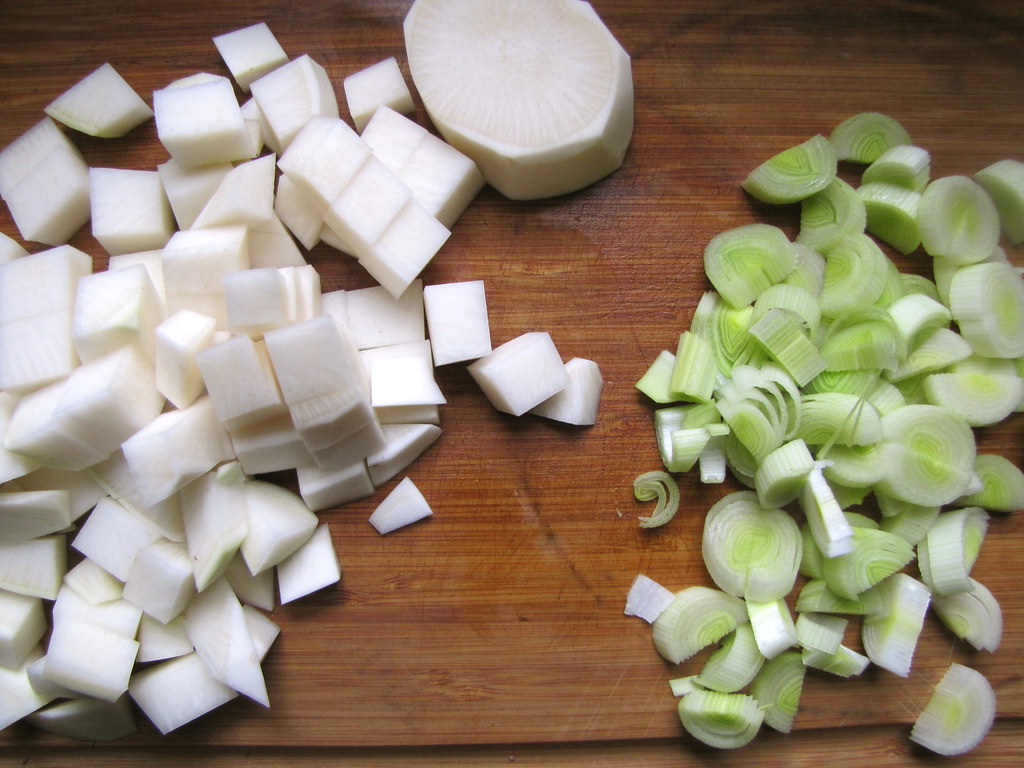 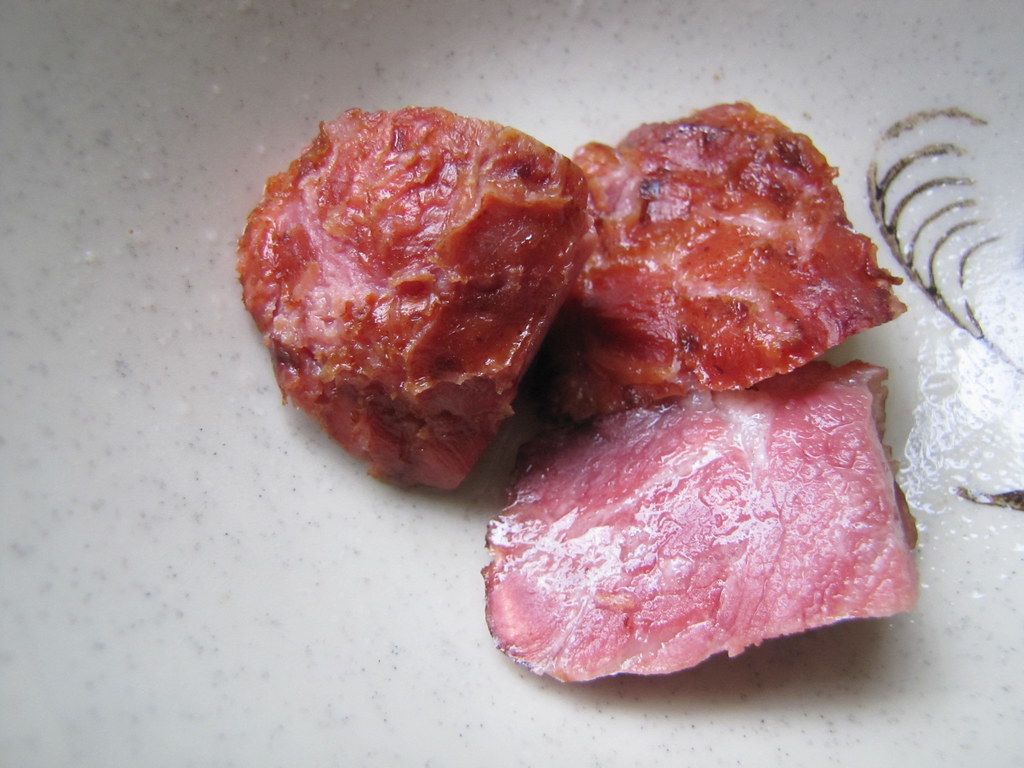 
I’ve used just water for a braising liquid, although you can opt for chicken or vegetable if you prefer. The simmering bits of bacon provided plenty of flavor alone. Be sure to crisp them gently before any liquid is added, to bring this out more; I’ve used trimmings from slab bacon that was fortunately on sale from Flying Pigs Farm, and are perfect for chopping into finely-diced lardons. See if you can score some bacon ends or trimmings to cook with from your favorite butcher, too.

Now, for the greens of this particular turnip, I might have to break out an even bigger pot.

Braised Turnips with Leeks and Bacon
(makes 6-8 side servings)

Heat the oil in a large, heavy-bottomed pot or Dutch oven. Cook the bacon at medium-high, stirring occasionally, until just crispy and browned (about 2-3 minutes). Remove bacon and add the leeks to the same pan. Reduce heat to low and cook, stirring occasionally and seasoning with a pinch of salt and pepper, for 5-6 minutes, or until softened. Return the bacon to the pan along with the turnips. Increase heat to high, stir and season with salt and pepper for 1-2 minutes. Add enough water to cover by about half the height of the turnips. Partially cover the pot and cook for 20-30 minutes, stirring intermittently to cover all the turnips. Serve once the turnips are very tender but still holding their shape, and most of the liquid has evaporated.

Cost Calculator
(for 6-8 side servings)

Four brownie points: This is one of those recipes where the devil comes to play with the angels; for the most part, it’s a disgustingly healthy vegetable prepared simply, however with bits of sinfully artery-clogging bacon. But when used for flavor, these scraps of bacon are the spoonful of sugar that makes the medicine go down. And medicine might just be a good metaphor for turnips: they’re so detoxifying and cleansing on your system, provide fiber, potassium, calcium and Vitamin C, and have few calories for all they’re worth.

Eight maple leaves: Just three simple ingredients, each easily found from local farmers at this time of year: turnips, leeks and bacon. As a not-entirely-vegetarian but certainly-vegetable-focused dish, there is some virtue in using the scraps and bits of meaty parts that are leftover from the butcher/farmer (if being sold for anything but dog food). You get to save on such expenses purchases as when you’re buying only humanely raised meat, and take a byproduct off their hands for a profit. Win-win.