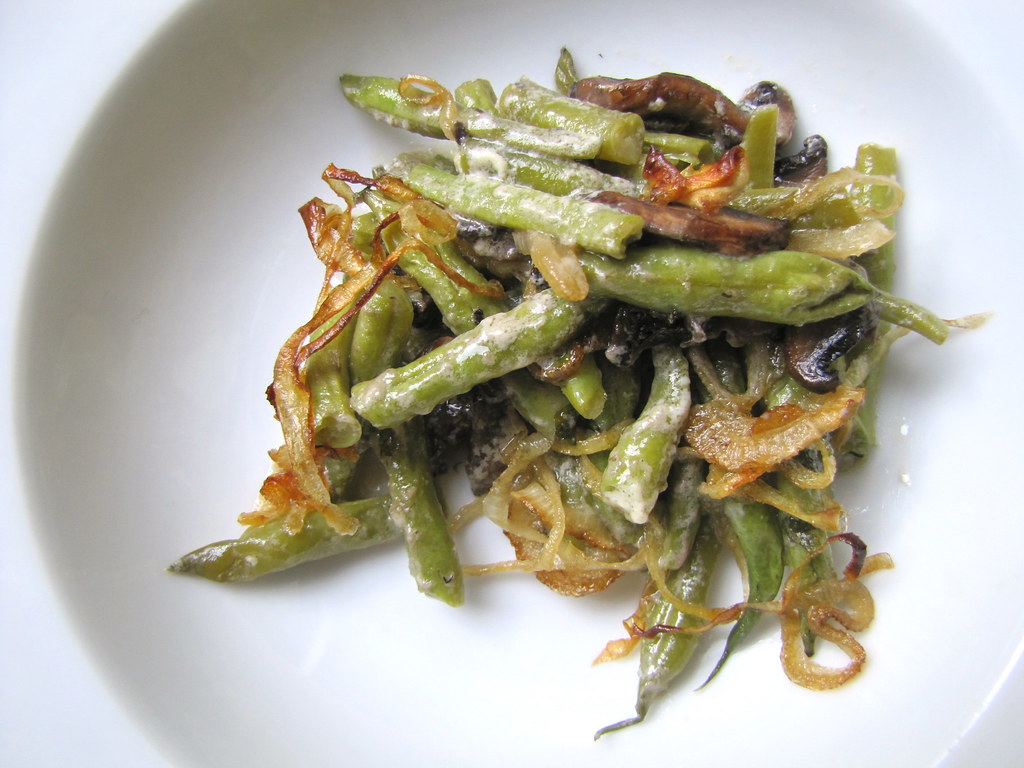 Sometimes you’ve just got to eat something ooey, gooey, and rich. That doesn’t mean it can’t be vegetables, layered with all that good stuff and little else. It occurs to me now that whoever drafted that recipe for green bean casserole and sold it to millions via labels on condensed soup cans was probably trying to come up with a “healthier” alternative to most casserole recipes. In this recipe, I’ve probably found the most decadent way of preparing a side of green beans that I can possibly muster — and it’s still better for you than the classic.


Yet keeping in theory with the practical aspect of the dish, I wanted to create a variation that called for no canned soup but still a one-two-three ease of putting together to bake. So I didn’t head down the expected route and make a flour-based bechamel sauce. I instead gathered a few flavor-packed ingredients, including some creme fraiche for a little tangy depth, to make a suitably saucy coagulent with. Would it be a success? Would it compare to the real thing? 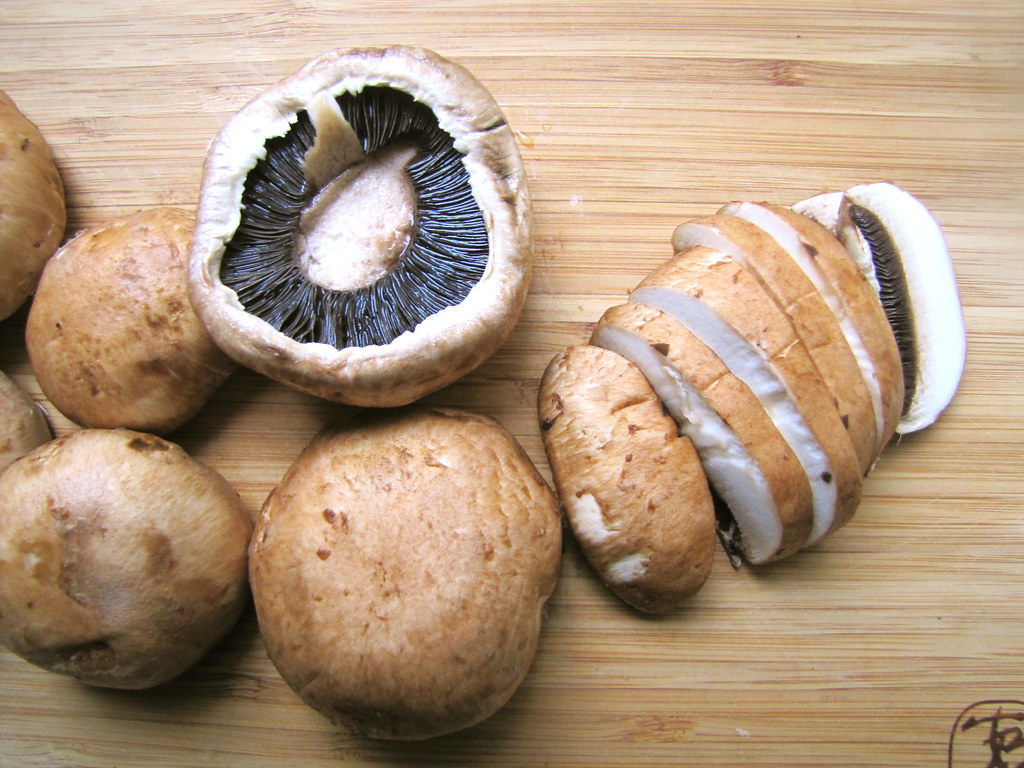 fresh crimini, or baby portobello, mushrooms are sliced and browned 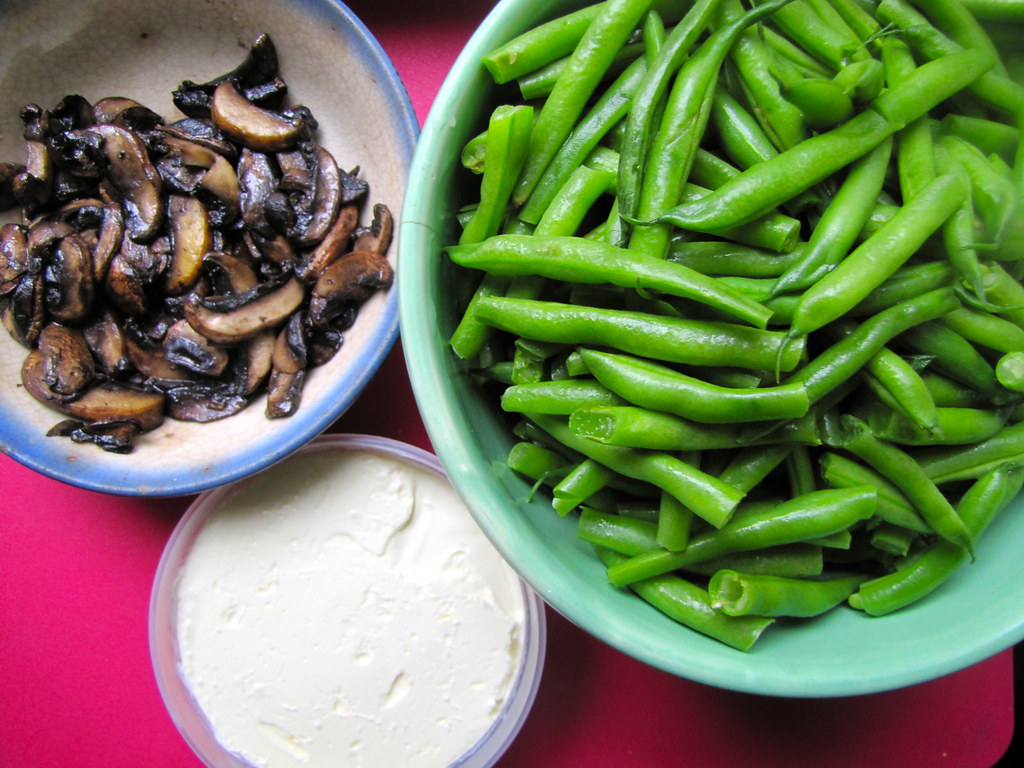 
The incentive for making this casserole came to me by way of my editor at Grist.org — not my own nostalgic impulses for Thanksgiving sides (more on that in a moment). Grist wanted to run a series on Thanksgiving recipes without the processed ingredients and canned substitutes for truly homemade food. My editor had suggested green bean casserole as one of the dishes for me to try out, and I happily accepted the challenge. There was a giddy streak from the novelty rather than nostalgia in me; see, I’ve never made nor can recall even eating green bean casserole before this. [Explanation: I’m an East Coaster with a Chinese mom.]

Now that the cat’s out of the bag, I can tell you that my friends who noshed on this casserole at a pre-Thanksgiving potluck last Sunday nodded at this revelation as if it made all the more sense. “You have nothing to hold it to so you can make it however you want,” they said. And, “You have one hell of a beginner’s luck.” Apparently everyone at the party loves green bean casserole, and loved this version of it, however it differed from ones past. According to them, it looked convincing enough to hearken the memories, but it tasted even better than them, too. A win-win for tradition and novelty, perhaps? 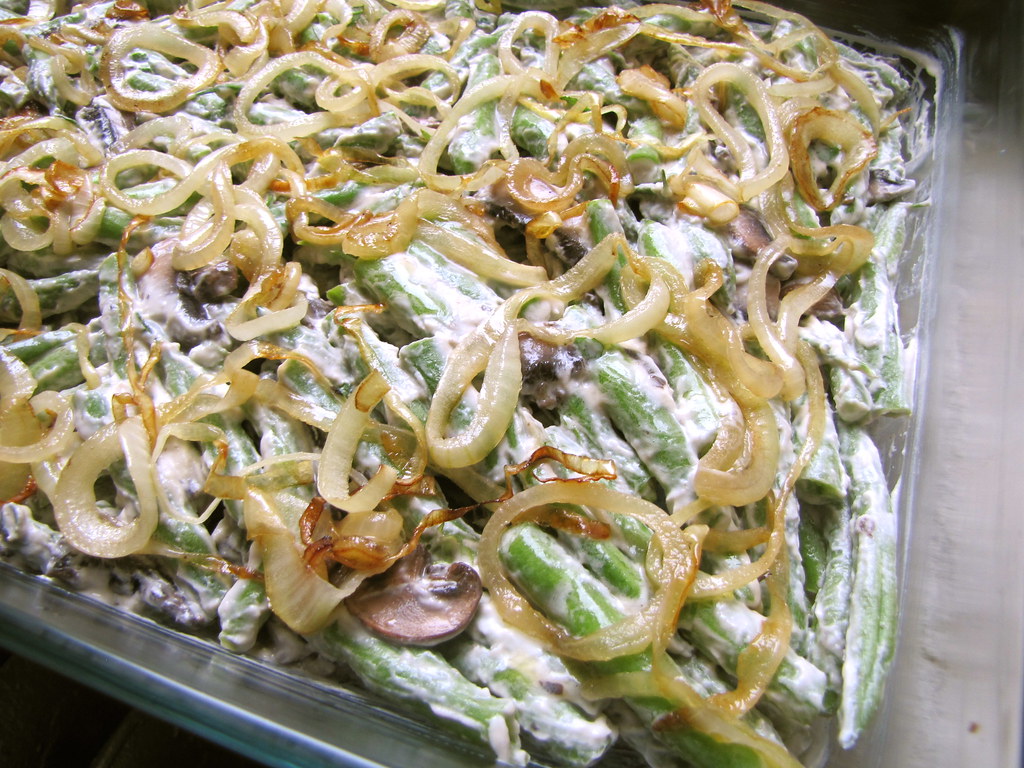 topped with caramelized onions before baking for a crisp topping


So if you’re looking to put a new spin on a classic — and forget the sodium and preservative-rich canned and instant ingredients — here’s one way to make green bean casserole. I tied it together with a beaten egg, slipped into the creme fraiche (taking a page out of lasagna-making, where this helps stiffen ricotta). To make it extra gooey and flavorful, freshly grated parmesan cheese is heaped into this mixture, and you can always substitute with other cheeses, like gruyere. For that classic, creamy mushroom taste, sauteed crimini mushrooms were folded into the mixture once cooled, casting a brownish tint. Finally, instead of those weird, fried onion rings that come in canisters for a crisp topping, I layered soft, caramelized onions on top of the casserole, pre-bake, to sizzle into crisp rings once finished.

In the end, I really must say that I’m not at all convinced that baking is a good way of showcasing the virtues of green beans. While I kept them completely fresh before going into the oven, I’m not too fond nor attached to the sodden, green logs in the end. In fact, they remind me of overcooked elbow macaroni in a mac and cheese bake. But, getting back to the dish’s original intent, maybe that’s part of the point.

In a wide, large skillet, heat the canola oil over a low flame and add the onion slices. Let them cook, stirring occasionally, until most are soft and slightly golden in color, 20-30 minutes. Keep an eye on them and reduce heat if onions are turning crispy and brown.

Preheat oven to 375 degrees. Heat a pan over a high flame add the butter. Let it melt and bubble, and add the sliced mushrooms. Cook, stirring occasionally, for 2-3 minutes or until mushrooms are gently browned. Season them with salt and pepper to taste. Remove from heat and let cool.

Beat the egg and combine it with the crème fraiche. Stir in the grated parmesan and a pinch of salt and pepper. Toss the green beans and cooled mushrooms with the mixture to coat thoroughly. Pat into a casserole dish and arrange the caramelized onions evenly across the top. Bake for 30 minutes, or until the onions are just a little crisp and browned on top. Let cool at 5 minutes before serving.

Six brownie points: It’s just over the edge of unhealthy, despite being a vegetable side. Despite also having green beans, a very beneficial veggie with natural sweetness and appeal and plenty of vitamins — including protein. These beans are pretty bogged down with artery-clogging fats from the creme fraiche and cheese, but at least they’re natural, simple ingredients that are artisanally made, meaning the same way they’ve been done for centuries, not with a load of chemicals.

Four maple leaves: This is as murky as the color of the beans after baking. Green beans unfortunately are just out of season in my region, so this and the mushrooms both were conventional supermarket buys (grown in California). The creme fraiche, egg and onion were easily found at the local farmers market, and can be all through the year. But perhaps the most “green” aspect of this recipe versus the original with canned stuff is the focus on fresh ingredients, yielding less waste (from packaged, processed foods), less energy to produce, and providing savory results all the same.