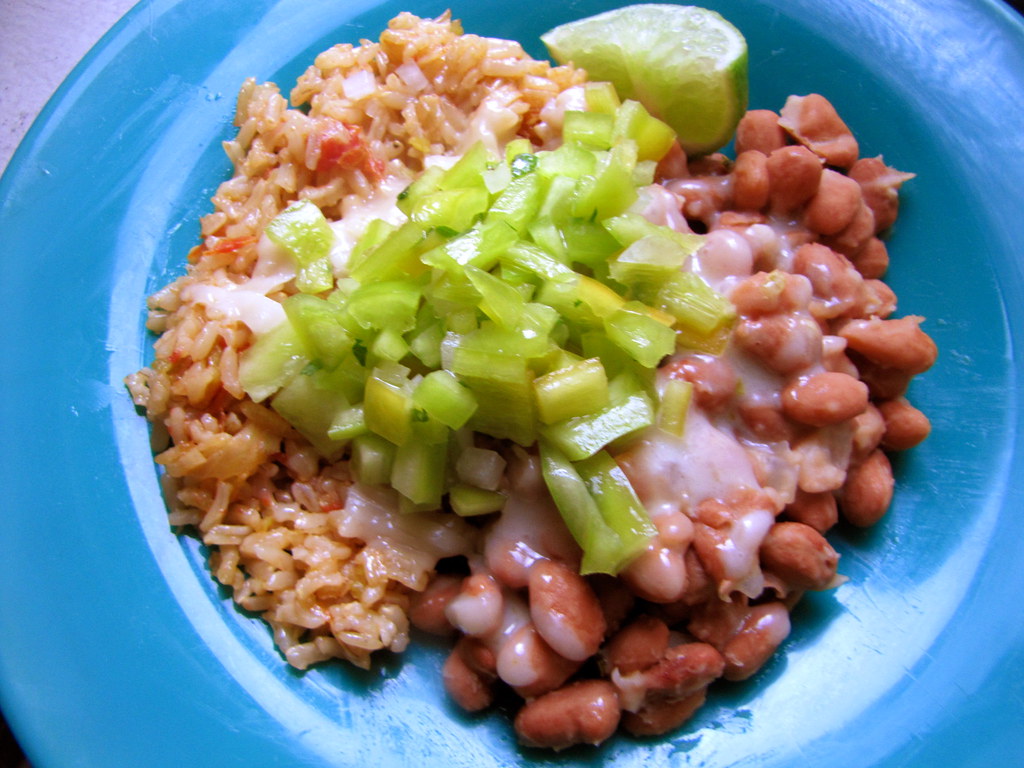 I couldn’t decide whether to cook the crisp cubanelle peppers I’d gotten from the market or chop them up to serve somehow raw. So I went with the best of both worlds, softening the pale-green pieces along with onions, garlic and fresh tomato for a Spanish rice infused with chicken stock, and mixed the remainder with fresh lime juice, onion and mint leaves for a refreshing topping. Yeah, I’ve had a serious craving for Mexican food lately.


That doesn’t mean you need to order out, though. In fact, beans and rice (from many cultures, with many twists) is one of the most low-cost and hands-off foods to prepare for yourself, and I’ll be darned if it’s not one of the most satisfying (and healthy). And rather than a smattering of ingredients, you can easily pull off a well-rounded meal with just a few ingredients, fresh and dried, using this simple formula. That is why an improvisation like this on a Tuesday night gets another recipe post in this blog. 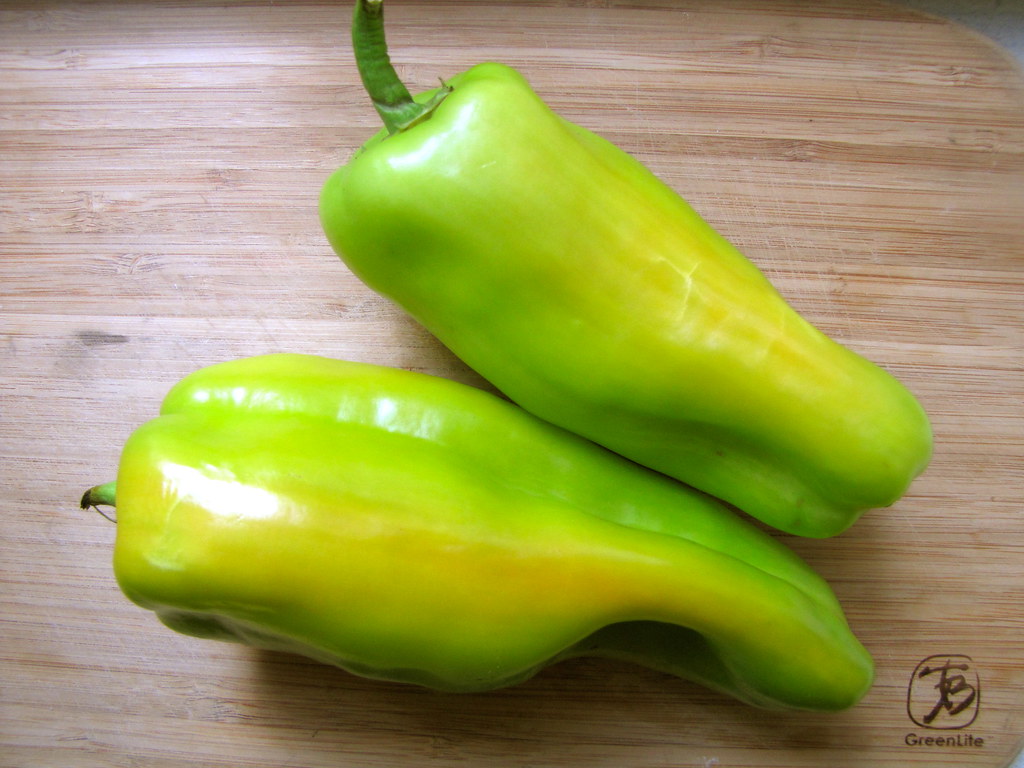 
But also, it’s because sweet peppers — from Italian frying peppers to mildly hot Hungarian wax to whoknowswhat from heirloom seed-loving small farmers — have just reached a bursting point in the harvest season. It’s a peppery time, indeed. I savor types that are full of sweet flavor with a brittle crunch that goes “pop” in your mouth when you taste it raw. A hint of spice is nice, too, but you can never really tell for sure how much heat each individual pepper will have until you do this taste-test. 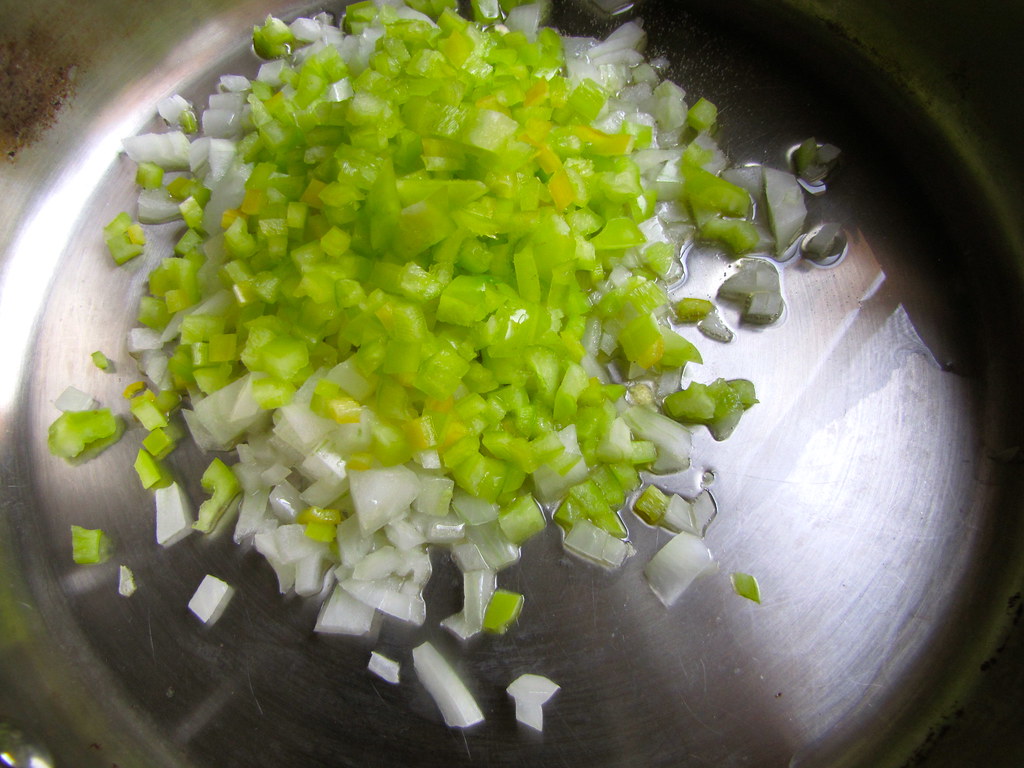 onions and peppers are sauteed first for the rice


There’s been a restaurant trend of shisito peppers lately, which are often found “blistered” on a grill or from some other high-heat form of cooking for a spare few seconds or so. These peppers are very similar to other types including padron peppers favored in Spain (and at Fishkill Farms, where I scored a handful at the Greenmarket one Saturday recently). I went with a pretty generic type of pepper that you can usually find in your grocery store year-round for this recipe: cubanelle. These particular peppers looked perfect in their crates: lemon-lime colored, with a reddish stroke on their sides, waxy, and crisp as could be. But if you see really great-looking bell peppers or perhaps Anaheim peppers instead of Cubanelle at your local market, choose them instead. It’s all about picking the perfect peck of peppers, my dear Peter Pipers. 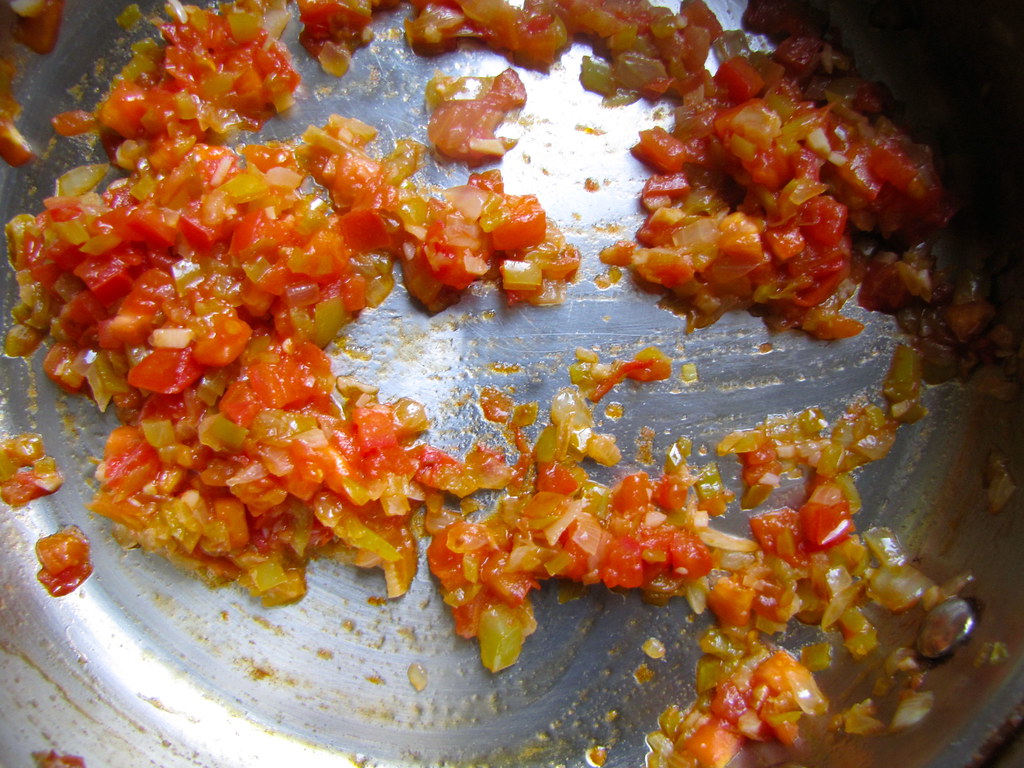 chopped tomatoes are added and cooked down until concentrated

I usually give more attention to cooking the beans, but this time around, I focused on the rice. Cooked properly, a savory, traditional Spanish rice can be satisfying enough as its own meal. Choose long-grain rice (I went with brown long-grain) and give them a rinse to remove excess starches before you begin. The grains will cook in a flavored stock made with a cooked-down sautee (or sofrito) of tomatoes, onions, peppers and garlic. You can prepare the sofrito a day or two ahead if you like.

To build the most flavor, start by adding just one or two ingredients at a time, and cooking over low heat very slowly. Gradually let each addition cook until the pan becomes too dry. I began with the onions and peppers, followed by garlic and a chopped tomato, which released its juices and cooked to a thick, intense red paste. This is how you want your pan to look before adding the rice and stock. I threw in a bay leaf, and then let the mixture simmer uncovered, stirring only occasionally, until the rice was cooked through. 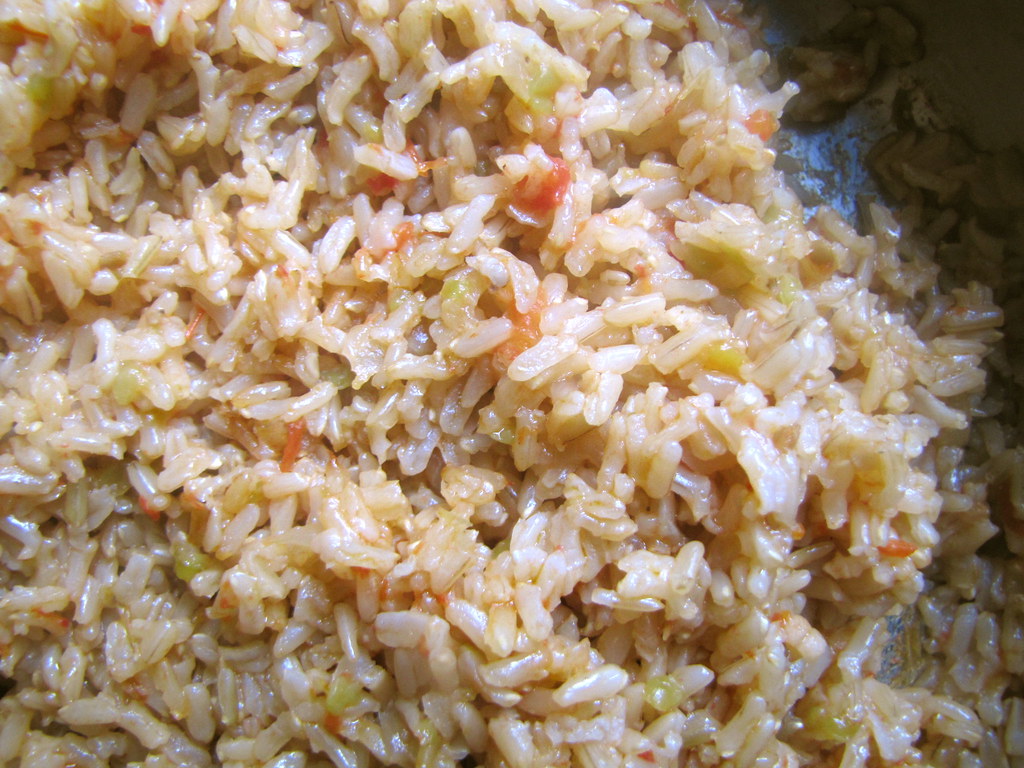 rice is cooked in the sofrito and stock


Meanwhile, I prepared the beans (which I’ll admit were pre-soaked and cooked already as leftovers from a previous batch that didn’t make it into a bean salad). In a pinch, you can simply rinse out a can of beans to start out instead of using dried ones, which can take varying lengths of time to fully plump up. I like to cook my beans just so that they’re swimming in a viscous, starchy sauce, but are mostly intact. This can only be done with long simmering if starting out from dried beans. With canned beans, you can simply sautee some garlic in olive oil, then add the beans along with a splash of water to cook a few minutes. 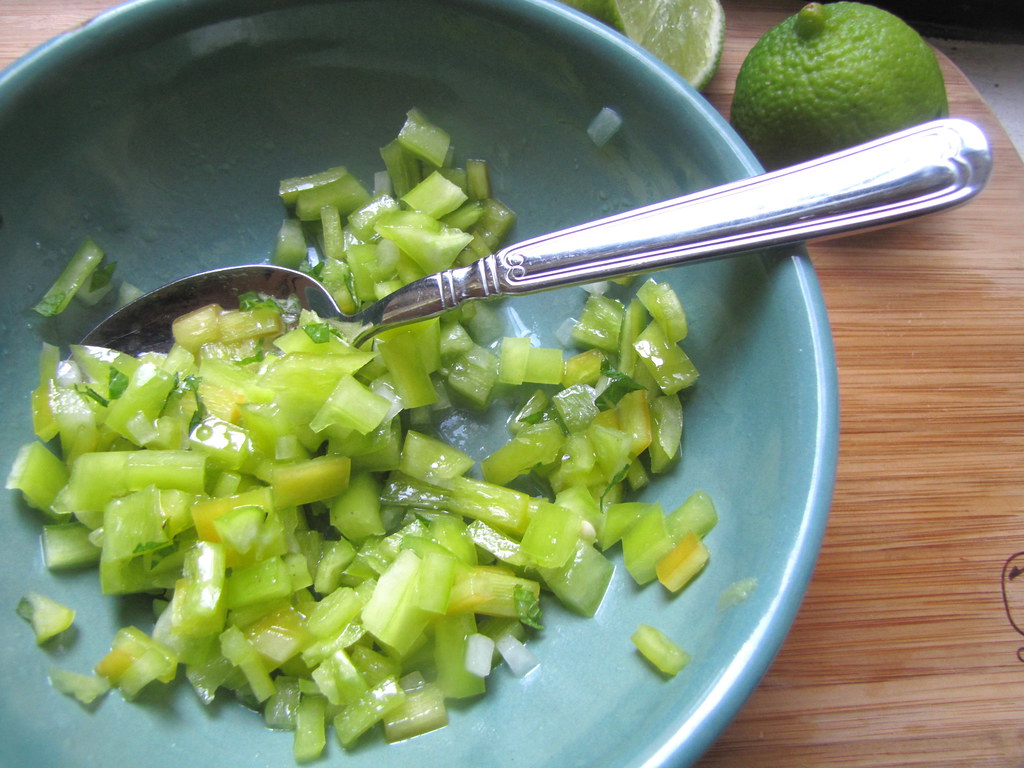 a remaining fresh pepper is combined with lime juice, onion and fresh mint for a tangy topping


Once the rice and beans were done, the reserved chopped peppers and some onion were given a toss in olive oil, lime juice, and a few snips of mint from my houseplant. Such a cooling, crunchy contrast for such a hearty meal. Oh, and I also smothered the warm beans and rice with some shredded pepper jack cheese to melt on top first. Hope you enjoy this — and make enough for leftovers — soon.

Add the stock and bay leaf. Bring to a boil, then reduce heat to a low simmer. Let simmer uncovered, stirring occasionally, for about 20 minutes or until rice is tender and stock is all absorbed. If necessary, add more stock to continue until rice is cooked. Season with salt and pepper to taste.

Meanwhile, heat a tablespoon of olive oil along with the remaining minced clove of garlic in a small pot. Add the fully-cooked and drained beans (either canned and well-rinsed or soaked and cooked from dried) along with one cup of water. Bring to a boil, then reduce to a gentle simmer. Stir occasionally and cook until beans and their cooking liquid are to desired consistency. Add seasonings to taste.

Combine the reserved chopped pepper with the reserved tablespoon of chopped onion. Mix with about half the juice of the lime, a drizzle of olive oil, a pinch of salt, and the chopped mint leaves. Serve the beans and rice together, and top with the grated cheese. Spoon the salsa on top. Serve the additional half of the lime in wedges on the side.

Three brownie points: Rather than indulging in fatty Mexican take-out food, you just sated the same tastebuds while making a fresh, heart-healthy, whole grain and protein-rich meal. Focusing on the basics — beans and rice — you’ve covered a lot of your nutrition for the day, with plenty of fiber and protein from the beans, as well as rice if using brown rice. These whole foods are also very filling, and contribute to a more stable energy level rather than refined flours like those in flour burritos. There’s no cholesterol to be found except for the indulgent (and optional) sprinkle of cheese, and extra vitamins from the peppers and fresh lime.

Eight maple leaves: You can make beans and rice with the addition of any fresh vegetables to be found, but you won’t get that classic taste of fresh pepper and tomato in it except in the summer, when these produce are at their peak. Enjoy it now, and add more herbs than just mint if you’re growing them at your home, too.