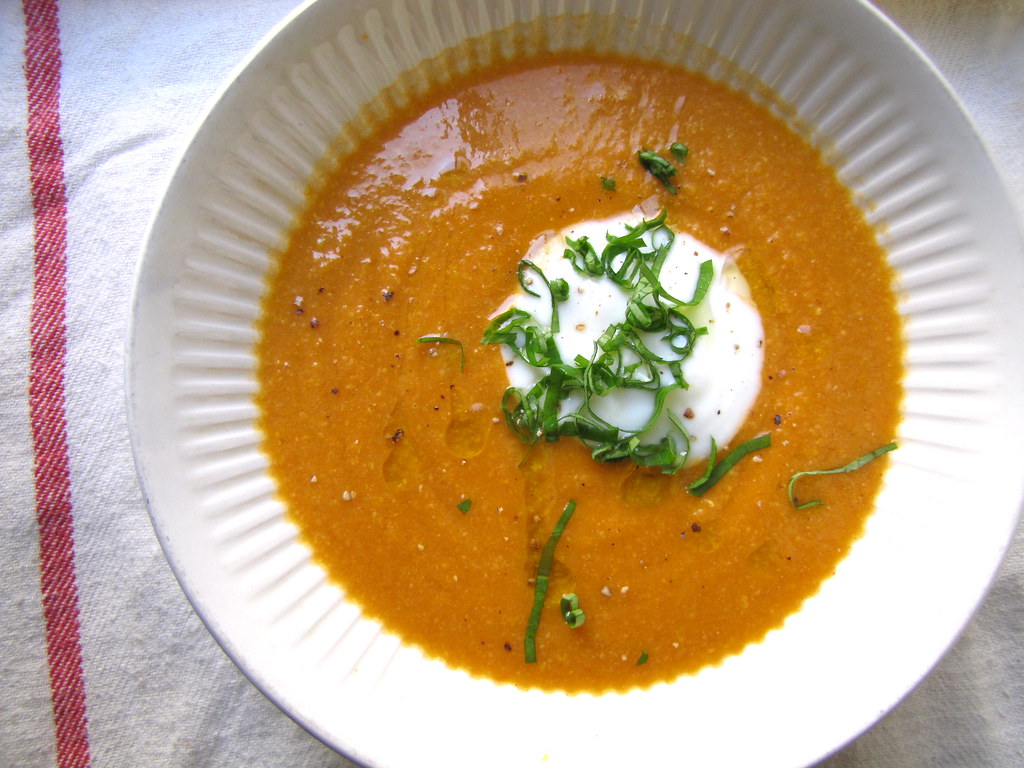 If you have a few favorite ingredients to cook with, you’re bound to run into a moment of deja-vu pretty soon: “Did I just make the basically same thing last week?” Sometimes, you can set out to make a wholly different dish one night and find that you dined on an incredibly similar one the night before (and sometimes, this happens knowingly, like a weekly breakfast routine). But when it happens by accident, it’s a sure sign that that you and said ingredients are star-crossed lovers, at least for the time when they’re in season. And so I found myself pureeing up a very similar soup to a chilled gazpacho I made a few weeks ago, with fresh corn and tomatoes, only thinking initially that I was making an entirely different, hearty bisque.


I’m not sure about calling this one a bisque in the end, since I didn’t add any cream. Just a dollop of yogurt, a drizzle of good olive oil, and some basil chiffonades on the bowl to finish. Corn and tomatoes (my Romeo and Juliet of the month) are really only in season in late summer, so why heap them with heavy cream instead of these more refreshing fixes? I finally decided. 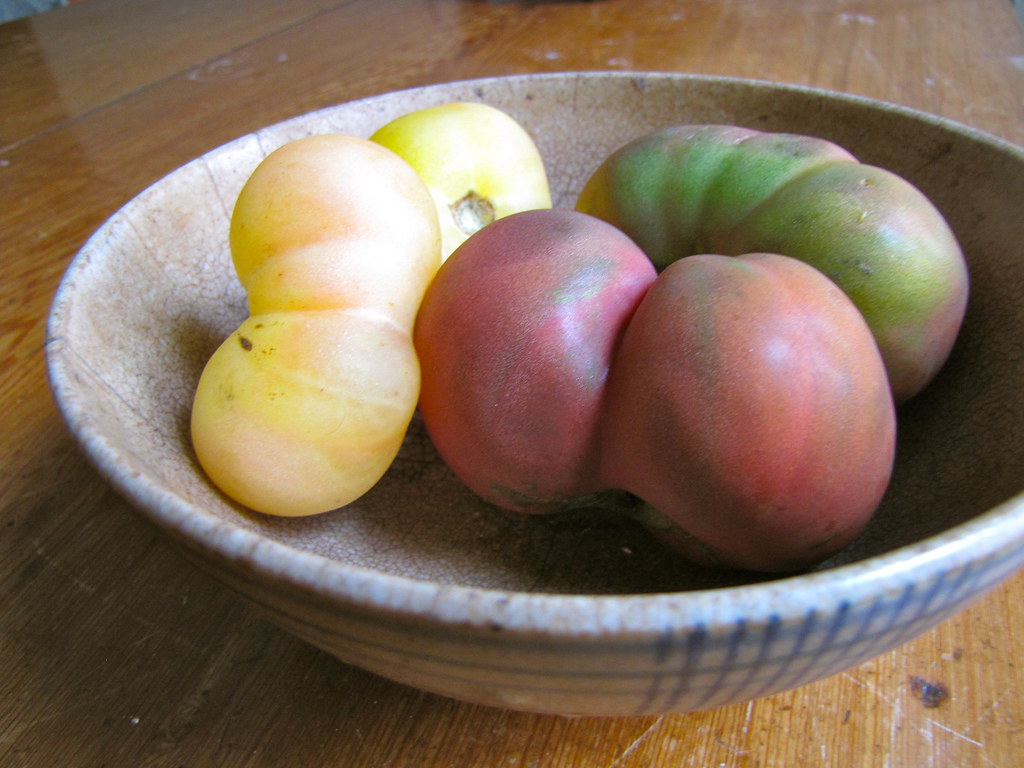 
Instead of blending fresh garlic and onions like that gazpacho earlier this summer, I went with the more traditional soup-making route of sweating them in olive oil, along with a stray chili pepper, until soft. I also decided to roast my tomatoes, in a hot oven, until their skins burst with juice. Heirloom tomatoes might not be best served by treating to such extremes, but I had a few that had gone for a day or so too long and were getting mushy to begin with. These included a bulging brandywine, and a couple unique “peach tomatoes” found at the Greenmarket one day. They’re almost as sweet as peaches, and have a pale yellow, translucent skin with reddish streaks. 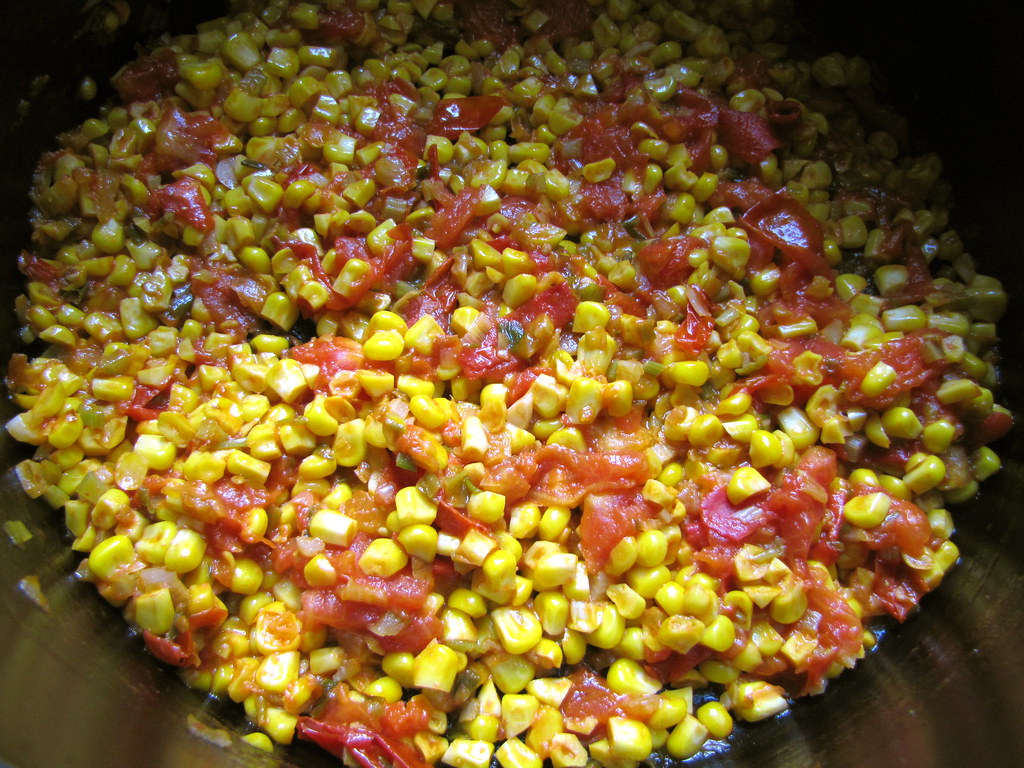 
Roasting the tomatoes concentrated their sweetness even more, and that deep red-fleshed brandywine turned the entire soup a vibrant shade of orange. The kernels from two ears of corn were combined along with them in the pot, as well as some vegetable stock made with the addition of their stripped cobs. Then, just like that gazpacho, I passed the mixture through a fine-mesh sieve to strain out the kernel skins (those annoying, fibrous pieces that get stuck in your teeth when eating corn on the cob). The resulting soup was so hearty and rich, bursting with ripe tomato and sweet corn, that I didn’t want to mellow it out with any milk or cream. 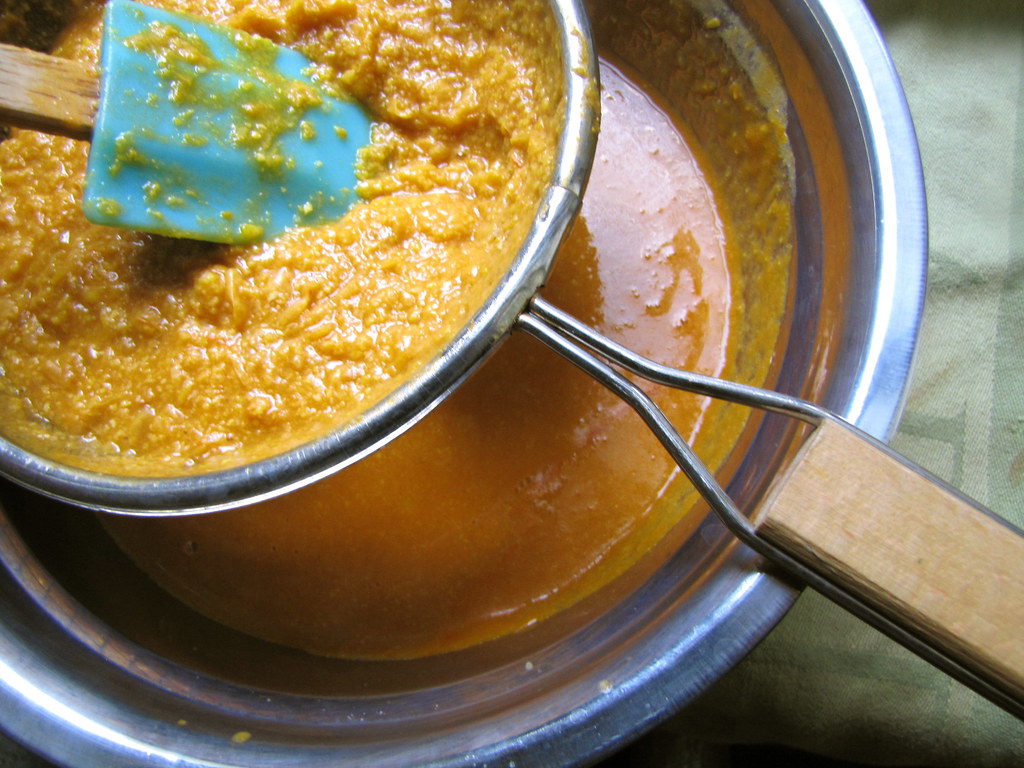 passing the mixture through fine mesh for a smooth soup 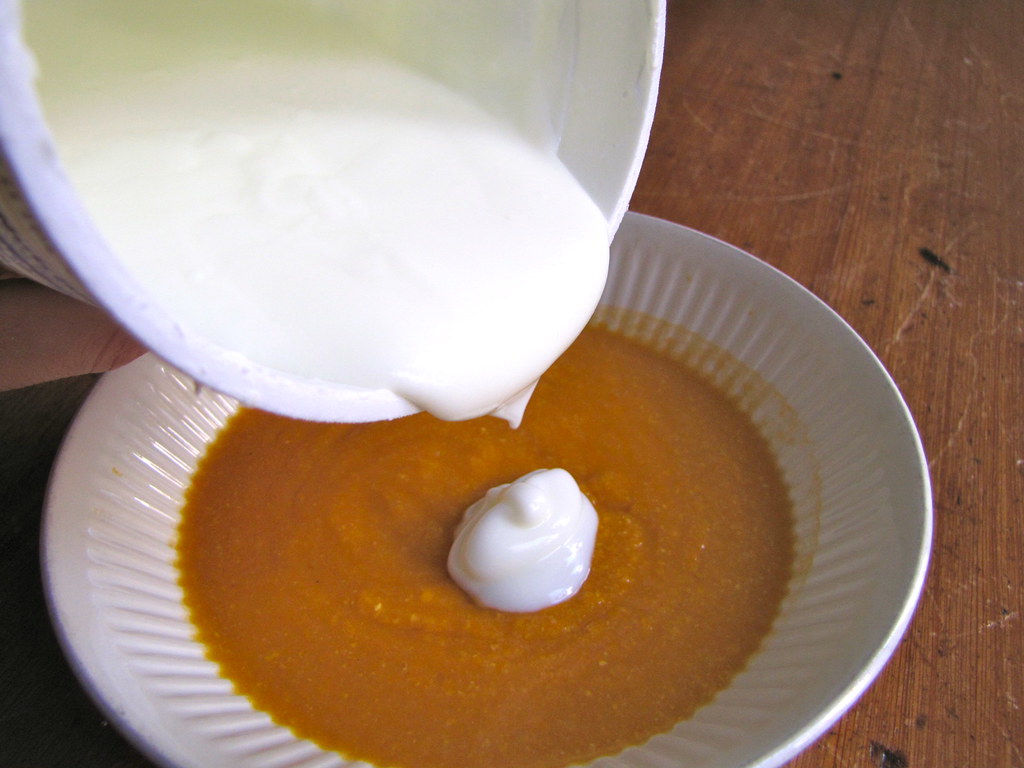 a dollop of plain yogurt enriches each bowl


You can serve this soup chilled or warm, depending on how hot it is that day. Lately, it has not been very kind weather for a hot bowl of tomato soup. That was fine, because after chilling in an airtight container overnight, the soup was even better-tasting than fresh off the stove. I’m thinking of freezing the rest to pull out in the dead of winter, when I’m missing my long-lost summer loves.

Heat the olive oil in a large, heavy-bottomed saucepan or Dutch oven over medium-low. Add the onions, garlic and optional chilies, and a pinch of salt and pepper. Cook, stirring occasionally, until onions are translucent. In a separate pot, heat up the stock along with the stripped corn cobs (you may need to break them to submerge them fully) and one extra cup of water. Let the stock cook with the corn cobs at least 20 minutes before straining to remove them.

Preheat oven to 400 degrees. Remove the cores from tomatoes with a pairing knife. Cut tomatoes in halves, and place cut side-down on a greased sheetpan. Roast for 8-10 minutes, until juices have bubbled around the sides and begun to caramelize a little (but not burn). Transfer the tomatoes into the pot of softening onions and garlic. Ladle some of the hot stock onto the sheetpan to scrape off any of the browned bits and add this to the pot as well. Cook mixture, stirring, until the juices have mostly evaporated and the mixture is becoming a little dry, about 5-10 minutes. Add the corn kernels and cook, stirring occasionally, another 3-5 minutes. Add all the strained stock and bring to a boil. Reduce to a simmer and cook, covered, for 30 minutes. Puree the soup with an immersion blender or by transferring to a blender or food processor.

Transfer the soup to a fine-mesh strainer or food mill and pass through the liquids while catching the skins and any other solids (discard them). Taste soup for seasoning, adding extra salt and pepper, and the optional Tabasco sauce to taste. Serve immediately with a dollop of the yogurt in the center of each bowl, a drizzle of olive oil, and a sprinkle of the basil chiffonades. Or chill overnight to serve chilled with the toppings.

Five brownie points: They say “fat is flavor,” but for this recipe, I went with “flavor instead of fat.” By roasting the tomatoes, and getting as much from the sweet corn for flavor by boiling cobs into the stock, you can create a handsome, complex flavor in soup that doesn’t have very much fat at all. Olive oil is the only added fat before the creamy dollop of yogurt (I go with whole milk yogurt for this). The yogurt is a great way to add probiotics in addition to creaminess, which heavy cream does not have.

Eight maple leaves: Now is the best time to get your hands on the best tomatoes of the year — and it has been a great year for tomatoes in the Northeast. Capture them for many purposes while you can, and save the rest. You can even snag a box of them from the Brooklyn Kitchen now for safekeeping in jars. Corn is another in-season ingredient locally, as well as the chilies and basil growing on my windowsill. Yes, cook, cook, cook, make stocks, sauces and soups to put up for later at the height of the harvest happening now.