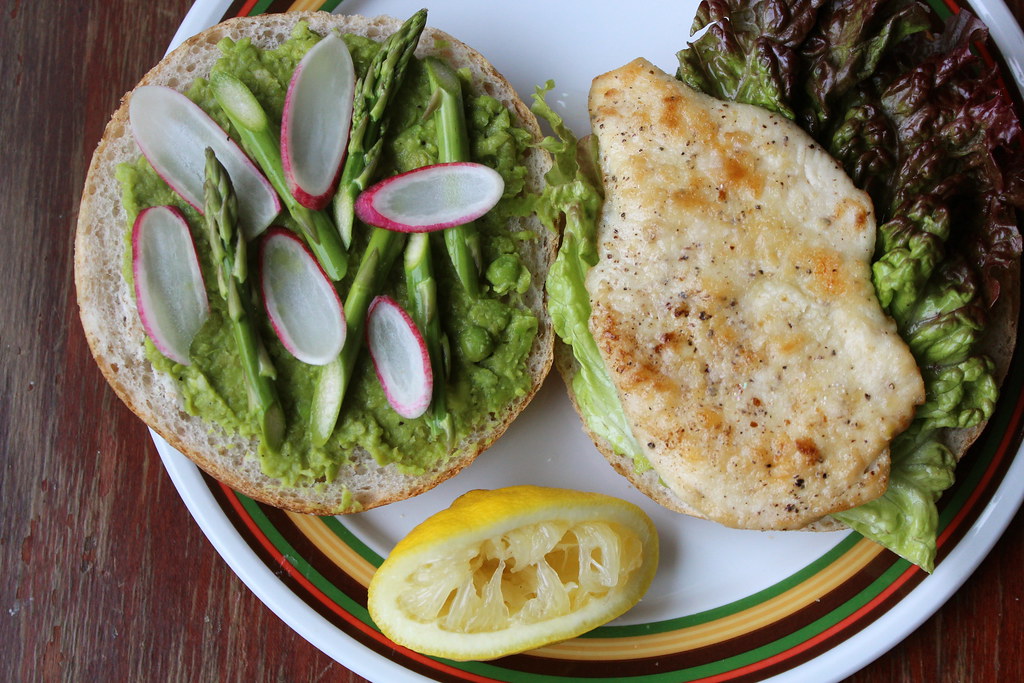 Why settle for sad tomatoes shipped in from somewhere it wasn’t ripened on the vine just because you’re craving a sandwich? We all love a juicy slab of beefsteak tomato at its peak of flavor on bread, but it ain’t going to happen in the spring. Fortunately, there are plenty of ingredients in their prime now, and with a little imagination — and acceptance — you may just forget the bloated, blood-red things even exist.


After all, new classics and cliches in food are being made every day, so someone’s got to initiate. This week, I’ve been cooking my way through a nice bunch of fresh asparagus, and each time stole a bite of the slenderest ones raw. Rather than being fibrous and woody or bland in taste, these raw shoots were jade-green, full of crunch and sweet juice inside. I figured they’d be the perfect candidates for quick-pickling in a mild vinegar solution with just a pinch of salt. 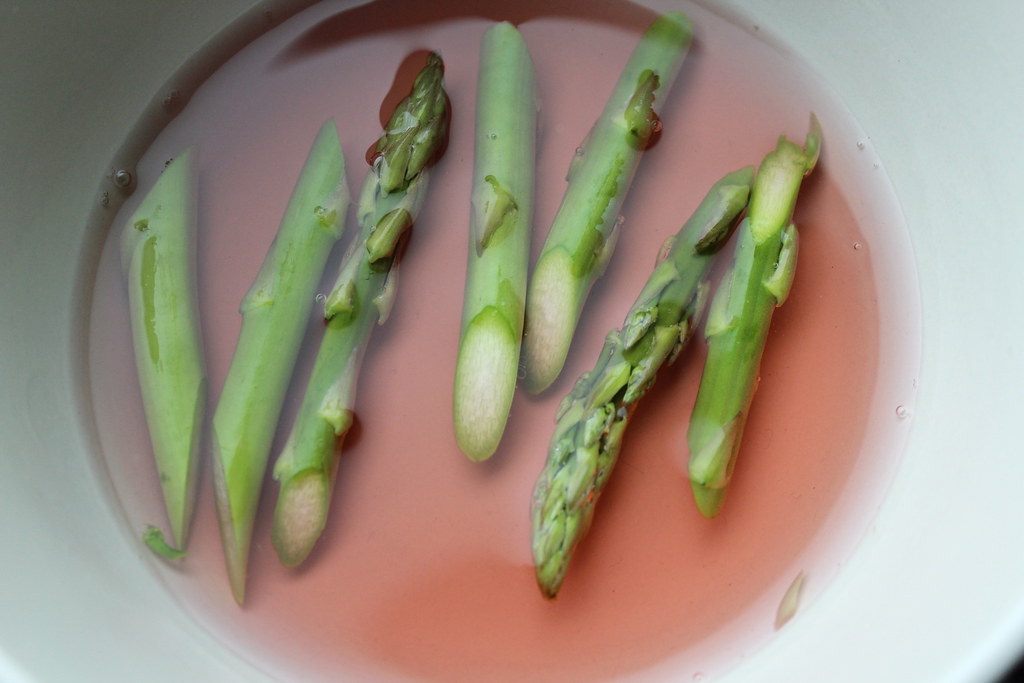 It was either these or the beautiful, bright-pink French breakfast radishes I’ve also been swooning over this spring. Even though radishes, unlike asparagus, can have multiple harvests throughout the year, those in spring surely couldn’t have been planted too long ago. Crisp and spicy, I thought I’d preserve these optimal radishes in their natural state. Instead, the asparagus would get a quick bath in a light brine, and afterward, become crunchier, juicier, and agents of tang. 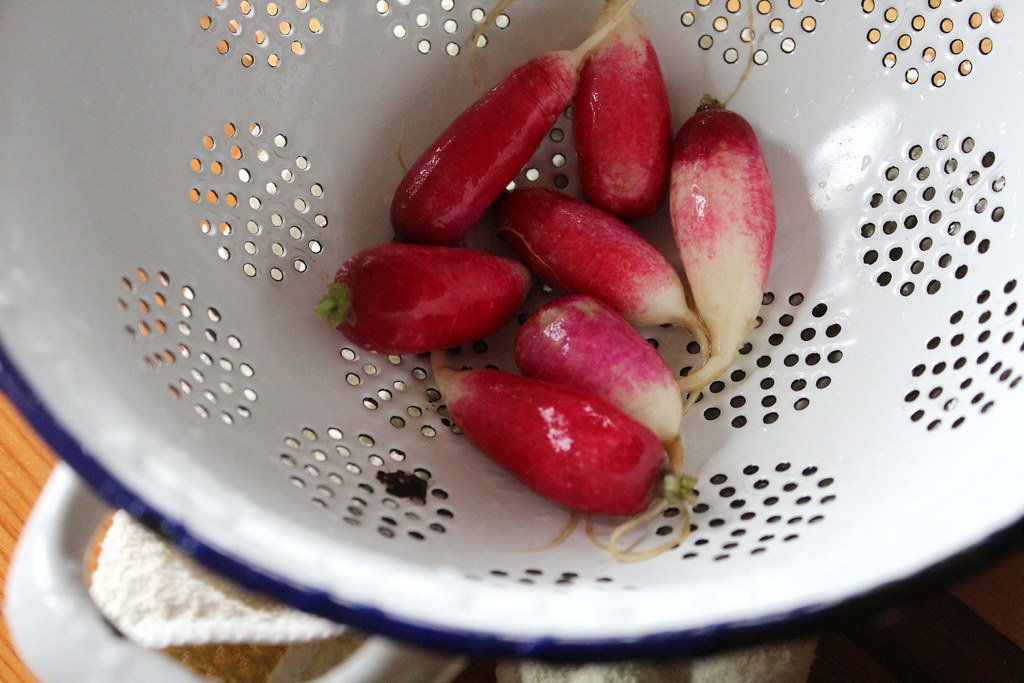 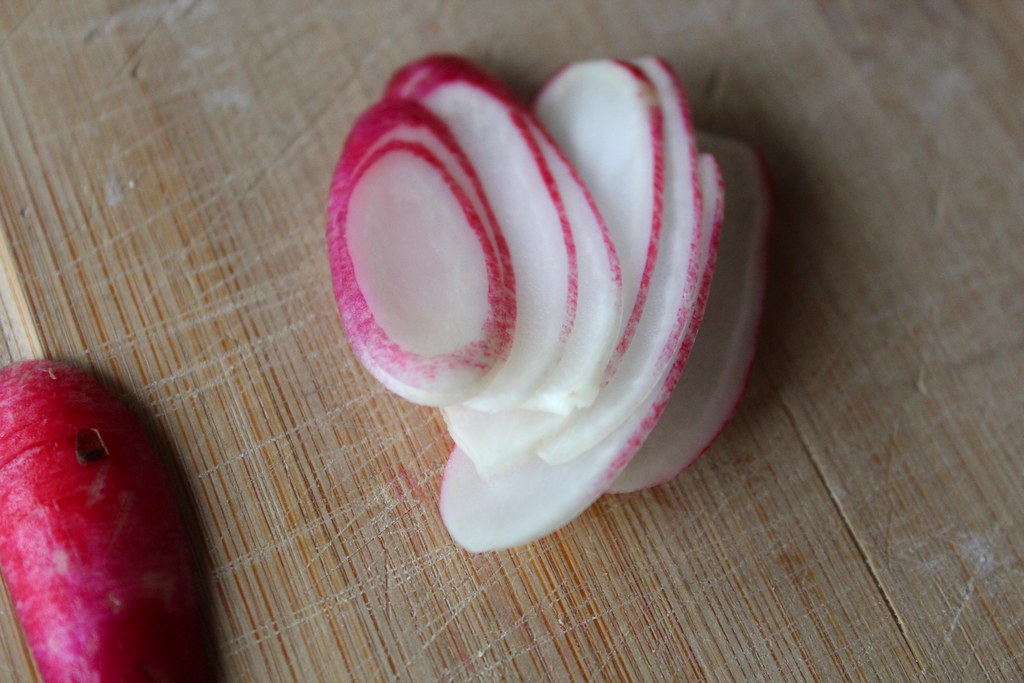 sliced up for a topping au naturel

Finally, you could add mayonnaise and perhaps flavor it with fresh, spring herbs like tarragon. But a lighter alternative, no less in-season and green: make a pea puree, with a small clove of garlic, squeeze of lemon, and olive oil. You’ll get the adhesive something-or-other you were looking to put on that bun, and lots of sweet flavor. Albeit, a slab of chicken breast is not the heaviest food item you can put between two pieces of bread; however, when the going’s this good you might as well pile up on green. 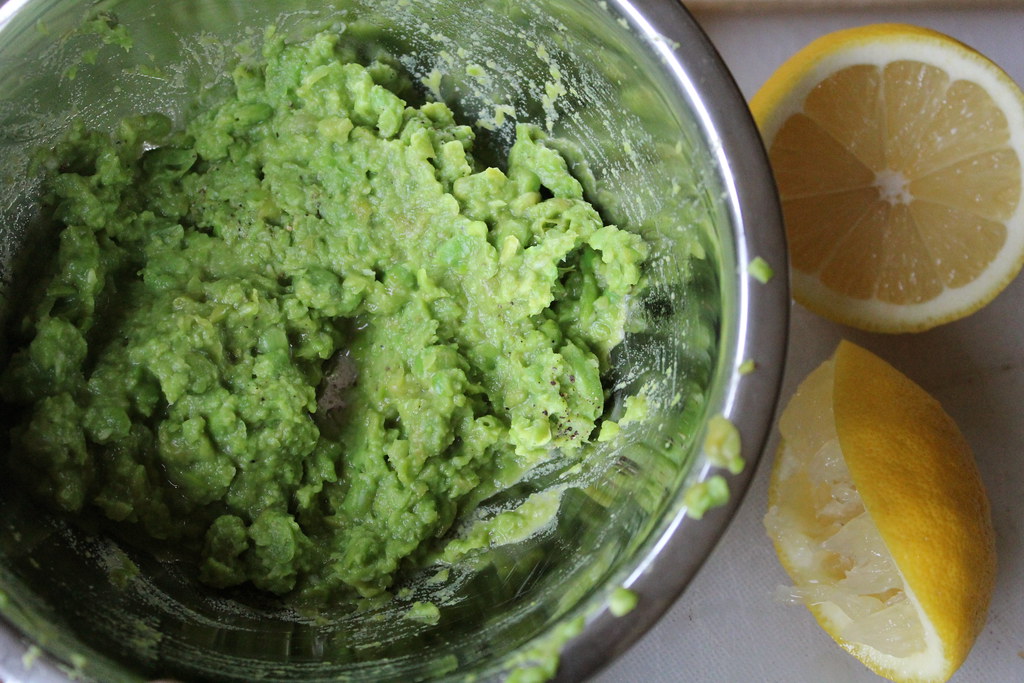 green peas are lightly mashed for a nutritious spread

I didn’t fuss too much with the thinly sliced chicken breasts I’d purchased that way; they seemed cut down just for this purpose. Gently seasoned, coated it in olive oil, and shaken with a little flour on its surface, it went onto a hot, cast-iron pan for a brown on both sides. If you’ve cleaned up the grill for backyard barbecues already, use it to lend the chicken some charred accents, too. 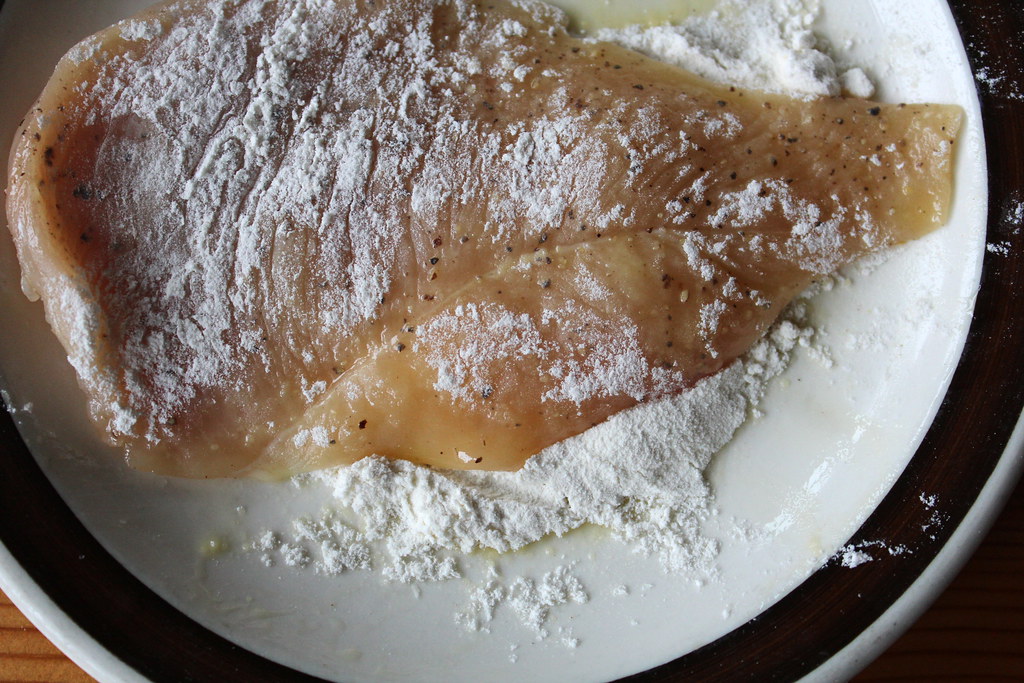 Is spring the best time of year to eat chicken, as well? As folk wisdom would put it, yes — when they’re young. But for better or for worse, almost all chicken produced for meat nowadays are less than a year old, even when they’re drug-free or Certified Humane like the ones I got from Pennsylvania-based Murray’s Chicken. Can you eat chicken from older hens, typically ones that previously laid eggs? Yes, but I wouldn’t recommend it for this sandwich. You can get such hens, often called “stew chickens” from plenty of farmers at the Greenmarket; tough and rubbery-fleshed, they’re better off for making stock, or stew with (and I’ve tried otherwise).

Long story short: some things are just better in spring. Savor them while you can.

To make the asparagus quick pickles, combine the vinegar and water in a small bowl and stir in the salt. Submerge the asparagus pieces in the solution, cover, and chill while you prepare the rest of the ingredients (or up to overnight).

Season the chicken breasts on both sides with salt and pepper. Rub in the olive oil, cover, and set aside.

To make the pea puree, boil the peas for 3-4 minutes until tender. Drain. Transfer to a food processor or use a hand blender and puree with the the lemon juice, olive oil, and salt and pepper to taste.

Heat a heavy-bottomed cast-iron or grill pan. Lightly grease the surface with an extra splash of olive oil. Spread the flour on a flat plate and lightly dredge the chicken in the flour. Place both on the pan and don’t touch for thirty seconds. Once bottom sides are gently browned, flip, and cook until lightly browned on the opposite side.

Meanwhile, spread the pea puree on the insides of both rolls. Add the optional lettuce leaves to the bottom of each and place the chicken breasts on each. Top with the sliced radishes and pickled asparagus (drained) and serve.

Five brownie points: I’m torn on this one, because it is such a lean take on a meal that could easily be highly caloric and heavy. But it is, after all, a chicken sandwich, even with the great fiber in the asparagus, antioxidants in the radishes, and protein in the peas. That tender piece of chicken breast won’t add too much cholesterol to your diet, however, and if you opt for a whole-grain roll, as I did, you’ll have more fiber to off-set the calories in it, too.

Eight maple leaves: Each ingredient was locally procured, lest for the seasonings of salt, pepper, olive oil and lemon juice. But while it’s an in-season dish, you can enjoy several variations on it throughout the year, when other ingredients that could be toppings are an option — like pickled onions and carrots in the winter, and, yes, juicy tomatoes in summer.