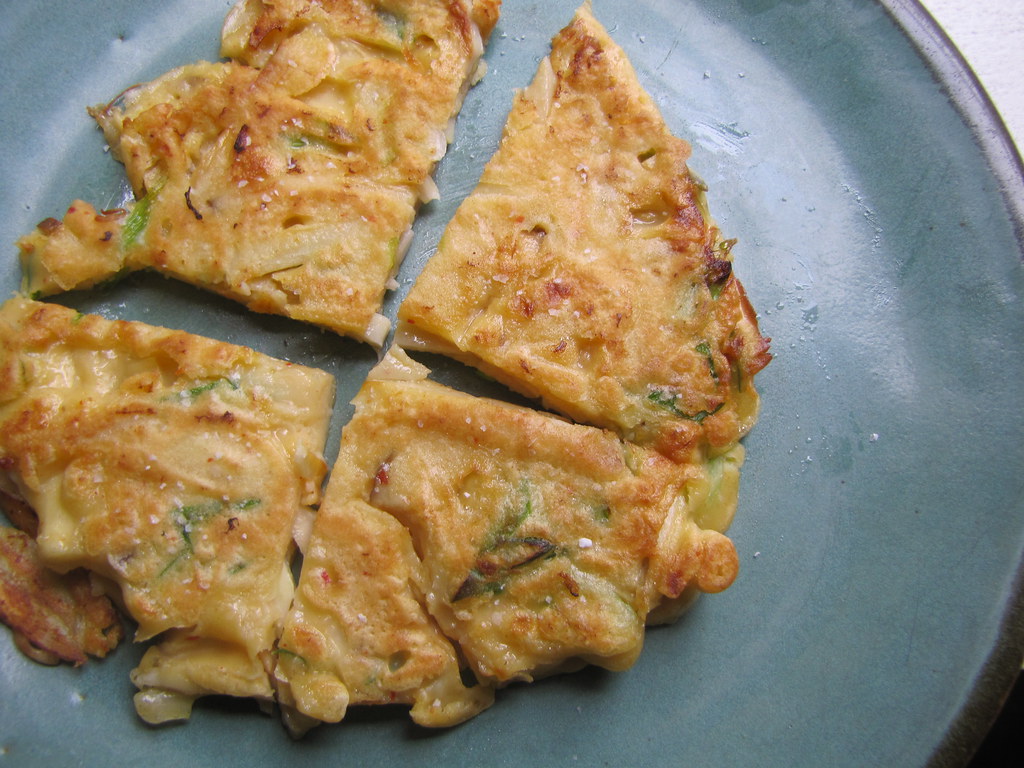 Whisk, ladle, sizzle, and flip. These four steps epitomized the quick weeknight dinner for me during a certain time, when all I wanted to eat were Korean-style pancakes stuffed with fresh vegetables and anything-goes in the fridge. Those, and dunk — the sound of soy sauce soaking up the tip of one of them before it crunched in my mouth. It was certainly quicker to make than fried rice or noodles, another practical way to toss in any number of ingredients with starch. And some of my friends liked the recipe I posted for it one time so much that they became addicted at times, too.


But those days had long been replaced with other phases of weeknight eating — the spaghetti stage, the black beans and rice era, etc. Until, some three or four moons and one apartment change later, the craving came back. 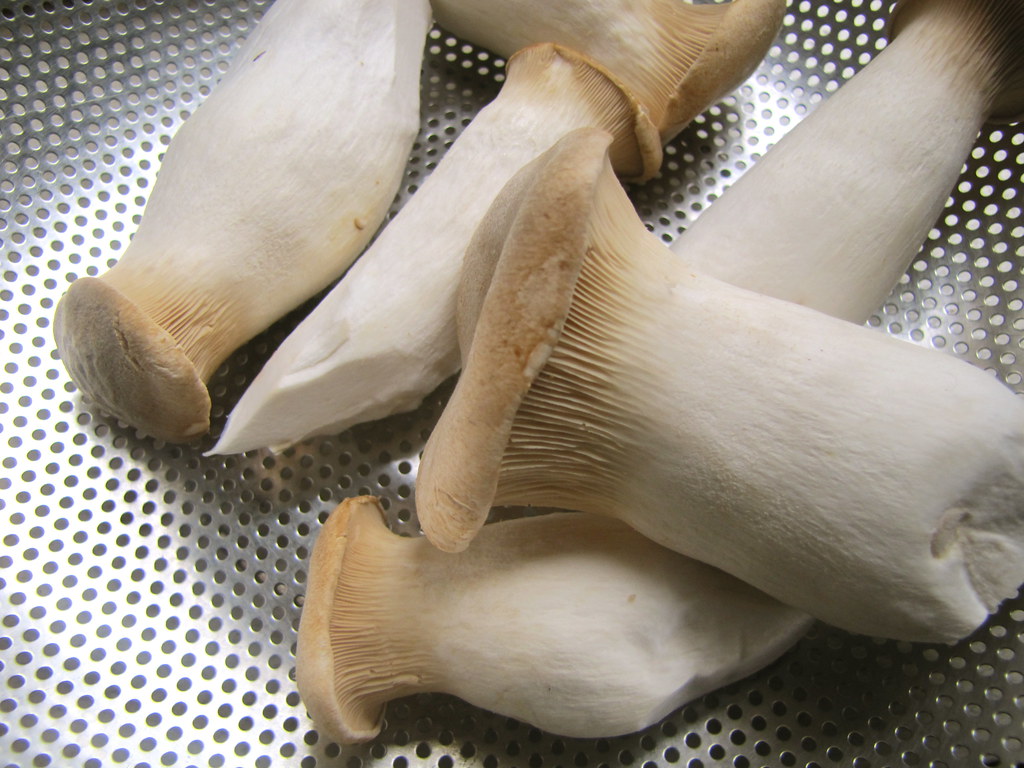 Trumpet mushrooms (aka King Oyster, or King Trumpet mushrooms) were not the first choice that came to mind for them. When making these savory, Korean-style pancakes (or pa jeon), extra ingredients like shredded meats, seafood, vegetables and kimchi are added to the batter after it’s been mixed up. Mushrooms are great for this mix, but the elongated, bloated stems and relatively small bells of trumpets didn’t seem too apt. But they’re tasty, meaty-textured fungi, and when sliced into matchsticks, they softened quickly as the batter firmed up in the pan.

It was such an unusual addition for me that I thought I’d see them shine more or less on their own, with only chopped green scallions to cement the savory tone. (A must-have for me in pa jeon, Chinese scallion pancakes, as well as okonomiyaki, a close relative of both from Japan.) 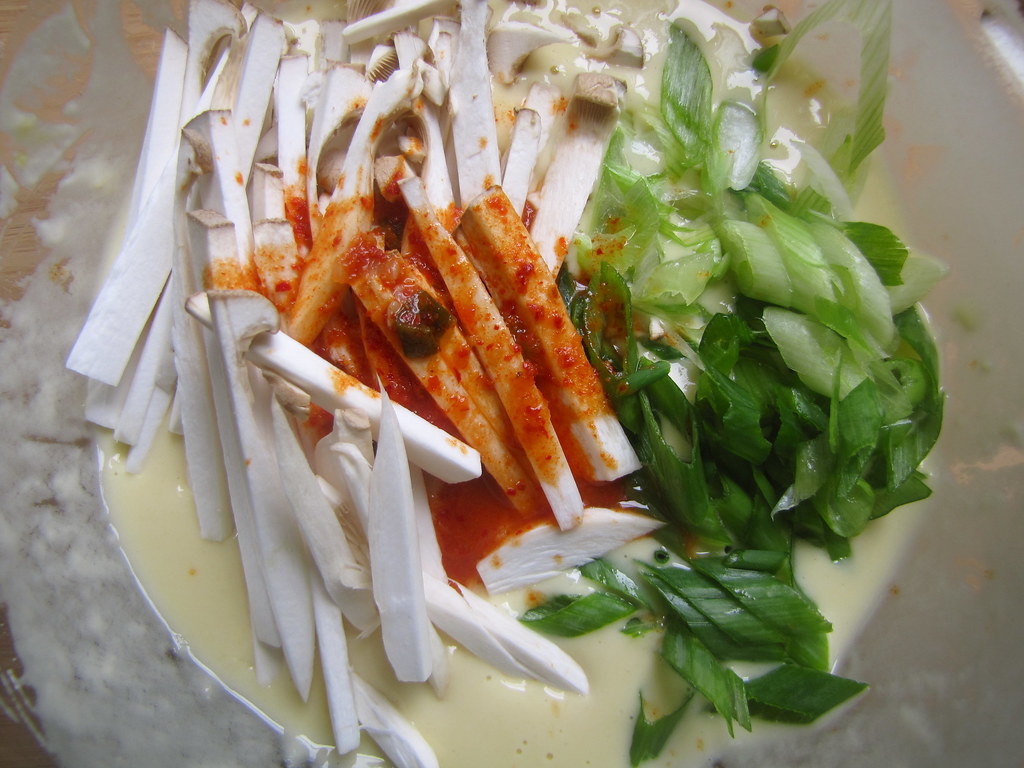 a splash of kimchi brine is added to the batter

It was easy enough to execute, and one trumpet mushroom went a surprisingly long way. So the next time I tried making them, I browned the julienned mushrooms first, to let them cook and color a little longer on their own. And because I was craving something a little spicy and sour, I poured in a bit of brine from the bottom of a nearly spent jar of kimchee, instead of the fermented cabbage leaves themselves. It turned the pancakes from dull tan to a sunny shade of orange. With a sprinkle of salt on their crisp tops, I skipped the dunking in soy sauce step this time.

Add a tablespoon of the oil to a large fry pan and once it’s hot, add the mushrooms. Season with a pinch of salt and cook on high, stirring occasionally, until mushrooms have just begun to sear and soften. Transfer to a bowl to let cool down.

Whisk the egg, milk, 1/4 tsp salt and kimchi brine in a large bowl. Sift in the flour gradually while whisking to incorporate, eliminating lumps. Whisk in the baking powder. Fold in the chopped scallions and slightly cooled and sauteed mushrooms.

Heat the pan with the remaining oil and once hot, drop in a ladle of the pancake batter. Once the batter begins to bubble on the surface, peek underneath and if lightly browned, flip. Let opposite side brown a bit and transfer to a serving plate. Repeat with the remaining batter. Sprinkle pancakes lightly with salt and cut into wedges to serve.

Five brownie points: This dish will probably satisfy your craving for something salty and greasy, and works great as a substantial appetizer. But it’s not the most healthful meal-in-one, despite all those ones I’ve savored. The flour could be blended with whole wheat or perhaps buckwheat flours for more minerals and slowly absorption of sugars to improve on that. The drips of kimchi juice, however, is a good way to add flavor without fat.

Seven maple leaves: I’ve spied trumpet mushrooms at the farmers’ market for a long time and finally splurged on them on recent occasions. It’s always fun to explore something new that your local farmers are growing, and should help keep them offering different things. The scallions were also found there, and the egg and flour, too. And kudos here for using an oft-wasted portion of one food — kimchi — as a flavoring agent instead of chucking the jar when the cabbage is eaten up.