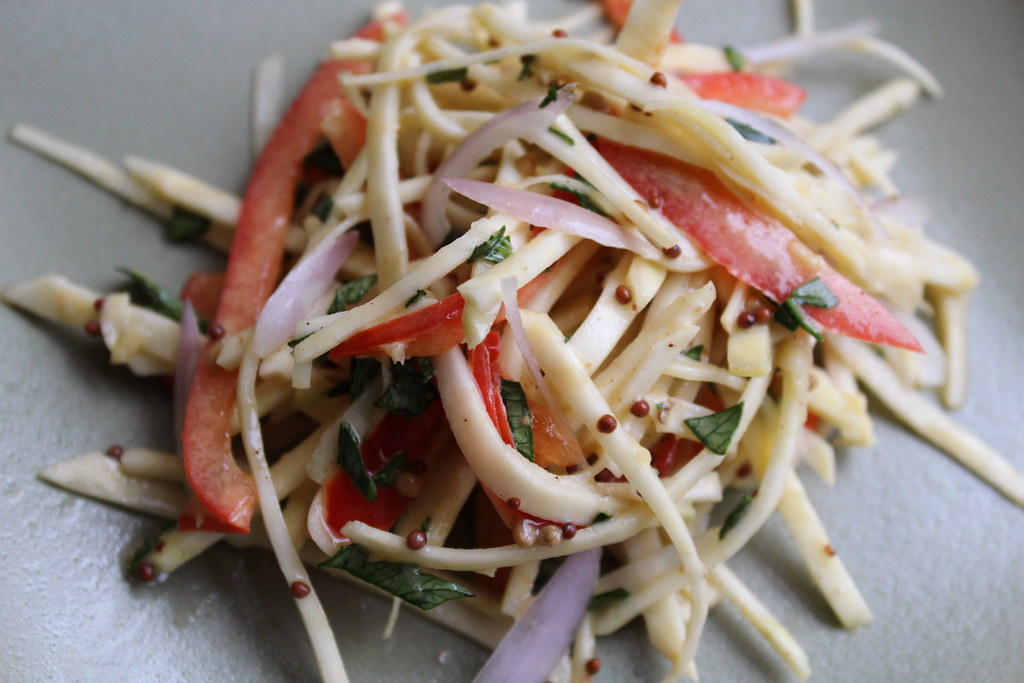 Covered in grime, knobby as a goblin, and incredibly fibrous and tough, celery root deserves a place in the “Now who’d have thought to eat that first?” category of foods. But perhaps once one was sliced into, and its gruff shade gave way to a moon-like pallor, and a deliciously fresh scent was released; that may have been enough to compel one. And since then, many have done much to showcase the unlikely edible’s charms. Like slicing the root finely, and dressing it fresh. 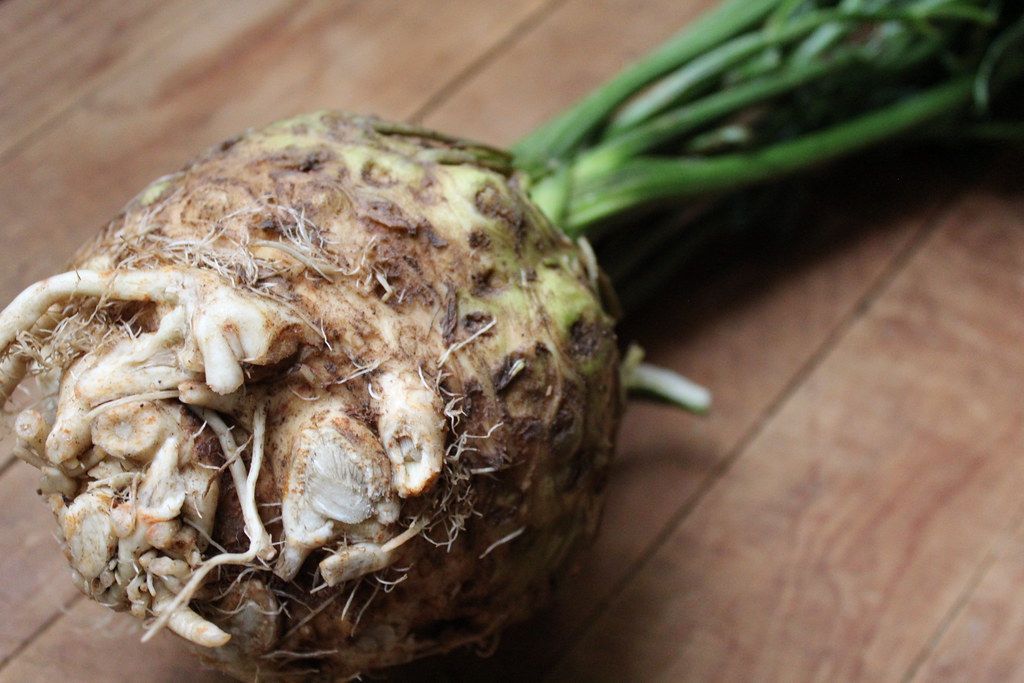 This preparation takes root (get it?) in traditional French and German celery root salads, where the roots are julienned and tossed in a heavy sauce. I’ve added a hearty portion of whole grain mustard to my version of it here, and have thrown in some thinly sliced red bell peppers as well as shallots, for more color. But instead of making a cream-based dressing or traditional mayonnaise to slather it all in, I whipped up a homemade aioli for a little garlicky bite. 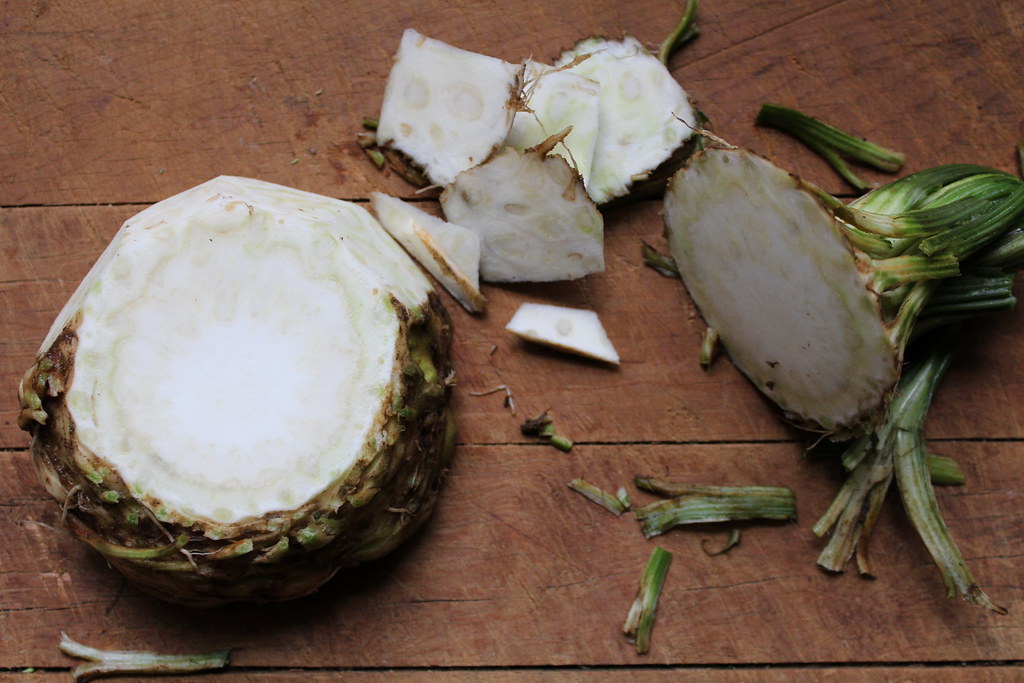 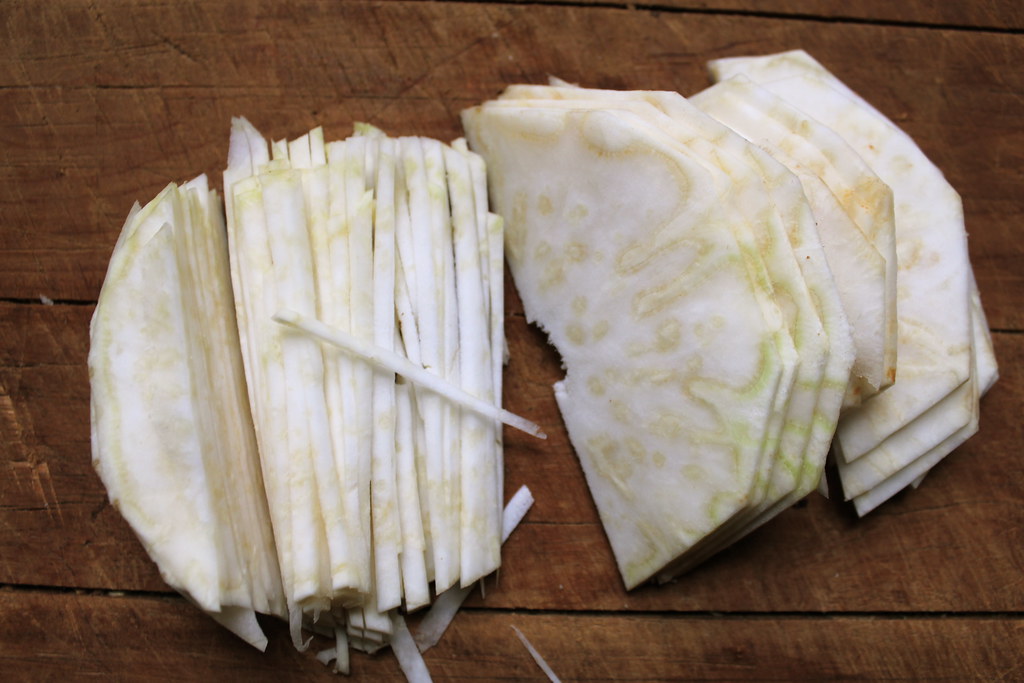 shredding a celery root without a mandoline

There’s no need for a fancy tool to create thin matchsticks of celery root, if you’re decently comfortable with a knife. After cutting away the thick hides of the root, I try to slice it as finely as possible from half-rounds. Stack those up, and slice again into matchsticks. It might not be a perfectly even julienne that you cut, but that can be a fun challenge to work on as you make this salad again and again.

Because it is so tough, these celery root matchsticks won’t seem very palatable at first. They taste a bit dull fresh, but benefit greatly in both flavor and texture when tossed in the dressing and made ahead. I’ve read some recipes that call for cooking the julienned root first, in order to soften them even more. But I like the sharp, raw snap that they give served this way, with enough time to soak with everything else. 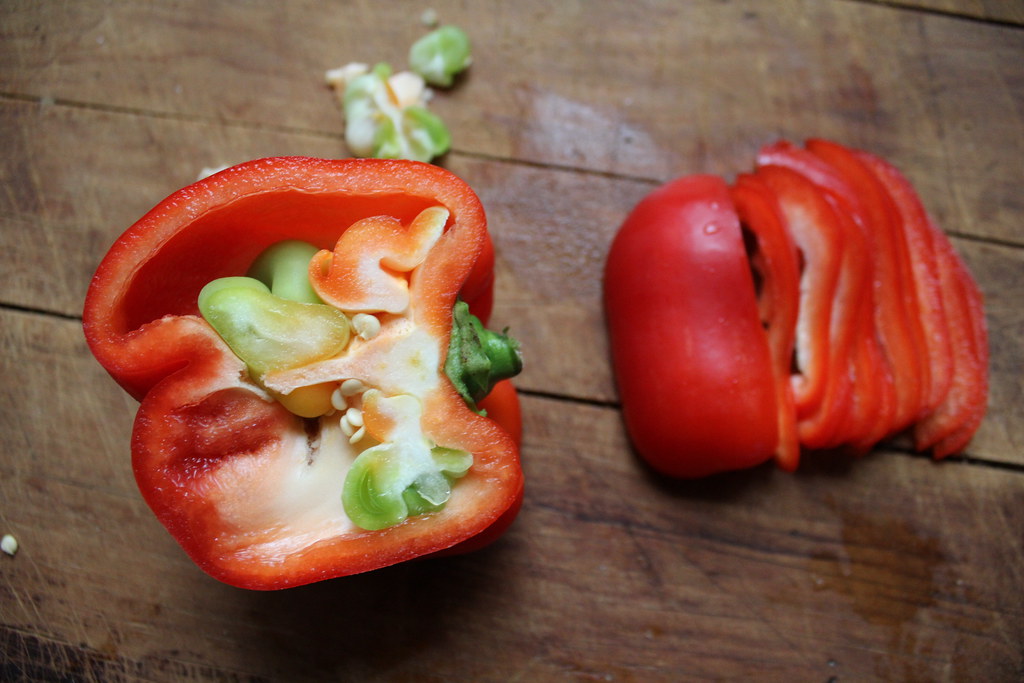 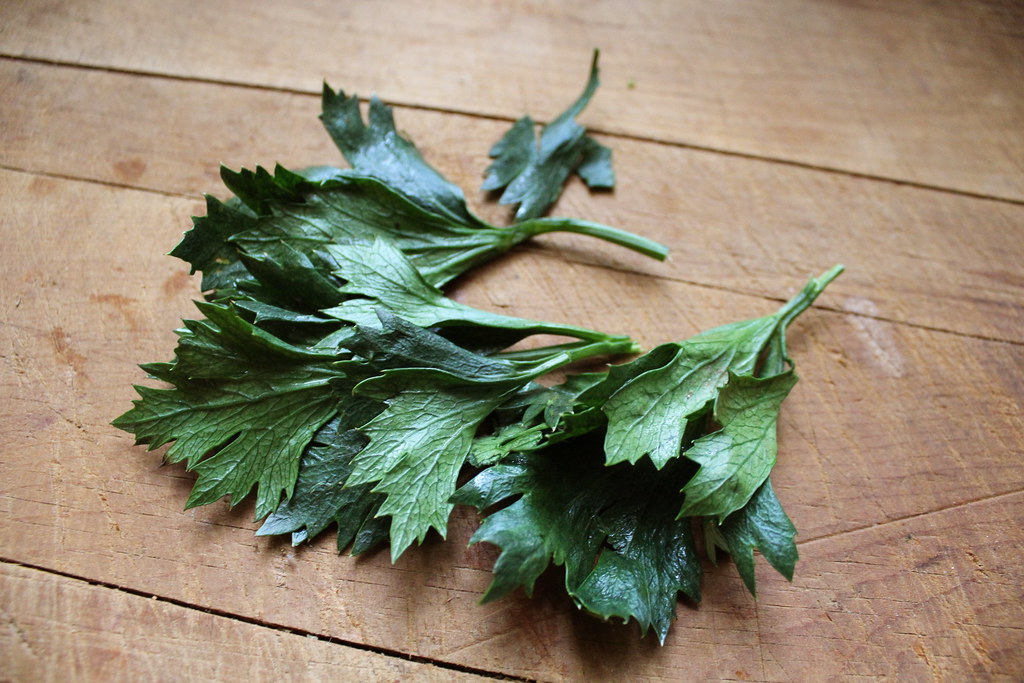 How fortunate to find so many summer vegetables at the market on the first day of October. There was corn, zucchini, and peppers of every shade. The celery root, on the other hand, was my first spotting of it for the season. Looking forward to some Brussels sprouts hopefully soon.

One great plus about getting celery root when it’s fresh and just in season is that you can find them with their shoots — that is, celery — still attached. This goes for most other root vegetables found at the Greenmarket, like beets and carrots. The “celery” stalks of a celery root however are incredibly thin and dry compared to the crisp, watery stalks that we’re used to seeing. (This is because the plant was specifically grown for its roots, not its stalks.) They’re actually more leaves than stalk. But those little green stalks are very flavorful and good for cooking with (I’ve just made a hearty vegetable stock using them), and so are their leaves. Both are quite tough, but when you finely chop the celery leaves, they can make a fragrant garnish and even pass for parsley. 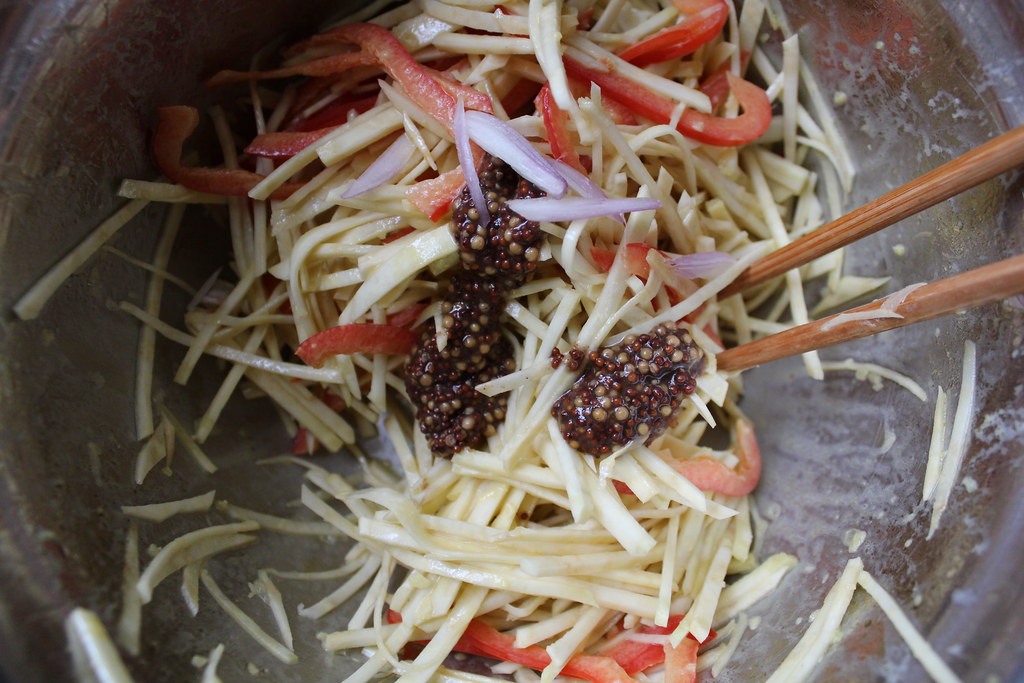 tossing it all up

Imagine all of the other stuff you can throw into this salad! Or not — the plain old roots themselves, tossed in the same dressing ingredients, tastes great as well. Of course, you could always swap in store-bought mayonnaise for the aioli in the recipe below, but I’ll encourage you learn to whisk oil into an egg yolk instead next time. That’s basically how you produce both of them, although aioli has crushed garlic in it and olive oil, instead of a neutral-tasting one. No mustards are made alike, too, so you may want to adjust the amount that you use depending on its intensity. I recommend something grainy and a little bit sweet, but not too strong. Then, I suppose you could make your own mustard, too. Fortunately, I’ve got My Friend to take care of this condiment.

Rinse and scrub the celery root, and remove from any stalks. Cut in halves and cut away the thick outer surface with a knife. Finely slice each peeled half and stack up the thin slices in order to julienne next. Transfer julienned pieces to a large bowl and be ready to work with them right away, as the celery root will oxidize quickly.

Make the aioli: Beat the egg yolk and while beating rapidly, pour in a couple drops of the oil to emulsify. Still whisking rapidly, very slowly drizzle in the remaining olive oil, stopping to make sure that the mixture emulsifies and begins to thicken. It will turn lighter in color if so, and gain a creamy consistency. Once all the oil has been added, combine with the garlic and season with salt and pepper to taste.

Combine the julienned celery root with all the remaining ingredients, including the aioli. Toss well and adjust to taste. Cover and chill for at least 30 minutes before serving, or up to overnight.

Five brownie points: Celery root has an interesting mix of health benefits, especially when eaten raw. I’ve been saying fibrous over and over, and it is indeed full of fiber. Also, it’s a great source of potassium, and Vitamin C, to keep your immune system strong. Like the more familiar stalks of celery though, celery root is naturally high in sodium. The oily, aioli-based dressing here is not the lightest way to prepare a salad, but it at least uses mostly heart-healthy, plant-based fats (from olives) in much greater proportion to the bad ones (from the egg yolk).

Eight maple leaves: So simple yet tasty, this salad takes only a few plants to make. If you’re lucky, as I was, you can find them freshly picked at a farmers’ market — or substitute ingredients such as the red pepper for a carrot, when it gets later into fall. Making your own mayonnaise, or aioli, or salad dressing, also ensures that you’ve got just a few ingredients in your condiment rather than processed ones, or chemical additives, and no need for a disposable container if you make a fresh batch for one or more uses at a time.