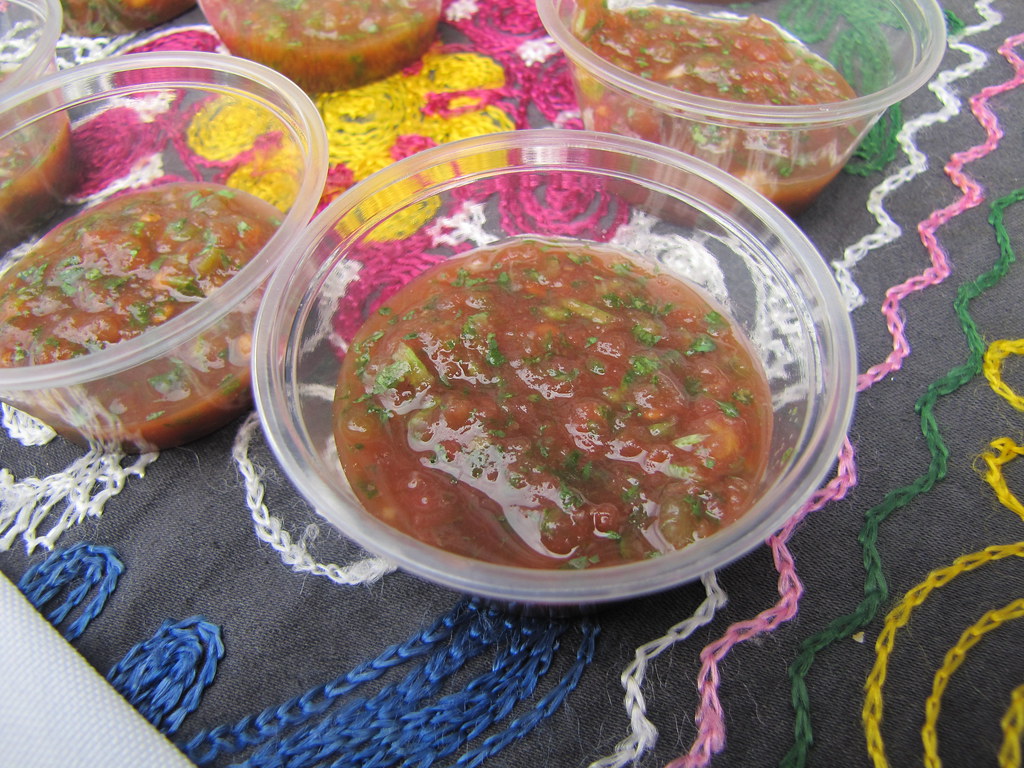 While stuffing tortilla chips into paper bags in preparation for the second-ever Salsa SF Food Wars last Sunday, a fellow volunteer wondered aloud whether many of the contestants would stick to making salsa, as the locals all know it. “Not pico de gallo,” she clarified. I had to squirm. As a New Yorker, I’m used to a chunky mixture of fresh tomatoes, onions, cilantro and peppers — pico de gallo — as the quintessential bowl of “salsa” at a barbecue. Not a thin, flavorful sauce that you can blanket a chip with, or drizzle onto a taco for extra juice, be it red, green, creamy-orange, or anywhere in between. Well, I was certainly schooled in salsa-making over the course of the day.


So I’m thankful to SF Food Wars for putting on the event, and having me tag along as a volunteer. This event was created by Jeannie Choe in 2009, and over the past two years has held almost a dozen amateur cooking competitions in various foods. Pies, mac ‘n cheese, “breakfast,” and salsa have each lured some twenty cooks and their best concoctions out of their kitchens to compete. Geared with prizes from food businesses in the Bay Area, and in partnership with CUESA (The Center for Urban Education About Sustainable Agriculture), its main benefactor, SF Food Wars usually sell out to the public weeks in advance. 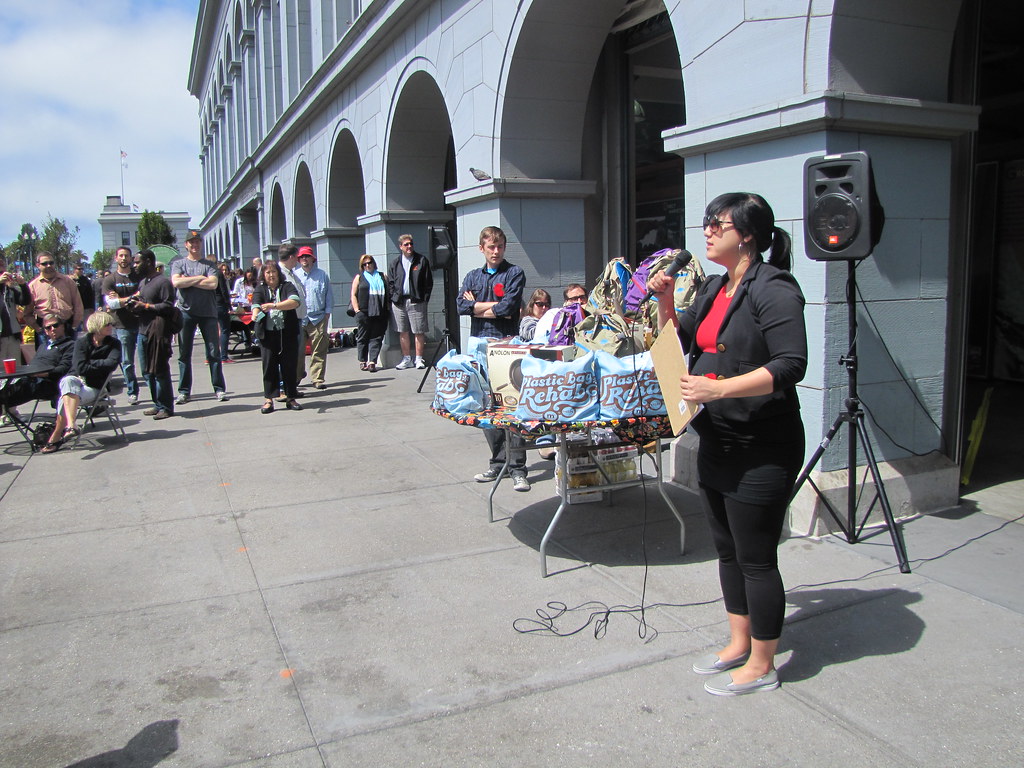 Sound a bit familiar, Brooklynites? Dirty secret: Jeannie relocated to San Francisco four years ago from our turf. A few months later, she got “bitten by the food bug,” and put her mind to figuring out how to throw a cook-off in her new community, even calling me up for advice. Well, she did — with flying colors. Most impressive is that all of the contestants are encouraged to use local produce thanks to CUESA’s involvement, and the fact that the events are held at the historic Ferry Terminal Market Building in San Francisco, home to a farmers’ market two days of the week.

The colors, spices, and sweet tastes of summer were all proudly on display for this salsa-themed food fight, as tasters searched for that perfect combination of refreshment and heat. Although the Californians sure know a proper salsa from pico de gallo, there was still quite a variety of flavors and fruity add-ins along the tables to taste. A quick tour of some! 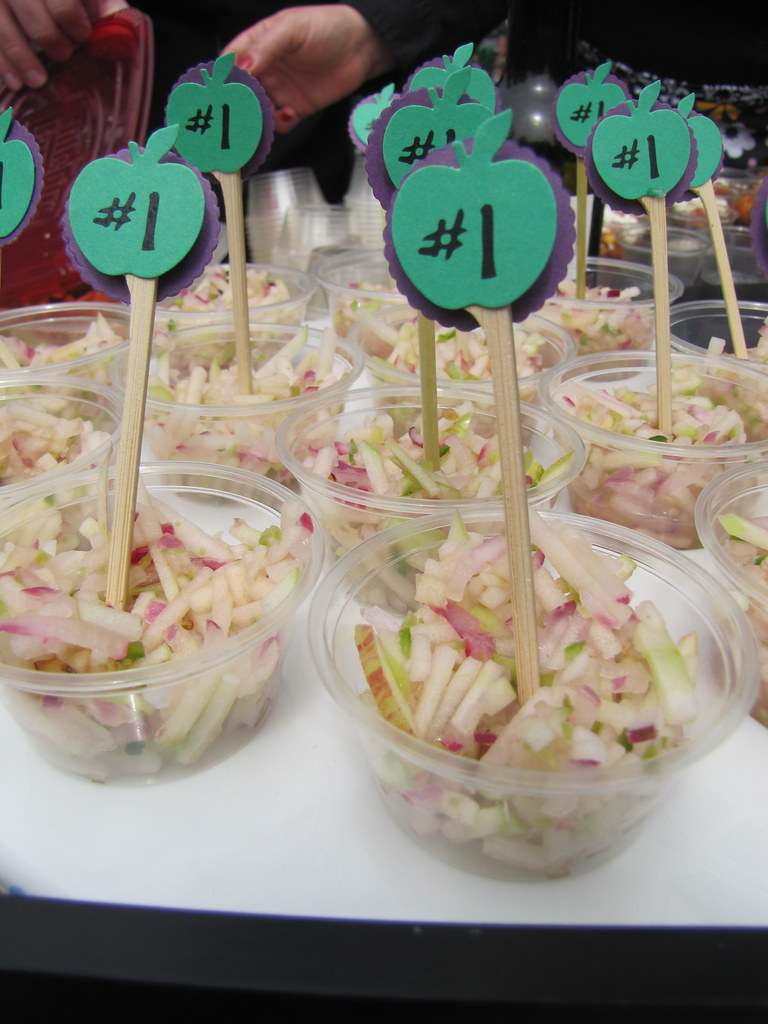 a salsa with julienned Gravenstein apples, a Sonoma County specialty 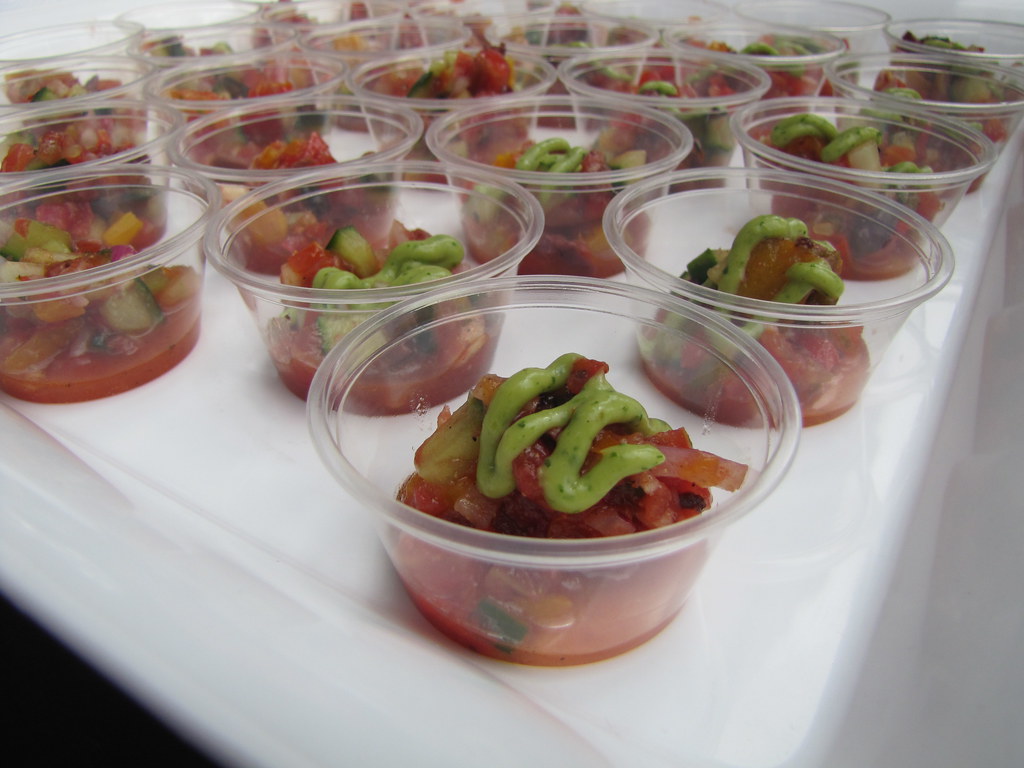 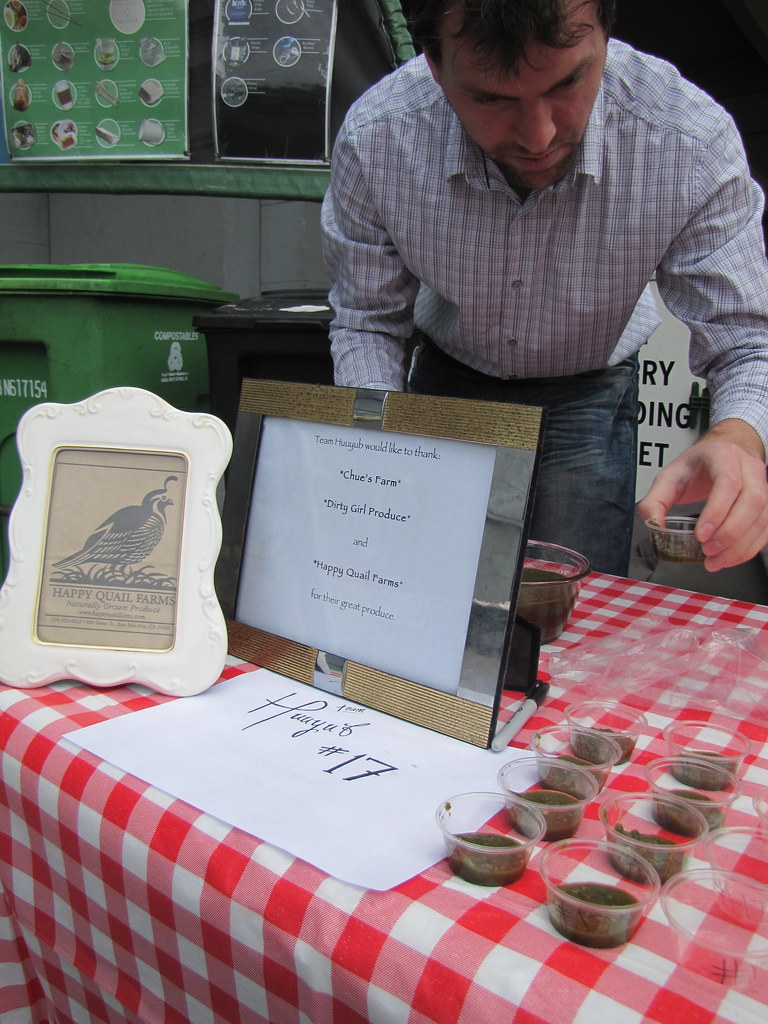 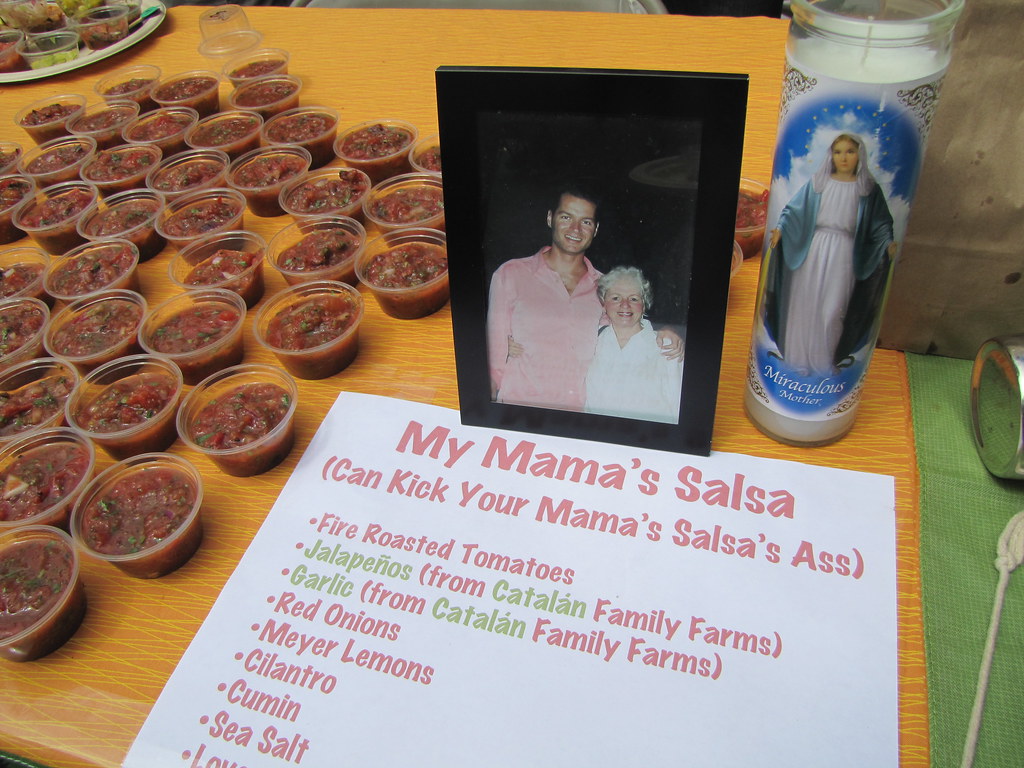 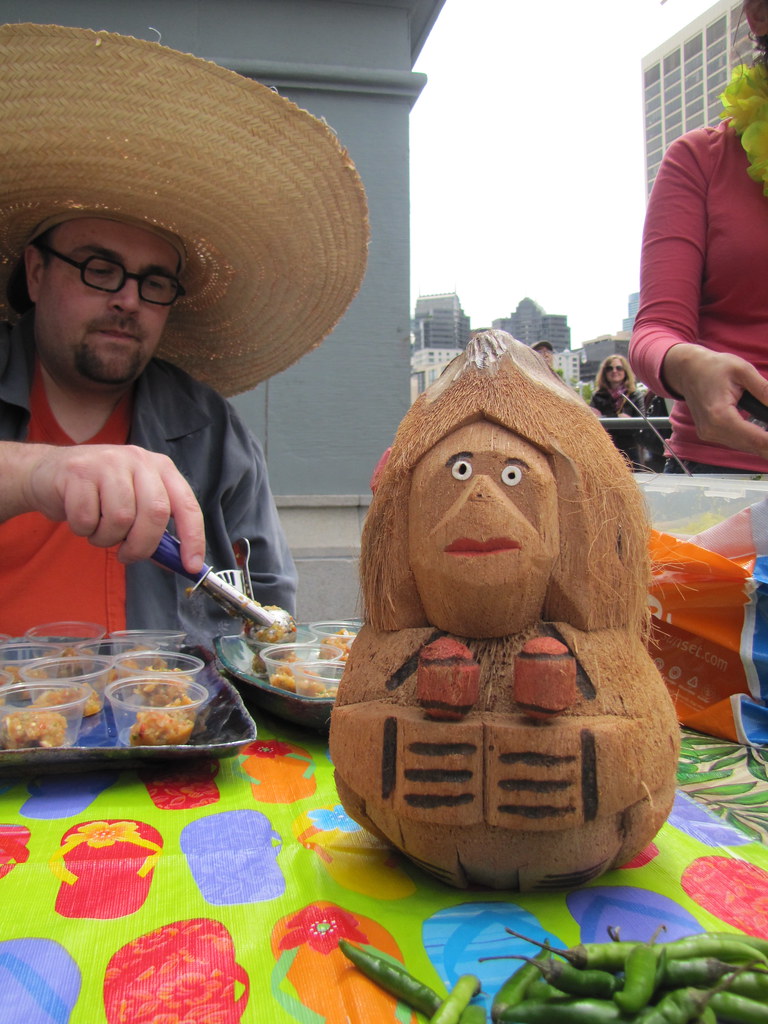 I got to taste them all with the other volunteers, and we debated our favorites. Turns out, people look for a lot of different things when it comes to this dip. Some like it smoky, some like it roasty, some like it sweet-forward with fruit, some like it thick, and several liked it with bits of grilled corn on Sunday, too. It’s a totally subjective thing, and by the time I reached the end of the line, I was pretty confused about whatever it was I liked in a salsa — my tastebuds were tingling with all of these and more.

But one salsa that really struck me was perhaps one of the simplest. It was the kind of thing that I just wanted to keep dipping my chip into, and could see myself doing for hours at length at a party. It was Team Hellepenos’ “Salsa Delfina,” named after the brother-and-sister team’s great-grandmother, upon whose recipe it was based. It was just so bright-tasting with good, red tomatoes and lime, and there was enough finely chopped cilantro swimming in the juices to make it half-green (pictured at top). 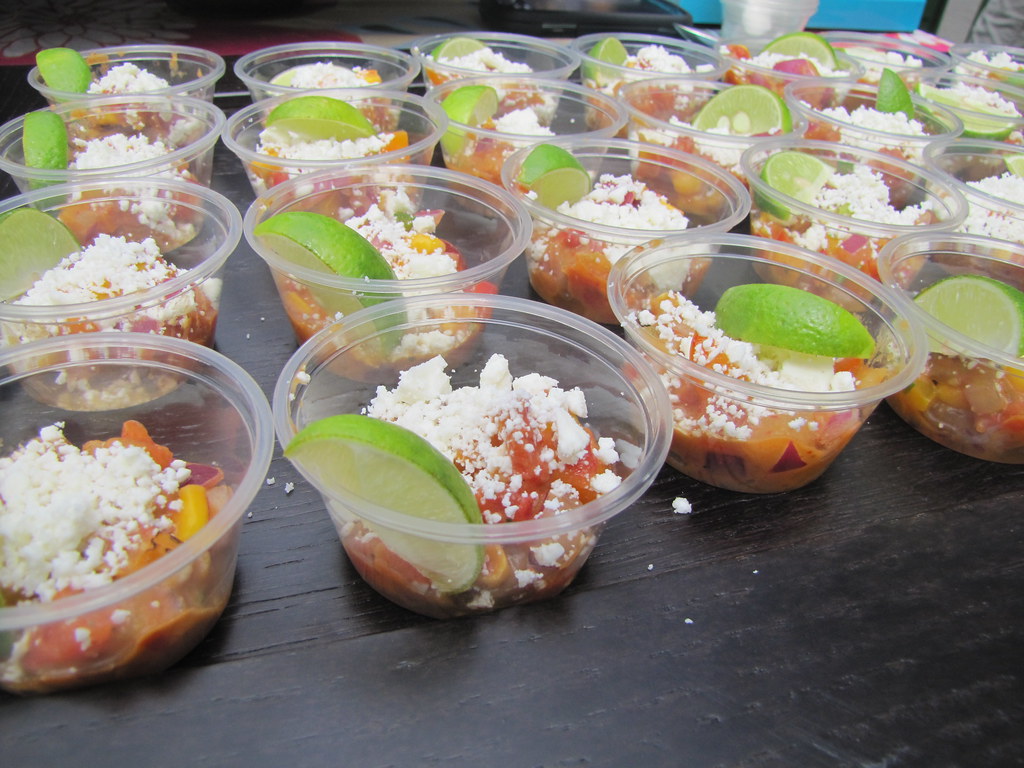 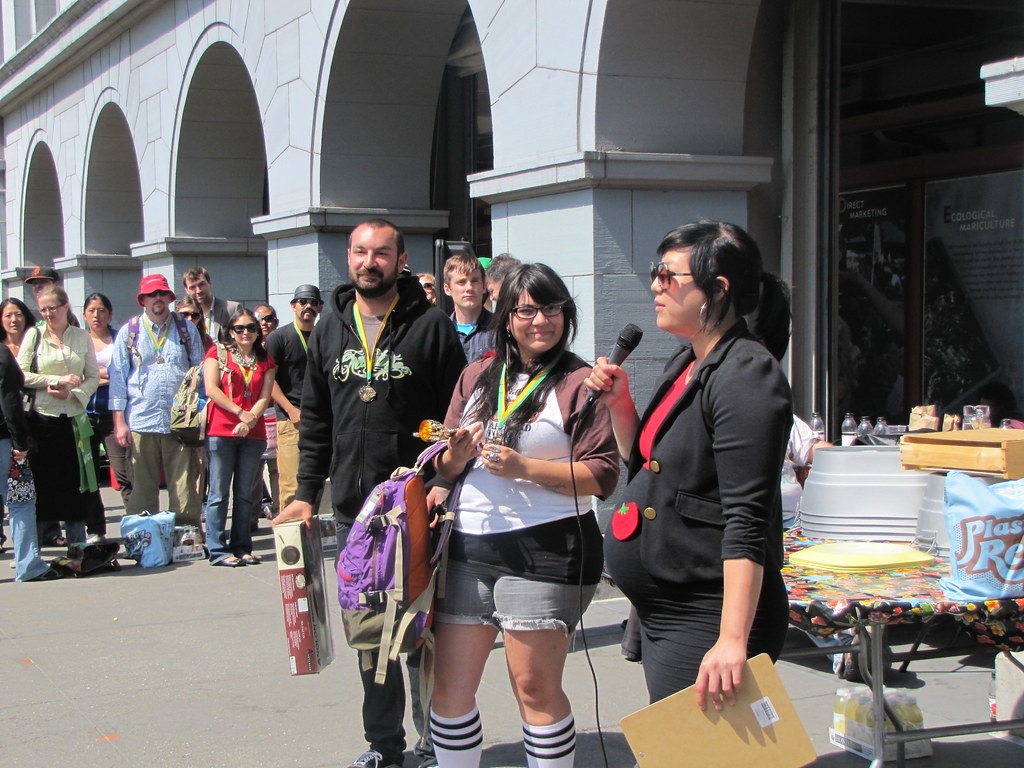 and the winners of the people’s choice 1st place vote

I voted for this salsa, not really thinking it would be flashy enough to win. But lo and behold, when all was said and done — sponsors thanked by Jeannie, and judges introduced — Salsa Delfina won the biggest award of the day, the audience vote’s number one choice! In the judges’ category, four local food experts decided upon Team DoomBunny en Fuego’s “Ceviche Verdura,” another great red salsa topped with sharp cotija cheese and lime (no fish added; the name was a creative way of describing the vegetables’ good soak in lime juice).

For the full list of other winners from this event and photos, see the SF Food Wars’ website. As a newcomer, I’m afraid I can’t say much about the contestants and their concoctions as I’d like, but I’m taking notes on salsa-making thanks to them. One good rule of thumb that I was able to extract from both the first-place winning entries: let it marinate, at least overnight. Marry the flavors, and marinate some more. Maybe a pico de gallo will begin to look more like salsa after doing this, too.