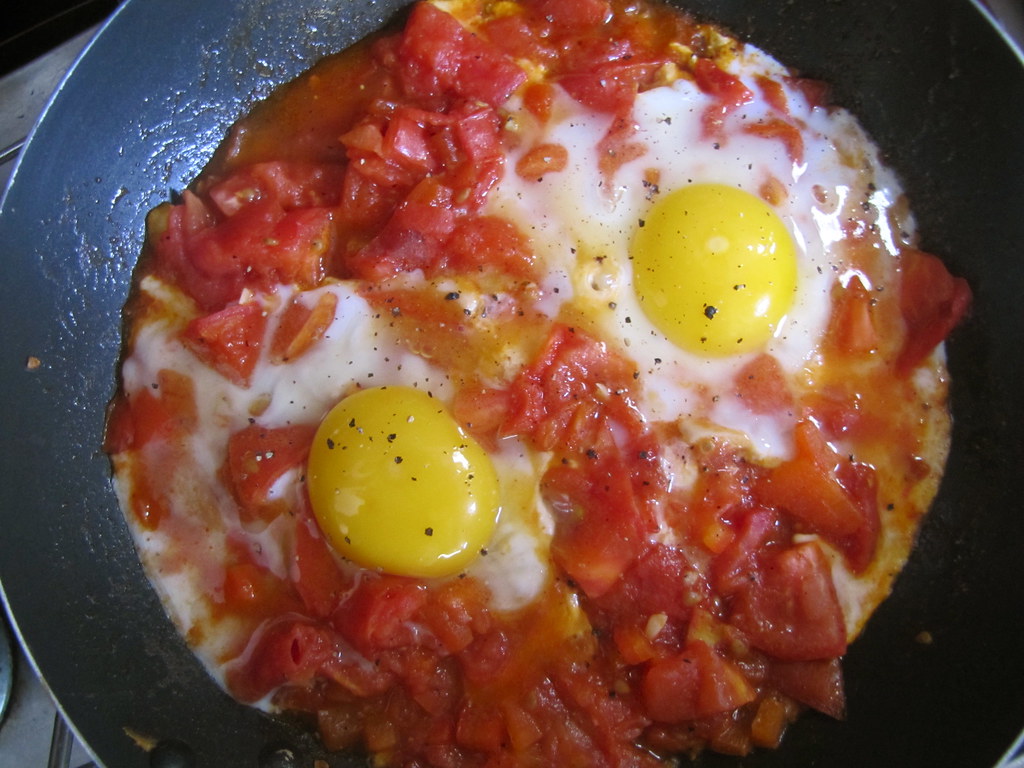 They say shakshouka, a common Israeli breakfast dish, is difficult or taxing to make, or that canned tomatoes are the best option to create a thick and savory sauce. But it was the first thing I could think of to whip up when I could find little else but ripe tomatoes and fresh eggs in the icebox one morning last week. I don’t mean that in a nostalgic way, using the word, “icebox” — for the past couple weeks, I’ve been living on a single-hull sailboat docked at the San Francisco marina.


All too often, shakshouka is prepared with canned tomatoes, but as long as they’re in season, juicy, sweet tomatoes straight from the farm can make for a fresher-tasting version of the hearty staple, enhanced with more minimal spices. Broken down to a thick ooze in a pan with garlic and roasted peppers, raw eggs are placed in to poach, and that’s it. It’s also great to sop up with a slab of good, crusty, San Francisco sourdough bread, which is always “in season” around here. 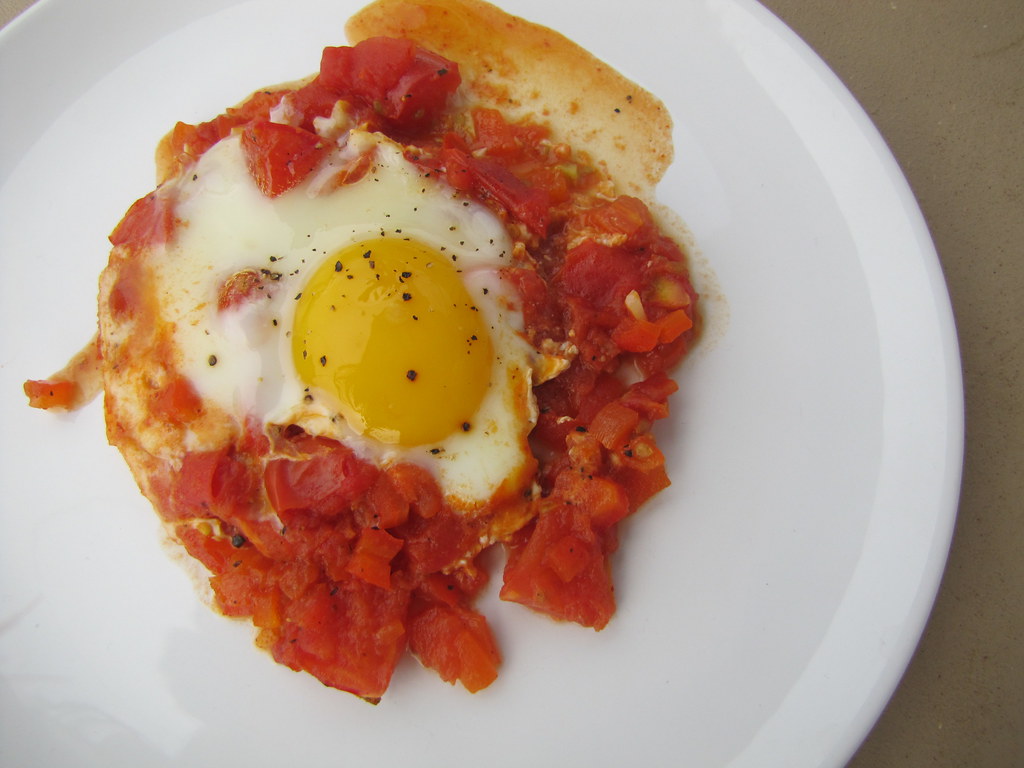 Because the eggs are poached directly in the spiced tomato-based sauce, shakshouka is a practical one-pot breakfast, dinner or lunch. And I can appreciate that, cooking in such tight constraints as a boat with only one working stovetop burner. (Apparently its twin burner and oven both went kaput after an accident with an espresso maker, which I was not part of.) 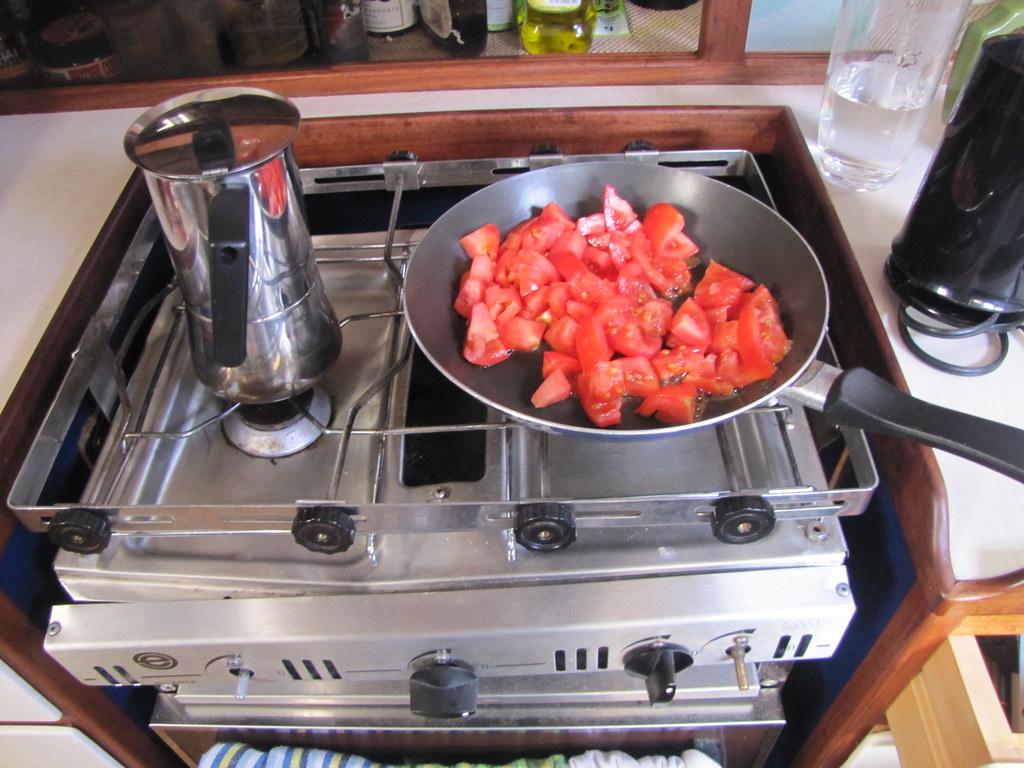 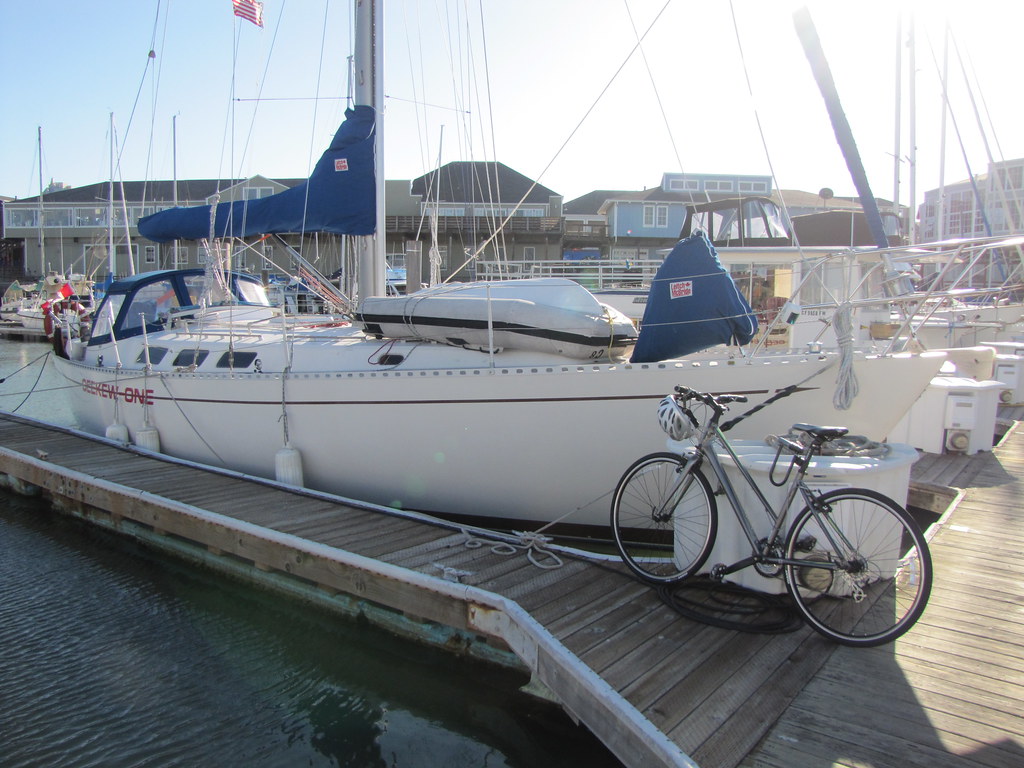 the interior stove and exterior of my temporary home

The boat is owned by someone whom I’ve never met, but one of his crewmates, Jenna, has been staying on board and keeping watch of it while he’s been gone. I met Jenna through a mutual friend, and for no good reason, she’s been letting me stay and play roommate on the boat. I just hope that the meals I’ve been able to whip up inside this thing can attempt to earn my keep. And outside it, too; the boat has an outdoor grill on the deck, which I recently used to grill a butterflied fish and some vegetables. 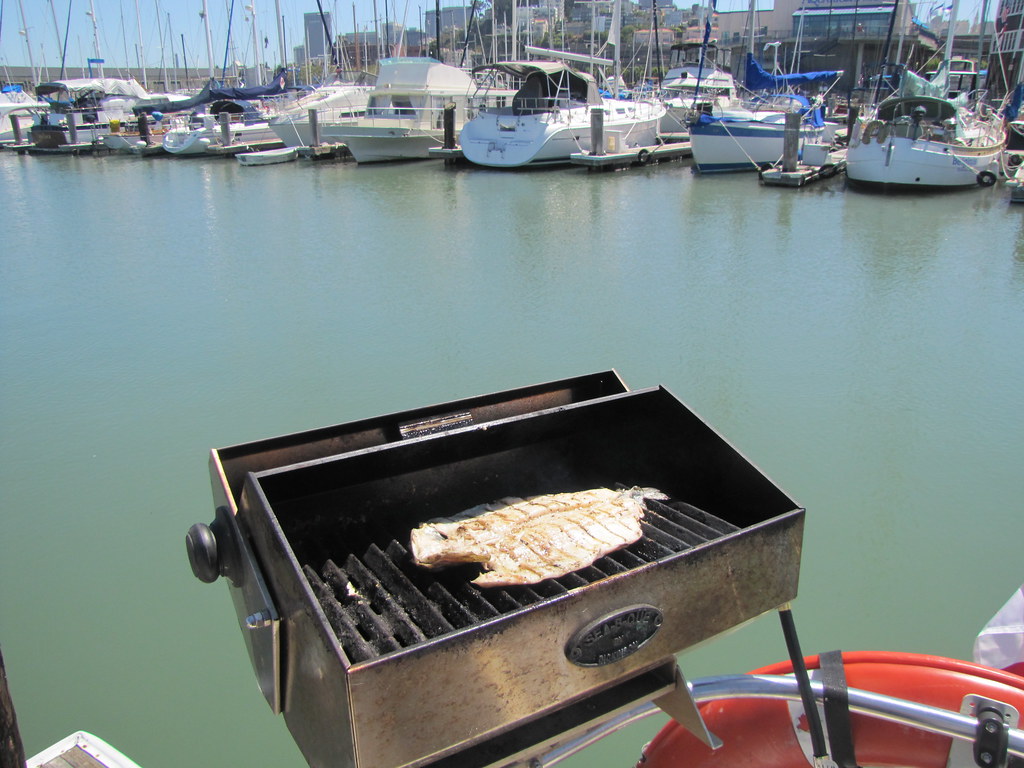 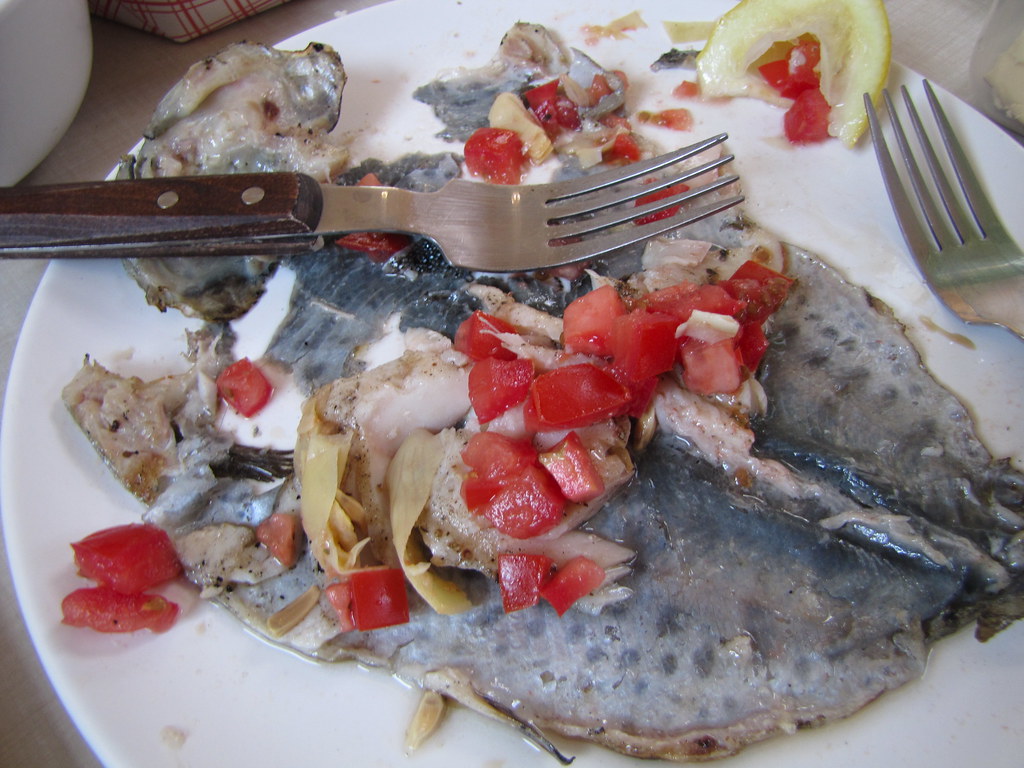 a trout fillet gets grilled on the dock, and topped with tomato and artichoke

So if you can make it here, you can certainly make shakshouka anywhere, I’m convinced. Over a campfire, on a grill, or anywhere there’s an open flame and a wide saucepan — just not in a microwave. I was able to roast a red pepper for this dish, too, by holding it with tongs directly above the gas flame of the stove. The pepper is rotated until its skin was blackened and crispy all over (which you can just as easily do on your range at home). 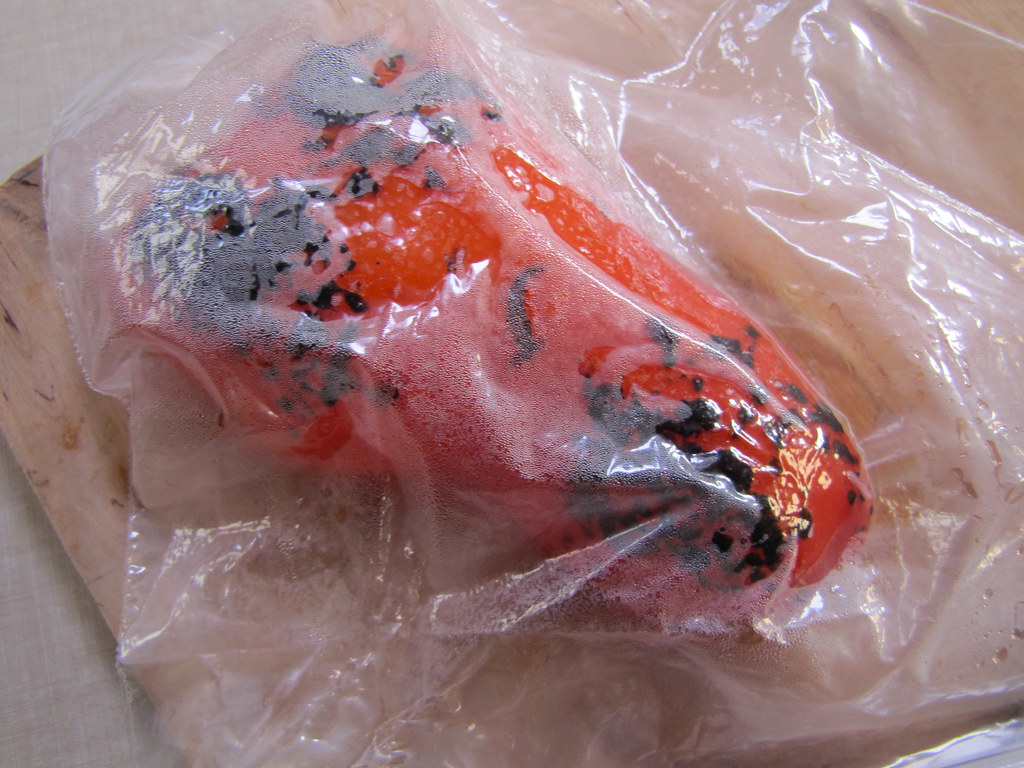 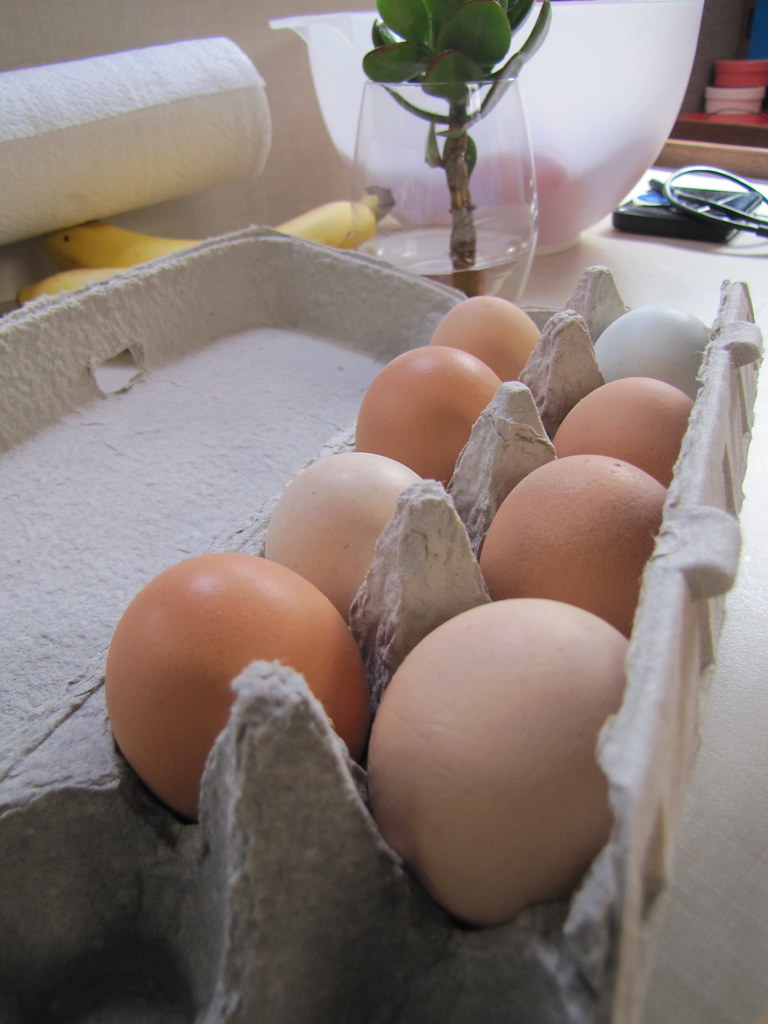 extra-large eggs from the farmers’ market

After being placed in a plastic bag a few minutes, the pepper’s skin shrank back from the flesh and easily peeled off with the help of a knife. The chopped roasted peppers add to a slightly spicy flavor in the tomato sauce. For the remainder of the spices, I was a bit at a loss; shakshouka usually involves paprika or chile powder for a hint of spice, and a dash of coriander sometimes. Well, I rummaged around in the “pantry” shelf of the boat, and came across a canister of stuff called “salmon rub.” The sailors had evidently had some tasty meals while out on the open sea. I looked at the ingredients, which were comprised of brown sugar, chile, cumin and salt, and gave it my seal of approval for this dish. 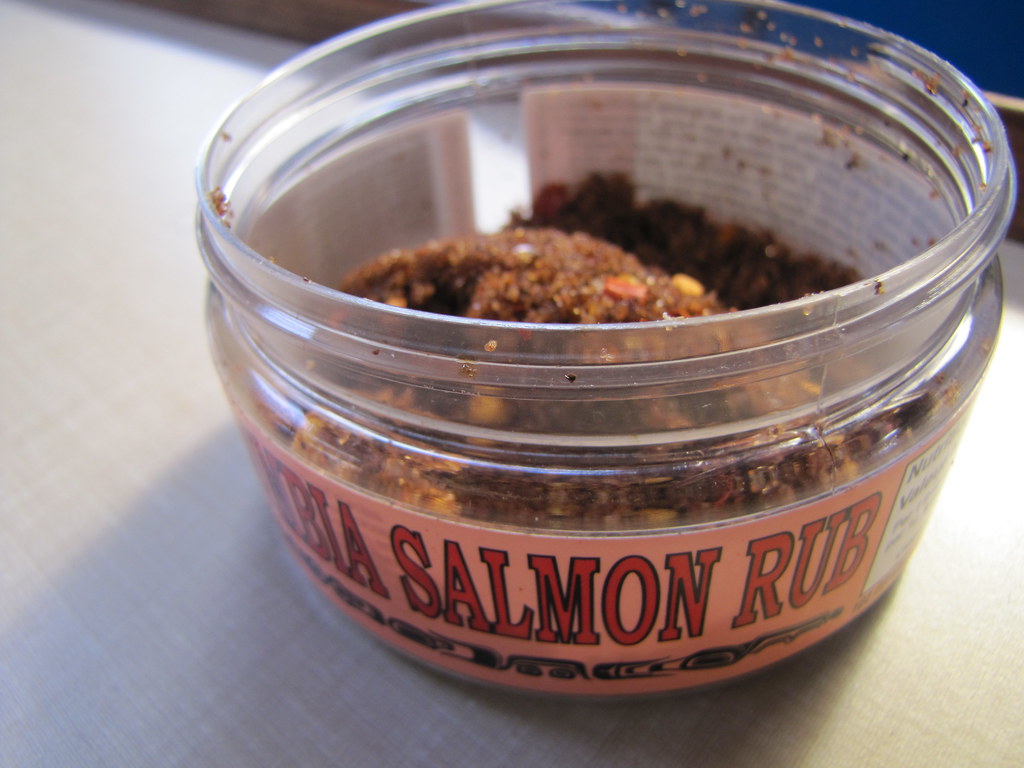 It came out great.

Heat the olive oil over medium-high on a wide saucepan or skillet. Add the garlic once fragrant (a few seconds later), add the tomatoes and a pinch of salt. Cook, stirring occasionally, for 5-10 minutes, or until juices have pooled and chunks have mostly broken down.

Meanwhile, hold pepper with tongs and carefully blacken all sides of it by holding it over an open flame. Once sufficiently blackened and crispy, transfer pepper to a plastic bag and seal shut. Let sit for 5 minutes to soften the skins. Remove from bag, and once cool enough to handle, gently peel or scrape off the skins and discard. Finely chop the pepper and remove any white pith.

Add the chopped roasted peppers to the tomato sauce, along with all the spices and continue to cook another 5-10 minutes, stirring occasionally. Taste for seasoning, adding any salt or spices as desired. Gently break the eggs one at a time and place them close to the center of the pan in the eggs (or where it’s most hot). Reduce heat to medium-low and let the eggs poach uncovered until whites have turned opaque, about 6-8 minutes. Carefully transfer to serving plates and enjoy with bread.