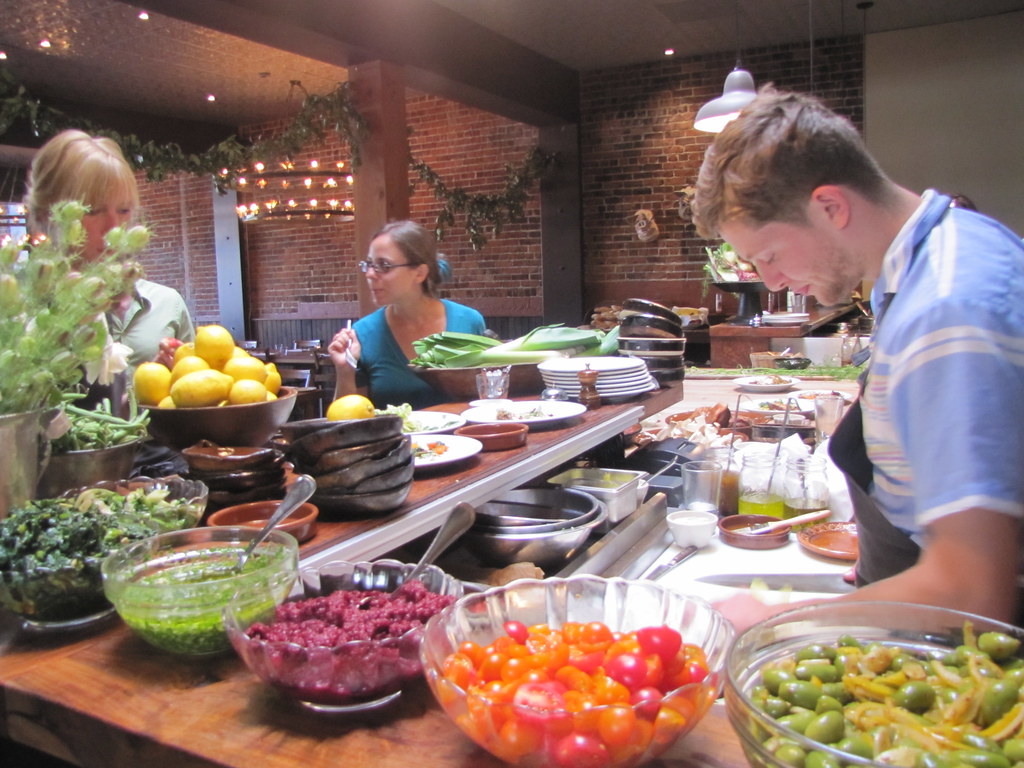 I’m getting spoiled by all the good produce in the West Coast. Not that the farmers’ markets and CSAs of the Northeast don’t have their own charms (harvest time for Upstate NY apples, the best ever, is just around the corner) but the abundance of colors and flavors out here can have a kaleidoscopic effect. My first instinct was to cook as much as I could in California — but how does one do that without a solid home and kitchen? I’ll fill you in on a little secret I’ve been grateful to have discovered: sneak into the best restaurants by staging there instead.


Pronounced with a short “A” so that it rhymes with “lodge,” and not “cage,” to stage is a restaurant term meaning to intern for just a short term, like one night. And since I’ve been out West, I’ve gotten to stage at three excellent restaurants thanks to the kindness of chefs and mutual friends. It’s allowed me to explore a whole lot more from their menus than the few items I could afford had I just gone there to eat, and combined, a much more intimate glimpse at the Bay Area’s brand of cuisine. And I’m totally into it. 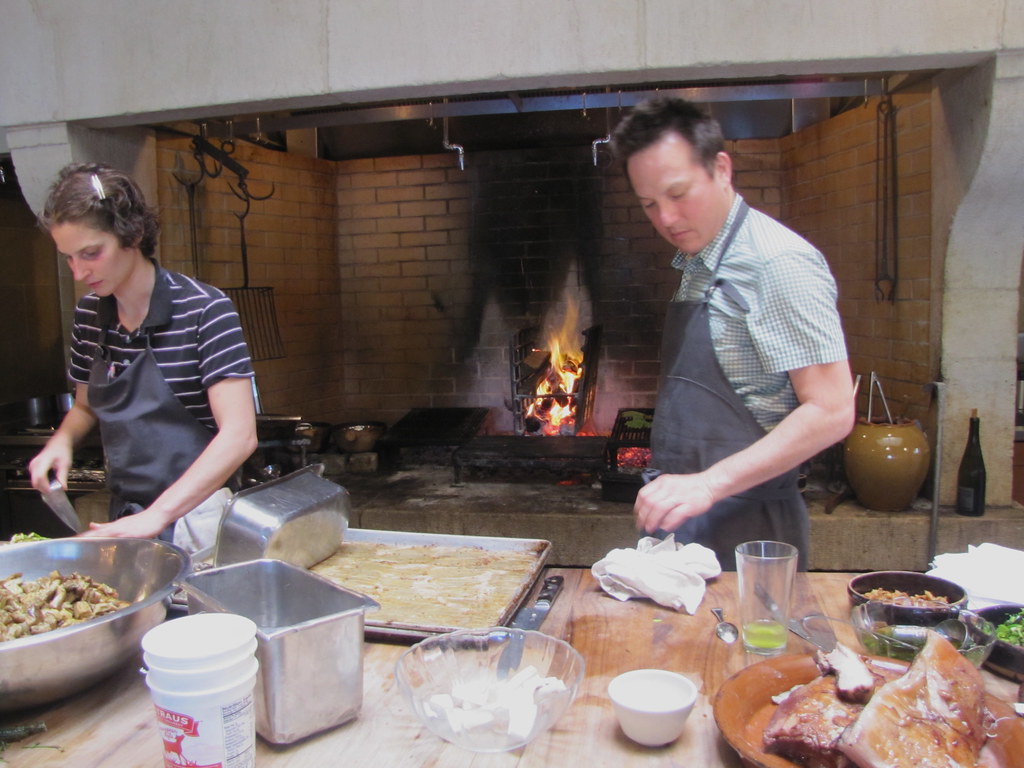 a homey, brick hearth is the focal point of Camino’s open kitchen

I overheard a conversation while staging at Camino Restaurant in Oakland that its chef/owner, Russ Moore, had once said to a reporter, “The thing about California cuisine is that we don’t have a lot of fancy technique; we just do some really good shopping.” And when I arrived there to stage one Saturday night, he had just come back from a two-hour trip to two farmers’ markets, to bring back the goods. The head cooks sat around a table shelling fresh black-eyed peas from the pods as they planned the menu for the night. (Since opening three years ago, Camino has had a different menu every night.) I got to join in the shelling and listen on, and would continue shelling these beans intermittently throughout the night. 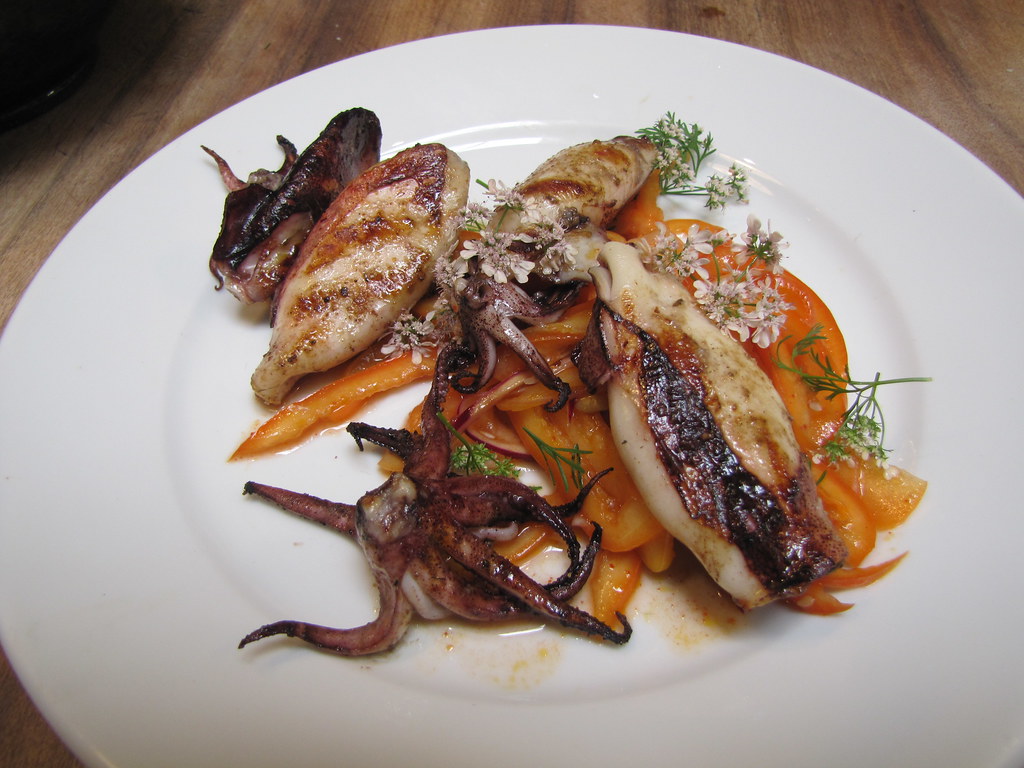 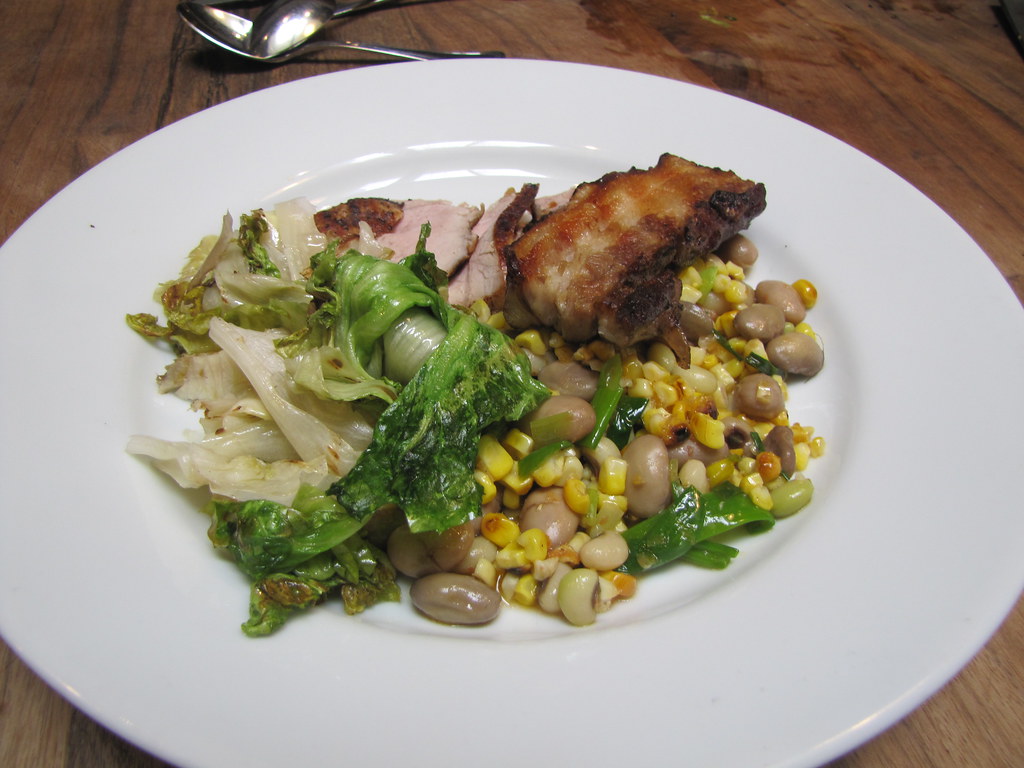 
The menu was amazing, as it turned out. The highlight might have been a whole petrale sole that was fired in a wood-burning oven until the skins crackled and puffed up like pizza dough on top. Camino adamantly never makes any pizza in this oven, however, wanting to offer diners something they couldn’t find anywhere else instead. The other dishes were just as unpredictable, and delicious — an appetizer of coagulated, breaded and deep-fried pig’s head with endive and beet puree, pork leg and braised pork belly both in one entree with fresh corn and beans, and grilled trumpet mushrooms with a beautiful spring onion sfogato, or souffle-like custard that was slightly browned on top thanks to its being placed next to a blazing wood fire. 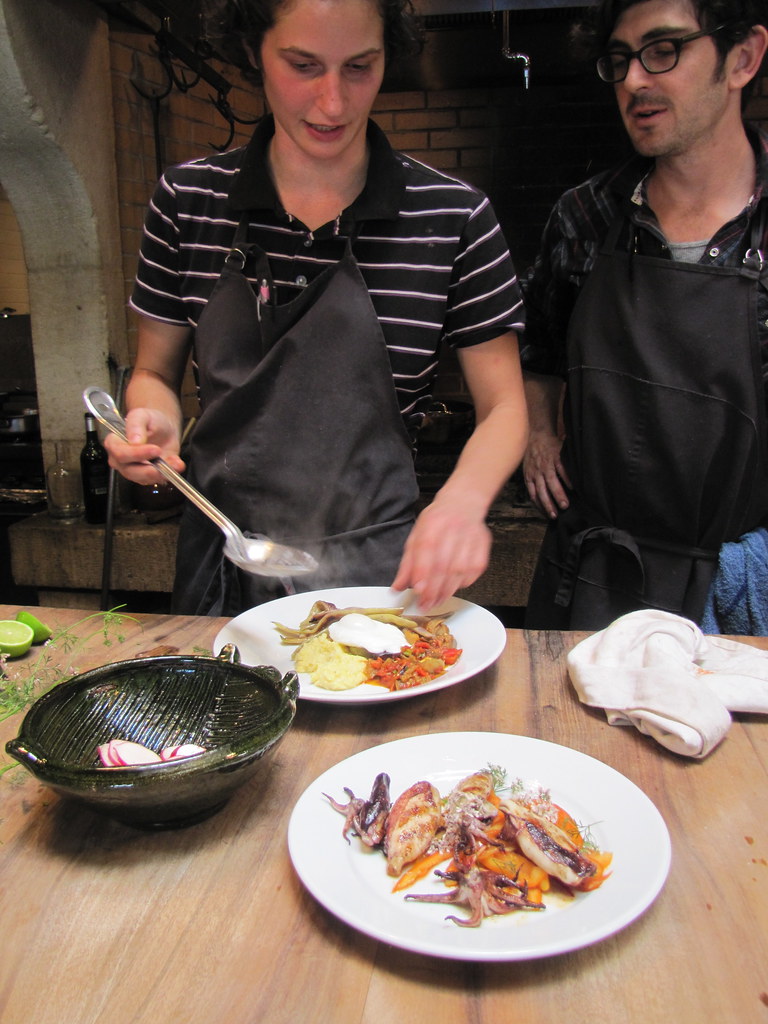 sous chef Melissa plates the ratatouille with a poached egg 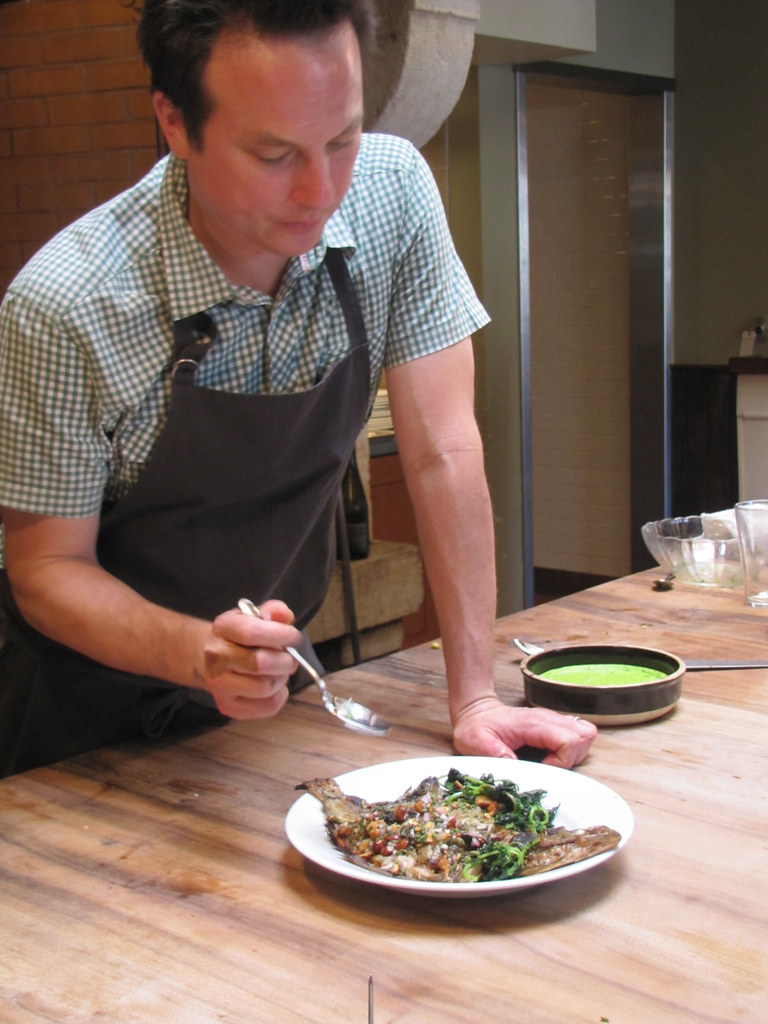 Clearly, Russ was selling himself short by saying the restaurant didn’t boast much technique. But I can see where he was going with that comment. As a former cook at Chez Panisse of twenty years, Camino seems to have expounded on its ethos of using only good ingredients sourced responsibly. While showing me the wine and liquor cabinet, Russ explained that all the wines were organic or biodynamic, and even all the hard alcohol served could be traced to known, non-GMO grains. (They didn’t serve vodka drinks for a while at first.) Some restaurants claim to use local and organic produce and meats “whenever possible” on their mission statements, but Russ sees this as a requisite. And proves it is possible. 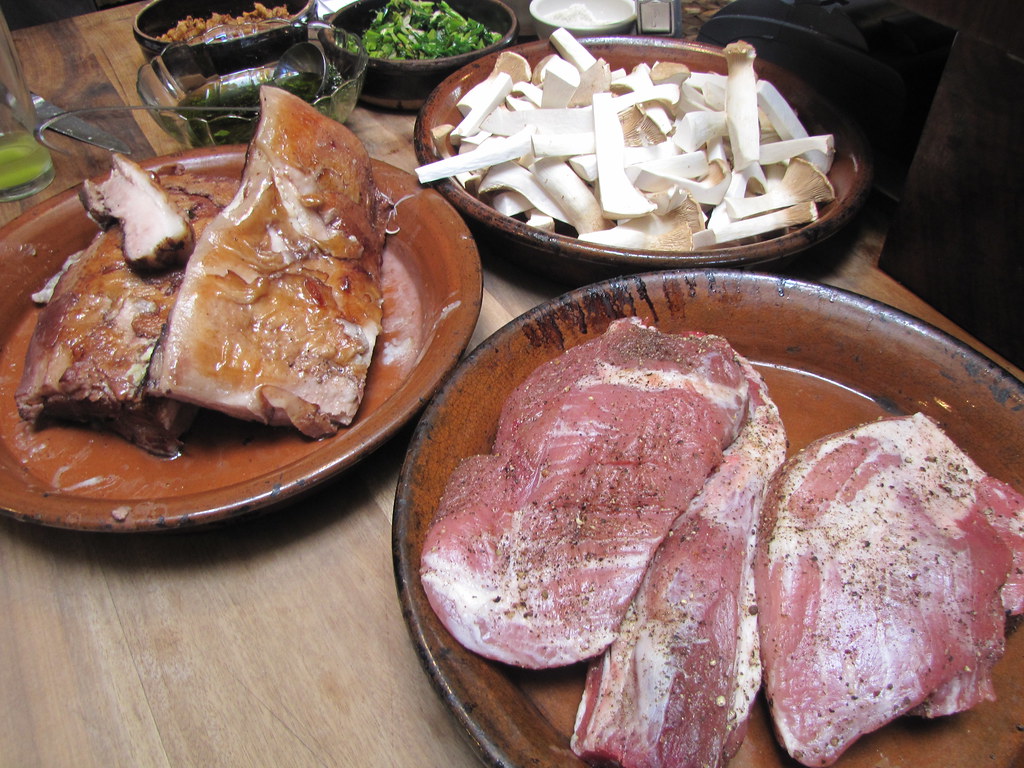 mis-en-place at the open kitchen 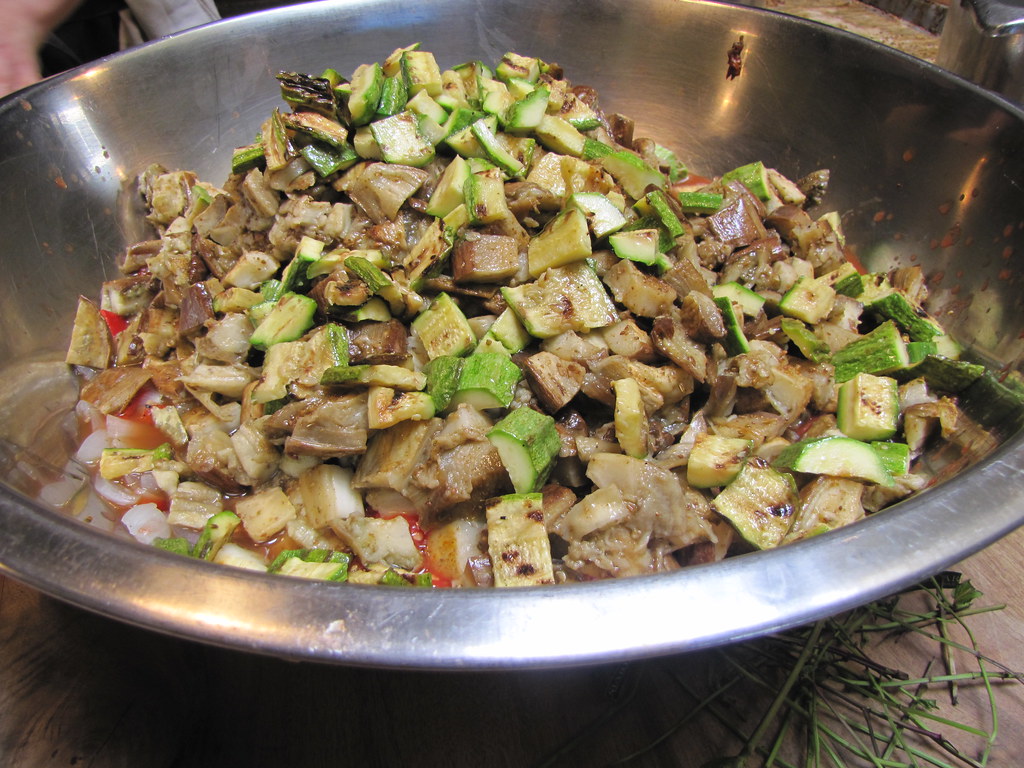 My one-day stint at Camino was inspiring, to say the least, and I hope to somehow help trickle back some of it with my community in Brooklyn. Like the impressive family meal, which was enjoyed by the staff at the end of the night. As service was winding down for the night, the cooks managed to prepare a feast that included most of the dishes featured on the menu that night, and special add-ins, like a home-cured corned beef tossed on the grill. Everyone on staff got to sit down at the almost-empty dining room and have a glass of wine as they shared in the grub (including myself, though I’m sure my bean-shelling was much less deserving of this reward).

You can’t stage everywhere and you probably can’t make too much of a habit of it, but I’m already sniffing out my next restaurant to cook at, hopefully, and hope to share more of those tales. Meanwhile, planning a big dinner for my last week in San Francisco, with all the produce I can’t seem to stop purchasing!